Bernie Sanders: In the Footsteps of Eugene Debs? 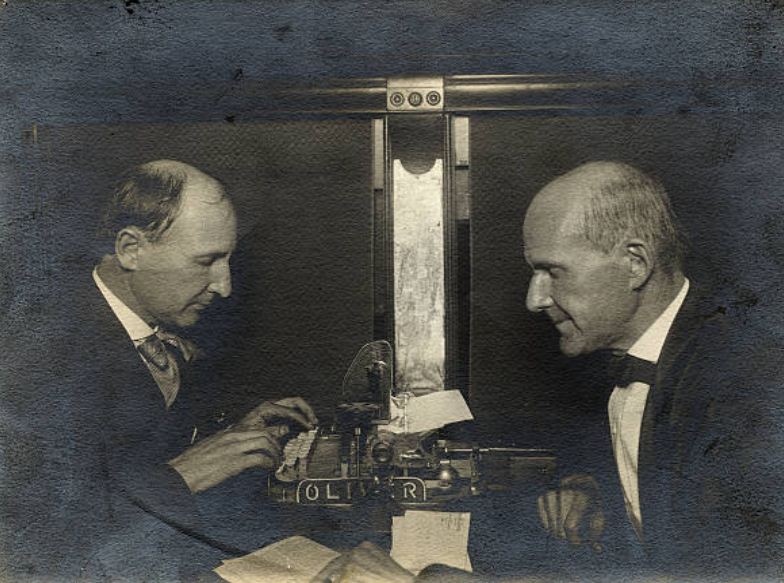 Eugene Debs dictates while his younger brother Theodore
types a letter on an Oliver typewriter.
Today’s Guardian Weekly declares on its cover, “The Ascent of Bernie: How Sanders rose above the Democrat pack”. This follows the Vermont senator's dominating performance in Nevada last week. It certainly seems as if Sanders, like Eugene Debs before him, is the man they can’t hold down. Mind you, I don’t expect Sanders, at age 78, will ever manage to emulate Debs’ effort in standing for the presidency a staggering five times. 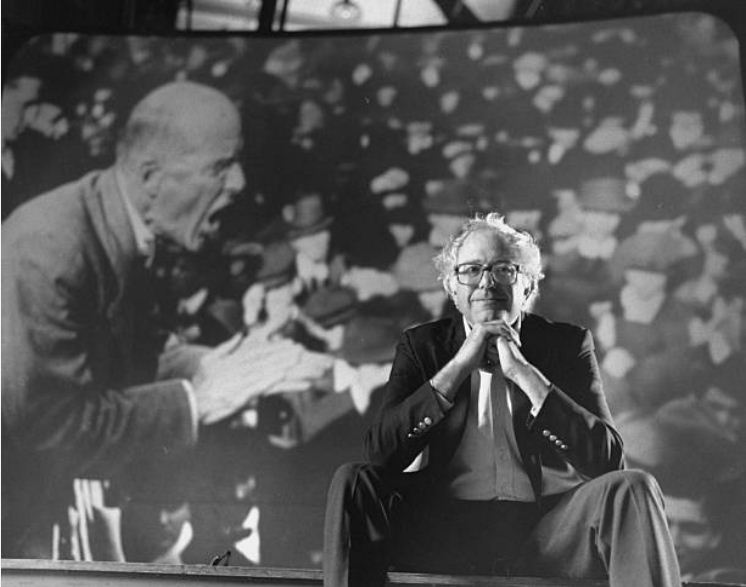 A much younger Sanders at a Debs exhibition.
Just over a year ago The New Yorker published a 4347-word “A Critic at Large” article from historian Jill Lepore titled “Eugene V.Debs and the Endurance of Socialism: Half man, half myth, Debs turned a radical creed into a deeply American one”. In it, Lepore pointed out, “Socialism has been carried into the 21st century by way of Sanders, a Debs disciple, and by way of the utter failure of the two-party system. Last summer [2018], a Gallup poll found that more Democrats view socialism favorably than view capitalism favorably.” 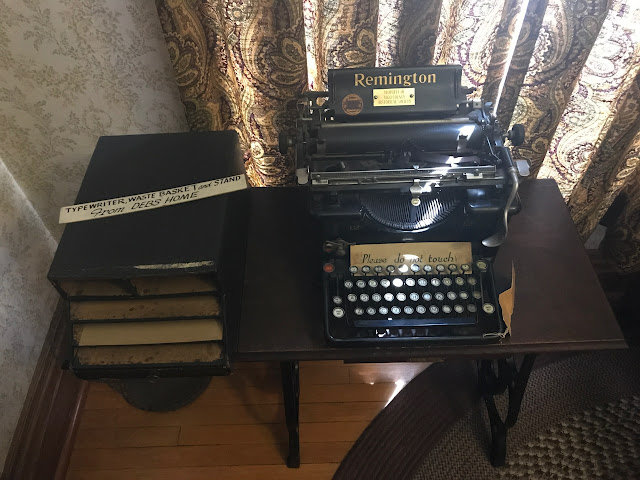 A Remington typewriter at the Eugene Debs House in Terre Haute.
Saunders’ fasincation with Debs goes way back, wrote Leport. “The most delightful way to hear Debs is to listen to a recording made in 1979 by Bernie Sanders, in an audio documentary that [Sanders] wrote and produced when he was 37-years-old and was the director of the American People’s Historical Society, in Burlington, Vermont, two years before he became that city’s mayor. In the documentary - available on YouTube and Spotify - Sanders, the Brooklyn-born son of a Polish Jew, performs parts of Debs’s most famous speeches, sounding, more or less, like Larry David. It is not to be missed.” 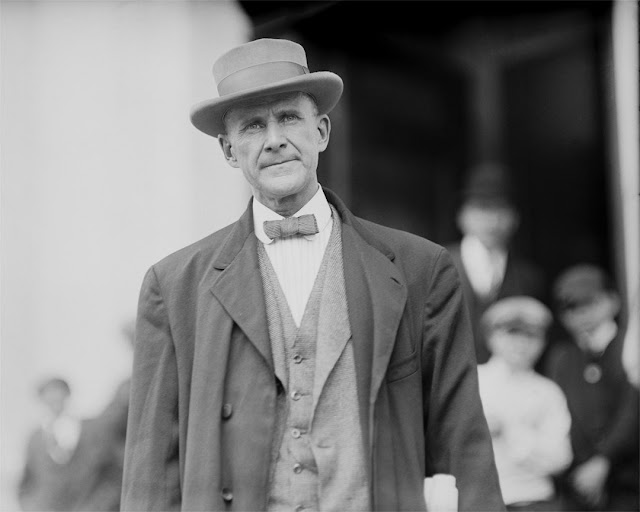 Among the Debs speeches Sanders recorded was the one in which Debs spoke out against World War I soon after the US became involved in 1917. “I am opposed to every war but one,” Debs said. “I am for that war with heart and soul, and that is the world-wide war of the social revolution. In that war I am prepared to fight in any way the ruling class may make necessary, even to the barricades.” As a member of the Senate in 2010, Sanders repeated Debs’ sentiments. “There is a war going on in this country,” he declared in a speech of protest that lasted more than eight hours. “I am not referring to the war in Iraq or the war in Afghanistan. I am talking about a war being waged by some of the wealthiest and most powerful people against working families, against the disappearing and shrinking middle class of our country.”

Eugene Victor Debs was born in Terre Haute, Indiana, on November 5, 1855. This is a significant date for many folk in Britain and the old British Empire: it is called Guy Fawkes’ Day, and marks the day in 1605 when Fawkes, a member of the Gunpowder Plot, was arrested while guarding explosives the plotters had placed beneath the House of Lords in London, hoping to kill King James I.  But that was more a religious issue than a social or political one. 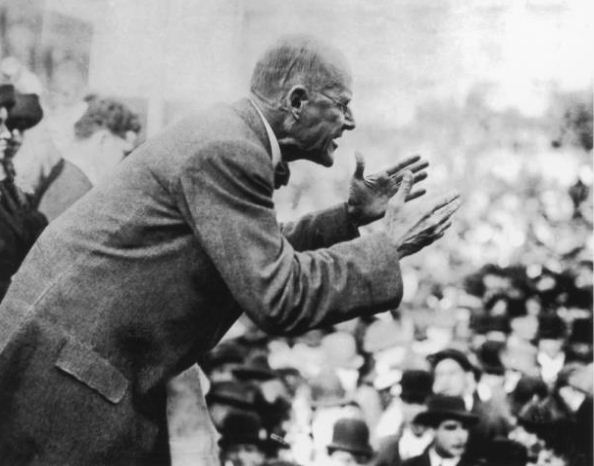 Deb, socialist, political activist and trade unionist, was one of the founding members of the Industrial Workers of the World. Ironically, early in his political career, Debs was a member of the Democratic Party. He was elected as a Democrat to the Indiana General Assembly in 1884. Debs was instrumental in the founding of the American Railway Union, one of the nation's first industrial unions. The 1894 Pullman Strike was ended by Grover Cleveland sending in the Army and Debs was convicted and served six months in prison. 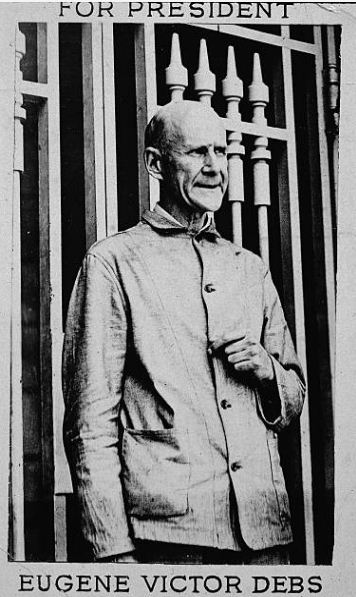 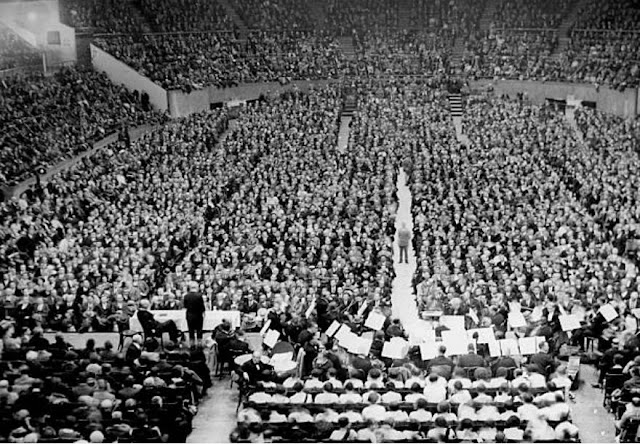 The Eugene Debs Memorial at Madison Square Garden.
Debs’ speech denouncing the US joining World War I led to his second arrest, in 1918. Warren G. Harding commuted the sentence in December 1921. Debs died in Elmhurst, Illinois, on October 20, 1926, aged 70, not long after being admitted to a sanatorium because of to cardiovascular problems that developed during his time in prison.
Posted by Robert Messenger at 16:31

I don't recall the New Yorker article or hearing of Debs.

Very interesting history here. I wonder what Debs would think of Sanders’ rise—or of Trump? I recall that Henry Ford considered running back then (after WW I, I think). Same old, same old. Moneybags vs. the Unionist.