‘We are a people. A people do not throw their geniuses away. If they do, it is our duty as witnesses for the future to collect them again for the sake of our children. If necessary, bone by bone’
- Alice Walker, author of The Color Purple, 1976. 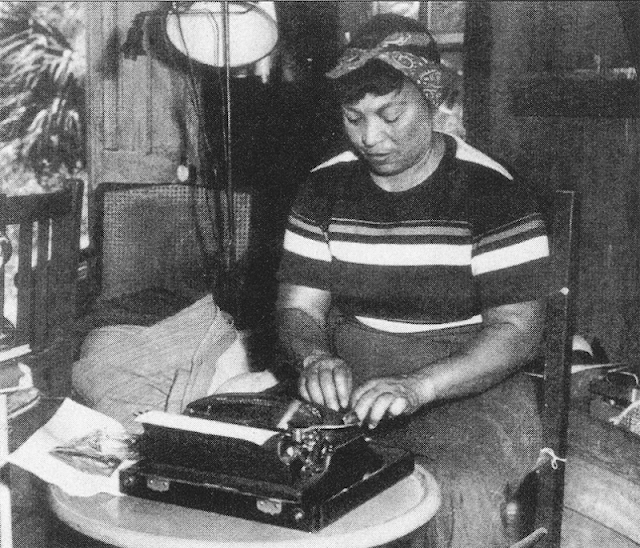 Zora Neale Hurston at her Remington 5 portable typewriter in her cottage at Eau Gallie, a section of the city of Melbourne, Florida, in 1956. The photo was taken by the Saturday Evening Post, for whom Hurston was articles at the time.
There’s an engrossing article titled “American Chronicles: Rescue Work – The Fight to Preserve African-American History” in the February 3 edition of The New Yorker magazine. The article’s author, staff writer Casey Cep, especially aroused my interest with her mention of novelist Alice Walker finding - in 1973 (Cep dates it to 1977) - the lost burial site of Zora Neale Hurston. It seems odd that anyone would have to “find it”, since Hurston had died only 13 years earlier, in 1960. But she was buried in a then unmarked grave in a then segregated Garden of Heavenly Rest Cemetery in Fort Pierce, St Lucie, Florida.  In the introduction to her March 1975 article in Ms magazine titled “In Search of Zora Neale Hurston”, Walker wrote that Hurston’s wretched resting place was “generally symbolic of the black writer’s fate in America.” 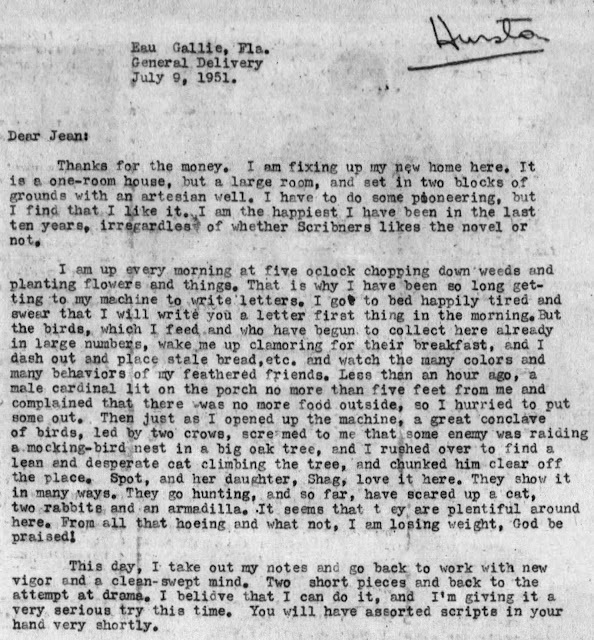 A letter typewritten by Hurston in 1951 to her literary agent Jean Waterbury.
Cep points out, however, that Walker’s discovery “set in motion a revival of Huston’s historically black incorporated home town of Eastonville, which was added to the National Register [of Historic Places] in 1998. That discovery also renewed interest in Hurston’s writing; her books were reprinted and elevated to the literary canon.” 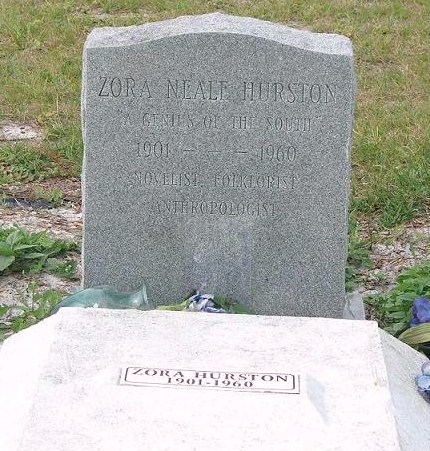 The headstone erected by Alice Walker at Hurston's previously unmarked grave.
Research subsequent to Walker’s quest for Hurston’s resting place found that Hurston was in fact not born in Eastonville, but moved there when she was three. Her real birthplace was the tiny Alabama town of Notasulga. What’s more, she wasn’t born in 1901, but on January 7, 1891, and was three weeks past her 69th birthday when she died. In financial difficulties, Hurston was forced to enter St Lucie County Welfare Home, where she suffered a stroke.  She died of hypertensive heart disease on January 28, 1960, and was buried on February 7, a little more than 60 years ago. Friends from near and far had raised more than $600 for a funeral at the Peek Funeral Chapel, and a 100 of them attended the burial. 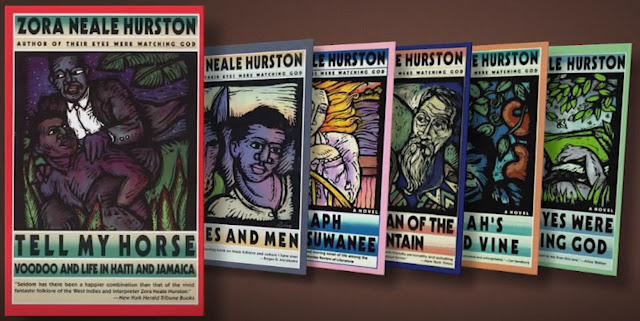 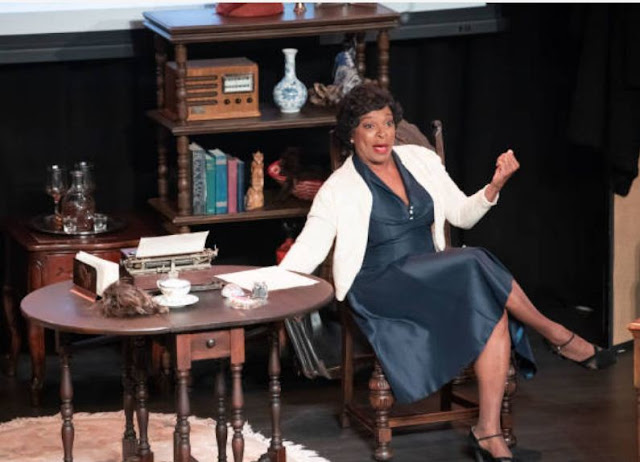 Vanessa Bell Calloway, with a Royal portable typewriter as a prop, plays Hurston at the WACO Theatre Centre in Los Angeles in 2018.


Cep is certainly right about a “renewed interest in Hurston’s writing”. Not only are there 11 of Hurston’s books now in print, but also a collection of her short fiction, Hitting a Straight Lick with a Crooked Stick, was published this year. As well, there have been at least 56 books and collections about Hurston's life and work published in the past 27 years. 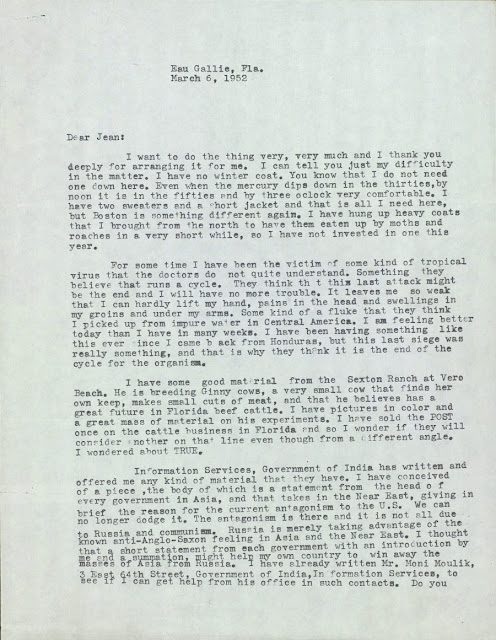 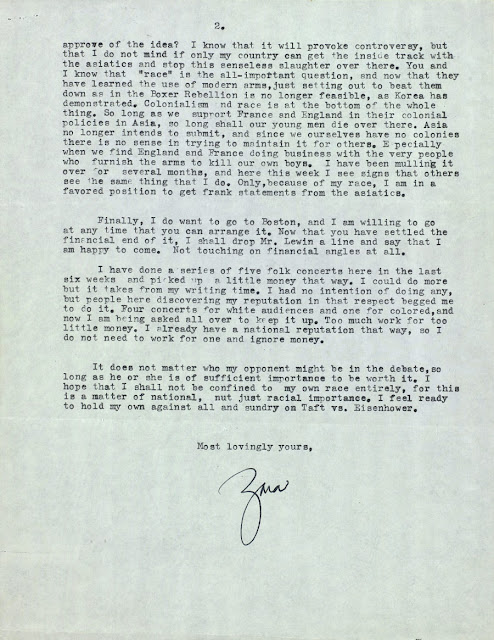 This typed 1952 letter to Waterbury shows Hurston was still at the top of her game, involved in multiple projects but also without a winter coat and recovering from illness. She is looking forward to a follow-up assignment involving a presidential debate. Interested in the candidacy of Republican Senator Robert Taft of Ohio, whom she preferred to Dwight Eisenhower, she had written a piece for The Saturday Evening Post in December 1951 making the case for Taft as having favorable policies toward black voters. She hoped to do “the thing” very much, which was to travel to Boston to engage in a debate over the two candidates. But the main sticking point at that time of year was that she didn’t have a coat. This mattered all the more because she was recovering from a tropical illness probably contracted while doing research in Honduras. But her range of interests and talents is so broad that she is seen simultaneously working on a piece on race relations between the US and Asia for the Indian government, while also gathering “good material” on cattle farming techniques. She writes of the possible controversy during the Korean War, adding that “Colonialism and race is at the bottom of the whole thing. So long as we support France and England in their colonial policies in Asia, so long shall our young men die over there.” Moreover, to make extra money, she was even curating folk concerts.


As well as being one of America’s most significant authors, Hurston was an anthropologist and a filmmaker. She portrayed racial struggles in the early 20th Century American South and published research on Hoodoo. She wrote four novels and more than 50 short stories, plays and essays.  In her early career, Hurston conducted anthropological and ethnographic research while a student at Barnard College and Columbia University. She had an interest in African-American and Caribbean folklore, and how these contributed to the community's identity. She also wrote fiction about contemporary issues in the black community and became a central figure of the Harlem Renaissance. Her short satires, drawing from the African-American experience and racial division, were published in anthologies such as The New Negro and Fire!! After moving back to Florida, Hurston wrote and published her literary anthropology on African-American folklore in North Florida, Mules and Men (1935), and her first three novels: Jonah's Gourd Vine (1934), Their Eyes Were Watching God (1937) and Moses, Man of the Mountain (1939). Also published during this time was Tell My Horse: Voodoo and Life in Haiti and Jamaica (1938). 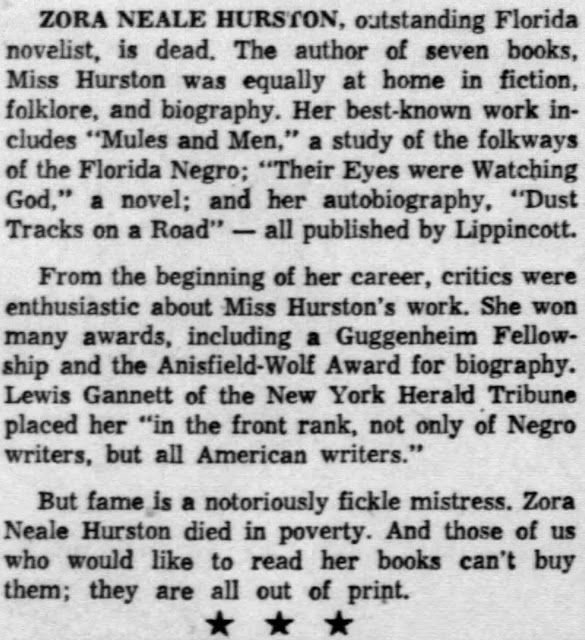 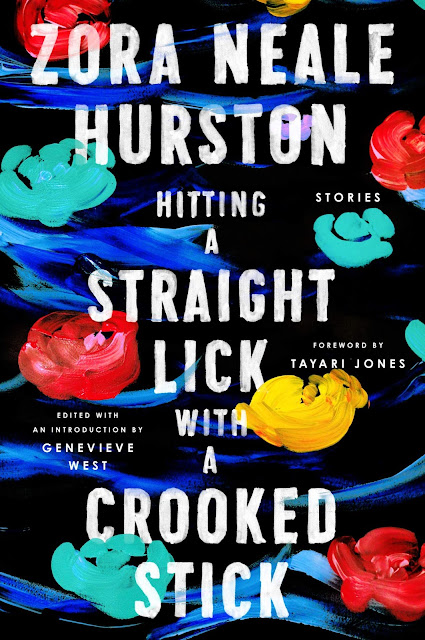 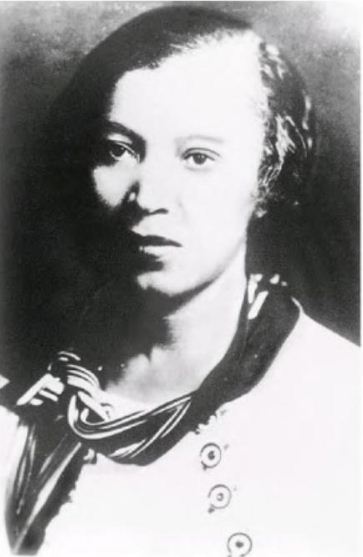 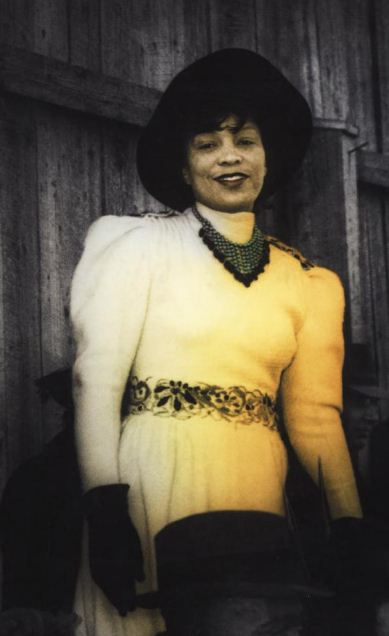 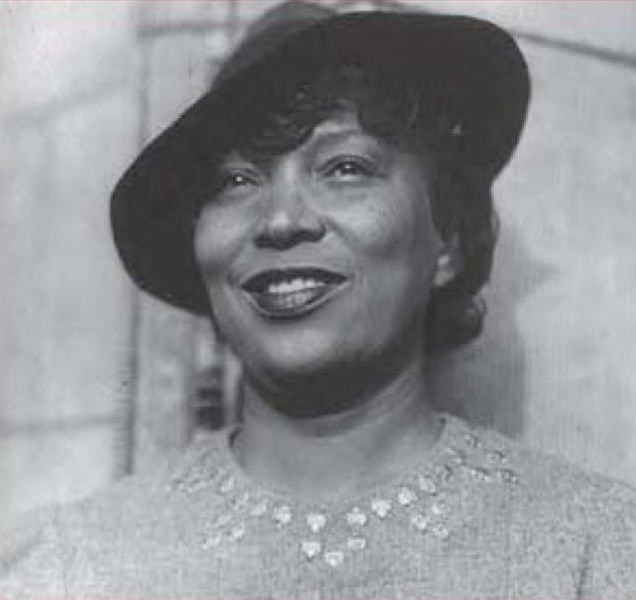 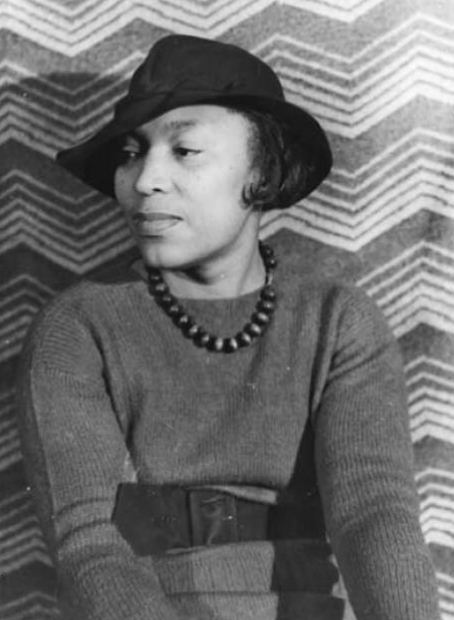 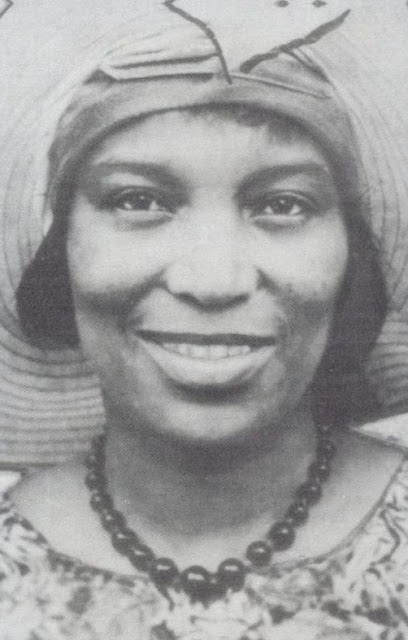 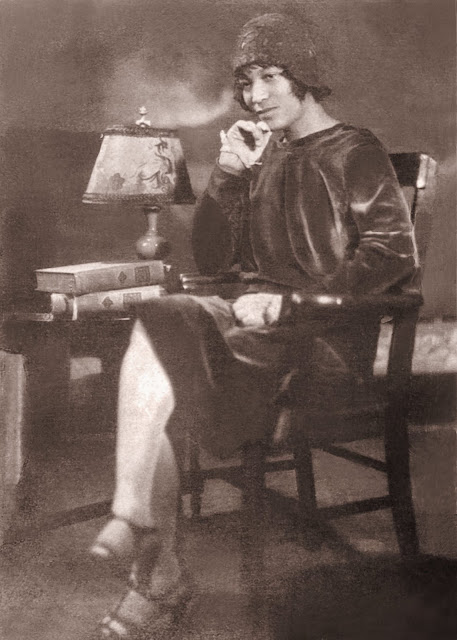 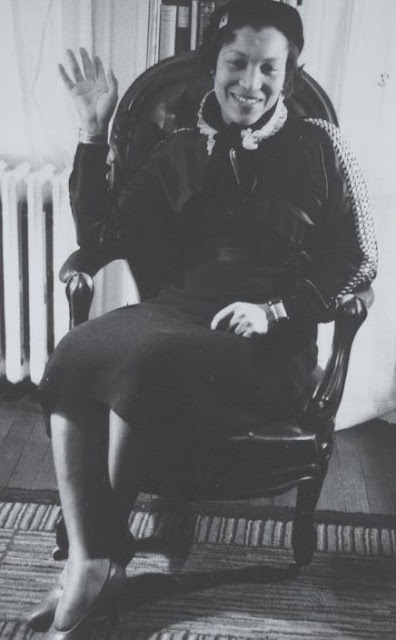 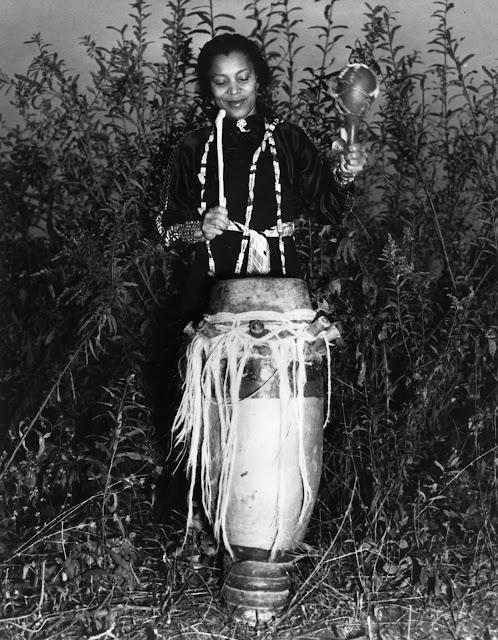 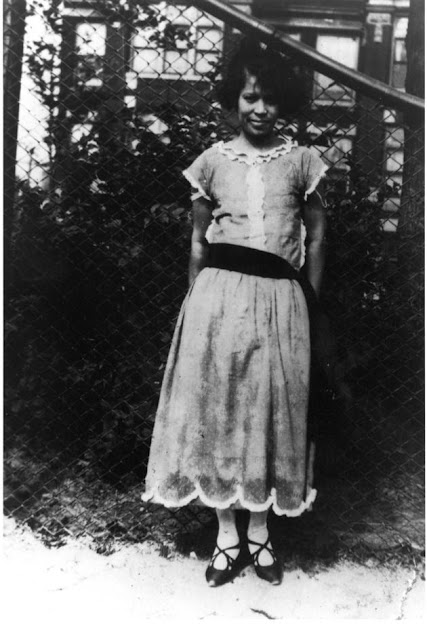 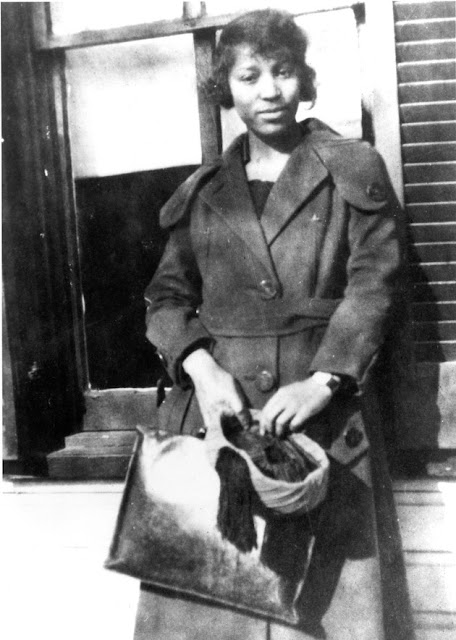 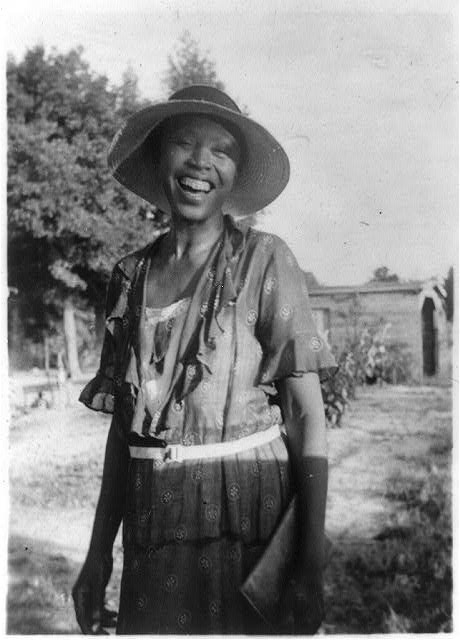 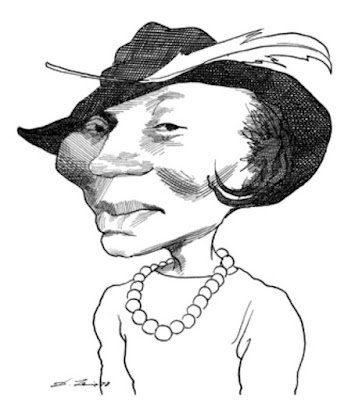 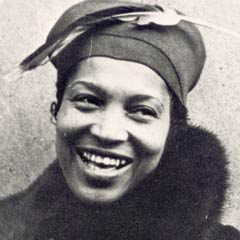 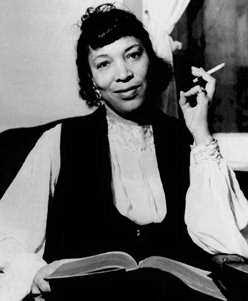 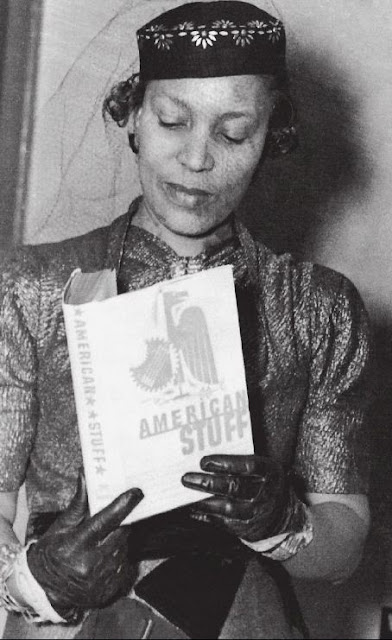 Posted by Robert Messenger at 18:02

Wonderful post Robert. I'm always amazed at your research and all the work you put into posts like this one.