The LIFE of George Silk and the Typewriters He Shot 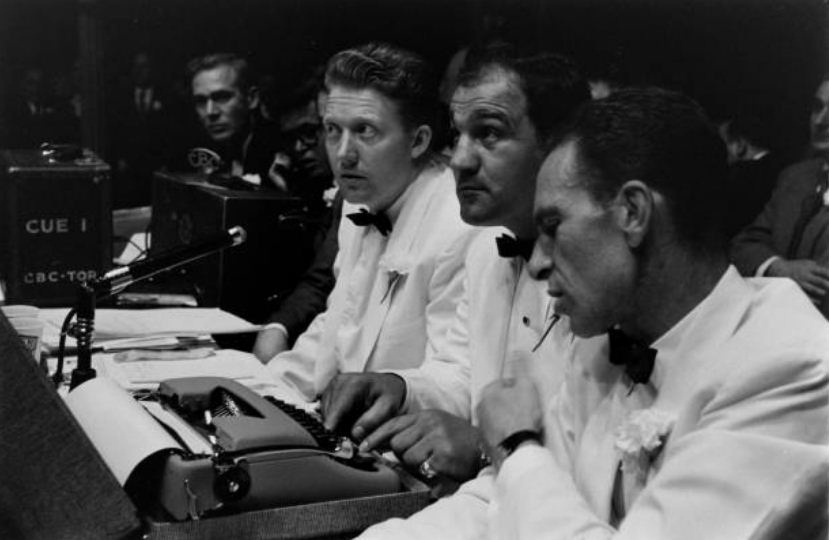 The caption simply said, “Man typing on a typewriter during a boxing match between Archie Moore and James Parker, Toronto, Ontario, 1956.” Nothing more, nothing less. But the moment I saw the photograph, I recognised who the “man” in the white dinner suit, black bowtie and white silk (appropriately, as it turns out) pocket handkerchief was. None other than Rocco Francis “Rocky” Marciano, then aged 32 and just retired as unbeaten heavyweight champion of the world. His typewriter? Well, I had a little more difficulty identifying that, but my best guess is a Japy P68 portable (picture of same below from Georg Sommeregger. It's one of only two photos in this post not taken by the same man, but more on that later.)

What I can say for certain is that the bout took place at the Maple Leaf Stadium on July 25, 1956, and, as Associated Press wired, “Archie Moore, San Diego, California, chopped up James J. Parker with the greatest of ease … Referee Billy Burke called a TKO in 2:02 of the ninth. The outclassed lanky Toronto heavyweight dripped blood from cuts around the left eye … [Moore] feinted Parker into a pretzel and sliced the left eye as early as the fourth."
A check of newspaper reports of the event established that yes, the fat fingers of Rocky Marciano – The Rock from Brockton, The Brockton Blockbuster - did indeed tap out coverage of the fight on a typewriter at ringside, for a Toronto newspaper. The story just didn’t mention the white dinner suit, black bowtie or the Japy portable (if that's what it is). But given it’s Eastern Canada, I guess there’s a fair chance of French portable would be available for use there. Most astonishingly, it seems this photograph never saw the light of day in any magazine or newspaper at the time. Indeed, this blog post may well be the first time it has been published. 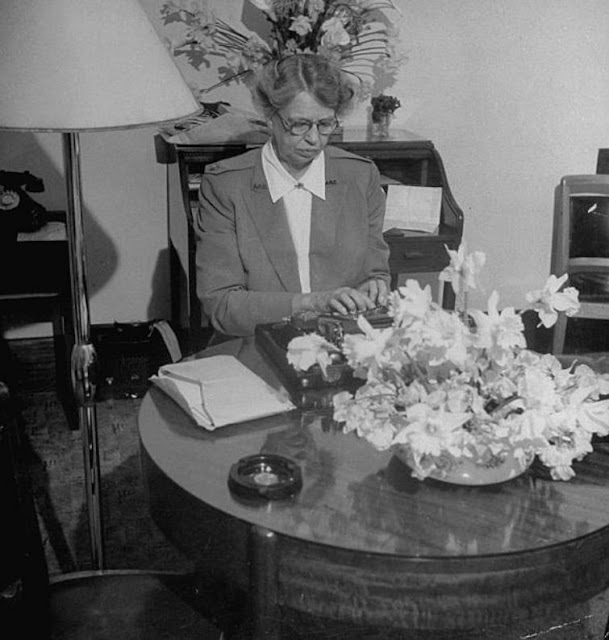 Here we see First Lady Eleanor Roosevelt at a Corona 4 portable during her exhaustive 1943 South Pacific tour, which took in New Zealand and Australia. Below is a journalist at an Olympia SF portable on a flight during Robert F. Kennedy's 1968 presidential campaign. Rafer Johnson, seen here in Rome, where he won the 1960 Olympic Games decathlon gold medal, wrestled Palestinian assassin Sirhan Sirhan to the ground after Sirhan shot and killed Bobby Kennedy in the kitchen passageway of The Ambassador Hotel in Los Angeles on June 5, 1968. Assisting Johnson in restraining Sirhan was writer George Plimpton – who, coincidentally, also got bloodied by Archie Moore, in New York in January 1959. This last photo was taken by Herb Scharfman for Sports Illustrated, and it’s the only Scharfman-Sports Illustrated photo in this post. 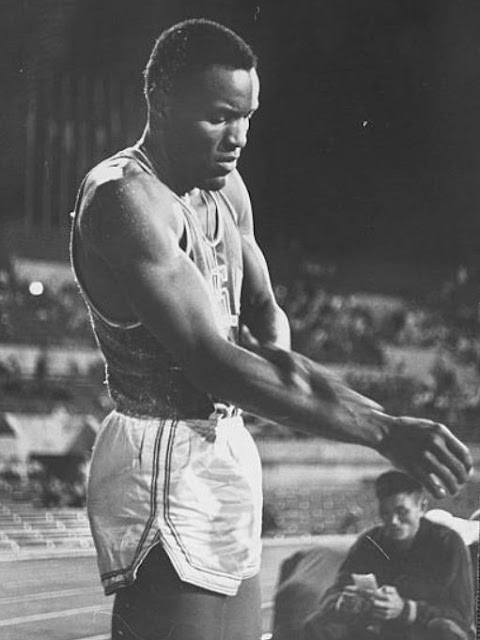 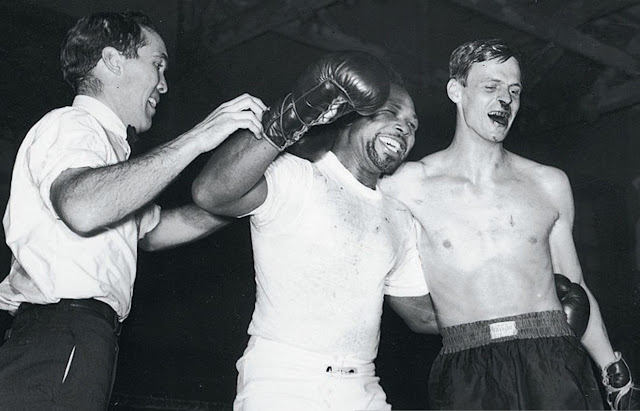 The rest were all taken by New Zealander GEORGE SILK for LIFE magazine. (Except, of course, for those of himself.)
Finally – at least as far as these typewriter photos are concerned - a shot taken during the Calderonista Invasion of Costa Rica, of yet another unidentified man holding a newspaper while tuning his radio in Costa Rica, in January 1955. Is that man using a Hammond or a Varityper? Sure looks like it! 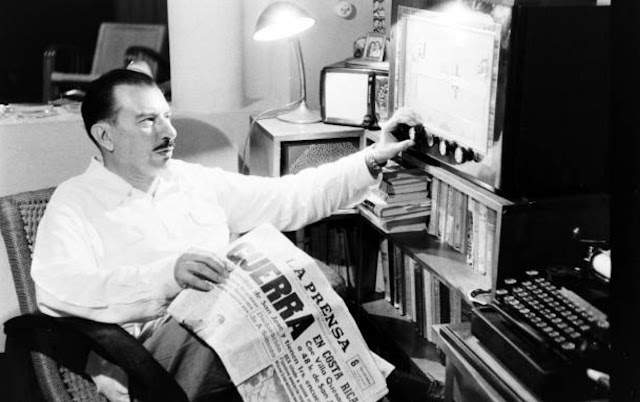 Photojournalist George Silk was born in Levin, in the Horowhenua district of New Zealand, on November 17, 1916. He worked for LIFE for almost 30 years, from 1943 until it folded at the end of 1972. 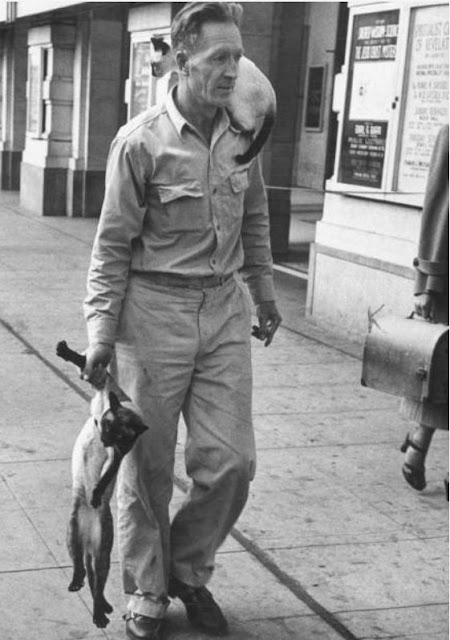 A guy drags his Siamese cat to the Los Angeles cat show in 1952.
Shooting brilliantly in both black-and-white and colour, Silk covered everything for LIFE that moved, or didn't move: Dog, cat and flower shows, movie stars and moon launches, Miss Universe and sports (Muhammad Ali, World Series Baseball, Super Bowl and college football, rugby, America's Cup, summer and winter Olympic Games, Empire and Pan-Am Games), presidential campaigns and the Kennedys extensively, travel ... and war, lots of war. There is certainly much gore in his massive portfolio of 9615 images, but also often touching humour, the off-beat, and in sport a growing fascination with capturing movement in still shots. 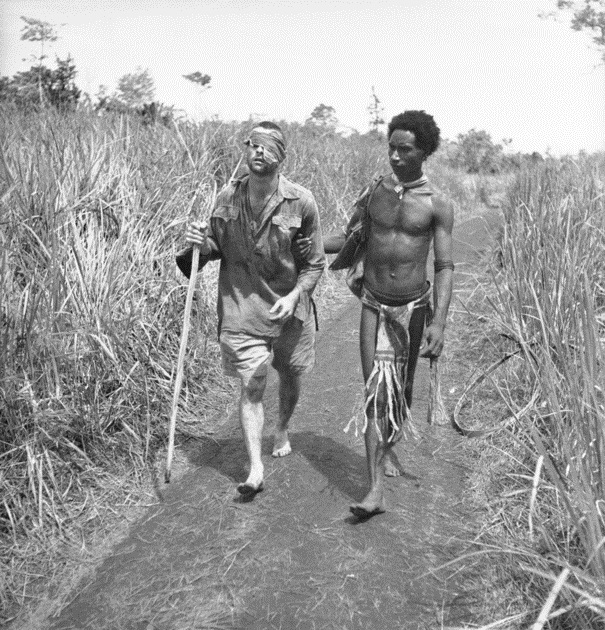 Silk is most famous for his Christmas Day 1942 photo of blinded Australian soldier Private George "Dick" Whittington being aided by “Fuzzy Wuzzy Angel” Raphael Oimbari from the Battle of Buna-Gona against the Japanese invaders in Papua New Guinea. Publication of the photo in New York prompted fellow New Zealander, poet and journalist Elizabeth Riddell, to play a more meaningful role in the war. Riddell was working in New York for Ezra Norton’s papers, Truth and the Daily Mirror, when she saw Silk’s photo. She was irritated by the trivialisation of the war in the United States – thinking it came across as “one great big Hollywood thing”. Silk’s dramatic photo was the final straw. She told Norton she needed to get to London and off she went, to gain accreditation as a war correspondent. 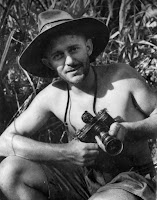 Silk's career as a war photographer began in 1939, when he was hired as a combat photographer by the Australian Ministry of Information. From Papua New Guinea he went on to cover action in the Middle East, North Africa and Greece. Trapped with the Desert Rats at Tobruk in Libya, he was captured by Rommel’s German forces but escaped 10 days later. Silk covered the Italian front, the Allied invasions of France and also the Pacific Theatre. In New Guinea, Silk walked 300 miles with the Allied forces, an ordeal later described in the book War in New Guinea. He was with US forces in the Battle of the Bulge in 1944 and was wounded by a grenade during a river crossing in Germany. Silk commandeered a B-29 to take aerial photos of the devastated Nagasaki and Tokyo in 1945 and the next year shot a photo essay of famine in China's Hunan Province. He was named magazine photographer of the year four times by the National Press Photographers' Association.
In early 1960 Silk returned to his native New Zealand, for the first time in 14 years, for a photo essay, published under the headline “Lovely Land Too Far Away” in the March 21, 1960, issue of LIFE. Images here include a couple in a grotto in Franz Josef Glacier on the West Coast, glow worms at Waitomo in the Waikato, Silk’s niece Jeanette Morgan gulping down a very fresh oyster and rainbow trout at Taupo. There are also double-page spreads of Milford Sound and Mt Taranaki. It was a tribute from the heart to a much loved homeland. 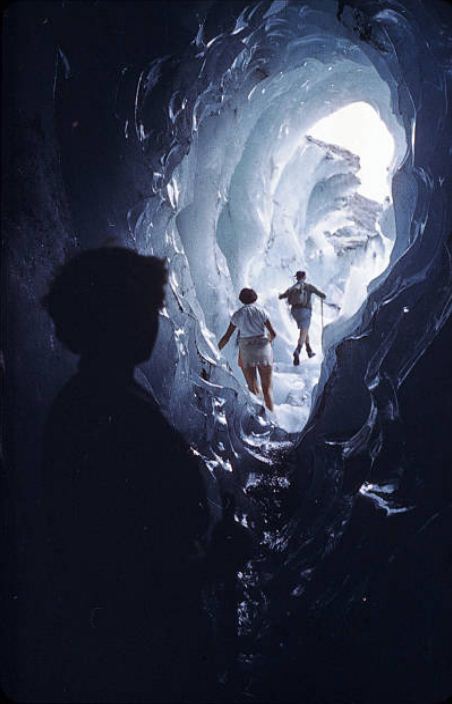 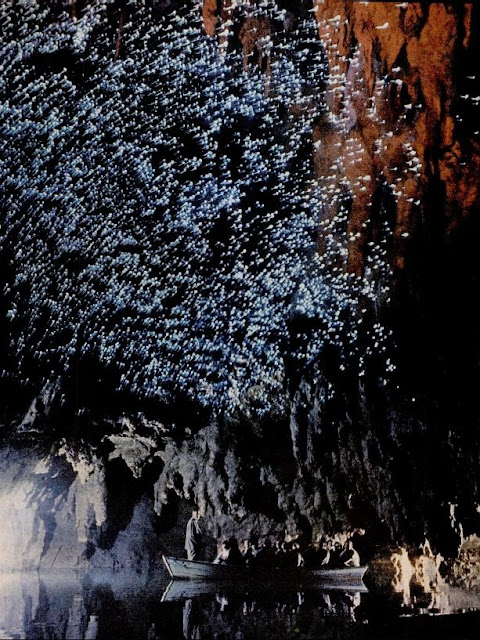 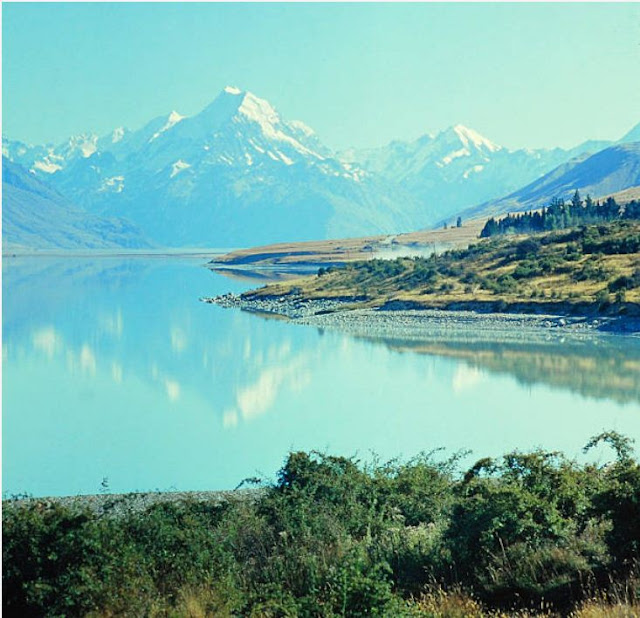 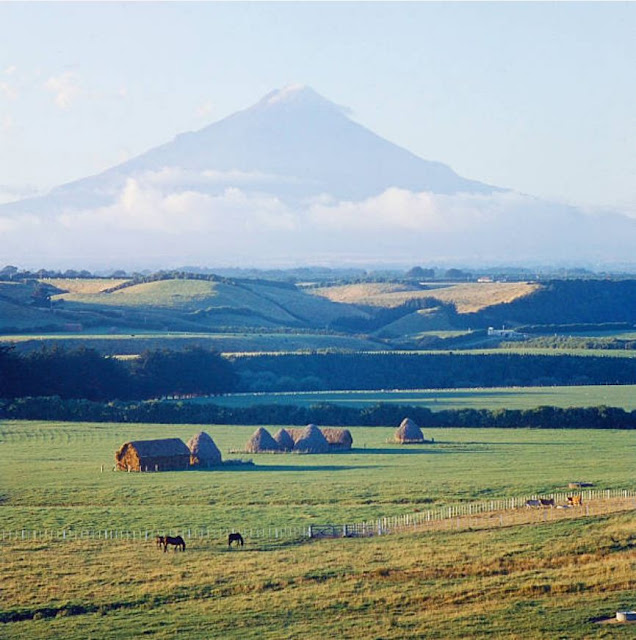 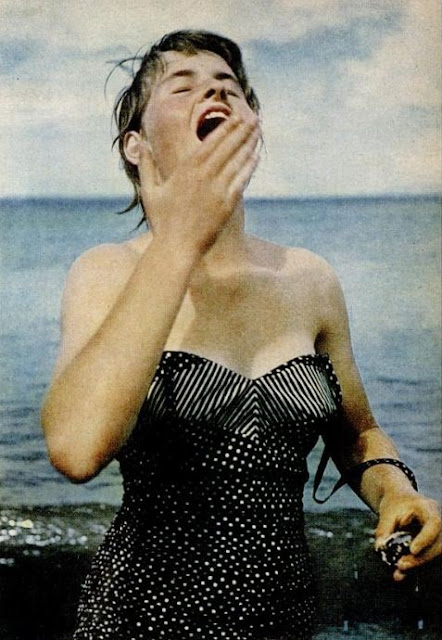 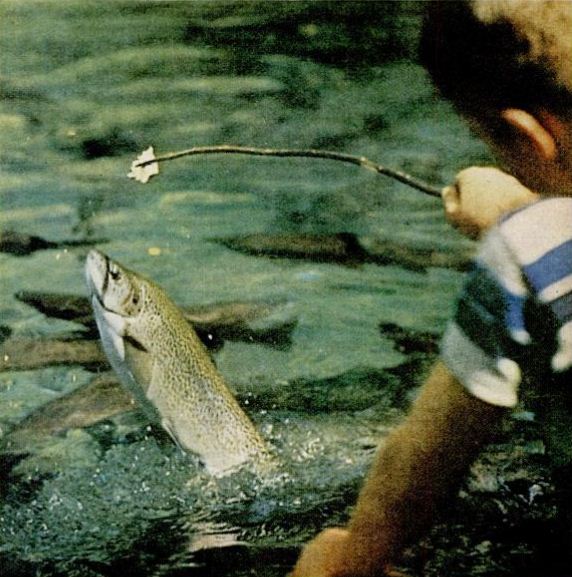 Silk died of congestive heart failure on October 23, 2004, in Norwalk, Connecticut, aged 87. Other photos of Silk (taken by other photographers): 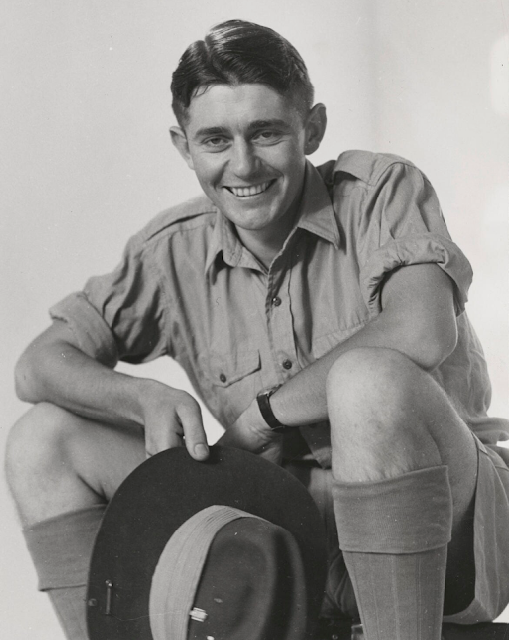 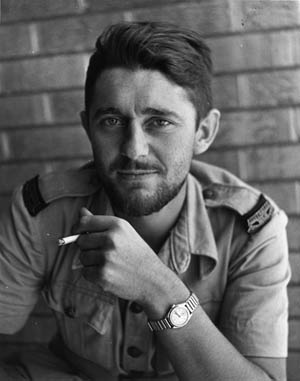 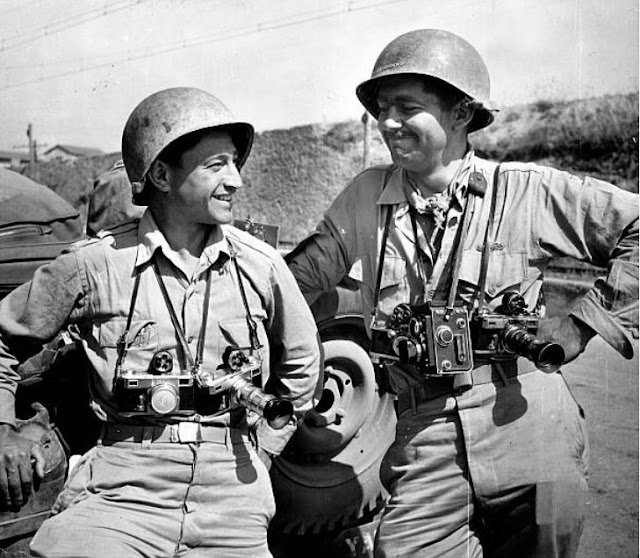 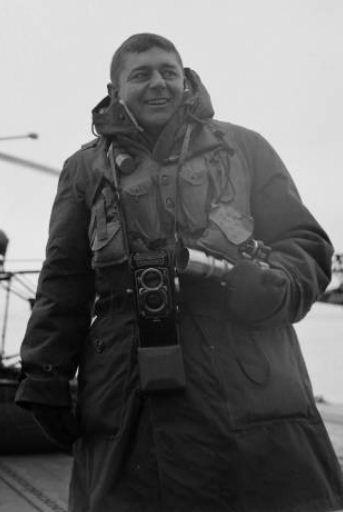 At the Thule Air Base in Greenland. 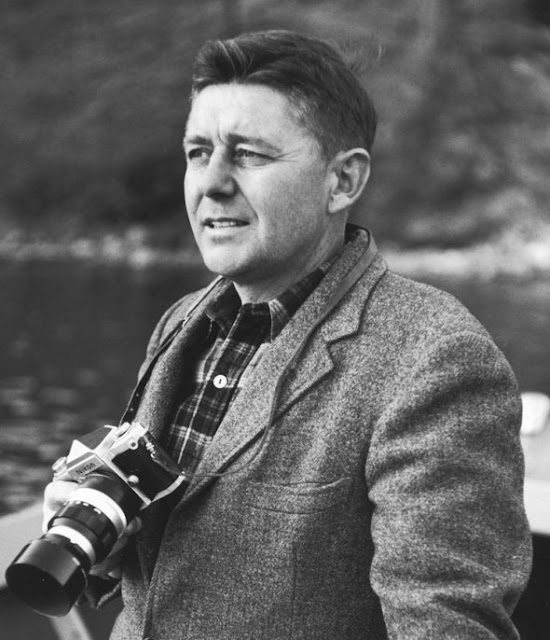 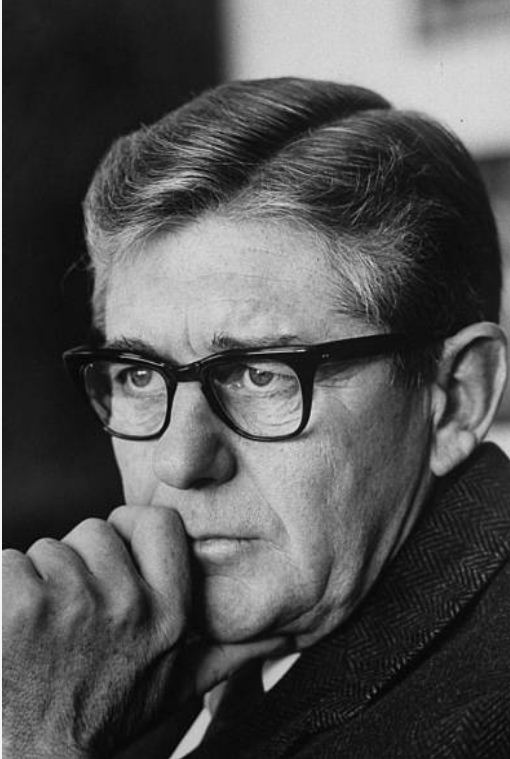 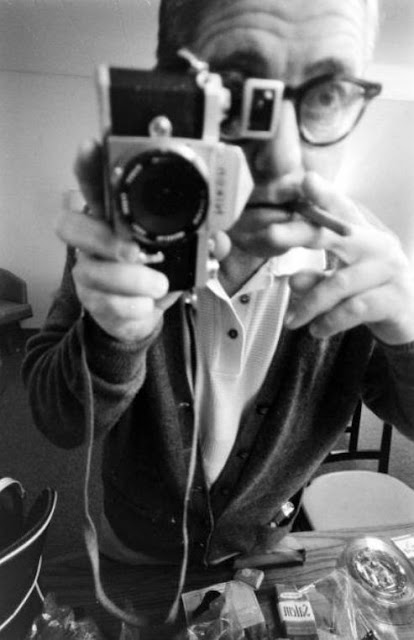 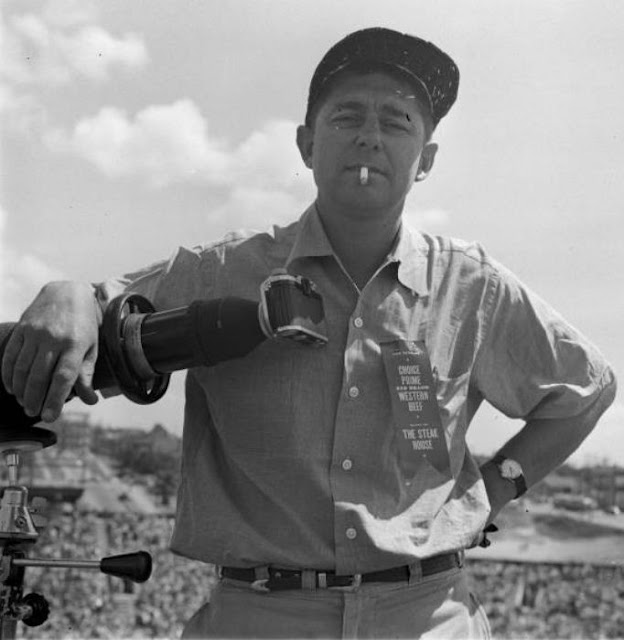 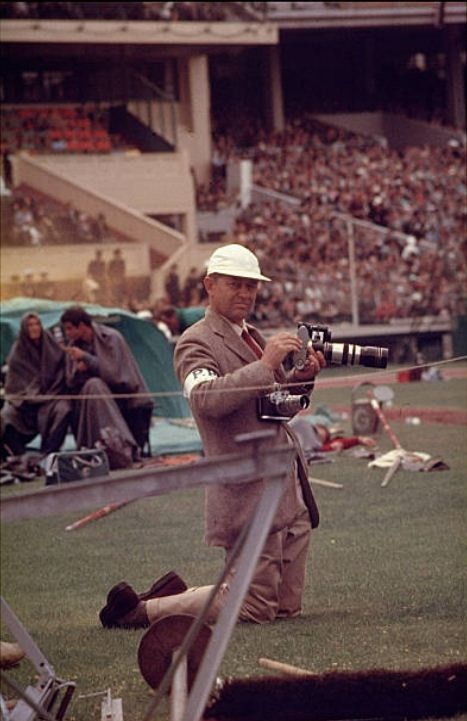 Nice series of articles! All the best from Italy
Davide

Well done Robert. It's nice to see famous people at their typewriters. I wonder how many different cameras Mr. Silk used.

...and the guy holding the cat is an asshole.

Yes, George Silk is a name to conjure with. And I believe the guy on an airplane typing with an Olympia SF is Jimmy Breslin.

George Silk, chucked in his job at a camera shop in Auckland in early March 1940 and tried to get a job as a war photographer with the NZ Army, rebuffed he went to plan B.
With his best sports portfolio under his arm managed to secure passage aboard a ship sailing to Sydney to offer his services to the Australian Army (the AIF).
After three weeks in Sydney he went down to Canberra to try and see Prime Minister Menzies and state his case.
Knocking on the door of the Offices of the Prime Minister Robert Menzies, he was received by Menzies Private Secretary, N C Tritton and Silk managed to convince him to present the album to his sports mad boss, Menzies.
Unbelievably Menzies was so impressed with Silks pictures he then arranged Silks appointment and transportation to the Department of Information cinema unit.
Silk was equipped with a uniform, given the rank of honorary captain and boarded the troop ship Neuralia which had departed on the 15th of April 1940, from Melbourne, to the Mediterranean with the 6th and 7th Divisions AIF.
He didn’t go via Papua NG, he only got there after covering the Australian side of the war in the Western desert theatre of operations.
Silk only came back after the bombing of Darwin by Japanese war planes in December of 1941, the Australian government summoned back the entire 7th Division AIF out of the Palestine where they had been on guard duties in January of 1942.
In a twist of fate on his way back to Australia aboard the hospital ship ‘Oranje’ it was detoured to New Zealand’s North Island as it was carrying a large number of sick and wounded Australian and New Zealand troops from the Middle East. In appreciation of the good work done by the Dutch personnel and Australian nurses and staff aboard, the New Zealand Government gave them all a three day trip to the Chateau Tongariro in the snow country.
After the long and hazardous sea voyage Silk then took time out to visit his family.
He then carried on to Australia and then on to PNG.
The story behind his famous photo and how it led him to being dismissed from the DoI and taking up work at LIFE magazine is another longer story which includes him being left for dead after taking the photo.
Incidentally his first assignment for LIFE in 1943 was documenting the First Lady Eleanor Roosevelt during her exhaustive 1943 South Pacific tour, in New Zealand and Australia.
He went back to Europe and worked for LIFE there in Italy and western Europe before heading east after VE day.
His photo essay of famine in China's Hunan Province caused a major political scandal between the USSR, China and the USA when it was exhibited as part of the Family of Man travelling photo exhibition in Moscow in 1959. The communists countries claimed the photos were ‘fake news’ and a slight at the how wonderful communism was, conveniently forgetting that the photos were taken four years before Mao took charge in China.
In 1972, whilst in Nepal shooting an assignment on Himalayan game parks, he received news that LIFE magazine had folded. According to the 1977 book “That was the Life” it was reported that Silk replied saying, "your message garbled... not well understood. Please send half a million dollars for additional costs”.

Fantastic article as always, Mr. Messenger. I really appreciate how you are able to bring these historic journalists to light and to life.

I love that self-portrait! Really tremendous. And the tiny camera attached to the telescopic lens at the Empire Games makes me think how far we've come.

By the way, I am certain that typewriter in the first picture is a mid-50s Smith Corona, probably a clipper since it doesn't have the "speed stripes," although I cannot say for sure on that count without seeing if it has a tabulator.