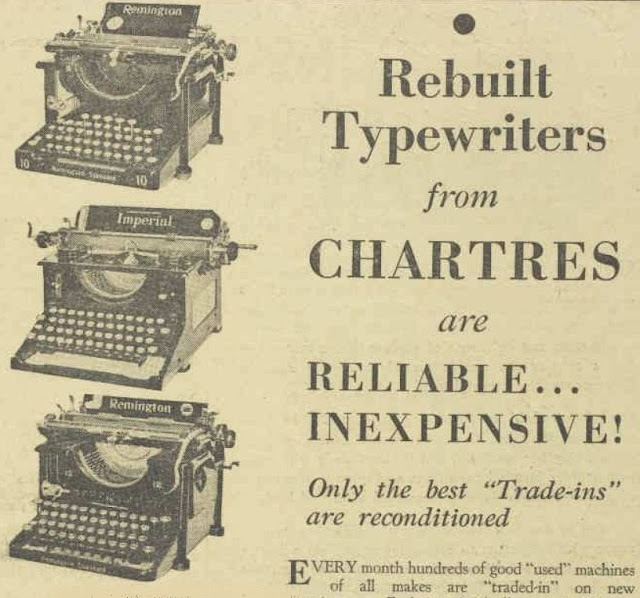 Typewriter sales worldwide went through tough times after each of the World Wars, with severe downturns in production creating situations in which demand far outstretched supply, even in the United States. But between the wars, in Australia, there was an entirely different reason for trading in typewriters and buying "rebuilt" and "reconditioned" machines. Tariffs had been doubled in 1932 and on top of that, four years later, imports were greatly restricted. Little wonder a cheap second-hand typewriter - if rebuilt or reconditioned - was far better than no typewriter at all. 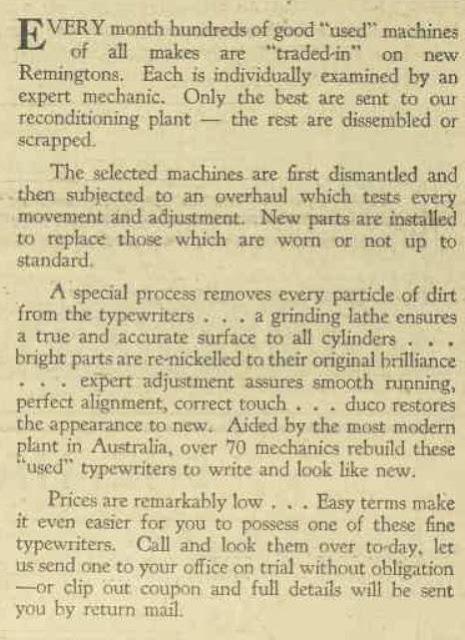 On May 22, 1936, the Australian Government introduced drastic measures designed to correct Australia's adverse trade balance with foreign countries, including the US. America was described as a "poor customer" and an "indifferent buyer" of Australian goods. (In fairness to the US, there wasn't a lot to buy. Australia had little or no industry apart from agriculture.) 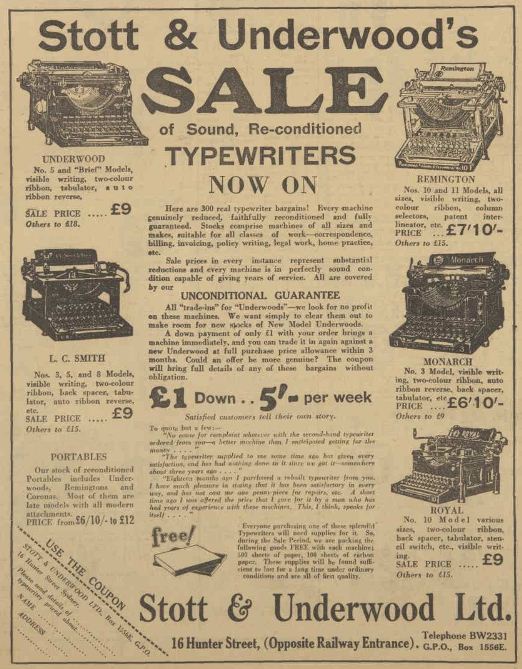 The importation of fully assembled US-made typewriters into Australia was reduced by 75 per cent, effective immediately. A total ban on US vehicle chassis was also introduced. Because of these set figures, typewriters and chassis were excluded from a licensing system, adopted to limit imports of other items. Licences for these items were refused unless they became a national necessity, or where employment in Australia was involved. 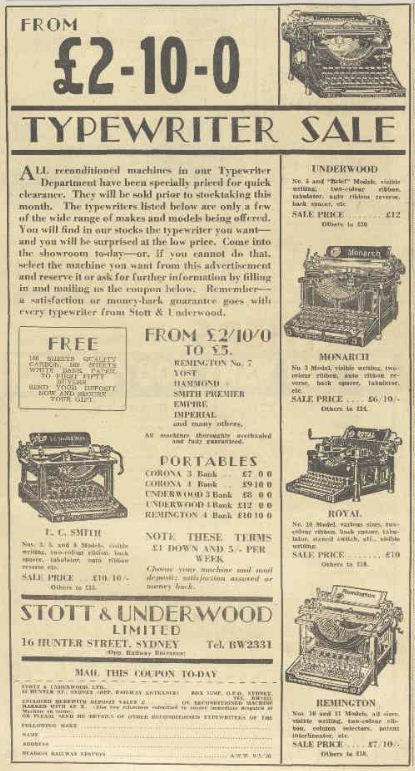 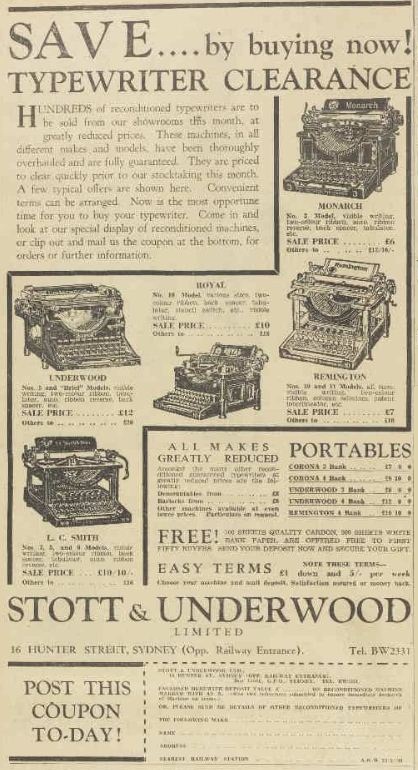 During 1934-35, the total value of Australian imports, including typewriters, had been a crippling £17.3 million. The Government firmly stated "The object of [the restrictions] is not to permit any of these goods to come into Australia from the United States and other non-buyers of Australian goods."
As far as typewriter sales in Australia were concerned, the immediate consequence for this country's two leading dealers, Chartres and Stott, was the necessity to appeal across the country for second-hand machines to "rebuild" or "recondition". The writing was on the wall for them: the severe import restrictions would mean the supply of new typewriters would fall way short of demand. And in order to survive, Chartres and Stott & Underwood had to keep selling typewriters.
The restrictions only added to their woes, as the British Empire Economic Conference in Ottawa in 1932 had doubled the import duty on new typewriters from 10 per cent to 20 per cent. The Ottawa gathering of British colonies and autonomous dominions was held to discuss the Great Depression. The group admitted the failure of the gold standard and abandoned attempts to return to it. The meeting also worked to establish a zone of limited tariffs within the British Empire, but with high tariffs with the rest of the world. This was called "Imperial Preference" or "Empire Free-Trade" on the principle of "home producers first, Empire producers second, and foreign producers last". The result of the conference was a series of bilateral agreements that would last for at least five years. The United States was naturally annoyed by the implementation of Imperial Preference, as it seriously affected it economically. 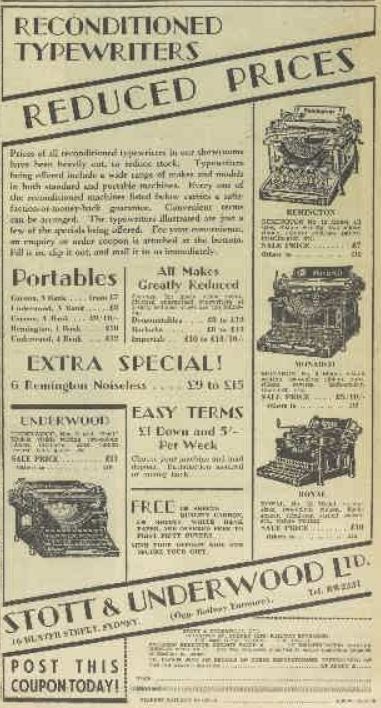 Chartres was the Remington agent, Stott was in partnership with Underwood. But it suddenly didn't matter which brands these companies bought or accepted as trade-ins on generous terms. They just needed typewriters, any typewriters, to rebuild.
And so it was that in mid-1936, a second-hand standard typewriter sales battle broke out. The prices were ridiculous.
Posted by Robert Messenger at 08:41

That is a fascinating article and a lesson in the nasty effects of tariffs.

Seems tariffs only hurt the common working person, even today. The aside though was a booming rebuilding trade.

Well done Robert, a great contribution to typewriter history, especially in Australia. Probably explains why one comes across some very old machines with a non original paint job.