It Was What Jack Thomas Had to Say 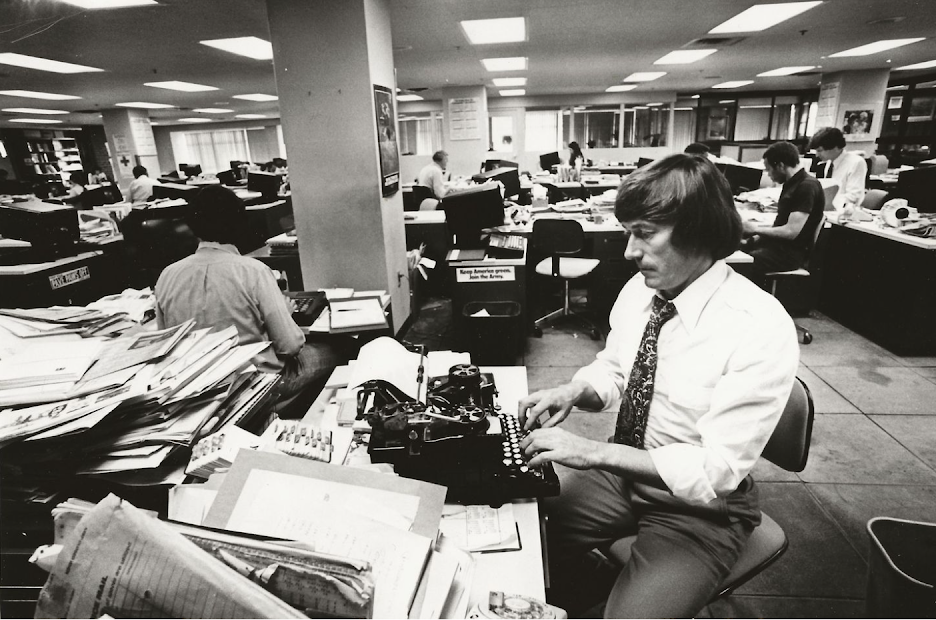 Jack Thomas, of Cambridge, Massachusetts, at a Royal typewriter in the Boston Globe city room in 1979. The photo was taken by his colleague, Stan Grossfeld.

It was rather eerie reading Jack Thomas’s farewell column in the Boston Globe magazine last week. Jack has been diagnosed with inoperable cancer and has only months to live. He is nine years older than I am, yet as he outlined his 64-year career in newspapers in his last column, so many of his journalism experiences and thoughts about the profession seemed to coincide with my own. For some strange reason, I appear to be enjoying rude good health right now, but of course, through my wife's illness, I am living the best way I can with the scourge of cancer, on a daily basis. Like me, Jack’s greatest wish, if there is an afterlife, is “to shake hands with my best friend, my father, who died in 1972 and whom I’ve missed every day since.” My father died in 1981, aged 73, the age I am now.

Among many cherished memories of a life well lived, Jack recalled playing pool “against two of the greatest, Willie Mosconi in Denver, and in Boston, Minnesota Fats, who was the inspiration for the Jackie Gleason role in The Hustler.” The closest I’ve come to greatness among cueists is Alex “Hurricane” Higgins”, not forgetting my house cleaner who won a world team’s title in Malta. Still, one of my favourite recollections is of playing pool, not with anyone with the skill of Mosconi or Minnesota Fats, but in a pub with my soon-to-be London-based son-in-law, the night before my wedding, and finding all the tricks of the trade, hard learned in a misspent youth, could still be eked free, sufficiently at least to win. (Mind you, I suspect John might have let me win, and his look of astonishment at the outcome was mere play acting. But as a young man who once had the intestinal fortitude to step into a British boxing ring, he retains my highest respect.)

John Charles “Jack” Thomas was born in Boston on February 16, 1939, and grew up in Doncaster. At age 14, while delivering the weekly Dorchester Argus, he made up his mind to be a journalist. After graduating from Doncaster High School in 1957, Jack attended Northeastern University for two years, taking part in a work-study program while a copy-boy for the Globe’s sports department. He joined the Haverhill Journal’s Ipswich bureau in 1959, transferring to the head office in 1960. By 1962 Jack was assistant city editor. He returned to the Globe as a police roundsman in 1963, and from 1964-66 covered the Massachusetts State House. Jack became the Globe’s youngest ever city editor and in 1971 was assigned to the Washington DC bureau. While there he took up a journalism fellowship at Stanford University in California, and returned to Boston to become the Globe’s national correspondent in 1974. Between 1978-81 Jack wrote a twice-weekly column for the Globe. He became the paper’s ombudsman in 1997, returned to writing in 2001 and retired in 2006, aged 67. In 2012, Jack graduated from Harvard with a bachelor degree in humanities and then pursued his Masters degree in English literature at Harvard.

Jack’s farewell column come about soon after he learned he was dying. So he sat down “to do what came naturally, if painfully: Write this story.” He went on: “I was blessed to write for a newspaper, a career H.L. Mencken described as the life of kings … To me, every daily newspaper was a wonder - all those stories, local, national, global, all written on deadline, with photographs, analysis, columns, editorials, comics and crossword, not to mention all that [sports] news - if that isn’t a miracle, what is?”

One fear I have about being told I’m dying is deciding what to do about the boxes upon boxes of letters, clippings and notes that I have accumulated over more than 60 years, and which are stored in my typewriter workshop. Jack Thomas now he finds he has to dispose of the same stuff. “Filling wastebasket after wastebasket is a regrettable reminder that I have squandered much of my life on trivia.” I wonder if, when it comes to my time, I will feel the same way. I would like to think not. But, then, when that task does need to be faced, maybe I too will believe I’ve squandered much of my life on trivia.

Posted by Robert Messenger at 20:04

I read his article and thought it could just as well be written about so many of the newspapers as they died one by one and are still dying. And we wonder why there is so much misinformation now.