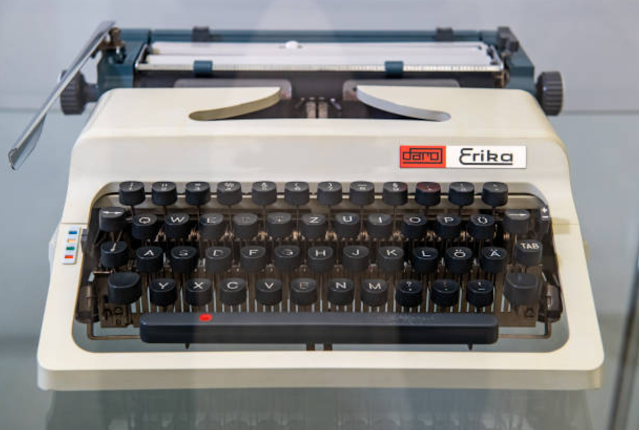 Hundreds of typewriter users worldwide will be very familiar with the designs of German Karl Clauss Dietel, probably without realising the portable typewriter they are using is Dietel’s work. I’m a case in point. Until an exhibition of Dietel’s designs opened at the Chemnitz Art Collections (Kunstsammlungen Chemnitz) at the King Albert Museum on Theaterplatz last week, and a 1974 Erika Daro 50/60 appeared in it, I had no idea Dietel was responsible for the no-frills look of so many of the machines I’ve been using in the past 24 years. 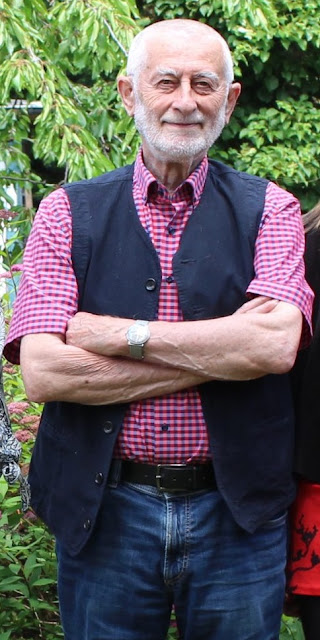 Karl Clauss Dietel
The exhibition is called “Simson, Diamant, Erika - Formgestaltung von Karl Clauss Dietel”. Two years ago Dietel, 87, who had archived his oeuvre for almost five decades, handed the lot over to the care of the Chemnitz Art Collections. This included personal drafts, models, products, photographs and documents. 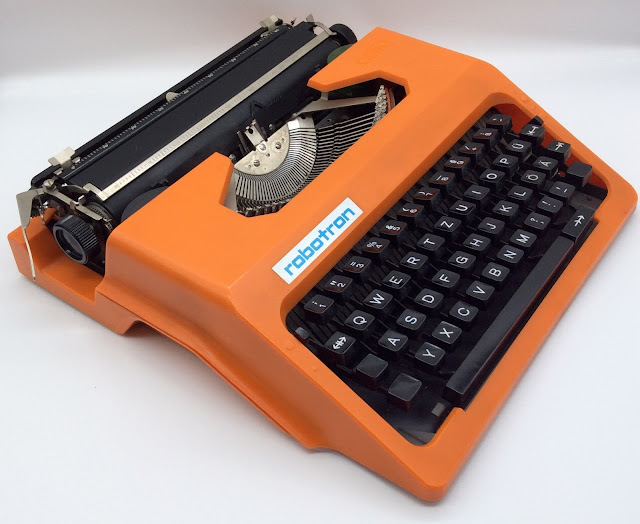 The Robotron Cella shows the influence of the Olympia Traveller C and the Brother 762TR,
and appears to have the Silver-Seiko mechanism. 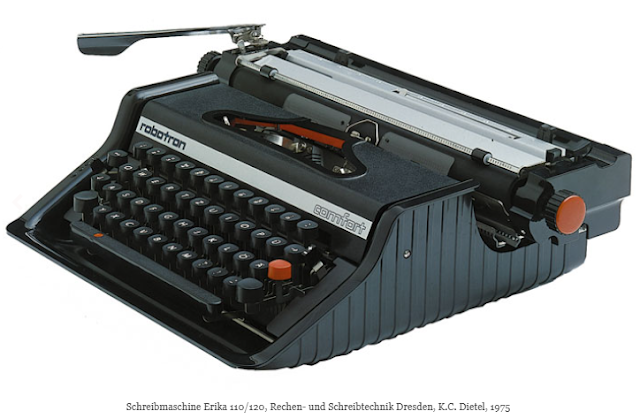 Most of Dietel’s early work was done in the days when East Germany existed and its typewriter industry was incorporated into the overarching Soviet Union economic apparatus. It stands to reason, then, that Dietel-designed typewriters from that period look like they could have been shaped by artificial intelligence. Ironic, given that in his younger days Dietel declared East German cars as not being designed at all. But with his typewriters there’s not much in the way of flair or imagination. Functional, unobtrusive, durable, yet practical - these were the key approaches. Dietel’s designs have been described as “committed to the ideals of a caring humanist society”. They very much fitted in with the modes on the east side of the Berlin Wall. Dieter’s typewriters are stylish in a minimalist way, but whether they can be called aesthetically pleasing is another matter. There’s no nod to the fancy stuff the like of Ettore Sottsass and Mario Bellini were producing for Olivetti on the West side of the Iron Curtin. Not even the colours were bright, at least not until the Cella came along. This Erika was also sold as an Imperial 34 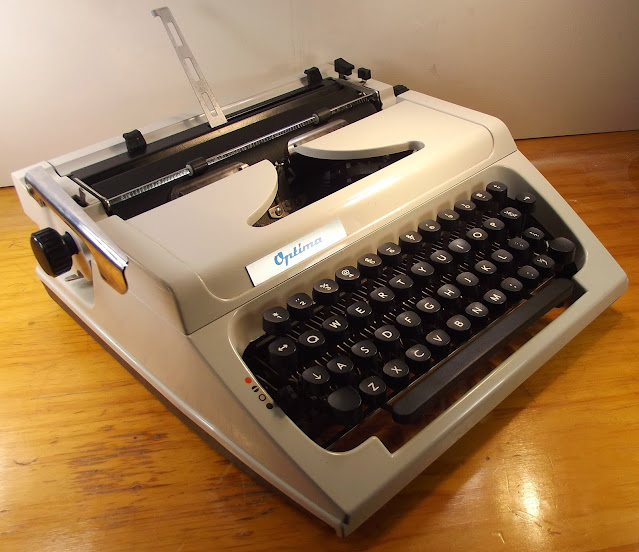 It’s understandable, then, that Diedel’s designs are considered today to be “German Democratic Republic classics”. They are said to be “outstanding works of Eastern European modernism that have an enduring appeal”, and that much is certainly true. They include, apart from Erika, Robotron and Optima typewriters, the Simson motorcycle and Diamant radios. 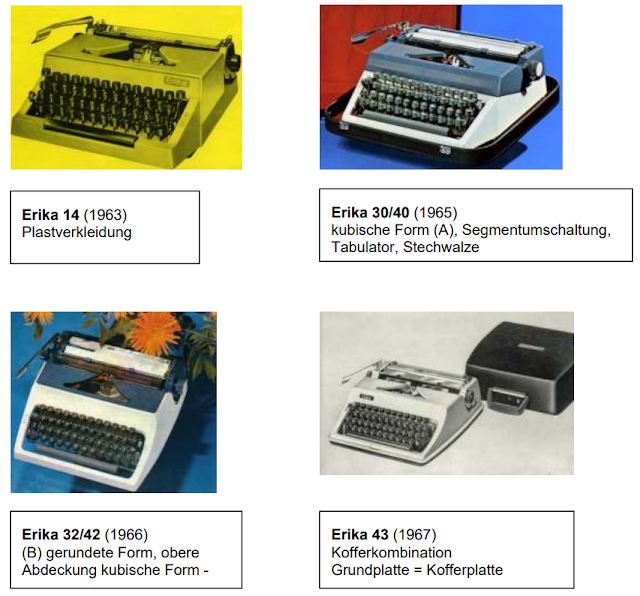 Erikas 1963 to 1967.
Dietel was born in the Reinholdshain district of Saxony on October 10, 1934. He has lived in Chemnitz since 1961, first going there as a designer for the “Central Development and Design for Vehicle Construction” works in what was then called Karl-Marx-Stadt (now back to Chemnitz again).  He went freelance in 1963 and began designing typewriters for Erika and Robotron. One of his first typewriters was the Erika 14 (he also designed the Erika 110/120, as well as the 50/60, and Robotron Cella). Dietel was awarded the 2014 Federal Design Prize for his life’s work, which is inseparably linked with Saxony and Chemnitz. He served an apprenticeship as a machine fitter in Glauchau from 1949-1952, then studied at the engineering school for motor vehicle construction in Zwickau. From 1956 he was at the Weissensee Academy of Art in Berlin, studying industrial design. Active in the GDR’s Union of Visual Artists, Dietel defended the professional independence of freelance designers. 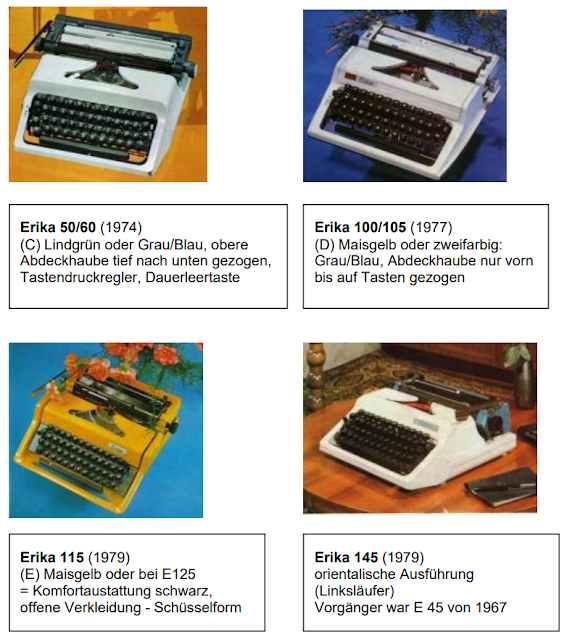 Can't say I personally like these designs, but I think they do have a style of their own.

the vertical lines on the bottom of the body have both an architectural strengthening function while possessing an visual industrial design feature reminiscent of air-cooled motorcycle cases.