Unreliable Reiley: A Blinkered History of the Evolution of the Typewriter 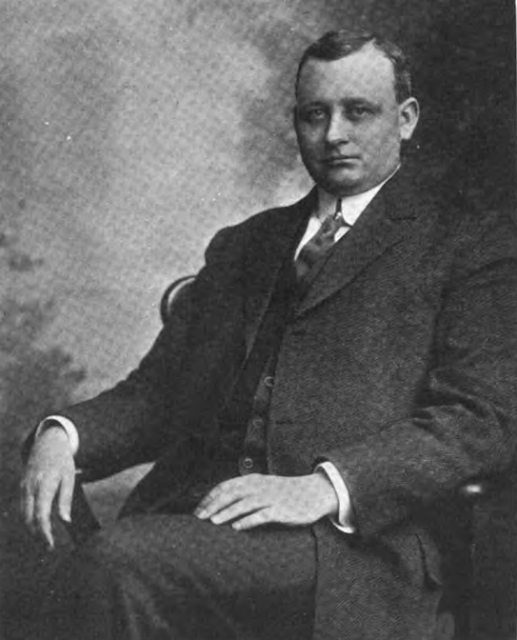 Alan Campbell Reiley (1869-1947)
Alan Campbell Reiley’s much-quoted article, “The Evolution of the Typewriter”, which appeared in The Rotarian issue of March 1914, reflected no more than the narrow view of Reiley’s employer, the Remington Typewriter Company, on what were the most important developments in the typewriter industry in the preceding 40 years. To begin with, Reiley made no mention of Christopher Latham Sholes, yet in 1923 Reiley was recruited by the Herkimer County Historical Society to write The Story of the Typewriter 1873-1923, and in that paid (albeit uncredited) role had no choice but to acknowledge Sholes' pioneering work. 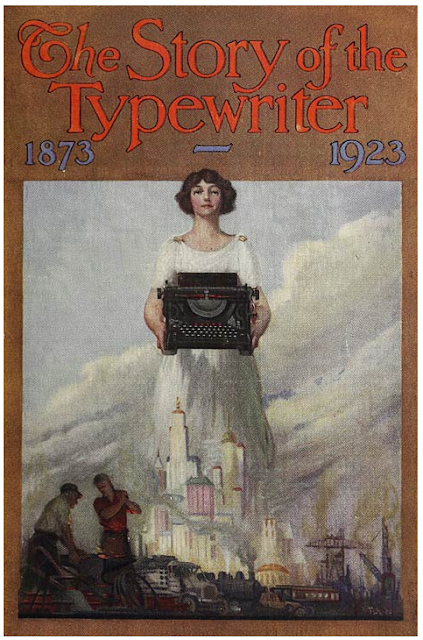 Reiley’s primary position with Remington was in advertising, although he was described in The Rotarian as a “department manager”. He was certainly Remington’s advertising manager when, at the end of 1916, he was elected president of the Association of National Advertisers in Boston.

Admittedly, to meet the needs of this particular edition of The Rotarian, Reiley concentrated on the use of typewriters in business. But there was no excuse whatsoever to dismiss the emergence of visible typing in a mere two lines. Remington had only switched to visible writing five years before Reiley’s article was written, but visible writing typewriters had been around for at least 13 years before that. Portables were not, of course, designed for business use, but a passing mention, perhaps of just one line, would have been justified given the impact portables had on the typewriter industry in the 20th Century. Instead, Reiley focused his attention of billing and tabulating typewriters and the adding and subtracting device. Reiley ends his article by asking, “ … has the writing machine realized and completed its mission?” Well, obviously not, considering the enormous financial returns on portable production from 1912 onwards. Reiley believed no man could answer his question, when in fact it already been answered. His article, in other words, is by no means rounded, nor does it justify the headline. It was little more than a publicity plug for Remington (which took out a full-page advert in the same issue). And of course Remington didn’t start thinking seriously about a portable until 1919. 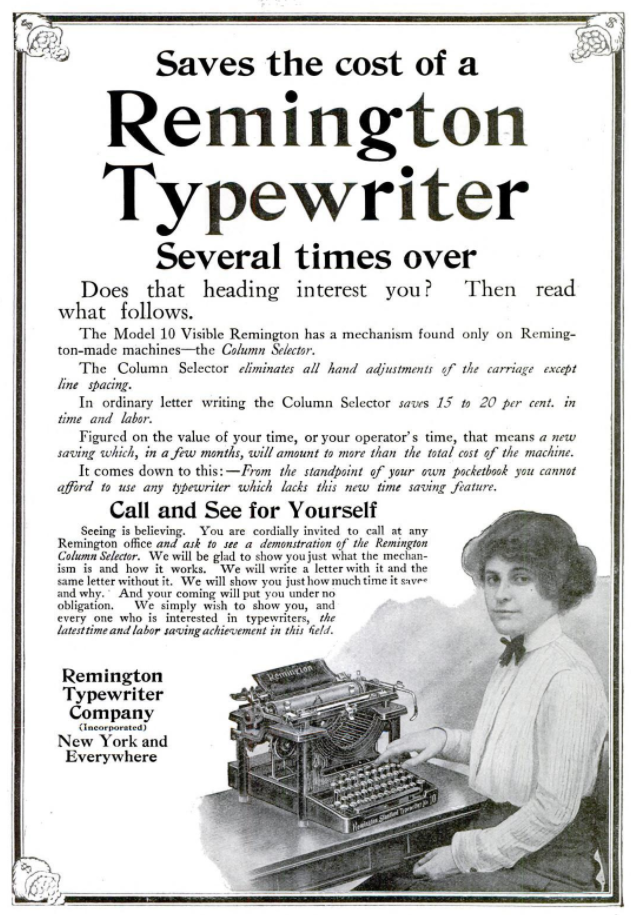 Reiley, who was born in 1869 in New Jersey, started working with Remington in 1900 as an advertising clerk. He also wrote a history of the typewriter for the Encyclopedia Britannica. He died in the Bronx 1947. 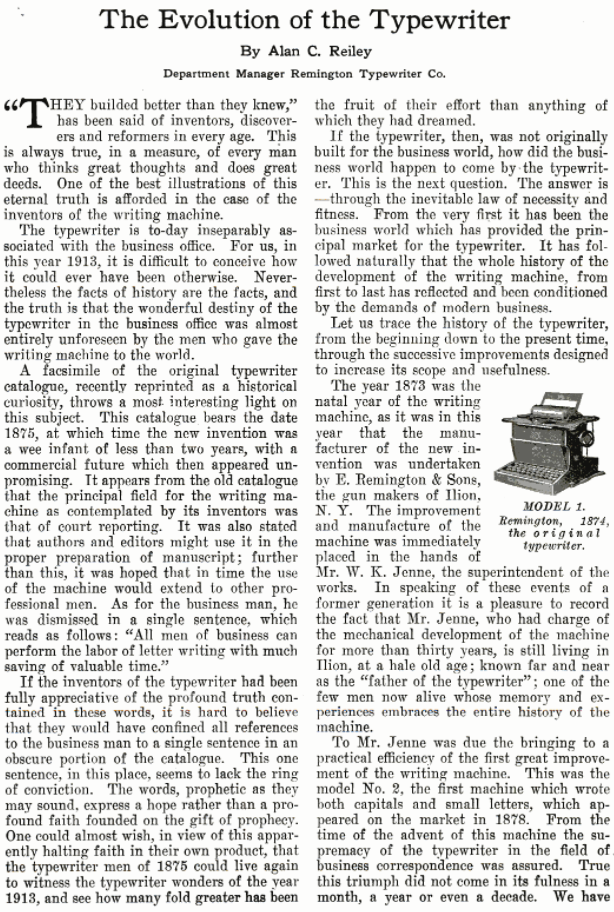 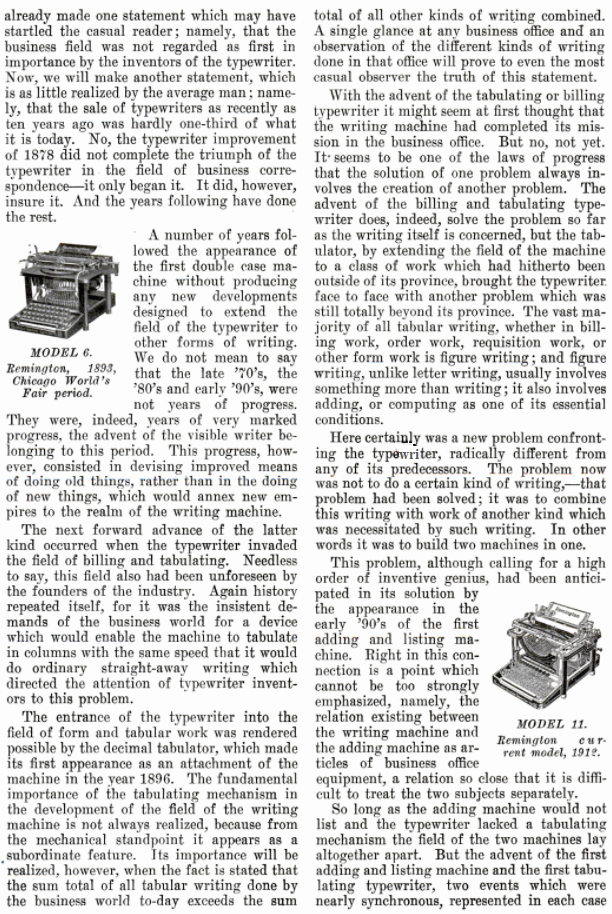 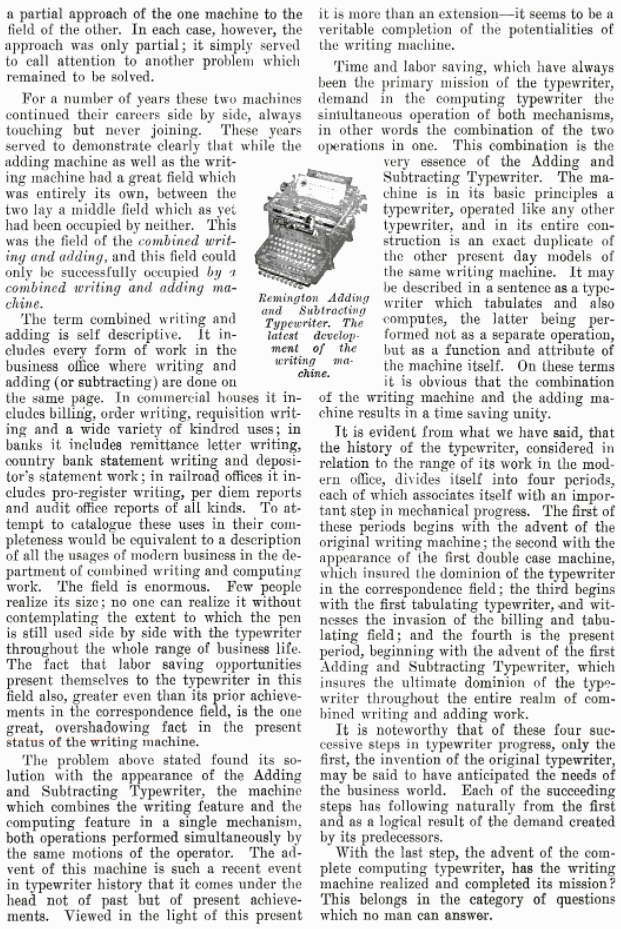 Posted by Robert Messenger at 15:07