My Big Bust Up with the Pfizer Billionaire 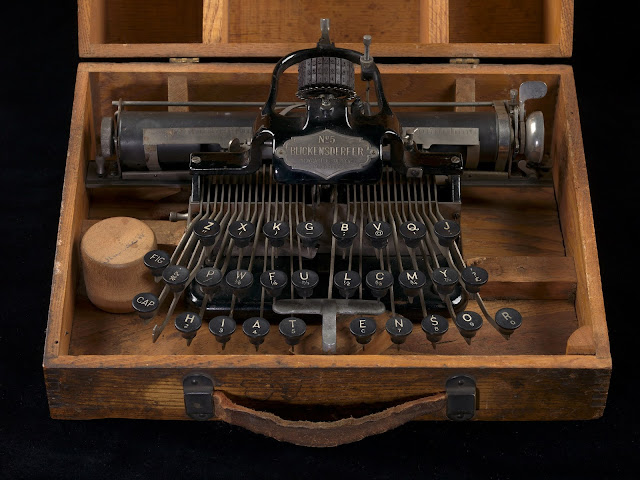 The Blickensderfer 5 upon which John Millington Synge
wrote The Playboy of the Western World, set in the west of Ireland.

There’s a nasty bun fight going on in this country concerning who did and who didn’t speak to Pfizer about getting more of its Covid-19 vaccine to Australia, and when they did or who didn’t speak to Pfizer. It’s a diversion from the realities: the Delta variant is raging out of control in Sydney and just 9 per cent of Australians have been fully vaccinated. Here in Covid-free Canberra it was a bit of a lucky dip for people of our age. My wife was directed to the Pfizer jabbing rooms and I was shepherded toward AstraZeneca. Go figure.

The TV news is full of Pfizer talk and all I can think of when I hear the name is that of John Augustine Mulcahy, who was once a big deal at Pfizer and with whom I once had a major falling out. And when I think of Jack Mulcahy, I am reminded of the Norman Wisdom movie, There Was a Crooked Man. This is in part set in a quiet, dreary seaside town called Sleath, where the bigwig McKillup owns everything and everybody and is bleeding the place dry. Norman eventually exacts his revenge by blowing up Sleath. When I saw this film in the Regent Theatre in Greymouth 60 years ago, I wondered if anyone had ever thought of coming back to my own home town and doing the same thing. But the real reason Jack Mulcahy puts me in mind of McKillup is Waterville, a village on the Iveragh Peninsula in County Kerry, Ireland, which in the 1960s was Charlie Chaplin’s favourite holiday hideout. The town's name in Irish, Coireán, means “little cauldron”, but when I went there, there was nothing much cooking except for whatever pie Jack Mulcahy had his finger in. And there were, it seemed, a great many. His pride and joy, however, was the championship golf links he’d had Eddie Hackett build in 1968.

More on that later. First, a little bit about Jack Mulcahy, a self-made billionaire. He was born in 1906 at Harbour View, Dungarvan, County Waterford. He once claimed to his family that he had spent time in Kilkenny jail for killing the Black and Tans who attacked his sisters, and that he escaped death only because he was under age. It is known that he was a dispatch carrier for the IRA during the Irish civil war and was imprisoned by the Free State government for 13 months before emigrating to the US in 1923, aged 17. He went on to make millions from an odd mix of steel and pharmaceuticals, the latter an investment to avoid taxes.

On September 10, 1975, I was sent with my trusty Olivetti Lettera 32 portable typewriter to Waterville to cover the first Kerrygold Classic golf tournament. I drove down from Dublin in a Datsun 1200, got lost on the Ring of Kerry, and told bewildered readers of The Irish Press the next morning that I thought I deserved to win the pre-tournament long-driving competition instead of some bloke called Tony Jacklin, who had to pay a heavy price by shooting 82 in the first round of the tournament proper. What I’ve never previously revealed is that the barman at the golf club calmed me down with the most refreshing drink I’ve ever had: fresh Kerry milk and dry ginger ale (don’t try it unless the milk is super fresh).

The five days I spent in Waterville rate high among the most memorable in my half-century sports writing career, though none of the more pronounced recollections have anything to do with golf. The first night a Kerry friend, who’d played rugby for New York and Ireland and later became one his nation’s leaders, caught up with me and we gatecrashed what idle bar gossip had it was an orgy on the top floor of the Waterville Lake Hotel. It was nothing of the sort, of course, but a wild gathering of drunken and uncouth cashed-up Kerrymen, returned from their building sites in England (perhaps with the intent of blowing up their old home town). I met the sister of the young American amateur who was about to win the tournament, but that’s a story which will have to wait for the Messenger memoirs. And those will have to first get past the censors and defamation lawyers before publication, so don’t hold your breath.

The next evening was spent in Ballinskelligs just outside Waterville, in the company of a couple of notorious drug smugglers and gun runners, Howard Marks and Jim McCann. Things turned decidedly ugly, and I ended up giving Simon Owen and his wife a dreadful fright (Simon shot a first up 90). But even those events gave no warning as to the horror that lay ahead of me. On the Friday morning I was summons to a meeting with Jack Mulcahy and Bob Hope. Mulcahy, who’d given Richard Nixon $600,000 toward his 1972 re-election campaign, liked to show people that his millions allowed him to mix with the rich and the famous, and he had invited golf fanatic Hope to attend the Kerrygold Classic. Mulcahy mistakenly assumed I’d enjoy listening to Hope’s wisecracks, but I was much more interested in hearing what Mulcahy and Hope, who had both helped Nixon get re-elected, thought about Watergate. Hope promptly got up and walked out, leaving me to deal with an irate Mulcahy. His 'friend' felt slighted, apparently. Little did I know then that the year before, Mulcahy had taken offence at the mention of Nixon during the sermon at a Sunday morning mass in Waterville. Mulcahy intervened from the congregation and objected to Nixon's being mentioned from the pulpit, describing him as an honest man and a friend, and accusing the US media of being inspired and run by communists.

The golf tournament was decided in a playoff but the winner couldn’t claim the prizemoney and was given a butter tub of gold instead. I headed off to Celbridge in Kildare to catch up with Eric Clapton, Mick Jagger, Sean Connery, Shirley MacLaine, Burgess Meredith, Judy Geeson, Milo O’Shea and John Huston for the filming of Circasia under a big top beside Straffan House. Outside, in the dusk, I told Clapton his skin looked purple and he said I didn’t look too well myself. After five days in Waterville, it was hardly surprising.

All of the above is true. No names have been changed to protect the innocent.

Posted by Robert Messenger at 15:54

Seems that the with the increased spread of the virus the Government should be getting as much of all the vaccines they can.