The Tokyo Olympics and Typewriters Galore: Things That Won’t Be Seen at the 2021 Games

A scene from Kon Ichikawa’s movie Tokyo Olympiad.
On the eve of the Tokyo Olympic Games opening, I'm feeling nostalgic for a time when the Olympics were true sporting events, and not just cash cows for TV networks. I doubt these particular Games would be going ahead if a majority of Japanese people had any say in the matter, but they don't. TV makes the call, through its International Olympic Committee puppets. The IOC has Japan over a barrel, and money, unknown at Olympia, is its god.

Kon Ichikawa’s brilliant film of the 1964 Tokyo Olympics begins with the line, “The Olympics are a symbol of human aspiration”, and for me one early scene from the movie sums up the situation. A dreamy-eyed young Japanese girl is engrossed watching the Opening Ceremony, her eyes full of wonderment and fascination. That's how the Olympics were for me 57 years ago. To be inspired by the Olympics back then was not to be motivated to win bucket loads of money, but to aspire to be involved in the very highest and purest pursuit of sporting achievement. All long gone, I'm afraid.

Also long gone are many of things that were a common sight at the 1964 Tokyo Olympics, including typewriters. Ichikawa’s movie includes delightful scenes from the Olivetti Press Centre (note, Press, not media). Delightful for me at least, as the footage is not just a reminder of my past life covering such international sporting events as the Olympics, but of seeing so many typewriters being put to good use by journalists. It’s the way it used to be done, and done so much more efficiently and effectively than today. It’s worth watching Ichikawa’s Tokyo Olympiad just for the typewriters alone. Quite apart from that, the film is considered a cinematographic milestone in documentary filmmaking and is one of the few sports documentaries included in the book 1001 Movies You Must See Before You Die. 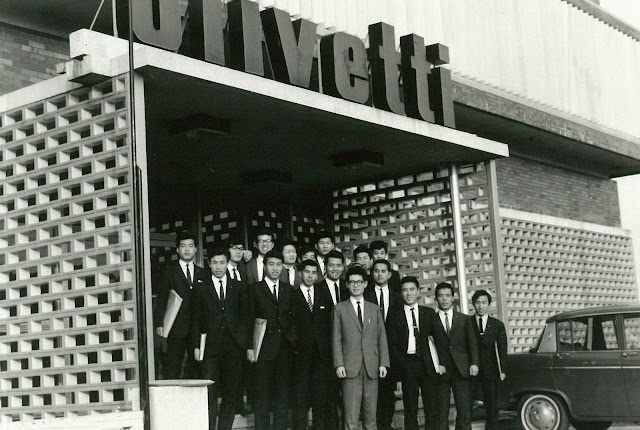 As the journalists pound away at their typewriters in Tokyo Olympiad, I noticed that one man had a cigar clamped in his mouth and seemed to be typing one-handed. I immediately wondered whether it was the late Jack Knarr, a friend of Mike Brown of Typex fame and a man who once went up against Richard Polt in a speed typing contest (it was a close call, I believe). Jack, as I recall, typed one-handed, and also. I think, covered sports. Whether he chomped on cigars I do not know, as sadly I never got to meet him. 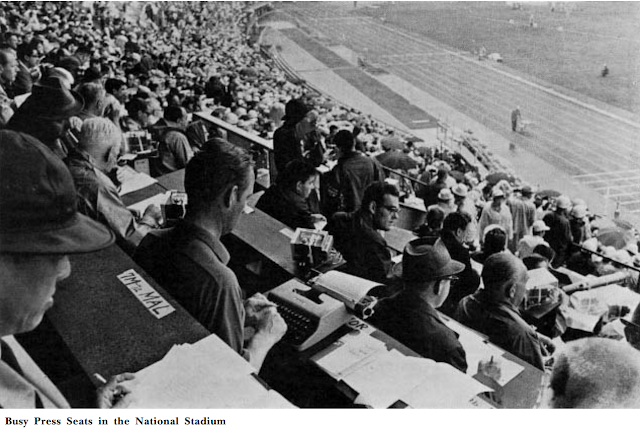 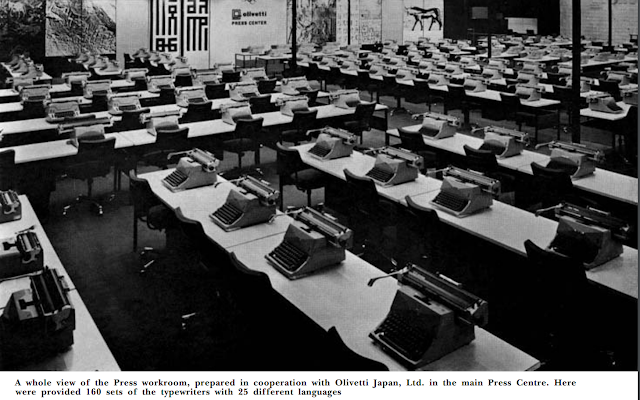 From the official Games report. 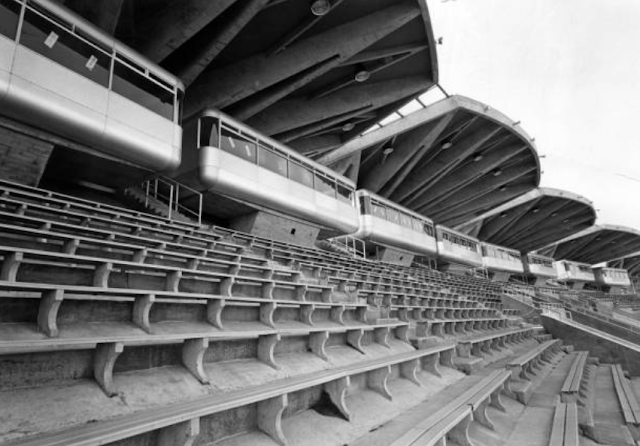 Press boxes of the Komazawa Stadium. 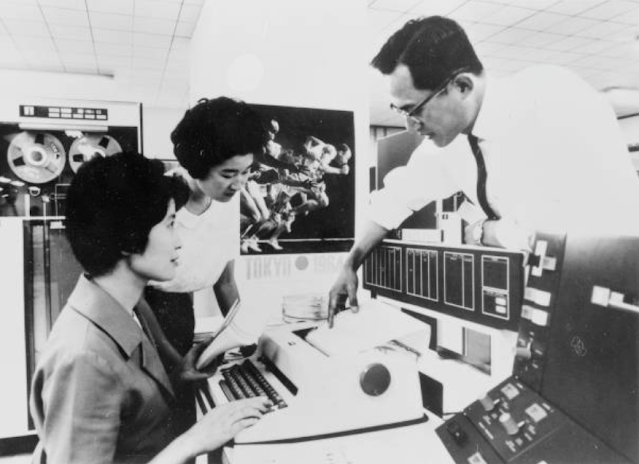 IBM also had a major input to Press facilities in 1964, providing an elaborate integrated system that sent results and other information to various venue press centres.
Olivetti got the naming rights to the Press Centre in Tokyo in 1964 because the Japanese typewriter industry was still in its infancy back then, and also because Olivetti had been associated with the Olympic movement since the Games in Melbourne in 1956, and had supplied typewriters at its home country Olympics in Rome in 1960. By 1964 Olivetti had established its own Japanese offshoot. The Tokyo Organising Committee’s official report notes that Olivetti Japan Ltd supplied more than 800 typewriters to various Games venues and facilities, with 24 different language keyboards. The Games were covered by 1153 accredited journalists, including 79 from the United States alone. Agence France-Presse, whose office can be seen below here, had 20 journalists, the same as UPI and Reuters; AP had 25.

THINGS THAT WON’T BE SEEN AT THESE TOKYO OLYMPICS 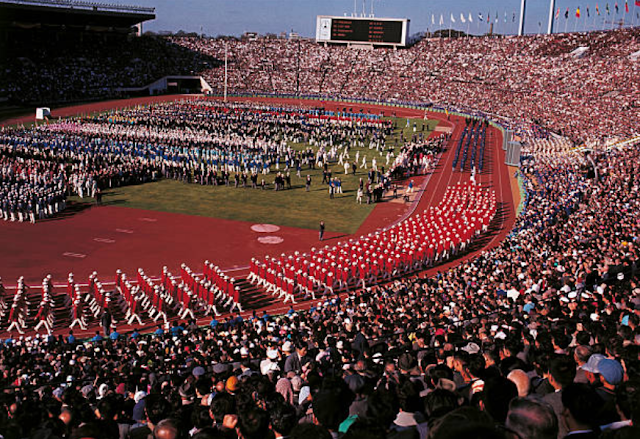 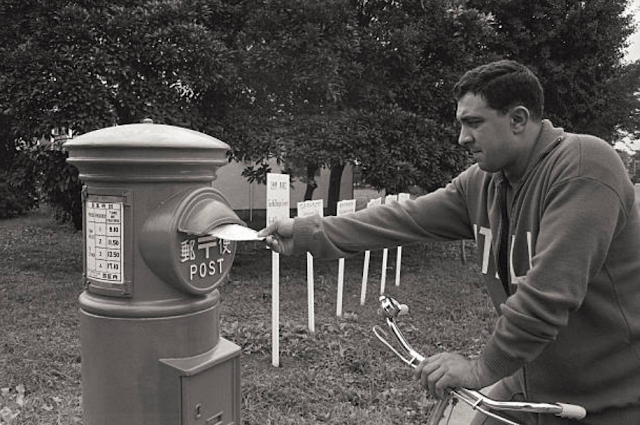 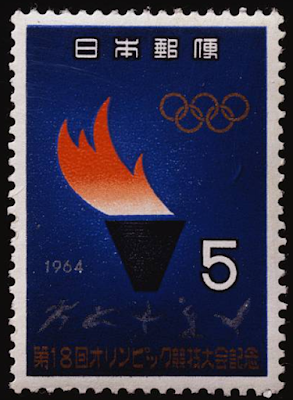 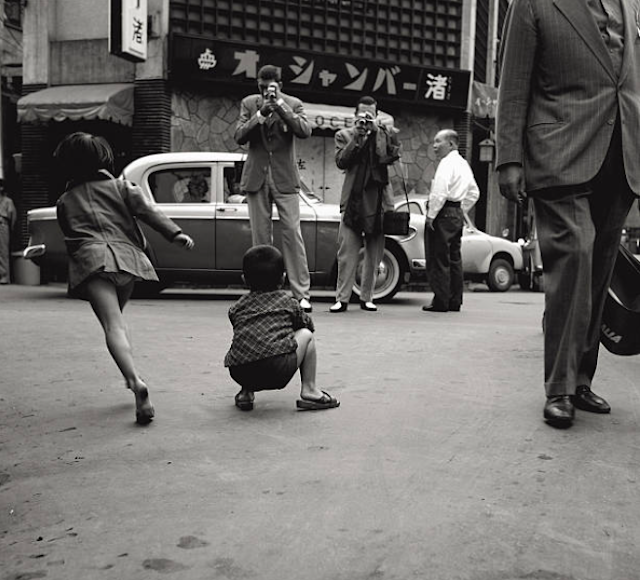 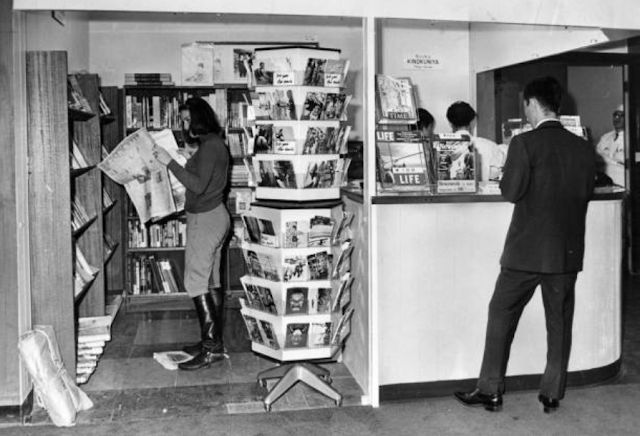 A real newsagency in the Olympic Village, with real newspapers and magazines. The Kinokuniya Bookstore. 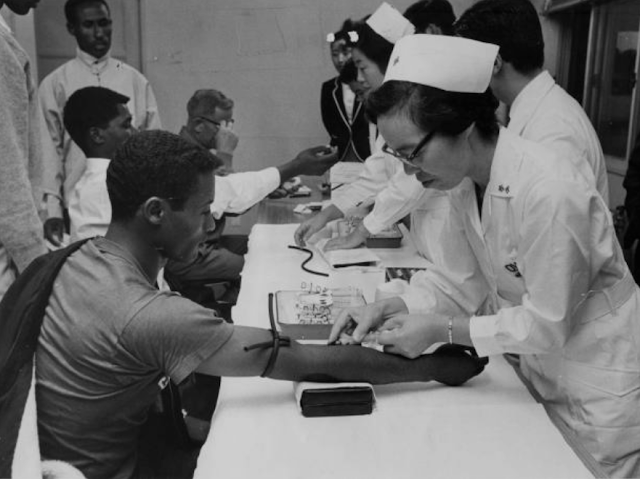 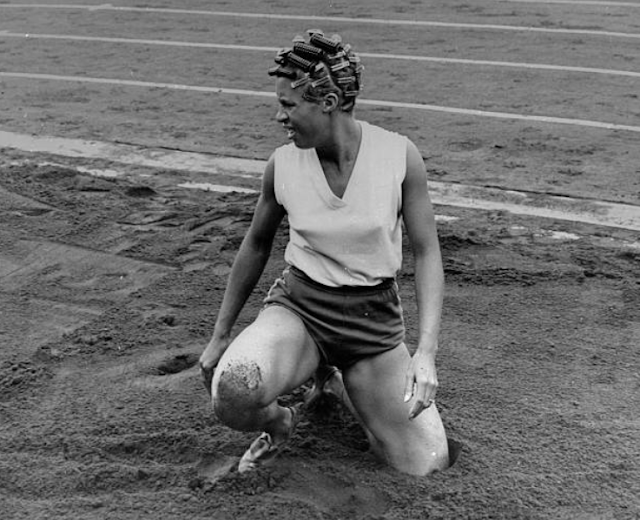 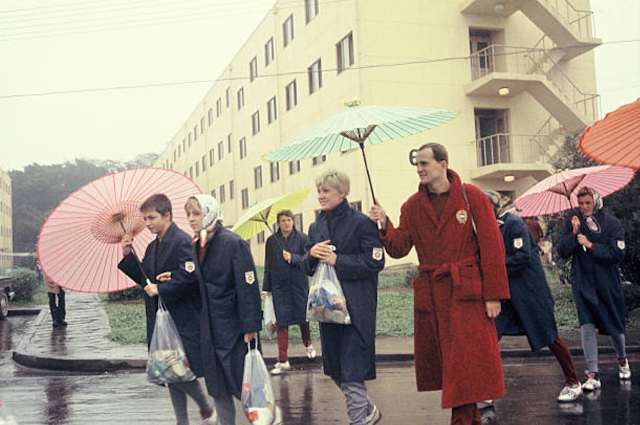 Athletes wearing bathrobes outside in the rain (or using lovely umbrellas like these). 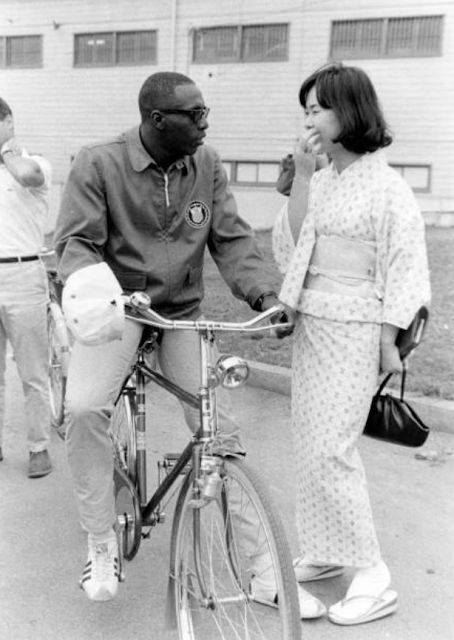 Bobby Hayes, about to win the Blue Riband 100 metres and to make millions playing football, riding an ordinary pushbike around the village and stopping to chat to locals. 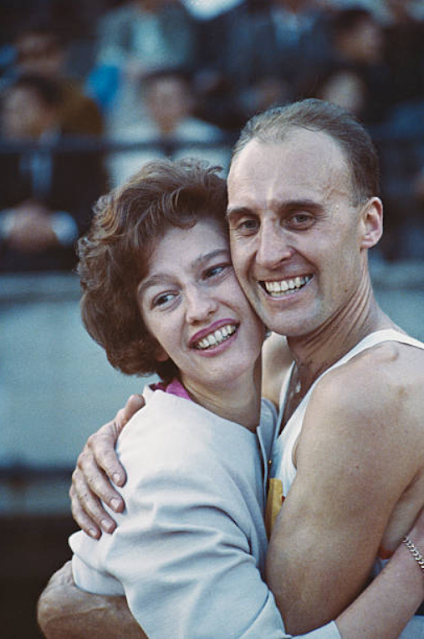 Wives, like Sheila Matthews, being able to get on to the Main Stadium track to hug their gold medal-winning husbands, such as British 20km walker Ken.

A bunch of Kiwis being able to get trackside to perform a celebratory haka after countrymen Peter Snell and John Davies (below) finished first and third respectively in the 1500m.

Two New Zealanders winning medals in the one race, and stopping to smile and shake hands with the silver medallist. 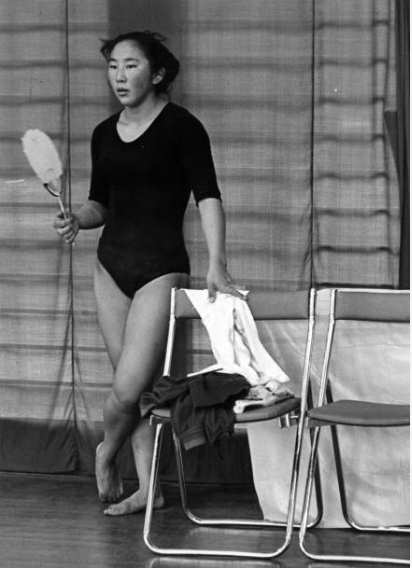 A gymnast from Mongolia, like Yadamsurengiin Tuyaa, being able to represent her own country. 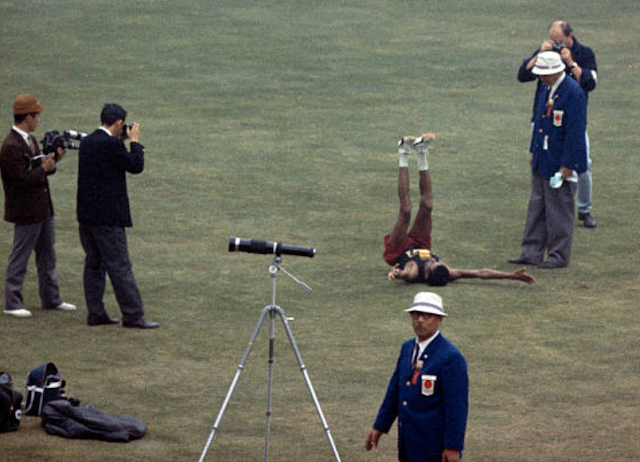 The winner of the marathon, having run 26 miles and 385 yards in a tad over 2 hours 12 minutes, doing calisthenics after crossing the finish line, as Ethiopia's Abebe Bilika did. 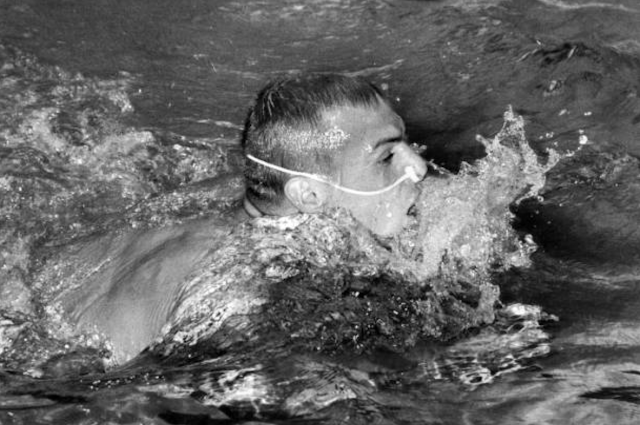 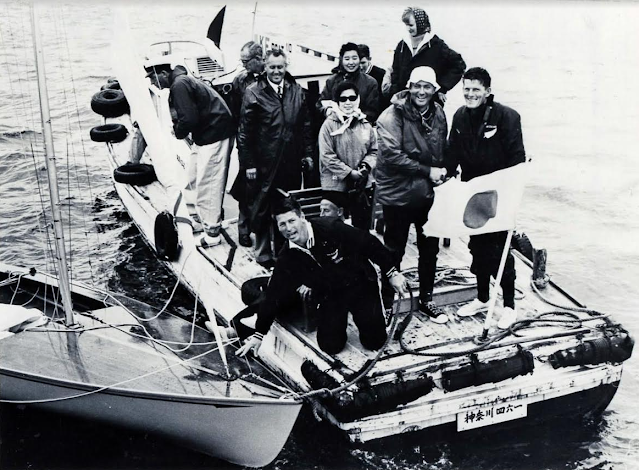 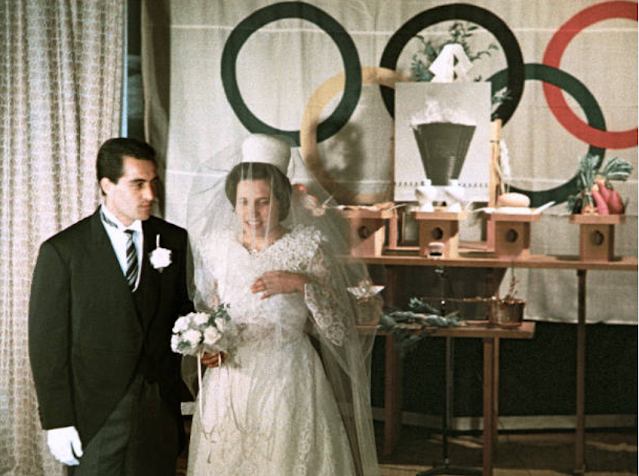 An Olympic Village wedding: Bulgarian athletes Nikolai Prodanov and Diana Yorgova tie the knot in the first wedding inside an Athletes' Village, conducted in front of the Olympic flag in the traditional Japanese style by a Shinto priest. 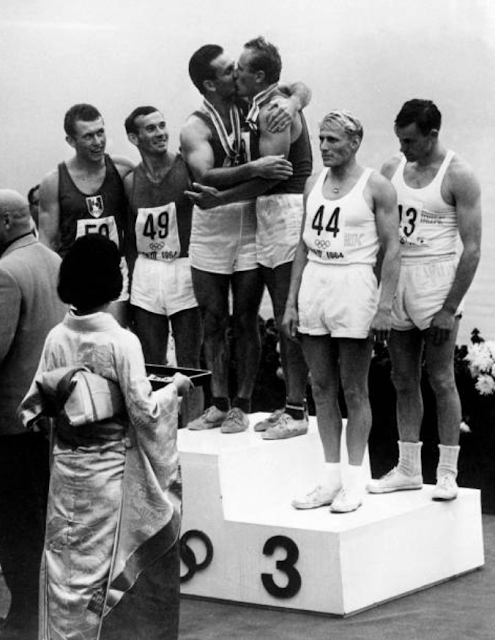 Kissing teammates: Above Soviet kayakers Andriy Khimich and Stepan Oshchepov get into a passionate hug and kiss, and below Italian cyclists celebrate. 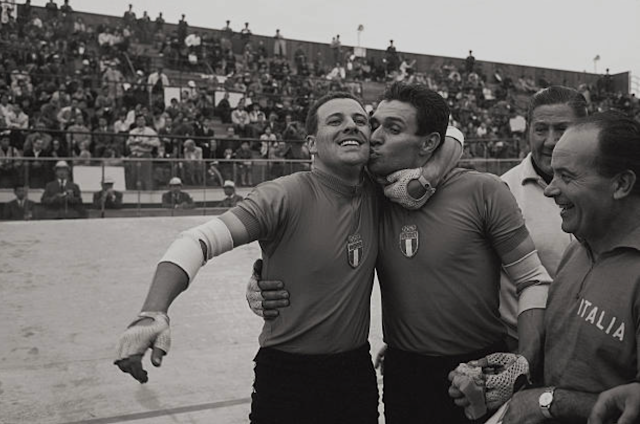 And, afterwards, you definitely won't see an Olympic movie poster which makes this sexist claim!: 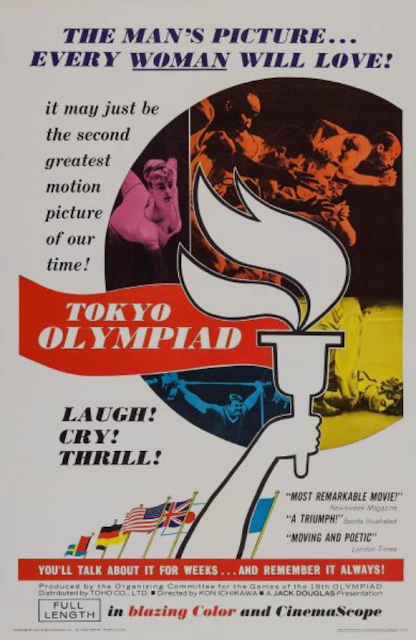 Posted by Robert Messenger at 15:29

The Olympics this time will look like the empty press box of 1964.
Great reporting Robert.

The "second" greatest motion picture of our time? I'm missing something!