Give Her A Typewriter: 'Pegge Parker' and the CIA's First Atomic Spy 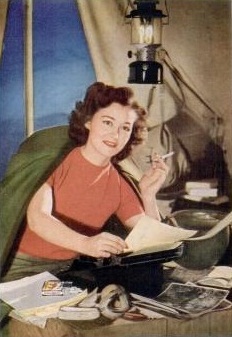 This image of 'Pegge Parker' at her Corona portable was taken for a Camel advertisement in 1943. 'Pegge', however, was not a smoker. Nor would she have claimed, I think, to have been an "ace war reporter".
"Unexpectedly, one day I received a phone call from New York, from the William Esty advertising agency. Would I pose for a Camel cigarette ad? I was a small-town Harrisburg girl who had never learned to smoke. Not with an air, looking like Lauren Bacall, that is. So I told the ad lady, 'I’d love to, but I don’t smoke!' As though that had anything to do with posing for a cigarette ad! 'You could try, dear,' she responded crisply. 'We’ll put you up at the Plaza and supply your wardrobe. Should take only one day of shooting, okay?' And so I became a back cover girl, earning a dishonest dollar advertising cigarettes I have never smoked! The windfall of the ad gave me not only unexpected mad money, but a terribly restless urge to buy a ticket to somewhere - somewhere far from the too-muchness of Washington." - 'Pegge Parker'
Other images in the advert were taken during training exercises with the 10th Armoured Division and Paratroop School in Fort Benning, Georgia. The full advertisement, as it appeared in LIFE magazine on October 23, 1944, is shown here: 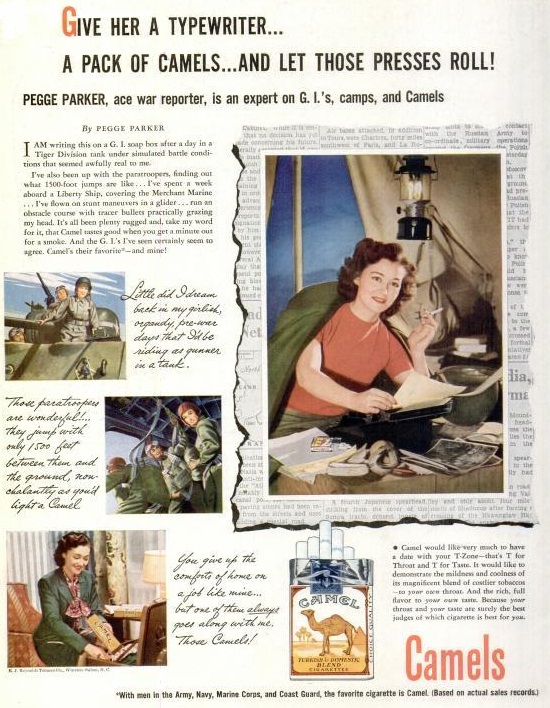 'Pegge Parker' was one of those remarkable women whose fascinating life stories have evidently flown under Wikipedia's radar. What references there are to her on the Internet are in the main extracts from books which were written by her and about her and published by her second husband, Omaha journalist John Hlavacek (1918-). See here and here. (Parts of 'Teen Topics, a collection of Parker's early Harrisburg Telegraph columns, can be seen here.) 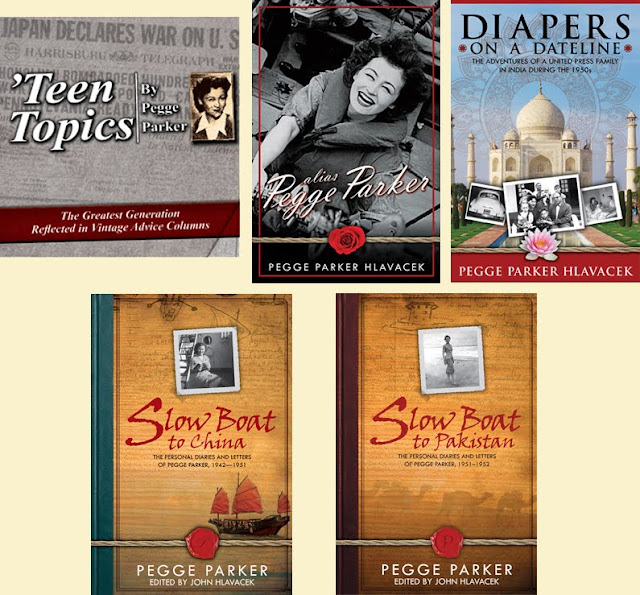 Parker's first husband, Douglas Seymour Mackiernan, was killed in Tibet on April 29, 1950. He was the first CIA agent to be killed in the line of duty and the agency's first atomic spy (a fact hidden from the public for 58½ years). 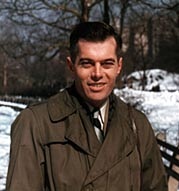 Douglas Mackiernan, New York, 1949
Mackiernan's collection of intelligence about the Soviet Union's first atomic bomb (tested from 1949 just across the north-west China border at the Semipalatinsk Test Site in Kazakhstan) was first revealed in 2000 when the first star on the CIA's Wall of Honor was acknowledged to belong to Mackiernan in a secret memorial ceremony (with 'Pegge Parker' present) at the CIA's Langley, Virginia, headquarters. It was openly confirmed by the CIA in October 2008. In 2003, journalist Thomas Laird published a book titled Into Tibet: The CIA's First Atomic Spy and his Secret Expedition to Lhasa. Details of this can be seen here. 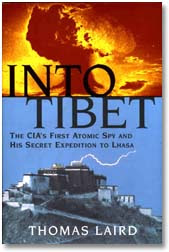 Part of the story is also covered in The Book of Honor (2001) by Ted Gup - without any mention of Mackiernan's work as an atomic intelligence agent. Nineteen days before the first Soviet test, on August 10, 1949, Mackiernan had sent a classified, coded message to Secretary of State Dean Acheson in which he acknowledged he was operating long-range atomic explosion detection equipment. 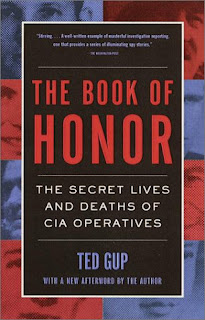 Here are 'Pegge' and Mackiernan (1913-50) photographed together in Tihwa (or Dihua), Sinkiang (now Ürümqi, the capital of the Xinjiang Uyghur region of China, in the north-west of the country) in 1947: 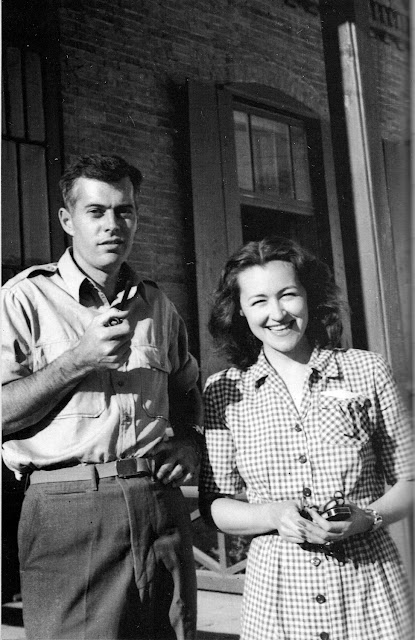 Mackiernan was killed by Tibetan border guards as he and his party were escaping from north-west China ahead of the Communist takeover. Mackiernan's death left 'Pegge' a widowed mother of fraternal twins, Mike and Mary Mackiernan. The babies were born in Shanghai in September 1948 and six weeks later the family was evacuated on a Pan-American flight just ahead of the entry of the Communists into Shanghai. Mackiernan returned to his post at Tihwa and Pegge never saw him again. Here is a front-page image from an American newspaper in April 1950: 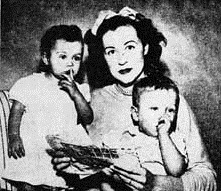 With little pension to support herself and her two children (who had been sent back to Boston), 'Pegge' took a job offered to her by the US State Department as Vice-Consul for Public Affairs at the American Consulate in Pakistan (the cover her husband had used in Tihwa). At a meeting of Pakistani newspaper editors in Lahore in the autumn of 1951, she met United Press International bureau chief in India and Pakistan, Hlavacek. They were married in Bombay in 1952. Not only was Pegge reunited with her twins, but the Hlavaceks were to have three more children. Hlavacek had taught English in China from 1939, after graduating from Carleton College. He then joined UP in 1944 as a war correspondent. 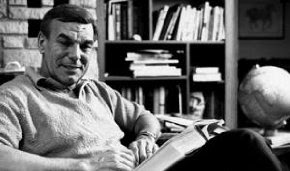 'Pegge' was the younger daughter of a middle-class Catholic family (her father, Martin James Lyons, was a bookkeeper and auditor). She was born and grew up in Harrisburg, Pennsylvania. After graduating from John Harris High School, she went to New York with the dream of following a family tradition and becoming a teenage actress. Her mother, Agnes Florence Lyons, had been a child actress and her grandparents were actors on Broadway. 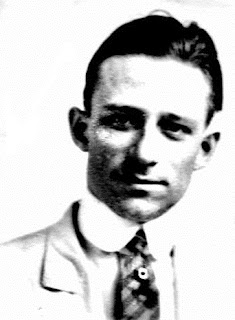 Harry Witwer's 1917 passport photo
Her uncle on her mother's side was Harry Charles Witwer (1890-1929), author, humorist, scriptwriter and comic strip creator. Witwer began working as a butcher's errand boy, became a bellhop and soda jerk on Broadway and later a prizefighter's manager. He went on to write for the St Cloud Tribune in Florida in 1911, the New York American (1913) and until 1915 the Brooklyn Eagle, Elizabeth Times, Atlanta Georgian, Newark News, the New York Mail and The Sun. In 1917 he was sent to France by Collier's Weekly magazine as a war correspondent. 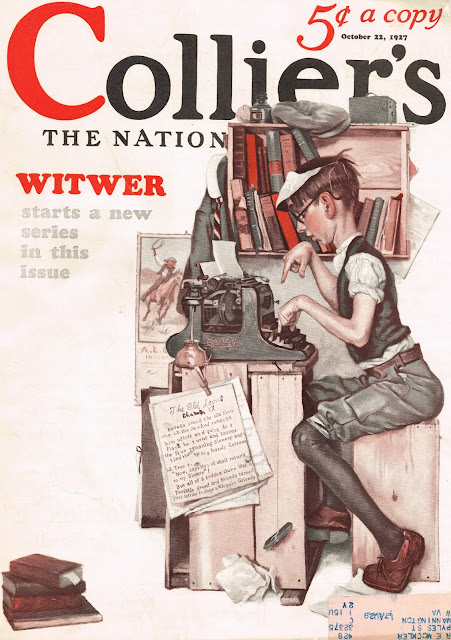 He also wrote for McClure's. Witwer was to be described as one of "America's wittiest idiomatic stylists". 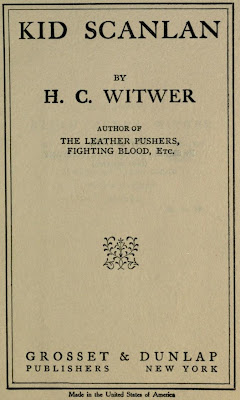 When she reached New York in her teens, aspiring actress 'Pegge Parker' had a stint as a Powers model, worked for Bell Telephone and wrote radio scripts for the Woman’s Home Companion.

"I began writing blurbs for a big advertising supplement promoting furniture. No one cared what I wrote, as long as I wrote fast, clean copy, reasonably well spelled. But I cared.
Furniture was not quite the holy grail of my soaring ambition. I barely knew a picnic table leg from Sears from a tip-top table by Hepplewhite, or a Chippendale from a Phyfe, but I really plunged into furniture as though a PhD depended on it. It really was a thesis. I have never recovered from the furious thoroughness of that ﬁrst furniture assignment. I have, in fact, continued my furniture research to this day." - "Pegge Parker"
In 1940, still just 20, she returned to Harrisburg and after writing a series on furniture for an advertising section was offered an advice column for teenagers in the Harrisburg Telegraph.  ‘Teen Topics appeared under the pen name Pegge Parker, “because everyone had a Parker pen”. 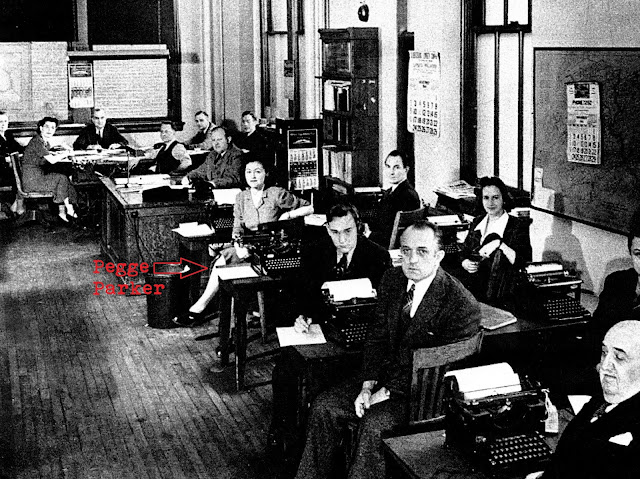 The Harrisburg Telegraph editorial office in November 1941, with teen advice columnist 'Pegge Parker' in the centre of shot.

After writing more than 700 daily columns (six a week), Pegge took her clippings to Washington in 1942 and was hired as a night reporter on the Washington Times Herald. Within six months she had been promoted to Women’s Page editor.

The next year, eager to escape the "too-muchness" of Washington, Pegge wanted to join the Red Cross and work overseas, but the minimum age was 25. However, she soon found a use for the money she was paid for the Camel ad. "Eventually I chose one of the few places where there was no war going on: Alaska. I went to Fairbanks ... to a city staff of exactly two, on the Daily News-Miner. The paper’s banner read 'America’s Farthest North Daily Newspaper' ... In my day we got out four pages, Monday through Saturday, and the paper sold for a dime." 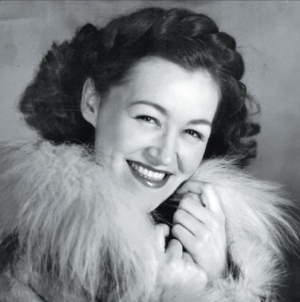 Fairbanks was a hub for wartime planes and supplies to the Soviet Union, and Pegge interviewed celebrities who travelled through there, such as Lillian Hellman and champion boxer Joe Louis. She ventured to the Aleutian Islands and the North Pole. Pegge wrote a story for Reader’s Digest about a lottery awarding a cash prize to anyone guessing the exact time the ice breaks on a river. The payment bought her a ticket for a slow boat to China. She sailed to Shanghai and worked with the military, travelling to Saigon, Manchuria and north-west China, where she met and later married Mackiernan. The New York Daily News picked up stories she filed from the Great Wall, Shanghai, Peking and the frontier mountain regions. 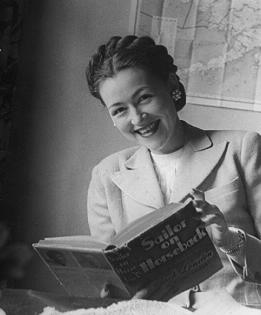 After Pegge married John Hlavacek, the couple remained in India, mostly living in a Bombay hotel room which doubled as office and home, until 1957, when they moved to New York. They subsequently travelled extensively, all the while continuing to work as journalists and broadcasters. They filed from throughout Europe, the Middle East, Central and South America and Vietnam. In 1961 they moved to Florida, when Hlavacek was staff correspondent for NBC in Havana. NBC’s “Monitor” program carried Pegge's radio reports from Cuba just before the Missile Crisis. The couple were based for three years in Jamaica, where Pegge was a Time-Life correspondent.  Finally they settled in Hlavacek's home state of Nebraska. 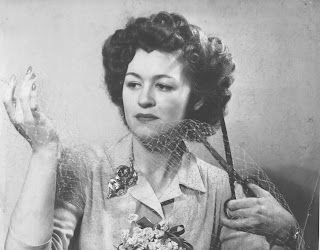 After suffering from Alzheimer’s disease for nearly a decade, Pegge died in Omaha. Hlavacek was quoted in the Omaha World-Herald as saying, “She was a pioneering woman, almost completely self-taught and was especially a stickler for correct grammar. She kept notebooks filled with new words she heard in conversation or discovered in her reading, complete with dictionary meanings and derivations.” 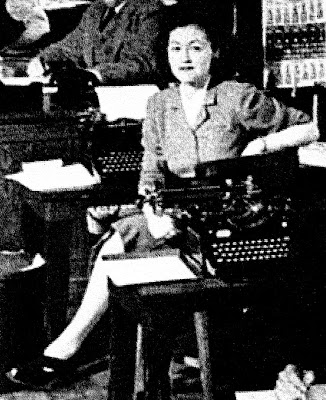 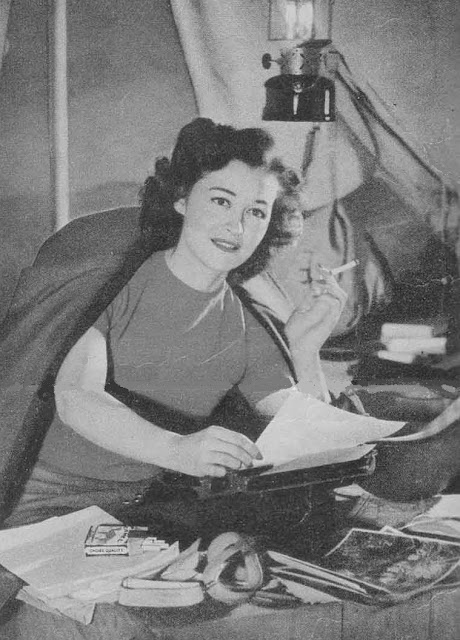 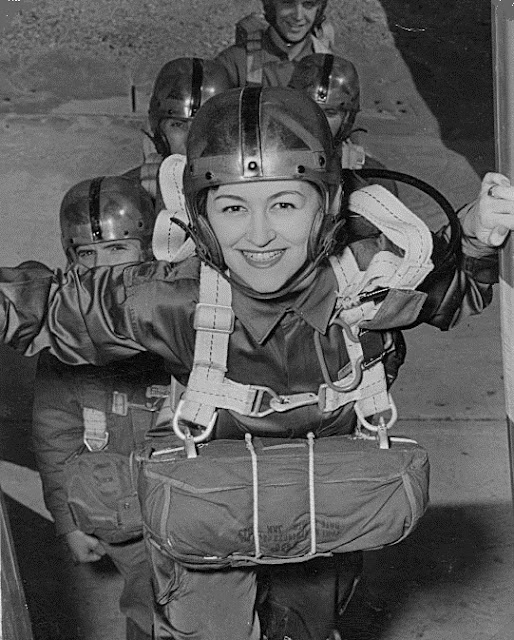 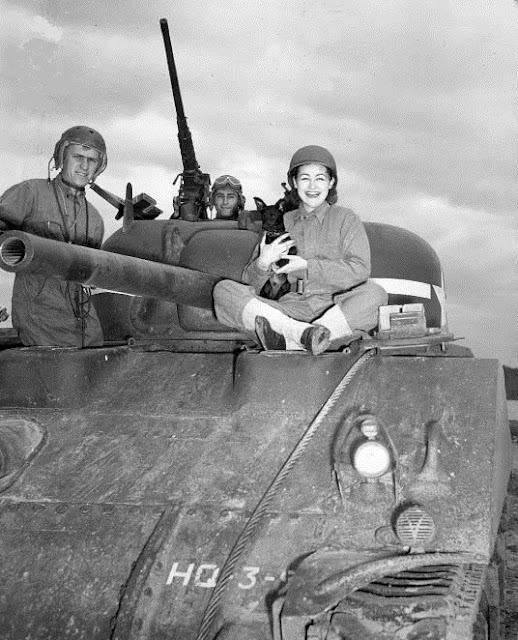 Posted by Robert Messenger at 15:44

Wonderful write up Rob! This is great.

A very interesting article. The story of her first writing job - the furniture ad - is the clue to her success, i.e., a wired-in need to complete assigned tasks as well as possible, even if just an OK job would do.

What a story! What a woman!

I like the cover of Collier's (Rockwell?) with a Fox masquerading as an "Ajax."

Simply amazing account of Pegge's life. I am working with Mr. Hlavacek on the 12th book about their lives. He turned 95 in March and is as spry as many of the 50 year old authors I work with. I met Pegge after she was in the more advanced stages of Alzheimers, but she was graceful, gracious and interesting even then. Their books are available from hluckybooks.com, and he would love to hear from your readers. His email is hlavacek@conciergemarketing.com.

Thank you Scott, Tony, Richard and Lisa for your comments.
Lisa, I have had an email from John and have replied to it with my address in Australia, as requested. This blog gets around 1400 visits a day, so hopefully some will have had their attention drawn to the books.
I hope the 12th book works out well. I look forward to hearing about it.
I only came across Pegge because by sheer chance I stumbled on the colour advert while looking for something entirely different - something on Mary McCarthy!
Thank you
Robert Messenger
Canberra, Australia

Unfortunately Tom Laird's book on Pegge's CIA husband Mackiernan is mostly fiction. He did not warn Washington about the Soviet test. Gup's account is best.