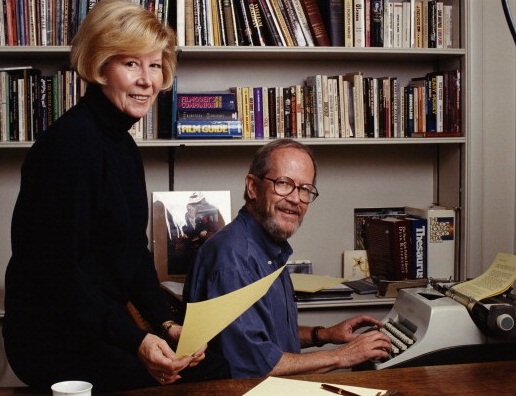 US novelist and screenwriter Elmore Leonard at his Olympia SG3 typewriter, with wife Christine Kent, in Detroit, 1992
ETCetera editor Alan Seaver yesterday drew my attention to the death of Elmore Leonard. I was deeply saddened to hear this, as I am a greater admirer of Leonard's writing.
Martin Amis told Leonard at a Writers' Guild event in Beverly Hills in 1978, "Your prose makes Raymond Chandler look clumsy." Who would argue?
Elmore John Leonard Jr was born in New Orleans on October 11, 1925. He died on Tuesday, aged 87, at his home in the Detroit suburb of Bloomfield Hills. He had suffered a stroke on July 29. 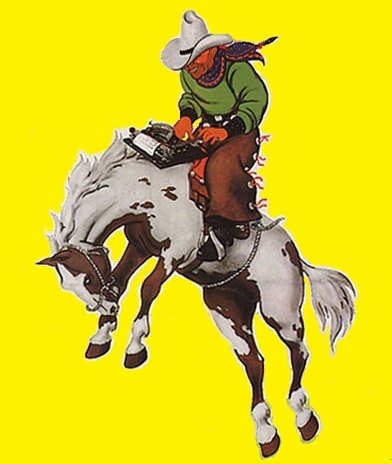 Leonard's earliest published novels, in the 1950s, were Westerns, but he went on to specialise in crime fiction and suspense thrillers, many of which have been adapted into motion pictures. Among his best-known works are Get Shorty  and Rum Punch (adapted for the movie Jackie Brown). The 1967 film Hombre starring Paul Newman was an adaptation of Leonard's novel of the same name. 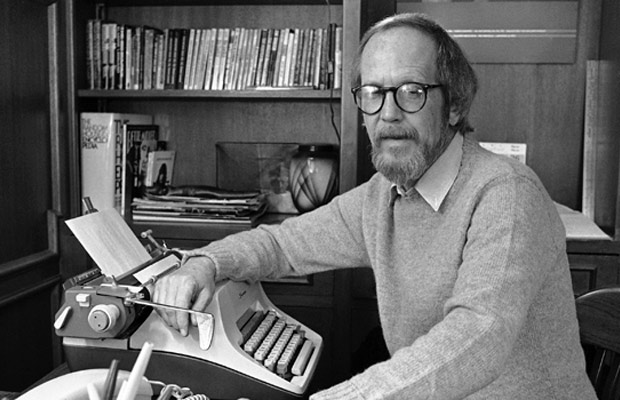 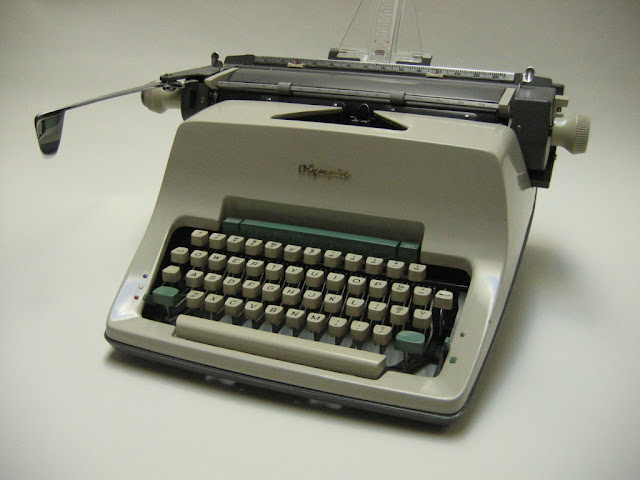 I love that illustration of the typewriter wrangler! I especially like the photo showing both Leonard and his wife, in a pose that clearly sends the message that she was an important editor/critic. Anything I attempt that is going to go public is handed to my wife first. Although her critique may sting a bit at first, the results are always beneficial.

What a beautiful SG 3 (an early model, with the green shift keys, like the one Tippi Hedren used in Hitchcock's Marnie). The "S" model, with the paper injector/ejector handle on the right side of the carriage makes great drrrrrrt sound as you crank a sheet in or out.
I just started rereading Leonard's 1953 classic short story, Three-Ten to Yuma and checked out Freaky Deaky at the local library for reading tomorrow.
Vale Elmore Leonard indeed.

Lovely tribute. We'll alaways have his 10 Rules to help keep us on the straight and narrow.

Great Tribute, but just want to let you know that isn't Christine Kent. It may have been his 2nd wife, (Especially since it looks like an older photo) who passed away, but it's definitely not Christine.

Hello, Robert. I am from Argentine. I wanted to ask you if you could make a blog post about typewriters with paper inyector, like the Olympia sg3. Thanks.