ROOYPLEY'S BELIEVE IT NOT!
Three typewriters, all in their cases, stacked on top of one another.
The total height?
5 ¼ inches!
The height of an average coffee mug. 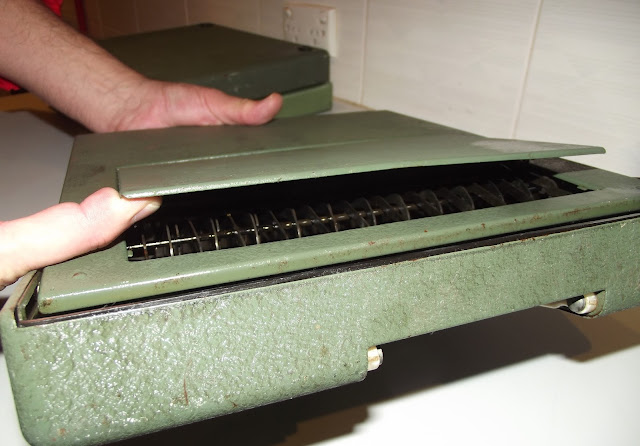 POSTSCRIPT: Kind comments from Miguel and Peter have lifted me to greater effort here. I forgot to show the trapdoor under the keyboard which drops down to give leverage  when the typewriter is in position for use on top of the case. Here is also a video of opening the case and the type action and typebar movement: 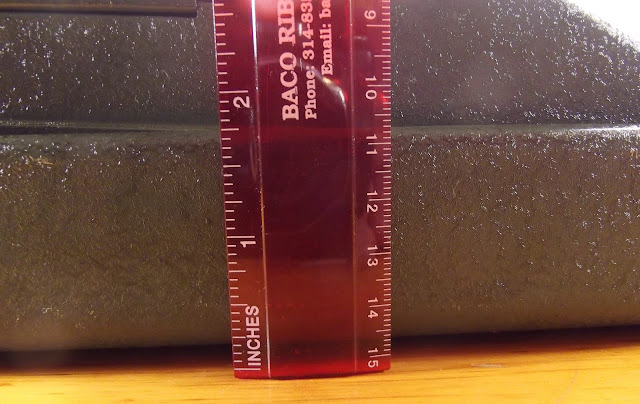 The body of the typewriter itself
is 1½ inches high! 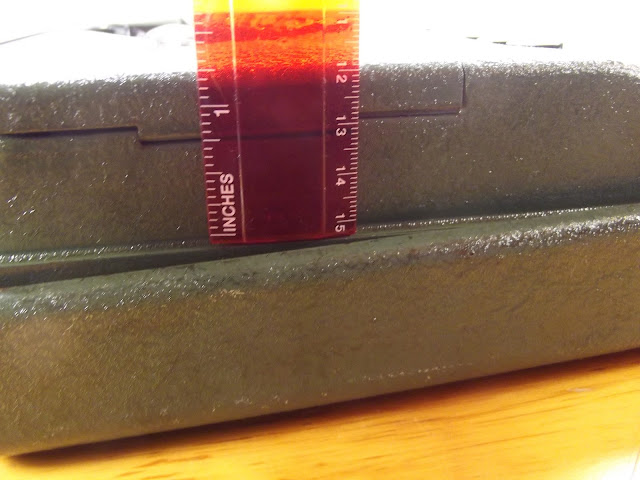 Two Rooys arrived from Yves Lenchon in France via Peter Muckermann in Germany today (thank you, Peter!), to join one sent to me by Richard Polt many years ago. I was able to measure the height of the Rooys using the Baco Ribbon & Supply Co ruler Richard sent me a couple of months ago, and weigh them with my new electronic kitchen scales: 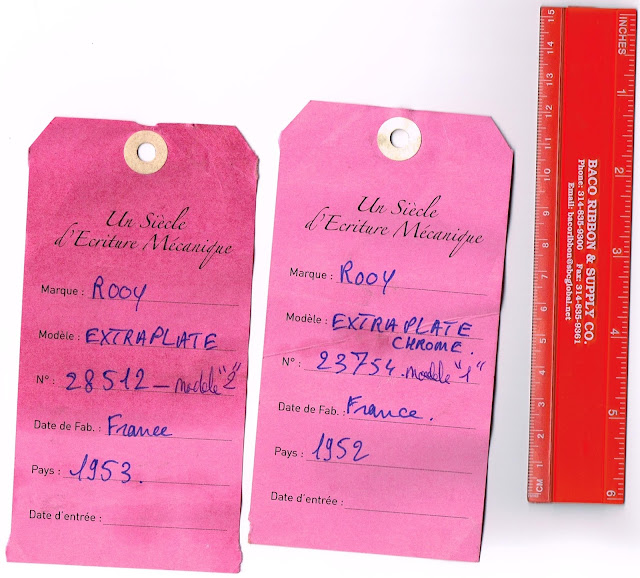 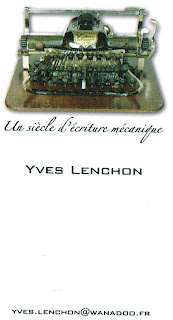 The arrival of the two 'new' Rooys was timely, as today this blog reached two milestones: 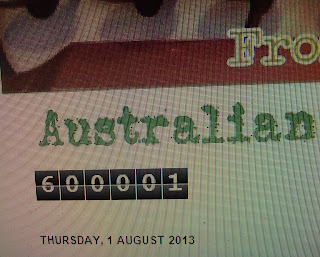 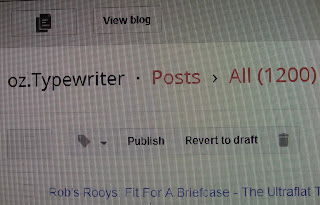 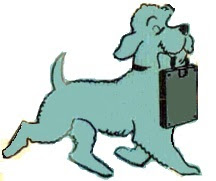 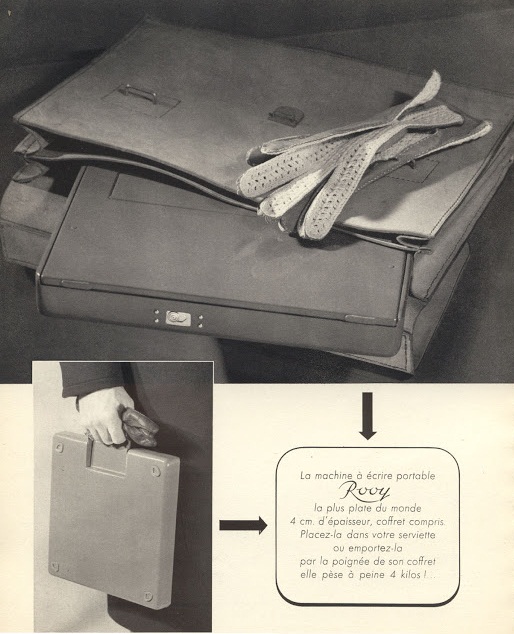 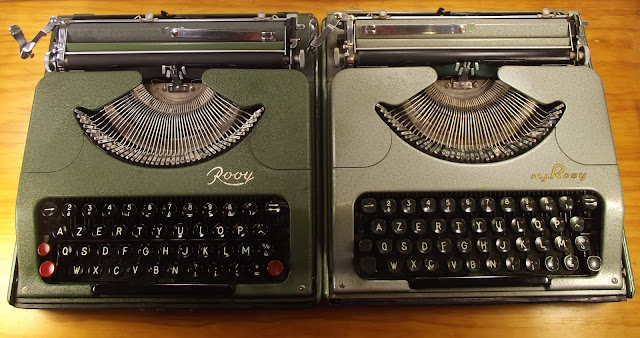 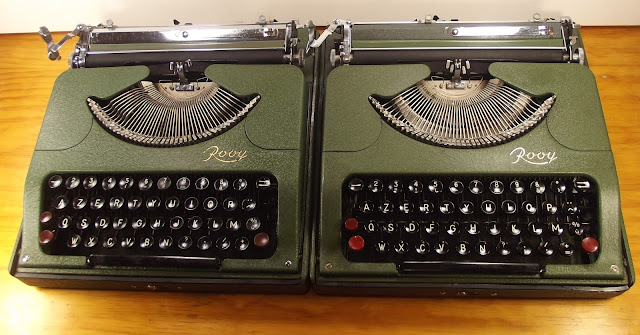 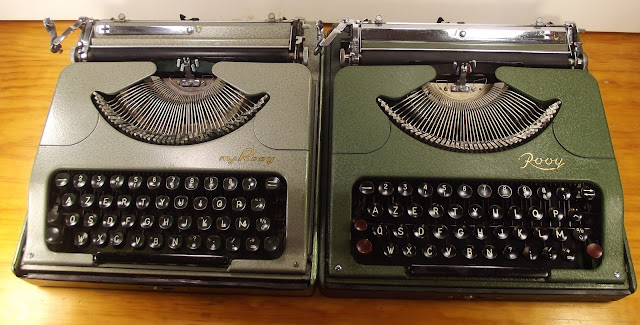 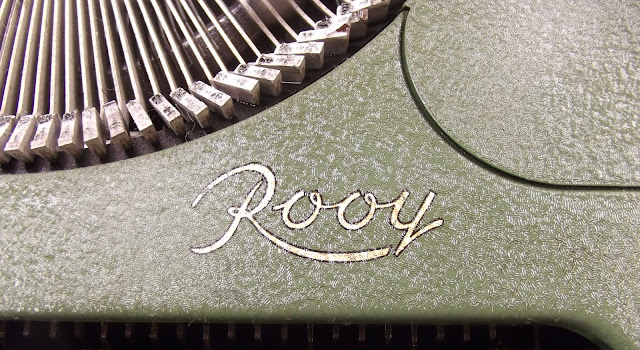 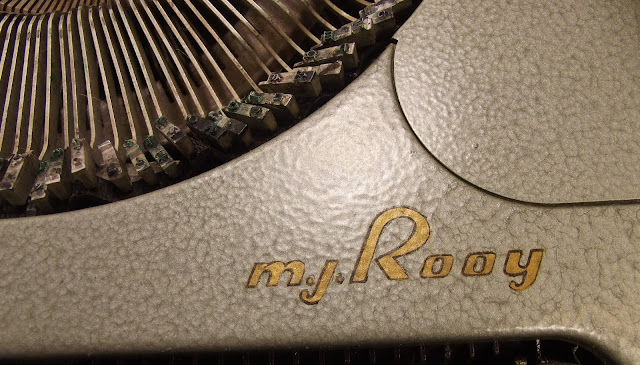 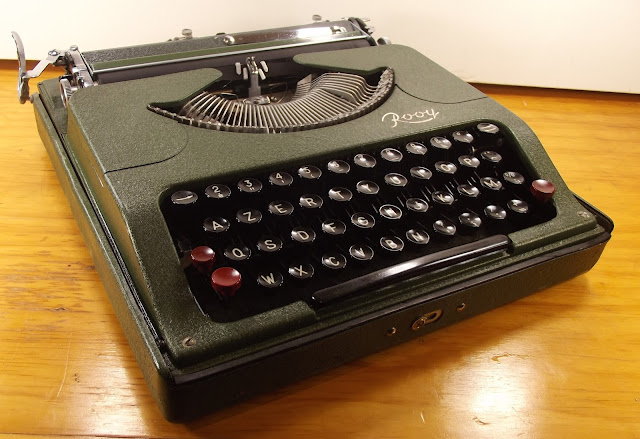 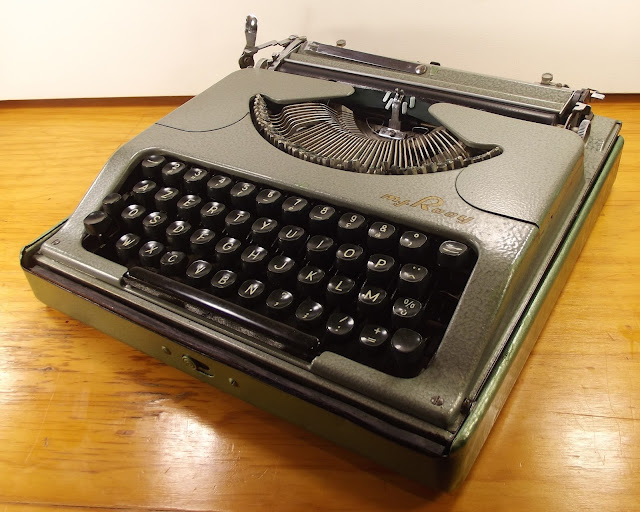 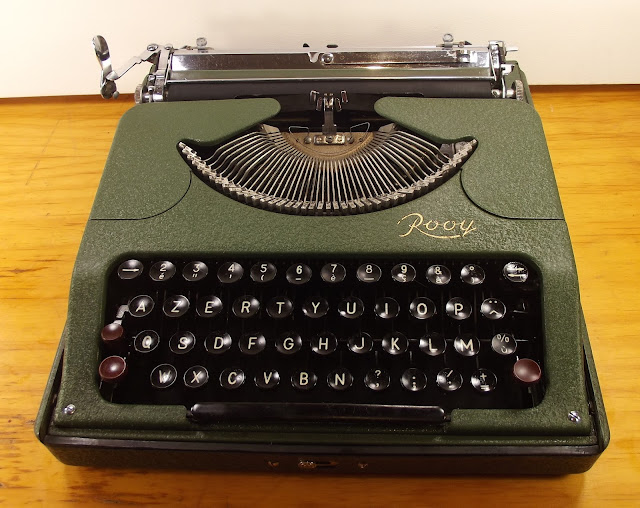 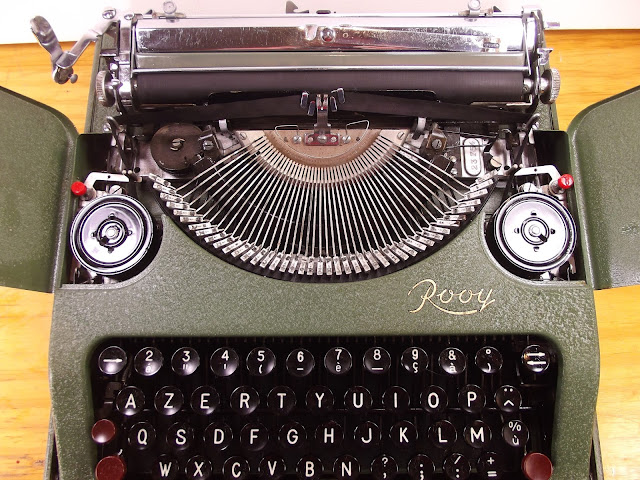 Joseph Borel's ingenious design for the tightfit mechanics of the Rooy (see patent below). Note the mainspring is left of the segment - the drawband runs across the front of the carriage. The outer typebars compensate for distance and angle of movement by having a "bow" in the centre of them = very clever!
In my typecast, please excuse the number of q's for a's, as I'm still getting used to the AZERTY French keyboard. 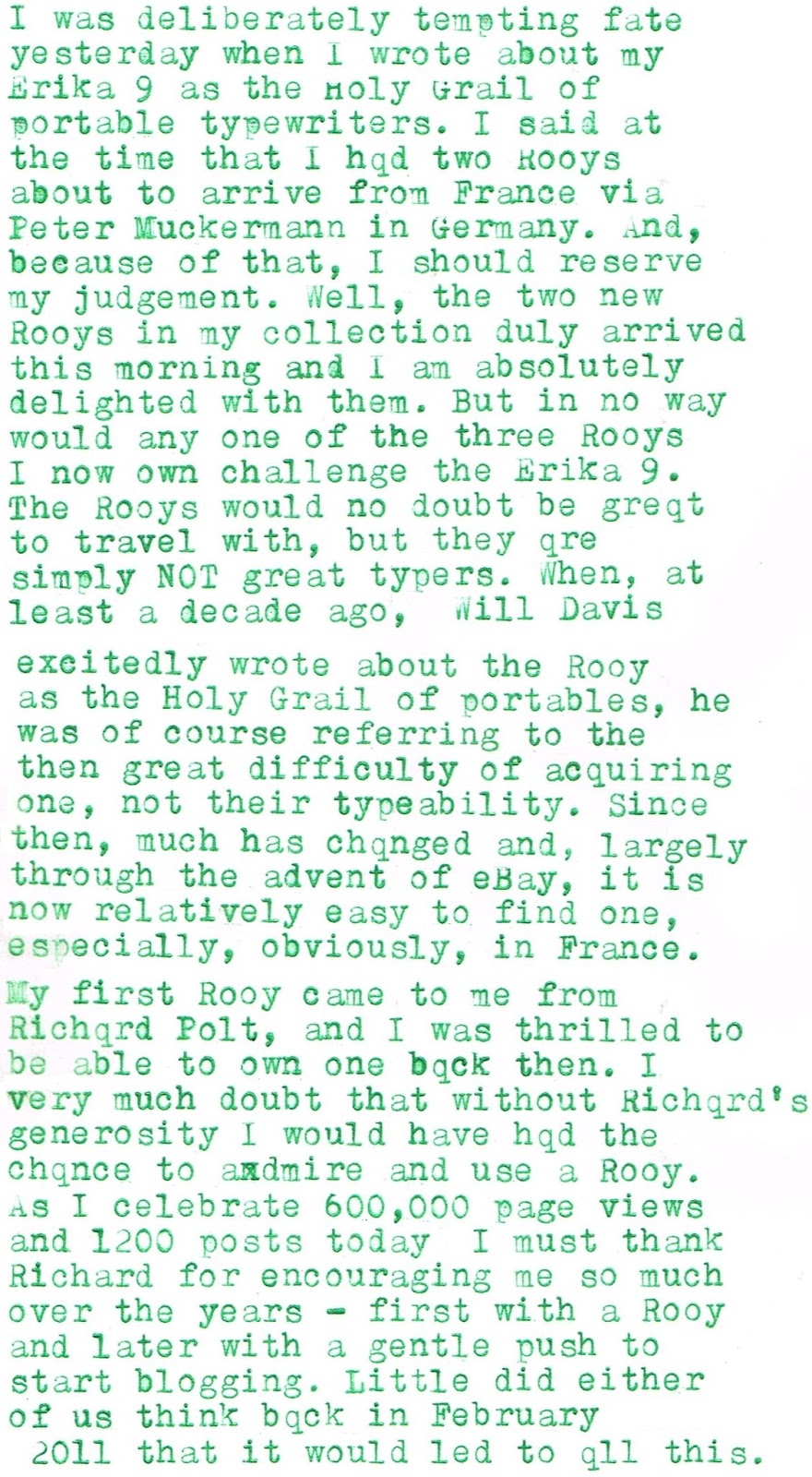 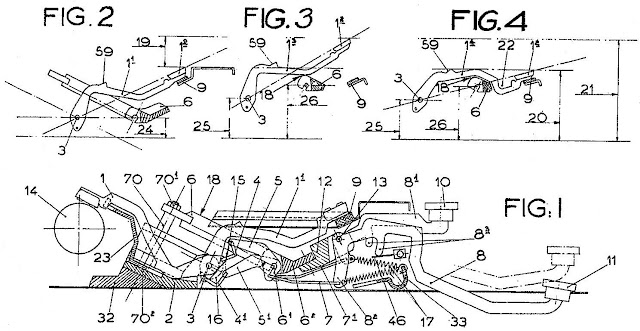 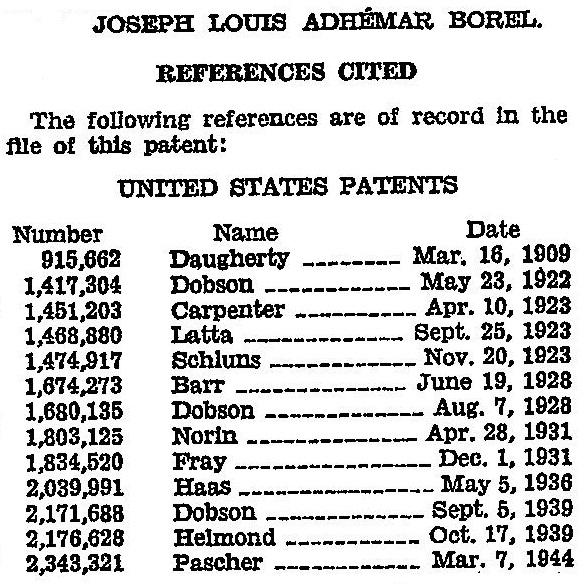 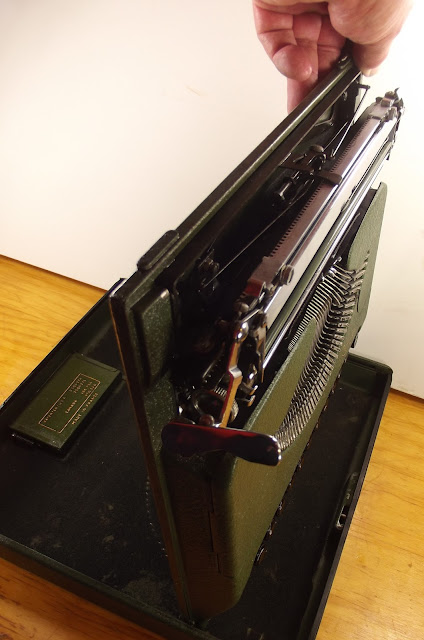 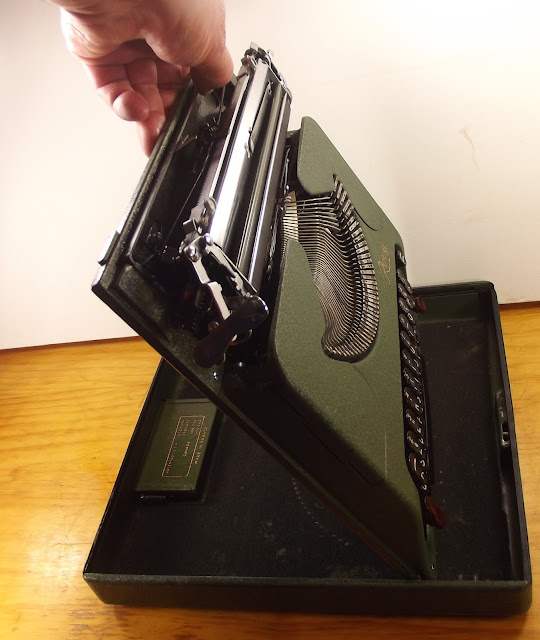 Posted by Robert Messenger at 16:08

Now I'm really impressed! This is exactly what I meant when I said I appreciate and admire the ingenuity that made possible these extraordinary machines. I'd never seen such a, should I say, ultraportable portable before! It almost looks like it was squeezed by a steam roller as part of the manufacturing process! Do you use it like that, or you have to raise the carriage somehow, say, a-la-Corona 3?

I think the ultraslim profile accounts for its relative lack of typeability, wouldn't you say? I imagine the typebars would have a really hard time hitting the platen consistently, particularly if they have to hit the platen at such a low angle; there must be just too little travel space for the keys and the typebars to build up enough momentum... but that's just a guess.

Amazing machines! I will read your earlier history of them as soon as I have a moment. I gather from the drawings that the machine must be elevated on its case lid for use, so the key lever can protrude below the bottom when the key is depressed?

Congratulations on the Rooys and 600K!

Hi Miguel and Peter. Thank you for your very kind comments in the past two days, they are much appreciated.
Your comments on this post have sparked me to greater effort and I have added a photo of the trapdoor under the keyboard (should have done that in the first place!) as well as a video of opening the case and the typing action.

Congratulations on reaching 600K visits, and thank you to Richard Polt for encouraging your entry into the blogging world.

600K visits would likely never have been reached had not the content of your posts been superior, and once again it has been enjoyable to read about something I'd previously no clue about. The little Rooy is indeed a wonder. I had no idea such a small typewriter had been made, thinking that machines like my Hermes Rocket, 1922 Remmington portable, or my lovely and just-received Triumph Tippa were the epitomy of tinyness. And not only do you present that fascinating little engineering marvel, but you have also somehow dug out interesting bits, like the patent drawing showing how the typebars need that space allowed by the trap door.

1200 posts - and I've only been following for a few months - so there is much more interesting typewriter stuff to catch up on.

And for heaven's sake, hopefully you can soon consign those two out of 4,330 comments to your mental dust bin; they are nothings, null, zeros, ciphers, as are their creators.

Ah, most certainly a classic and unique design. Congrats on your two new ones, and I'm glad I was able to provide the first.