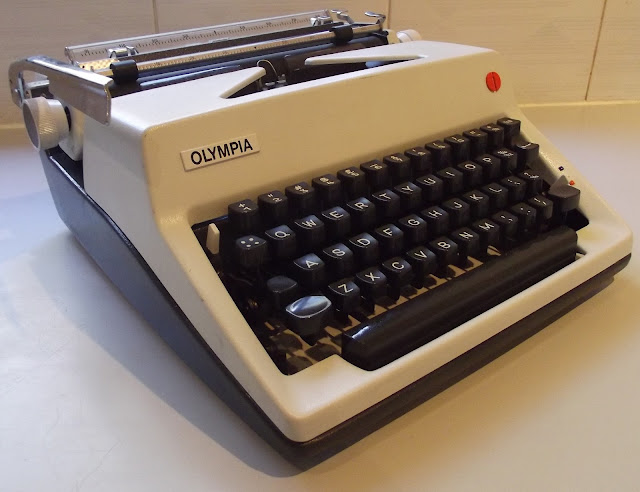 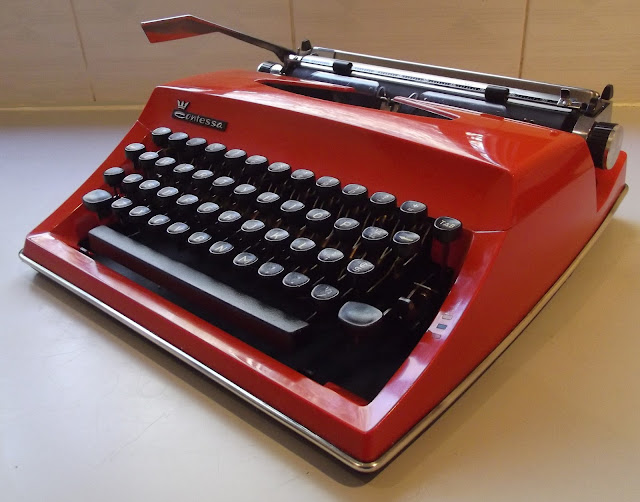 Triumph-Adler Contessa De Luxe
The dumping at my front gate on Friday of what cleaned up to be a perfectly good Olympia SM9, plus the arrival earlier that day of a "wedding reception reject" bright orange Triumph-Adler Contessa De Luxe - which I also found to work perfectly - got me thinking about other waifs and strays among typewriters I have sitting in cases gathering dust downstairs. 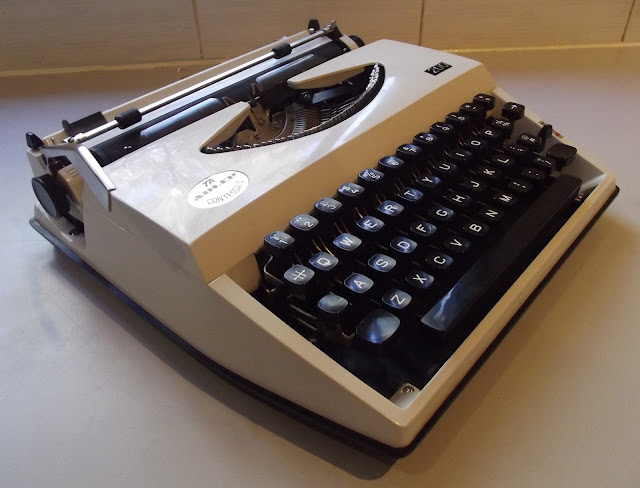 Adler Contessa II 200 (Made by Kofa in Taiwan)
After a cursory look around, I unearthed another Adler Contessa - in reality a Taiwanese-made Kofa 200 - and a Lemair Deluxe 250 TR (a Brother, of course). For good measure, I had another type with my Lagomarsino LP44, given that a few weeks ago I found out a little more about the history of this company through a 1909 edition of Typewriter Topics. 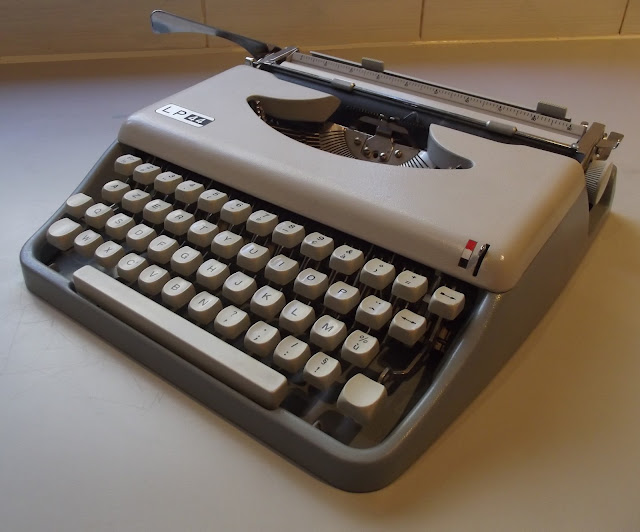 Lagomarsino LP44 (Antares Compact, made in Italy)
Happily, all five portables performed very well - I say that taking into consideration their neglect (in the last three cases, by me) and, in most instances, their built-in limitations. With the Kofa-Adler Contessa and the Lemair-Brother, I honestly have no idea how and when I acquired them, but they won't be staying with me for long - although the Kofa-Contessa does qualify, I suppose, as a "curiosity-breeding little joker" (given the Kofa connection). 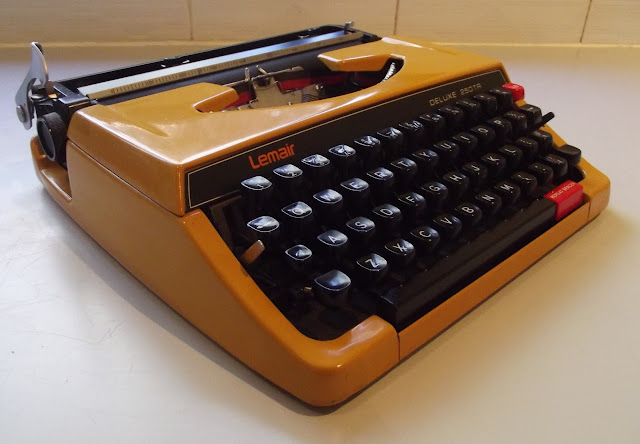 Lemair Deluxe 250TR (Brother)
The Kofa-Contessa brings back some uncomfortable memories for me. When I first started collecting typewriters, more than a decade ago, I grabbed everything and anything I could lay my hands on, mostly from a recycling centre and op-shops. I somehow managed to accumulate at least a dozen of these Kofa models. They were taking up a lot of space - with few if any redeeming reasons as to why I should keep them. So I decided to try to sell them. Being very new to eBay, and not understanding how it worked, I stupidly tried to sell six Kofa-Contessas as a bulk lot at a super-low price - without giving a lot of thought as to why a single buyer would want six or how he or she would collect them all. Not surprisingly, I didn't get a single bid. On reflection, I think I would have been lucky to get 99c each for them if I'd tried to sell them individually. Eventually I somehow managed to off-load them. Finding one more in my collection yesterday was a painful reminder of that embarrassment! At least I did learn a valuable lesson from it.
Let's start here with the unexpected, unannounced gift (from an anonymous donor) of an Olympia SM9 in what turned out to be excellent condition - once the gum leaves and redback spider's webs had been removed: 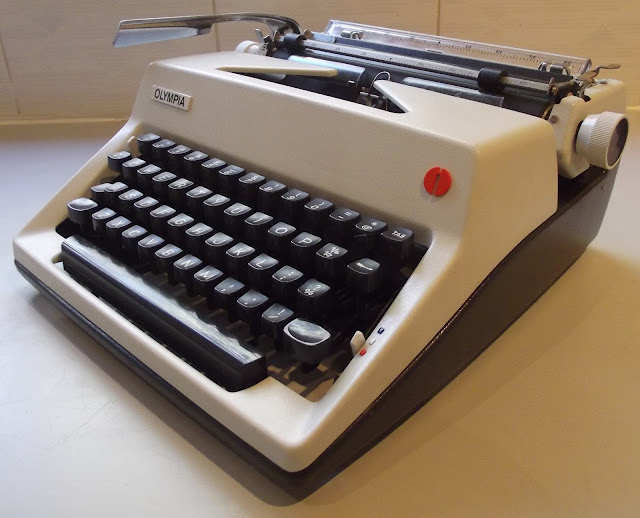 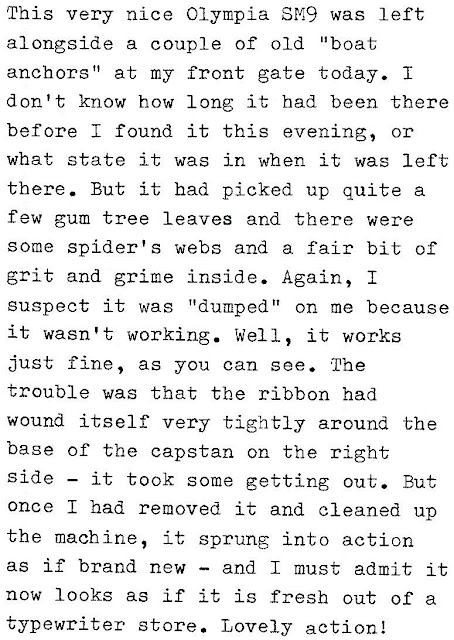 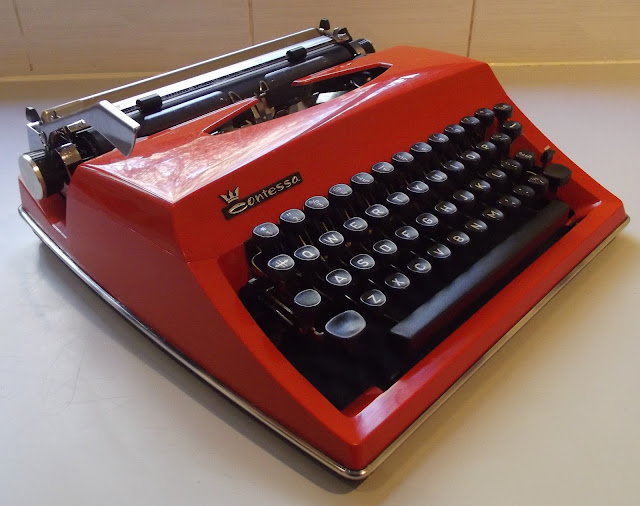 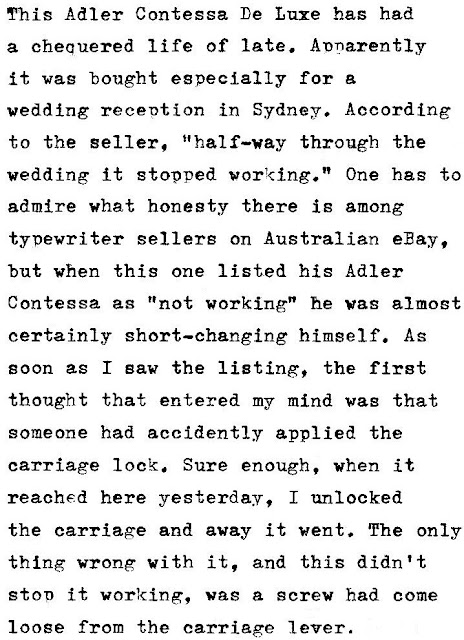 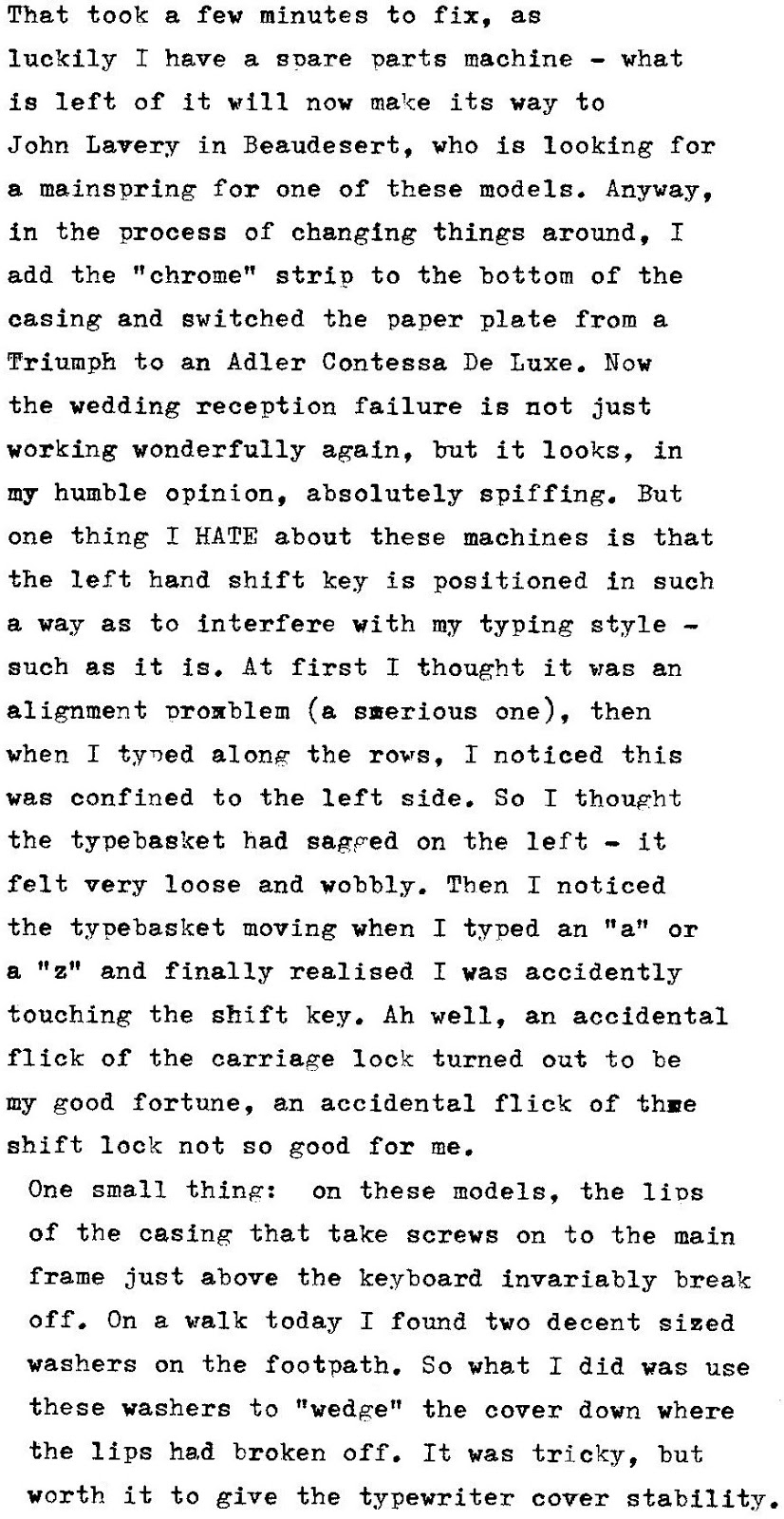 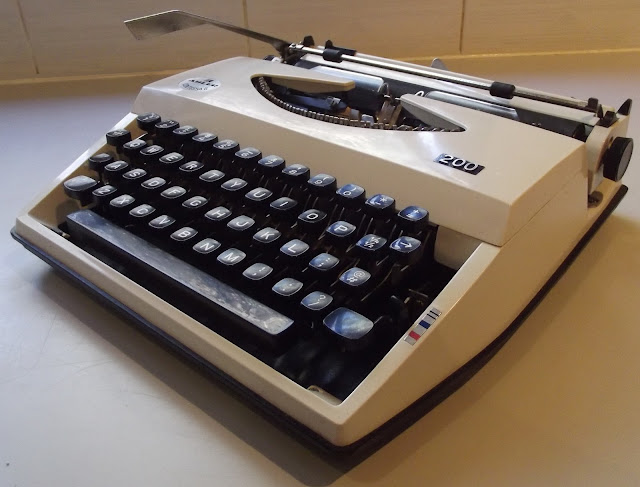 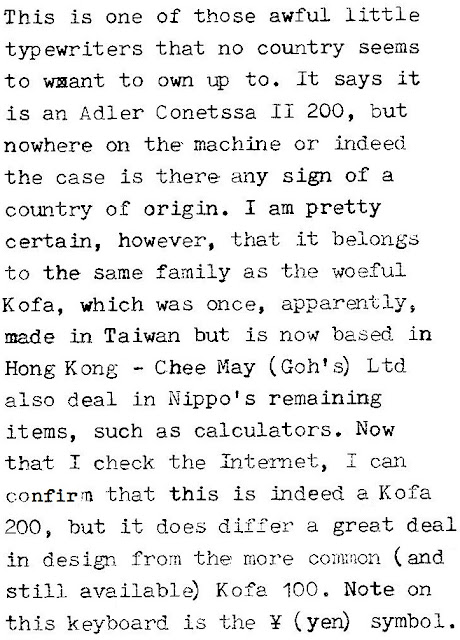 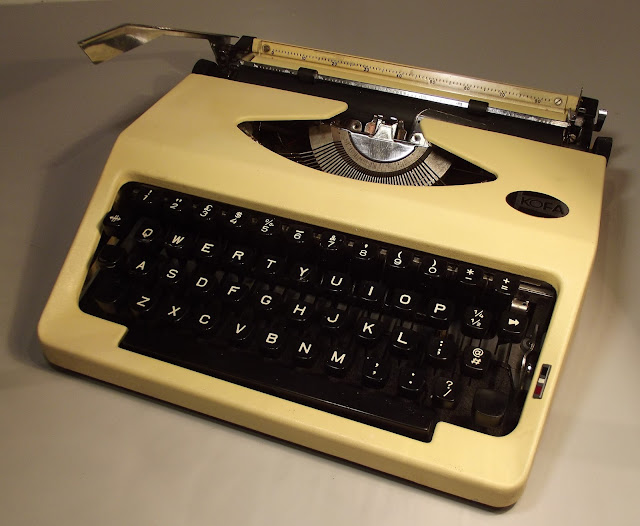 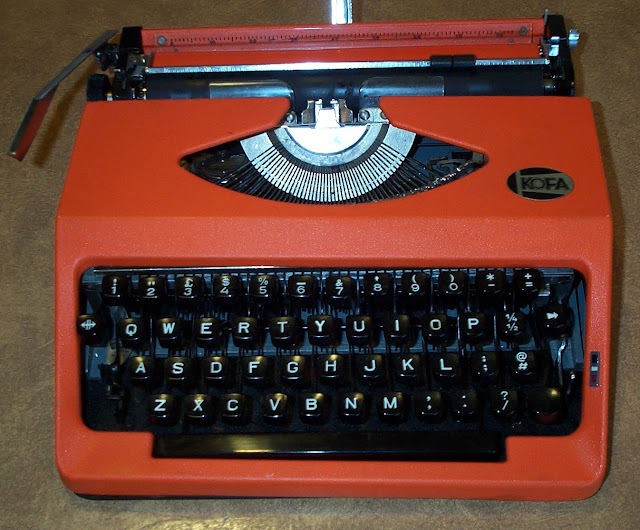 Above are my two Kofa 100s and below is the 200 as a Pinnock (rebranded by Currie Furniture Manufacturing, or CFM, in Melbourne) and a Kofa 200. The 100 has a metal mask, while the 200 is plastic. It is clear that for the 200, Kofa tried to copy, in a simpler, reduced form, the original Triumph-Adler Contessa mask design (notably the bottom plate without, of course, the "chrome" strip). Surprisingly, the designs of the internal workings of the Kofa 100 and 200 are also quite different. Will Davis described the Kofa 200 as a "dead ringer for the later [Triumph-Adler] modification of the old Tippa". 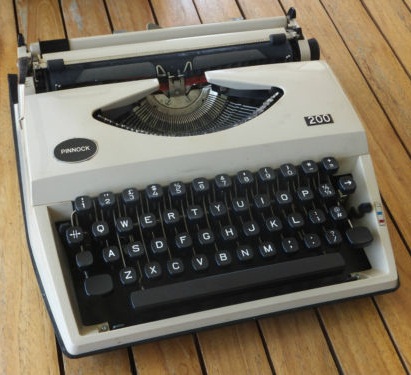 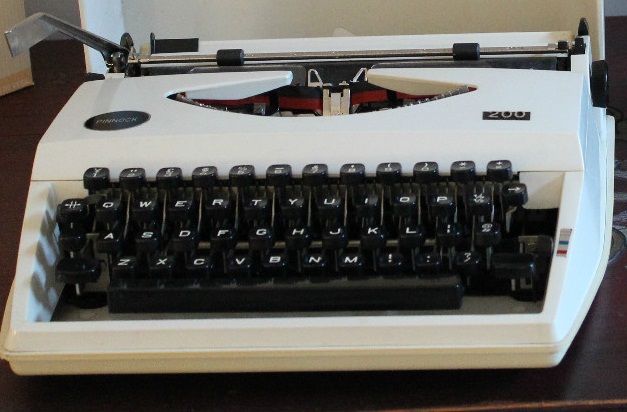 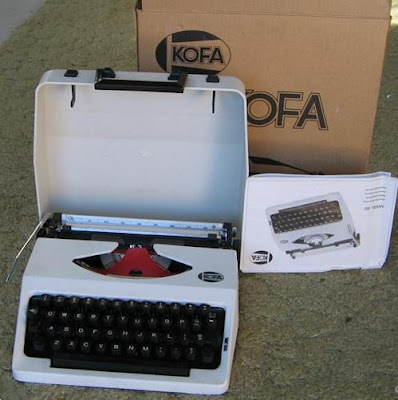 Now for the Lemair Deluxe 250TR: 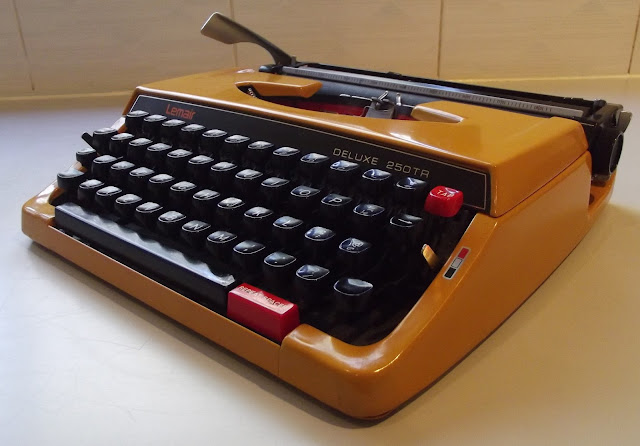 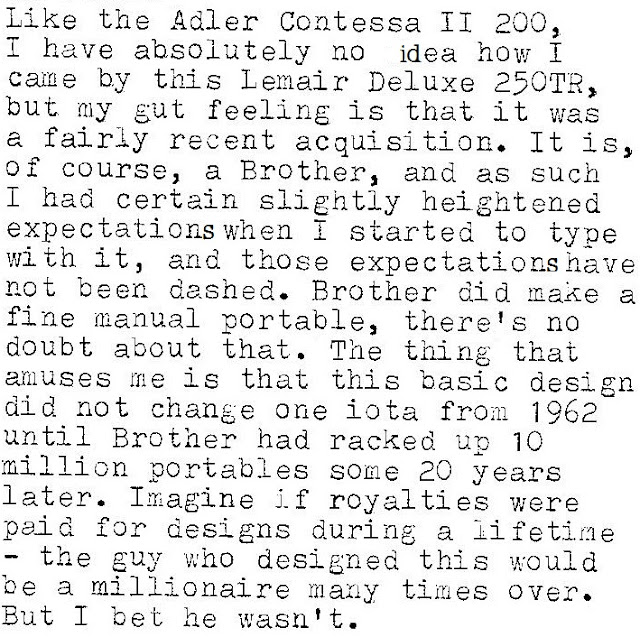 Finally the Lagomarsino LP44, included here as an excuse to publish the bit of information about this company's early days from Typewriter Topics in 1909: 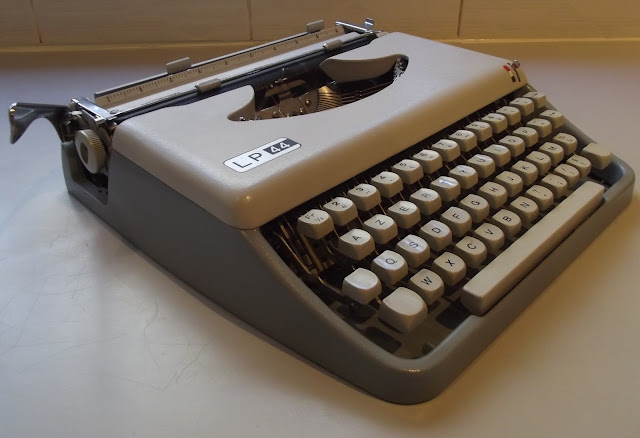 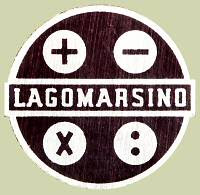 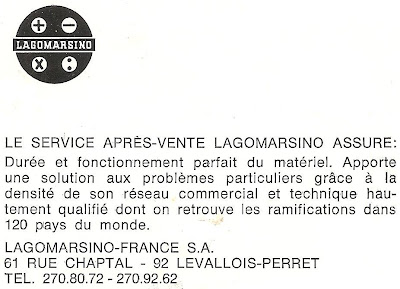 Below, Florian's Antares Compact, below it another example, from South Africa, and below it the same model as a Julietta. The obvious difference is the ribbon colour selector, which on the LP44 is on the front right of the ribbon spool cover while, as with most Antares portables, on the Compact it is behind the ribbon on the right: 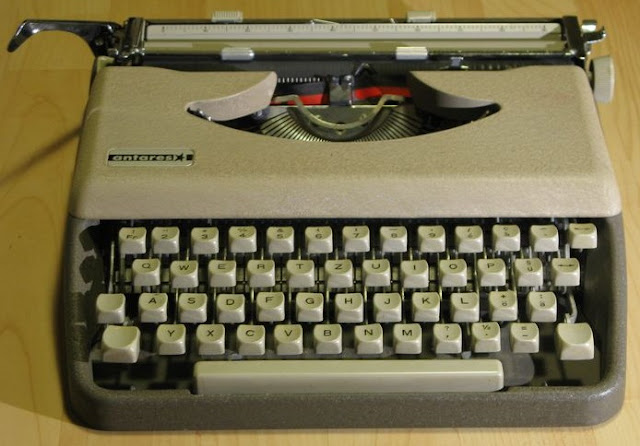 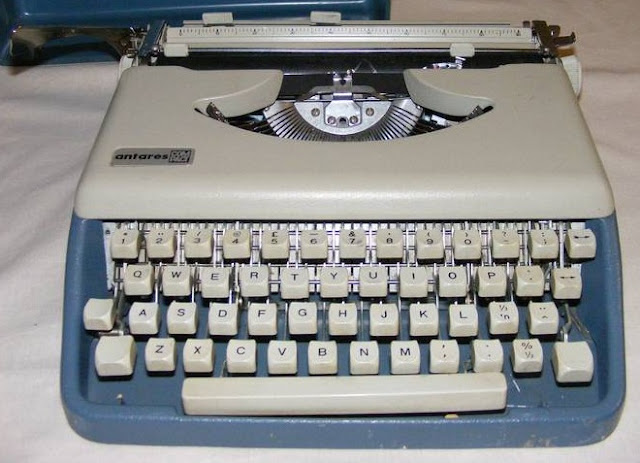 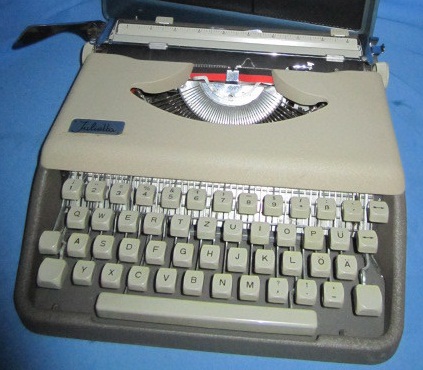 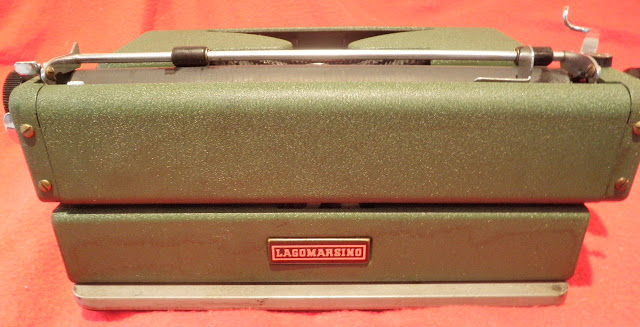 Posted by Robert Messenger at 13:16

So, I expect you are well known in the neighborhood (or the city) as an adopter of stray typewriters.

The Triumph-Adler Contessa De Luxe is a really good-looking machine. Too bad about the fragility of the plastic. If plastic didn't break and scratch so easily, I would have better feelings about it.

The only folks who leave typewriters on my doorstep are the mailman and the overnight delivery drivers. Hopefully someday i will reach that exalted level of notoriety that complete strangers will leave typewriters there to collect leaves and provide spider habitat. And an SM9 at that, and not just any old, but one from the early 1970's with the machined swirl on the paper support and guide, and the carriage lock handily on the keyboard. I hope you are impressed with my knowledge of the SM9 lineage. It was gained through the significant effort of multiple eBay purchases of these fine machines.

That SM9 produces brilliant type. I love it!

Shame about the ignorance of users. And I feel a bit sorry for the wedding party that used it on display.

Now I can see why your collection just keeps growing!

Hello, recently I bought a second-hand Kofa 100 in Hong Kong and is searching for new ribbons.

I found two kinds, one with three holes on the wheel and another with four. Which one should I get for my typewriter?

There is little to no information that I could find on typewriters in Hong Kong, thank you very much for your wonderful blog :D

Hello, are there differences between a Contessa and a Contessa de Luxe? All the best from Italy. Davide