Reattaching the Drawband to the Mainspring on a Portable Typewriter: The Layman's Rudimentary Way 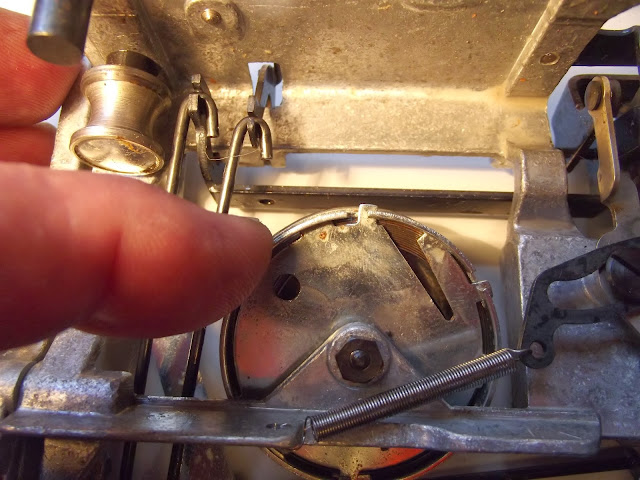 I have only just found a comment on a post from the distant past, from someone called Aidan, asking, “The carriage advance (? - not my question mark, but Aidan’s) string at the back of the typewriter is broken - do you know where I could find a photo as to how this attaches to the roller mechanism [presumably Aidan means the mainspring]?).
Aidan’s “broken carriage advance string” is, of course, the often troublesome old drawband. Sometimes metal, sometimes fabric, sometimes cat gut - but always a damned bother to fix! 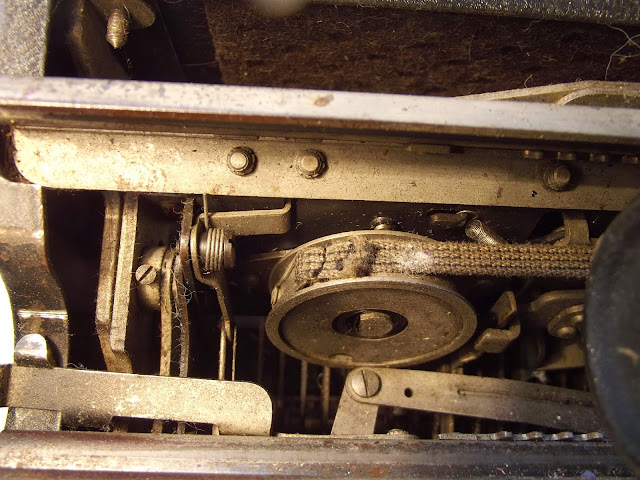 With four hands and a locking device, it's easy to re-attach the drawband to the mainspring on an old Underwood. It screws on. But "getting at" the mainspring to re-set it is a real test of endurance.
From considerable experience, I would estimate that at least 97.5 per cent of the problems with so-called “broken typewriters” are no more than worn and snapped drawbands. In very, very few cases has the mainspring broken.
Anyway, to aid Aidan, I have quickly rushed downstairs and snapped off some photographs, to guide him in the process by which a drawband can be reattached on a portable typewriter. My reply to his comment was all too simplistic and I thought I'd better do the right thing by him and try to produce some images.
The result of me holding a camera in one hand and a drawband in the other will offer only a very basic outline, but it may well suffice for those like Aidan who want to tackle this tedious yet "do-able" task. The general idea is here, anyway. I must add that I would far prefer to have two pairs of hands when undertaking this operation. 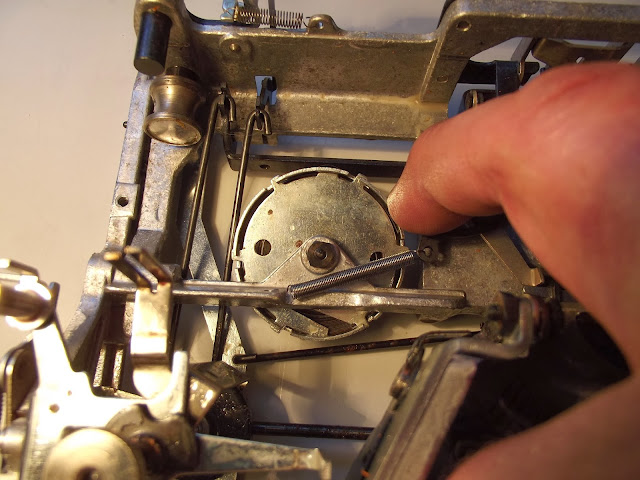 In Aidan’s case, the portable typewriter is a Torpedo, but in order to demonstrate my layman’s rudimentary (yet usually highly efficient) method of doing this job, I grabbed a stripped down Olivetti Lettera 22. This might be a bit unfair, as what I am showing here is easy to see, to get at and to do – more often than not, the mainsprings on portables are almost impossibly positioned and most difficult to get at and re-wind. But, dear beginner, try hard to avoid the temptation to take the mainspring off the mainframe. Fixing and reattaching a mainspring is one hellva lot harder than simply replacing a drawband.
If a drawband has snapped in half, which is often the case, it may be necessary to replace it altogether. Given you can’t wander down to the nearest typewriter shop and buy a replacement drawband any longer (boo-hoo) I use fishing line, and I find it generally works for me.
Always allow some leeway for the mainspring. Reattaching a broken drawband, using what remains of the original drawband, can lead to problems if the length is not sufficient to ensure the mainspring can properly pull back a fully extended carriage.
OK, my method starts from right to left, which may not be technically the right way to go about it, but I find it easier, especially when working without assistance (as we most often must do). 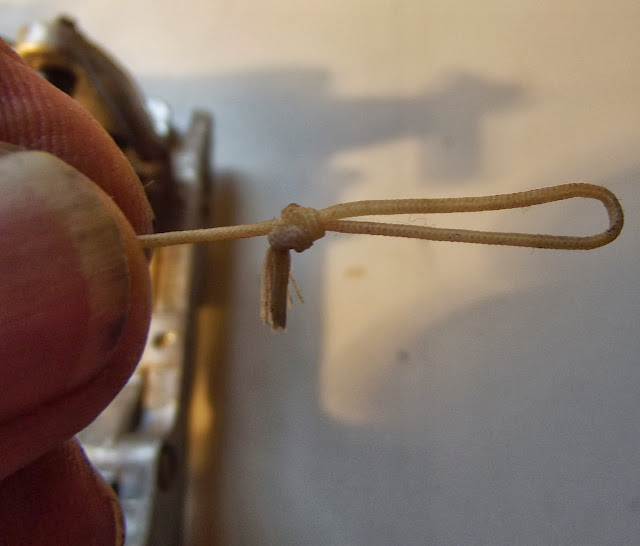 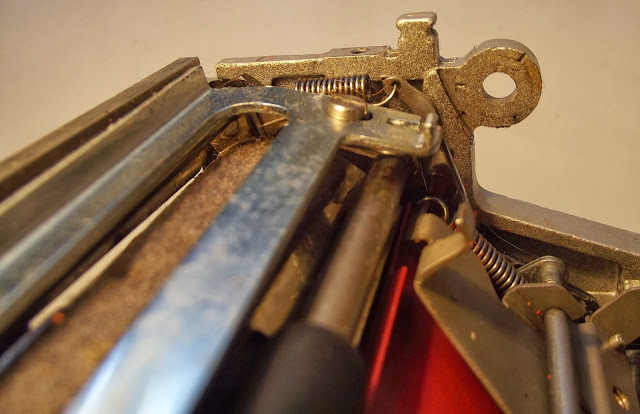 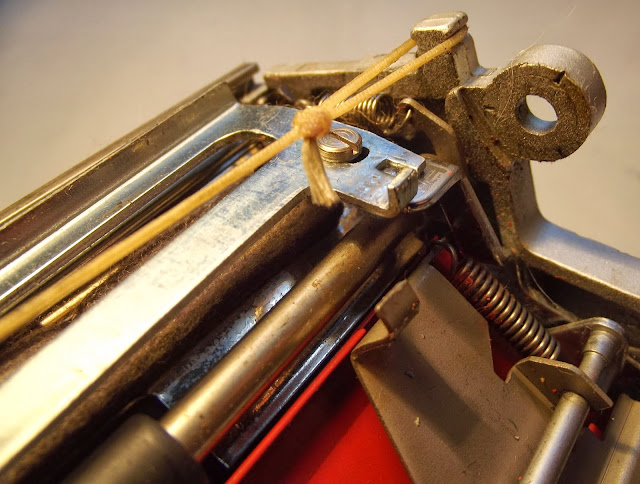 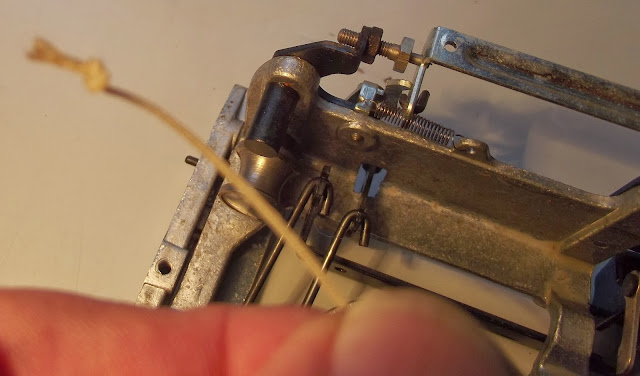 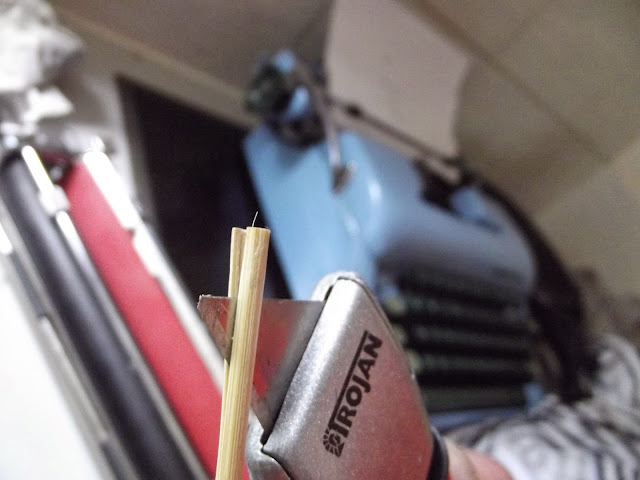 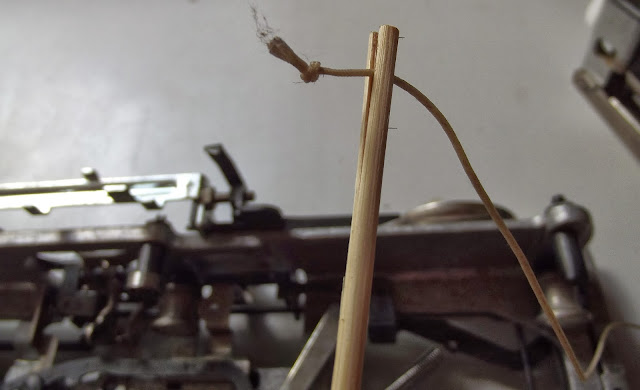 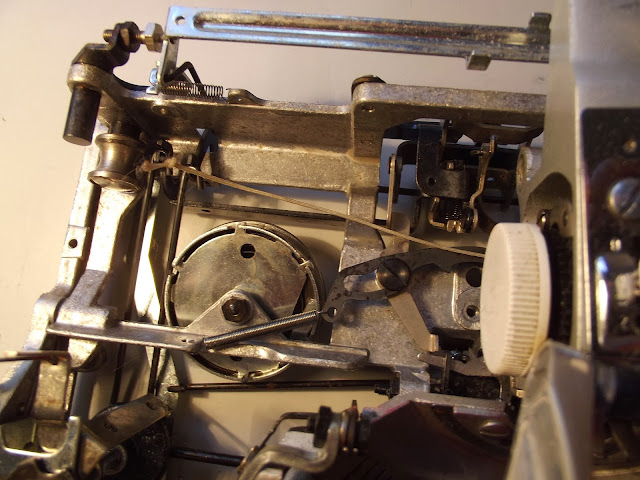 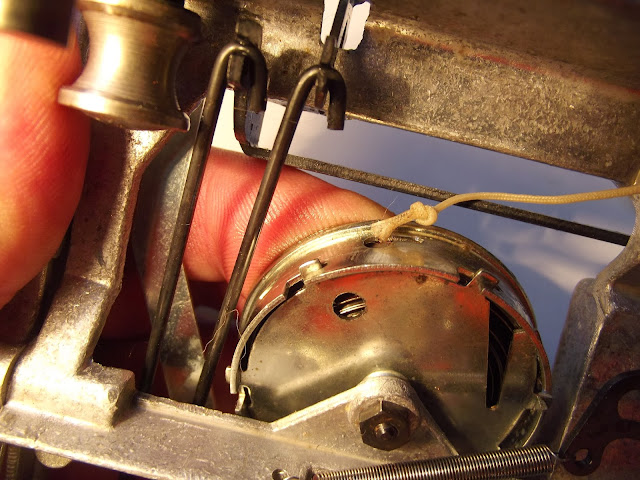 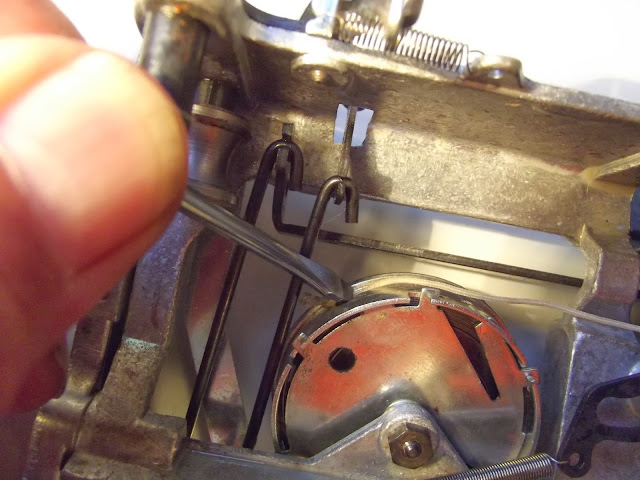 * If I can find another set of hands, or two, I might video this process.

Hey, that skewer is a clever tool. I've taken a length of a clotheshanger and bent a hook on the end to do the job, but the string may have to be tied onto the hook, which is a pain.

Thanks Richard. Yes, I too have tried the clotheshanger wire trick, and have taped the drawband on to the end, but it often comes unstuck under the carriage. It's a blow when the wire emerges sans drawband!!!

I toolliked the skewer trick.
That was avery nice lucid explanation Robert, one which any beginner could follow. You are correct in saying the Olivetti is one of the easiest to demonstrate the method but once you have done one the idea will stick as the principle is the same. i just hope no one asked you to fit a drawband on a Barlock 22!

Thank you John, that's much appreciated.

That's really useful, thanks. I have tried both ways but find attaching the string to the motor first is a lot easier, if only because you can wind up the spring in advance. Then, using the hooked end of an old bike spoke, I pull the string through and attach it to the carriage lug. Pulling, rather than pushing, the string through seems more natural somehow and pre-threading the spoke under the carriage means I can avoid any obstacles in the first place. I wonder if I find it easier this way because I'm left handed? What I always find the most difficult is putting the right sized stopper knot on the spring-end of the string. Too small and it pops out, to big and it won't shove in. Being able to do this bit without the spring under tension is probably why I favour it. Well done on getting those photos done one-handed!

By the way, not every typewriter requires you to deal with a spring under tension while doing this job. Sometimes there's an easy way to wind up the spring after attaching the cord, by turning a screw or pushing the teeth of a ratchet (as on noiseless portables). Sometimes it can be done by turning the spring drum while slipping the cord off the perimeter of the drum during each turn, then slipping it back on. (A bit easier done than described!)

I like that skewer idea. I have never tried anything but a hook yet the skewer s something everyone should be able to get and use.

I have tried the anchor point to drum method and working from the drum to the anchor and find generally when I do not need to tie a draw string through a hole it works the easiest.

Thank you for the detailed post. I am sure many of us will refer to it as we repair our typewriters.

If I need to tie a knot that goes in a hole like my Montana or Noisless #7 I need to work from the drum to the anchor point. I use a very small machinist's clamp to hold the drum when I pull tension on it while I anchor the string.

I'm hoping someone sees this and can help. I have a Kmart 1960s deluxe 100 that appears to be in mint condition. However when typing the carriage does not advance. It releases and with very slight pressure will advance, but not on it's own.

I was given a Brother 760TR typewriter and the string which advances the carriage seems to have come loose. I'm looking for a repairer in Penrith (ish) NSW who is willing to spare an hour to teach me basic maintenance and fix it (I can pay for their time) or someone who can give me a pic/video to help me. I'm really reluctant to remove anything but the outer casing without knowing what I'm doing. Many thanks in advance to anyone who can help. Self Sufficiency

Any advice on repairing/replacing the mainspring/clockwork motor?

You can see my problem here: http://wordsfromouterspace.blogspot.ca/2015/01/a-cry-for-help.html

Hi thanks for the help, I am repairing an old Remington portable and when I re-attach the drawband to the mainspring and try to advance the carriage, the mainspring won't turn to pull it back. I tried re-setting the mainspring and everything seemed to work on it.but I was just wondering if any of you would have an input.

It seems possible the mainspring has come unattached inside its drum. Before attaching the drawband, try turning the spring both ways, the get an idea of what life is still in it. You will soon see whether you have reset it the right way, and whether there is enough "zing" still in it to pull the carriage. With the drawband, also allow for some traction, so that the where the band attaches is down below the level of the escapement rack.

I am eternally grateful to you for this information. We had a typewriter with a broken drawband that appeared hopeless, but I found this post and was able to successfully re-attach the drawband.

I documented my experience online in the hopes it will help someone else with a similar problem.

I'm having a bit of trouble fixing my 1947 Olivetti M40/3, any help you can provide is greatly appreciated, thank you!

Here's the reddit link that should explain what's going on http://www.reddit.com/r/typewriters/comments/2zqpau/olivetti_m40_help_update/

Thank you so much. Fixed my typewriter with the help of this!

Thank you, now I know what's wrong with my typewriter! My mainspring doesn't seem to wind - it is an Olympia SM2 - is there a secret mechanism or could my mainspring be broken? It seems there is a distinct lack of zing from either direction...

Thank you Robert for this post, and thank you Richard for the tip on the ratchet on Noiseless portables. When the typewriter I was working on had a weak carriage advance, of course the first thing I did was to remove the motor. Sproing and tangle resulted. Many attempts to wind the cord back on to the tightly wound up spring, and slip it over the pulley failed. Finally I wound just a light tension on the spring which made it possible to get the cord around the spool and the pulley and held there while I turned the typer right side up and with the carriage full left patiently pushed the ratchet wheel a few notches at a time. Bingo - another functioning typewriter thanks to the wonders of the Typosphere!