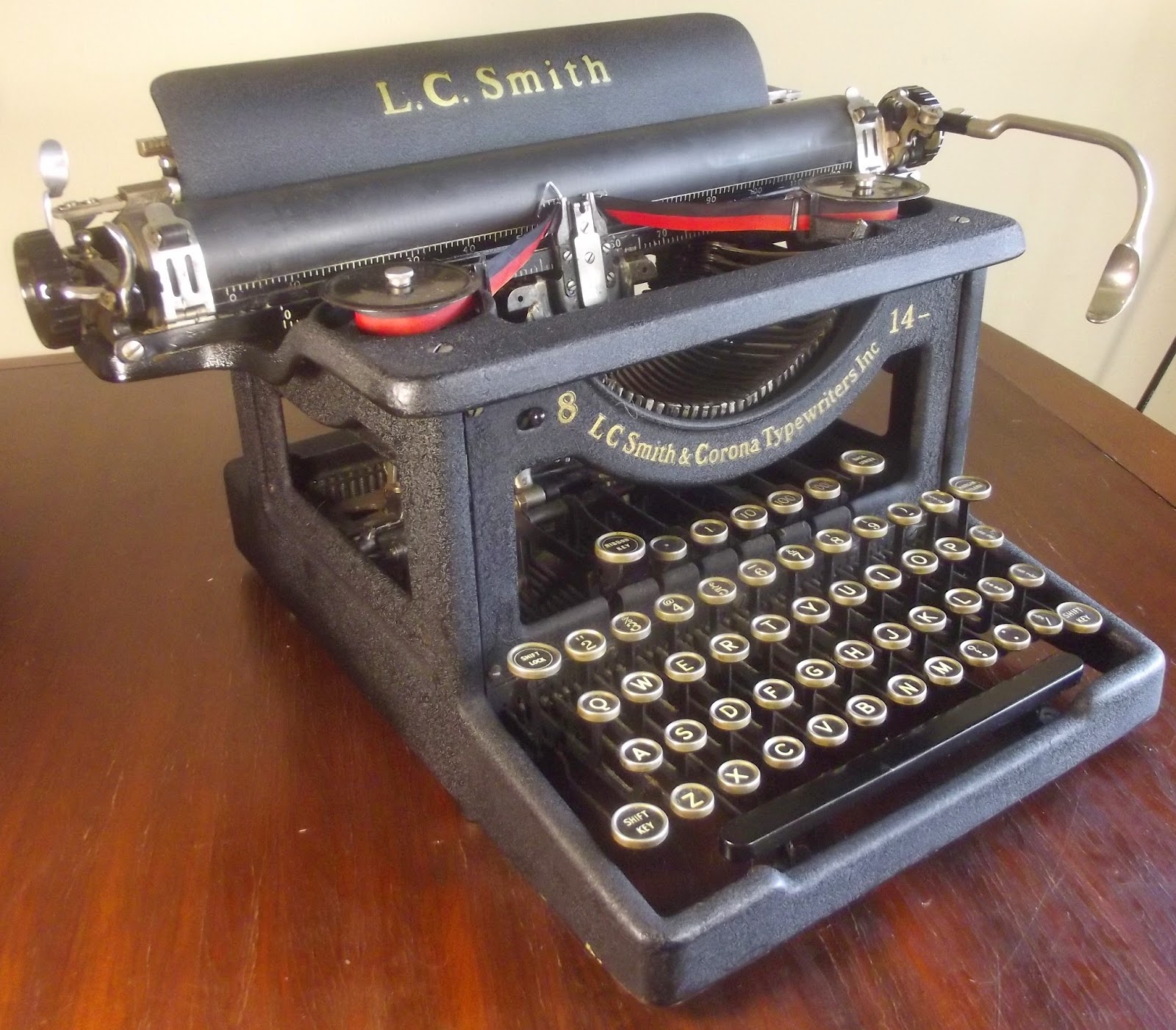 One thing I should state from the outset: if this is, as I very much suspect it is, a pre-1936 typewriter rebuilt in Australia in 1947, the people who rebuilt it did a damned fine job of it. 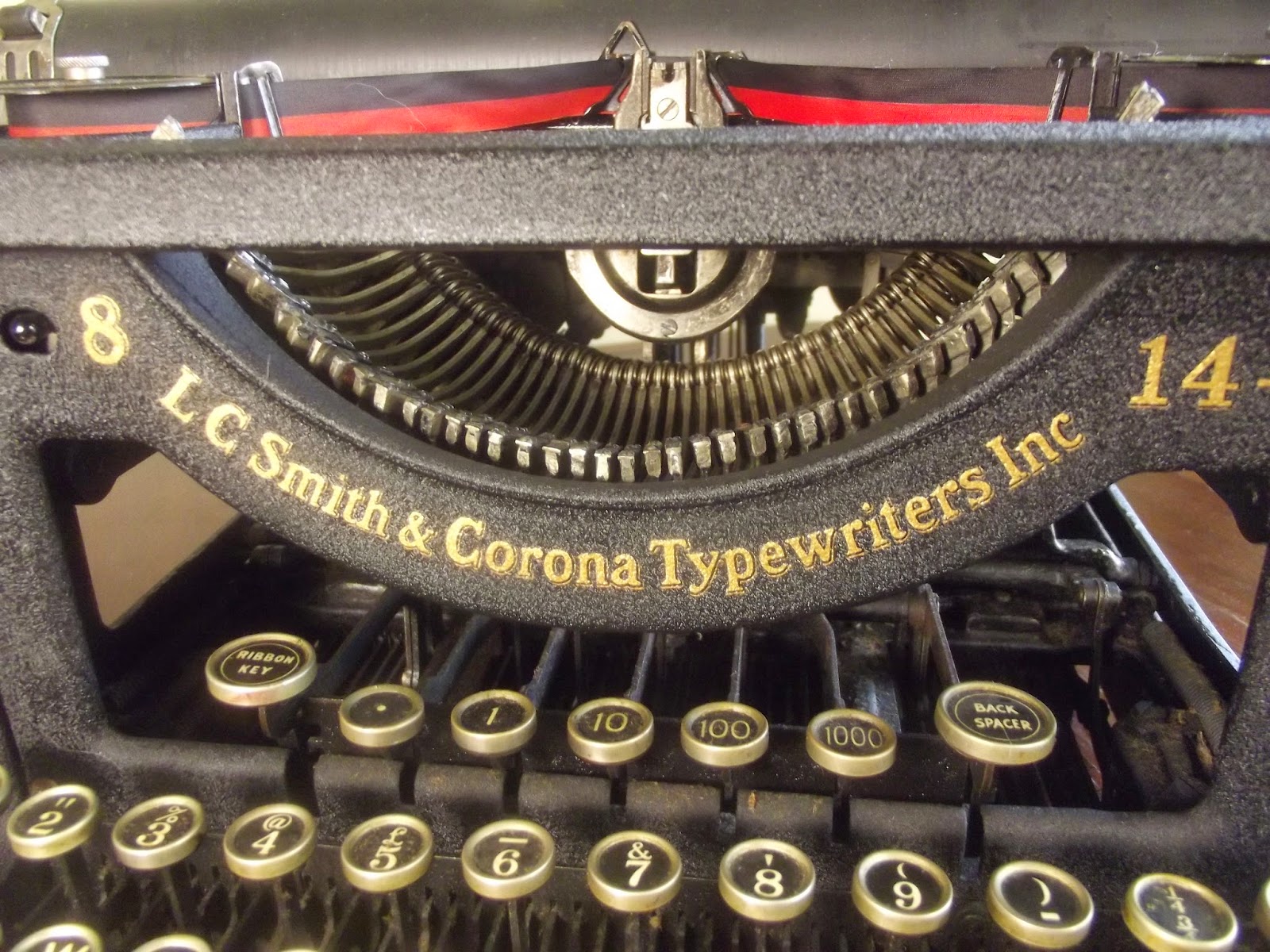 Back on May 30, 2011, when I posted on the remarkable L.C.Smith & Bros No 1 No 1 (see item above), Richard Polt commented that the "L.C.Smith is a great typewriter". That was sufficient endorsement for me to store away a mental 'Post-it': "One day, must type on L.C.Smith - in good condition". I must confess, however, that in the intervening four years the note got lost in the anterior cingulate. What's more, in the circumstances, the chances of me ever typing on an L.C.Smith in good condition had greatly diminished. So I never really gave the idea a second thought. That is, until last week, when embroidery expert, violinist, librarian and national orienteering champion Marjorie Alison Gilby (née James; above left, 1974; above right 2013), coming up to 85, gave me her incredibly well-preserved and intriguing Model 8. 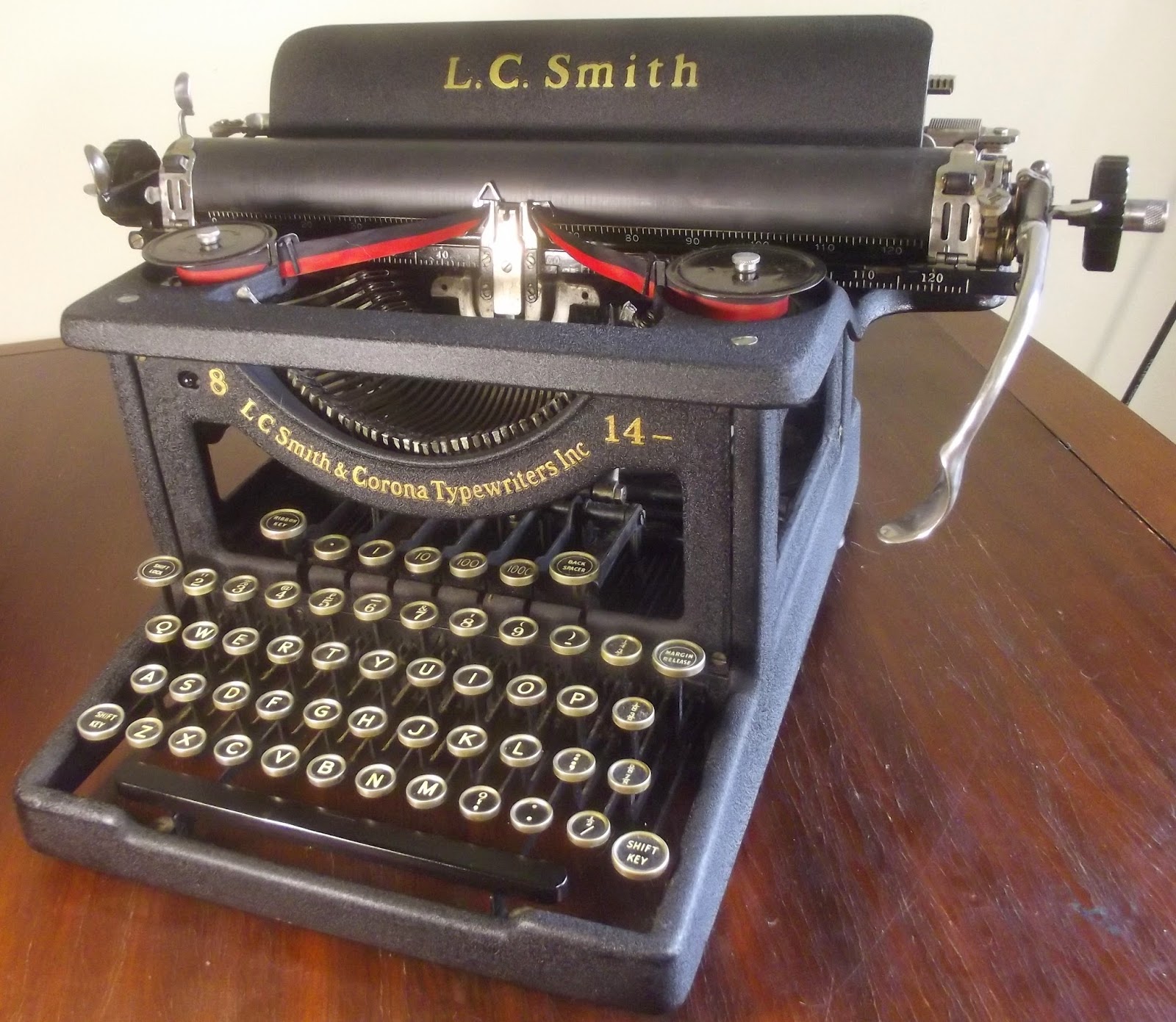 Intriguing for a few reasons, but largely because I cannot accurately date this machine. Yes, I know I wrote in my typecast with my L.C.Smith that I had found its serial number, but I was mistaken; instead, I had just assumed, because it was a Model 8 sold second-hand in 1947, that it was made in the 1920s. I still think that's the case, but cannot be certain. One thing we can be certain about: it was obviously made after the Smith brothers emerged with Corona in 1926. Or maybe not ...
I realise many L.C.Smith owners have difficulty finding the serial numbers on their typewriters, and indeed it was for this very reason that I posted the chart from Wilf Beeching's Century of the Typewriter which points to the location of serial numbers on various machines, including two versions of the L.C.Smith.
A Charleston, South Carolina, reader called John Guthrie had prompted the post by emailing me, "The serial number has eluded me. I have flipped it on all sides, slid the platen to both the extreme right and left and snooped around with a bright flashlight - all to no avail." John's was just such a model - a No 8 with a 14-inch carriage. Beeching's chart pointed him in the right direction and John responded, "Sure enough, I found it. T’were it a snake, it’ve bit me." The number he found was 875707, which, using Ted Munk's Typewriter Database, enabled John to date his machine to early 1929. "Now, Robert," added John, "please post the owner’s manual. We can find neither the copy-paste nor the delete button." 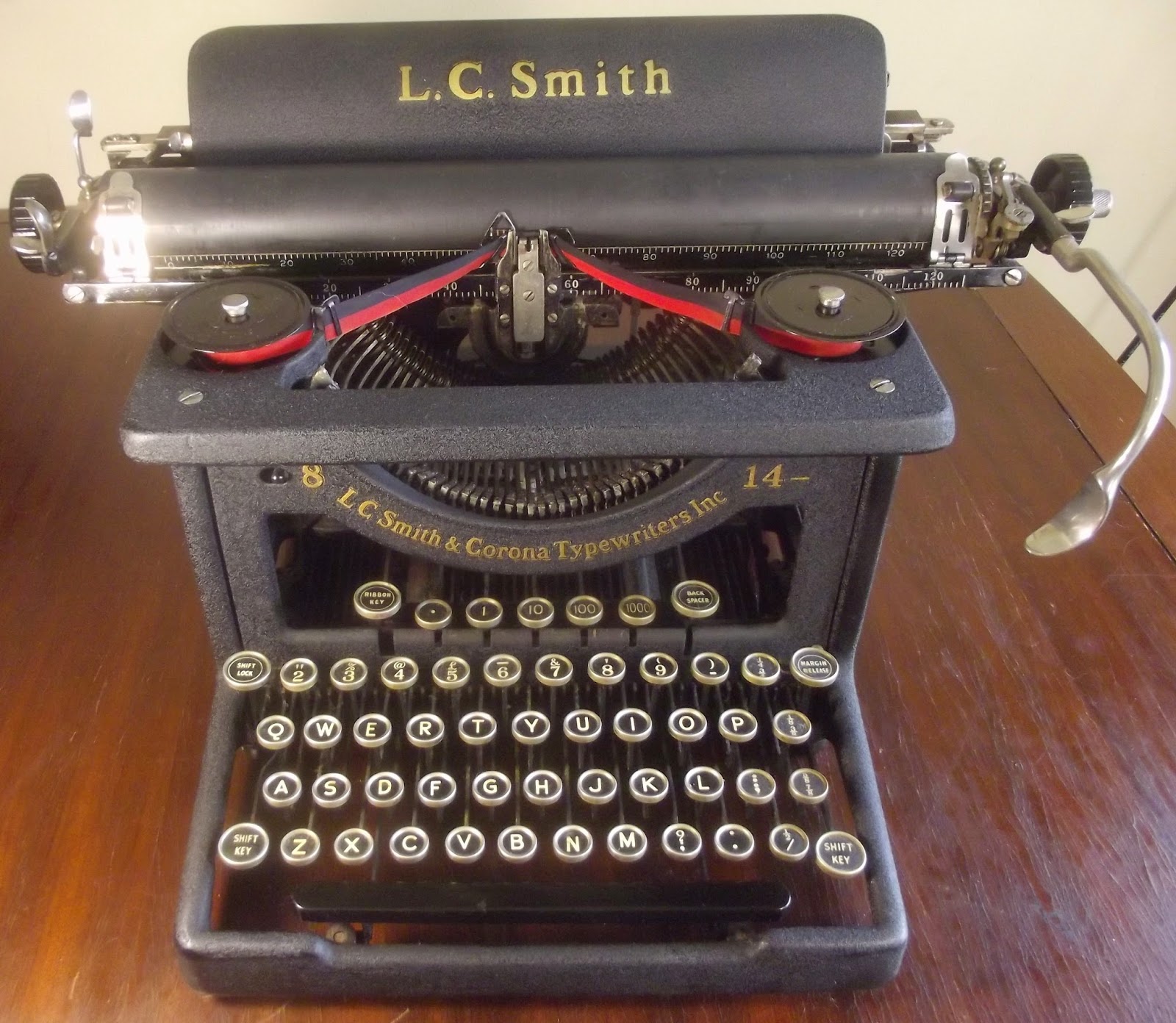 Well, like John, I have looked for a serial number in every nook and cranny of my L.C.Smith, but unlike John I have had no success. The Model 8 was called the "Silent Smith" and this one is certainly keeping its secrets. The more I looked, the more convinced I became that this machine has, at some stage of its life, undergone a very thorough and professional refurbishment, including the replacement of decals (perhaps the one on the front which includes the name Corona was all that was available at the time the typewriter was repainted and rebuilt). And that in the process, the serial number was painted over with a good, thick coat of a new "crinkle" finish. One of the many things that convinced me this had occurred is that there is ample evidence on quite a few screws of burring, which indicates it has been completely taken apart in its past. 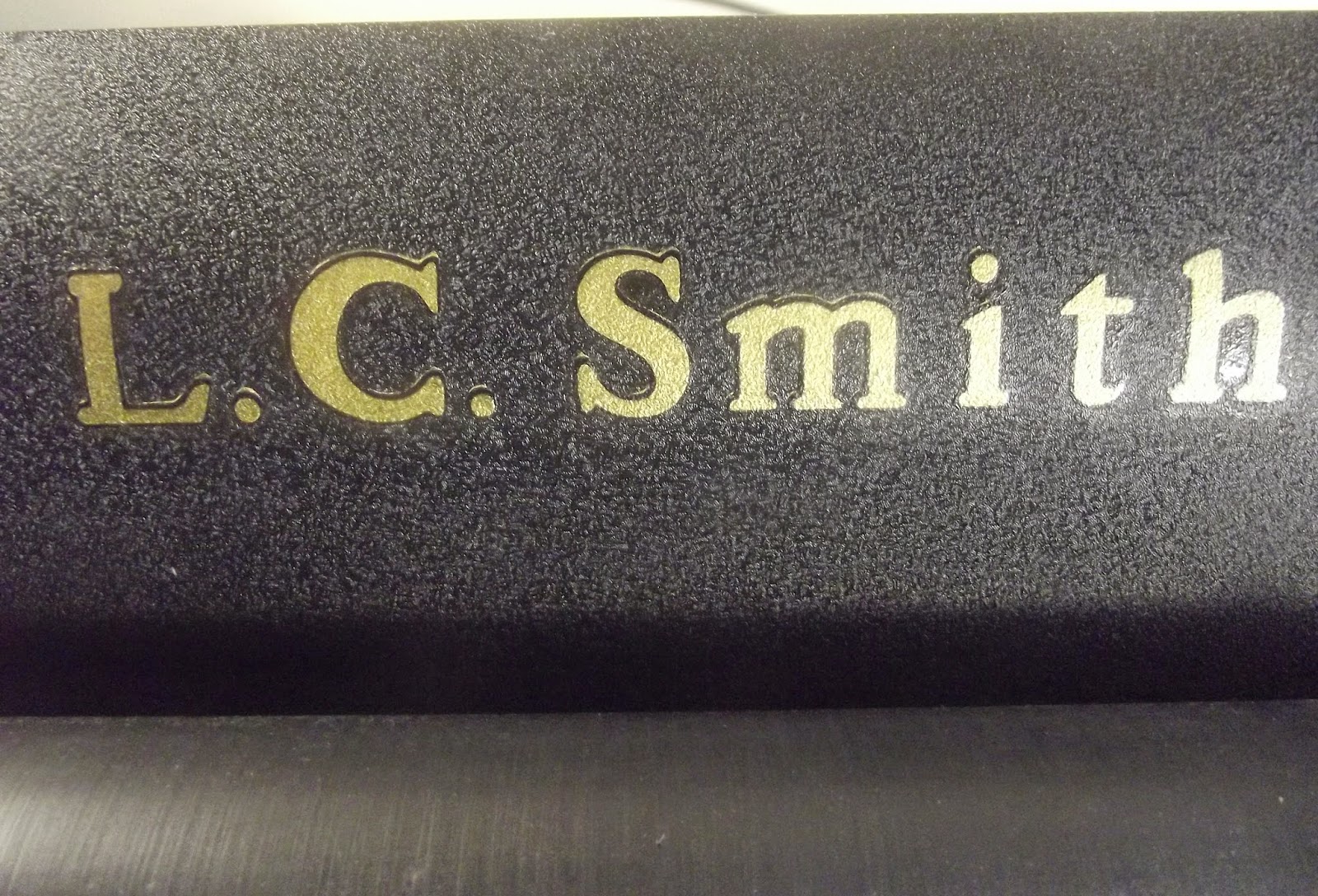 Now, what we do know about my L.C.Smith is that it was bought for Marjorie by her doting father in 1947, when Marjorie was 16 and keen to learn to type on a "proper typewriter". "He spoiled me," Marjorie recalled last week. It came with a Remington touch typing keyboard chart (below), and I have even found a listing for it in the classified advertising columns of The Sydney Morning Herald in August 1947: 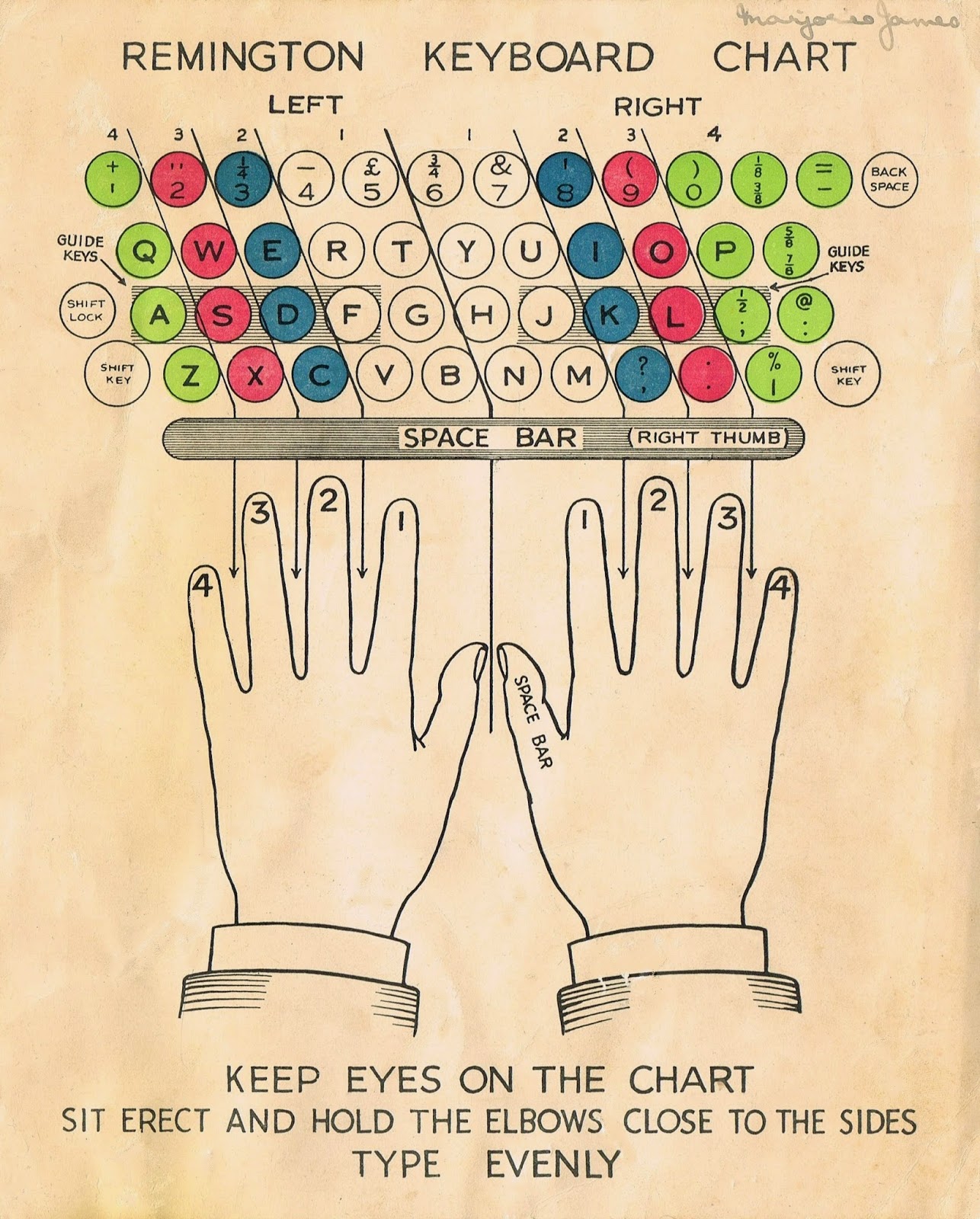 Even 10 years earlier, reconditioned L.C.Smith 8s were being sold by Stotts in Australia for 10 guineas. It's important to bear in mind here that from May 22, 1936, American-made typewriters could not be imported into Australia, so no new L.C.Smiths or US-made Coronas were sold here beyond that time - though some Canadian-assembled typewriters such as Underwoods, relabelled machines (as Australian brands) and British-made Remingtons and SCMs began to appear in the mid to late 1950s. From 1936 to the early 1950s, all American standards sold in this country were reconditioned - which adds to my theory that my L.C.Smith was completely refurbished during that period. 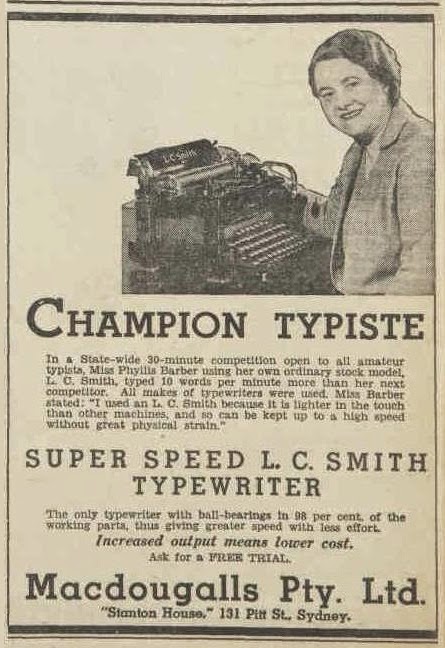 Australian Women's Weekly, November 27, 1937
I might not have been able to find a serial number on my L.C.Smith, but I did find this (it's pretty hard to miss, given its size). 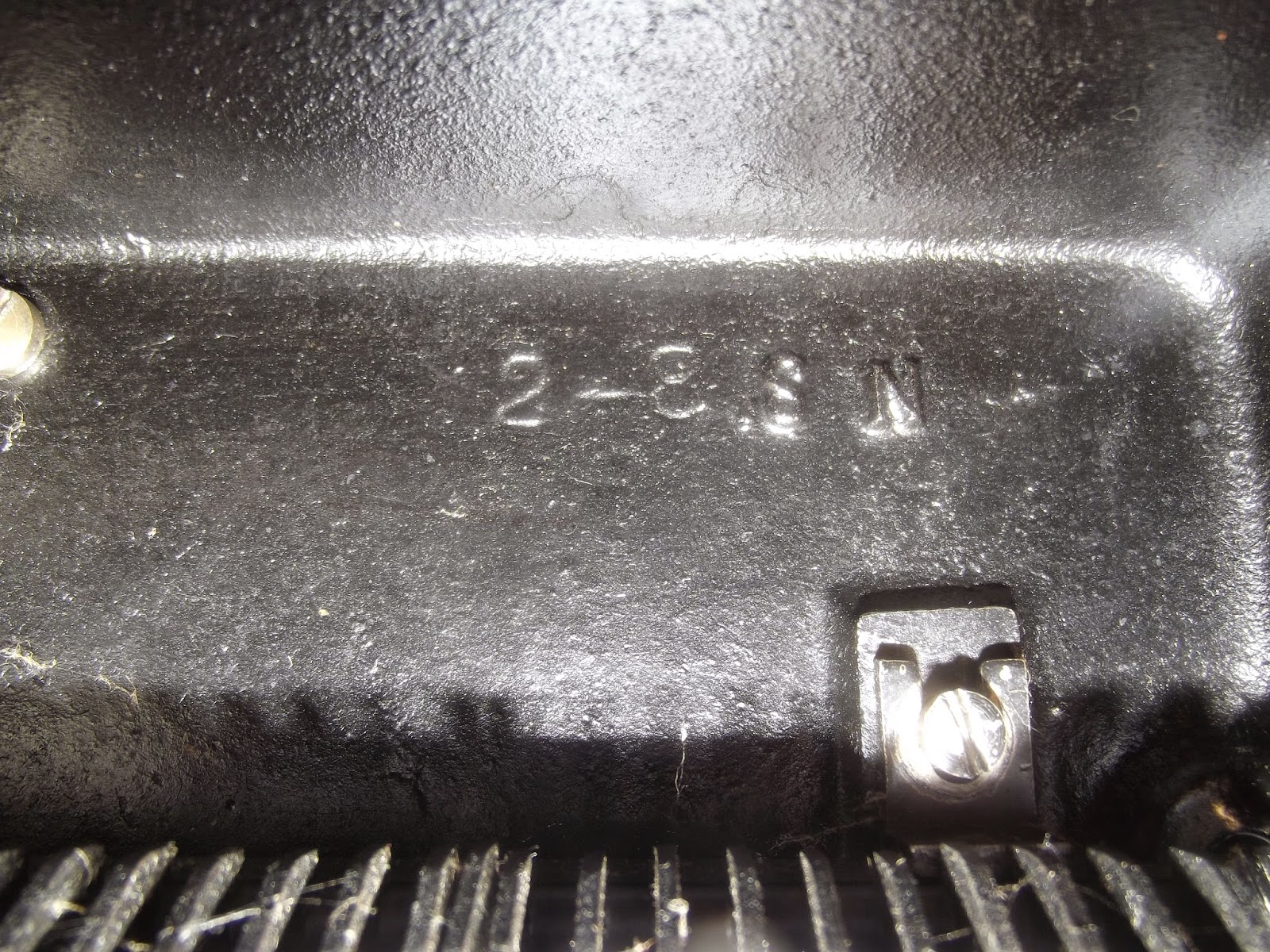 Now, just as I am aware some L.C.Smith owners have had a job finding serial numbers, I'm also mindful that some others have been misled by the larger numbers and letters underneath the typewriter. Not sure what the "2" stands for, but the "8" clearly indicates the model number.

This photo of L.C.Smith No 1, No 1 was taken in New York City in 1953. It wasn't in Wisconsin.
When I posted on the L.C.Smith No 1 No 1, a reader in Wisconsin asked about her machine, stamped 1-1 (naturally assuming it was very rare). An Italian blogger said his L.C.Smith No 1 "had only [the one] mark, in very big letters, under the machine ... 1-3 X". And Antonio wasn't fooled into thinking that this indicated his machine was just the third off the production line! 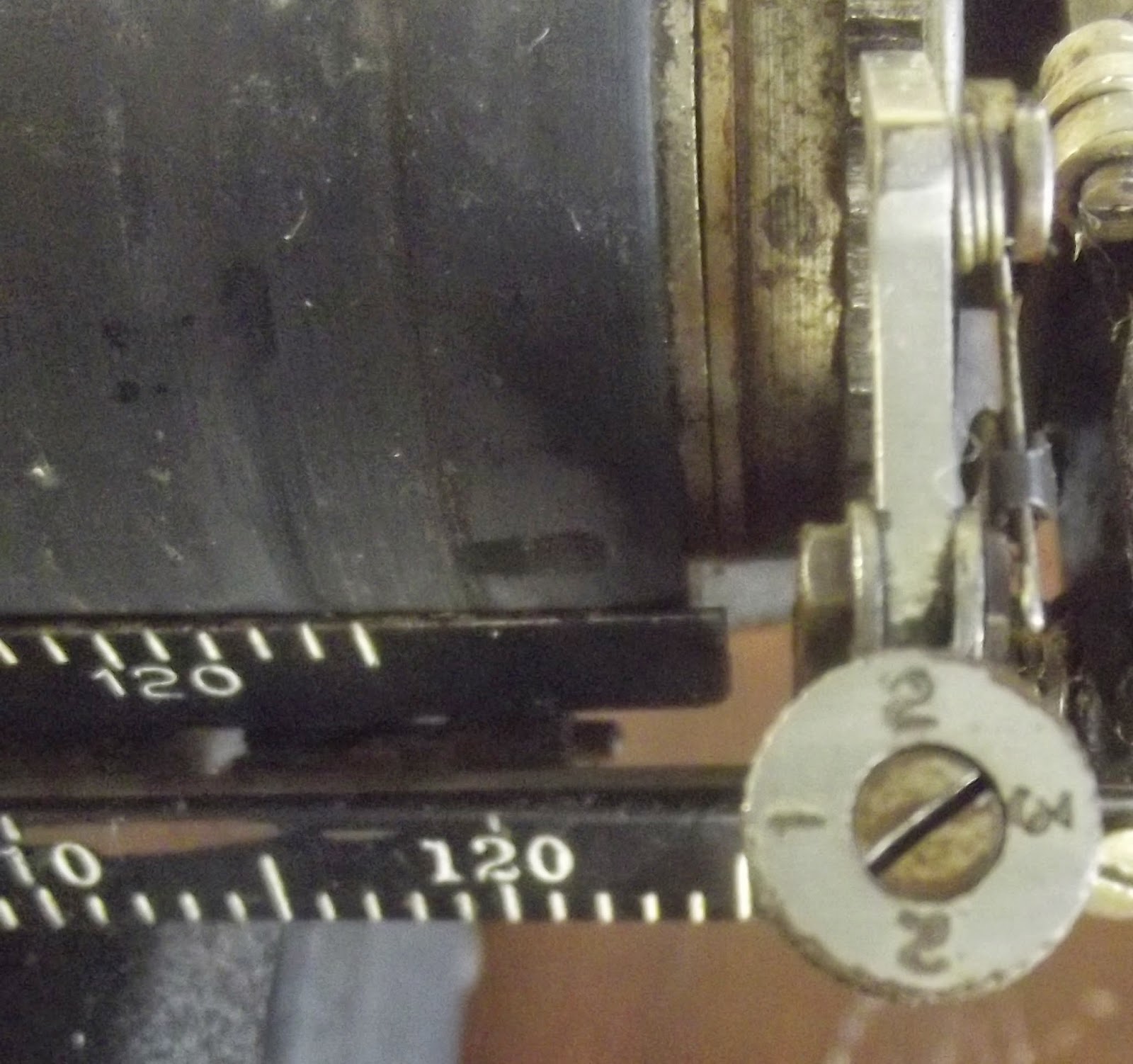 I particularly like the "little" things about the L.C.Smith, features that are so simple and yet so efficient - like the line spacing dial, the ribbon colour selector key (both much better than switches) and the ribbon direction switch. No fuss, no bother. 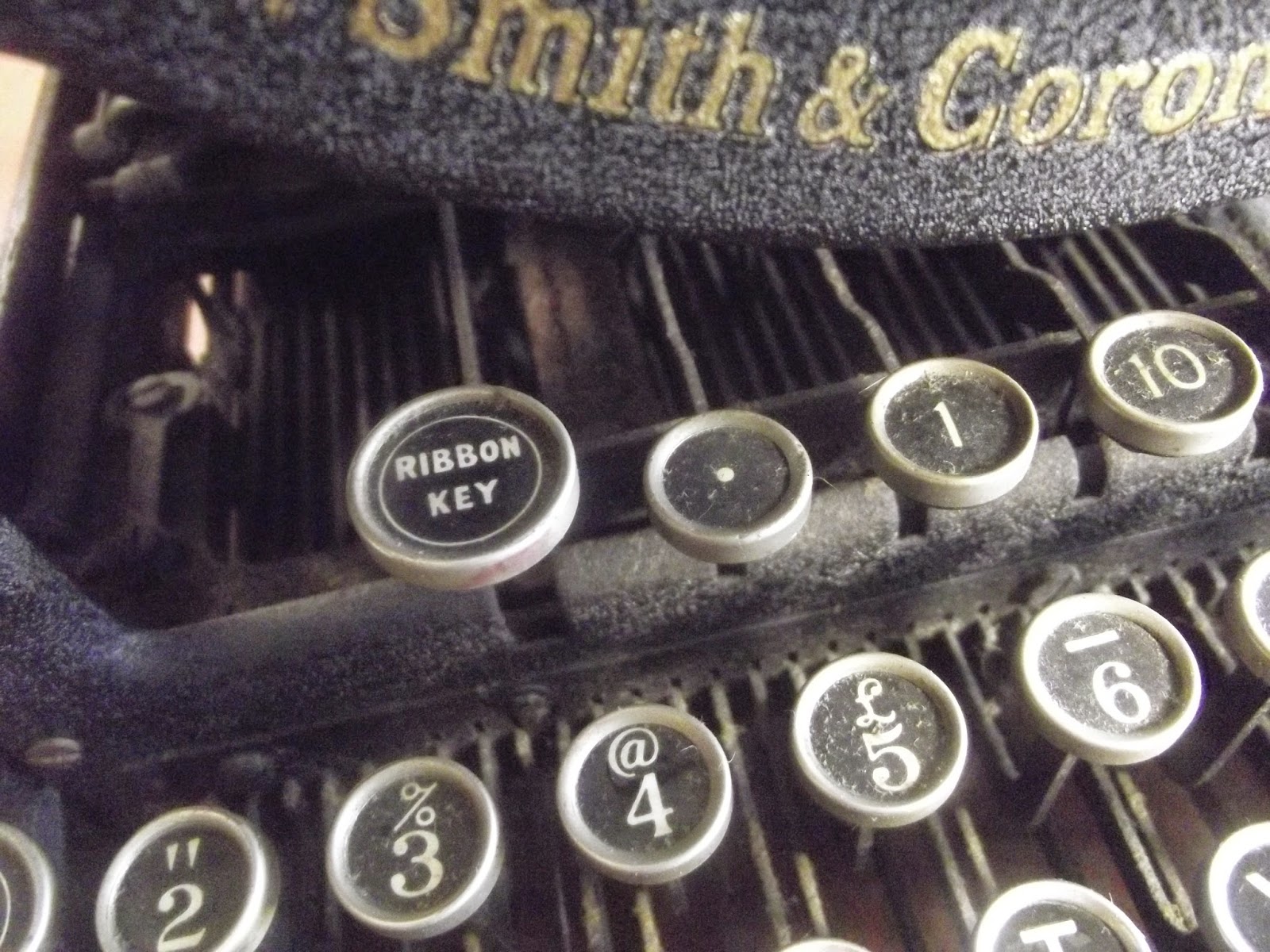 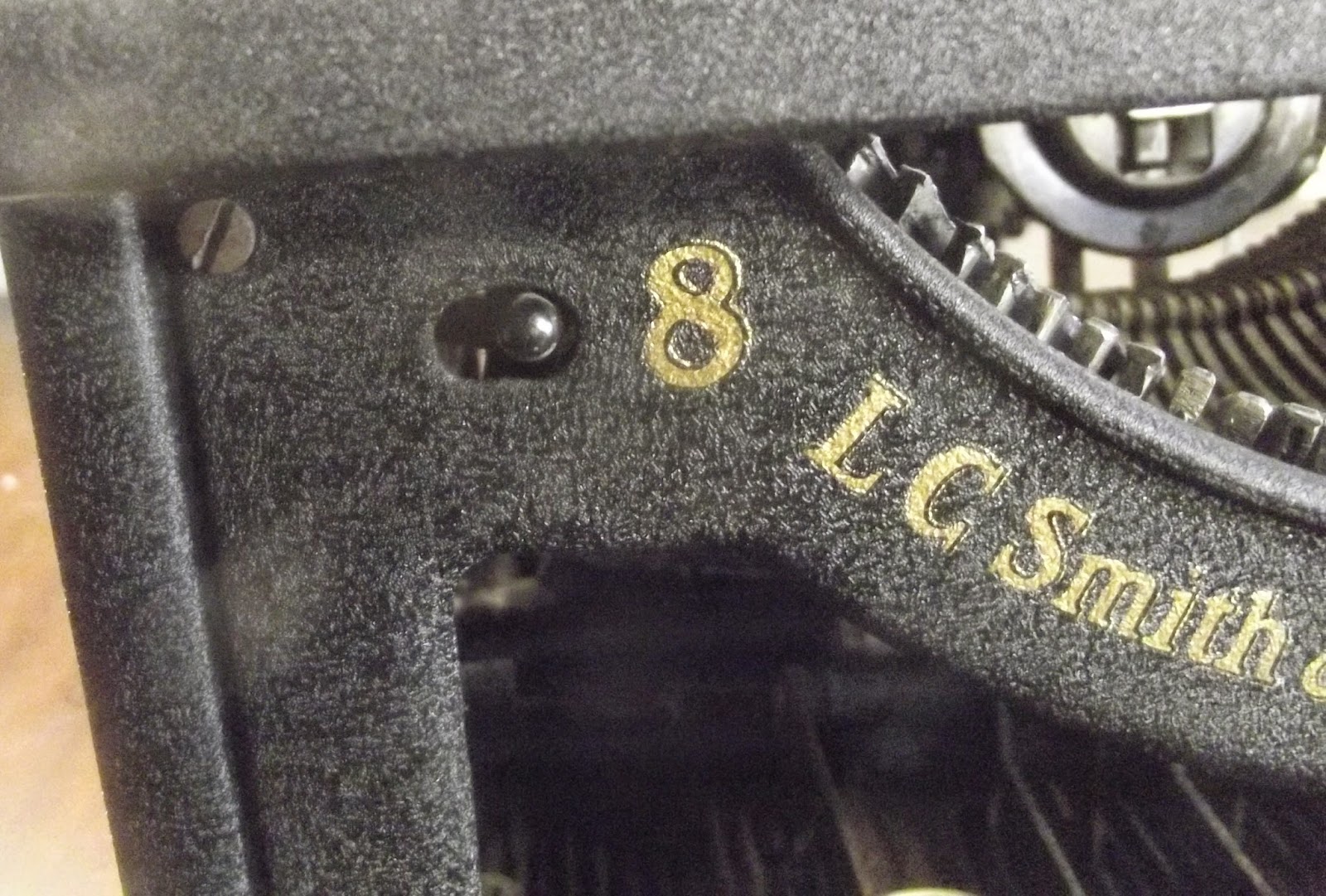 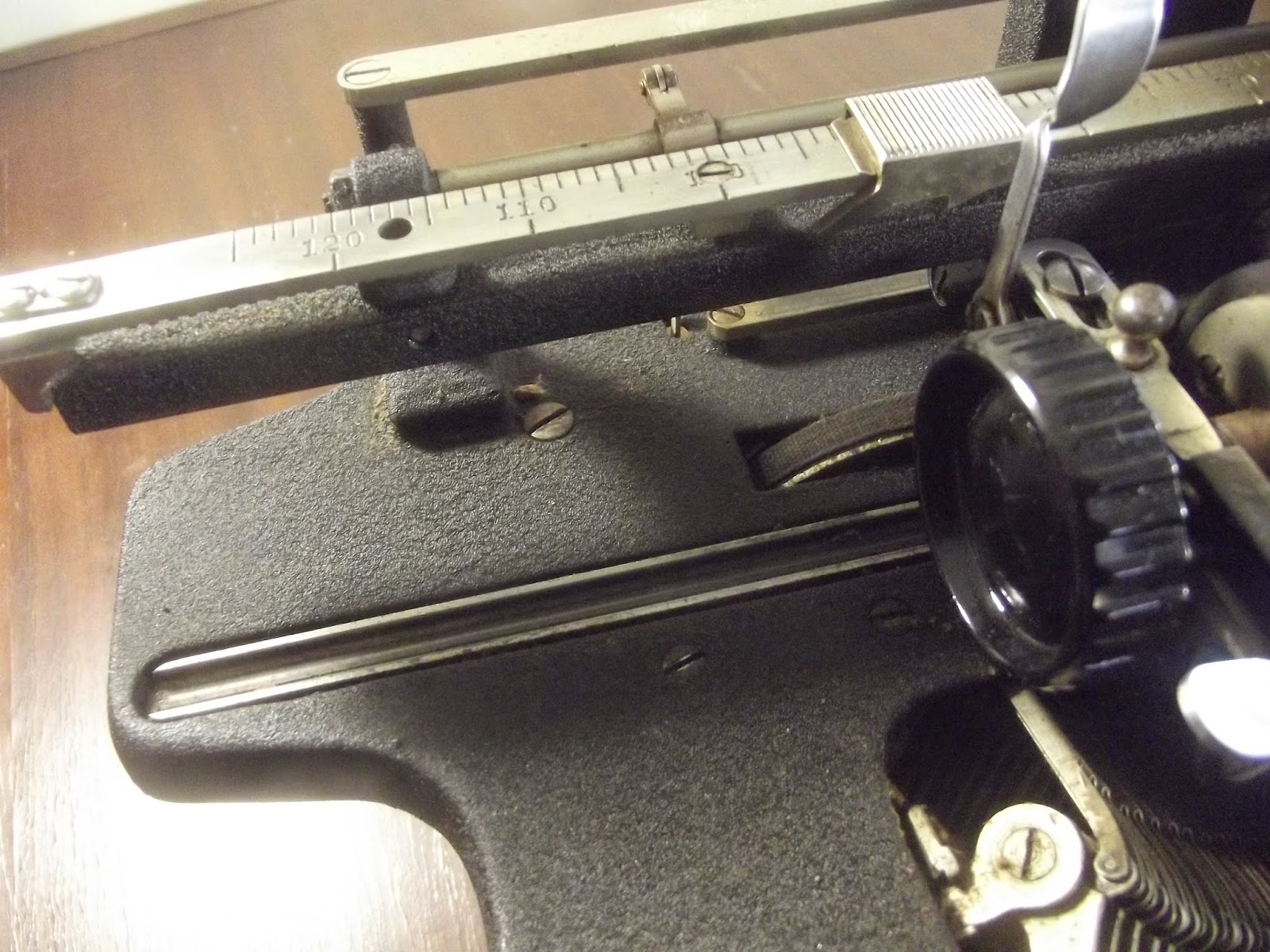 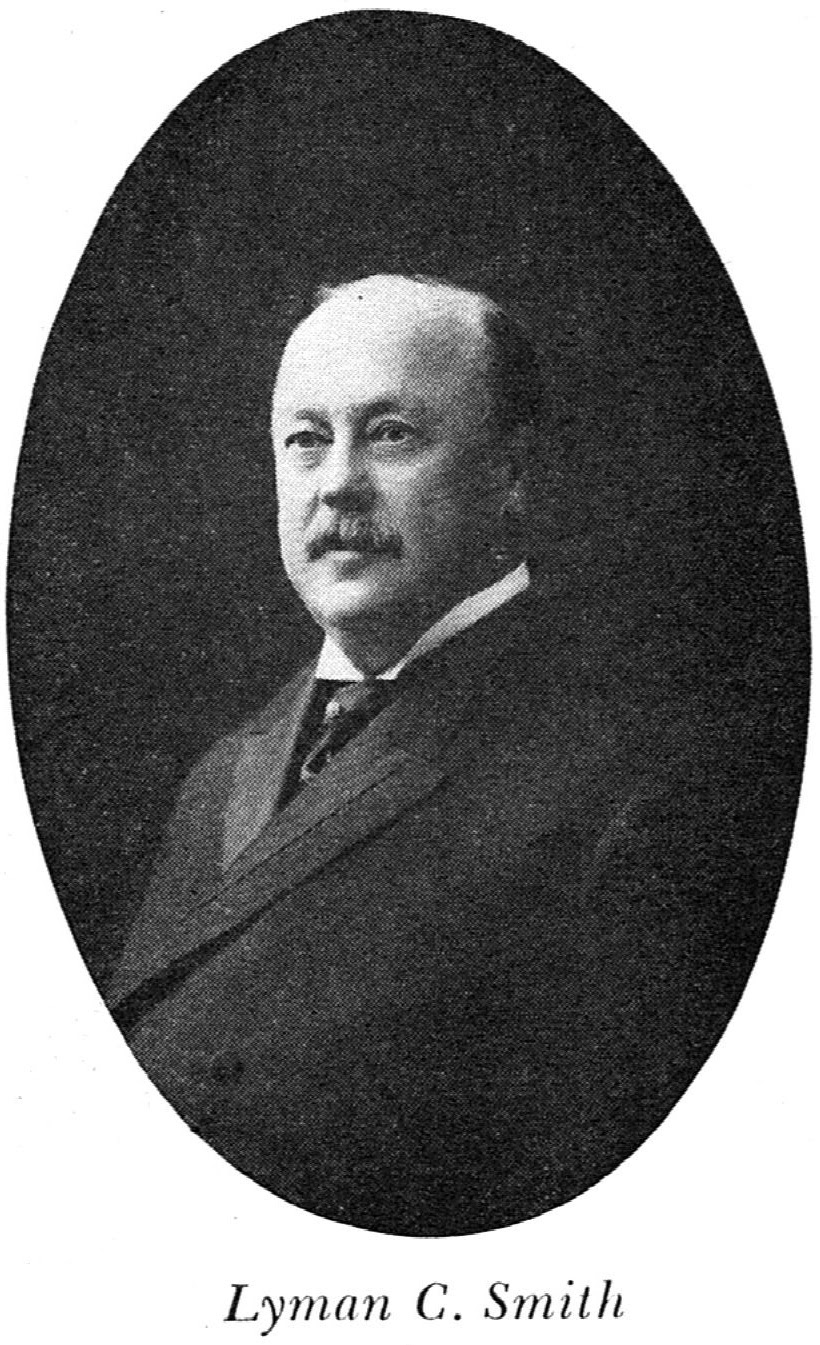 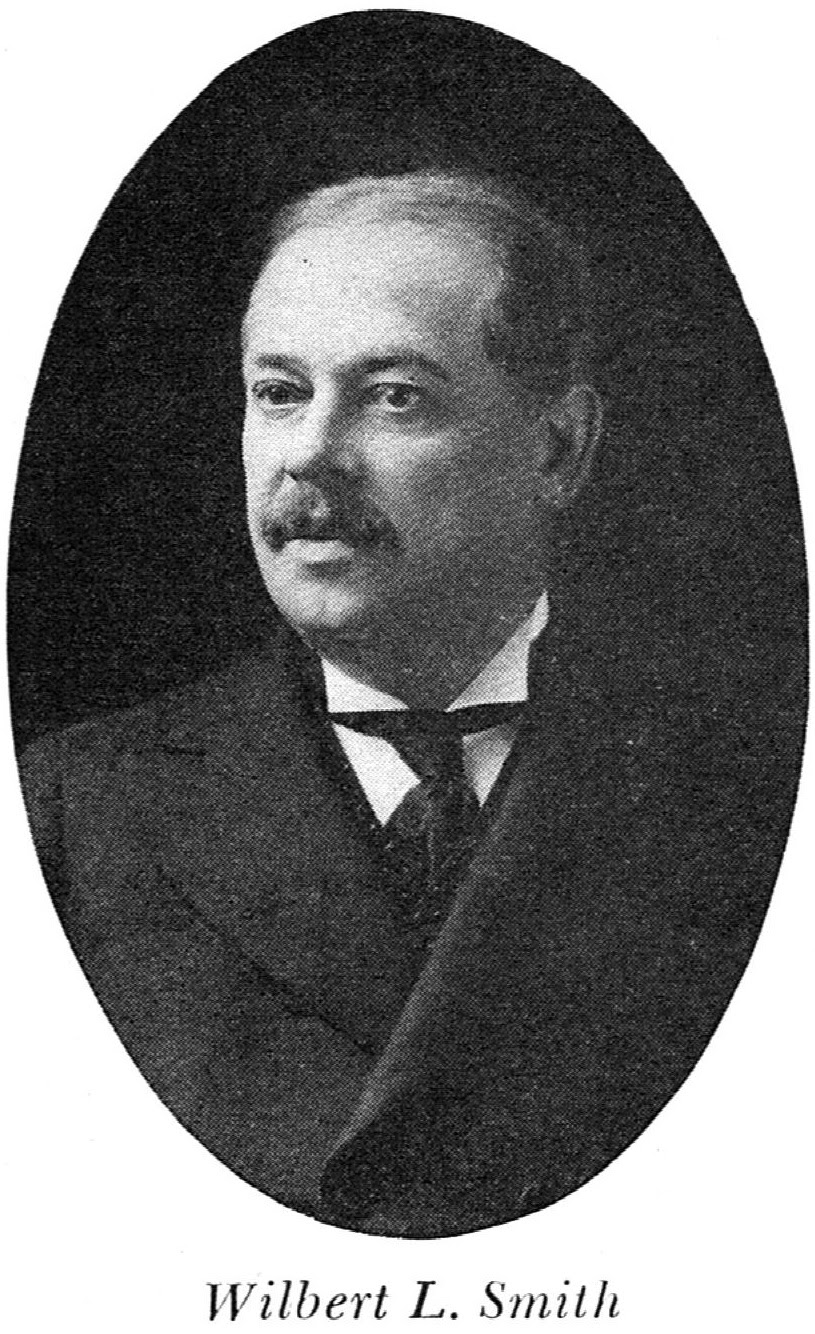 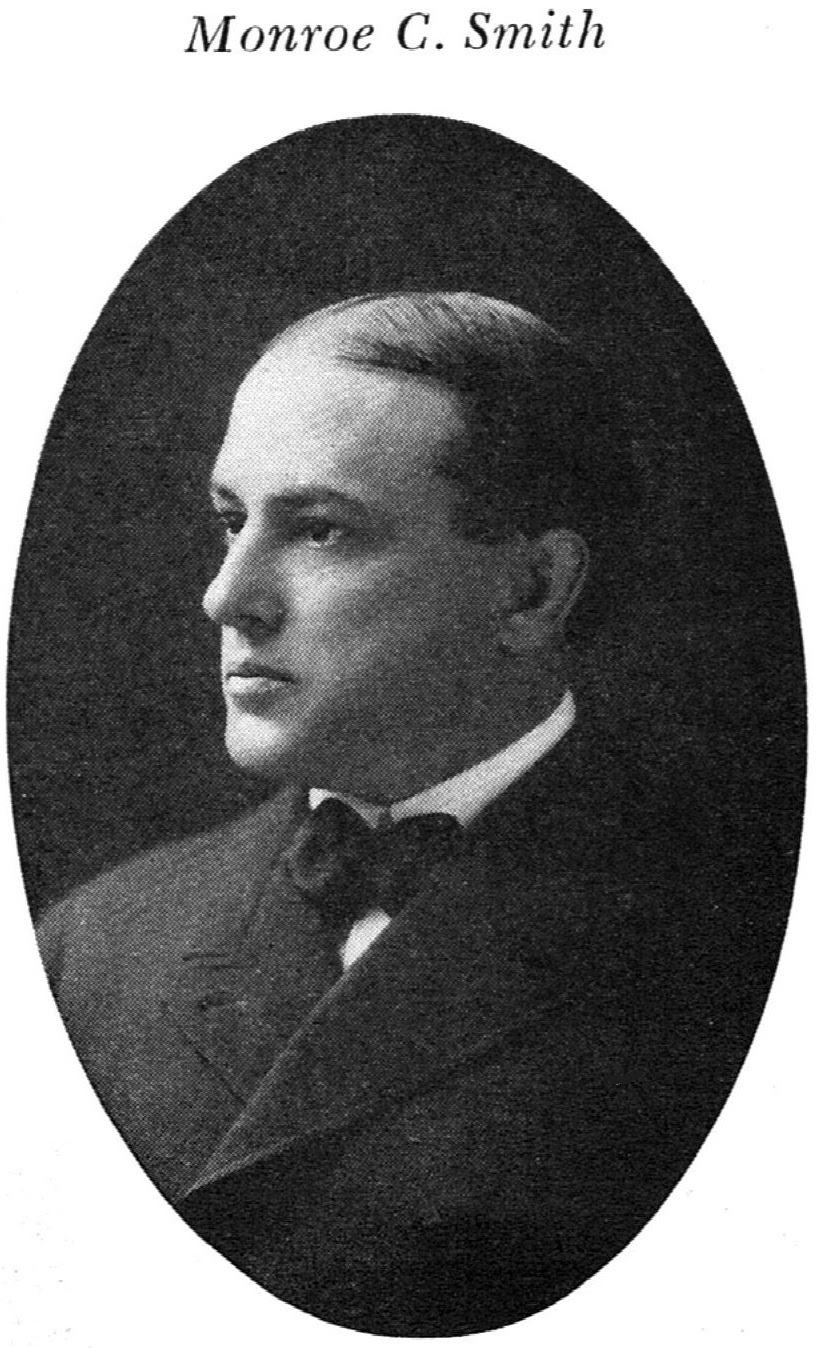 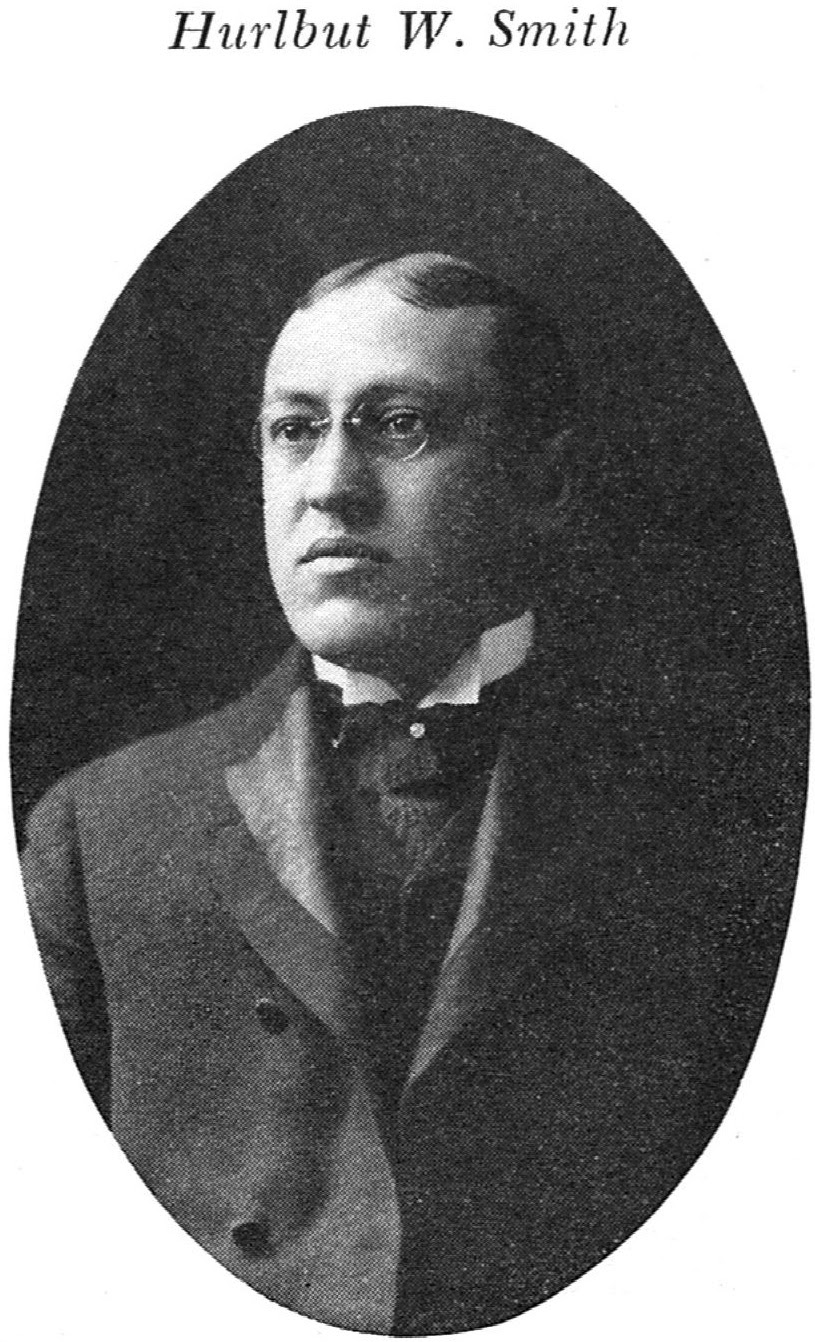 The four Smith brothers, who had taken the Smith-Premier brandname into the trust in 1893, resigned from the Union Writing Machine Company on January 27, 1903, and formed L.C.Smith & Brothers later that same day. Just as their original enterprise, founded in 1888, had risen on the back of Alexander Timothy Brown's typewriter design, so did the Smiths rely entirely on one mechanical engineer to guide their second venture. 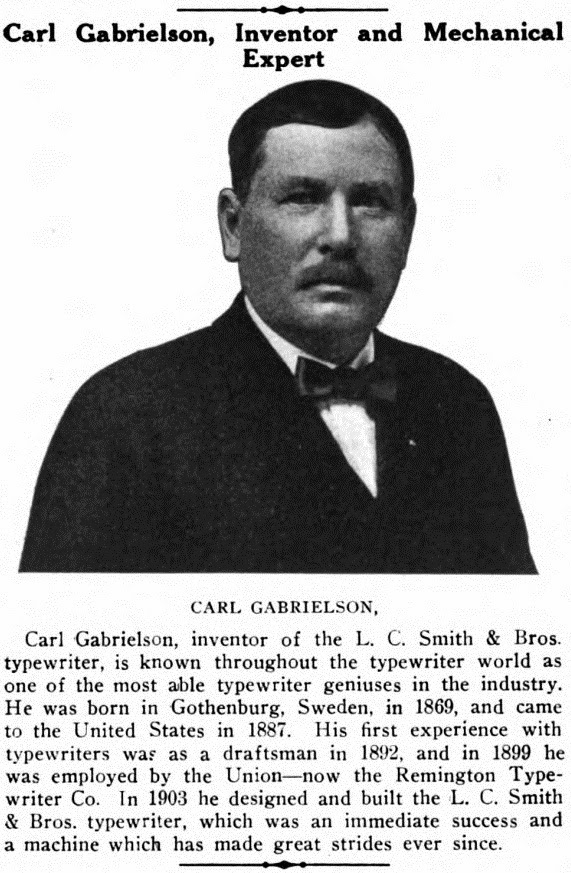 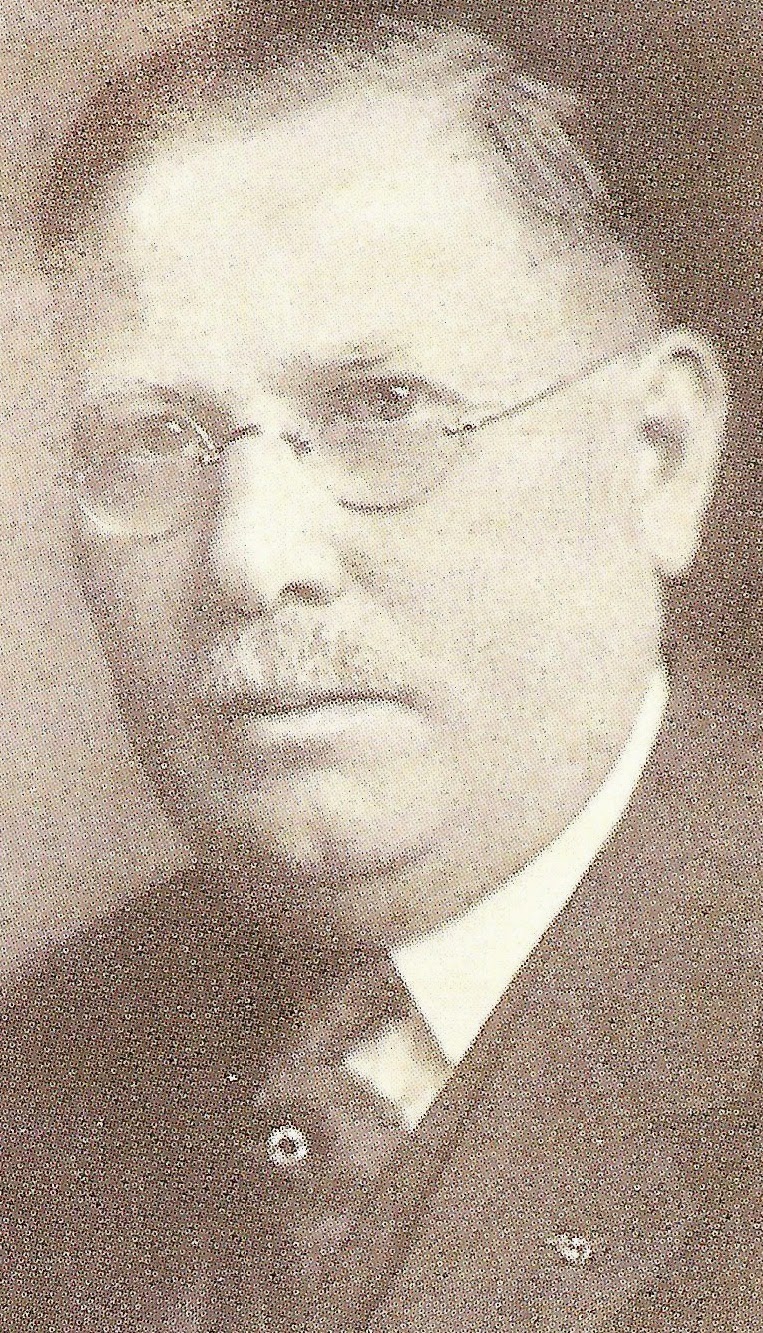 Gabrielson in later life, when he was also vice-president at Meldrum-Gabrielson Corporation, manufacturers of rapid production drilling and milling machines.
He was Carl Gustav Gabrielson, born in Gothenburg, Sweden, on March 6, 1869. Gabrielson arrived in the US in 1887. From 1892 he worked as a draughtsman for New York City typewriter patent attorneys Jacob Felbel and Burnham Coos Stickney, both of whom claimed many of his designs as their own (in lieu of pay). In 1899 Gabrielson joined the Smith-Premier wing of the Union Trust, based at the Merritt Brothers factory in Springfield, Massachusetts. Under the Union's control, Gabrielson's designs were shared by other company engineers, such as Edwin Barney for Monarch. Not surprisingly, Gabrielson left with the Smiths in early 1903. By the end of 1904 he had not one but two typewriters for them. The L.C.Smith No 1 and No 2 came out simultaneously (the No 1 had 76 characters and the No 2 had 84). The No 3 came out in 1907 with a 14-inch carriage (and with a 18-inch carriage in 1925), followed by the Nos 1 and 2 successors, the Nos 4 and 5 in 1911. The No 6 with a 20-inch carriage had emerged in 1909. The Nos 7 (76 characters) and 8 (84 characters) succeeded the No 4 and 5 in 1915. Gabrielson remained chief engineer for the Smith brothers until his death in Syracuse on August 15, 1936, aged 67. His particular line of L.C. Smith typewriters died with him that same year. 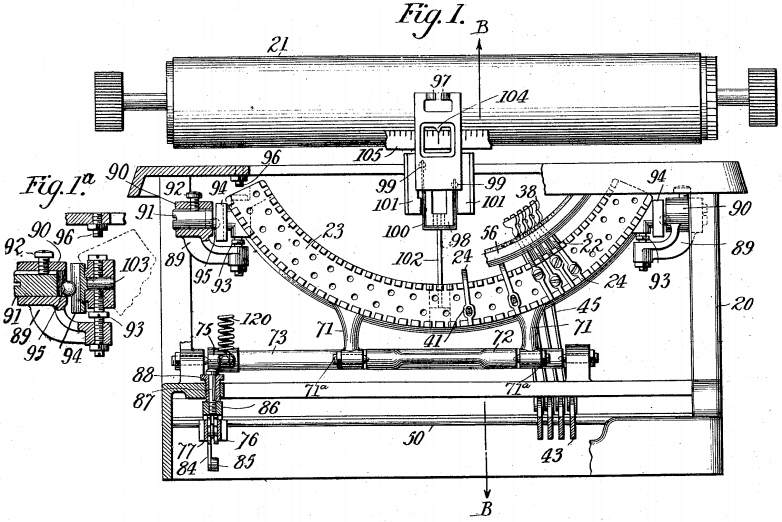 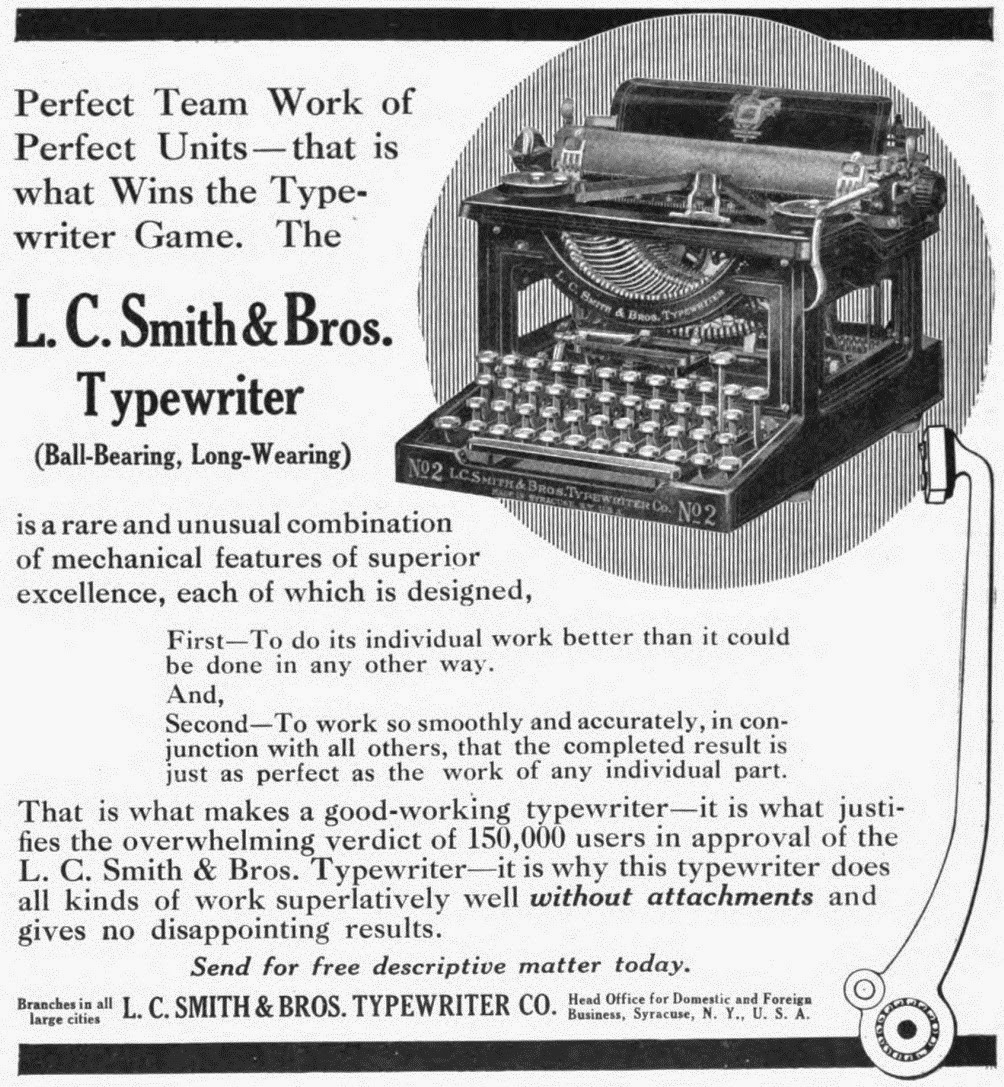 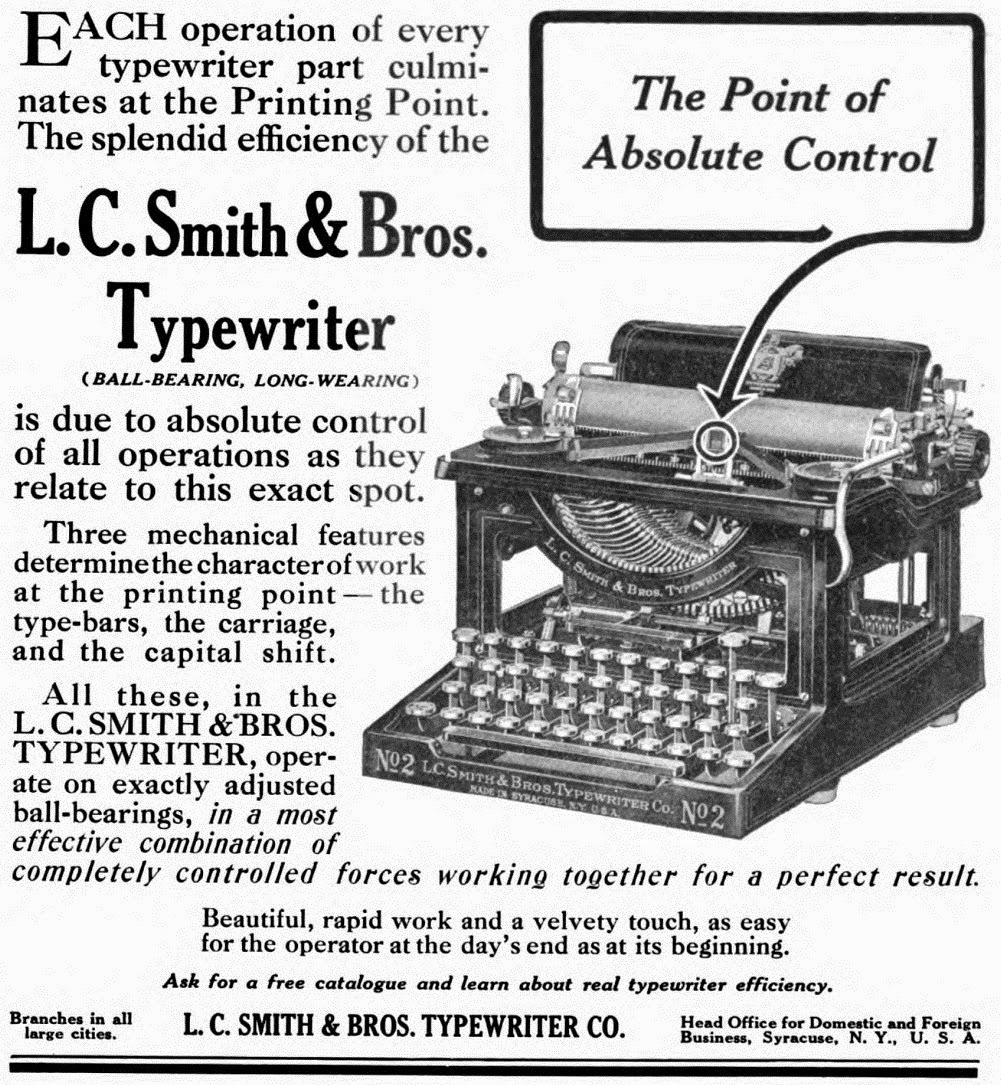 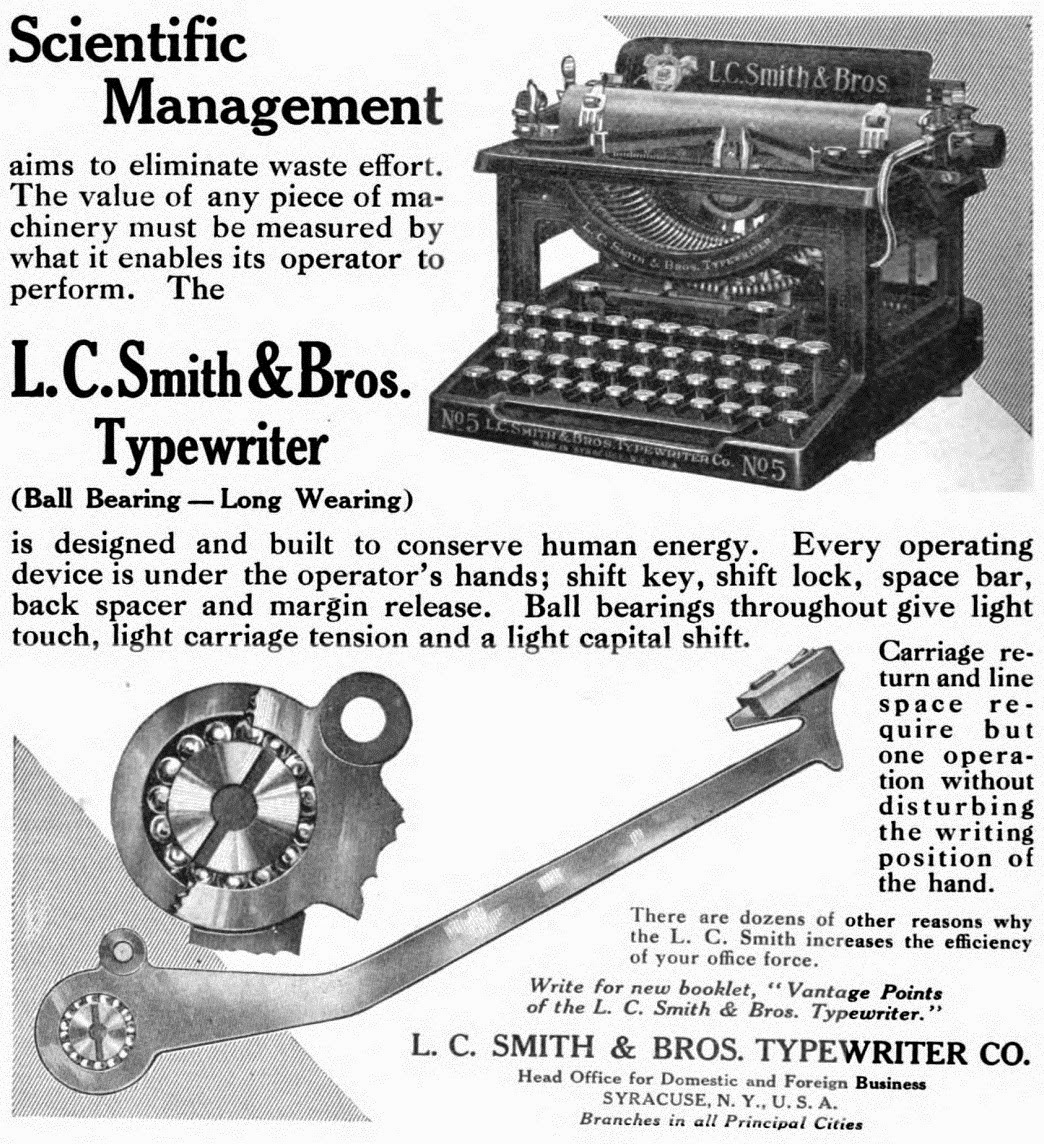 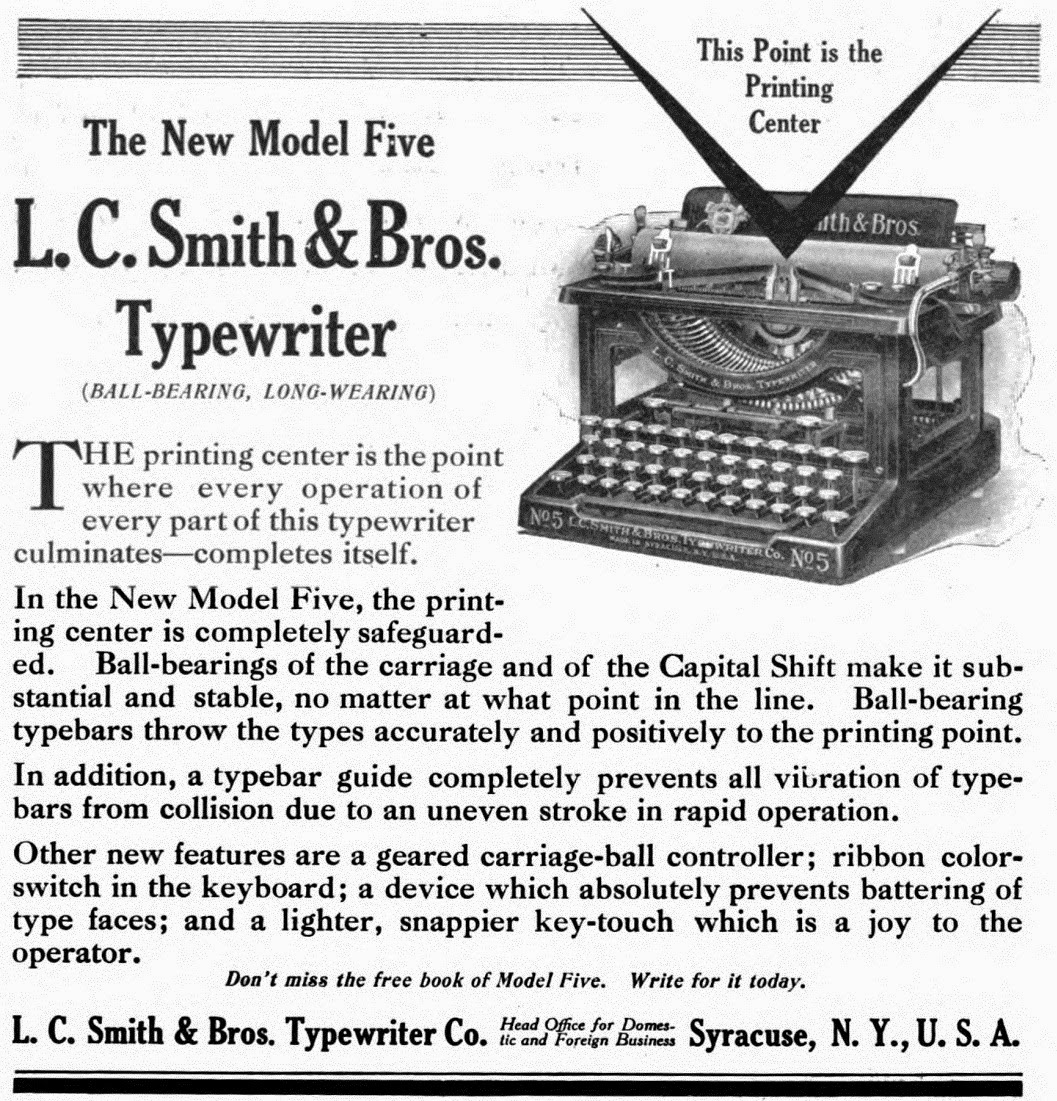 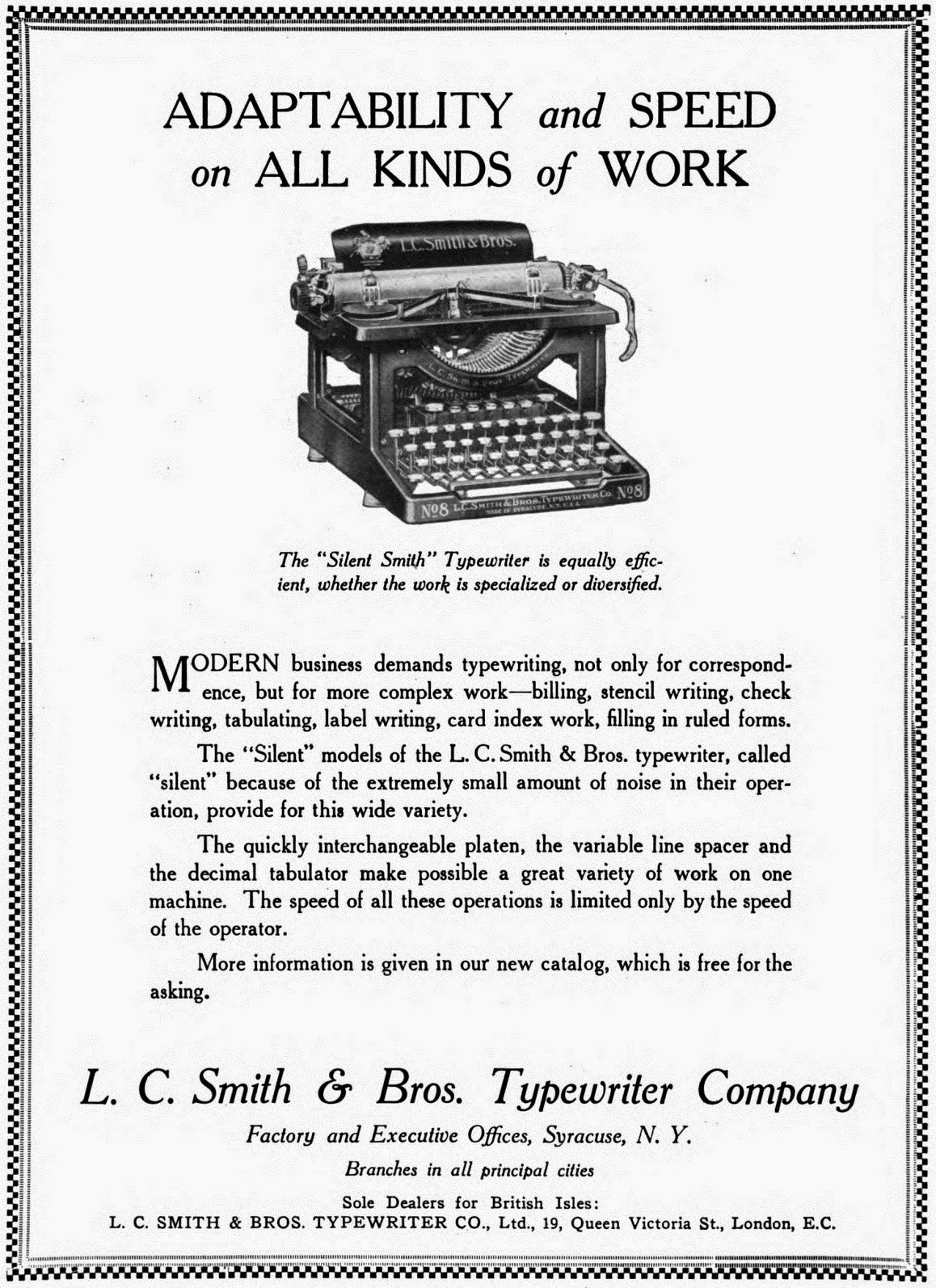 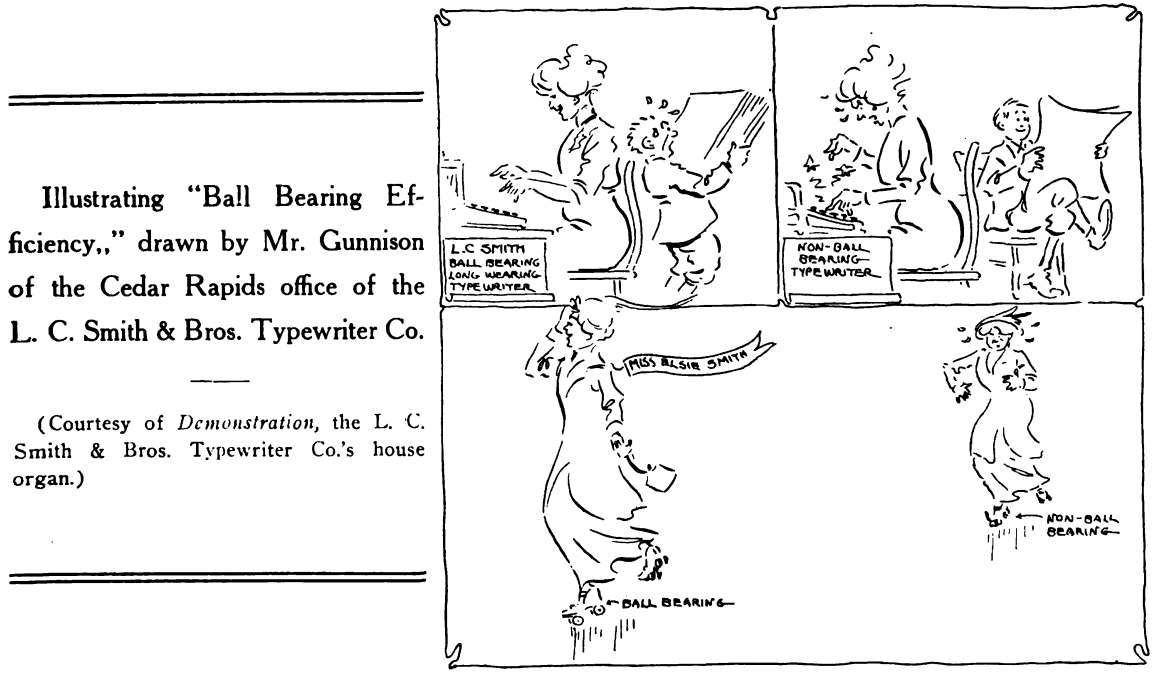 Posted by Robert Messenger at 08:22

Sure is a wonderful looking typewriter.

You need a mystery also, as I have been trying to dig up more information on my Hammond Multiplex as well as my latest
Underwood.

You do a much better job at finding historical information than I could ever dream of doing myself. Great work.

What a fine typewriter — and a fine job of thorough reporting, of course.

Yes, I feel sure this machine was rebuilt and repainted.

Try looking for the serial number behind the backspacer, just inside the frame. It may be obscured by a layer of wrinkle paint.

On my L C Smith 8 -10 In, the serial # is behind the back spacer key, inside on the horizontal frame at the right front, as Richard says.
I got mine in a dirty dingy sad condition - and only because it was $35.00, and I was new to collecting, and wanted everything!
It cleaned up beautifully, and slowly revealed it's superior quality and workmanship, of what was otherwise a rather bland and uninteresting looking machine.
With it's ball bearing typebars (imagine what they must have cost) it is like the Woodstocks, a smart and snappy typer!! There's so little resistance, that the thing almost types itself.
Thanks for the reminder about how great and underated these fine machines are - they are every day typers

I just picked up an L.C. Smith No. 8 today--a basket case with lots of rust but with the logo and lettering.
I couldn't find the SN then I happened on this blog. After looking further I cleaned off the area mentioned in above posts and sure enough there was the SN plate with an easy to read number--in my case SN 349322-8 which makes it manufactured in 1918--98-years ago. I just updated my galleries on The Typewriter Database under TomA2Mich which has some photos I took of the location for the SN.

My lc smith and brothers typewritter has no number on it and I can not find the serial number.Can you give me any helpful tips?Thank you