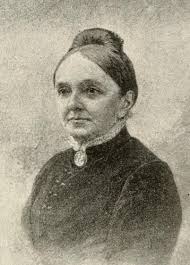 Rose Terry Cooke
The first published story involving a typewriter as a Christmas gift was written by American author and poet Rose Terry Cooke (1827-1892) in 1877, just three years after the typewriter first appeared on the market. Set in New York City, “Mrs Penn’s Present” appears to be in parts autobiographical, as the heroine Caroline “Carry” Chester is also an author and poet. It’s a love story of sorts – man meets woman, falls in love, marries. But jealousy and a small glitch in the typewriter test Jack Penn's blissful domestic life. “Mrs Penn’s Present” was published over a month from late September 1877 in newspapers in Illinois, Kansas, Nebraska, New York, North Carolina and Tennessee.

Rose Terry was born in a farm house on February 17, 1827, in West Hartford, Connecticut, which seems appropriate for someone who first used a typewriter as a Christmas gift in a story. Her mother was Anne Wright Hurlbut, the daughter of John Hurlbut of Wethersfield, Connecticut, the first New England shipmaster who sailed round the world. In 1823 Anne married Henry Wadsworth Terry, for some time a United States Representative from Connecticut. Terry's first published poem appeared in the New York Daily Tribune in 1851. This was followed by a piece for the Atlantic Monthly, the leading story in the first edition. Among those who admired her short stories was a young banker named Rollin Hillyer Cooke, who lived in Winsted, Connecticut. They were married on April 16, 1873, when she was 46 and Cooke 30. Rose died at Pittsfield, Massachusetts, on July 18, 1892, aged 65.

Posted by Robert Messenger at 18:26

Cute (and historic) story! I'm not sure it works technically, with regards to the mechanism of the Sholes & Glidden, but we'll overlook that.