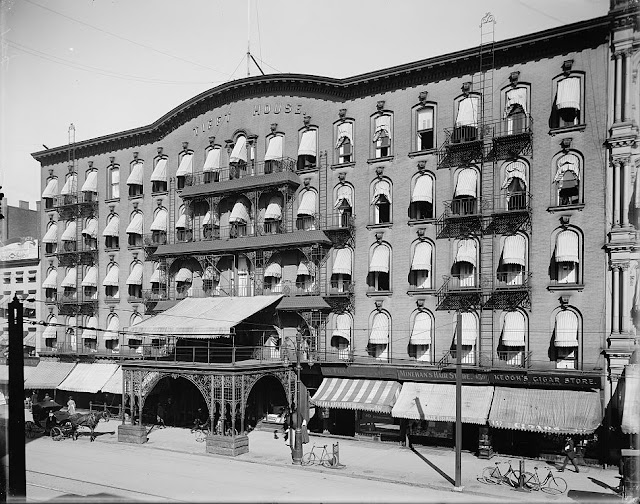 Tifft House at 465 Main Street, Buffalo, New York.
One of the first agents foolhardy enough to take on the onerous task of trying to sell writing machines to an incognizant, nescience public in 1874 was George Bliss Throop III.  In October of that year, just three months after the Sholes & Glidden had first gone on sale, Throop set up ‘shop’ in R.G. Dun & Company’s offices on the corner of Washington and Exchange streets and at his temporary residence in Tifft House at 465 Main Street, Buffalo, New York. Throop’s efforts lasted less than three months, but the typewriter’s promoters, Densmore, Yost and Company, could not have expected a more earnest (and expensive) attempt to convince what interested parties there were out there that this new and unusual machine was a must-buy for them. At $125 a pop ($2946 in today's money) it was a hard ask.

Throop advertised heavily in the Buffalo Morning Express and Illustrated Buffalo Express, the Buffalo Sunday Morning News and the Buffalo Commercial, all to little avail. As Richard Current wrote in his 1954 classic The Typewriter and the Men Who Made It, “During the latter half of 1874 typewriters moved so slowly that Densmore and Yost had to delay payments to all their creditors.” One stopgap solution was to incorporate their  company, which was done on December 28, 1874, when it became “The Type-Writer Company”. This organisation granted Yost and English-born Edward Denning Luxton (1830-1901) the contract to make and sell typewriters, under the company name Densmore, Yost & Company, General Agents. Poor George Throop was out on his ear.

So who was this man, one of the typewriter’s earliest salesmen? George Bliss Throop III was born in 1833 in New Berlin, Chenango, New York. From 1862-64 he was a private with F Company in the 114th Infantry of the Union army. After the Civil War he worked primarily as a carpenter, not the most obvious employment background for someone wanting to sell typewriters. But he did grow up in something of a literary surrounding. His father, storekeeper and manufacturer George Bliss Throop II (1793-1854), a close friend of Martin Van Buren, was Clerk of Cayuga County from 1821-25, Postmaster of Auburn and Cashier of the Cayuga County Bank. He was a member of the New York State Senate from 1828-31 and a member of the Michigan House of Representatives in 1847. His grandfather was George Bliss Throop I (1761-94) and his grandmother Abiah (née Thompson, 1762–1846), a sister of assemblymen Jesse Thompson and Israel Thompson. His mother, Frances (née Hunt, 1806-72) was a sister of United States Supreme Court justice Ward Hunt. His step uncle was Congressman Israel T. Hatch (1808-75) and his step-aunt Eliza Hatch (1800-85) who married first Congressman Gershom Powers (1789-1831) and then Judge William B. Rochester (1789-1838). Even more significantly George B. Throop III was a nephew of Enos Thompson Throop (1784-1874), a lawyer, politician and diplomat who was the 10th Governor of New York, from 1829-32. In 1814 Enos was elected to the 14th United States Congress and in April 1823 he was appointed Judge of the Seventh Circuit and remained on the bench until 1828. In 1833 he was appointed by President Andrew Jackson naval officer at the Port of New York, an office he held until February 1838, when President Van Buren appointed him Chargé d'affaires of the United States to the Kingdom of the Two Sicilies, where he remained until January 1842. The town of Throop, Cayuga County, is named after him. 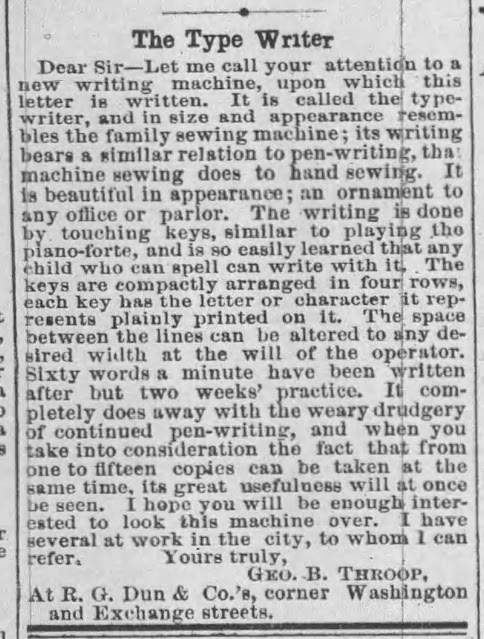 One of George Bliss Throop III’s half-brothers was the novelist Higby Throop (1818-1896). He first wrote under the pseudonym Gregory Seaworthy but later took his father's first name, George, as his own. He spent much of the 1840s as a schoolmaster and mariner. Six months after Higby had passed, George Bliss Throop III died, on September 29, at his home at 21 West 18th Street, Manhattan. By then people were having no trouble selling typewriters. 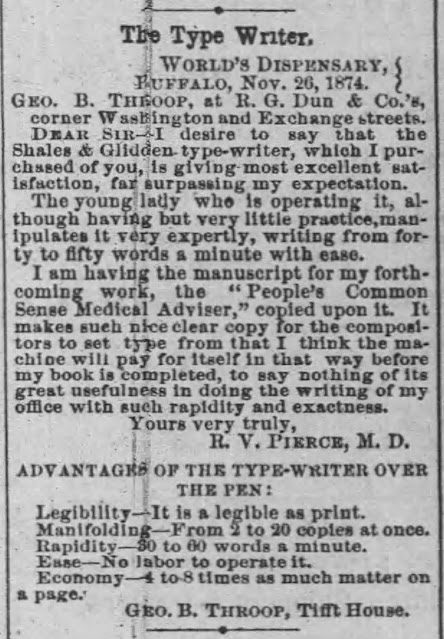 Posted by Robert Messenger at 22:24

I don't think I've seen this expression before: the "Writer." I like it!