My Christmas Plana: An Olympia Made in the Soviet Zone 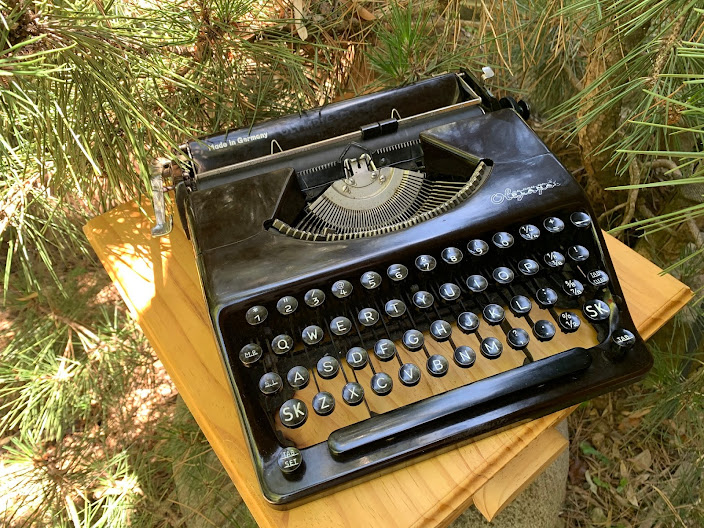 This is my 2020 Christmas gift to self. I found the bakelite Olympia Plana, in excellent working condition, at a very good price in a bric-a-brac shop called “Lost and Found Market” on Brunswick Street in Melbourne three weeks ago. Making it all the more alluring is some mystique about its year of manufacture. Of course, all Planas, whether labelled Olympia or Optima, were made in Erfurt, since Johannes Krüger’s blueprints never made it out of Erfurt. On July 3, 1945, Erfurt became part of what was then known as the Soviet Zone of Occupation. But the “Made in Germany” line on the Plana’s paper plate could mean Nazi Germany or East Germany, depending on when the machine was made. The serial number on this one is 204214, and therein lies a puzzle. The Typewriter Database gives the last year of manufacturing of the Olympia Plana as 1948, with serial numbers between 191377 and 198118. The TDb adds “After 1948, [the] Olympia factory becomes East German Optima.” As for Optima Planas, the TDb has the start of manufacture in 1950, with the serial number 203759. But the TDb also has an Olympia Plana Model A owned by Torsten Ludwar with the serial number 205177. The year of manufacture is given as 1950, and it is identical to my machine. I believe my Plana was made that year or perhaps in 1949. And that means an Olympia made in what had already become East Germany - that is, beyond the Iron Curtain.

All this may well be explained in Eberhard Lippmann’s 2008 Die historische Entw icklung des Betriebes Optima Erfurt, in which he points out that the West German company Olympia Hamburg-Wilhelmshaven won a 1951 court decision over what had become known in 1946 as Olympia Büromaschinenwerk Sowjetische [Soviet] AG für Feinmechanik Erfurt, a part of a Soviet joint-stock company incorporated into the Totschmasch group. This case gave Olympia Hamburg-Wilhelmshaven exclusive use of the Olympia trade name. Lippmann says that in 1950 the Erfurt plant became known as VEB Olympia Büromaschinenwerk Erfurt and in 1951 as Optima Büromaschinenwerk VEB Erfurt.

What emerges from the serial numbers is clear evidence that the Erfurt plant kept making Planas under the name Olympia right up until the time Olympia Büromaschinenwerk Erfurt lost the court case to Olympia Hamburg-Wilhelmshaven in 1951. What also becomes apparent, from articles published in United States newspapers in 1951-52, is that there may have been a Soviet economic imperative for doing this. That is, to continue to trade under Olympia’s good name. Given this, it’s possible serial numbers on the Olympia Planas played a part in the subterfuge, to give dealers in North America the false impression the machines were from 1949 being made in West Germany (Macy’s was among the stores fooled). Lippmann concedes that in 1951 at least a small number of Planas, perhaps as few as 150, were exported to the West, but were they labelled Olympias or Optimas? Olympia Planas were advertised in Western Australia at the end of 1949 and in August 1951 in Canada. The Canadian ads said the machines were imported direct from the “British Zone of Germany”. (Olympia portables advertised in Australia from 1950-52 were made in  Wilhelmshaven.)

In January 1951 American political journalist Theodore Harold White (1915- 1986), filing from Paris for the Overseas News Agency (ONA), wrote a widely-syndicated column describing the Western distribution of the Soviet-made Olympia Plana. The one White had was stamped “Made in Germany” and had the serial number 206405. White said the Russian Government was offering the portable for sale at $25, “half the cost of a typewriter anywhere in Europe”, and claimed they were shipped out of Leningrad. White and US typewriter dealers wondered whether the Soviets were selling the machines at a loss.

“Or another thesis,” added White. “Are the Russians so desperately short of dollars to purchase essential materials that they will offer a valuable typewriter like this at bargain prices just to earn dollars to buy the raw materials we control?” He went on, “Were these typewriters wrung out of the Germans as reparations … Do the Russians get these typewriters from the Germans by one of their tough trade treaties … How can Eastern Germany have reserve capacity to make such typewriters when it is so short of steel?” White would have been astonished to learn that in April 1952 Erfurt signed a deal with the Chinese Government to build typewriters with three keyboards of 2500 characters.

White concluded, “The typewriter is one of the objects that illuminate our dark times. Never has the world been sealed into such air-tight halves, one half so completely ignorant of the life of the other half. We have no idea what else the Russian industrial empire can make, at what cost, under what circumstances, under what pressure and motives.”

Posted by Robert Messenger at 18:24

Enjoy it! These artifacts from the transition to Communist rule are so interesting. I can't say I like using a Plana, but it is an ingenious design.

Congratulations to your Christmas Plana. And thank you so much for the interesting background story. I would never have thougt that typewriter production would make it to political column in the US or any other country.
In 2019 I found a Plana in a thrift shop here in Cologne, Germany. Built in 1954 it works great and I enjoy its design and the shiny lacquer.