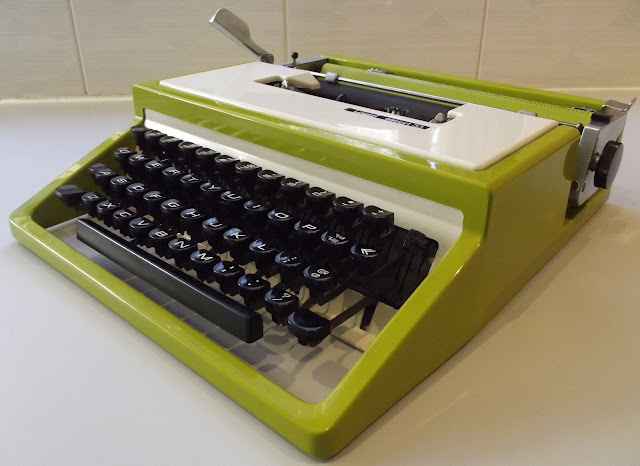 I am no huge fan of the Olivetti Dora, although most of this line are preferable writing machines to the Olivetti Valentine, which uses the same mechanical design but, because of its heavier ABS mask and lightweight front section, has a more marked weight imbalance. 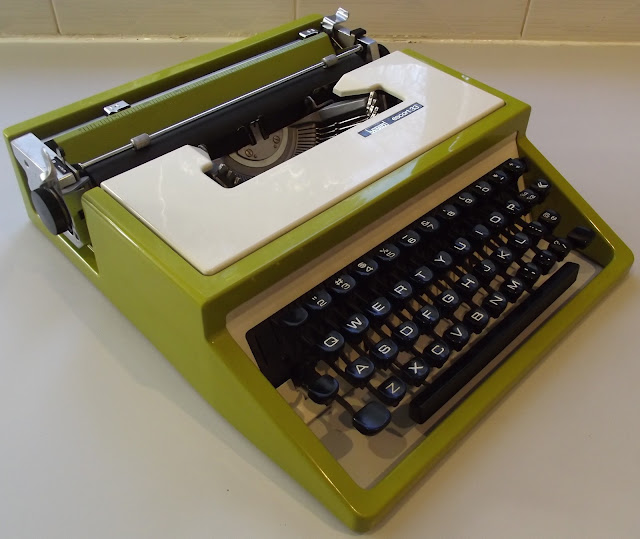 Nonetheless, for many years I had looked longingly at one variation of the Dora, the Montgomery Ward Escort 33. One of these was for sale at Scott McNeill’s Vintage Typewriter Shoppe. The typewriter no longer appears to be there, but I hadn’t been prepared to pay Scott’s asking price for what is essentially just another common-or-garden Dora anyway. 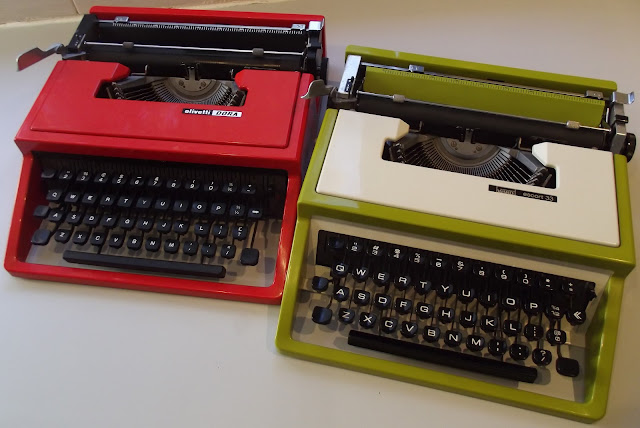 So when an Escort 33 came up for sale on Australian eBay at what I thought was an affordable figure, I snaffled it. 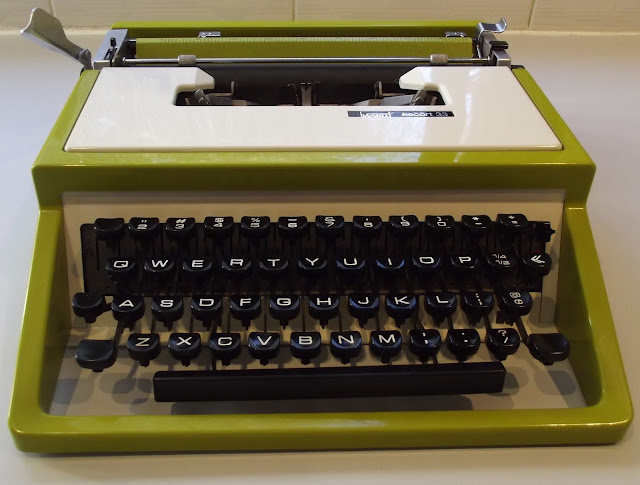 I realise I’ve been saying this a lot lately, but this machine turned up in an absolutely filthy state. It didn’t take much effort to clean it up nicely, but I could hardly believe such a small typewriter could accumulate so much muck. I really had to wonder where it had been kept and what it had been used for. 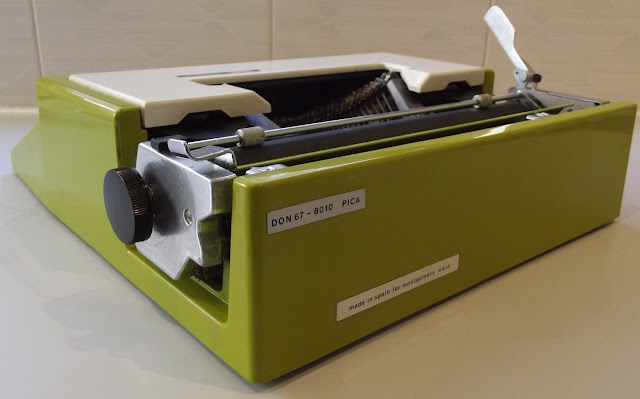 Anyway, having cleaned it up, I’m not all that disappointed.

This particular Escort 33 is a terrible typer (at least I found it so), worse than even some other Doras (though not quite as bad as the Valentine). 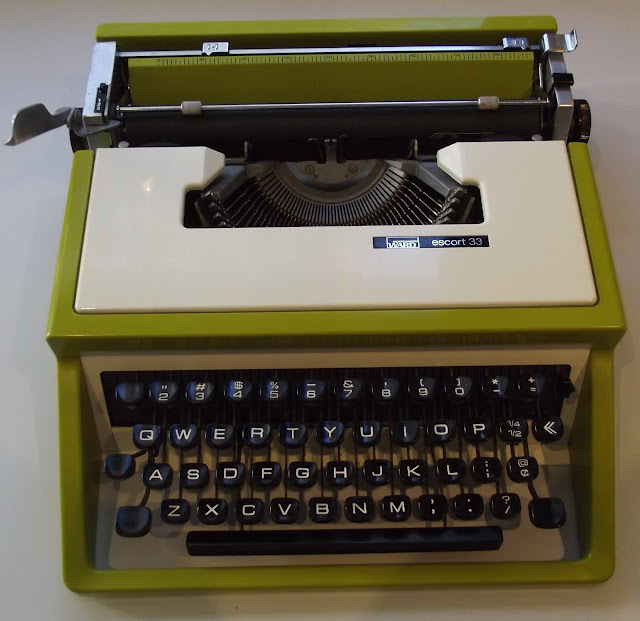 But I was attracted to it in the first place by the unusual colours, and I find these quite appealing. This MW Escort 33, however, is not destined to remain in my collection for very long. 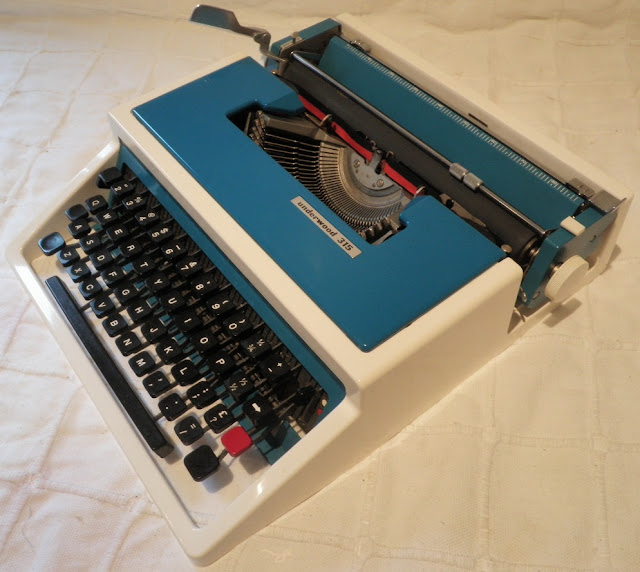 What I probably will hold onto is the red Dora and this turquoise-topped Underwood 315, another version of the Dora (along with the generally more plainly coloured Underwood 310).

Another Montgomery Ward Dora variation is the Escort 77 in black. This example is from the Eclectisaurus Collection in Toronto: 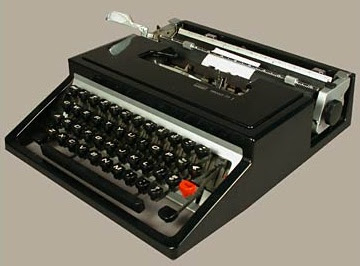 And I remain very keen to get my hands on the later model, the bright yellow Montgomery Ward Escort 55, also reputed to be an Olivetti design (certainly the carriage and its lever look very familiar). 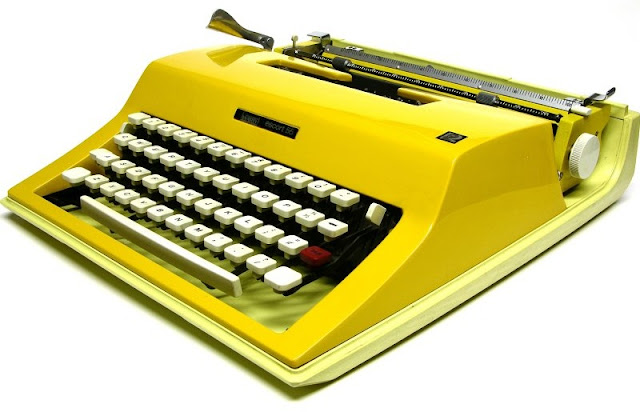 Alan Seaver Collection,
Machines of Loving Grace
TOMORROW: Yet another Montgomery Ward, but this time one which also masquerades as the "Mark I Series" brand in Australia. It's actually an Antares Lisa 30, and it does type an awful lot better than a Valentine!
Posted by Robert Messenger at 17:54

Well, the Escort cleaned up nicely and it does have a certain design presence.

Still, the design appeal of most typewriters for me drops off sharply after 1960. That's about the year when manual typewriters reached maximum technical perfection and there was still some attention paid to visual snazziness. After that, it was a long slide downhill. The explosion of loud plastic colors around 1970 is a tacky attempt at style without sophistication or quality.

Thanks for your blog and lovely photos! I just acquired a red Dora today and thought I'd google them, it's such a beautiful thing, what style! Having learned to type when I was 12, on an Imperial 66, hmmm quite a few years ago, there was something amazing about actually inserting a white sheet of paper and typing again, and surprisingly so after flat computer and touch screen keyboards, I didn't do too badly! Barbara

So it is not just me finding the valentine not the top to type :) which is your view the best typewriter in terms of writing comfort and the worse?

Very nice blog! I just got a Olivetti Dora and was wondering what type face and size it uses... Do you know?