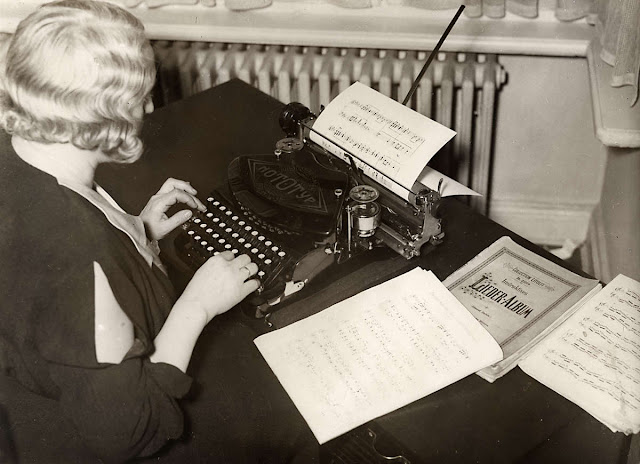 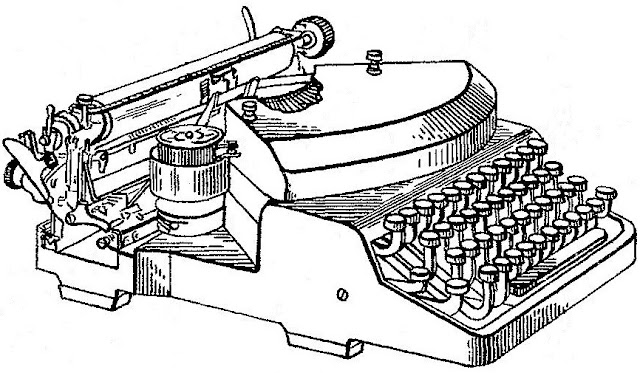 One of the delights of researching the "On This Day in Typewriter History" series is that sometimes I stumble across something that doesn’t quite fit comfortably with conventional typewriter wisdom.
For example, it seems to have been long accepted that the Melotyp music writing typewriter of the late 1930s was the work of the well-known German typewriter design engineer Carl Winterling. 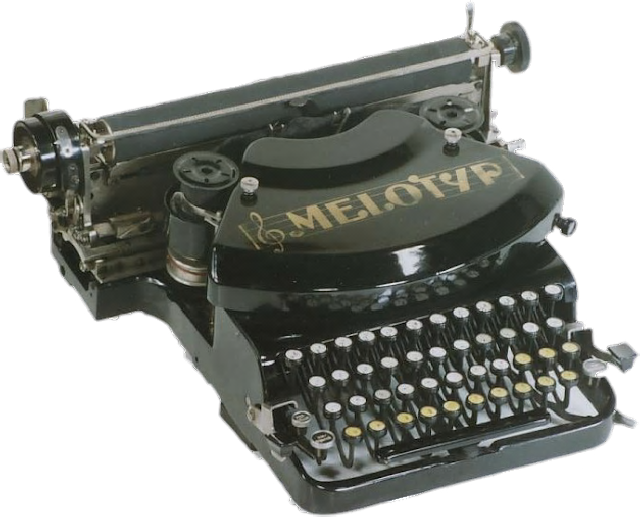 From the collection of the late Tilman Elster
I can’t quite put on thumb on how, or when, this misconception came into being, but it turns out the wrong man has been getting the credit all along.
The Melotyp actually began life as the Nototyp, designed by one Gustave Rundstatler of Berlin in the early 1930s, and built by Nototyp-Rundstatler GmbH of Berlin using the “Rundstatler system”.

On this day, September 24, in 1936, Rundstatler applied for a US patent for his design. Rundstatler had been issued with a German patent for the machine in 1933. It was also patented in Britain. 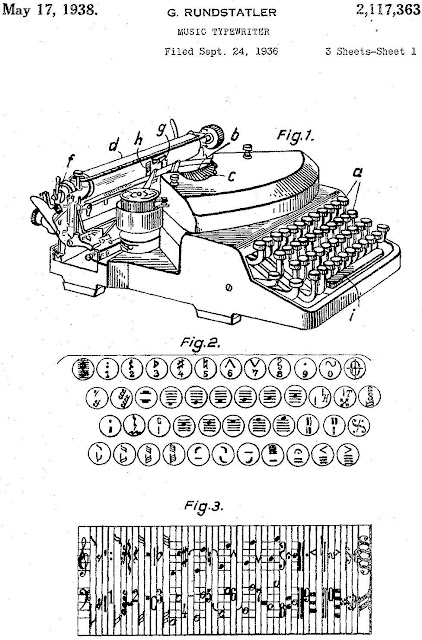 There is much evidence from this time, and earlier, including European daily newspapers and publications from the US to Australia, to support the claim that Rundstatler, not Winterling, was responsible for this invention. 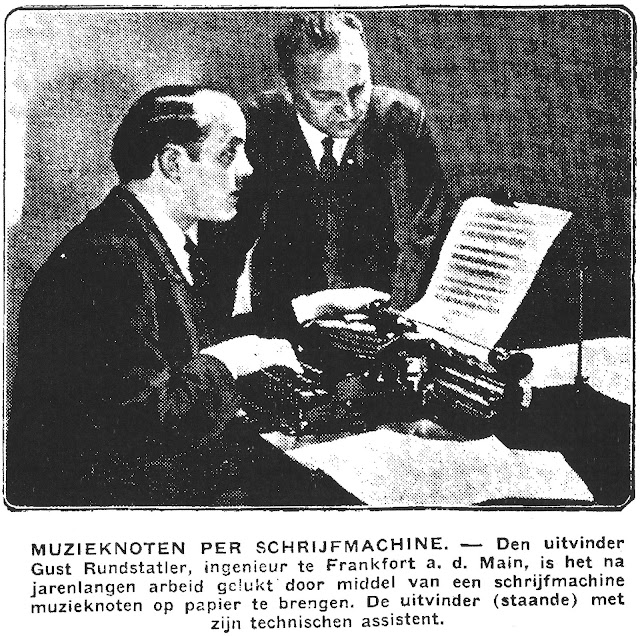 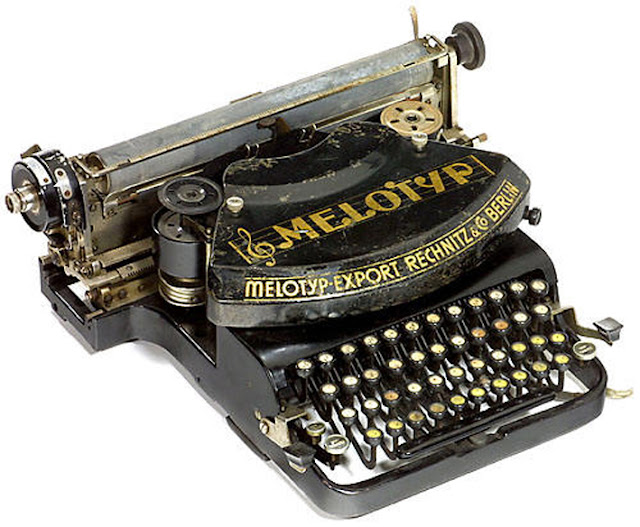 From the Uwe Breker Collection
Having said that, there are many subtle variations (mostly nothing more than name changes) on the thrust-action typewriter theme introduced by Wellington Parker Kidder at the end of the 19th century (Wellington, Empire), the rights to which were sold to Adler. The Nototyp and Melotyp are among the more radical, yet still two of them. 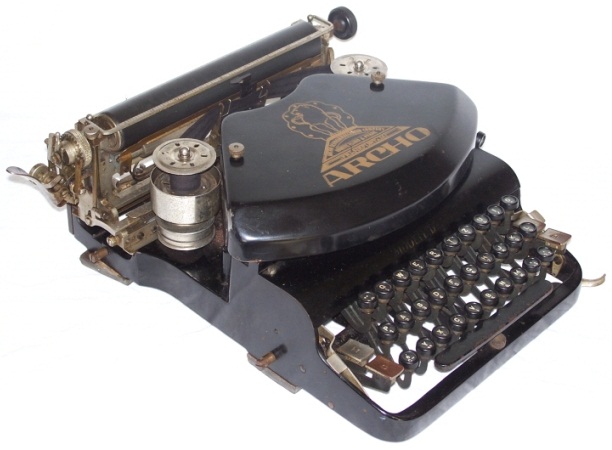 From Wim Van Rompuy's Collection
Winterling, who at one time worked for Adler, was behind a number of these variations, including the Archo, and it may well be that Rundstatler sold his design for the Nototyp to enable the Melotyp to be built by Otto Rechnitz and Alfred Bernstein in Berlin. (A Frankfurt company, Zimmer, Zinke & Co, built another Wellington lookalike, the Protos, between 1922-1925.) 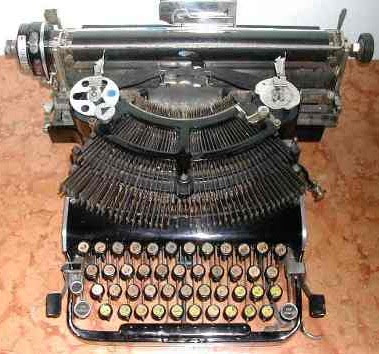 Incidentally, there appears to be one of these Nototyps for sale right now, in Montevideo, Uruguay, for $US4900. However, this Nototyp doesn’t seem to have a top plate. Oddly enough, the seller is crediting the design to Winterling. “It was designed and built for this purpose [writing sheet music] by Carl Winterling in 1937… Measures 30 x 36 x 20cm, carriage width 40cm.” 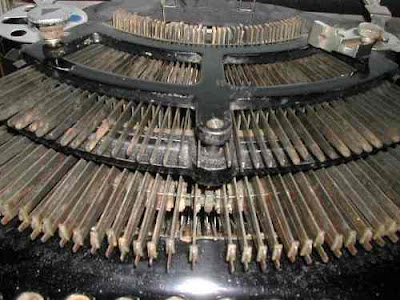 When I last looked at the development of music writing typewriters, on July 8 last year, I went along with conventional wisdom by saying the Melotyp was “invented by Carl Winterling in Frankfurt. It won the grand prize in the 1937 International Exhibition in Paris. 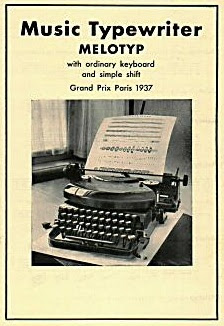 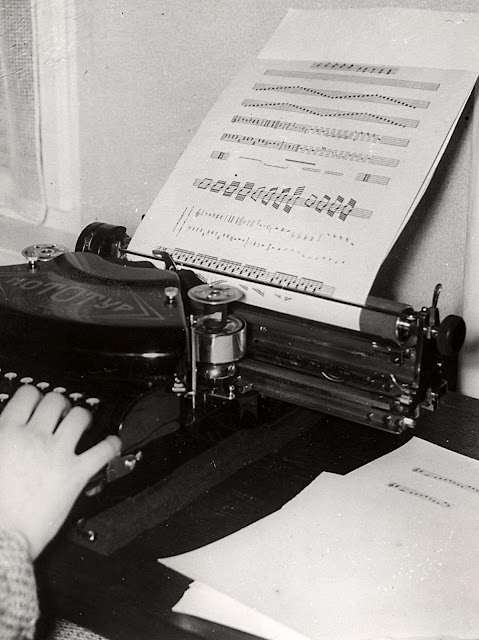 The 1937 image at the top of this post, however, is from the German National Archives and shows a woman typing on a Nototyp, “A typewriter which makes it possible to put music notes on paper. Invented by the German engineer Gustav Rundstatler.” A close-up of the same image in shown above. 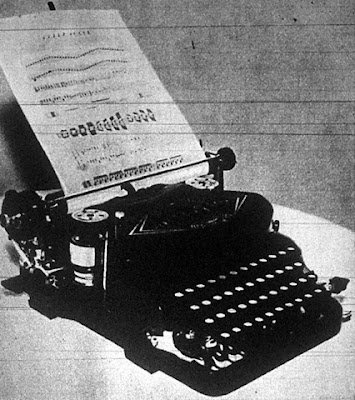 As early as September 9, 1931, the influential Amsterdam-based liberal daily newspaper, Algemeen Handelsblad was running picture stories of Rundstatler at his typewriter (see image above), underlining the fact that the Nototyp clearly pre-dated the Melotyp.
On May 21, 1932, the US magazine The Literary Digest lifted a piece from La Nature of Paris publicising Rundstatler’s invention. 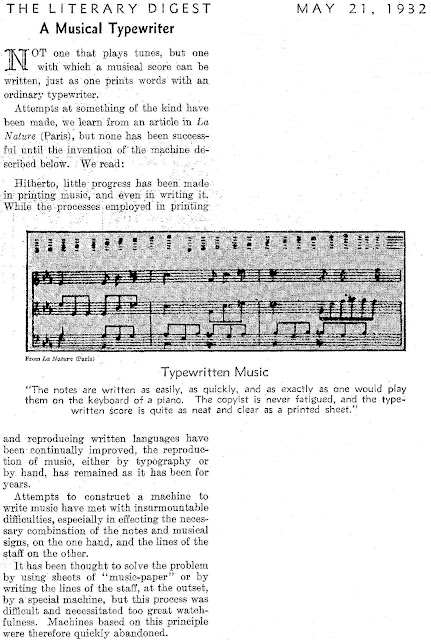 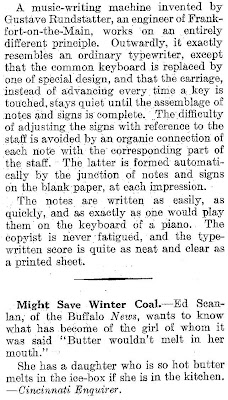 And on August 8, 1932, an Australian publication, Sign of the Times, ran the same item. 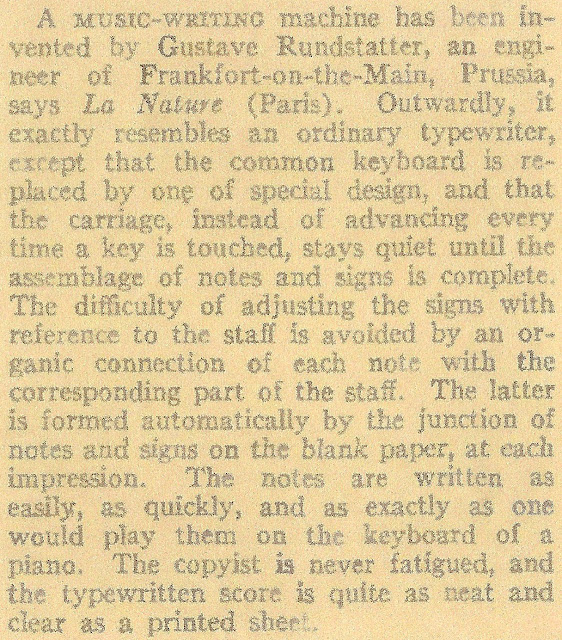 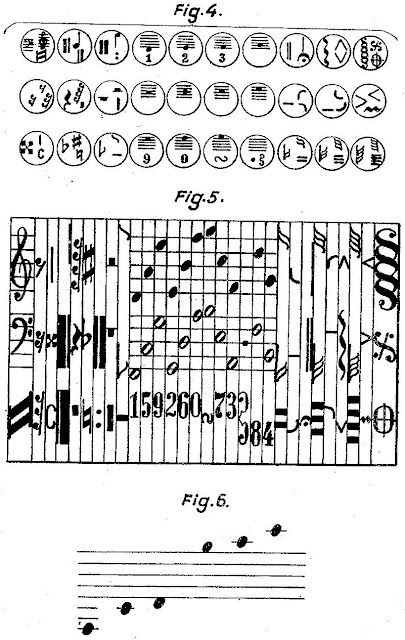 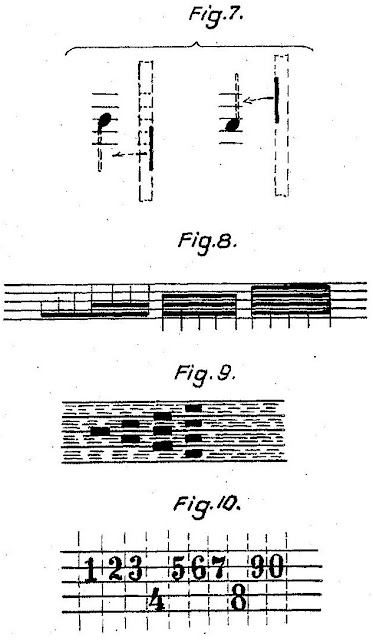 Posted by Robert Messenger at 09:11

That Melotyp is absolutely beautiful! I have no use for a music writing machine, but I cannot help gazing with lust in its general direction.

I never knew such a machine existed. It is truly a beautiful machine. I wonder how useful they really were.

I never heard of the Nototyp! Good discoveries.

I believe I may have one of these, unless there were some similar ones made at a later date by a different manufacturer. It was left to me in my late father's estate. He was a musician and enjoyed collecting rareities. However, at the moment it is in storage. Would the information in this article be a defining factor that mine is authentic? I can find no other information on the melotyp/nototyp.

Congratulations to 'Unknown' on your find in your father's shed. I'm guessing it was you that brought it to the 'Tussen kunst & Kitsch' programme that aired this week. In amazing condition too, you may have located one of the machines remaining in Europe.

Anything you've on where it came from would be very interesting to collectors/enthusiasts - anything on serial numbers etc as well (see www.typewriterdatabase.com).