Never Too Young To Type (2): Typewriters in the (Primary) Classroom

Someone joked the other day that my typewriter presentations are attended by either six- or sixty-year-olds. I do think I catch a few in the audiences who are between those ages. But this morning it was off to a local primary school for a "show and tell" about how we did things in "the olden days".
A Royal Scrittore made this year (just to prove they still do make them) and a Remington Riviera made 50 years ago went down well. But as always the 1895 Blickensderfer 5 was the hit of the day - especially the fact that it still typed beautifully and its tiny ink pad was still full of blue ink. There were queues just to get blue Blick ink on the finger! Interestingly, the children found the 1920s Remington duotone far easier to type with than the Scrittore or the Riviera.
Anyway, it was fun all round, and the students now want a typewriter for their classroom ... 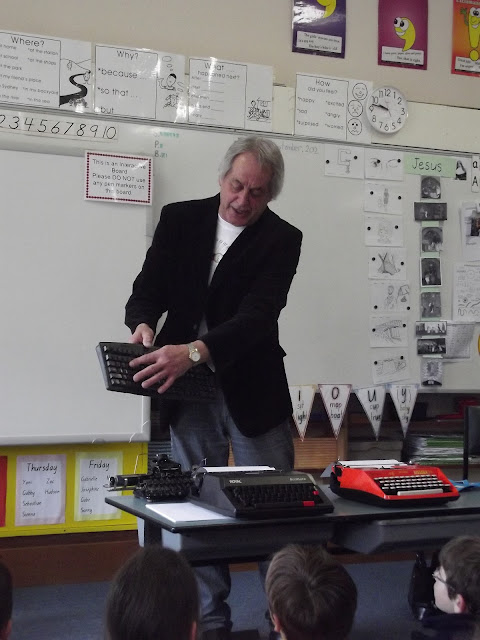 Alan Seaver will no doubt be pleased to see we teach Australian children what vowels are (plus one). The vowel pennants being placed the way they were was handy while demonstrating how QWERTY came about. 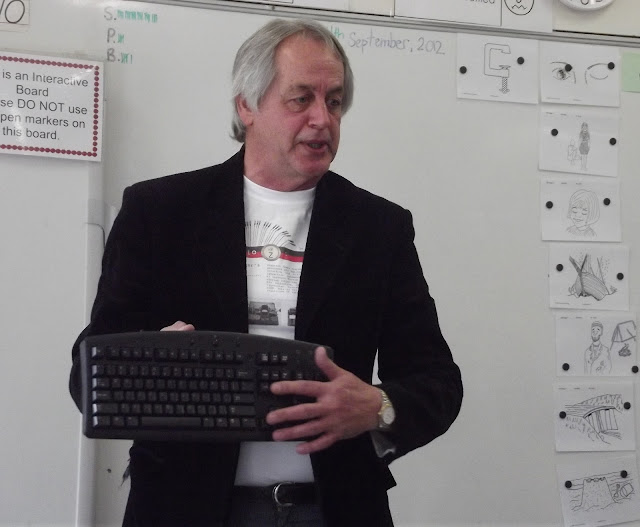 "Why does this key on a computer keyboard say 'shift'?" 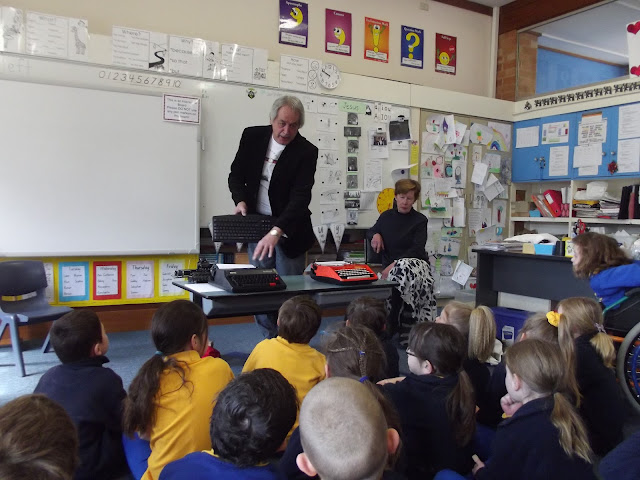 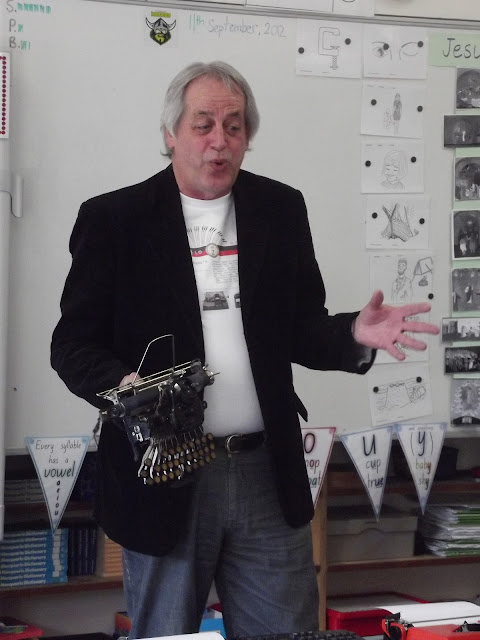 "No electricity, no batteries, no computer tower, no monitor, no printer, no ink cartridge ... just an out-and-out pure writing machine ..." 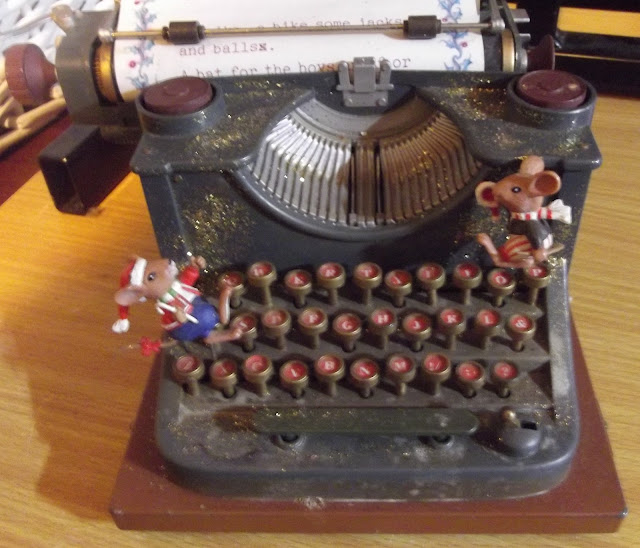 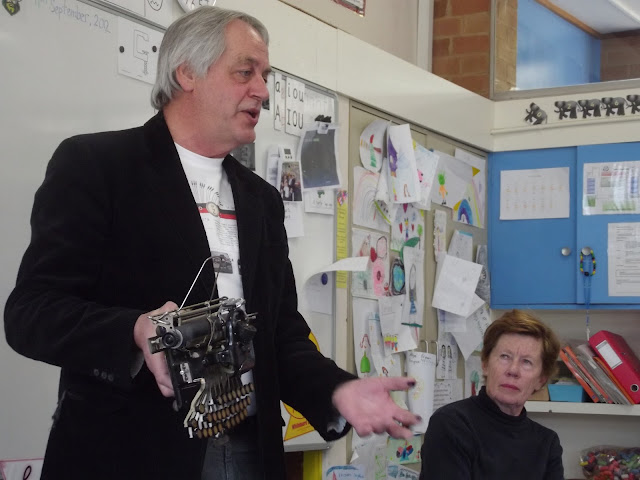 Come on! What else would you take on camelback into a desert in the Sudan to write about a battle involving General Kitchener? (Note the ink on the fingertips.) 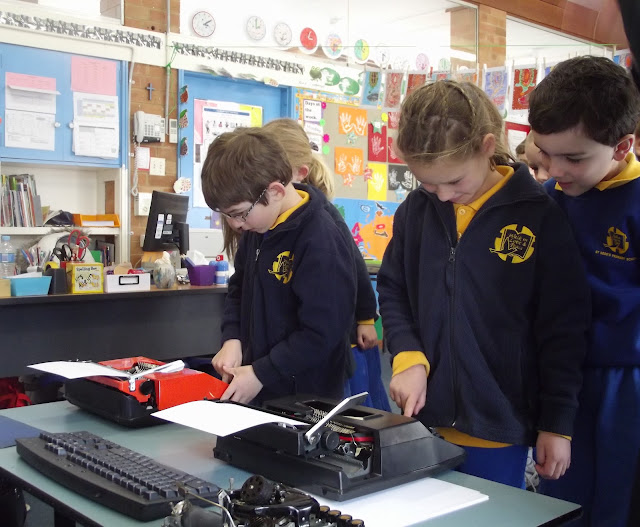 The red Remington Riviera, left, was a success. 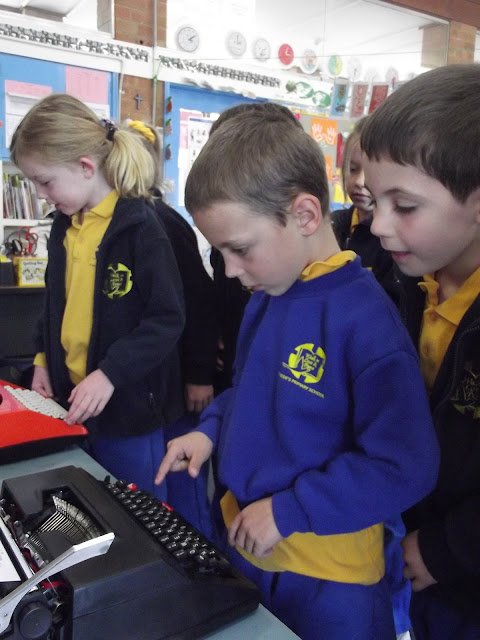 The Royal Scrittore also got a work out. 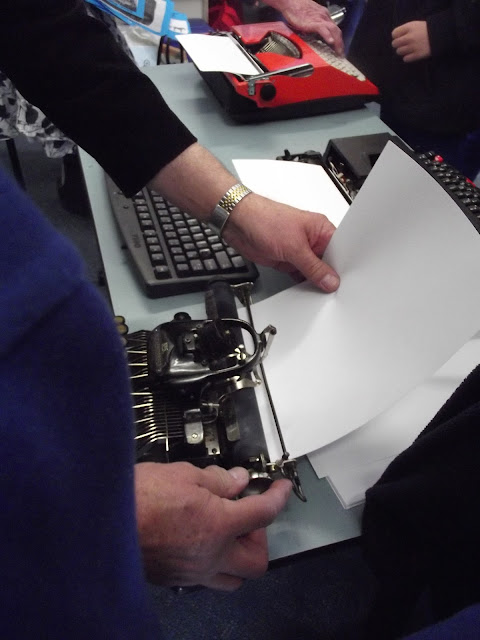 The 1895 Blick 5 is pressed back into action, less than a week after showing off its ongoing abilities at the Canberra Museum and Gallery floor talk. 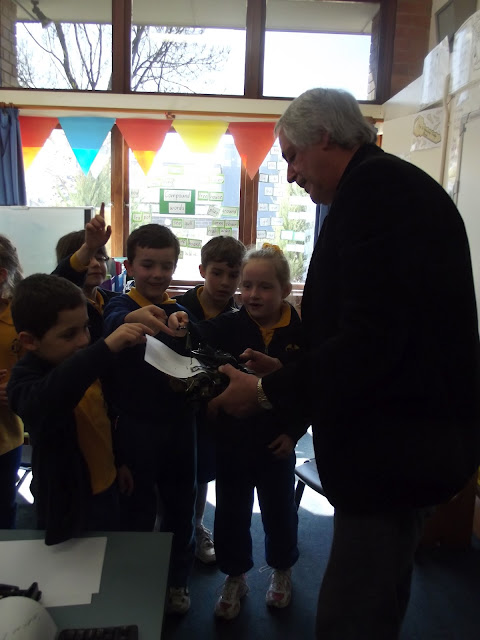 The battle weary Blick is a big attraction 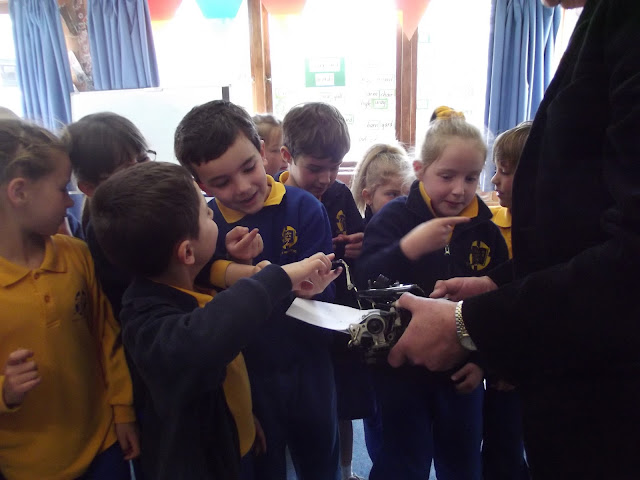 That's where the ink comes from! 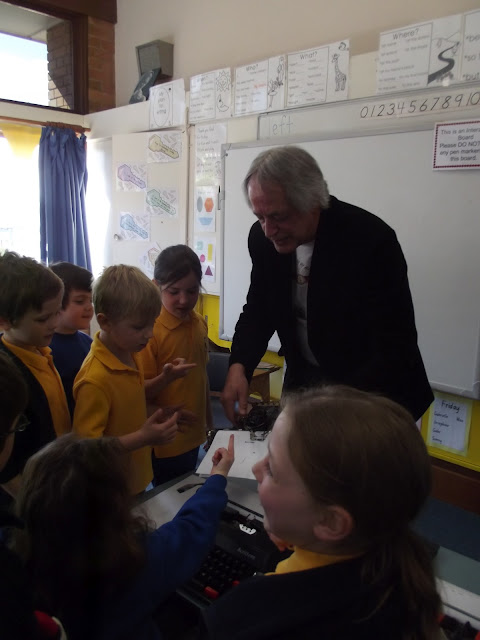 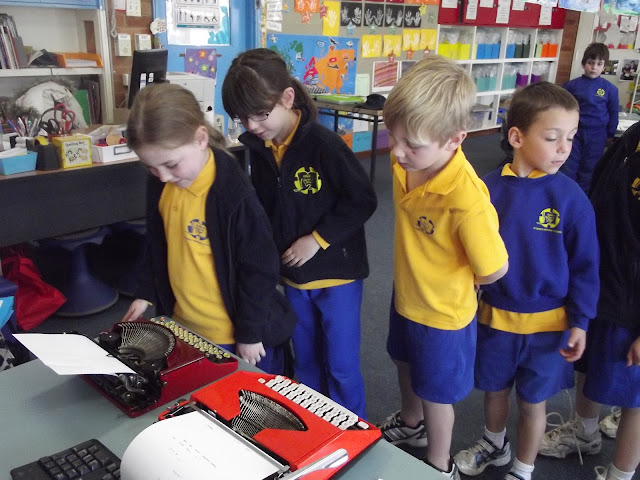 Queueing up to type on the Remington duotone, which proved so much easier to type with.

Posted by Robert Messenger at 18:53

Ha ha ha... I had some kids here on the weekend, and they loved my machines. Every kid that touches them loves them. It's quite magical.

And they wern't your wonky appreciative audience today!

That Blick is a great machine!

Oh this is just the coolest! Thanks for posting. You and the kids have the same fascinated expressions too.

You have really made me want a Blick.

This was a really great post. Looks like you and the kids had a lot of fun.

Robert is clearly prepping for a new career in converting the future generation of Aussie kids to become writers on mechanical typewriters. In time, he will be a folk hero, like that fella that drove the snakes out of Ireland! :D

Delightful! (Though the teacher doesn't look too delighted.)

My 7-year-old niece has requested a purple typewriter for Christmas.

Absolutely fantastic! God, your face when you were explaining the lack of electricity, batteries, ETC required to use a typewriter...hysterical!
So...are you going to donate a typewriter to the classroom, then? Of course, that is only if you happen to have one to spare...

Why did I type wonky?