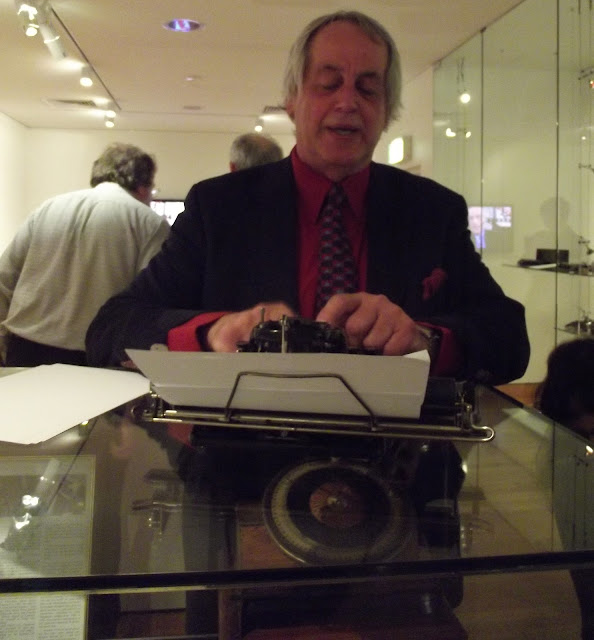 I  had a lot of fun proving that this Blickensderfer No 5,
from Stamford, serial #136231, was still typing beautifully,
with the ink pad in full flow.
And it's 20 years older than Canberra!
The second and last hour-long floor talk to coincide with the typewriter exhibition at the Canberra Museum and Gallery took place today. It was titled: "Mad Men and Typewriters: Works of Wayward Genius Revealed".
The exhibition closes in 11 days' time, on Sunday, September 16, and then we face the problem of where to store the 101 machines that have been on display for the past seven weeks or so. 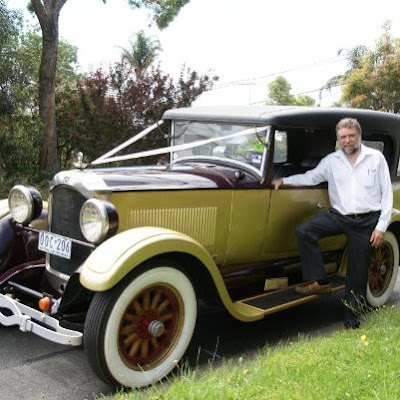 Apart from typewriters, Michael also has a
small collection of beautiful old cars.
I was especially delighted to meet Victorian typewriter collector and former typewriter technician Michael Klein, who flew up from Warragul, 104km east-southeast of Melbourne, to attend the event. Michael is nowadays quality assurance manager of air operations for Thales in Melbourne. 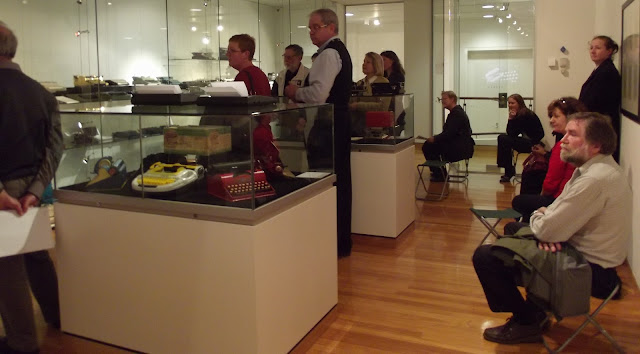 Michael, sitting right, at today's typewriter talk.
I gave Michael my duotone green Porto-Rite portable in recognition of his efforts in getting here just for my talk. It will now take its place beside another Sears Roebuck Remington typewriter product, the Rem-Blick that I sold him some years ago.
Michael and I enjoyed an couple of beers afterwards in the historic Hotel Kurrajong, as Michael regaled me with some wonderful stories about his days working with various brands of typewriter, including Remington and IBM. I just hope he sits down one day and writes about all his marvellous memories, for it would be a very readable document. There is writing in the blood: Michael's brother is a racing historian and his mother is a children's book author. 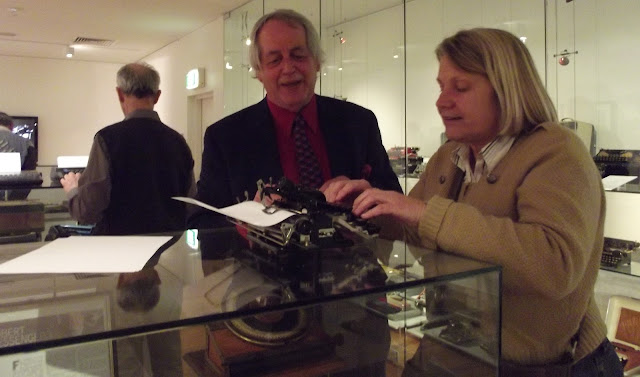 This social historian was VERY keen to type on a Blick. A document forensic scientist (back to camera) told the story of how a criminal was once caught out - even though he had gone to the trouble of typing his note with a toy typewriter!
There's no more pleasant way to spend a spring afternoon in Canberra than by talking typewriters with a man who worked in the industry. Remington's ears would have been burning! But Facit left a very favourable impression.
Anyway, here are some more images from, today's talk: 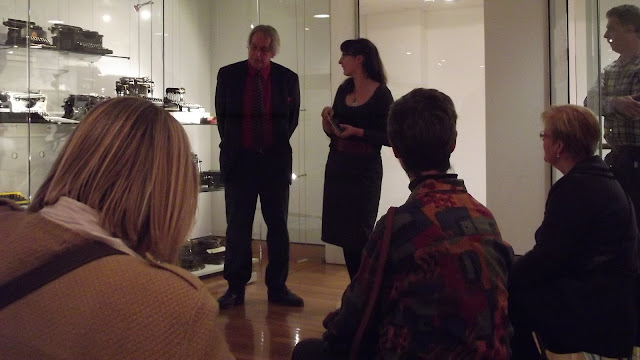 Standing room only - at least for the introductions! 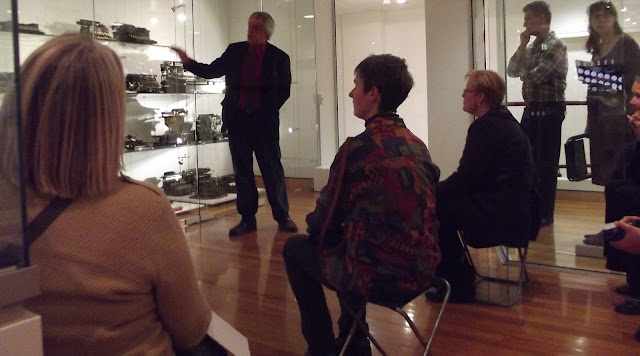 "John Jonathan Pratt was in Alabama and the patents office was in Washington, so ..." 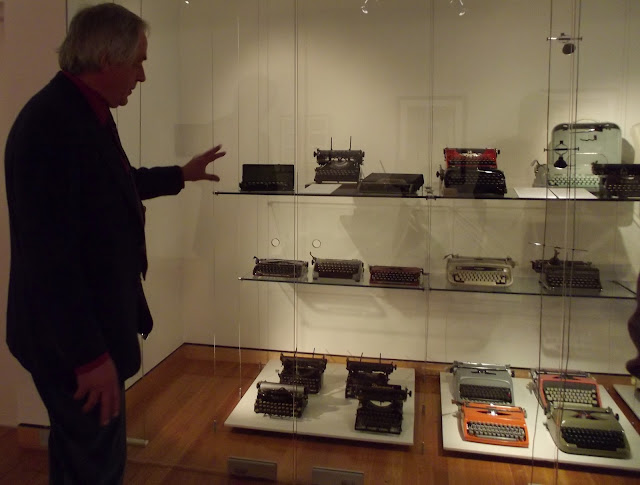 "The Lives of Others has the best punchline of any movie I've ever seen, notwithstanding The Professionals." 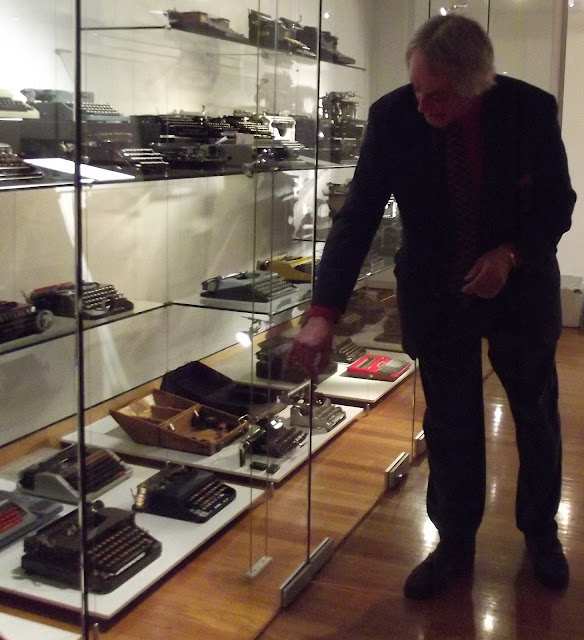 "See the little coloured animals on the keyboard?" 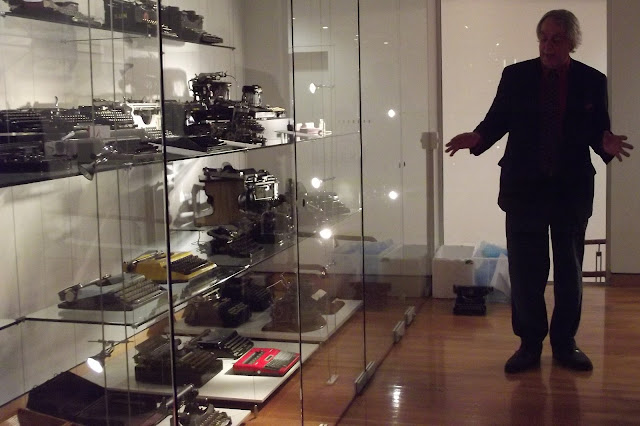 "Anyone got a large spare room I can put all these typewriters in?" 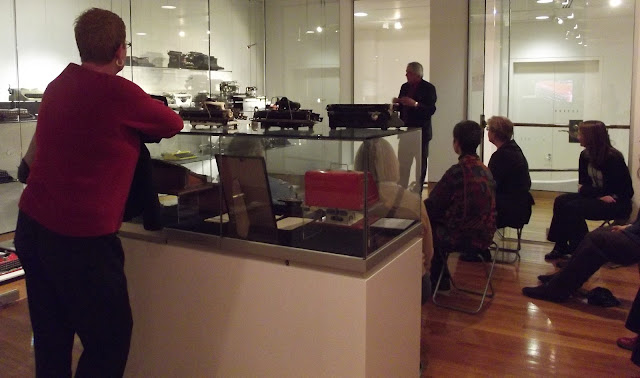 "Poor old Franz Xaver Wagner got ripped off ... but what about James Bartlett Hammond being put in an asylum for two years?" 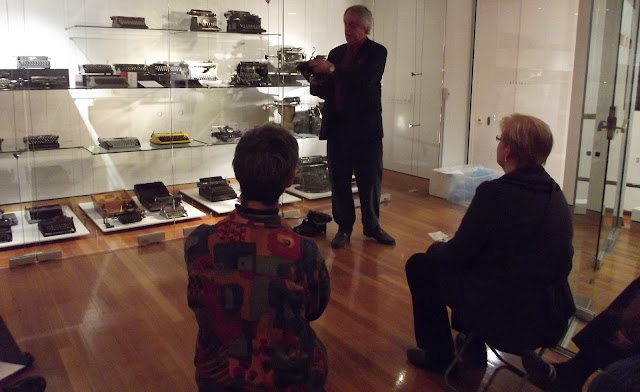 "Let me tell you about this wonderful Blickensderfer 5". 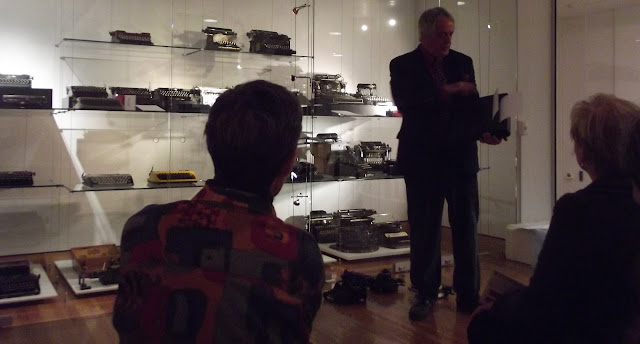 "Modern technology ... yawn! Give me a Blick any day!"
Posted by Robert Messenger at 19:22

What a concept -- using a machine that's older than the city where it's located...

Thanks for sharing this.

Robert, I am so looking forward to your giving this talk all around the world, now that you have the time for it. The photos show the situation and your presentation to be exquisite. I hope your talk was recorded.... Thanks once again for all the work you do in bringing together all this information.
== Michael Höhne

I looks like you have most of your audience enthralled there! Excellent!

Too bad Australia isn't closer to the USA... there is just no way I could have made it out to see this right now.

I wish I could have been there for any of the exhibition...especially the first and last talk! Those who attended were very lucky. I will be living vicariously, however, through my soon arriving issue of your book.
Congrats on all the success with the show, Robert. You are living the dream of all of us collectors, you lucky bastard, you.
Cheers!

I wish I were there to see that exhibition. And I would dearly love to try typing on the Blick. I've received your book. Thank you!
~Caroline

I'm glad you were able to recount the stories behind the creation of these bits of industrial art. There are lots of blood, sweat and tears that go into designing and bringing something to market.

What a wonderful chance to share what you love. I too wish I could have been there. Wonderful work, Robert.

I wish I could have seen it, but I am very thankful for the booklet I received in the mail today. Very cool indeed. I had a lot of fun just paging through it and am extremely happy with it. Thanks for signing it. Makes a great addition to my little typewriter bookshelf (mostly owner's manuals).

If you still need to get rid of any pf those 101 typewriters...I'm right here and happy to help!!!

If you're still looking for somewhere to put the 101 typewriters (unlikely)...I'm here and willing to help!