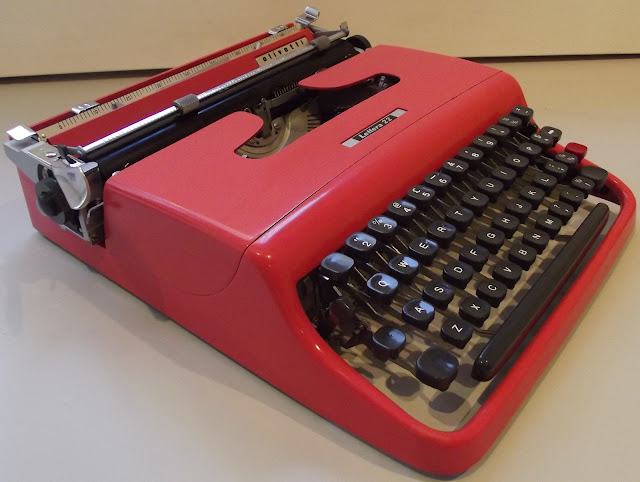 I received a rather unfriendly anonymous comment the other day, after my latest eBay typewriter listings post. My policy is not to respond to jibes from people who can't find the intestinal fortitude to come out from under a cloak of anonymity. My name is on this blog, loud and clear. Anyone who wants to criticise will first need to summons the courage to identify themselves. Otherwise, it goes straight on the spike, as they say in the newspaper business. 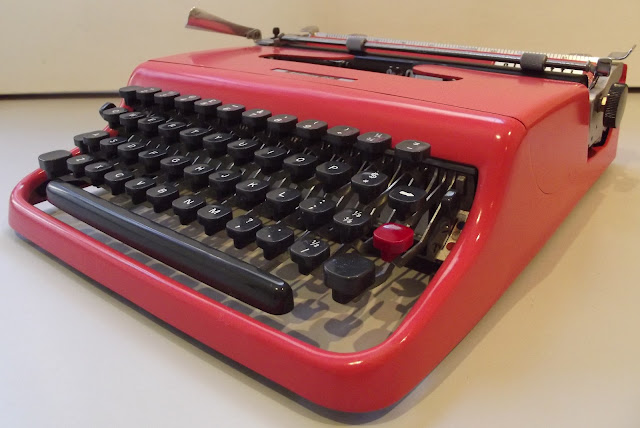 Anyway, the thrust of the comment misrepresented me, suggesting I was using that post to spruik my credentials as a typewriter salesman. I had made the mistake of expressing my thoughts out loud, believing the extent of my audience were Typospherian friends who understood I was a man with far, far too many typewriters and no job (ergo, no income). 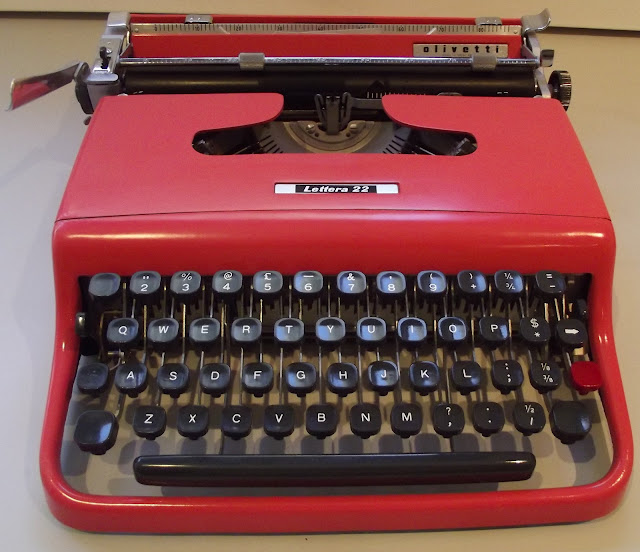 One of my sons is also unemployed, and if by chance I do start selling typewriters online, it will be in partnership with him, in an honest-to-goodness enterprise purely aimed at keeping a roof over both of our heads (and my typewriters). But if I do start selling typewriters, I will only do so when I feel the time is right for me. And if and when I do, I will quite shamelessly spruik it here. But I still fear the major drawback is shipping typewriters, which is fraught with dangers, as I was yet again reminded only this week; much better just to hand a typewriter over to the buyer. 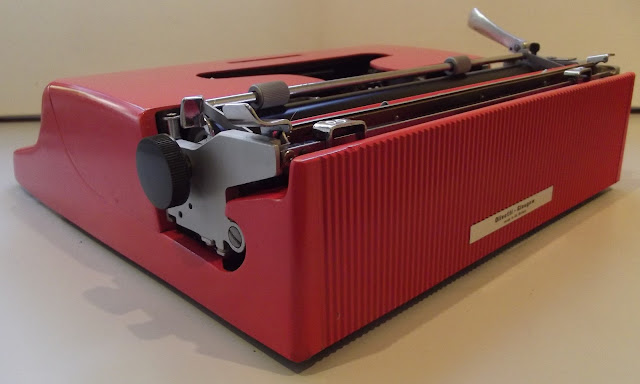 As it turns out, I have made a start, about a fortnight ago, selling this salmon-coloured Olivetti Lettera 22 for $80 (which is hardly profit-making! It almost certainly doesn't cover costs). It's to be a 14th birthday gift for a Canberra lass from her doting father. This man had researched current prices in great detail. He inspected the machine at close range and tested it. He knew he was getting a good deal, which included a case in good condition, dust cover and a manual. Contrary to what many people who email me think, I am no typewriter evaluer. 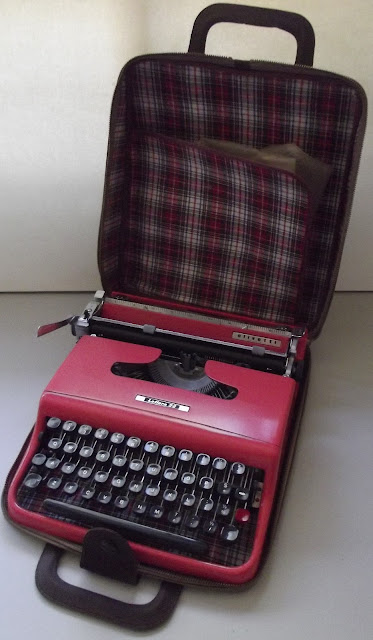 Indeed, and let's face it, I am no salesman either, no businessman. Never have been, never will be. I know nothing about driving a hard bargain, it's not in my nature (sadly or otherwise). Many - but fortunately far from all - the sellers who list typewriters on eBay are profiteering. That's what they do and some of them are good at it. Good luck to them. In the meantime, in the past few months, my ratio of (often very valuable) gifted typewriters to sold typewriters is at least 20 or 30 to one (that is, one sold). 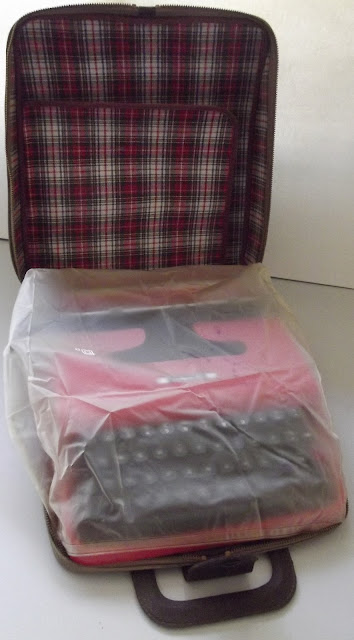 The other day I bought an Adler 7 in absolutely magnificent working condition. Total cost, including organising a courier myself, at less than half the listed cost, was under $200. I was following the advice given to me many years ago by Paul Robert, who said he kept a small collection and when a better model than the one he already owned came up for sale, he bought the better one and sold the one he had. (Following Paul's good advice, that is, except for keeping a small collection!) 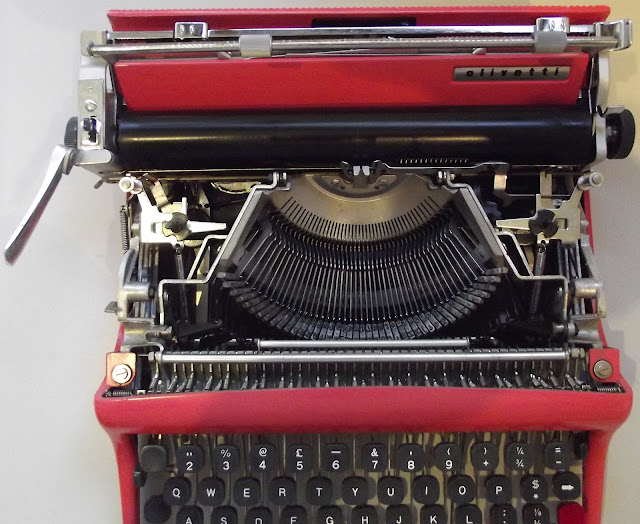 My plan was to sell the Adler 7 I had (also in excellent working order) to offset the cost of the superior one. But when it came to it, noting the decals were worn, and one of two other very minor problems, I couldn't do it. It wasn't worth it. I'll now give it away to a friend. 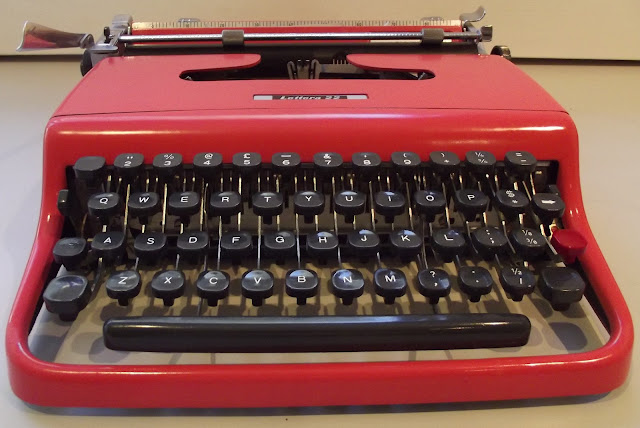 Still, selling one typewriter is a small start in the right direction. There are many more that must go. 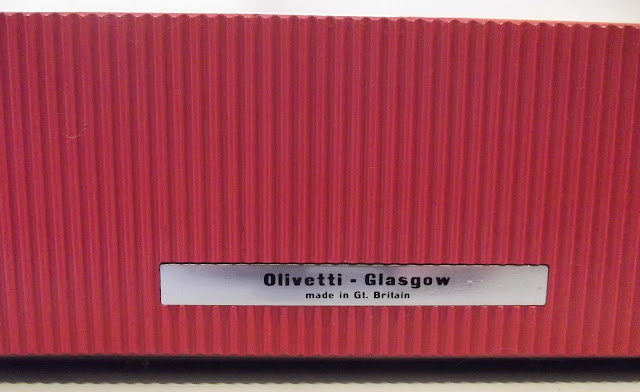 Made in Scotland, where the natives are reputed to be frugal.
Posted by Robert Messenger at 16:26

One small step for mankind, but a big step for you, a typewriter COLLECTOR. Courage and carry on.

And the capcha that I had to fill out had the number 22. Awesome.

Robert, this is by far the most beautiful Olivetti I have ever seen in my life. I am, again, unabashedly jealous. The inside of the case is really special, what's the outside look like?

Send me some courage, Georg :)
Thanks, Mark. Karma, maybe?
Hi JP H - there are still 2-3 of these pink 22s still to sell, a couple with the original round black keytops. The case is a fawn vinyl with a broad dark brown "leather" band down the middle. Quite nice.

I think I saw that Olivetti while I was there. Great looking machine! The person will be very happy.

I missed the person's comment on your page, but it sounds like - yet another case of keyboard commando-ism. I wish some people would think a bit harder, and perhaps take the time before hitting send. Oh, the instantaneousness of the post typewriter world.

Thanks Scott. I deleted the comment. I suspect my critic in his/her haste to condemn overlooked the fact that this is my blog, not some forum. Of course, as such, I'll say what I chose on it, including spruiking my own typewriter sales!

I hope, when you put the comment on the spike, you imagined it were the actual commenter , and you put him/her on lower end first!

Great idea, Pearly Queen. Yes, I felt like doing that. BTW, old "Dieter" is married, but I'll keep an eye out for a single one.

Great idea, Pearly Queen. Yes, I felt like doing that. BTW, old "Dieter" is married, but I'll keep an eye out for a single one.

I think we are very alike in this. I have great difficulty selling something for more than I would pay for it. I need a selling agent to handle it for me. and thanks for "spruik" - that's a new one on me.

With all those typewriters in fresh colours here, I feel like winter somehow has been skipped and spring is here already!
Also, an Adler 7 for $200? I feel like I should've bid for the one that was on ricardo for under $100 last week...

A very attractive machine. I have sold a few typewriters myself, but just ones I had two of or didn't quite like. There are a few more I could sell, but I haven't gotten around to it.

Shipping from AU would be ridiculous, but I would love to look through the machines you plan on selling. Who knows...perhaps something will be neat enough to warrant the shipping price tag.

Good luck with all of it, Robert. I am still waiting to hear how the Funkomatic deal went sour...and I got so excited when I read the title for this post. Pony up!

my brother in law recently retired from Maersk. i wonder if i could prevail upon him to swing a container and ship a few back to blighty :-) seriously, i don't think ebay will realise the true value of any of your fine machines. i reckon you could easily set up a small shop between you - a typewriter boutique - Canberra Typewriter Exchange. if anyone can become the typewriter wizard of oz, it is you.

I wonder if we could arrange a container to Seattle/Tacoma or LA port.

Wow, I can just imagine what I'd find in your future ebay listings. How I wish I lived in Australia.

Every success to this endeavor, Robert!

Robert, I'll go ahead and send you an email.