On This Day in Typewriter History: Honey, Lee Shrunk the Typewriter 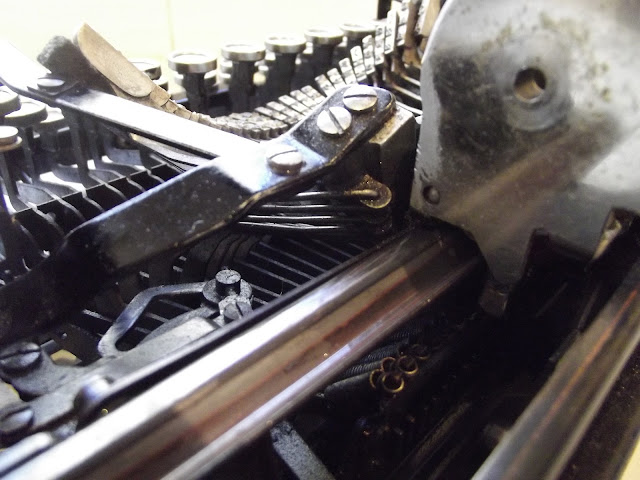 PART 128
There shall never come a day when I look at a Blick 5 and not be utterly astonished by the sheer audacity of George Blickensderfer’s creation.  Nor will I ever gaze at a Corona 3 and fail to be filled with the utmost admiration for the pioneering work of Franklin (Frank) Sebastian Rose and Otto Petermann. 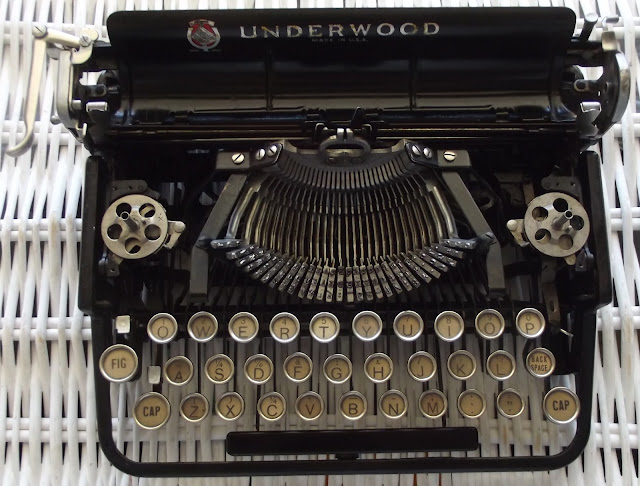 But the one typewriter that succeeds in completely mesmerising me, day after day  after day for years on end, is Lee Burridge’s Underwood 3. 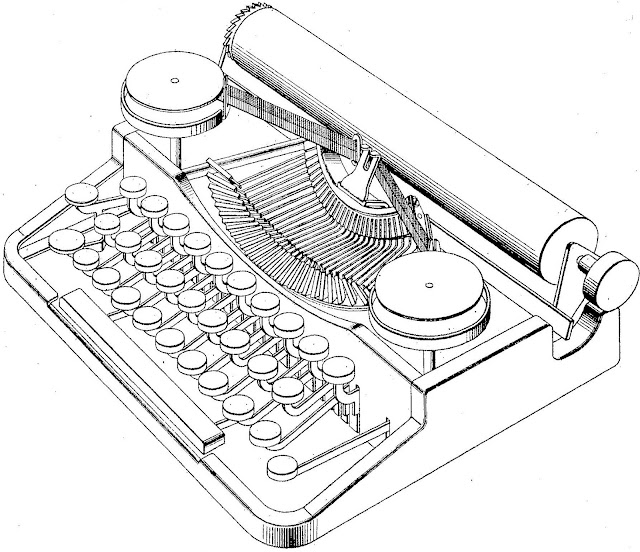 I just absolutely adore this typewriter. Always have. Always will. 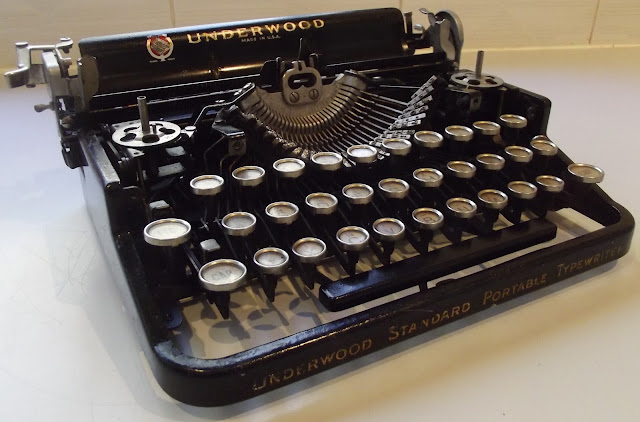 I have often described this machine as a work of genius in engineering in miniature. How could one man pack so much into so little a typewriter – all of 9¾ inches wide, 8 inches deep and 3½ inches high (sans the boots)? In its little case, it weighs 9¾ lb,  and the case measures 10in wide, 12½in long and 5¼in high in high. It's a fully-fledged keyboard writing machine inside a shoebox. It’s a tiny miracle among typewriters. 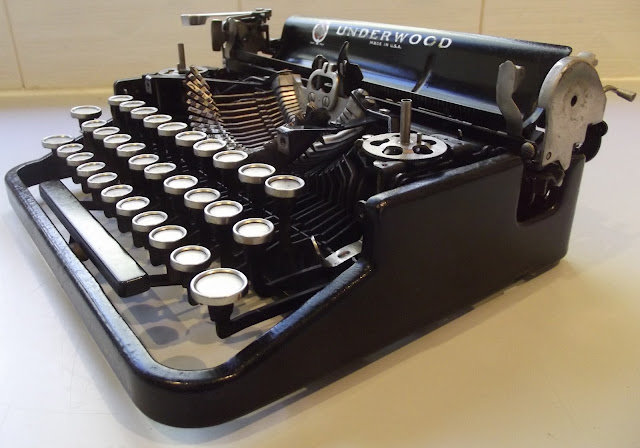 On this day I get the chance to inspect Burridge’s design masterpiece at even closer range – having stripped it of a platen, platen knob, frontispiece and ribbon spool supports. I’m afraid I couldn’t get any more off it, to fully expose the inner workings, to compare the actualisation with Burridge’s incredible visualisation. 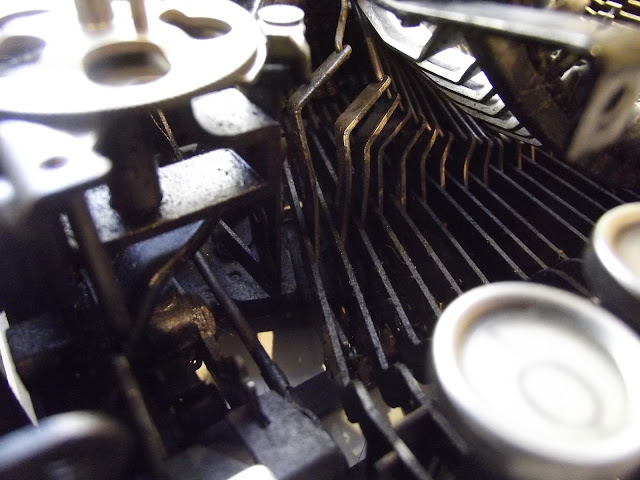 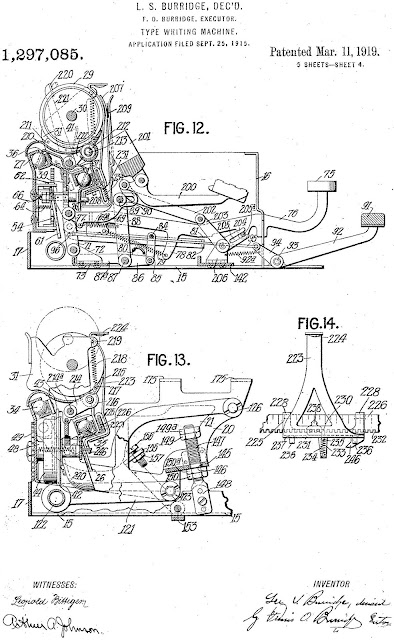 But we can dwell all we like on the drawings in the patent applications and still marvel. For it was on this day in 1915 that Burridge’s brother, Francis Ogden Burridge, applied for the patent, assigning the late Lee’s last work to Underwood, as the executor of Lee’s estate. 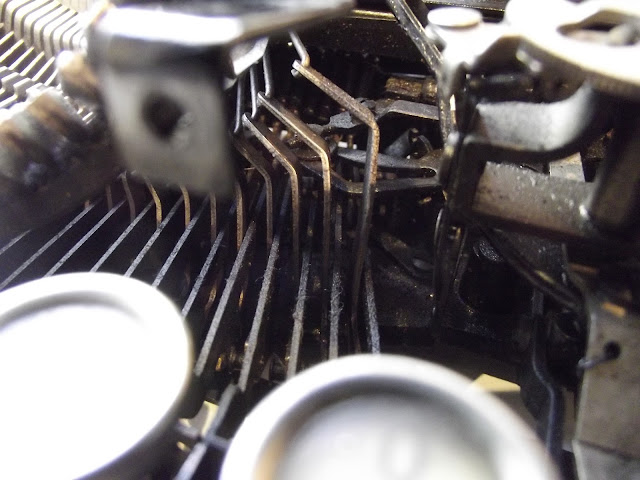 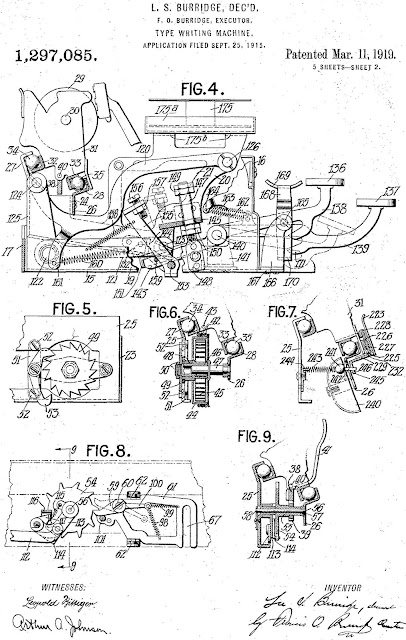 Yes, Lee Spear Burridge had died in New York City, aged 54, on May 4, 1915, more than four months before the application for this patent was made. Almost three years later, in July 1918, Frank Burridge also applied for a patent for Lee’s design for the machine’s frame. The patent for the frame was issued on January 28, 1919, and for the workings on March 11, 1919. The Underwood 3 went into production in November that same year. 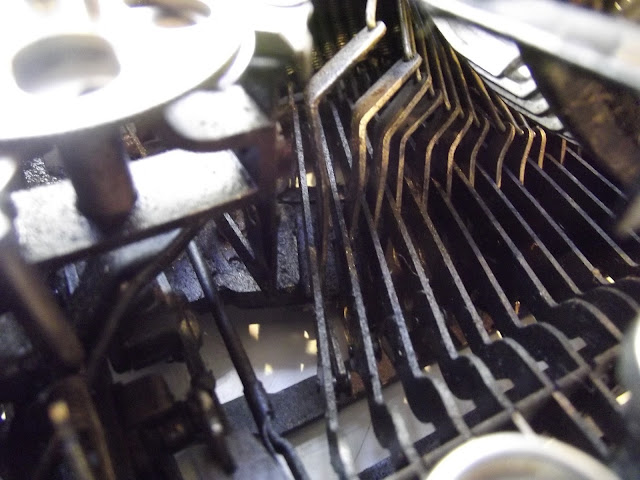 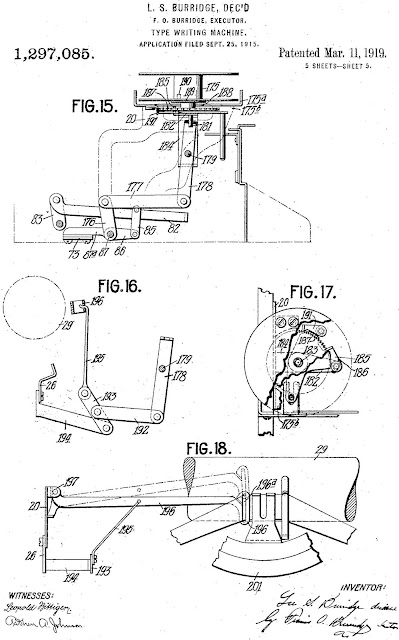 I almost weep to think Lee Burridge never lived to see his final work complete. Quite why it took so long between Burridge designing the machine and the Underwood 3 being made is probably one of those mysteries we may never be able to solve. The really cruel part is that Underwood never gave Burridge the credit he deserved when it did eventually start manufacturing his machine. 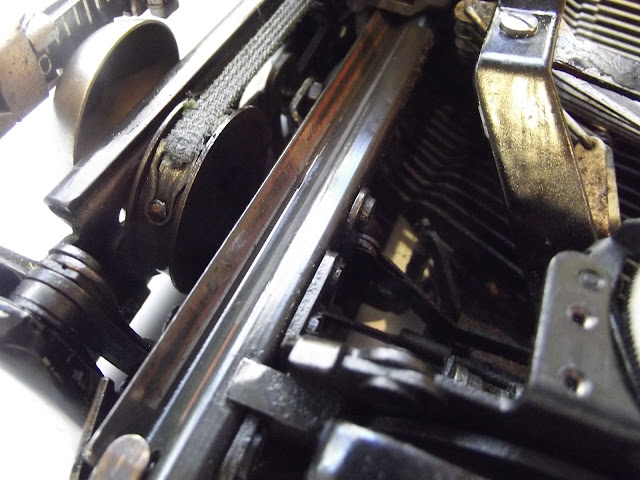 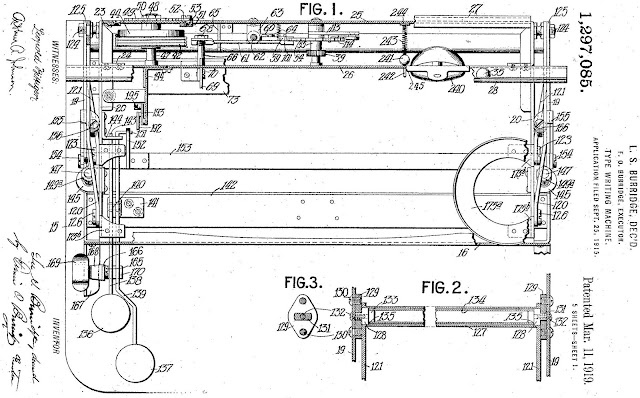 I first looked at the Burridge Underwood 3 designs on this blog on May 7 last year. 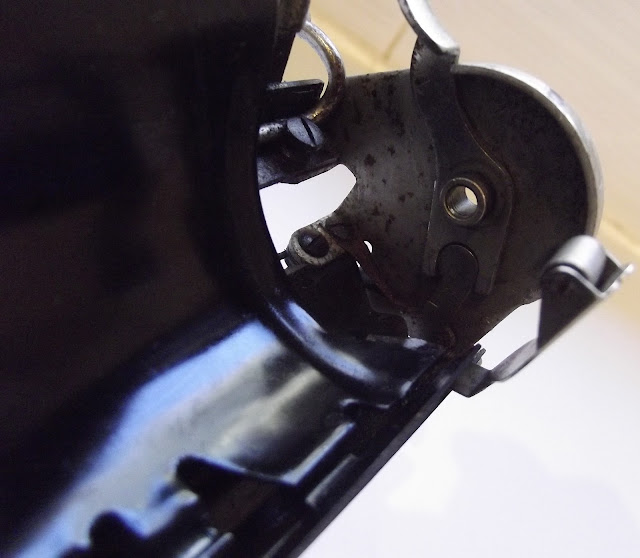 I love the simplicity of this
carriage release lever 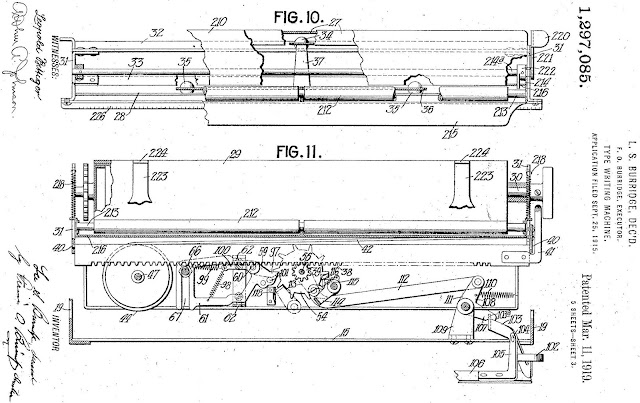 Lee Spear Burridge was born in Paris, France, on September 22, 1861, the son of dentist Levi Spear Burridge and Emma Frances (nee Ogden) Burridge. He was educated at Tunbridge Wells Grammar School, south-east of London, England, and moved to New York in 1878. 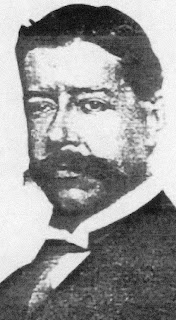 He and Frank Burridge established the Sun Typewriter Company in 1887, having already patented an index typewriter two years earlier. Until it became apparent he had designed the Underwood 3, Lee Burridge was best remembered for the 1901 No 2 Sun typewriter, which at the time was advertised as "the only standard typewriter suitable for travellers". With the success of the Sun keyboard machine, Lee Burridge left an estate appraised at $91,000 when he died in May 1915. Unmarried, Lee left this small fortune, and his unassigned typewriter patents, to his brother Frank. 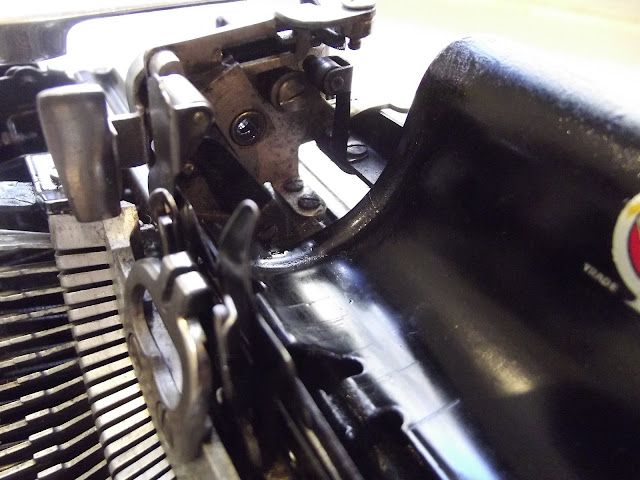 Francis Ogden Burridge was born in Italy in late 1858, and was more than two years older than Lee.
With the Underwood 3 patent rights left to him by Lee, Frank became a millionaire, and lived accordingly. When he died, in New York City on September 25, 1930, newspaper reports said he had been “fond of society and entertained lavishly” at his apartment on West 57th Street. He left $50,000 to a “friend”, a Miss Helen Gilmore, and the rest of his estate to a cousin, Herbert C.Smyth (some reports say his name was Albert Smyth).

Frank’s initials may have been “FOB”, but according to a Philadelphia woman who claimed to be his widow, he was a right “SOB”. 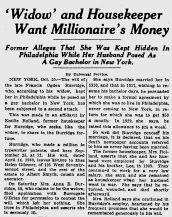 Reports of Frank’s passing stated he, like Lee before him, had died unmarried. But a Mrs Anna B.Burridge, then 58, of Philadelphia, made a claim against Frank’s will, saying she had married Frank in 1910 but that in 1917 he had “banished her from New York” and “compelled her to live incognito for 20 years” so that he could live the life of a “gay bachelor” in the Big Apple. While she was in Philadelphia, Frank paid Anna $50 a month until 1929, when he increased her allowance to $25 a week. But at the time of the claim, she was destitute and dying. After Anna’s claim, the former housekeeper of Lee and Frank Burridge, Emillie Rolland, also joined the court action against Frank’s will. 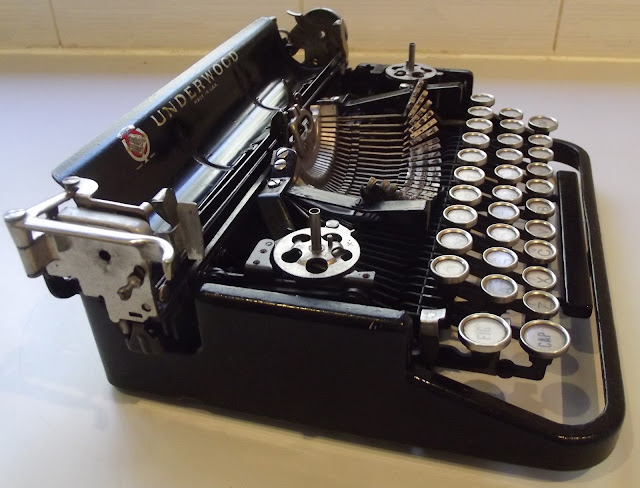 The machine in these images, by the way, has the serial number 197,578, meaning it was one of the last of the 212,500 of these great typewriters ever made.
Posted by Robert Messenger at 14:59

This typewriter really is a little gem! One of my favorites too.

I'm very impressed with this design, too. It's really compact and easy to use. And very sturdy. I have one with a seriously damaged platen and pressure rolls; while I find a shop that still does platen resurfacing in Mexico, I fixed it by simply wrapping a thick piece of paper around the platen and taping it in place. Works nicely with that temporary fix.

That is a simply adorable little machine! I love the first, small portables; the first tiny titans in a world of behemoths. They certainly paved the way for other small machines!

As always, thank you for posting this. I learn so much from your blog!