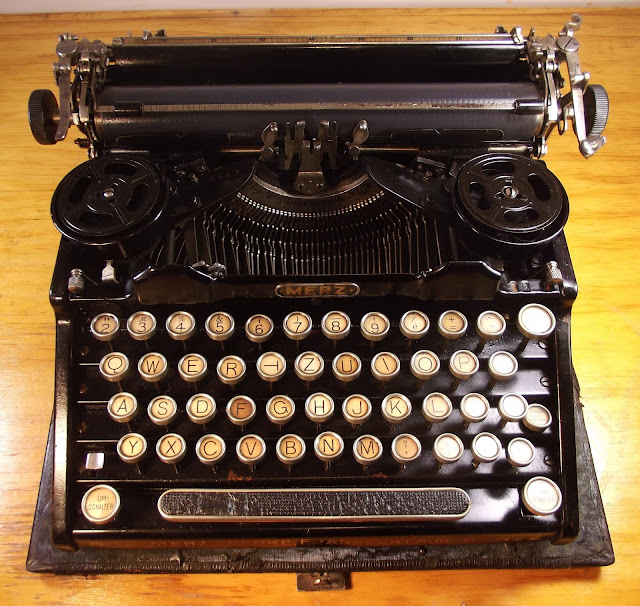 I prefer the look with the name panel in the upright position.
Ah well, life goes on. Upon hearing my news this morning, my old friend Frank Neate wrote, "The most appropriate Maori saying is Ka whiti te ra ano - the sun will shine again."
I was indeed hoping it would do so, and that I'd be cheered up by the arrival of this Merz typewriter from Italy. OK, so it's not the full-blown thing. My model lacks the Merz's spectacular paper support, and the left carriage lever has lost part of its handle.  But I still like it. It has given me something to divert my mind from other matters. 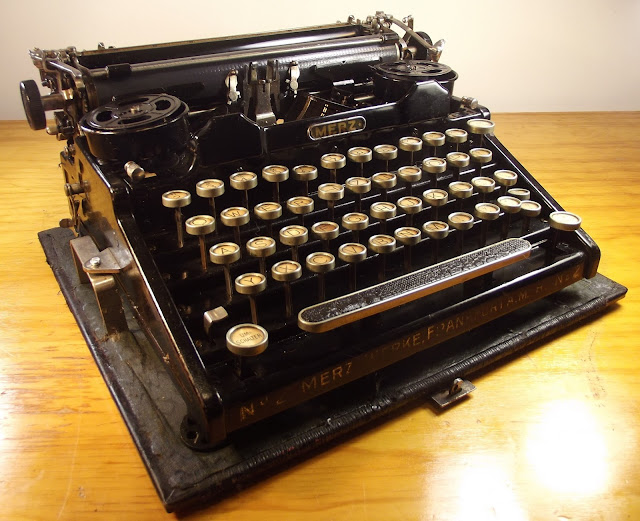 Below, how the "full-blown" Merz looks, with the fantastic paper support
- from the Georg Sommeregger Collection 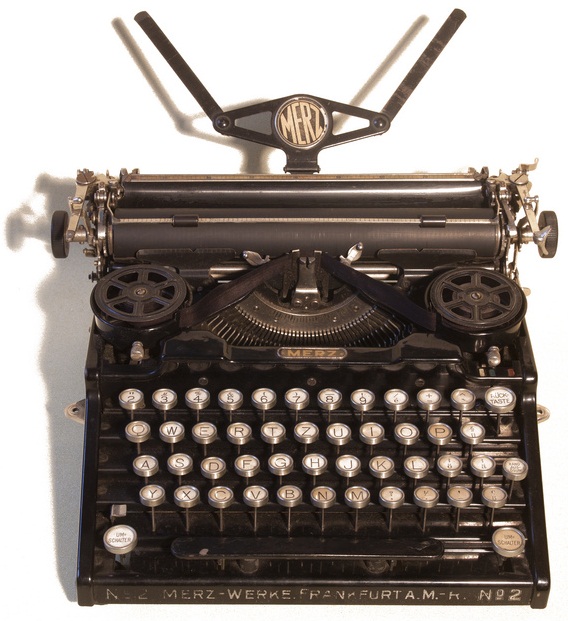 So the Merz has succeeded in lifting my spirits, at least a little. I'm being quite positive about it. I haven't managed to get it working yet, but I feel absolutely sure I will. There is a ton of zing in the carriage, always a very good sign, with the steel drawband taut and intact and the mainspring obviously still full of life.
But the keys are very sluggish. Comparing the underside of my machine with Georg Sommeregger's, I note the aluminium bar guiding the type rods on mine seems to be disintegrating, which is not a good sign and may well be the cause of the typebars not functionally as they should. We'll see ... 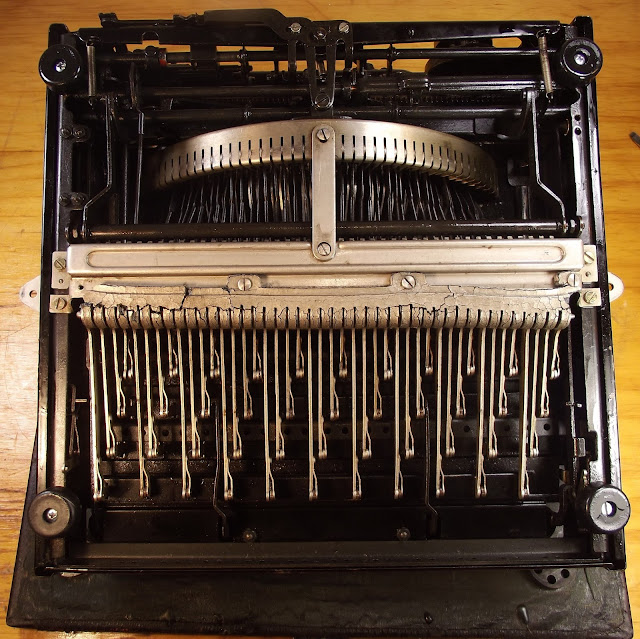 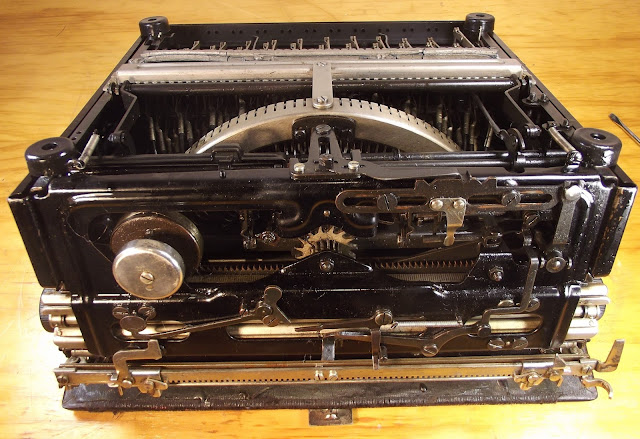 The underside on my machine 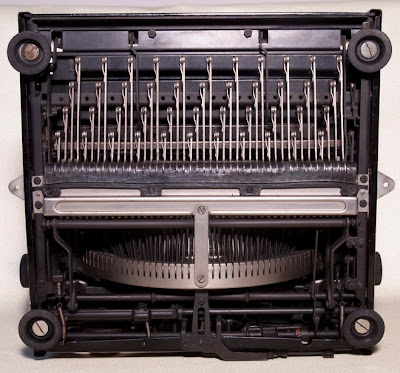 The underside of Georg Sommeregger's Merz
Adolf Fritz Schauss, of Oberursel outside Frankfurt-on-Main, designed this machine in 1924 and its successor two years later, and they were made by Merz Werke of Frankfurt, with production starting in 1926.
Mine is a Model 2 with the serial number of 5547, meaning it was made just after Georg's (#5236). Georg dates his Merz as a 1927 model and I would say mine was made that year or in 1928 at the latest. A new serial numbering system appears to have been introduced for that latter year. 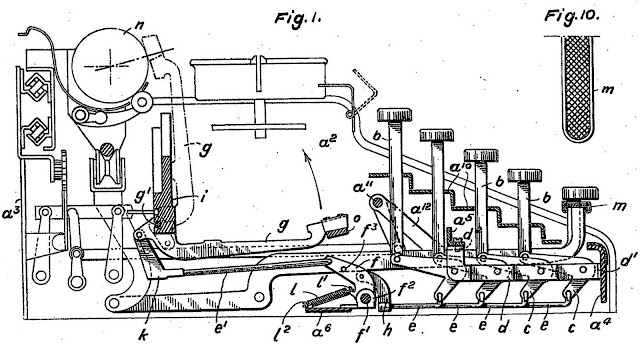 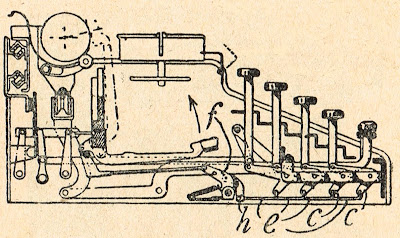 As the first design appeared in Ernst Martin's book 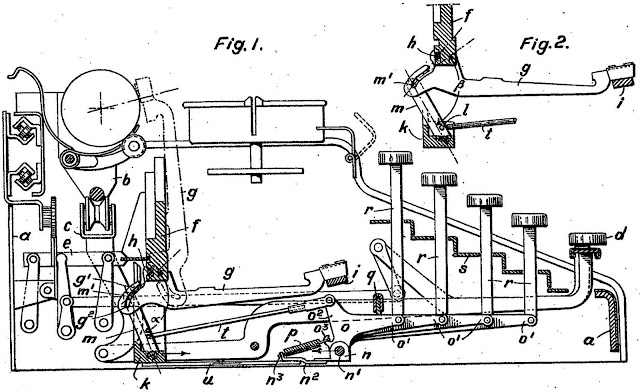 Schauss's second, 1926 design
The Merz has been described as a "robust portable typewriter", but whether it was intended to be just a small if rather heavy portable or alternatively to be used as very small standard seems to be in some conjecture.  I find it a little heavy for a portable, but then the frame is rolled steel made from the Siemens-Martin open-hearth process. 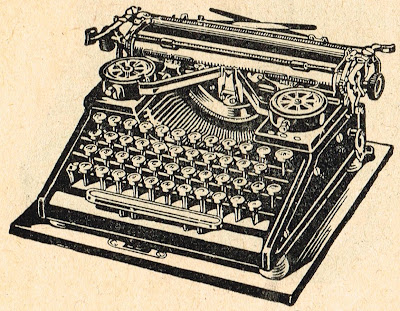 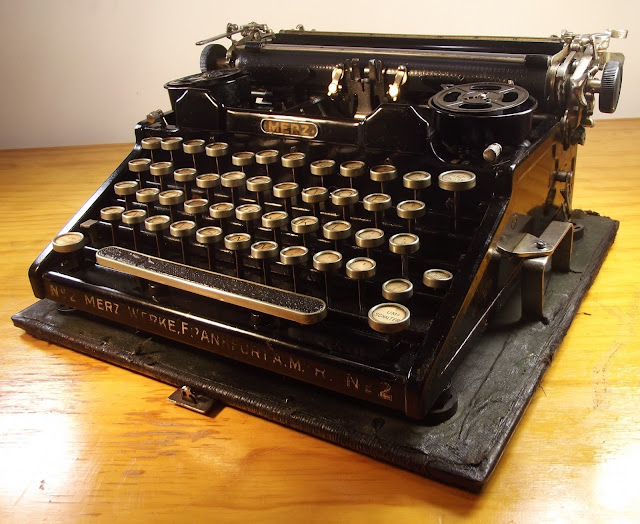 Ernst Martin called it a portable, albeit a "strongly-built" one. Later historians have said its salient "new" feature was "the absence of the usual tension springs, creating a lighter touch and [enabling] a higher writing speed". 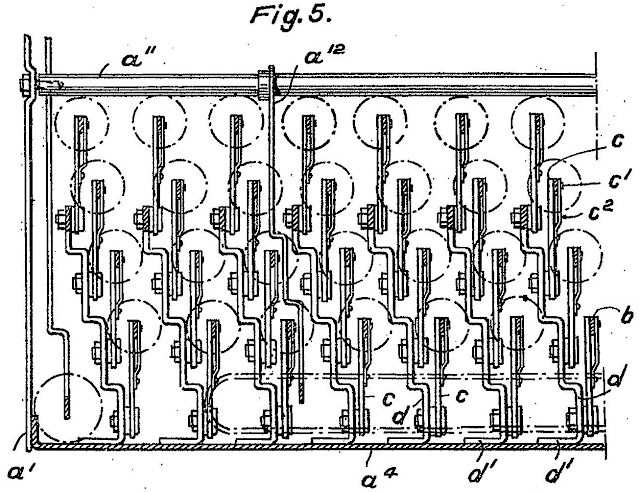 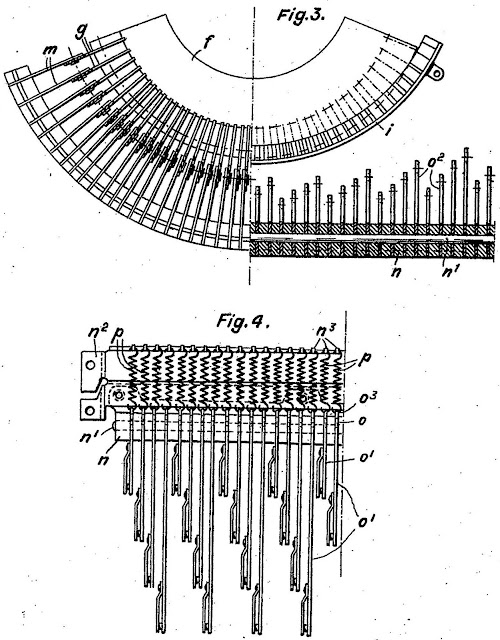 The "improved' design of 1926
In the specifications of his first design, however, Schauss himself said that while the Merz's outside dimensions correspond "to the known small travelling or portable typewriters", "its working corresponds to a complete typewriter". 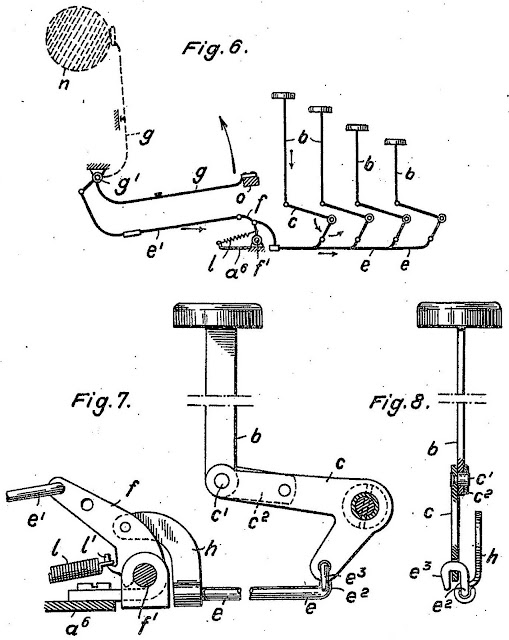 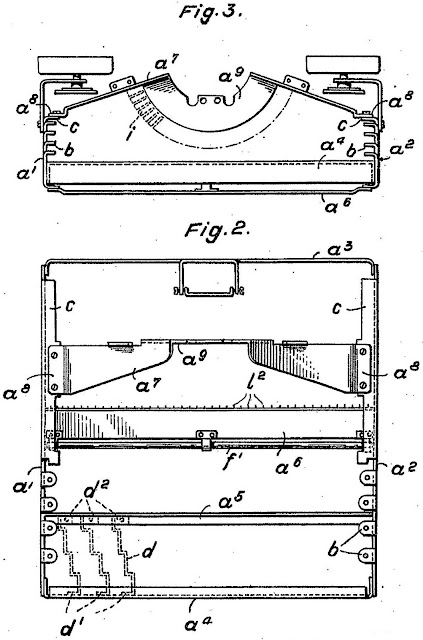 The original decision
Schauss wrote:
"The object ... is to construct a small portable typewriter which, whilst retaining the simple carriage return and the advantages of the known office type  of machine, has a complete keyboard and is very strong and stable in design without departing from the usual dimensions of the known travelling machines. The known forms of portable typewriters differ considerably in construction and in arrangement of the keys and typebar mechanism from the larger-sized standard office machines and the typebars could not, for example, be arranged in a vertical bank in front of the roller. In consequence the typebars have been arranged to strike downwards on the roller and the radius levers carrying the type move through an angle greater than 90 degrees. In another form of portable machine, the typebars may occupy one or other of two normal positions for the purpose of reducing the height - one position was occupied when the machine was being transported and the other, higher, position when the machine was in use, whereby the angle of swing of the radius levers carrying the type was reduced when the machine was in use. The large typebar swing of these known forms, in addition to other disadvantages, affects the key touch and the complicated and necessary sensitive setting mechanism increase the prime cost of the machine as well as reduce its stability and durability. According to the present invention, the keyboard is of the normal size, having 44 keys ... and the height and overall sizes are similar to those of the portable type of machine. These results are attained by the peculiar arrangement of the key and typebar mechanism and the suitable method of guiding the carriage with the paper roller. In order to enable the roller to be brought as near as possible to the keyboard, without raising the carriage guide, the typebar bracket is arranged vertically in front of the roller and the radius lever carrying the type is so arranged and operated that it only travels through an angle of about 90 degrees from its position of rest into its printing position. All setting mechanism is dispensed with and the operation is simplified. The weight of the machine ... is thus reduced as compared with other portable machines. It will be readily understood that such a material increase in the number of keys ... renders it necessary to provide a novel type of operating lever mechanism." 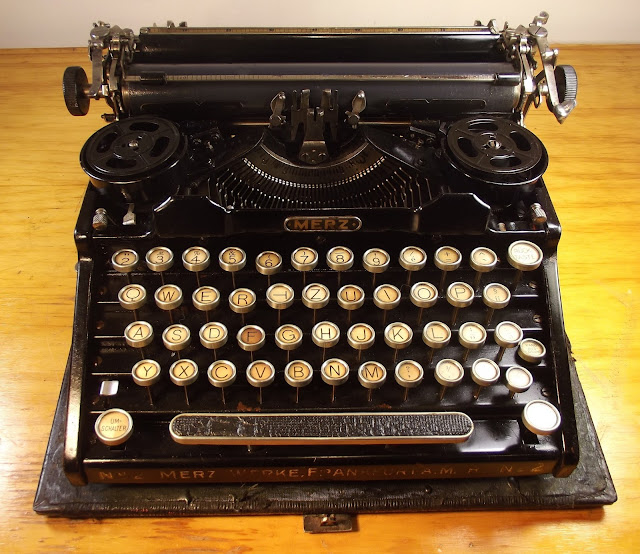 In re-designing the Merz in 1926, Schauss appears to have further lowered its height. 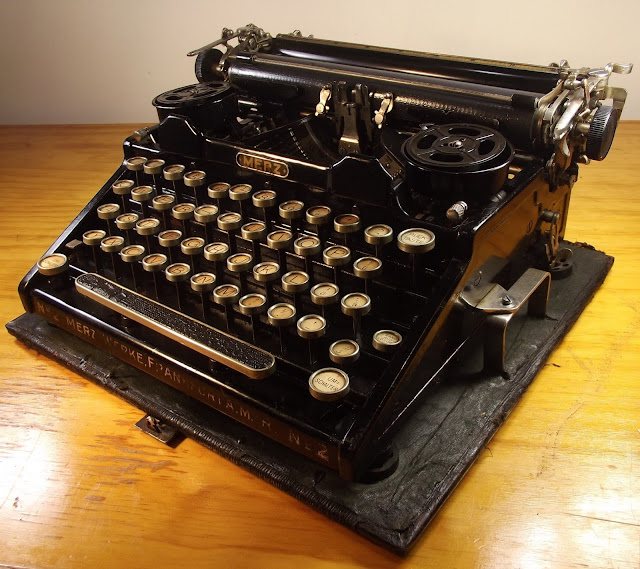 Merz GmbH is an existent company. It was founded to make respirators and driving goggles by Luise Jeanette Caroline Merz and her two sons, Friedrich Karl Julius (Fritz) Merz and Paul Georg Martin Merz, on November 29, 1899. 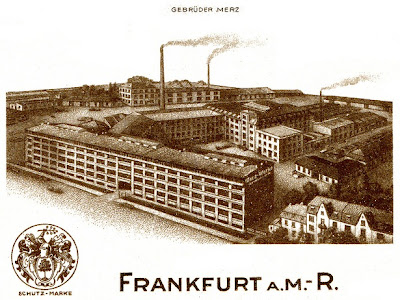 Above, the factory: Georg Sommeregger Collection

Paul died in 1914 but his son, engineer Johann Georg Martin Merz joined the company in 1924, the year Schauss designed this typewriter. 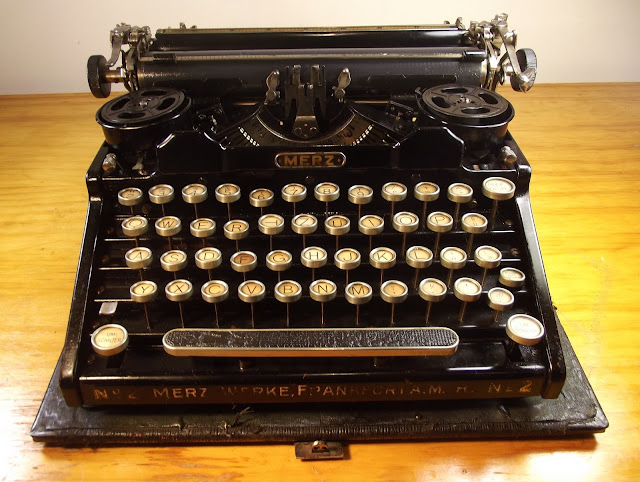 The Merz was were sold as the Concord in France.
Below, with the name plate in the normal, "down" position 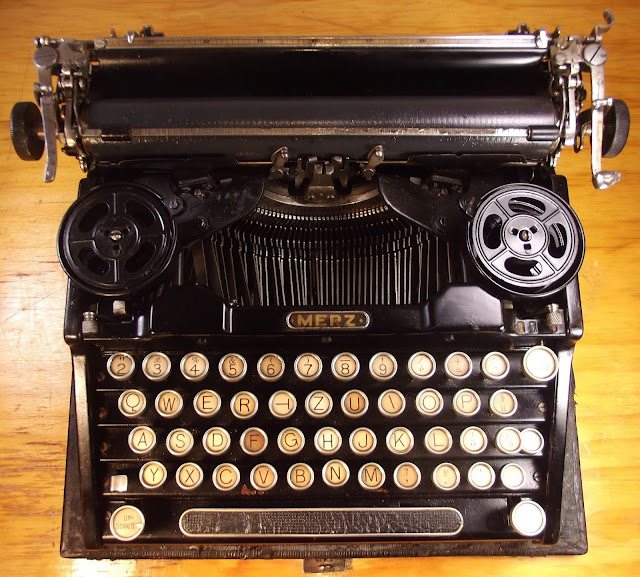 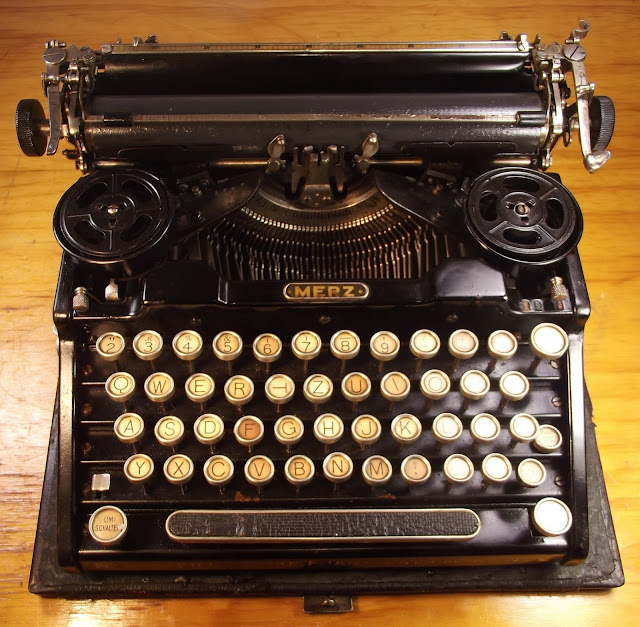 Another excellent perspective of the true beauty of the Merz comes in these images of machines from the Richard Polt Collection: 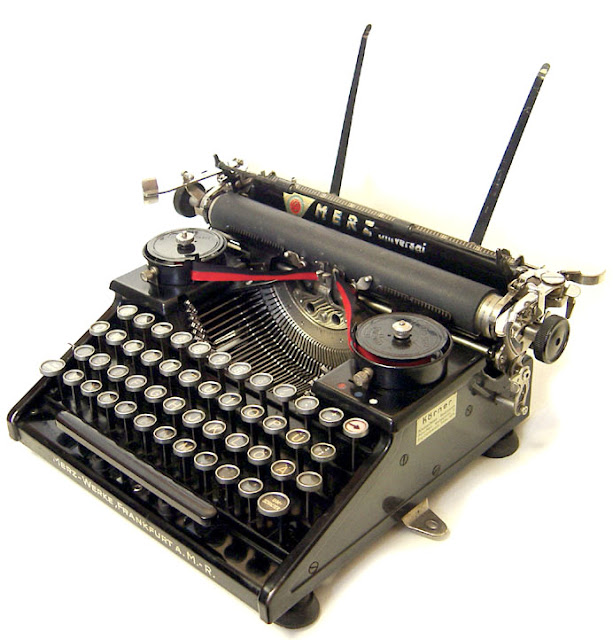 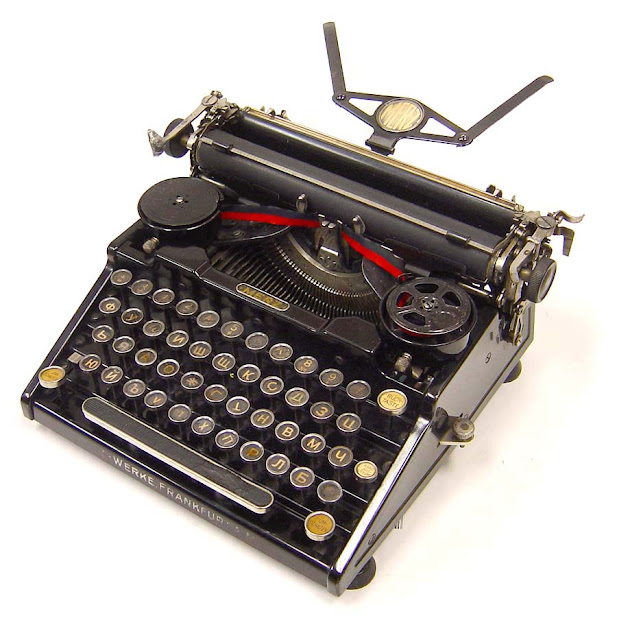 Posted by Robert Messenger at 18:55

There is nothing like having a new machine to diddle with for a few hours to distract the mind. I know the feeling; just walking past my little workshop (on my laundry duty travels) gives me a happiness boost, and when I have a "new" typewriter to unpack, oh the joy as I stick some paper in, poke around in its innards, freeing this and tightening that and hours drift happily by.

Thanks for enlivening my morning with your post; that was an interesting bit where Shauss goes on about the problem solving that goes into designing a portable.

I've long found the Merz interesting. I get the impression that it was designed by obsessive techies. The mechanisms seem robustly engineered, and the symmetry is amazing -- even though it's misleading, because identical-looking levers on left and right may do different things.

The Merz from my former collection (now in Gabe Burbano's collection) which you have marked as a Model 1 is actually a Universal, made after the Model 2.