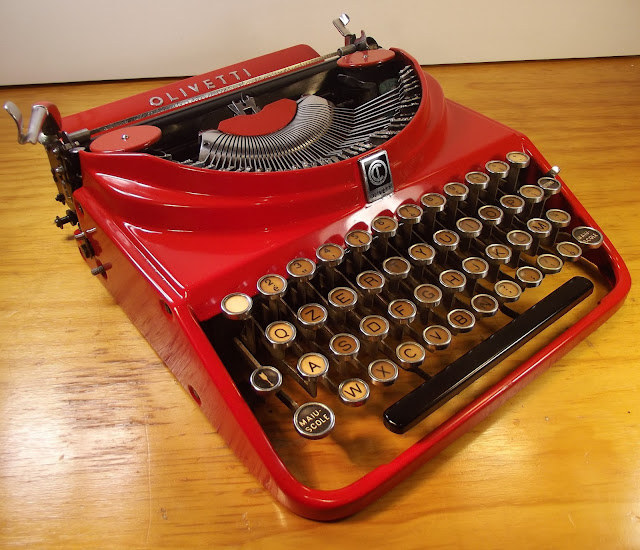 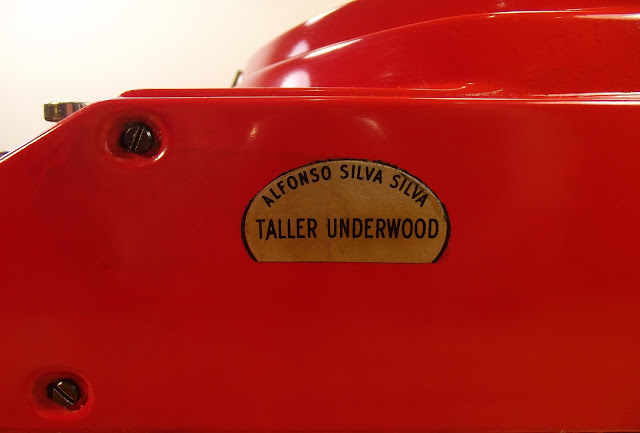 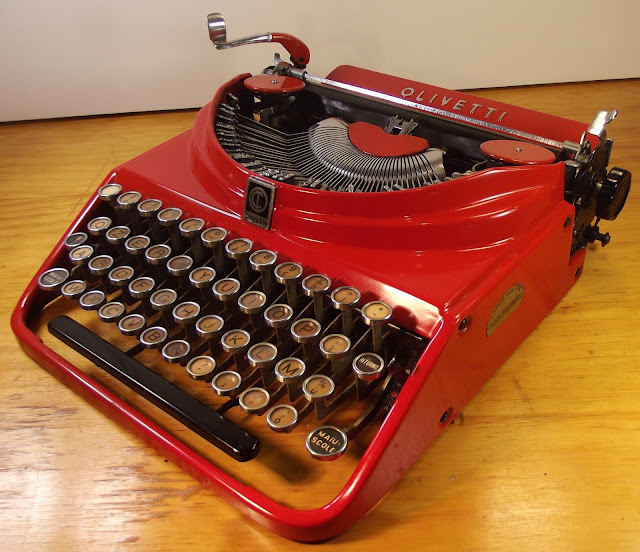 This 1939 Olivetti ICO MP1 was sold by Alfonso Silva Silva of Taller Underwood in Buenos Aires, Argentina. Its serial number is 67210, The model name refers to Ingegnere Camillo Olivetti (ICO) Modello Portatile 1 (MP1). The ICO MP1 went into production in 1932. 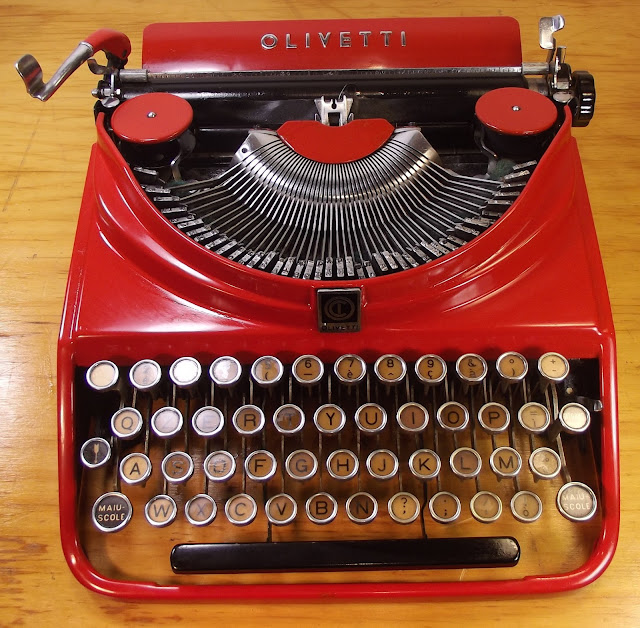 The mask of the ICO MP1 was designed by Aldo Magnelli, of Florence.

Magnelli was not only the brother of Alberto Magnelli (1888-1971), a painter who was a significant figure in the post-war Concrete art movement, but a protégé of Charles-Édouard Jeanneret-Gris, better known as Le Corbusier (1887-1965), the Swiss-born (La Chaux-de-Fonds) architect, designer, painter, urban planner, writer and one of the pioneers of what is now called modern architecture. 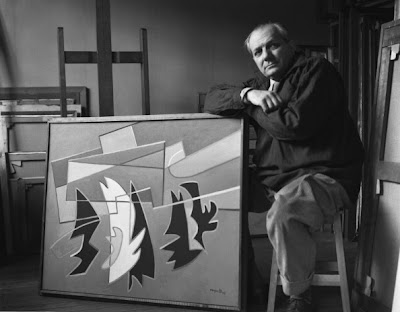 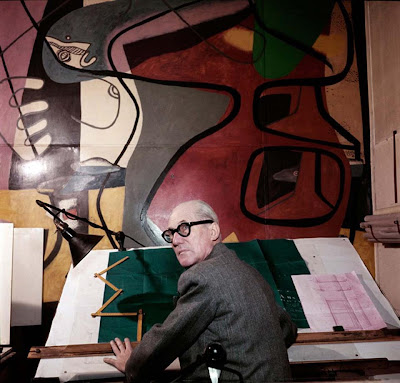 As well, Aldo Magnelli was a confidante of Francisco Antônio Paulo Matarazzo Sobrinho (1898-1977), the Brazil-born nephew of Italian-born Brazilian billionaire Count Francesco Antonio Maria. Matarazzo Sobrinho,  an industrialist and patron of the arts, is better known as Ciccillo Matarazzo. Ciccillo and Nelson Rockefeller secured a partnership between the Museum of Modern Art of New York and the Museu de Arte Moderna de São Paulo. Influenced by Alberto Magnelli, Ciccillo acquired various works of the so-called Novecento, of Italian futurists, as well of works of cubist tendencies, by artists trained in France. 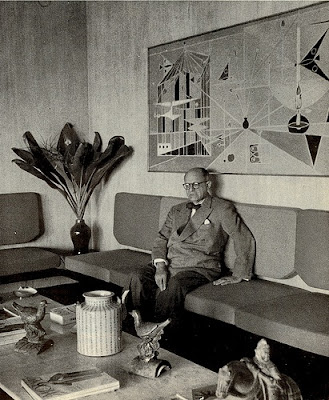 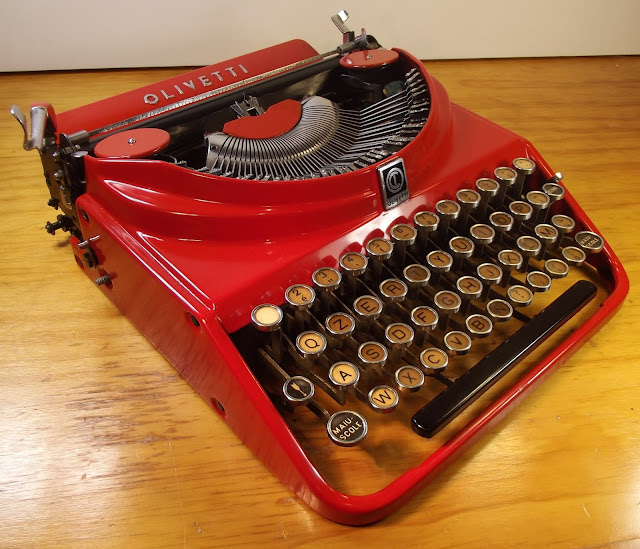 For the ICO MP1, his second major project for Olivetti, Aldo Magnelli designed a die-cast alloy outer casing, one which wraps tightly around the inner workings. It’s a work of artistic genius in the way it seamlessly melds a beautifully tiered, high curved collar around the typebasket with straight lines down to the sides of the keyboard. And it is a design decidedly born of the love Magnelli shared with  brother Alberto for the geometric abstraction style of art which incorporated cubist and futurist elements. The mechanics were designed by Riccardo Levi. 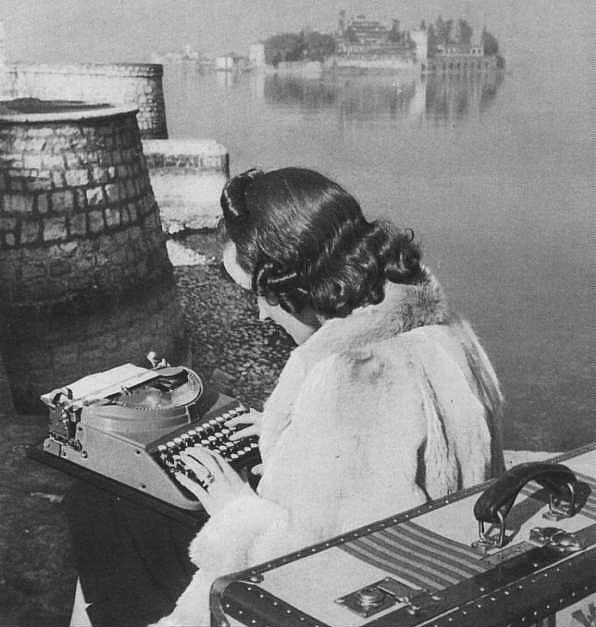 The serenity of this scene beside Lake Maggiore in Italy gives some clue to the calmness the Olivetti ICO MP1 brought me today after the "Typewriter-Mobile" incident last night. See typecast below for the gory details.
Aldo Magnelli had worked on experimental physics in Rome with Enrico Fermi, and joined Olivetti as an engineer. He first designed for the company a horizontal five-drawer filing cabinet called a Synthesis, which went into mass production in 1931.

The Magnellis had close ties with South America, and Aldo was later sent to Brazil to represent Olivetti. In 1940 he opened a steel furniture company in Sao Paulo called Securit, which manufactured office furniture systems that combined steel, aluminium and wood. 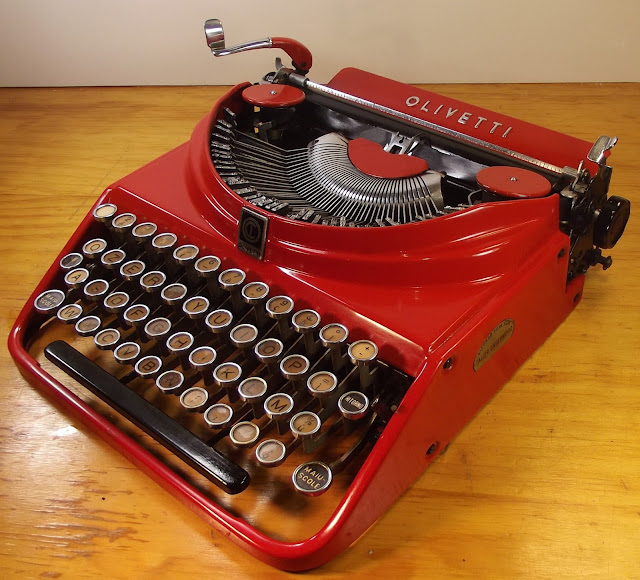 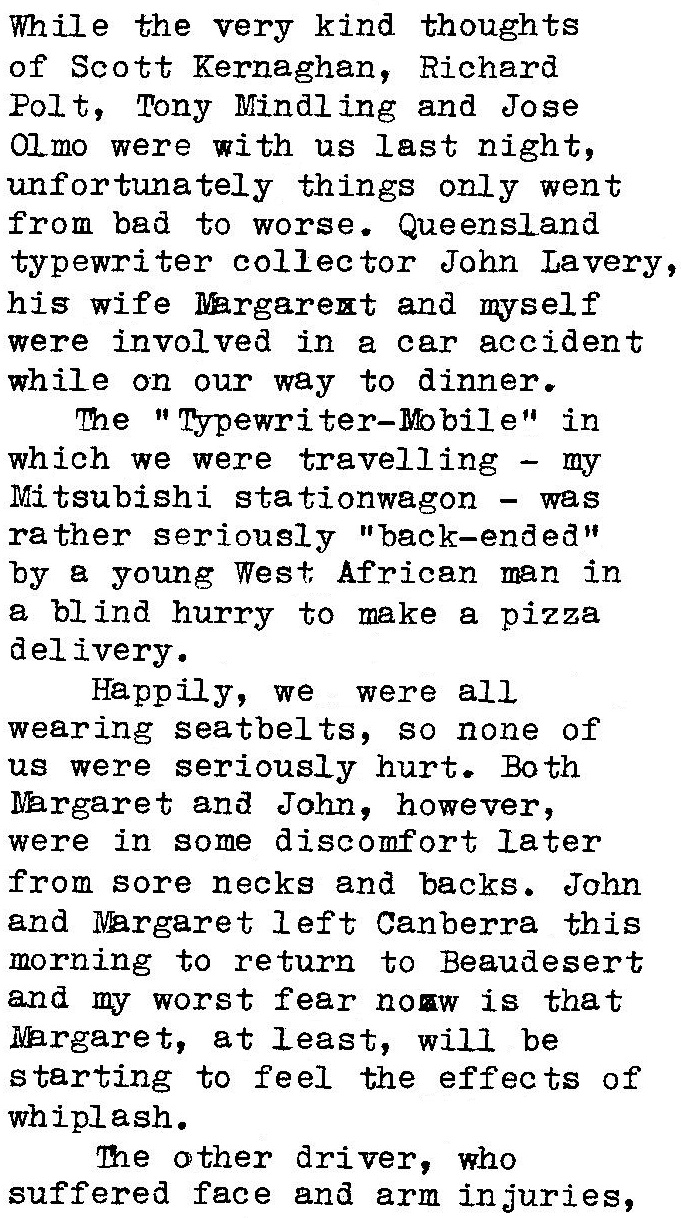 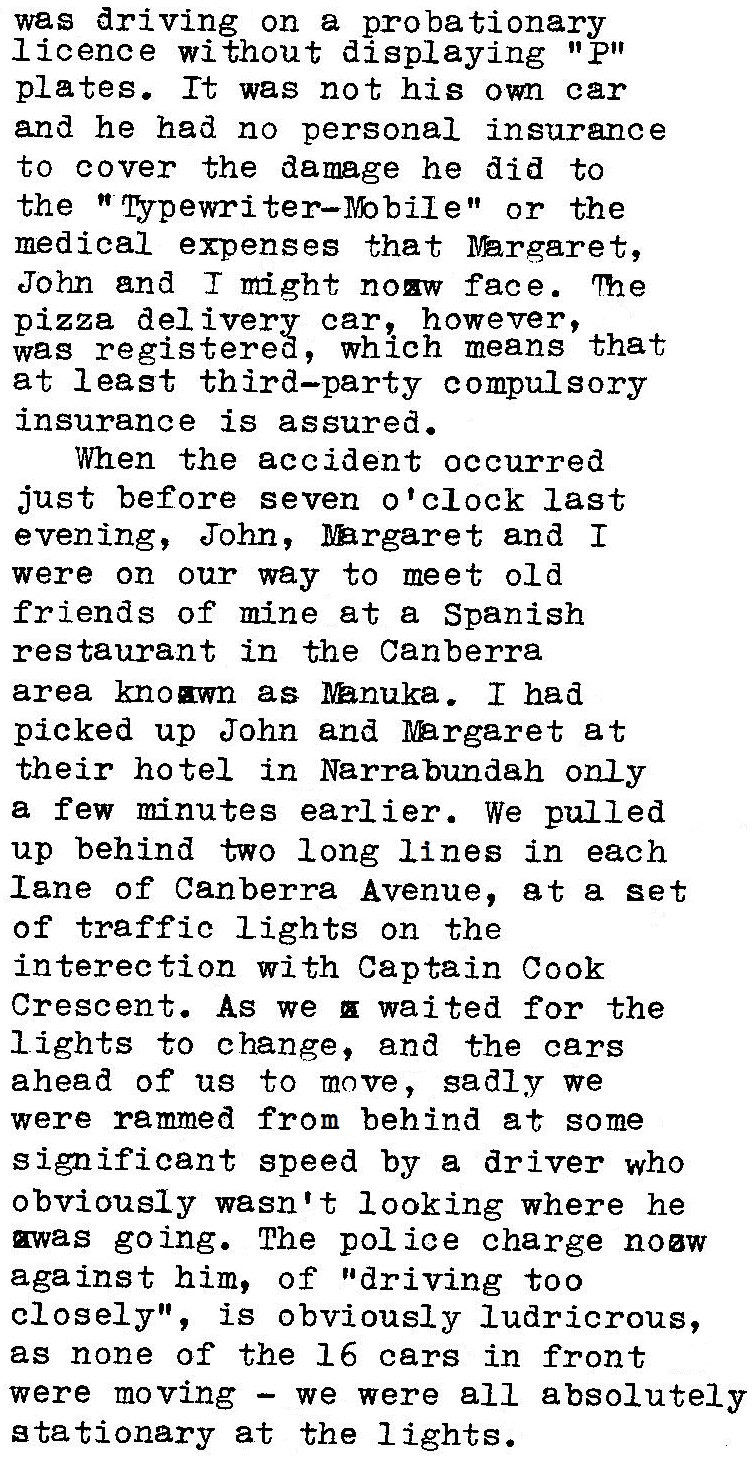 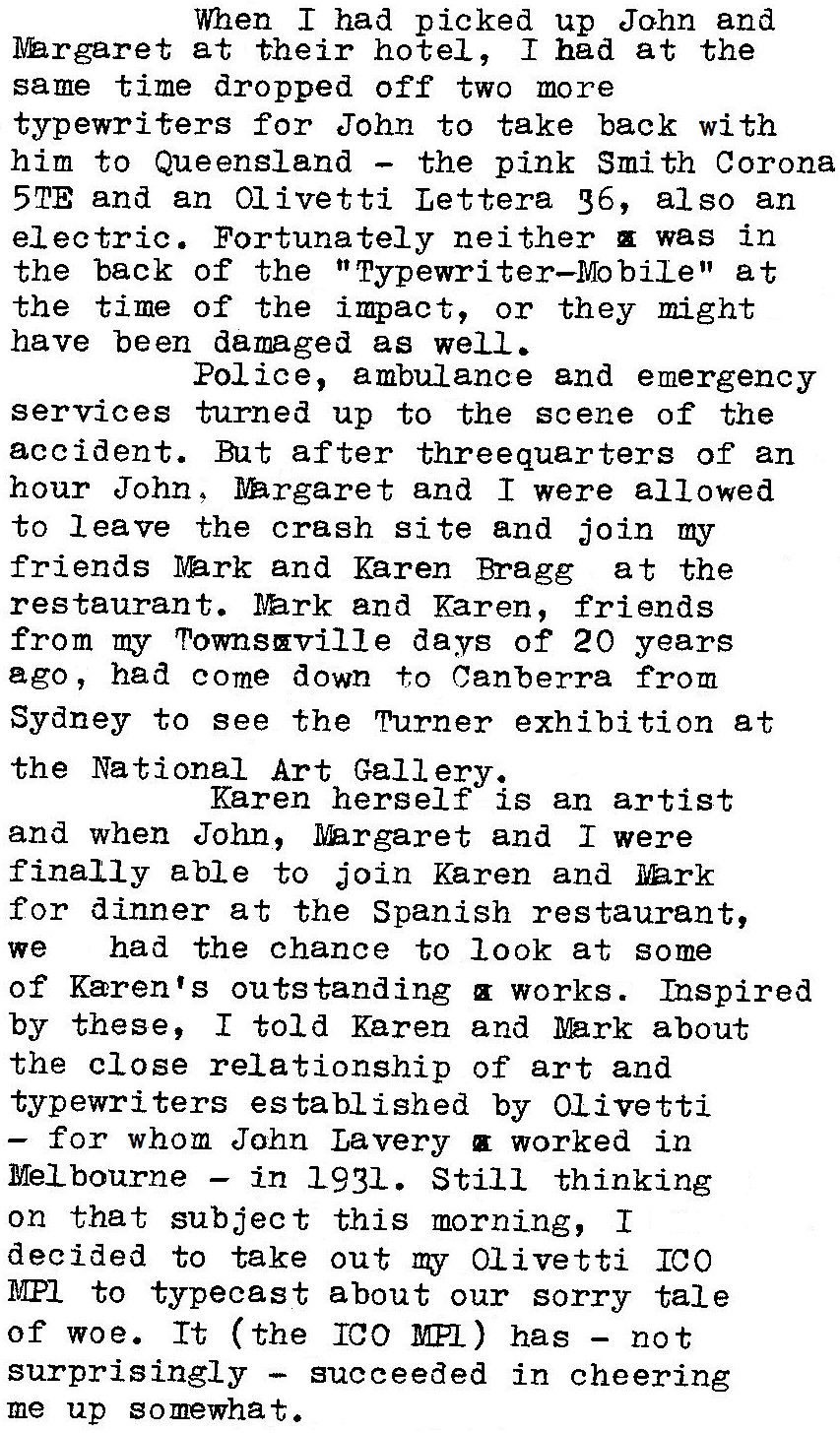 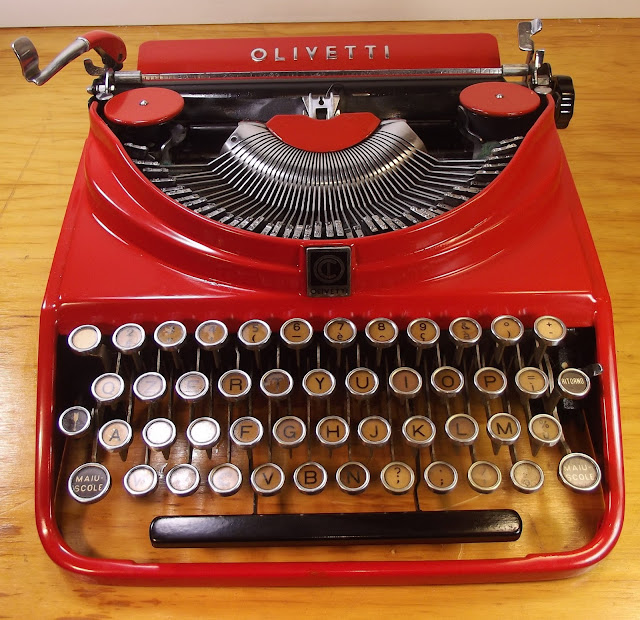 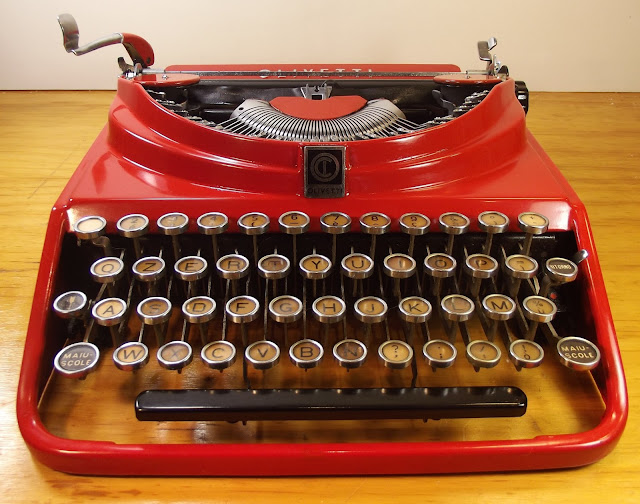 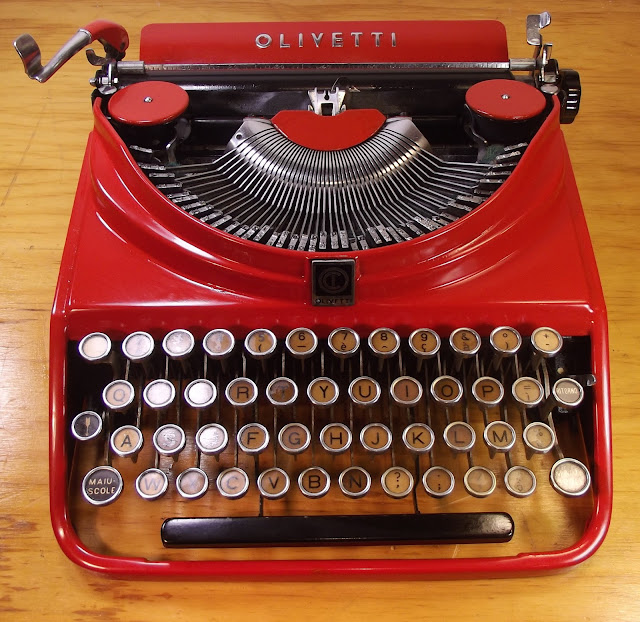 When it rains, it pours. Fortunately the damage is only material, and material things can be fixed. The most valuable in your car - you and your passengers - will be ok soon, and this incident will become the fodder of some conversation someday; "Remember when that pizza guy rammed the back of our typewritter-ladden car? I bet the extra weight of the typers made him stop cold in his tracks..."

I hope you will all recover completely soon. And it was good idea to write about the MP1, one of the great triumphs of portable design.

First your computer is violated, and then the trusty typewriter mobile carrying not only typers but you and your friends. I would end up so apprehensive I'd be curled up sucking my thumb behind closed curtains. And here you are reaching out to the world with images of a very cheery typewriter. Indeed, who could fail to have their spirits lifted at the sight of such a lovely thing, and by the enthusiastic art behind its design.

After a very pleasant outing yesterday (no pizza delivery vehicles encountered) my aunt and uncle were enjoying a tour of my typewriters, and they, too were impressed by the cheeriness of the various colors and the lovely body designs. They do indeed have the power to sooth, by their outward appearance, ingenious mechanical design, and the inspired flow of words. Here's hoping the injuries you and your friends sustained will be so soothed and quickly healed.

Owie! Very sorry to hear about the accident, but happy that there was some 3rd-party insurance involved to help get your Typer-wagen back into action and the Laverys potential medical bills.

Perhaps it's time to weld some spare IBM Selectrics to the bumpers of the car to ensure robust protection against collusions. :D

I'm glad you and your family are mostly okay. What a scary incident! It has been many years since I've been hit by a careless driver, but I've had many recent near misses with road texting idiots. The charge against this driver is indeed ludicrous.

This glorious red machine as an inspiration to look at on an LCD screen. I can only imagine its soothing properties in person. Thanks for posting more history on the intersection of art and design in house Olivetti.

What a way to ruin dinner, not to mention the whole night and to top it off -- your car.

I hope all goes well with all of you and you recover from the bad experience.

That is one fantastic looking ICO.

Thoughts are with you, John, Margaret and your Magna. So glad you're all (relatively) OK, but being a proud owner of a 1998 Magna and of course a few typewriters myself, I really hope the car's not a write off. Mitsubishi Magna's and typewriters are a match made in heaven. Both generally fun to use, reliable and trustworthy.

You are incredible! Your third situation and you manage to endure with all your pain. Somehow you continue to write. I hope you and your friends recover fast from this accident. You are bless.

I am amazed the machine had survived... :P