Why I Love My 'Go-To' Typewriter 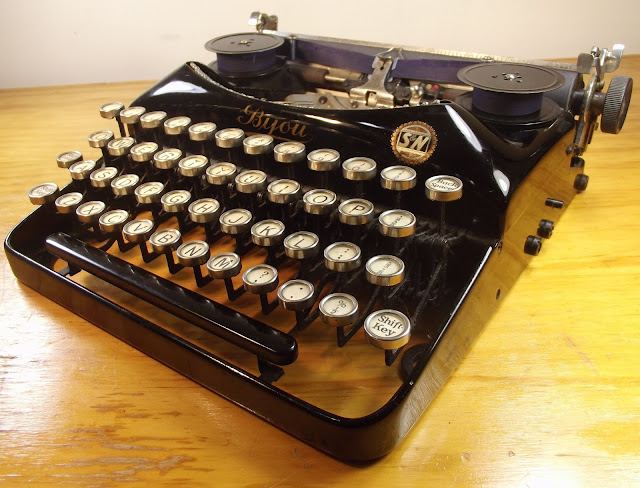 Do you have a "go-to" typewriter? I do. It's a Bijou (Erika) four-bank portable, made by Seidel & Naumann in Dresden in about 1929. I say "about 1929" because its serial number is 121444, and 1929 is the best estimate I can put on it. Like so many pre-World War II German typewriters, the sequence of model and serial numbers for these Erika-Bijou three- and four-bank portables can be most confusing. But more on that later ... 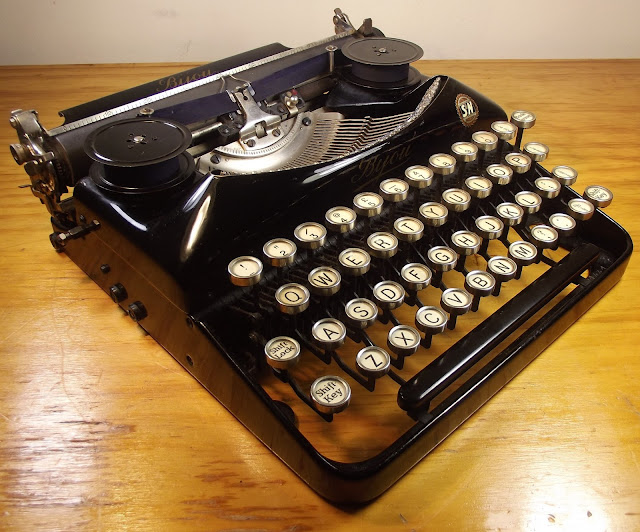 Two things constantly astonish me about my "go-to" Bijou typewriter: first, that I still consistently "go-to" it before all others, after almost five years of using it on an almost daily basis; second, that I do so despite the fact the machine is at least 84 years old, and still has its original blue ribbon. I could "go-to" many much sturdier and more modern machines, ones with carriage levers, but I don't. 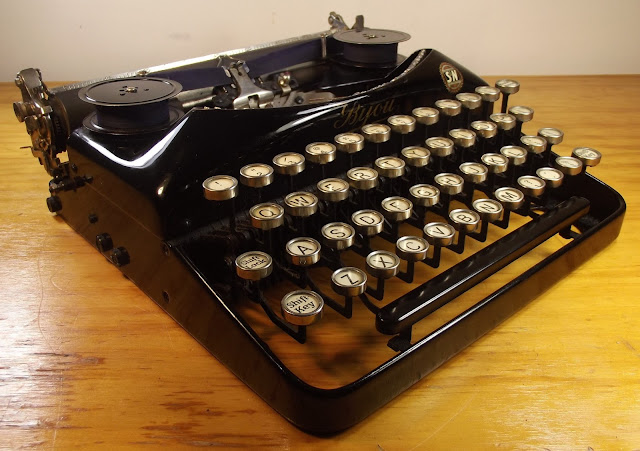 There's just something about the Bijou (like Mary, but at least the Bijou never has me pulling my hair out). I cannot put my finger on what that magical "something" is. The Bijou just "suits me". And I like it. A lot. 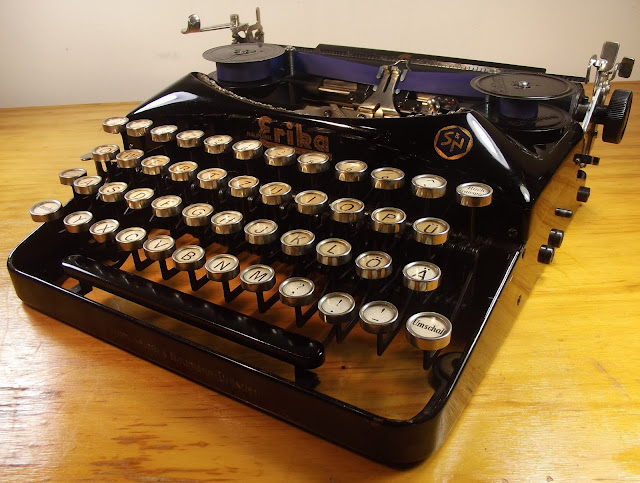 The latest addition to my collection. Serial #187456 (1933).
I like it so much I decided to buy another one. I was genuinely concerned I was over-using the Bijou, and I wanted it to last forever. But when I went on to German eBay looking for a second model, I decided that, for a change, I would get one labelled an Erika, instead of another Bijou. I naturally figured there wouldn't be any difference just because of the name - after all, Bijou is simply an export name for Erika typewriters. 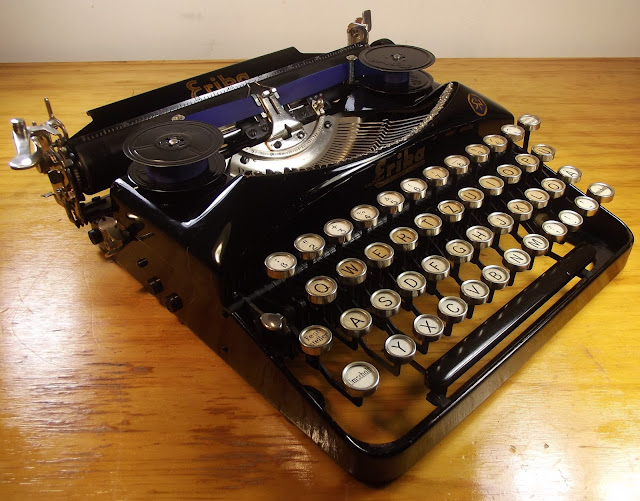 Well, the Erika turned up last Friday and I was initially delighted. It looked exactly like my Bijou, in the same really excellent condition, and a cursory early test type indicated it typed very well too. But when I typecast with the two machines today, I found there was a vast difference between them. Unfortunately for it, I suppose, the Bijou must now press on as my "go-to" typewriter, while the Erika, as nice as it is looks, must go back into the pack, well, well back ... Talk about two typewriters in the exact same line being like chalk and cheese! But then, I guess, we're talking about the difference between the sublime and the no better than "very good". 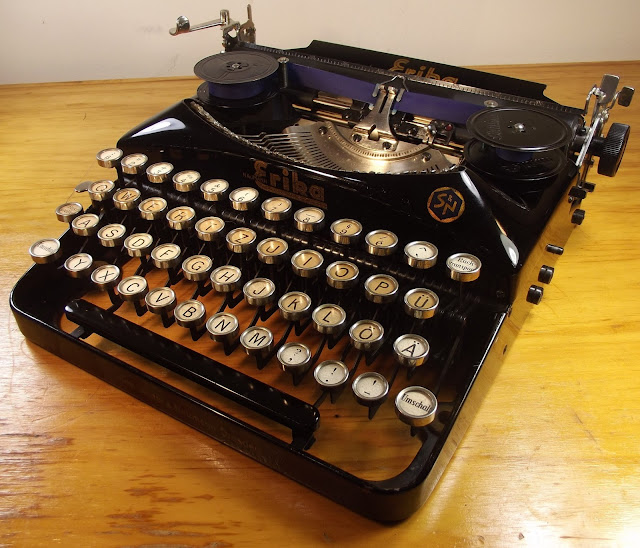 As to what model number my "go-to" Bijou typewriter is, or what year it was made in, I am unable to say with any degree of certainty. According to Ernst Martin's Die Schreibmaschine und ihre Entwicklungsgeschichte, it is a Model 2 and belongs to a range first released in 1927. It is very clear from a lengthy analysis of what he calls the Model 2 that Martin is describing this very machine, not a shadow of a doubt about it. He only mentions a Model 5 as a typewriter produced from 1932. 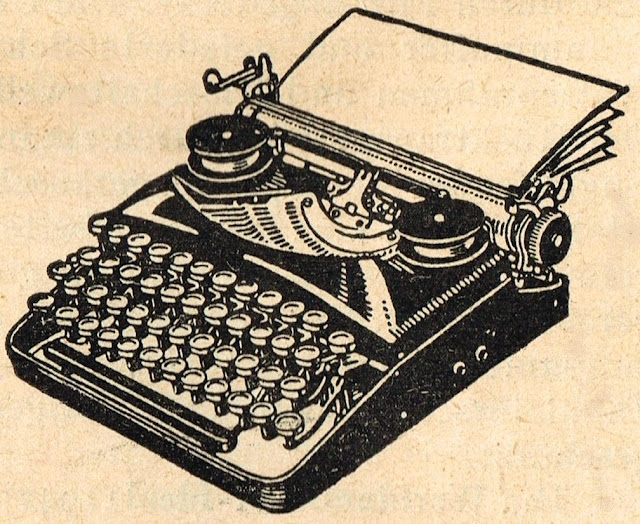 Martin calls this the Model 2 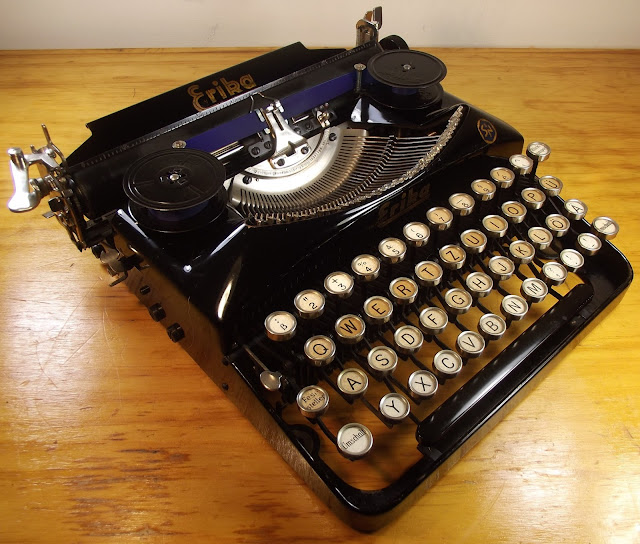 One point Martin makes about what he calls the Model 2 - taking a line from early advertising for the Underwood three-bank, when it went up against the Corona 3 in 1919 - is that it is "ready to use" once one opens the case; in other words, no need to unfold the carriage, as with the Erika-Bijou three-bank. (German historians sometimes refer to the Erika three-bank as a "Standard Folding".) 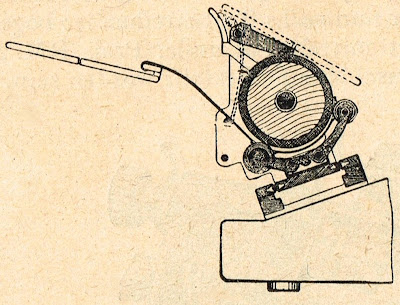 The fore and aft feed rollers, as shown in Martin's book 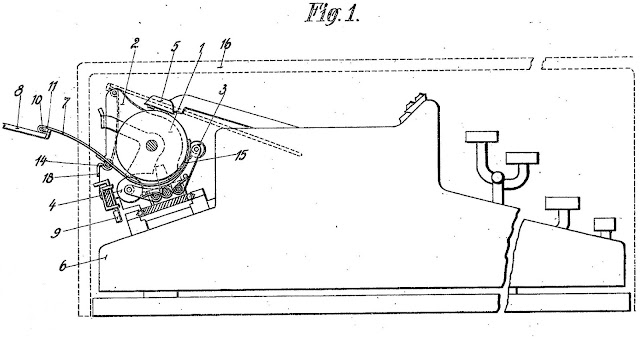 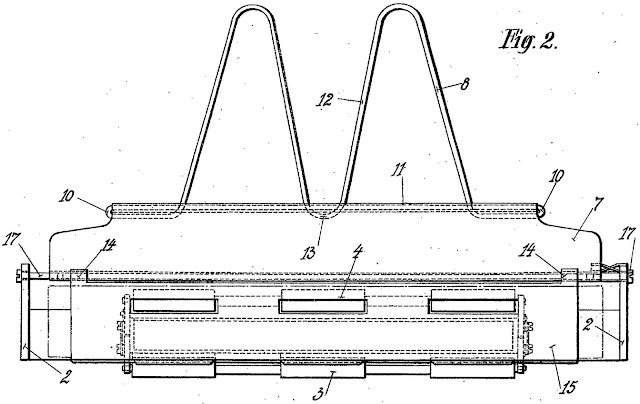 Käppler's 1926 designs
Martin also draws attention to "front and rear paper guide rollers ... which is usually true only for standard machines".
He goes into detail about the typing action, which I find so utterly superb. This, along with the rest of the machine, right down to the feed rollers and paper support, was designed by Paul Käppler (1883-), of Dresden. Käppler patented his designs in Germany in November-December 1926, and applied for US patents in October-November the following year. These were issued between 1929-31.

The typing action as shown in Martin's book 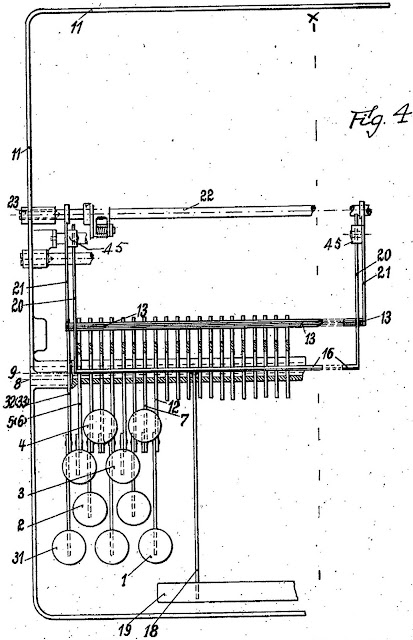 Käppler's 1926 designs
I believe this typing action might, when all is said and done, be the core reason I am so enormously fond of my "go-to" Bijou. Subconsciously,  I suspect I "go-to" it simply because it just types so beautifully. 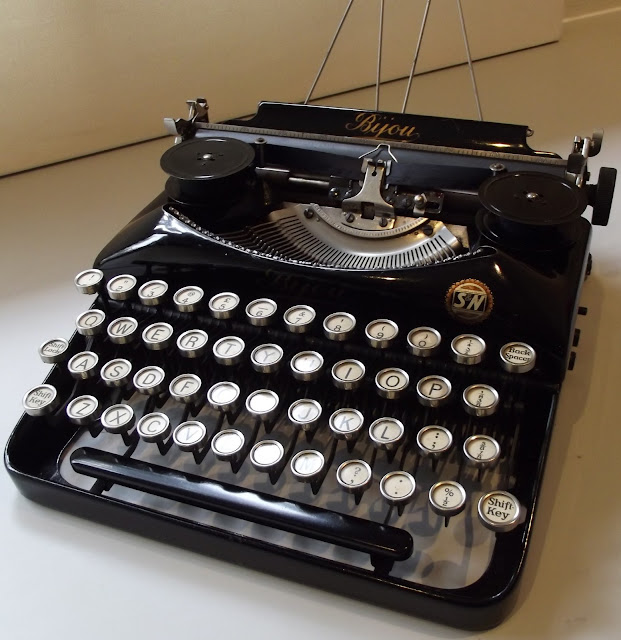 Despite all these fine features, Martin concludes, the machine still weighs a mere 3.8 kg (8.4 pounds). This light weight is most definitely one of the reasons my Bijou remains my "go-to" typewriter. 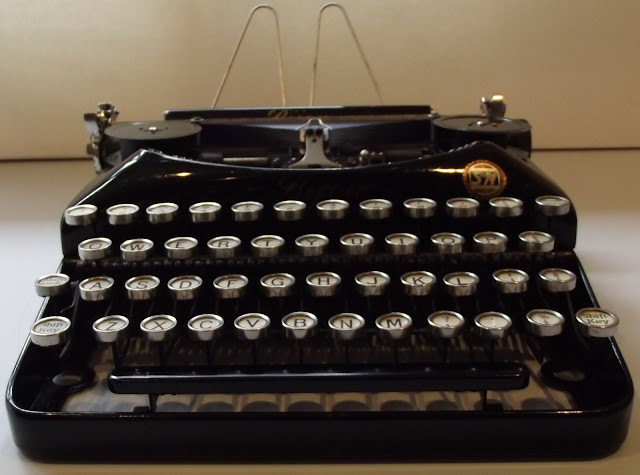 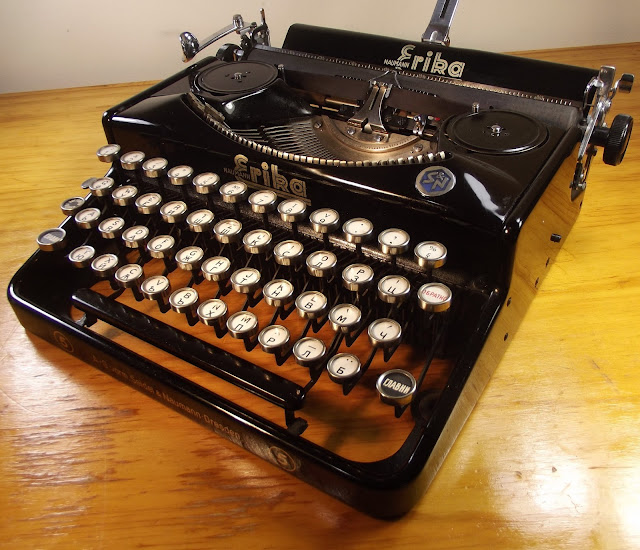 One of my Erika 5s (it clearly says so) with 44 keys! Duh? Serial #664267 (1937).
Now this is where it starts to get really confusing, because most of us know the Erika 5 as a markedly different machine - slightly larger, with the ribbon spools set lower, and significantly heavier. And, of course, the Erika 5 has "5" written on it. 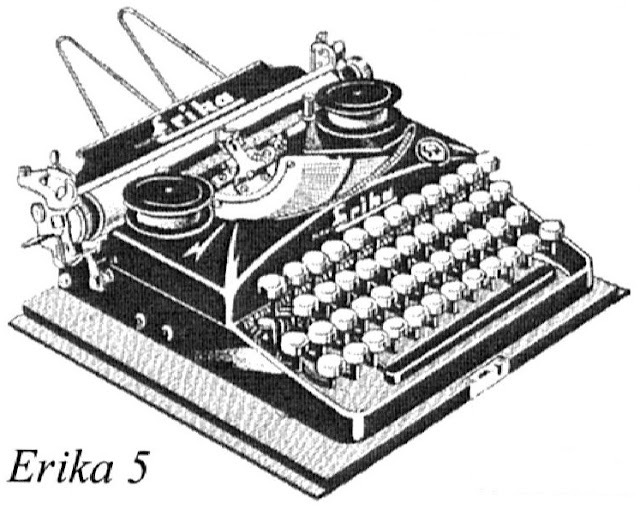 Identified as the Erika 5 in Dingwerth
Indeed, Leonhard Dingwerth in his Die Geschichte der deutschen Schreibmaschinen-Fabriken Band 1 says that in 1927 Seidel & Naumann "came out with the Erika 5 ... entirely redesigned, now a four-row small typewriter." Dingwerth says that "more advanced" versions of the three-bank folding portable were the Models 2-4, the Model 2 emerging in 1911, the Model 3 in 1923 and the Model 4 in 1926. This set of figures is at odds with Dirk Schumann's Typewriter Database serial numbers, which lists the Models 1 and 2 from 1910, the Model 3 from 1911, the Model 4 from 1925 and the Model 5 from 1928. Dirk's sources are Fabriknummernverzeichnis ("Factory number listing"), published by Johannes Meyer Verlag, Pappenheim, 1941, and Fabrikationsdaten von Schreibmaschinen, 1935 and 1942, published by Carl Teege Verlag, Hamburg. 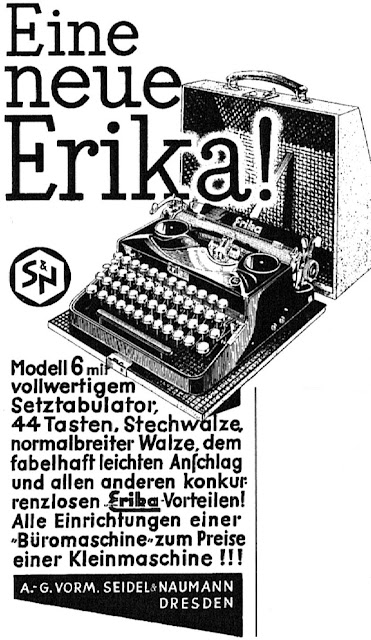 From Dingwerth
The Erika that arrived here on Friday was listed on eBay in Germany as a Model S, and yes it does have only 43 keys, as does my Bijou, so I must assume it is the "simplified" version. In mentioning "simplification", I might add my Bijou has no carriage return lever - it is not missing, it never had one. It was made like that. In the engravings of the Model 2 in Martin's book and the Model 5 in Dingwerth's book, there are carriage levers. My "new" Erika also has a carriage lever. (I must say the lack of a carriage lever on the Bijou has not proved a handicap when I have used it for major typing jobs.) 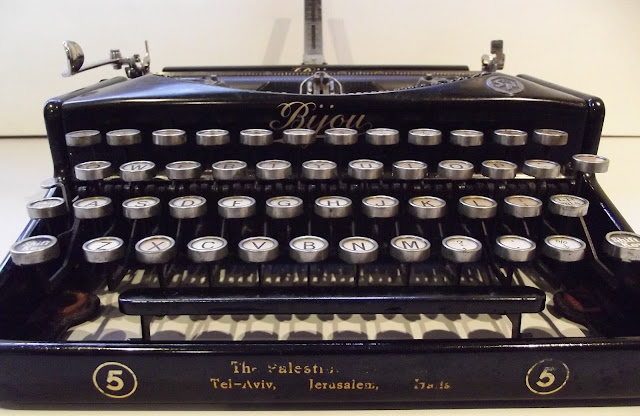 The Palestinian banking Bijou 5 that I gave to Scott Kernaghan also has 44 keys.
Georg Sommeregger on his webpage on these models has both variations as Model 5s. Perhaps, like the Torpedo 14, there were two, quite different versions under the same model number. Here is my Model 5, with the bilingual keyboard and 44 keys, not 43! Did I say this was confusing? 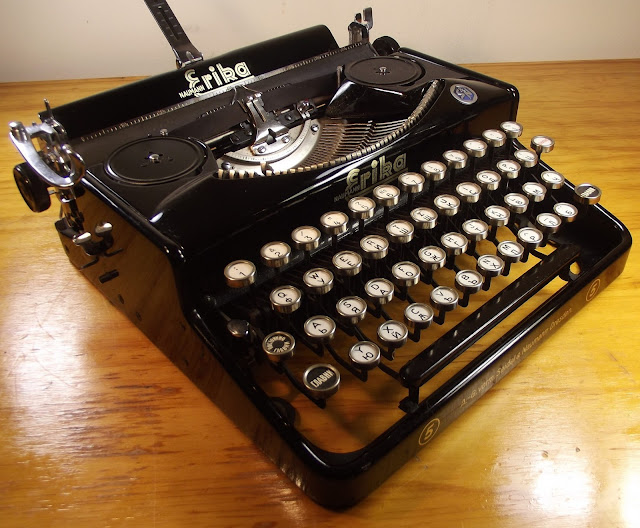 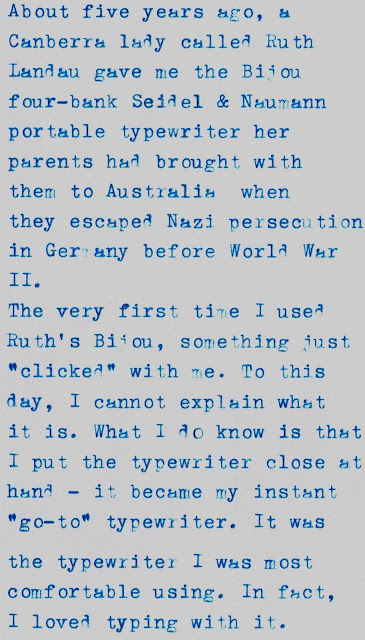 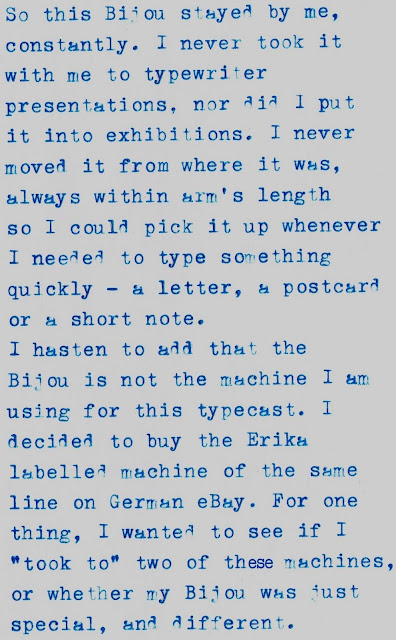 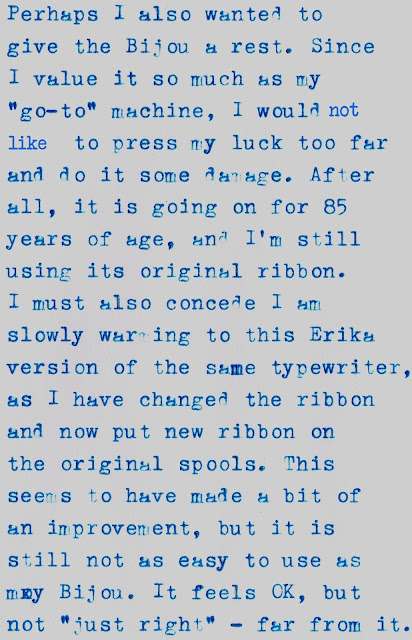 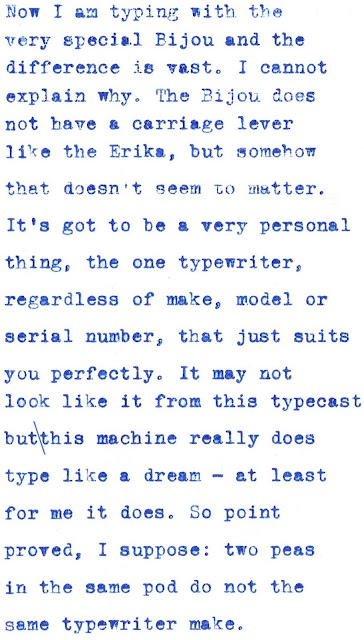 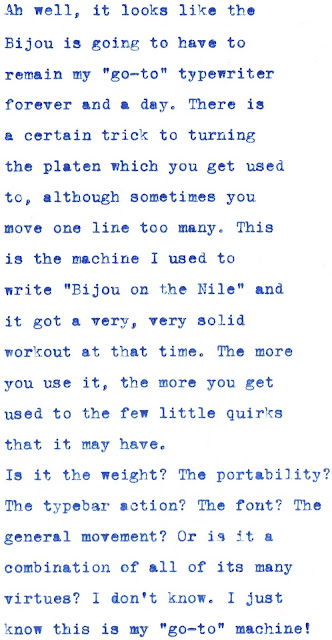 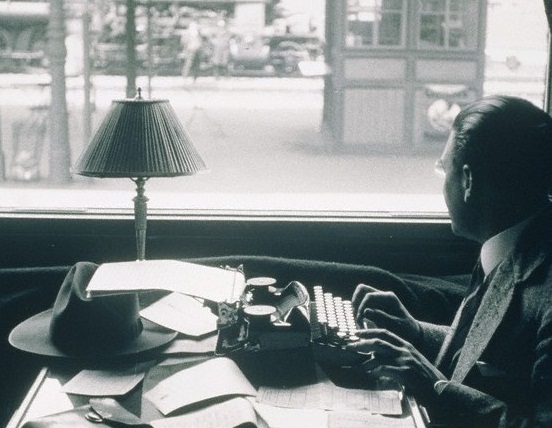 Typing on the Bijou at a Paris railway station, 1929.
How long have I been using this machine?

Thanks for sharing the story of your go-to typewriter. Mine is an Underwood Leader. We share the same rhythm and work together beautifully. I could never want a finer typer.

That is a lovely little typewriter. Funny that your Erika feels so different.

I guess I have several go-to machines but am still looking for the Perfect Typing Experience. It's part of what keeps me hunting.

I have several "Go-to" machines, depending on what kind of mood I am at the moment. For manual desktops: my Remington KMC. For portables: my Olivetti Lettera 32. And for my actual work (filling up multicopy forms, making labels, etc.): mi Selectric II.

Love this post; in all my various collections, I always have one or two "go-to" machines, whether it be fountain pens/inks, typewriters, pencils, headphones...
That sure looks like a nice typewriter. Here's to another 85 years!

No contest for the "go-to" in my lot - my very first typewriter; a 1957 Olympia SM3 given to me by my folks when I was a high school junior. Everything works just as smoothly as when it was new, the type is even and clear, and best of all it just feels good and my fingers find the various levers and keys pretty much on their own.

I like my Erika 5 a lot. But I once typed on a Torpedo IV or 15 (not sure about the model) and I fell totally in love with it! Reading this blog post makes me realize that I really need to get it from the current owner... No doubt though that I love the German typewriters!

I found this when I was searching for more info on my go-to an Erica 5 tabulator. I love the look of your Bijou, my Erica has been a reliable friend. I used to haul it up to school to write in a cloth paded bag a friend made for me. I wrote my MFA thesis on the tabulator!(I just like saying tabulator it sounds like my typewriter could turn into a robot from a 90's scifi movie)

I just came into possession of what I believe to be an Erika Model 3. It doesn't appear to have a carriage lever, but I can't figure out how to rotate the platen to insert paper or move to the next line. It's virtually impossible to do by hand. Maybe it's seized and needs to be lubricated? The machine is otherwise in very good shape.

Once again, into the breach.

Of typing machines decided upon from your marvelous sharing, Robert.

I just purchased an Erika identical to your "go-to Bijou," with serial number 136731 which puts its year in 1931. It's in nearly mint condition, and will add that certain glow to the experience imparted by my other Erika 5 from 1932 that has the carriage return lever, but same chassis.

Upon reading your review of these even simpler mechanics in the Bijou, and seeing a YouTube video of this machine, I absolutely fell in love with putting your hands on the pinching mechanism to advance the paper, and slide the carriage along its journey. How marvelous such simplicity!

Once again, thank you for not only what you share about these marvelous typing machines, but especially, how you share it.