Uplifted by Lower: When Two Typewriters Are Better Than One 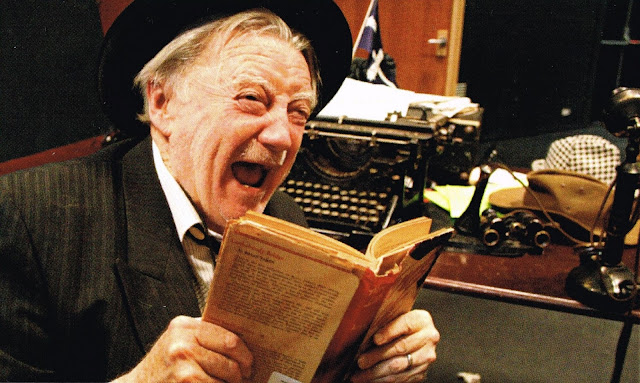 Max Cullen with his own Underwood Standard (a 5?).
Yes, that's the Eureka flag in the background.
After a day lamenting Baz Luhrmann's unwarranted extravagance in his direction of The Great Gatsby, it was uplifting to attend a stage performance which remained faithful to the tenor of the book and to the period in which it was set (including the music and the typewriters), and which was given with a subtle, suppressed yet memorable force.
No rap music here, no Le Mans or Indy 500 or dodgem car driving, no surreal mansions hosting parties for thousands. It was one man on one stage with one door, one desk, one bar, one beer and two typewriters.
This was Max Cullen's one-man show about the comic genius of Australian journalism, Lennie Lower, called How To be (Or Not To Be) Lower. It was staged at The Street Theatre in Canberra during the past week.
I attended as a guest last night, having given Max an Imperial 50 standard-size typewriter to use in his play. 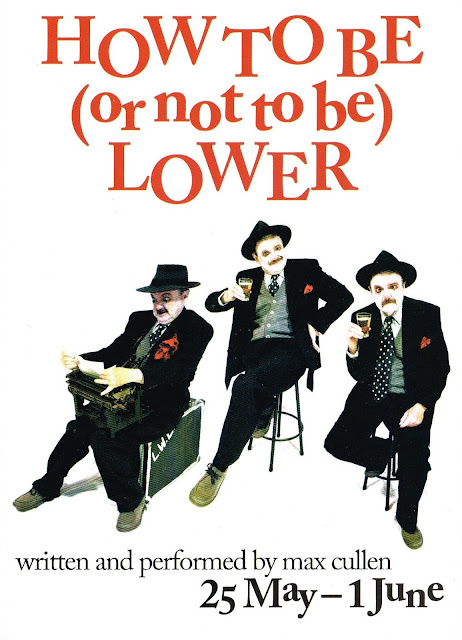 What, by the way, does an actor-playwright type when he is testing a typewriter he plans to use on stage? Well, the answer is in the image at the top of this post.
I thoroughly enjoyed the show and would have no hesitation recommending that you go along if it comes your way (Steve Snow, take note!). I have to say Max is very adept at a typewriter (he also carries round his own Underwood Noiseless portable).
For all this, I had an increasingly strange feeling as the performance progressed. I never knew Lennie Lower, of course - he died the year before I was born. But I did know, extremely well over many, many years, another great and very funny Australian newspaper columnist, Maurice Desmond Bernard Carr. 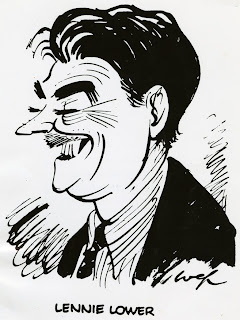 Maurie Carr, who wrote his sublime daily columns
on a Hermes Baby portable typewriter.
I would rate Maurie Carr easily the best columnist I have ever worked with, in this or any other country. Moreover, he would have to rank right up there with Lower as one of the best this country has ever produced.
Like Lower, Carr led a fascinating life with many and varied jobs. He travelled extensively around Australia and overseas. Maurie went to Perth Modern School with a prime minister (Bob Hawke), an entertainer (Rolf Harris), an editor and publisher (Maxwell Newton) and a writer (Alan Seymour). After military training Maurie studied law at university, then entered journalism. He was the first sports editor of the national daily, The Australian, in Canberra in 1964, but was sacked by Rupert Murdoch before the first edition was published (for talking sense). An investment in nickel miner Poseidon came good with the bubble of September 1969 and Maurie travelled to Europe, where he edited the Dutch edition of Encyclopaedia Britannica and was briefly a golf writer, covering the Ryder Cup in St Louis in 1973 for The Times of London, where he worked as a sub-editor. At one time he was a door-to-door shoe salesman in Melbourne. He was an adept footballer, a champion boxer and a single-figure handicap golfer.
Maurie was a fabulous raconteur and had the exceedingly rare ability to write just as he spoke. Reading his column was exactly like standing in a bar hearing him tell one of his vast repertoire of humorous stories, except one usually didn't have a beer in one's hand. It would have been spilt as one shook with laughter, anyway. 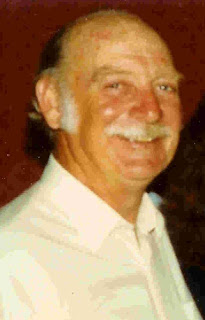 To be the best of my knowledge, Maurie Carr and Lennie Lower never worked together or knew one another. And yet all the mannerisms portrayed by Cullen as Lower last night, all the little quirky movements and sayings, were Maurie Carr down to a golf tee.
It was a spooky experience. I was mesmerised, looking at Cullen and thinking Maurie had somehow come back to life and was prancing about the stage.
Cullen never met Lower and I doubt he ever knew Maurie Carr. Yet in setting out to play one great Australian newspaper columnist, he undoubtedly captured the very essence of another - indeed, a very similar character and writer.
It will be Cullen as Carr rather than Cullen as Lower that I will long remember. I don't think Max will mind that one little bit. 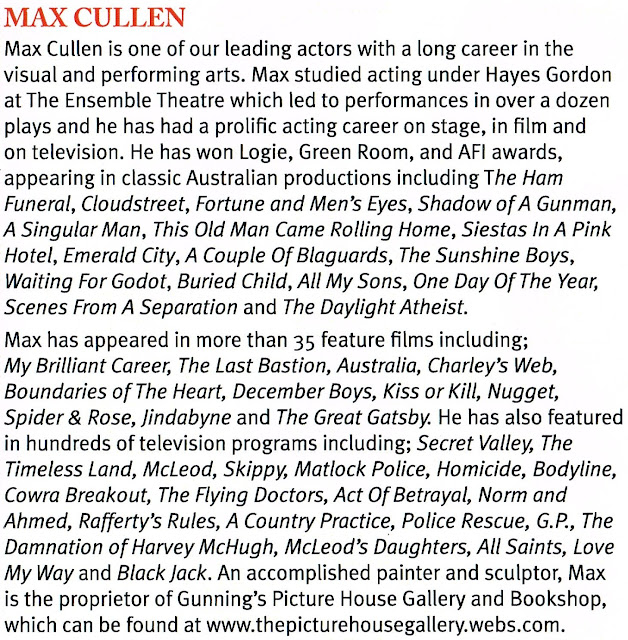 Posted by Robert Messenger at 17:11