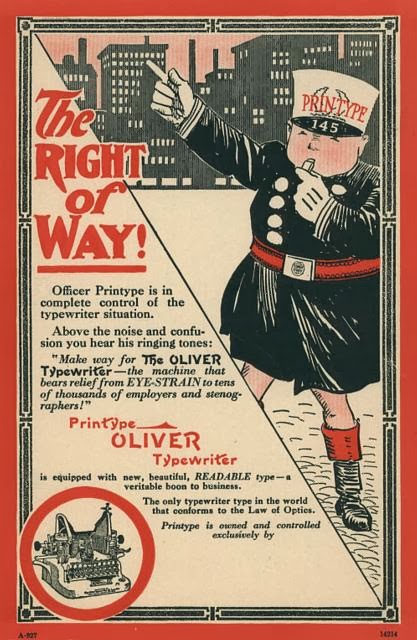 In late 1910, Typewriter Topics took the unusual step of publishing a letter from the Yōst Typewriter Company, in which Yōst was highly critical of claims made by one of the Topics' other major advertisers, the Oliver Typewriter Company. This concerned "A Revolution in Typewriter Type", launched in a rival publication. The Oliver claims were contained in the very well-known advertising campaign launching Printype. 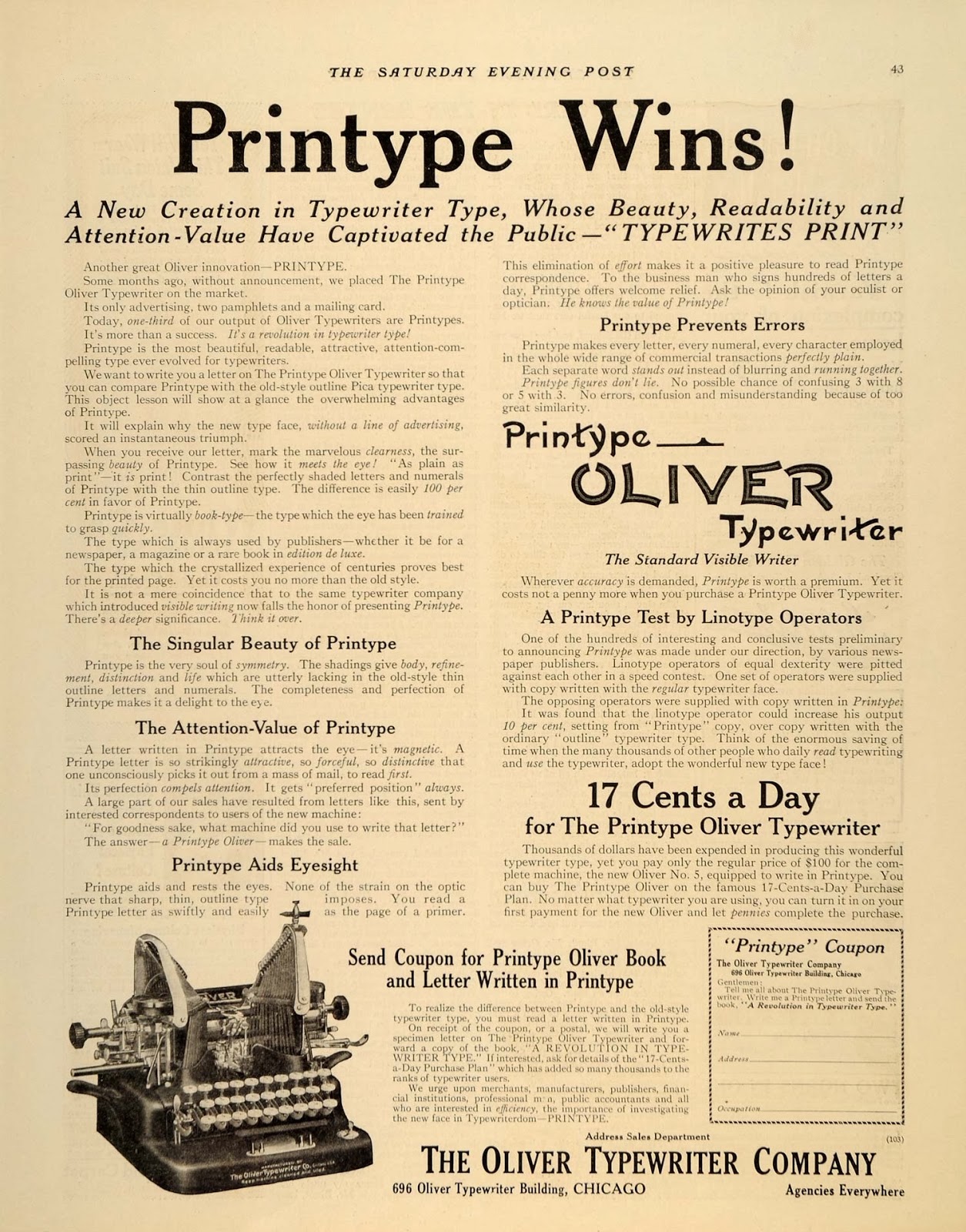 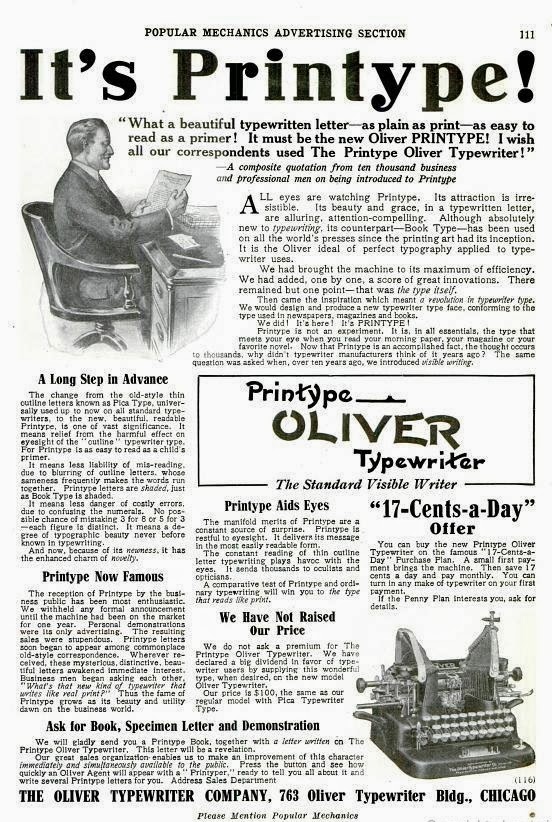 This font is downloadable from Richard Polt's The Classic Typewriter Page 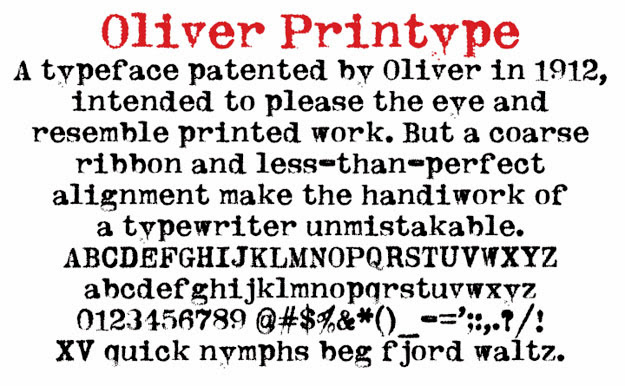 Yōst pointed to its already well-established Imperial typeface (launched 1905), as well as Remington's Clarendon typeface, in what Typewriter Topics called "A Justifiable Exposé": 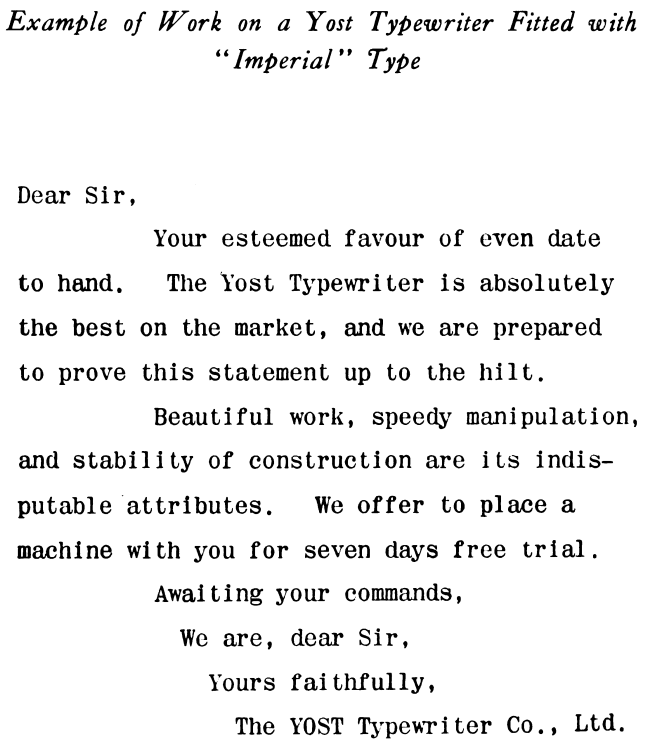 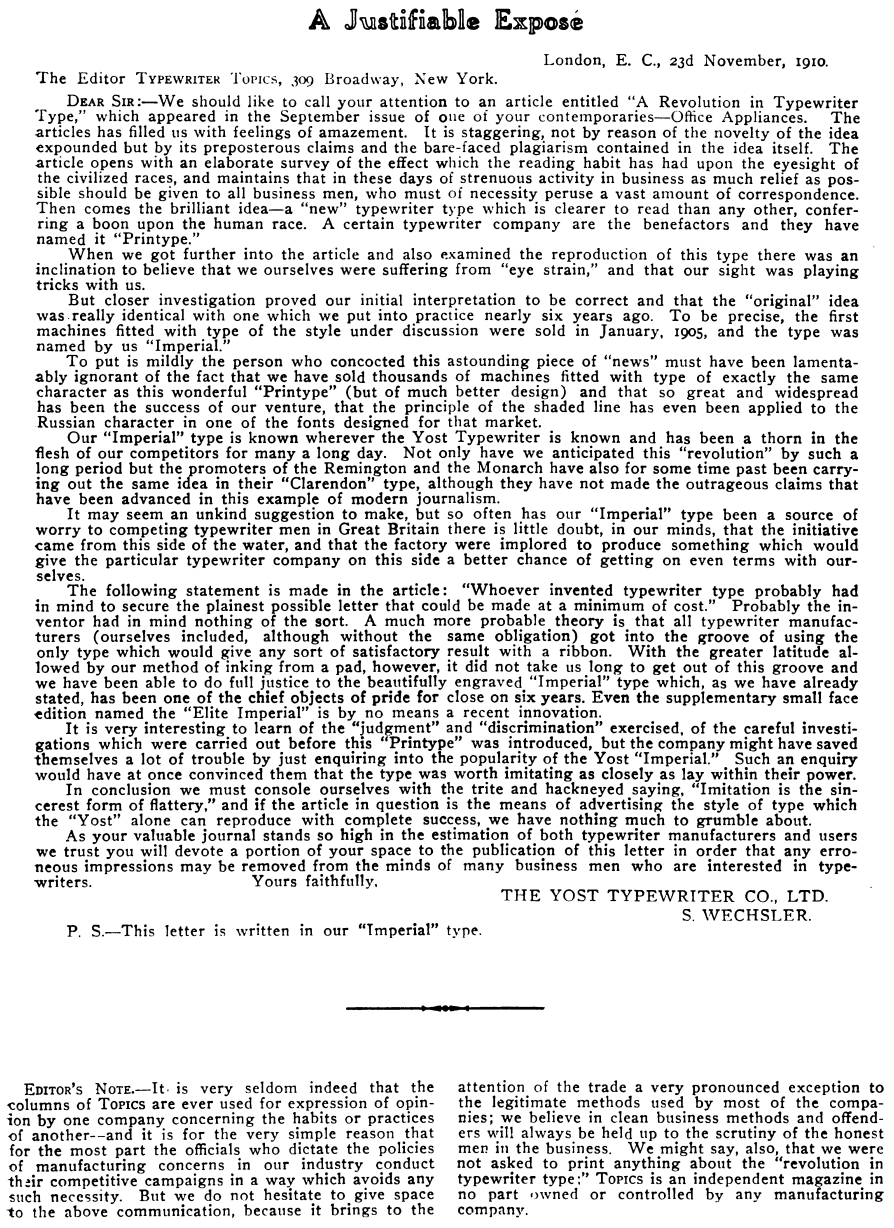 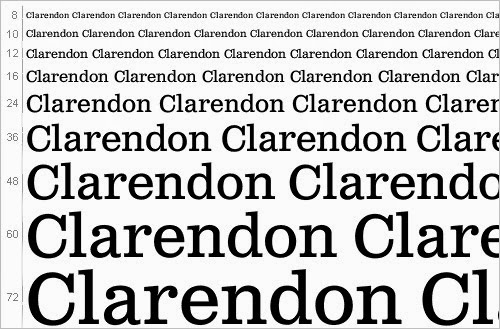 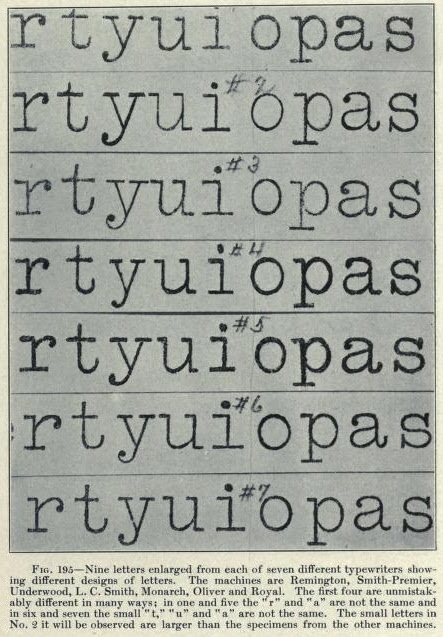 Indeed, Yōst was the flavour of that month for Topics: 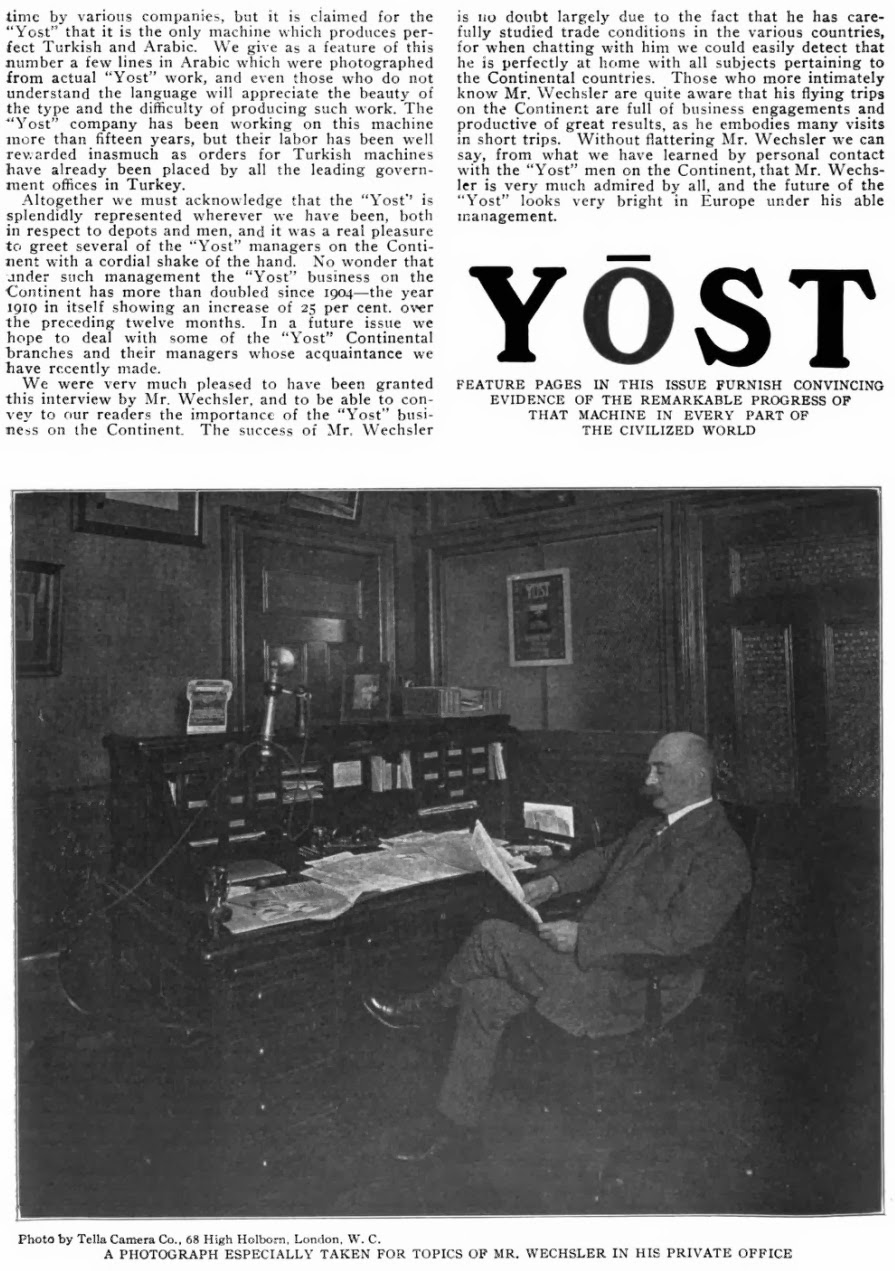 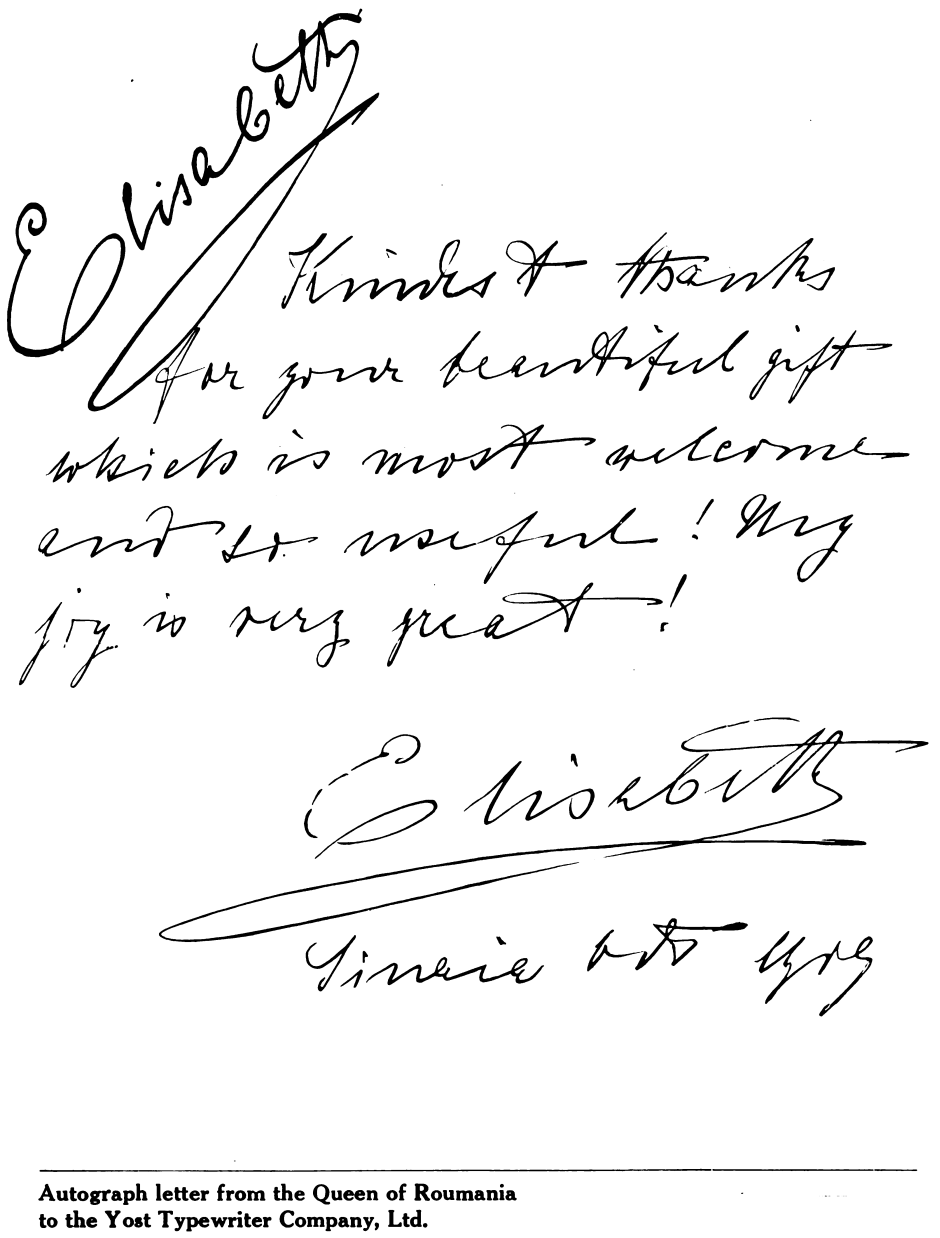 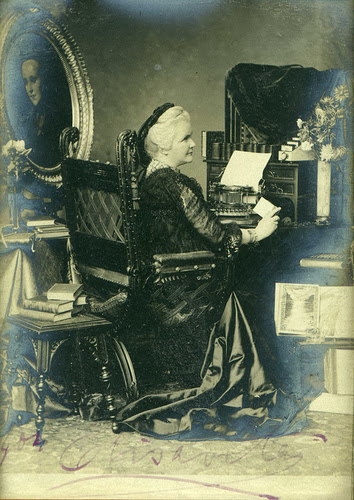 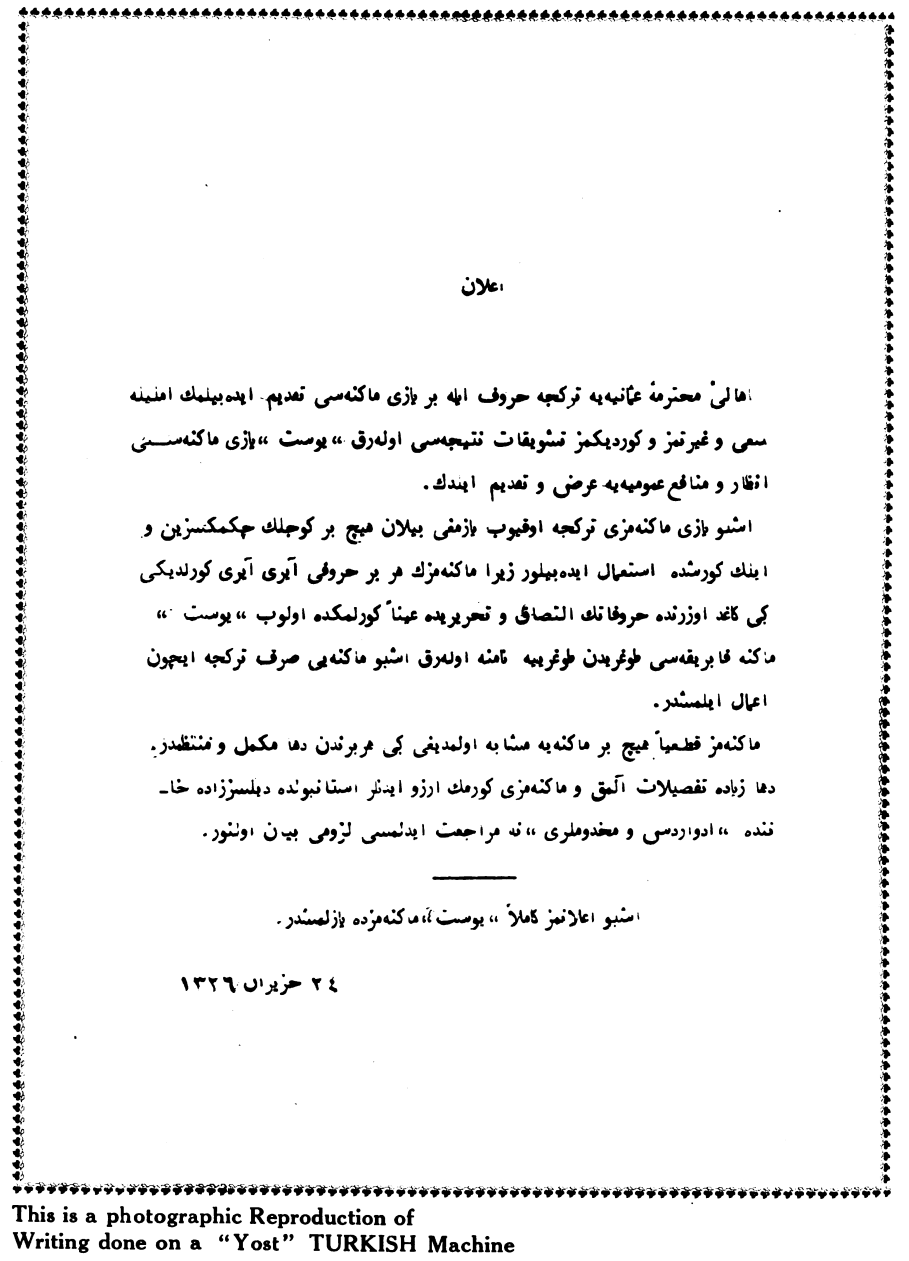 Posted by Robert Messenger at 01:32

Very interesting. I have to agree with Yost, the claim that Printype was a brand-new innovation was false, and the claim that it looked just like print was also false, since Olivers were monospaced and used a ribbon.

I have never had the chance to try a Yost no. 20 in great condition with a functioning ink pad, but I imagine it would be one of the very best typing experiences: basket shift, fully visible, great alignment, direct inking. And I would choose the Imperial type!

By chance, Alan Brignull recently pointed me to a very interesting Book of Type Specimens from 1907 (quite early) that features the "Oliver Printype" TYPE. In other words, here we have an example of traditional type imitating a typewriter that imitated traditional type. Where does tribute end and trickery begin?

Can I just add, 'Officer Printype' has absolutely no credibility. I mean, how can you take someone who isn't wearing pants seriously?

Get some pants, man!

Mind you, I often type pantsless, so I can hardly talk.

Richard, thank you so much for that link to the type book.
Scott!!! Oh my, the image of you typing pantless!!!??? Please, this is a family friendly website! (Luckily, not on an Palestinian banking Erika 5 at CMAG. Now that would have been a photo!)