What a Happy Christmas for Me! It's Here! The Masspro! 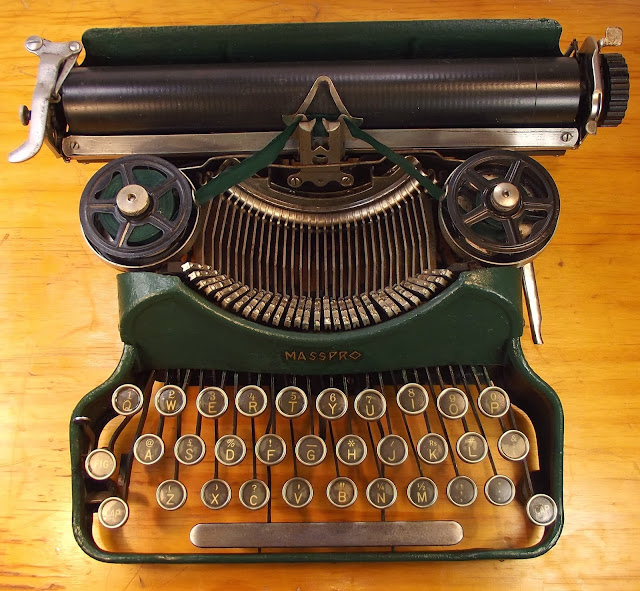 I got the call at 4pm this afternoon, less than two hours ago, that a large parcel had arrived for me from Germany. The anxious three weeks-long wait was over! 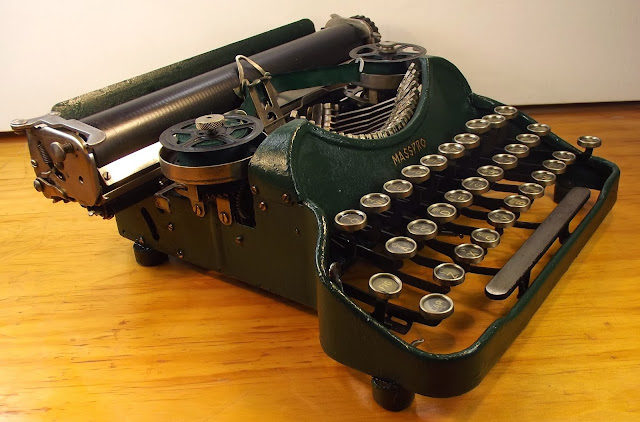 By 4.10, having driven like Stirling Moss in British racing green, I was at the West Deakin Post Office. Yes! Writ large on the side of the box was that magic word: 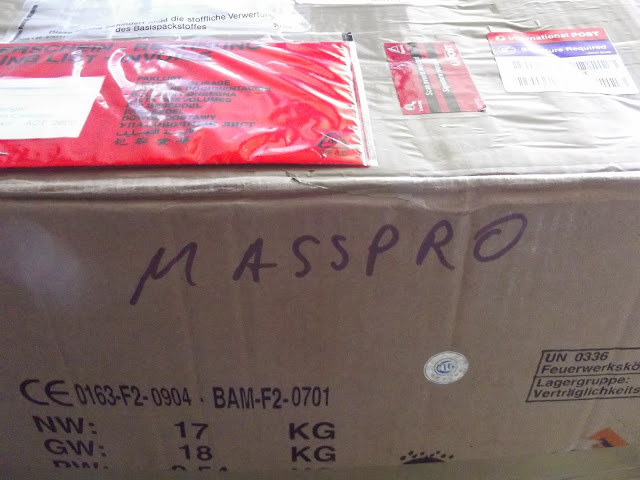 I instantly took the Masspro out of the box and drove straight around the corner to a friend. "This," I said, proudly holding it aloft (gee, it's light!) "is what all the fuss has been about."
"Oh," she said. "It's so lovely!"
It sure is!
There had been, I must confess, unnerving moments during the past three weeks, moments when I thought this wonderful day would never arrive. Thomas Kramer had sent an email on November 27 to say the Masspro was on its way, and included a tracking number. But "no such number" kept coming up on the DHL website. Still, I never lost faith. 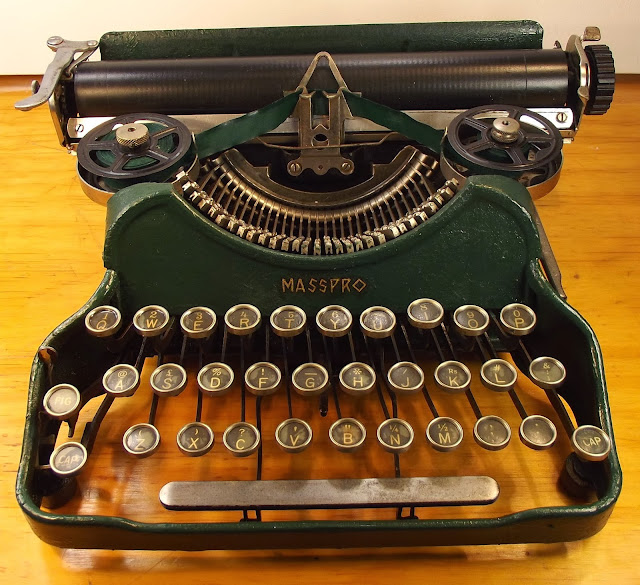 So, a HUGE THANK YOU to:
Thomas Kramer of Fritzlar,
Fritz Niemann of the Galerie Alte Technik, Dissen,
and most especially to
HERMAN PRICE, of the Chestnut Ridge Typewriter Museum, Fairmont, West Virginia.
They have combined to make this possible and to give a "Down Under" typewriter collector the very best Christmas present he could ever wish to get.
Is it holly green, ivy green or mistletoe green? Who cares?
It's CHRISTMAS GREEN! 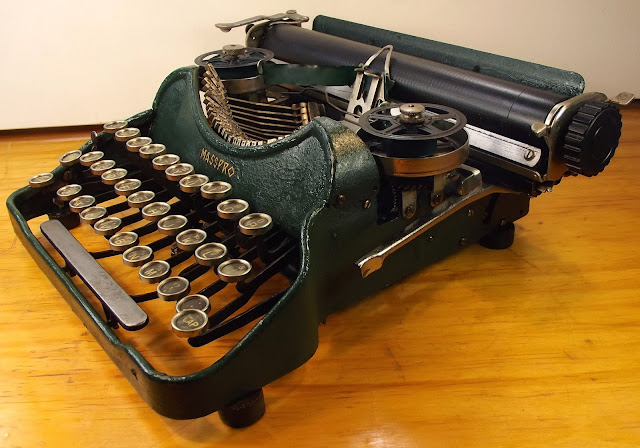 To my utter astonishment, I first saw - indeed, first became aware of - the Masspro portable typewriter at the Chestnut Ridge Typewriter Museum on Friday, October 11. It was love at first sight. But I was pretty quickly made aware that to hold one of my own would be difficult, to say the very least. And yet here it is, just nine weeks later! 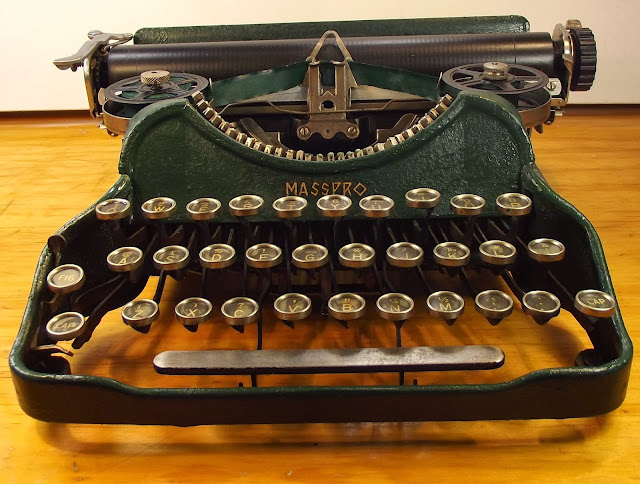 This has been a monster week for me - everything seems to have been going right since last Friday (more on that later). No sooner had I unpacked the Masspro and photographed it than, at 4.48pm, the "Baggy Green" wearers of Australia regained the greatest trophy in cricket, the Ashes, after a wait of four years, three months and 25 long days. (Australia beat England by 150 runs in the Third Test to take an unassailable 3-0 lead in the series.) I'm certain Herman will forgive me, at this time, mixing the joy of typewriters with the joys of sport! 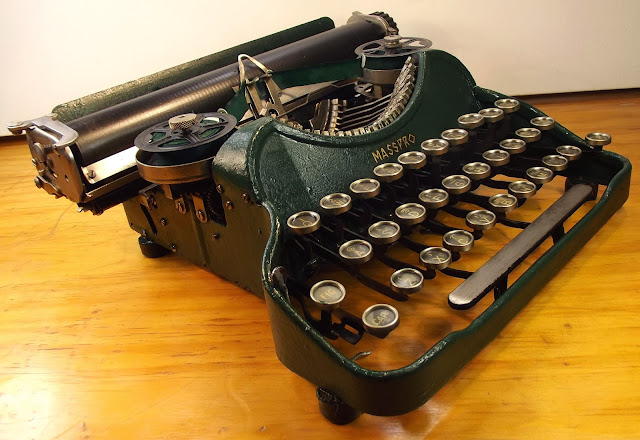 Although the wait for the Masspro to arrive from Fritzlar did at times seem interminable, once I had unpacked it and started to type with it (immediately, as Typospherians will appreciate) it seemed to me like the end of a wait of 65 years, eight months and 12 days. This typewriter and I were meant to be together. This is destiny!
It was fascinating to type with it, to watch its unusual mechanics in action, to look at its incredibly compact design (by George Francis Rose) at such close range, to begin to work out its various levers and its multitude of quirks. Oh what fun I have ahead of me! 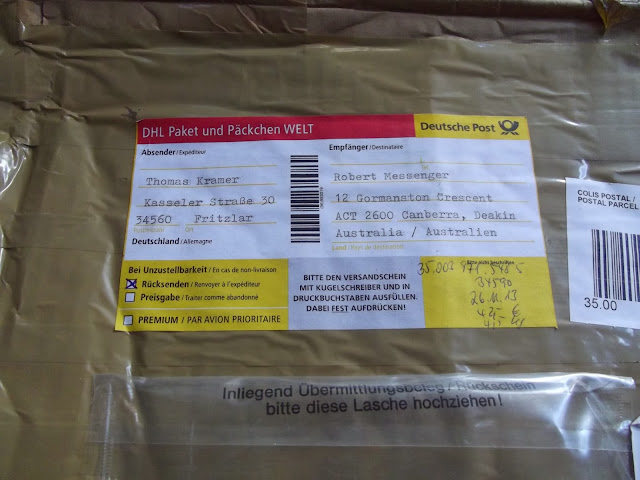 There was an especially nice touch from Thomas, with the parcel label TYPEWRITTEN!
Posted by Robert Messenger at 18:00

Man, I could feel your excitement just reading this! Your enthusiasm just poured out of the page.

Congratulations, Robert! That machine is a real beauty, that's great that you have one in your collection.

It has Rose written all over it but no sign of a hinge. Lovely condition too. Enjoy the Masspro for ever and the Ashes while you can. Have a great day!

My enjoyment of this otherwise excellent post is tempered by the cricket result! :)

Thank you Scott, Miguel, Rob and Steve.
Yes, Scott, you picked it, I am terribly excited about owning one of these.
I guess the first and most important Rose hallmarks are weight and compactness.
I like the devices. The long lever on the right side is the back spacer, which you push in. The ribbon direction switch is easy to get at and effective, unlike many machines of this ilk. The platen release switch is basic but neat, as is the line spacer switch. The escapement seems very basic, too, like the Corona 3.

What a sweet-looking Masspro! Congrats :D

Boy that would sure look good as a gallery in the Typewriter Database (:

This Masspro has found a worthy home. Congratulations.