Two's company, three's a crowd. But do three Typospherians gathered in the kitchen of a Typewriter Museum constitute a Type-In? If so, Canberra staged its first Type-In this evening. It wasn't even vaguely approaching the same league as the impressive gathering of luminaries for the Californian Type-In at Berkeley on Friday, obviously, but it was a lot of unscheduled fun nonetheless.
Fellow Canberra Typospherian Jasper Lindell ("DHIATENSOR") called over to meet, for the first time, Brisbane's Scott Kernaghan ("The Filthy Platen"). Scott and Miss Jane are on a flying two-day visit to Canberra, after having spent Christmas in Melbourne. They are due to start the return journey to Brisbane tomorrow.
With Scott and Miss Jane here to celebrate the relaunching of the Australian Typewriter Museum's displays, Jasper joined Scott and I in an impromptu "Type-In". A wide variety of machines from the displays were used. 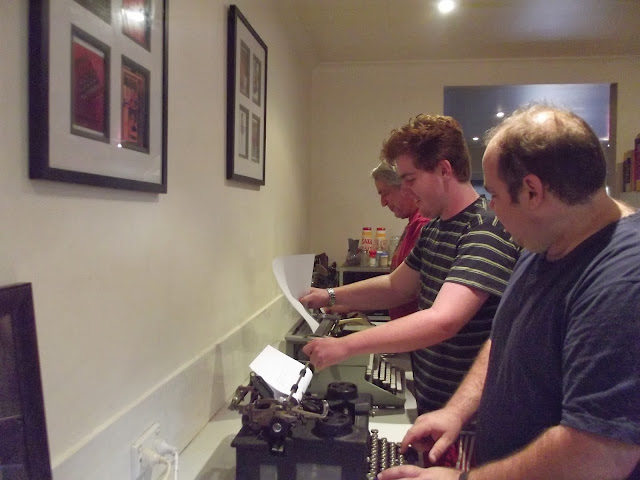 Scott on a Royal 10, Jasper on a Remington International. 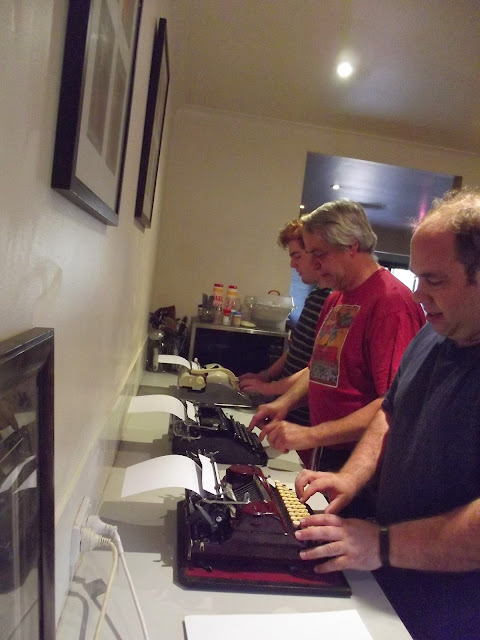 Scott on a Rheinmetall, me on a Hermes 2000 and Jasper on an Alpina. 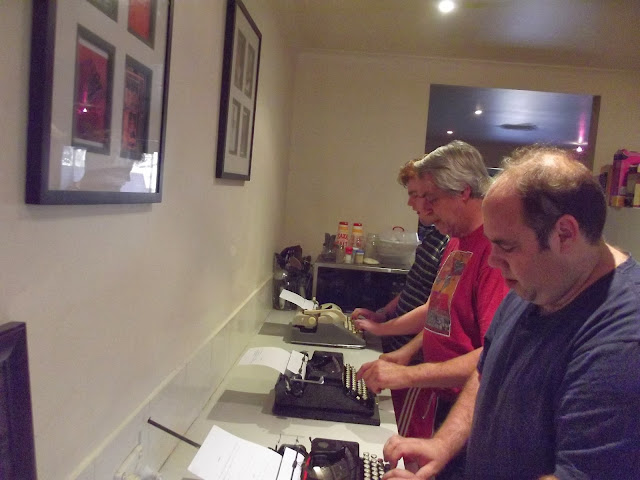 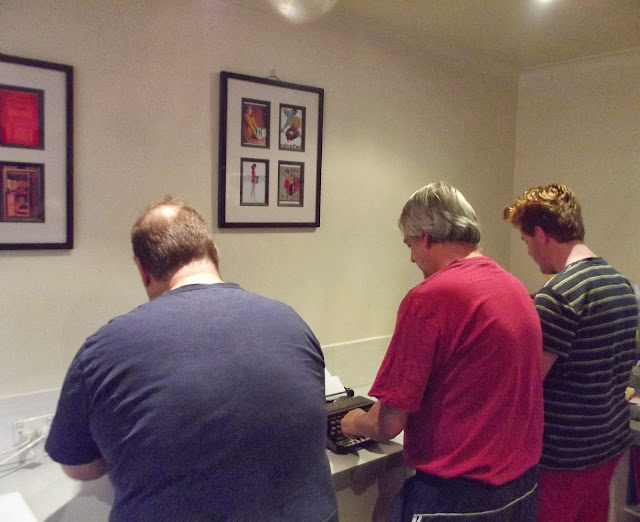 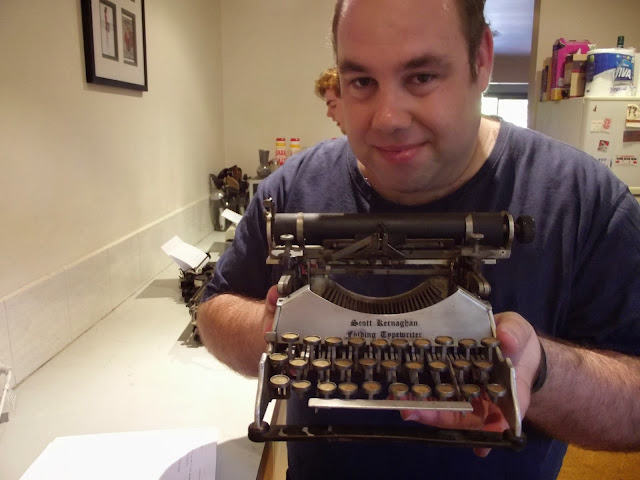 Richard Polt gave me a spare parts Standard Folding when I was in Cincinnati. The decal had worn off, so for the weekend I relabelled it a "Scott Kernaghan Folding Typewriter". Scott seemed amused by my little joke. 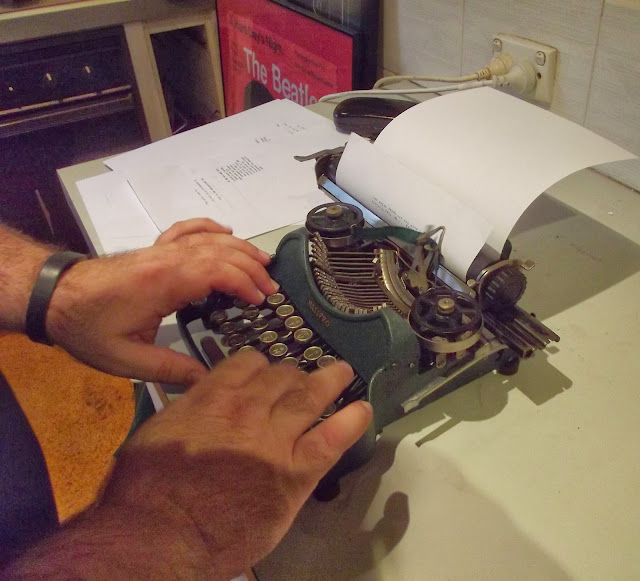 Scott tries out THE Masspro! 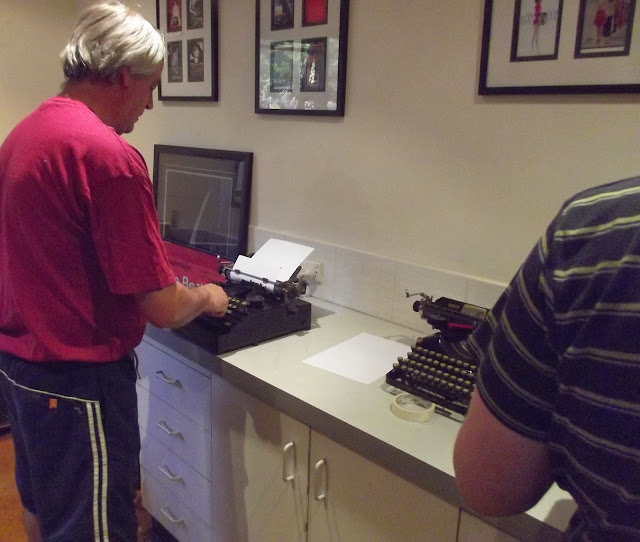 Royal Standard 1 and an unoccupied Senta. 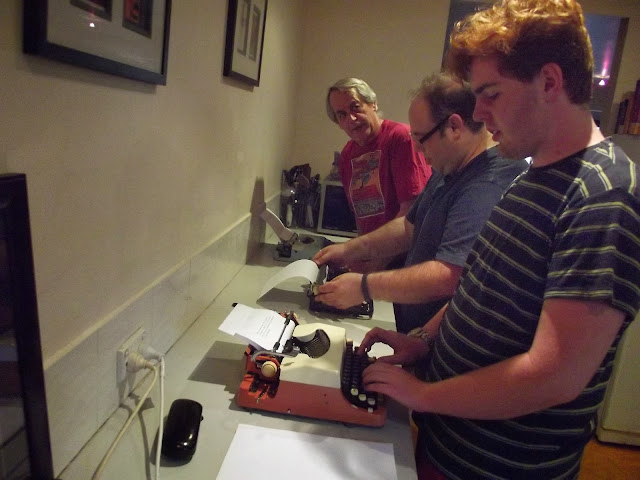 Jasper masters an Imperial Good Companion 7, Scott on an Underwood 3 and me on an Antares Domus.

A big thank you to Miss Jane for photographing and filming this brief but highly entertaining event.
Posted by Robert Messenger at 23:42

I'd forgotten that you have a Senta 4-bank.

The Kernaghan Folding is hilarious!

Gah! Can't half tell I've been sick lately. I look awful! Look at those bags under my eyes! And I could have pickerd a better shirt than my 'about to haul a load interstate' shirt!

But, I had a great time on those machines. Even the sacred Masspro.

Typewriter clatter is as fine a wake up as this coffee beside me. And luminaries! Holy cow, it is great to connect faces (and typing styles) with two more Australian leading lights, Scott and Jasper. And I love the T-shirt concept.

I feel lucky to have met one of these three, looks like a lot of fun! I see a few machines I'd like to try typing on one day. Though this is a small group it looks like an awesome group!

Nice to know Scott has a custom typewriter.

Three Typospherians walked into a bar... it was a Bar-lock. Sorry, bad joke, great post!

I hear Section 2 (5) of the Non-computerised Writing Machines Act (2001) stipulates:

A gathering of like-minded people at a given physical location may be defined as a "type-in" provided the following conditions are met:
1. The purpose of the gathering is primarily for the use and discussion of typewriters
2. The gathering is comprised of 3 or more individuals who may reasonably be expected to enjoy (or quickly learn to enjoy) using typewriters
3. The gathering is advertised publicly through appropriate social media prior to it taking place such that individuals as mentioned in (2) may be duly notified
4. The events and happenings of the gathering are described publicly through appropriate social media such that those who could not attend have the opportunity to see what they have missed out on.
5. The gathering takes place in an indoor location (NOTE: if this condition is not met but the other 4 conditions are met- then the gathering is to be called a "type-out" instead).

the big frame v.s. the small green typewriter, what else can be more amusing? :-P

Clearly an official Type-In because it's listed on type-in.org (: