Cincinnati Dreamin': All the Olympia SM2 Portable Typewriter is Green and the Cairo Rose is Purple 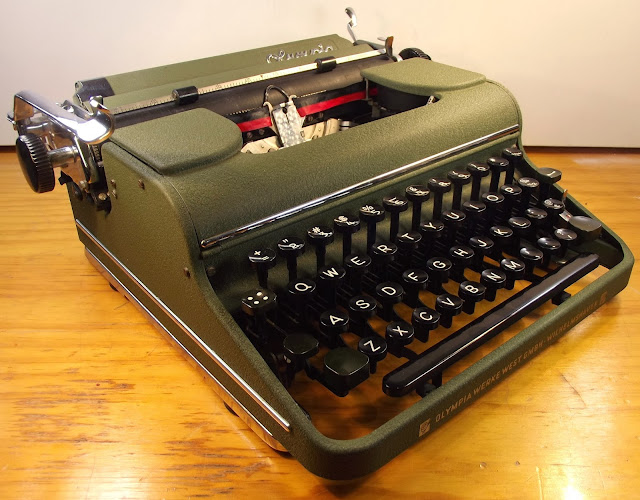 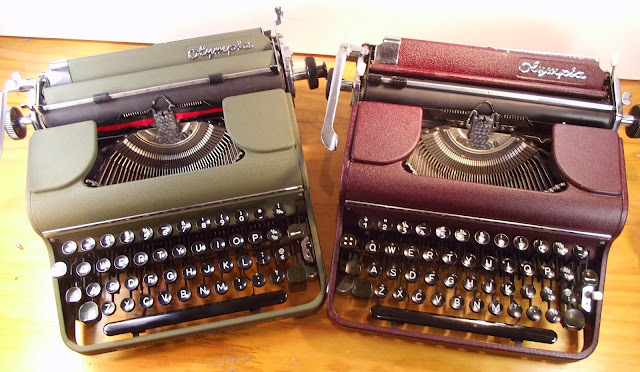 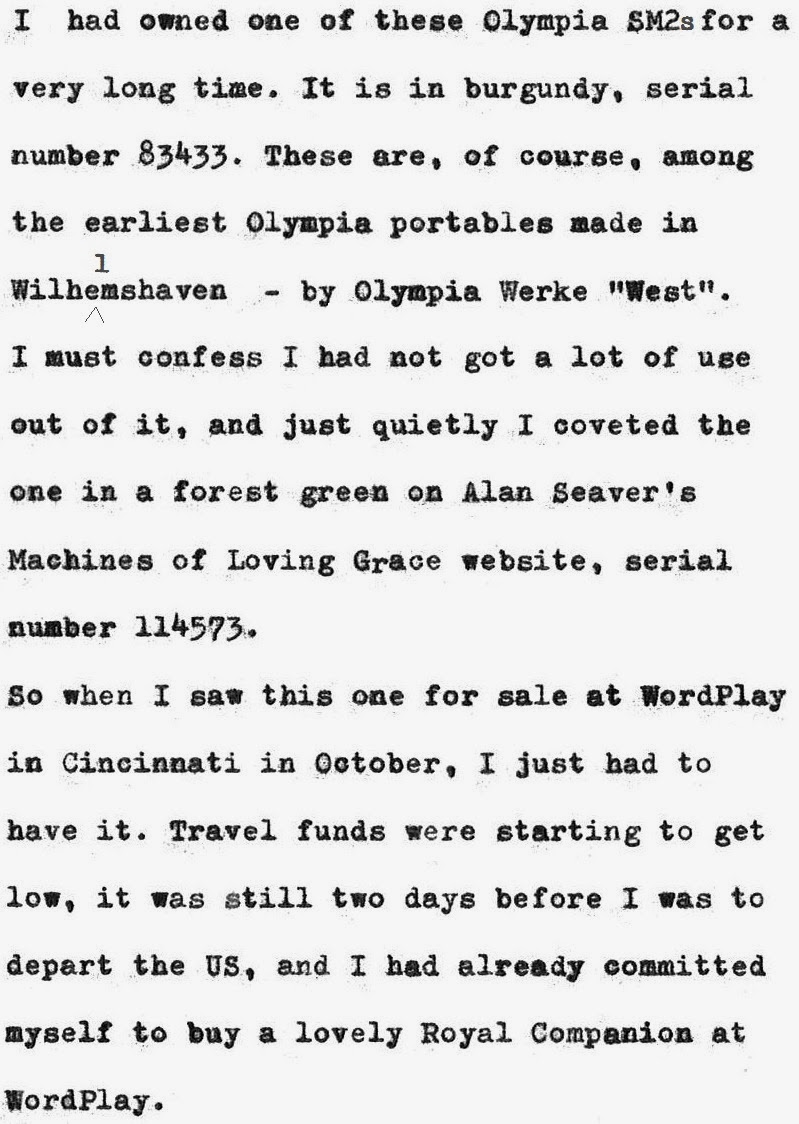 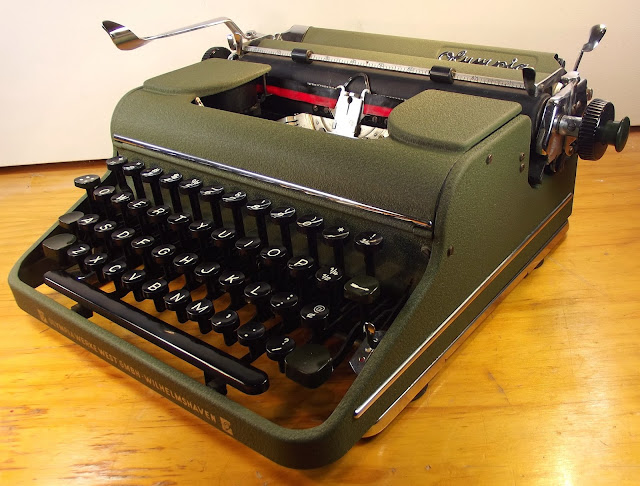 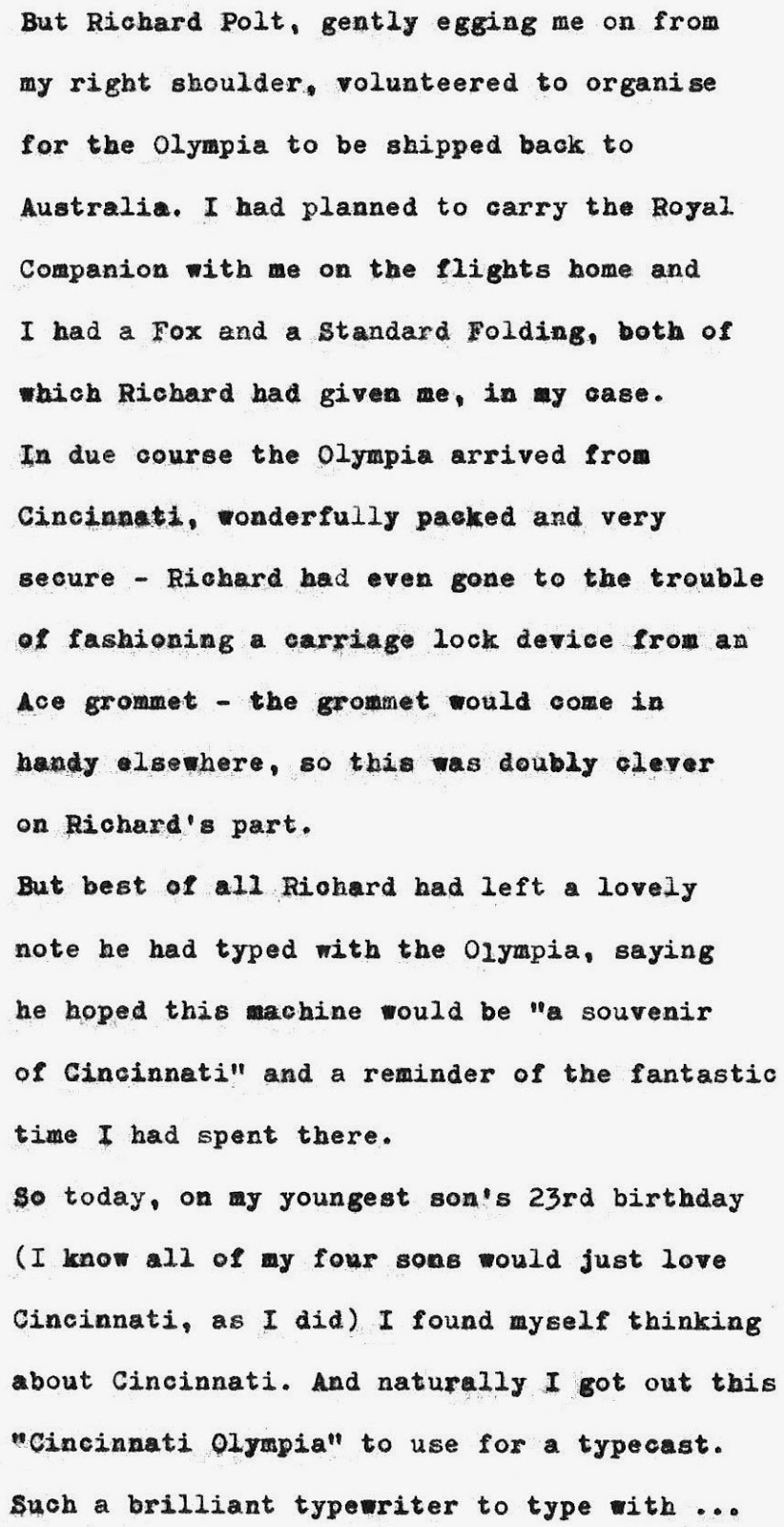 Richard's note left in the platen of the Olympia SM2 for its trip across the Pacific. You can easily tell that Richard has a far lighter typing touch than I do!
I should have pointed put that this is a typewriter Richard himself serviced for WordPlay before it was put on sale there. In other words, it is in tip-top condition. 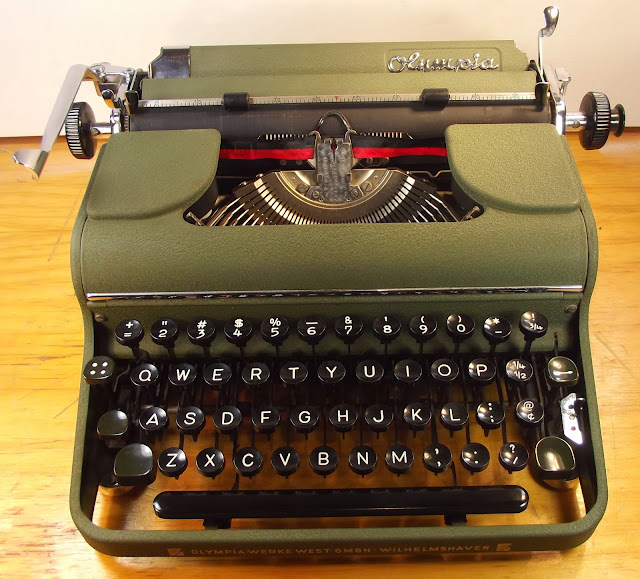 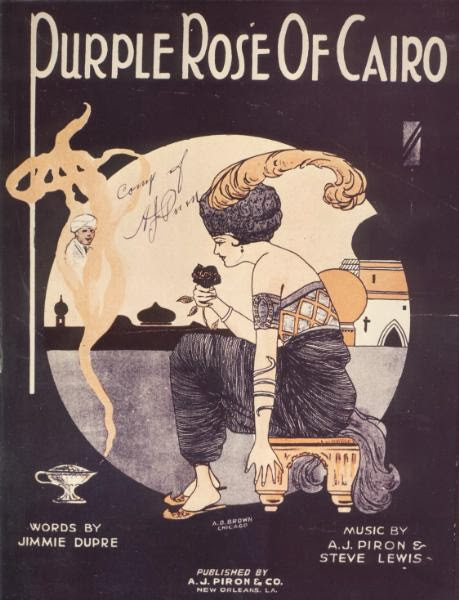 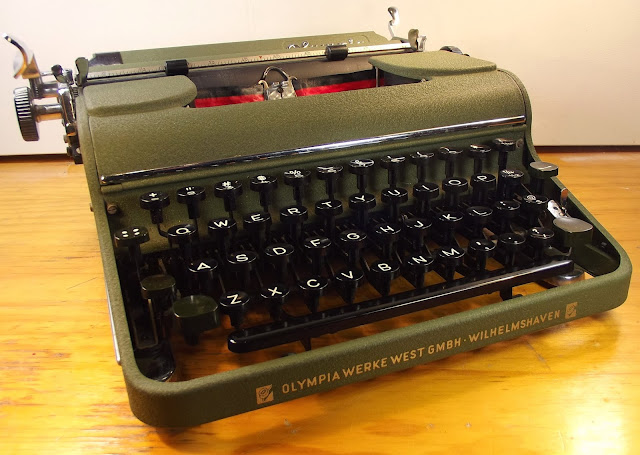 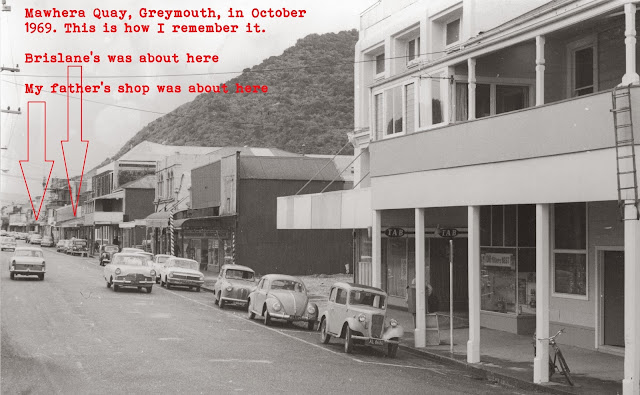 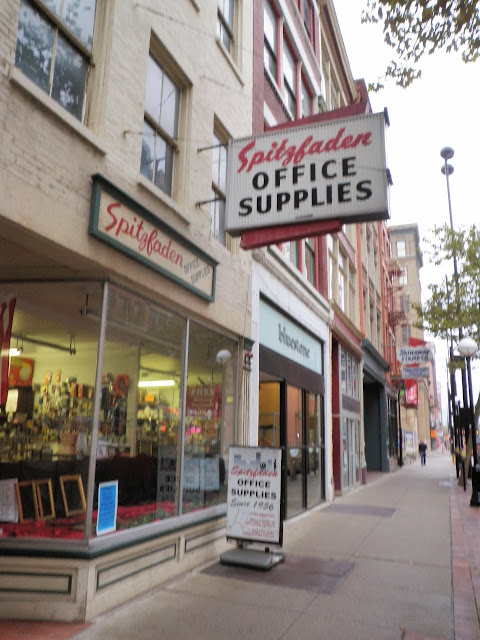 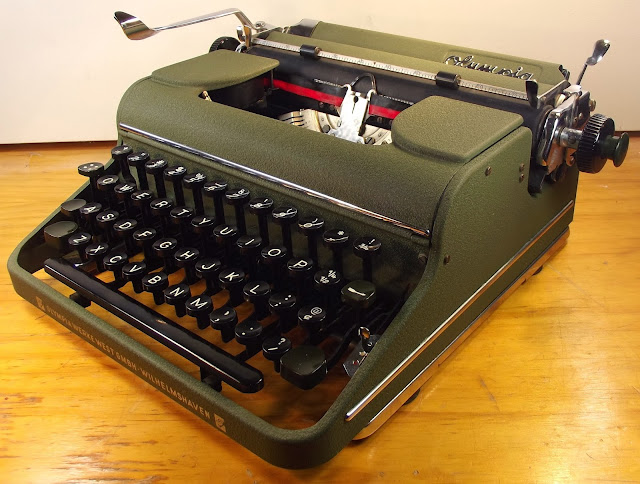 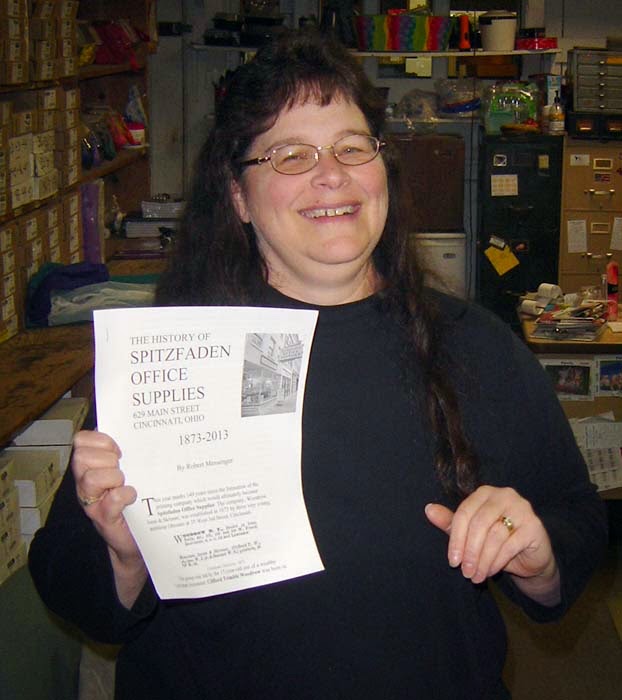 See the history below 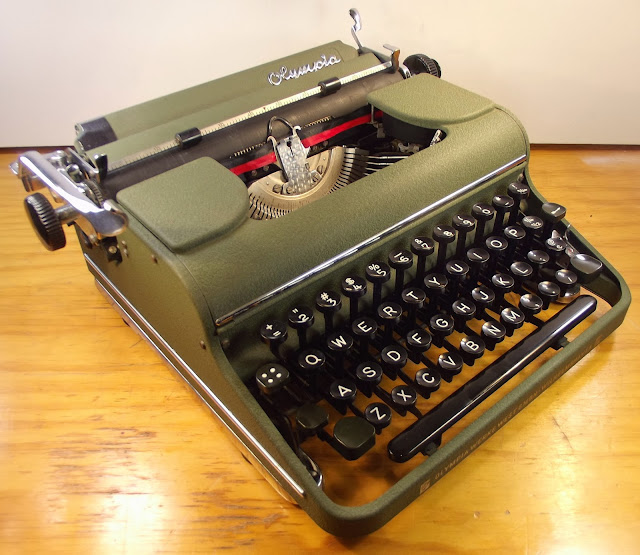 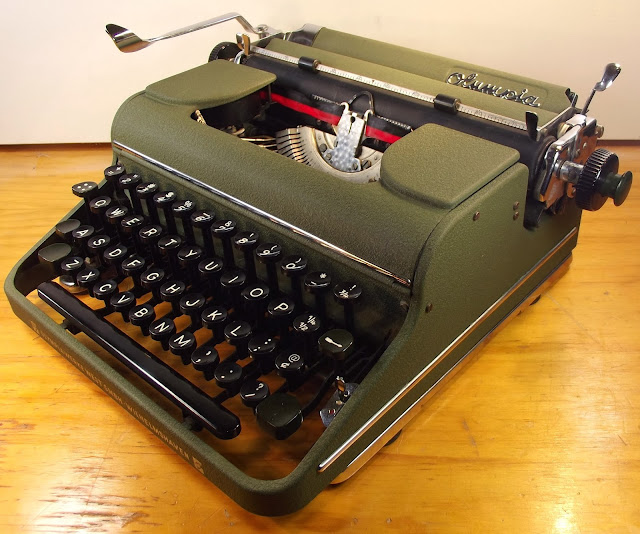 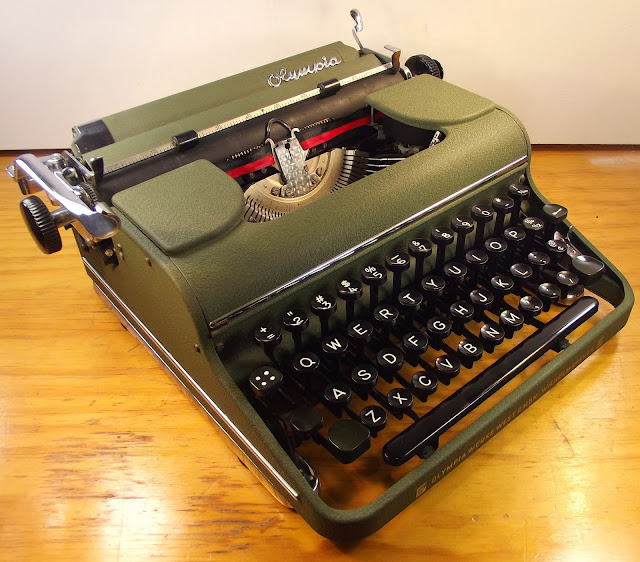 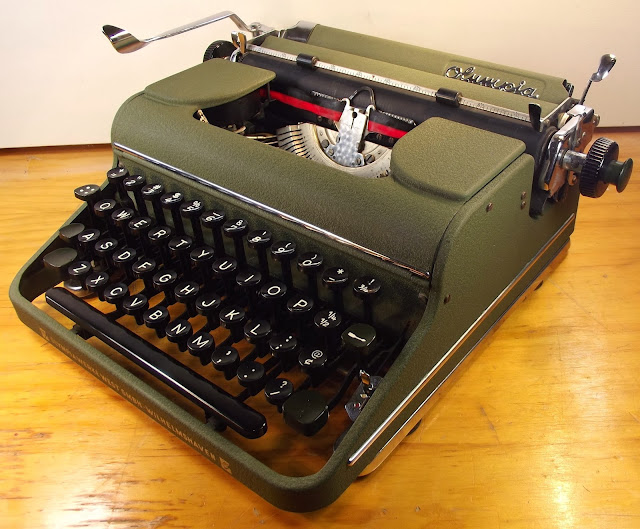 OK, so the SM2 on the right is burgundy, but can I now call it a "purple" "Cairo Rose", to also remember Cincinnati and my "The Purple Rose of Cairo" experiences there?
THE HISTORY OF
SPITZFADEN OFFICE SUPPLIES
629 MAIN STREET
CINCINNATI, OHIO

his year marks 140 years since the formation of the printing company which would ultimately become Spitzfaden Office Supplies. The company, Woodrow, Jones & Skinner, was established in 1873 by three very young, ambitious Ohioans at 35 West 3rd Street, Cincinnati.

Cincinnati Directory, 1873
The group was led by the 17-year-old son of a wealthy Cincinnati ironmaster. Clifford Trimble Woodrow was born in Cincinnati on May 2, 1856, the sixth child and fifth son of David Trimble Woodrow and his wife Louisa. David Woodrow (1812-1892) was a leading manufacturer and iron and steel merchant who had returned to Cincinnati in the year of Clifford’s birth, 1856, after spending the early 1850s as a trader in Maysville, Kentucky. He made stoves, hollow ware and castings, owned an Ironton Iron and Steel Company warehouse and the Clifton Nail Works, was a partner in the Ironton foundry, rolling mill and Howard furnace and was a trustee of the Cincinnati Water Works and Miami University.
Joining Clifford Woodrow in the 1873 printing company venture were Cleveland-born George Winfield Jones and Samuel Wiggins Skinner.
Their partnership did not last long and the next year, 1874, Clifford Woodrow enlisted yet another young man in forming a job printing company at 101 West Front Street, this time Canadian-born James Henry Leland.
Paper, ink, type and printing were very much in Clifford Woodrow’s blood. There were many printers in his family, notably his elder brother, William Howard Woodrow. The Western Reserve Chronicle of Warren, Ohio, reported during the Civil War: "Among the gallant young men who left Warren in obedience to the call for volunteers, and who now form a part of the 84th Infantry Regiment at this time, are two printers of this office. They are W.H. Woodrow and R.P. Leisenring … That they will do their duty, and their whole duty, as soldiers, we have no fears. They have done this as printers, and they will do no less in their new calling.” An uncle, Henry Bascom Woodrow, and his son Samuel Bradford Woodrow, were also printers, as were Clifford’s elder brother Frank Henry Woodrow (1854-1907) and two other family members, James and David.
In 1880 Clifford joined Frank in forming Frank H. Woodrow & Brother, “fine stationers and steel and copper plate engravers” of 16 West 4th Street. Engraving was Frank’s forte while profitably running businesses was Clifford’s. By 1889 Clifford had formed another company, Woodrow, Baldwin & Company (with Walter Baldwin and T.A. Hayes), “stationers, printers and blank book manufacturers” of Walnut Street. This was Clifford’s first venture into office supplies.
Clifford Woodrow was a rather flamboyant man for his time. When he was married, to Margaret Andrews “Pinkie” Tillman, in Louisville, Kentucky, on June 4, 1890, newspapers reported:
“A Wedding Tour In Coach. Mr Clifford Trimble Woodrow, a leading society man of Cincinnati, and Miss Pinkie Tilman, daughter of Banker Tilman, of Louisville, Kentucky, were married in the latter city recently. The same evening they started out on their wedding tour in one of the most remarkable equipages ever seen in Louisville. It was a huge four-seated carriage, painted yellow, with oak trimmings, and covered with a yellow leather ‘surrey top’. It was drawn by two horses, the one snow white and the other as black as the traditional ace of spades, both handsomely caparisoned in harness of fail leather, with silver trimmings. In this conveyance Mr Woodrow and his bride made their wedding tour. They proceeded to Cincinnati in a leisurely manner, driving only between sunset and midnight." 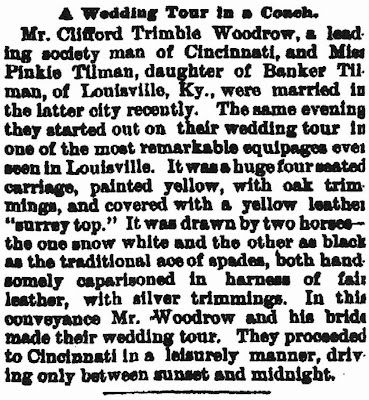 For many years after her marriage Margaret “Pinkie” Tillman Woodrow ran the Cincinnati Women’s Exchange, an organisation formed in March 1883 which enabled poor women to sell items to “ladies of means”.
In 1895 Woodrow, Baldwin & Co became the Woodrow-Ryder Company, with Clifford as president and Thomas W. Ryder his new partner. By 1899 this had become the Woodrow Stationery and Printing Company, with Frank Woodrow as engraving manager – the company also made die sinkers. In 1909 Clifford owned this company outright, but in 1912 he took on a new partner in E.A. Bradley, and later S.A. Scott (while retaining the Woodrow-Bradley name). Scott continued to work for Woodrow into the late 1920s.
The major change came in 1927, when Clifford Woodrow merged his stationery company with those of two other leading Cincinnati stationers, William Harrison Stanage (born Cincinnati, December 14, 1876) and Gustav Adolph Weil (born Cincinnati, April 27, 1873) to form Woodrow-Weil-Stanage. Woodrow was president of the new organisation, with Stanage and Weil vice-presidents. The merger meant the company had one main office, what was formerly Stanage’s at 119 East 6th Street, but three salesrooms – Woodrow’s at 726 Main Street (now the Ohio Book Store), Weil’s at 16 East 12th Street and Stanage’s at 121 East 6th Street. Woodrow-Weil-Stanage justifiably used the advertising line of "Cincinnati's leading stationer".

Cincinnati Directory, 1926
The Weil company was known as Max Weil & Company, but the proprietor was Gustav Weil. New York-born Max Weil (1872-1927) may have been the major original investor, but he was elsewhere heavily involved, in cotton goods manufacturing in Cincinnati. It is not known how these two Weils were related. 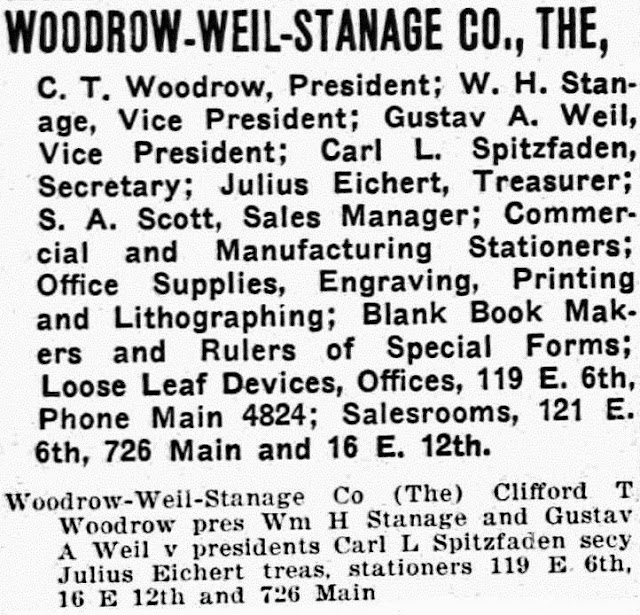 Cincinnati Directory, 1928
Carl Louis Spitzfaden had been secretary of Stanage’s company since 1916, and with the merger he took over the same role with Woodrow-Weil-Stanage. A bookkeeper by training, Spitzfaden had in 1907 been a clerk in the auditor’s office of the Cleveland, Cincinnati, Chicago and St Louis Railway, before branching out on his own. He was also a director of the First National Bank of Mount Healthy and treasurer of the Mount Healthy Saving and Loan Company.
Carl Spitzfaden was born in Springfield, Ohio, on February 20, 1884, the eldest child and only son of Michael A. Spitzfaden and his wife Rosalie (“Lizzie”). Michael Spitzfaden was born in the Palatinate region of south-western Germany in 1854 and immigrated with his family to the United States the next year.
Carl L. Spitzfaden was promoted from company secretary of Woodrow-Weil-Stanage to also take on the roles of treasurer and sales manager. Clifford Woodrow died on December 26, 1931, and was succeeded by William Stanage as company president.
In 1939 Spitzfaden took over the firm from Stanage, reorganised it and renamed it Carl L. Spitzfaden Incorporated, now headquartered at its present address at 629 Main Street. (Using the former company’s goodwill, built up over 12 years, Spitzfaden also retained the name Woodrow-Weil-Stanage, at the same address. The telephone number PArkway 1885 was also retained.) 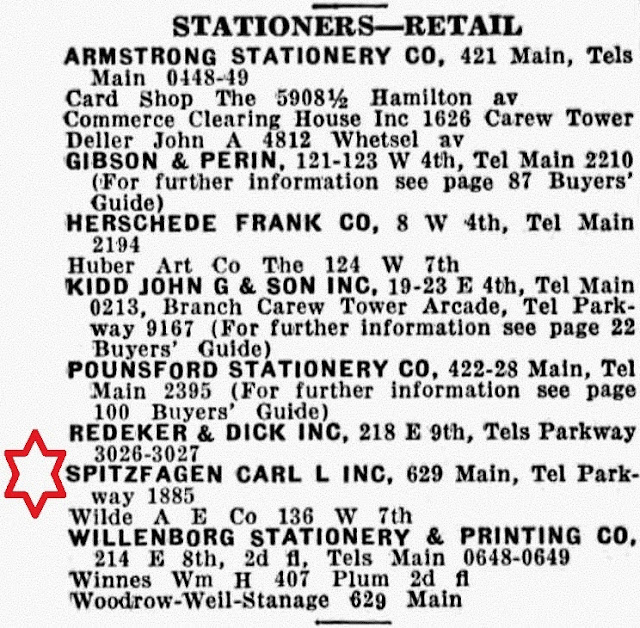 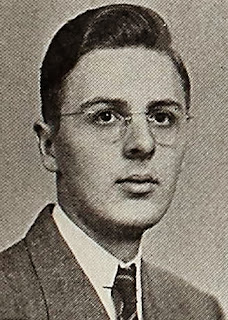 Carr S. Spitzfaden
The couple had one son, Carl (later Carr) Stewart Spitzfaden (born Cincinnati, March 29, 1919; died Cincinnati, November 15, 1999, aged 80). After the death of his father, Carr Stewart Spitzfaden took over as president of Carl L. Spitzfaden Incorporated, with Mrs Edith M. Kenny, of Covington, Kentucky, as secretary-treasurer. Her husband, John J. Kenny, was a salesman with Spitzfaden's.
William Harrison Stanage, the last survivor of the Woodrow-Weil-Stanage merger of 1927, died in Cincinnati in 1954. 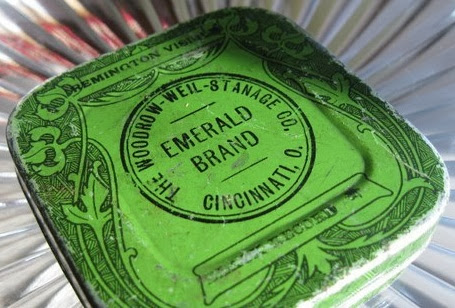 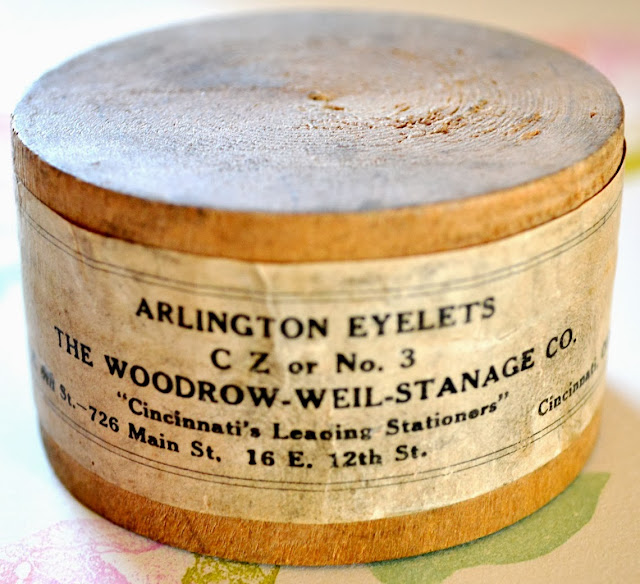 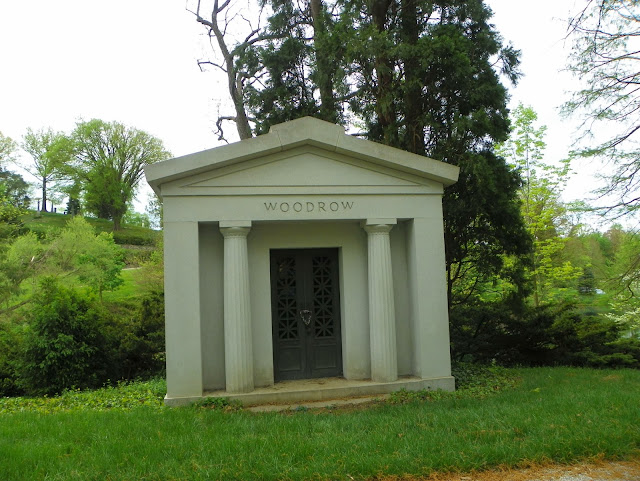 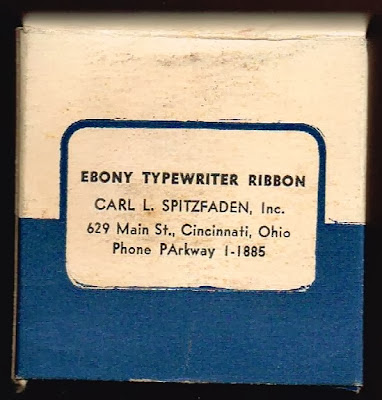 Posted by Robert Messenger at 14:47

Indeed you do splat those impressions onto the page. You may have a heavier touch than Richard's, but it is very even. Hard to believe his note came from the same machine. Some detailed font forensics may sort that out.

Great typewriters and great story - reminded me of the shops and the comics of my boyhood. I was an avid reader of The Victor and The Hornet (good names for typewriters!). :)

OK, forensic study completed, and the conclusion is that the two specimens were indeed produced with the same machine, based in part on the "t" impacting just a scosh high in each sample. Perhaps you inadvertently clicked the button on the SM2 that bolds the text.

In your velour jacket from House of Adam, you were indeed the Purple Rose!

Good to see the Olympia in action. Your history of Spitzfaden's was, of course, very well done, and I've added a link to it from my story on "Cincinnati's typewriter row."

OK, your jacket was blue, so you were the Blue Rose of Cincinnati. :)