One Hundred Years Ago This Christmas: Raymond Koessler and his Simplex Typewriter 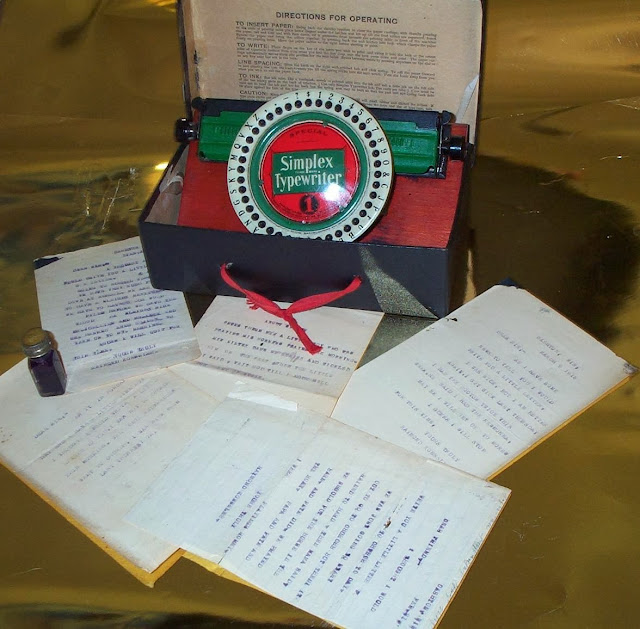 For Christmas 1913, Raymond Koessler, aged nine, of Cashton, a village in Monroe County, Wisconsin, got from Santa Claus a Simplex Special No 1 typewriter. He had mastered the use of this wonderful little machine by January 16, 1914, when he wrote to a German-speaking uncle in La Crosse, 24 miles west of Cashton on the Mississippi River: 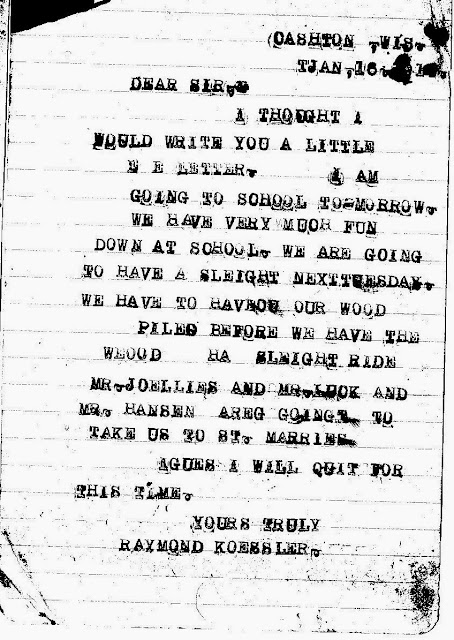 St Mary’s is a Catholic church on the Monroe County Highway just out of Cashton. Raymond was a good, God-fearing little soul, himself of German stock. Best still, he was blessed with a fertile imagination. He started to use his Simplex to write what he called his “About Stories”: 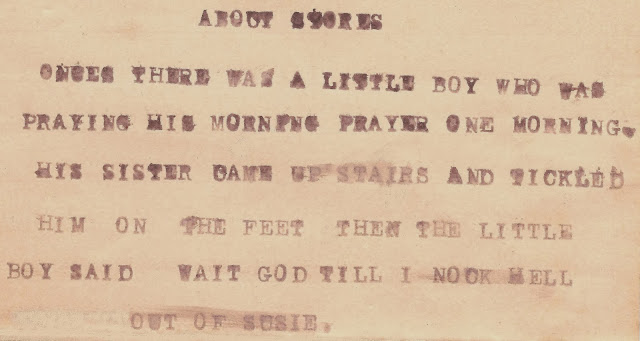 Susie wasn’t Raymond’s sister, she was the figment of a bright young mind, one already well capable of composing charming little notes and letters, if occasionally lacking in spelling skills.
On February 21, 1914, Raymond wrote another letter: 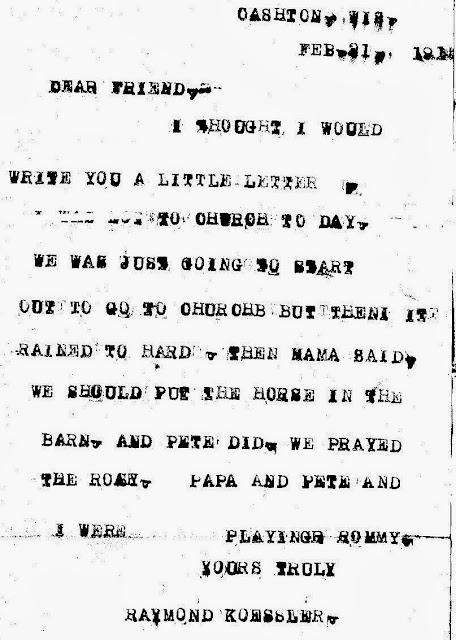 Mama was Anna, nee Hauser, of Tony, Wisconsin, whom Anton Koessler had married in 1889.
In early March 1915, the Wisconsin winter had had its effect on Raymond, who became seriously ill and was confined to bed. He took some comfort in writing on his Simplex on March 9: 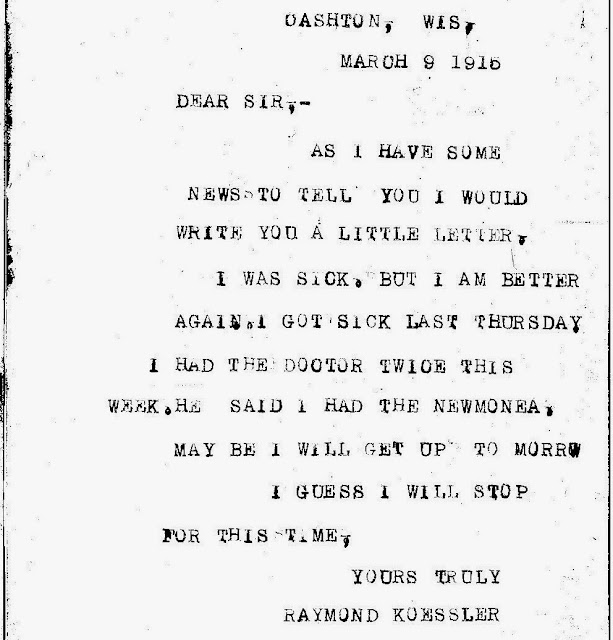 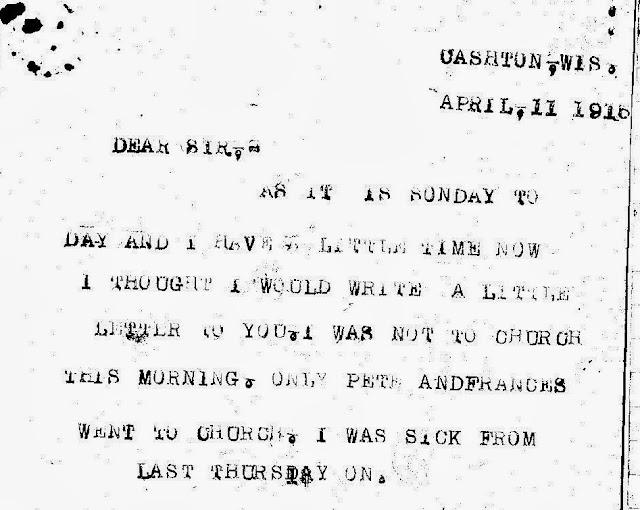 As Raymond’s body weakened, his mind seemed to become more agile. In December 1915, with his sister Frances showing an interest in a member of the Von Ruden family, Raymond wrote an odd little note to Santa Claus, about the children who were looming as his prospective relations by marriage:

I now own Raymond’s Simplex Special No 1 typewriter. I won it on an eBay auction. It came to me in almost perfect condition, except for a small ink stain on its wooden base. The paint has not worn in the least, and its black box looks almost as new as it did that 1913 Christmas Day morning when Raymond first opened it on his family’s farm. It came with the tiny ink bottle Raymond used, and, best of all, it came with all his letters and notes. Raymond’s Simplex takes pride of place among my collection of toy typewriters.
I wanted to know more about the boy who had once owned my Simplex Special No 1. So I contacted Jeanne Hesselberg, a photographer and writer from nearby Sparta. She kindly put me in touch with Dr Jim Brown, a Wisconsin rail historian, who passed my query on to Jarrod M. Roll, the Monroe County historian at the Monroe County Local History Room and Museum in Sparta.
Jarrod Roll was extremely helpful, sending me details about the Koessler family and Anton’s obituary. Jarrod deeply saddened me, however, by telling me Raymond had died, in the year of the Spanish flu epidemic, 1918, aged just 14. 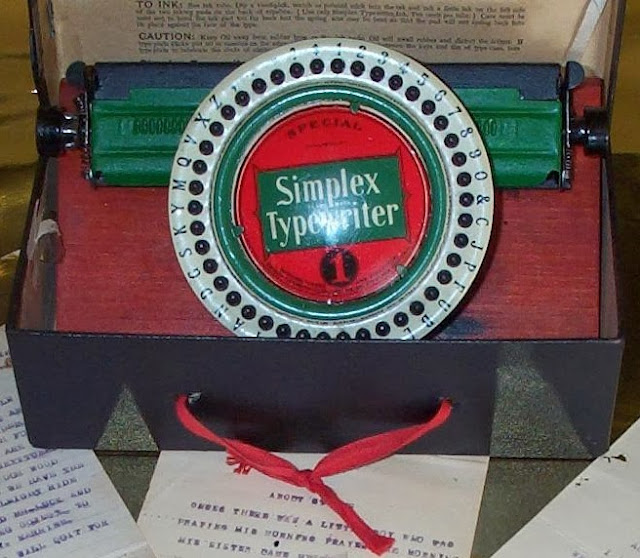 Posted by Robert Messenger at 23:28

a profoundly sad end to a budding typist. Poor fellow.

Very very sad story. You have such a wonderful treasure of a glimpse into the life of a young fellow from long ago. Nice to know Raymond lives on through his letters.

What an incredible find. Good work on tracking down the origins of the machine. Like many of my machines, I have wondered what stories it has told, and who and what had been written on it. In some ways this is beautiful.
For the length of time that he was ill, I woudn't suspect the Spanish flu - but that said, that flu would have killed anyone with a weakened immune system. Maybe a timely reminder to people in the northern hemisphere to get their vaccination for the flu for the year.

What a beautiful, yet poignant story. I can imagine his parents keeping the toy typewriter and the little notes he left behind as a reminder of their son. That explains why it looks so unused - nobody used it again, until you adopted it.

I've always thought that collecting anything (typewriters, radios, watches, etc.) is a way to preserve the history of technological advancement, but it's also a very solid way to get in touch with the past. We seldom know the name of the previous owner of a typewriter, let alone the identity of the original owner. But when we use their machines, when we keep them working and preserve them, in a way we are also helping these people remain among the living.

I like that old expression, "the departed ones only truly die when they are forgotten". With this little post, Robert, you've given Ray Koessler the gift of immortality. May our writings do that little miracle for ourselves, too!