Efficiency Itself: The Antares Portable Typewriter That Inspired the Olivetti Valentine 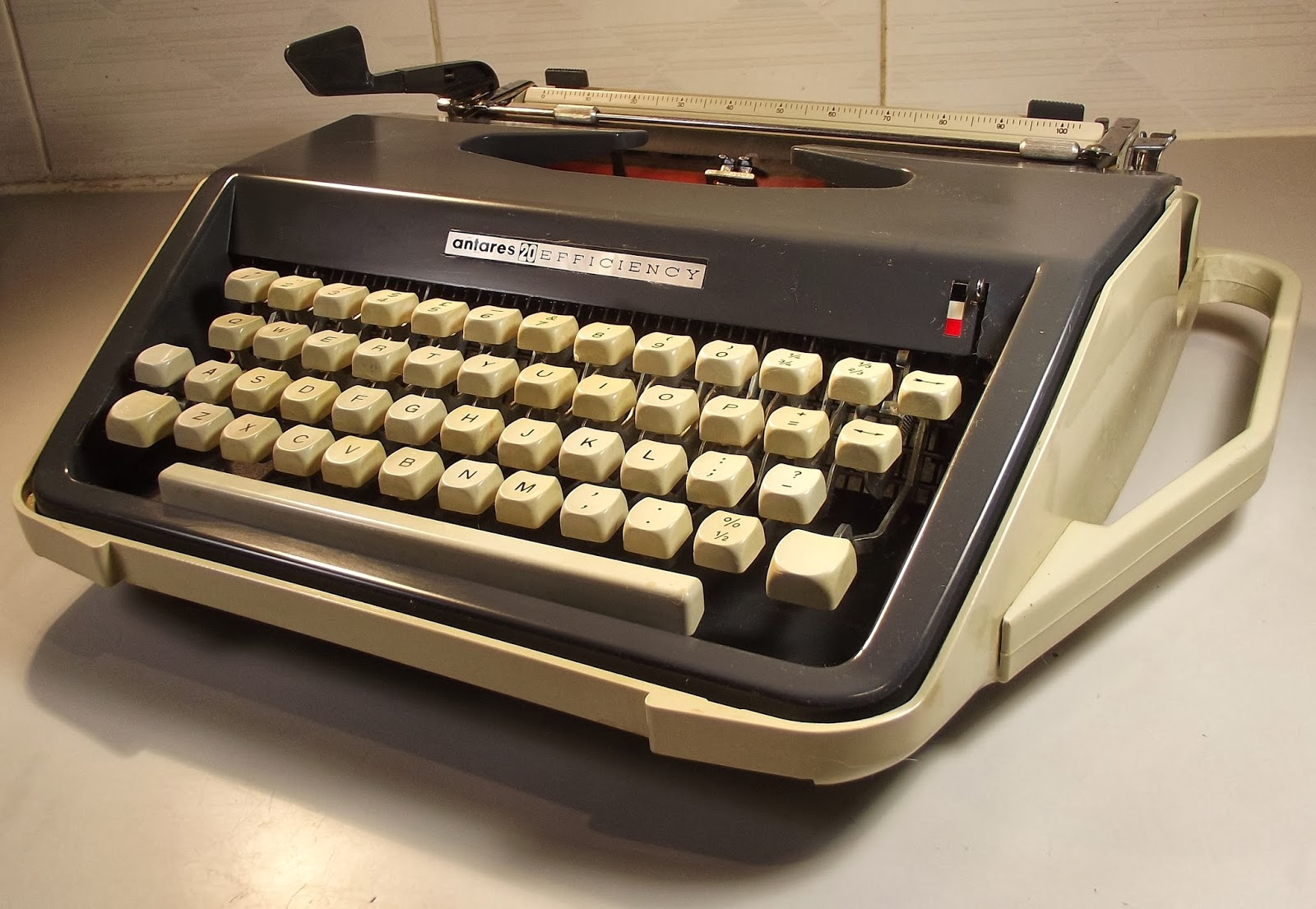 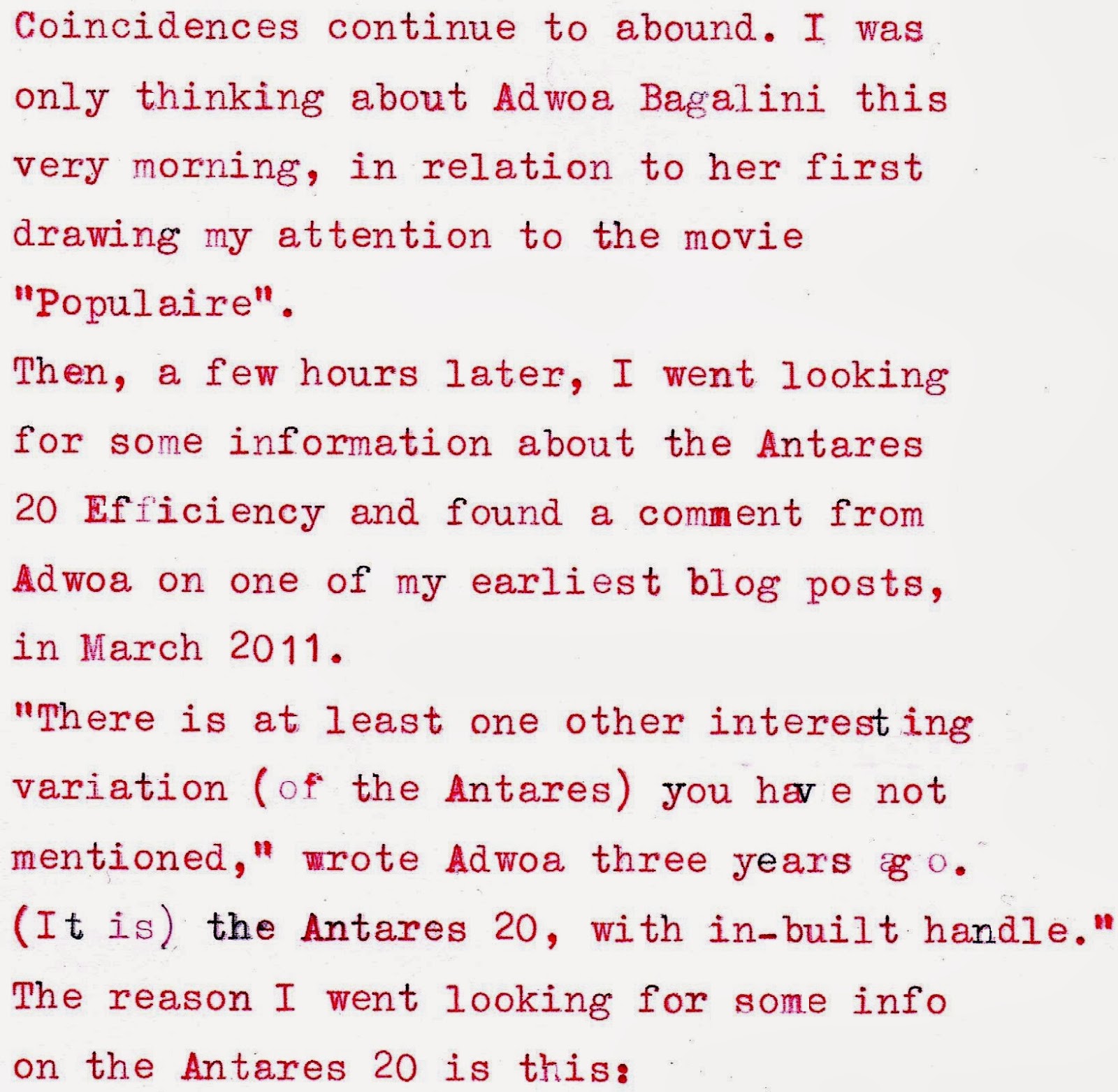 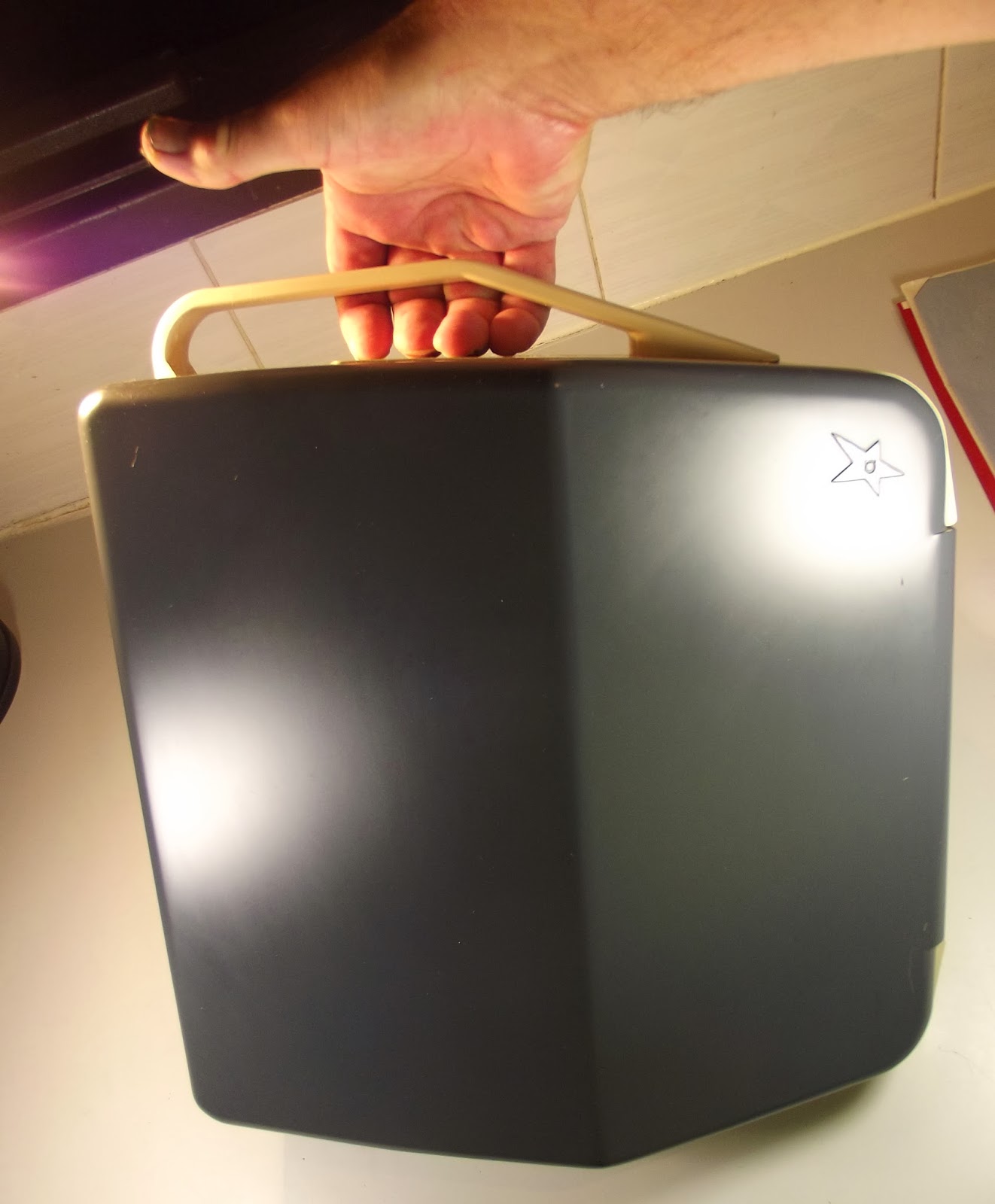 This evening I had to drive over to Fyshwick to renew the registration of the ATM as a business name. When I got there I was told I had to do it online, that the office I have been going to for the past nine years doesn't handle such things anymore.
Having gone to the trouble of going over there, I thought I might as well pop into the Down Memory Lane bric-a-brac store on Geelong Street, right next door. It's a long time since I've been there and Chris Lund, who runs the store, usually has typewriters for sale, though seldom anything of any special note.
When I walked in I noticed she had a nice US-made Smith-Corona 5 Series portable with manual and brochure, along with an Olympia Traveller De Luxe and a Nakajima Imperial. I wandered around the cabinet to see if anything else was hidden away - and then I saw it. At first I didn't think it was a typewriter - the case looked like no typewriter case I had ever seen before. But the $35 price tag said "typewriter", and I could make out the Antares logo on top, so I sat down and opened the case ... 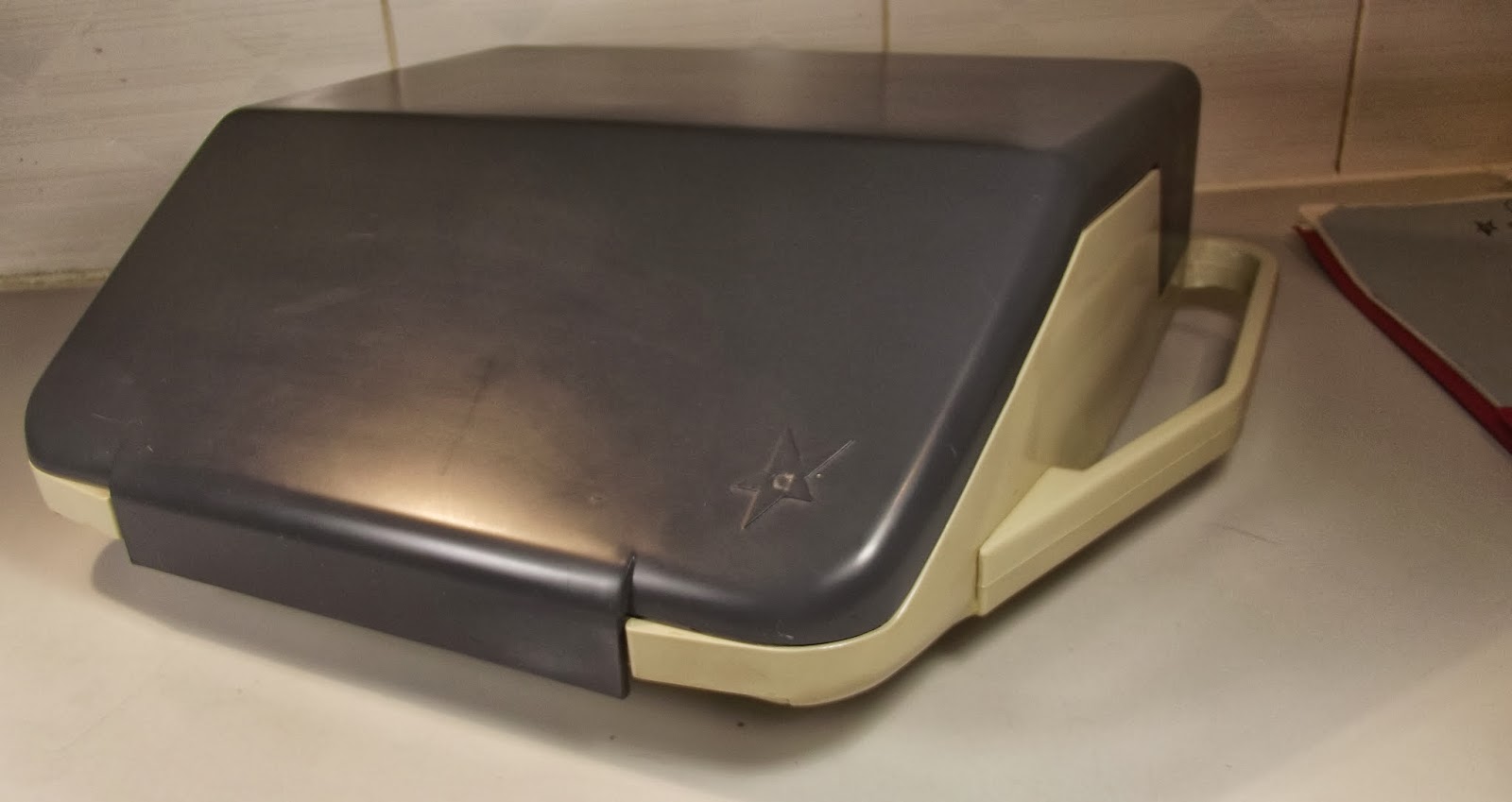 My first thought was Carlos Grassi. I knew Grassi had designed an unusual portable typewriter case for Antares, and that it had inspired Ettore Sottsass's 1969 design of the Olivetti Valentine and its case. 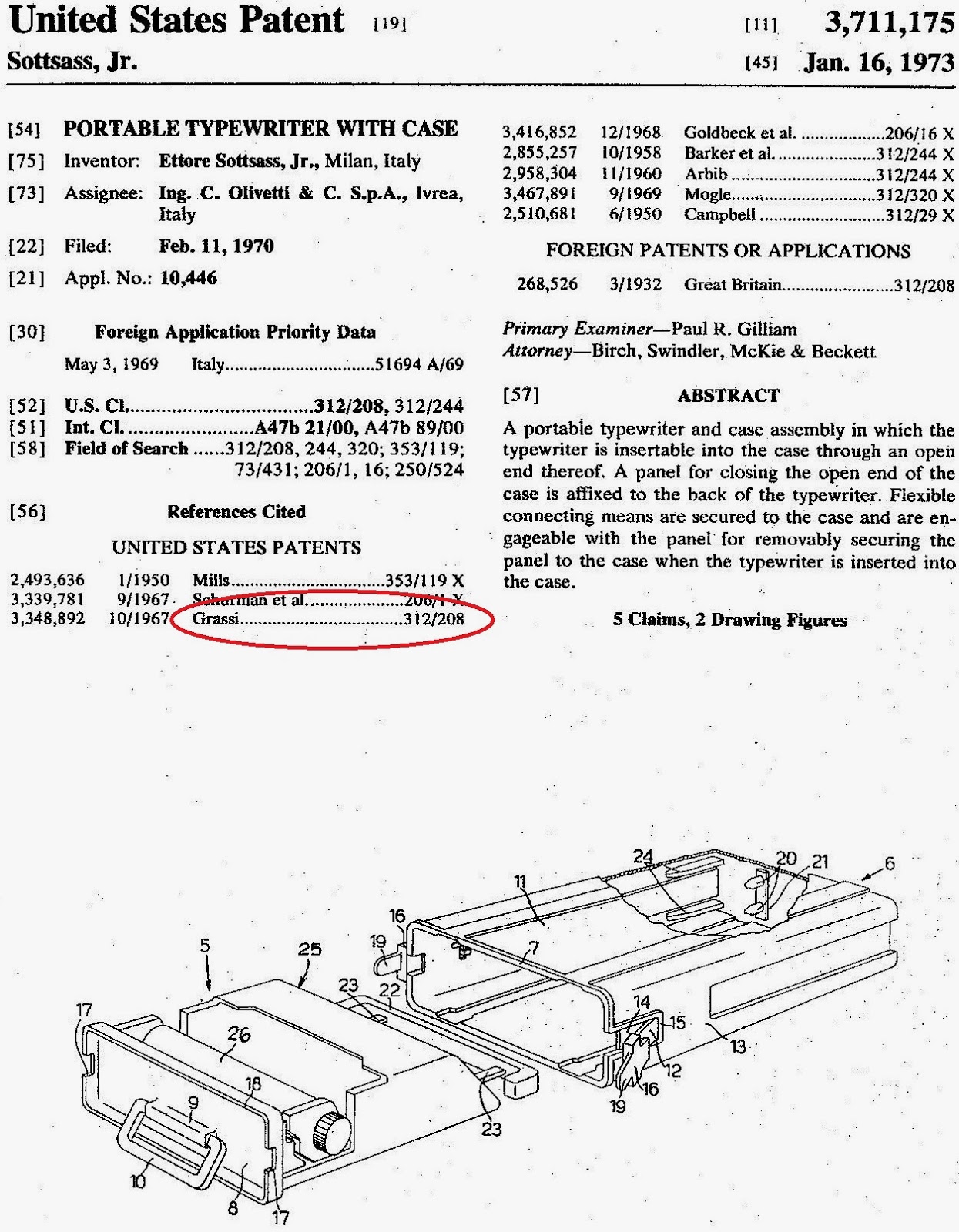 But, to be honest, I couldn't recall a handle in Grassi's design - all I had was a vague recollection of it showing a tray underneath the machine. Sure enough ... 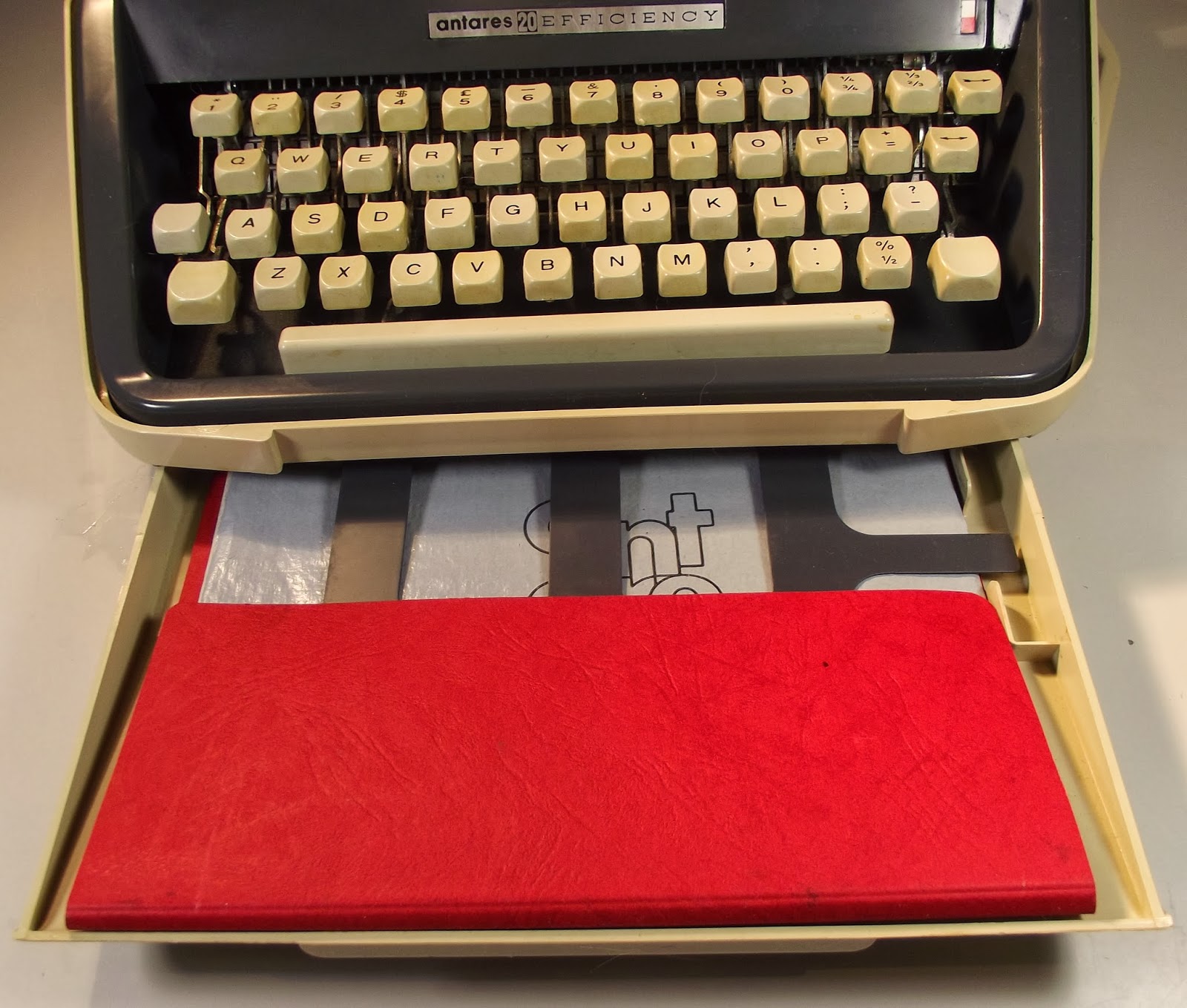 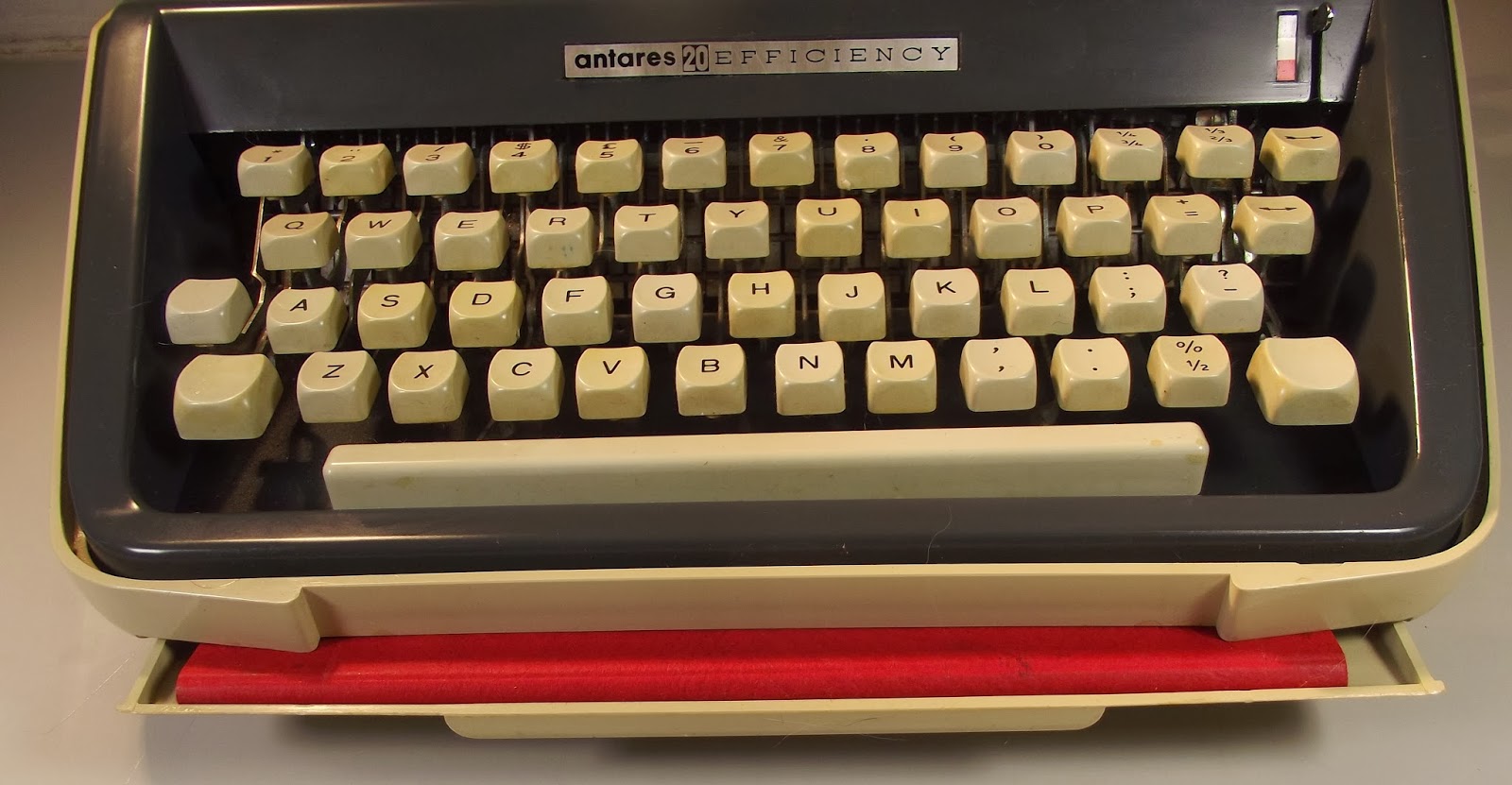 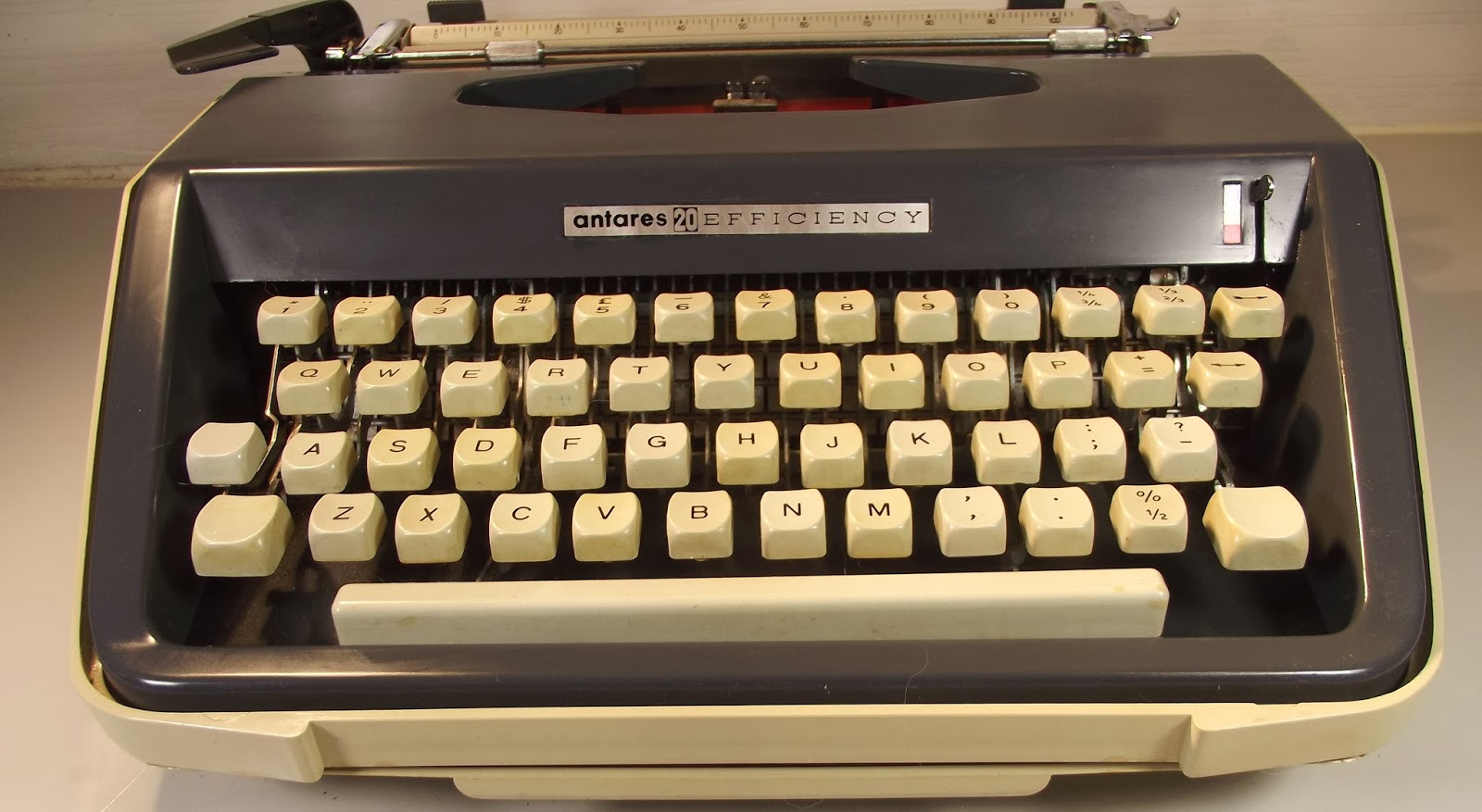 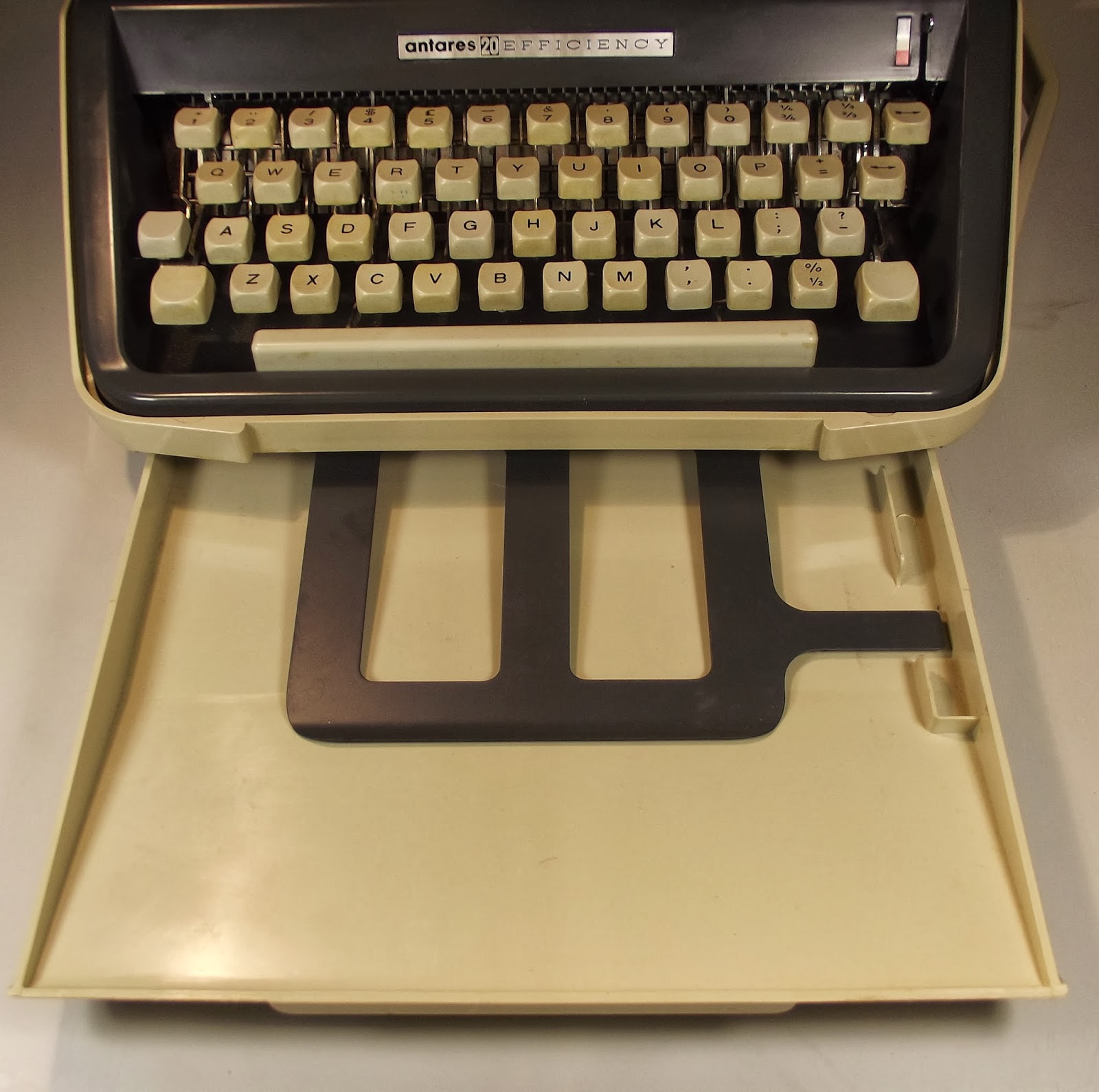 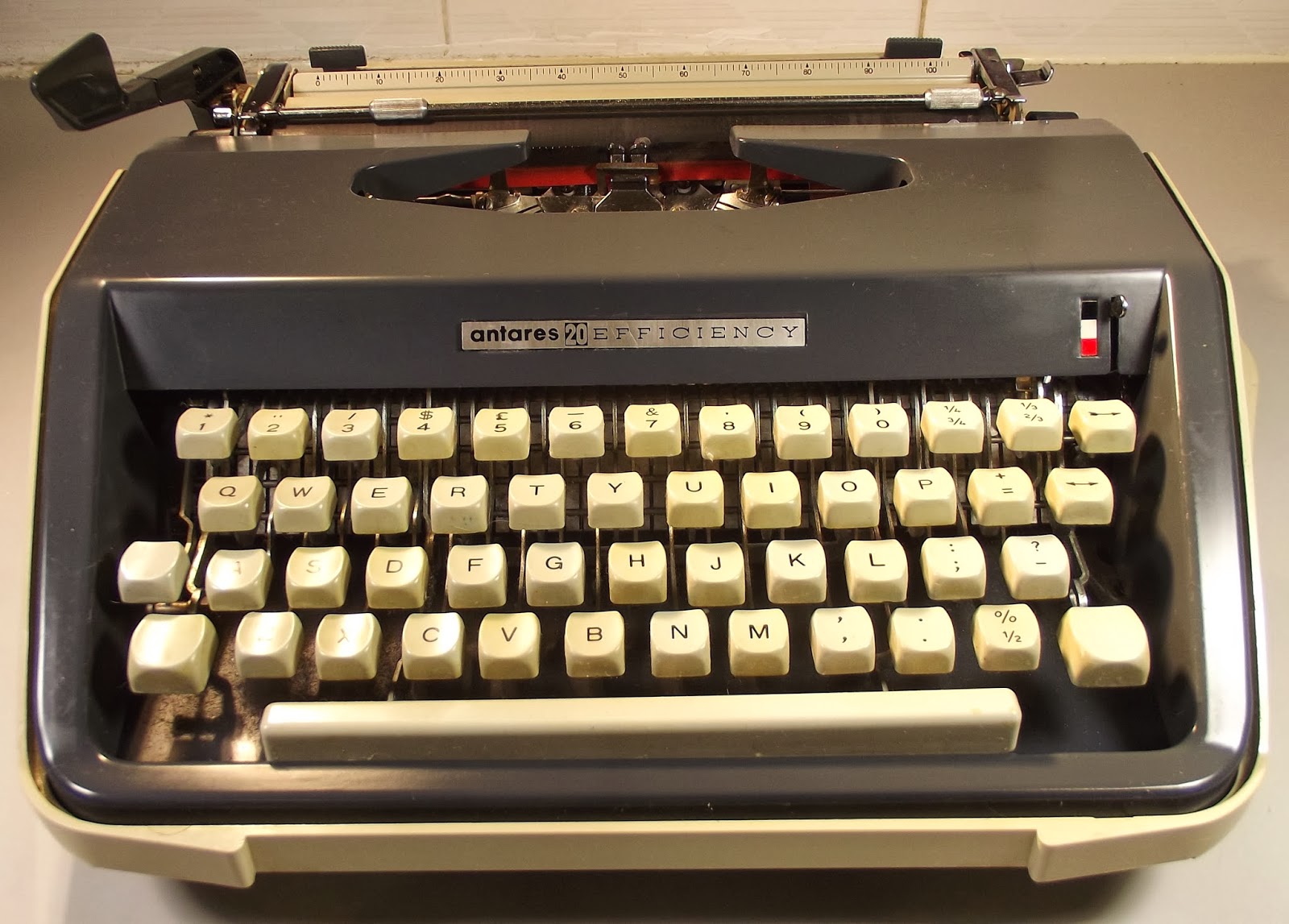 The tray, which slides in under the front of typewriter, is to hold typing paper and carbon paper. Mine came with an Antares-logoed supply of both, under the sprung metal shield: 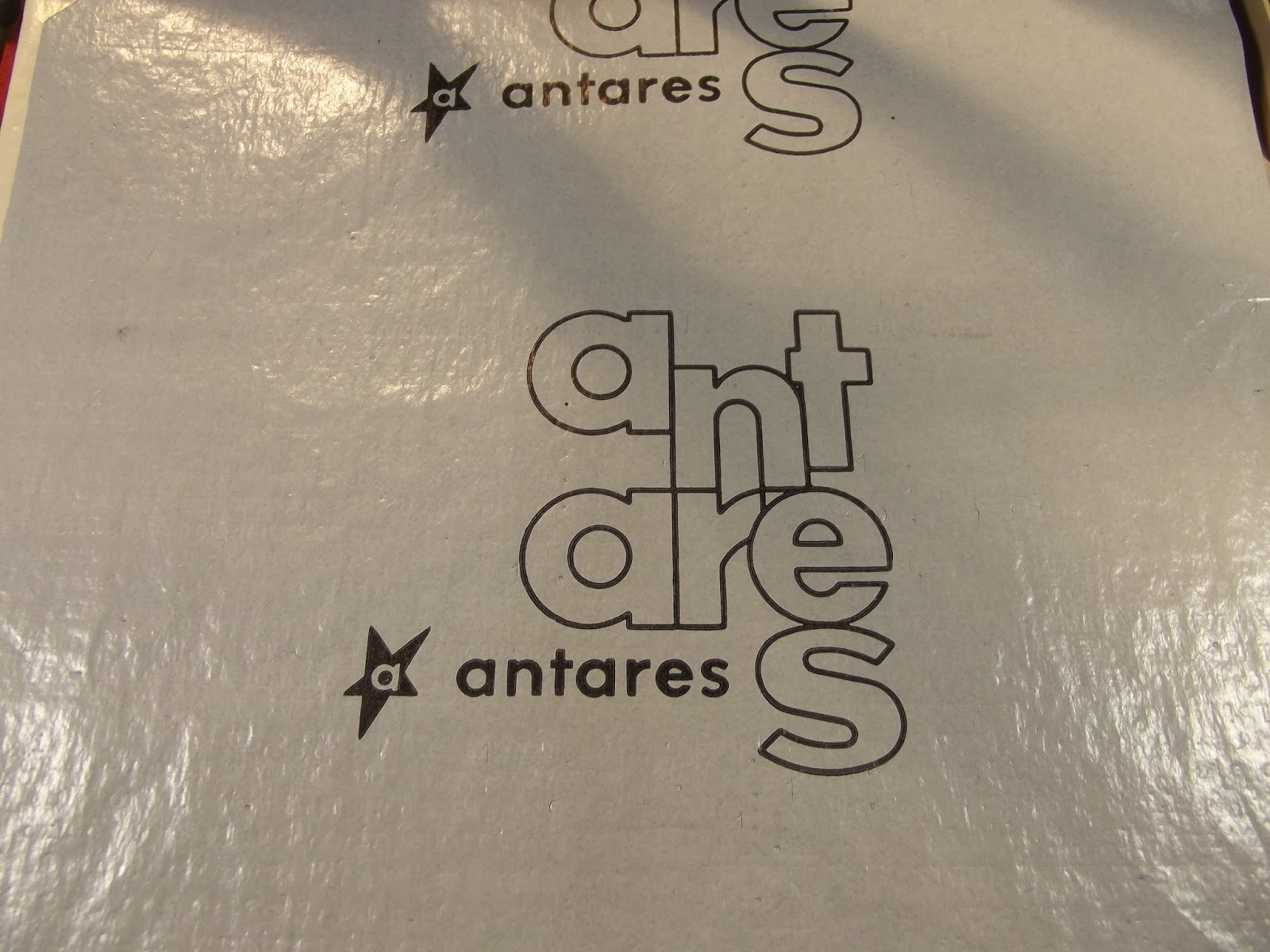 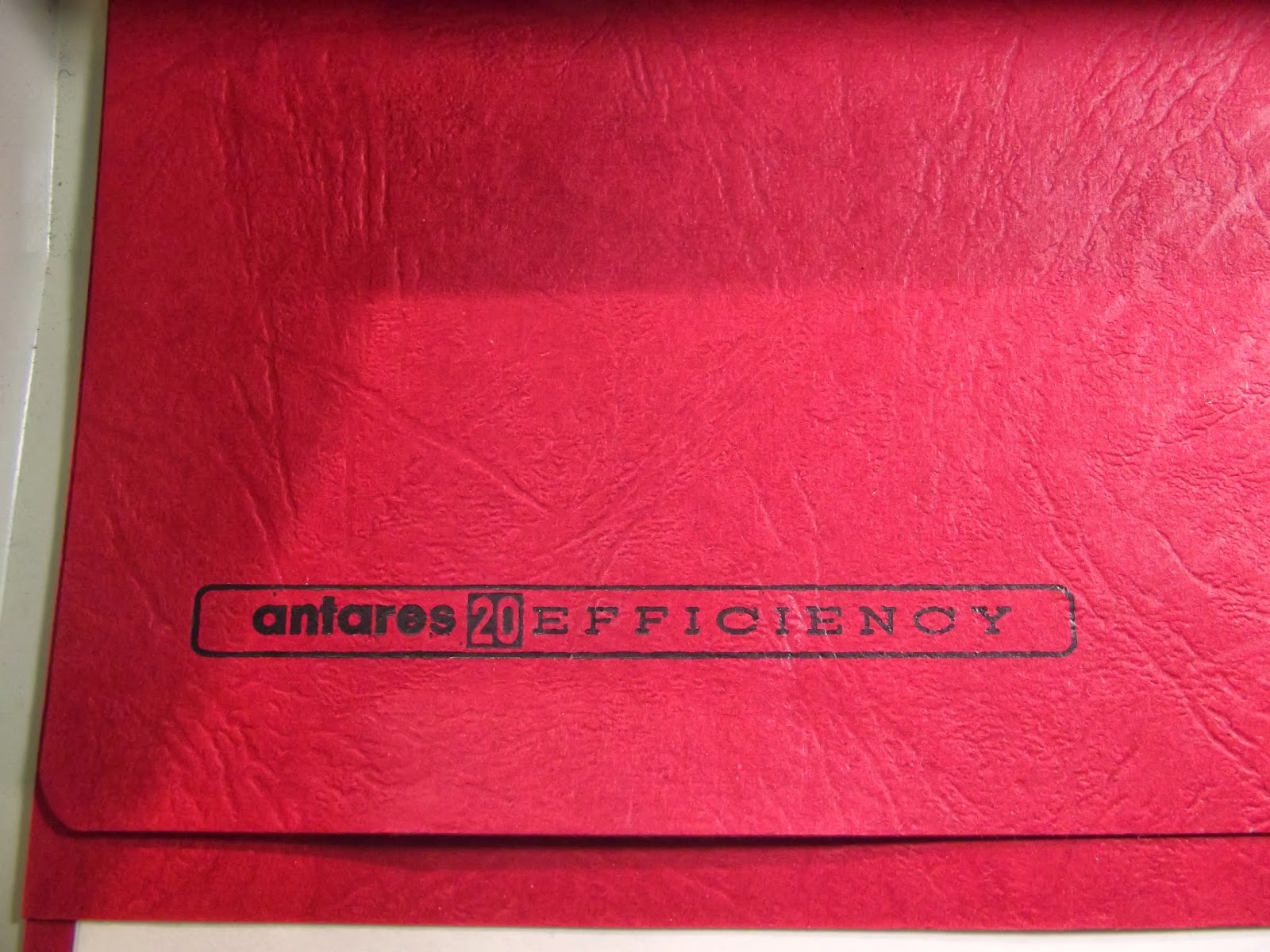 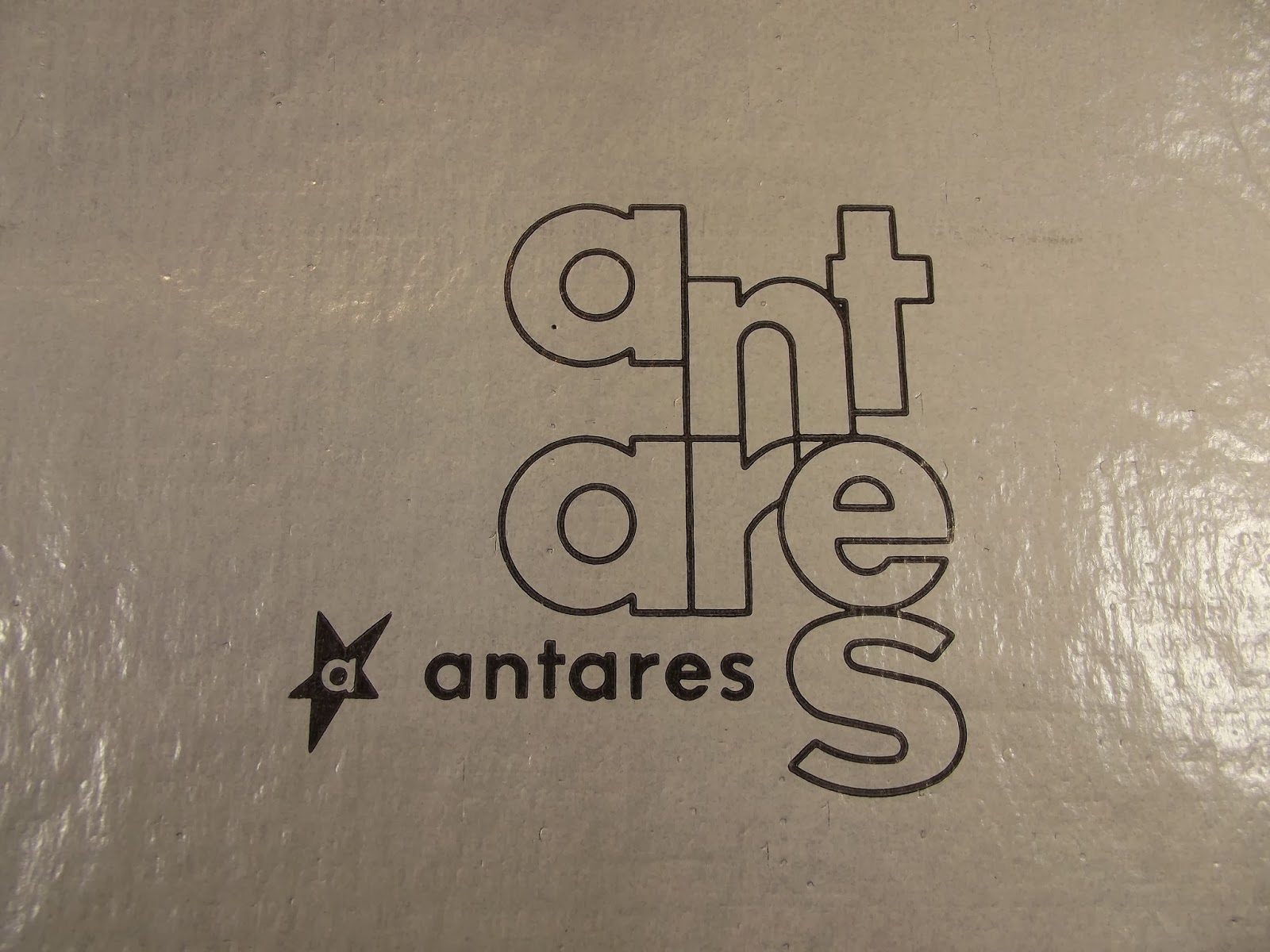 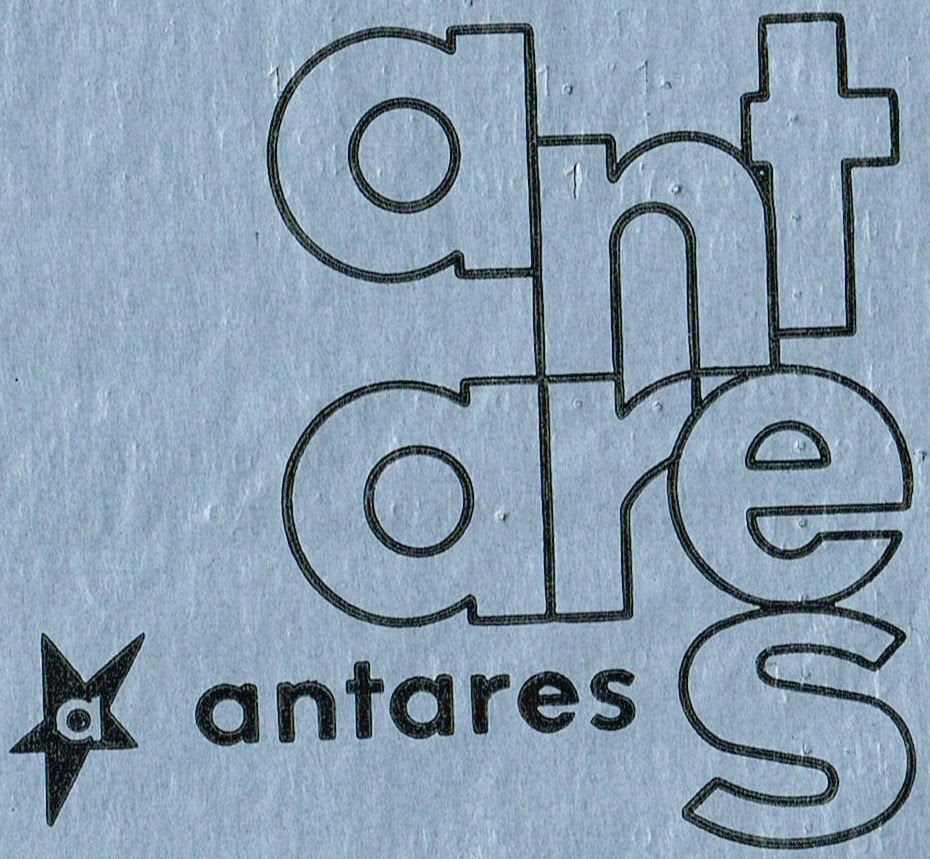 The handle is very useful, with or without the case cover. Previously I had thought the Olivetti Lettera 32 the easiest portable to carry around (out of its case), because one only has to put four fingers under the ribbon spools cover, grip the bar running across the machine, and walk away with it dangling from one hand. The Antares 20 is even easier to carry.
One can see the line of thinking. Sottsass attached the handle of the case to the back of the Valentine instead of the side, in Grassi's case. Still, I had completely forgotten about Adwoa's comment on the Antares 20 from three years ago. But as soon as I - rather excitedly, I must confess - got home, I keyed in "Antares 20 Efficiency portable typewriter" and found an entry for one on Ted Munk's Typewriter Database.
The entry had come from Javier Vazquez del Olmo in Valladolid, Spain. His Antares is a 20S Efficiency, as it has a repeat spacer and tab key: 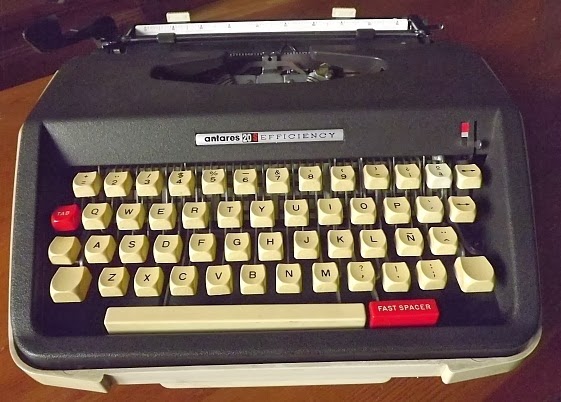 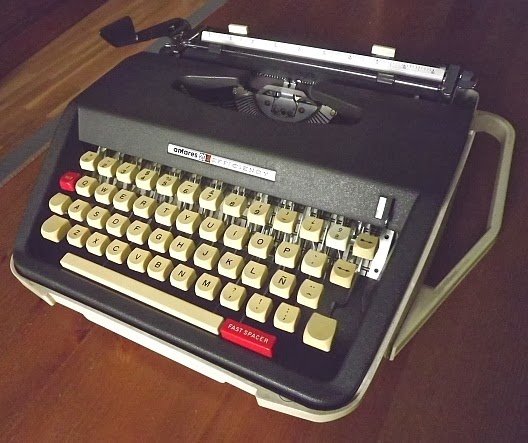 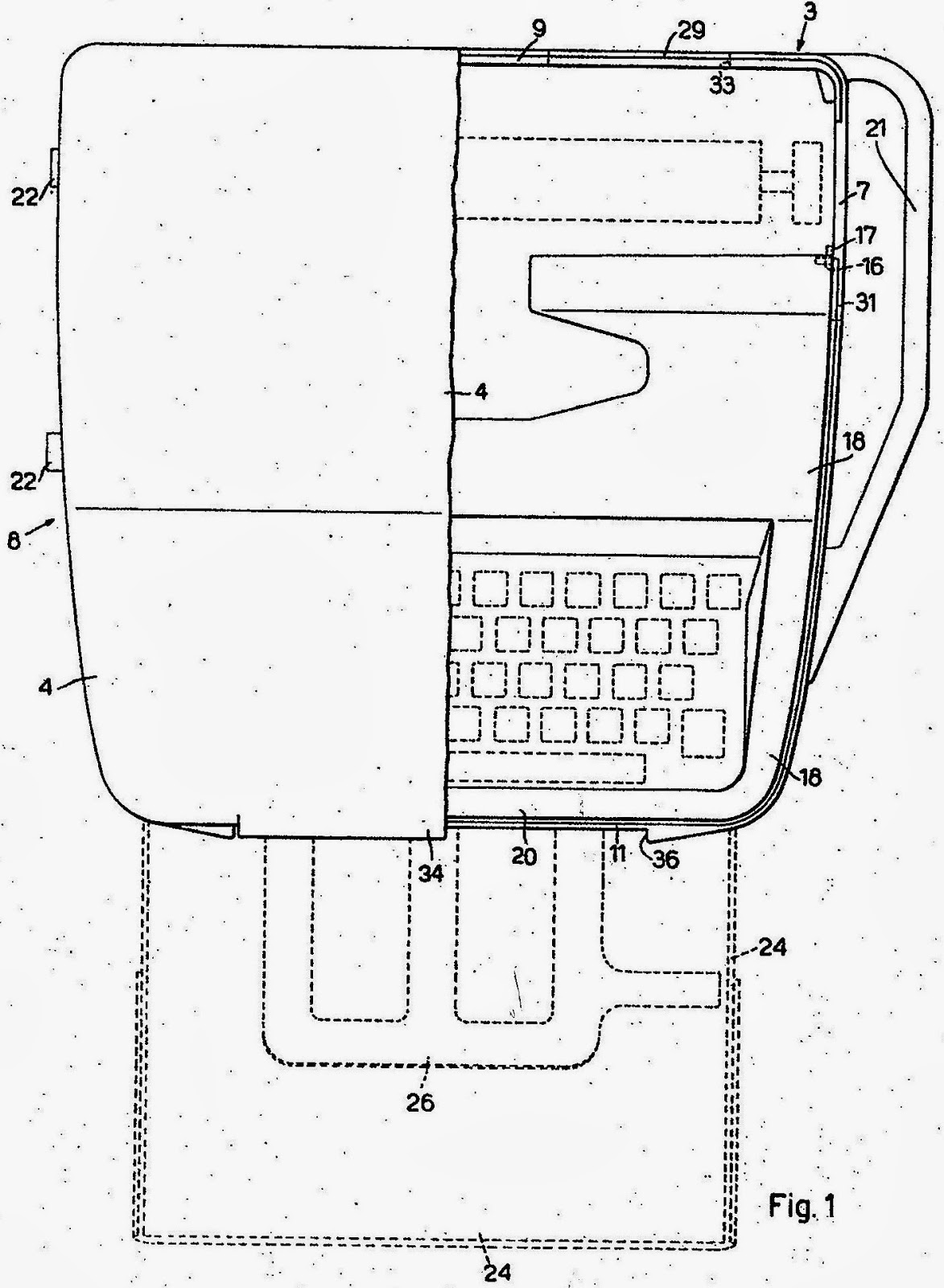 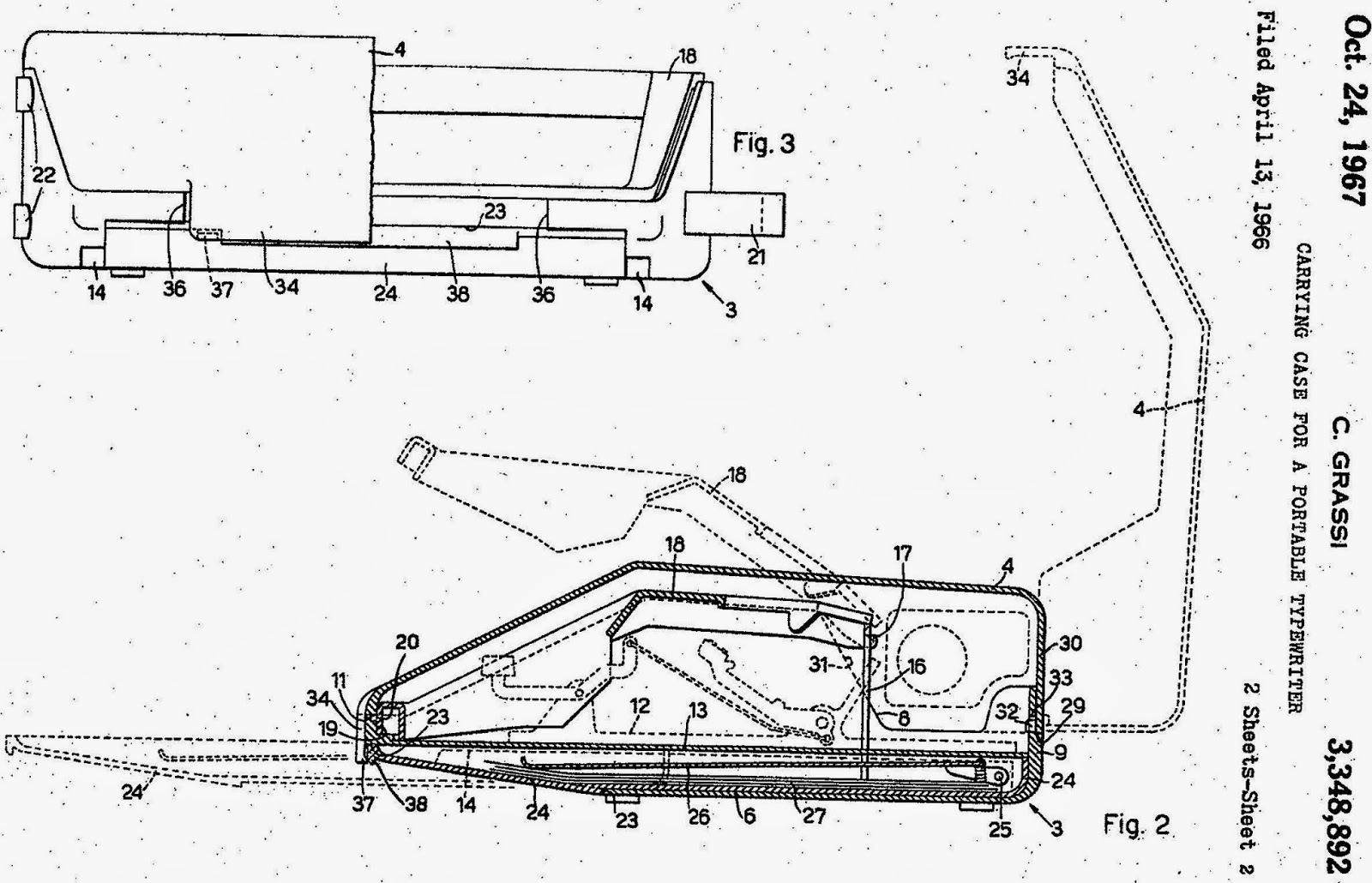 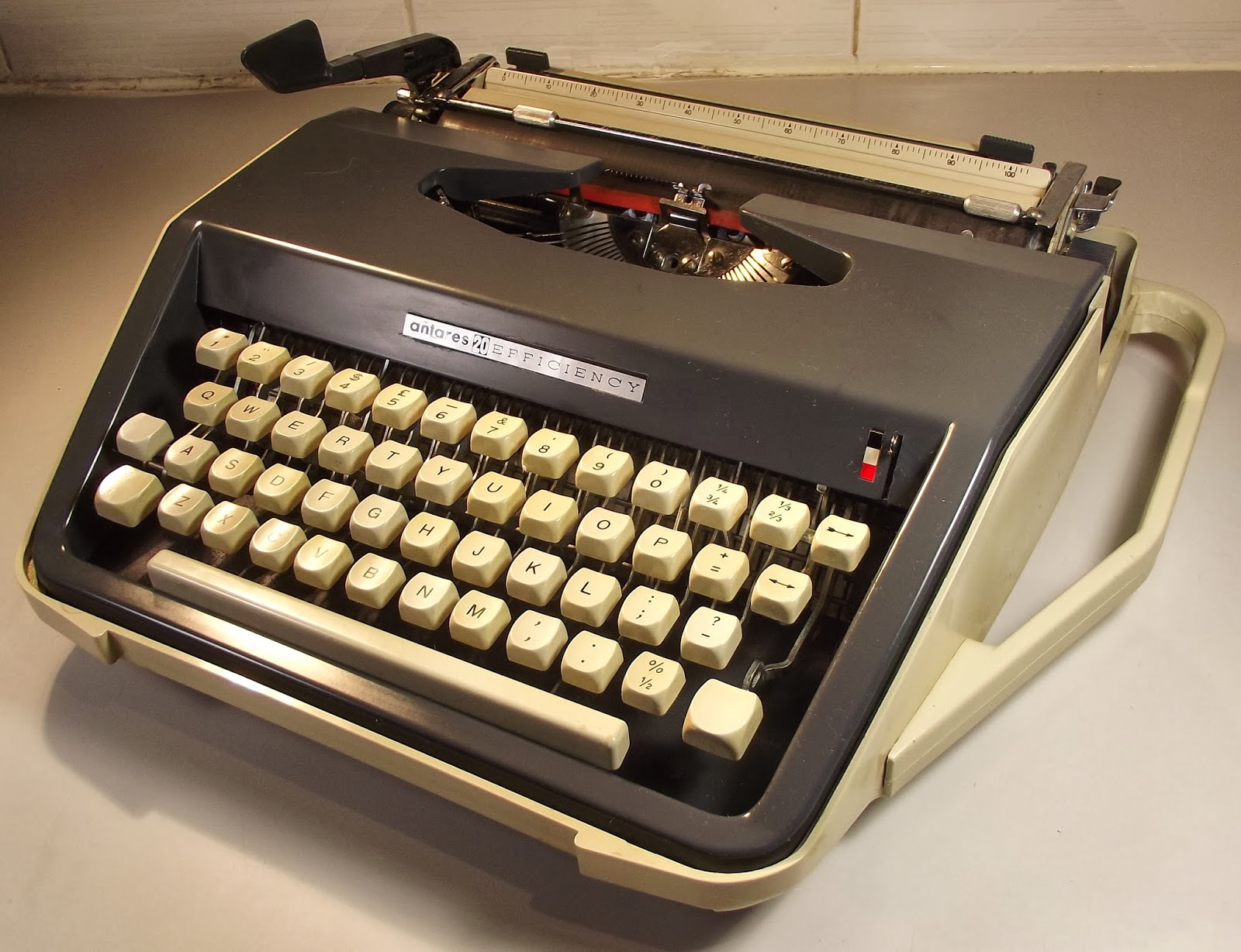 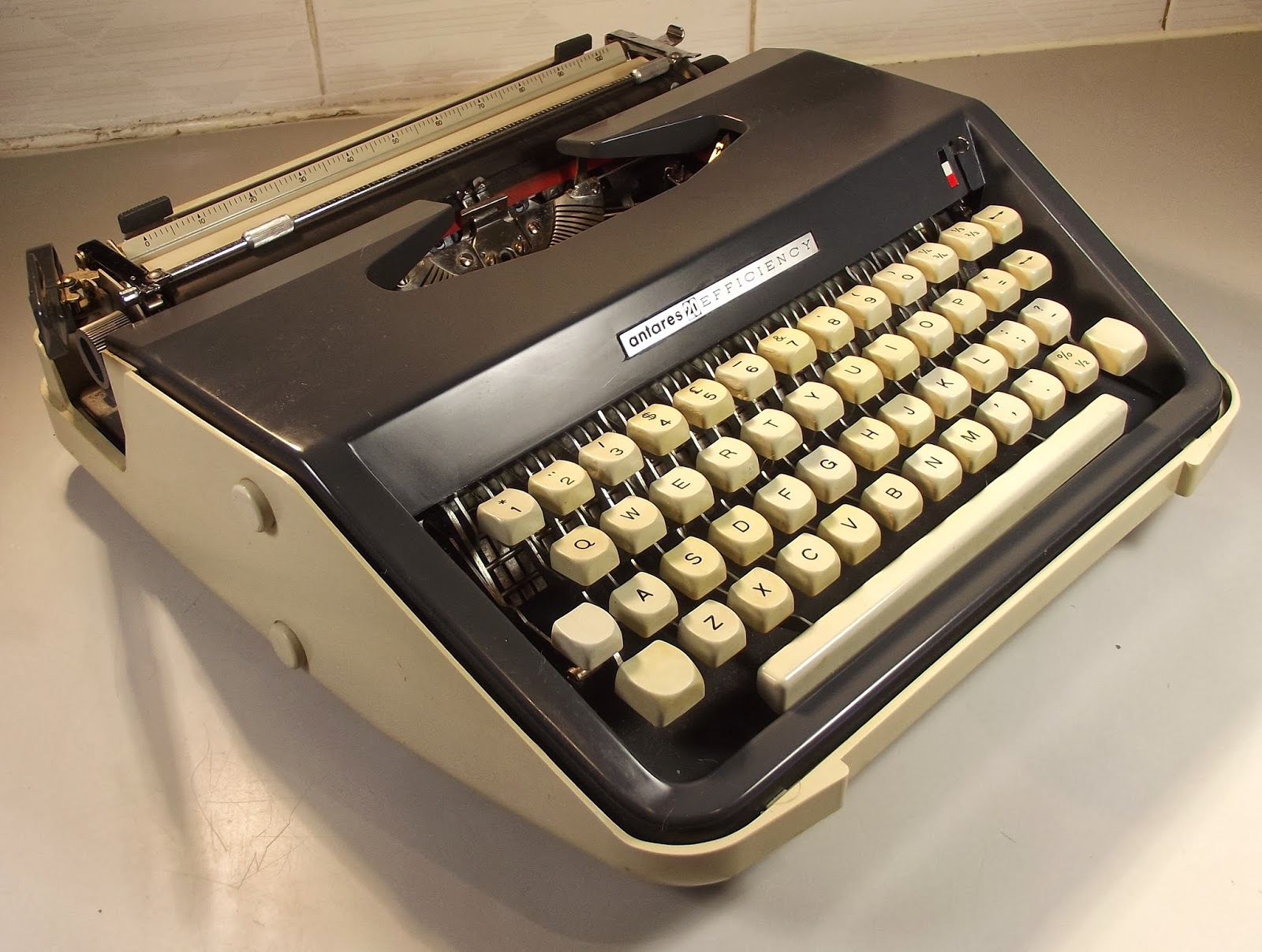 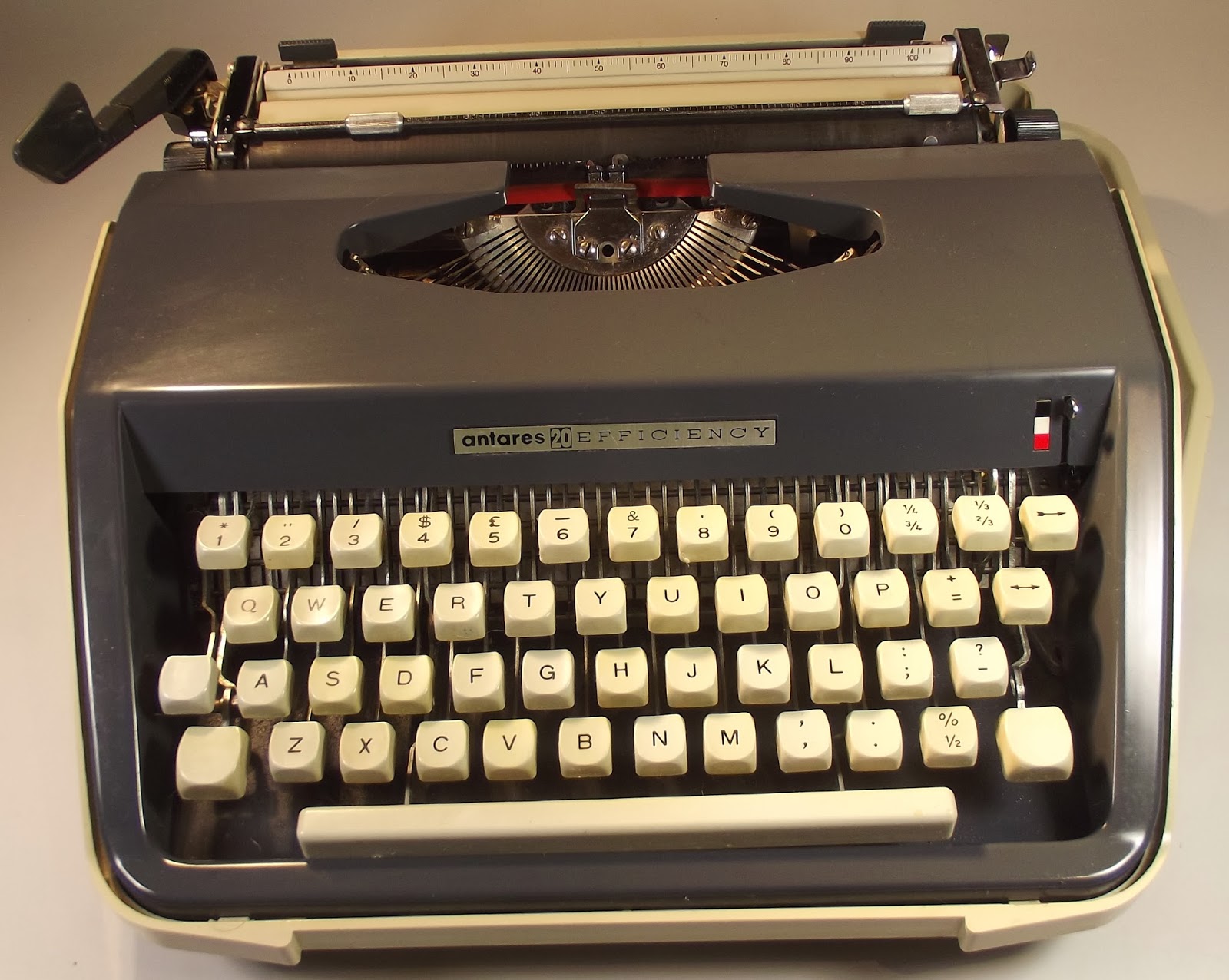 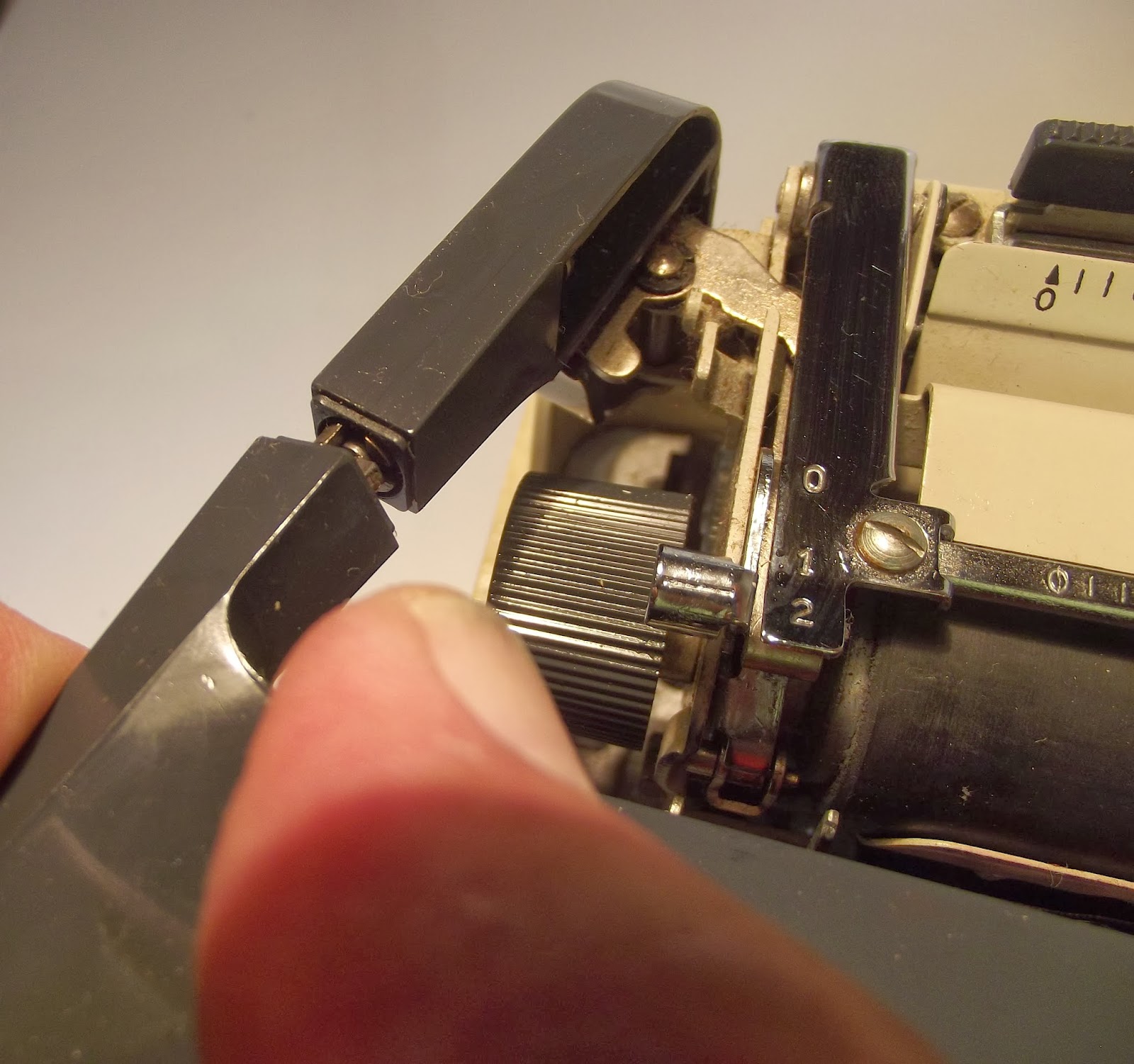 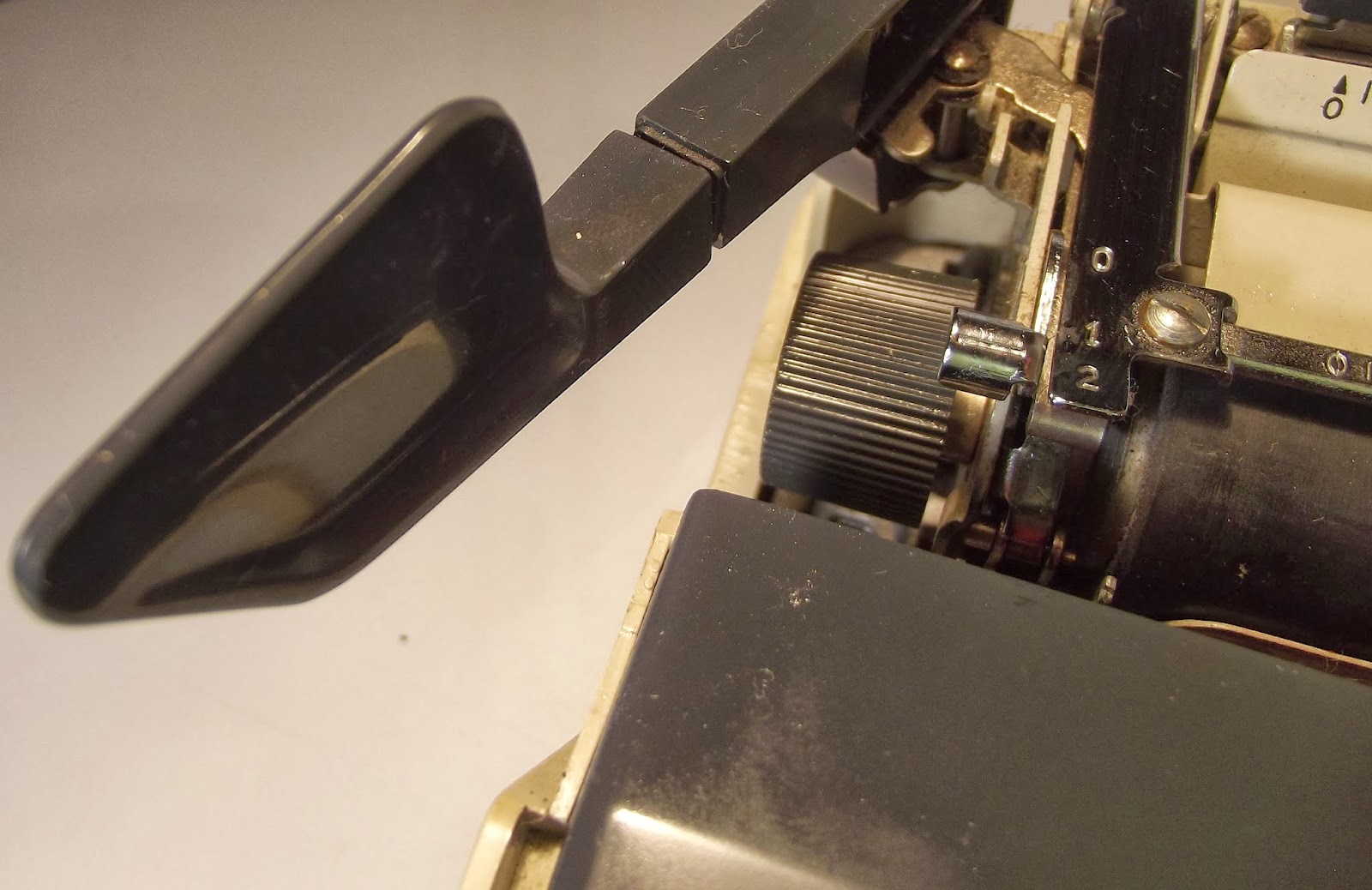 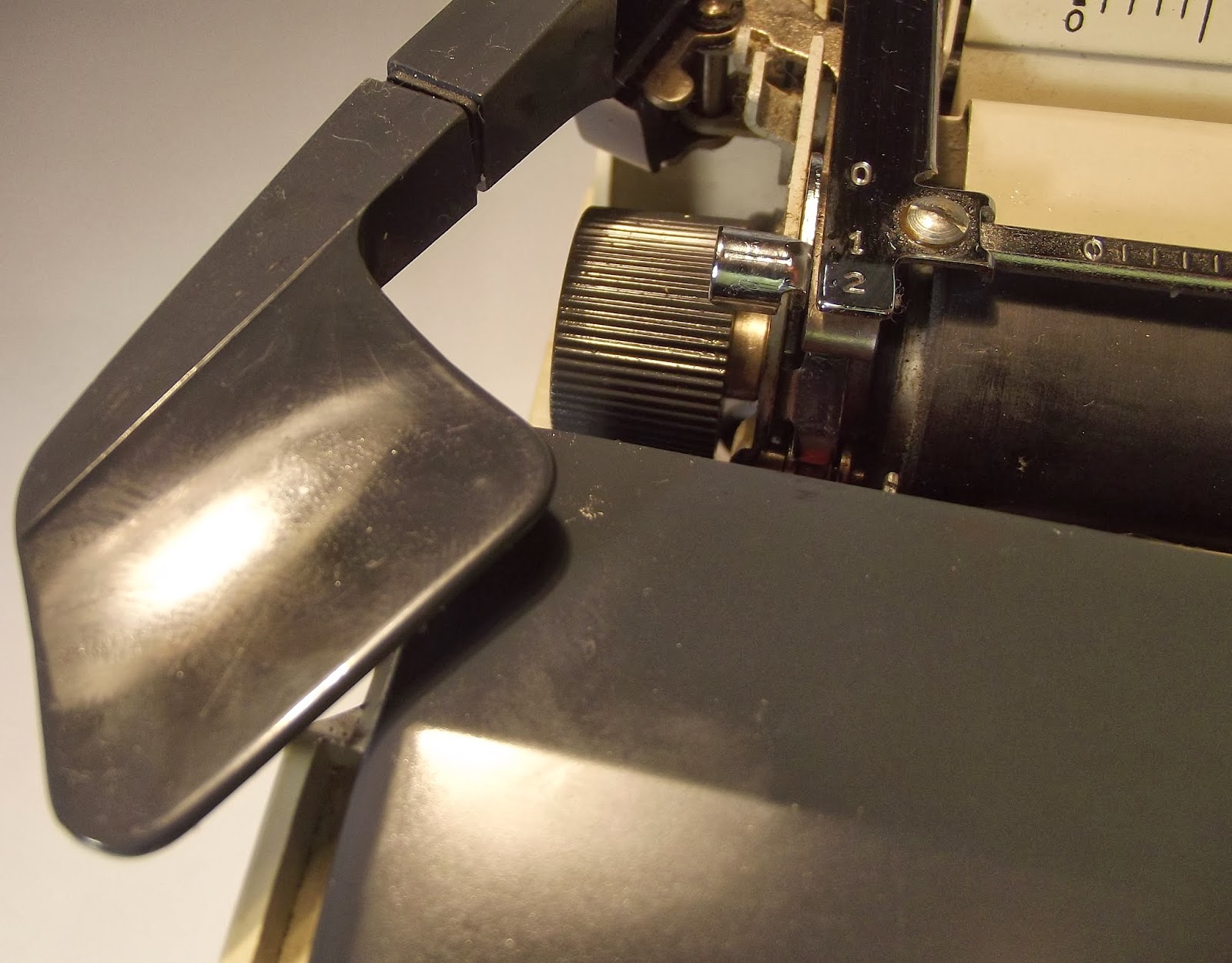 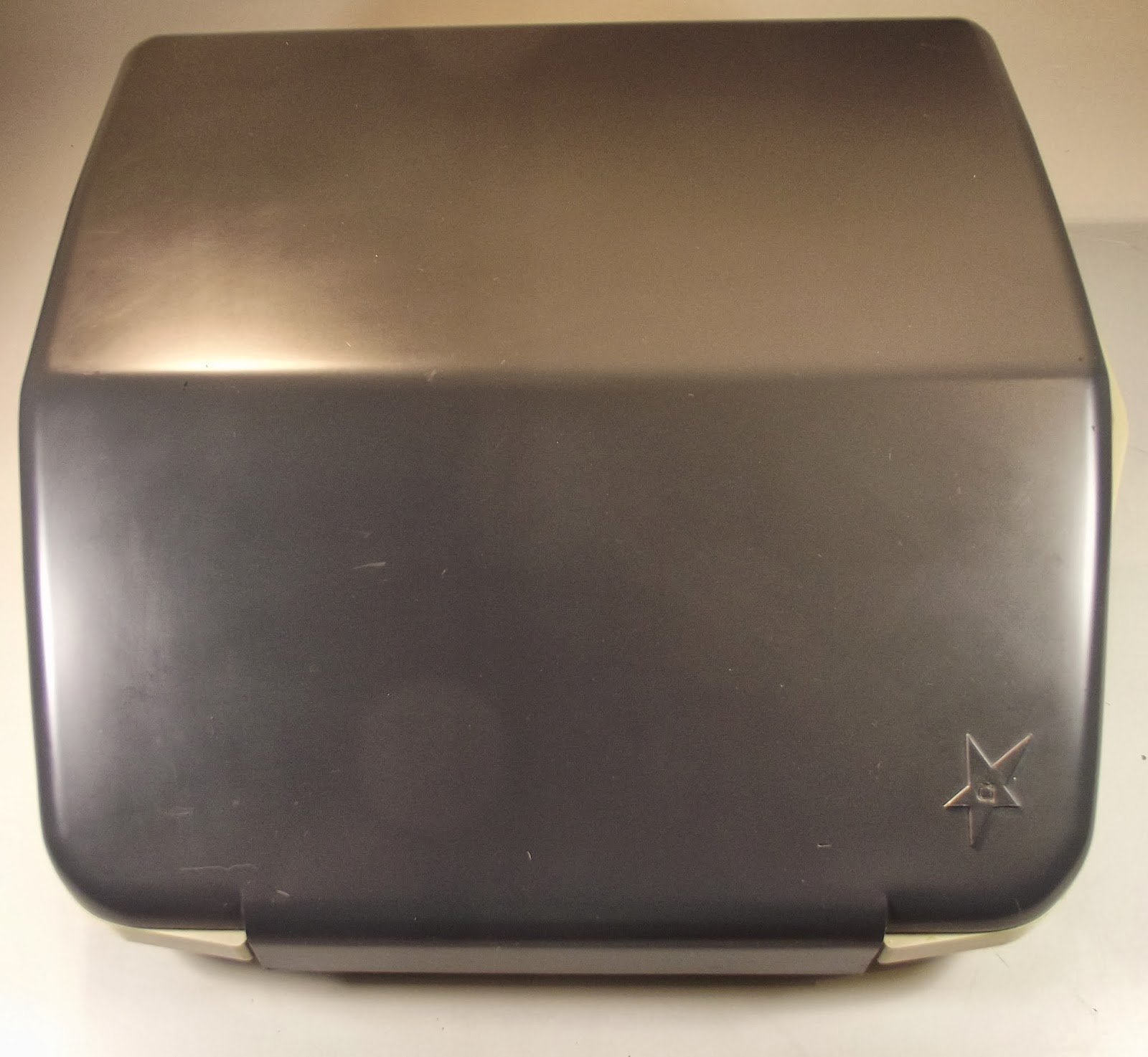 Grassi's Antares design actually inspired three Olivetti designs. Apart from the Valentine, there was also this case from 1970 from Reginald R.Gallant (1925-2011), of Bristol, Connecticut, for the Montgomery Ward Escort 55: 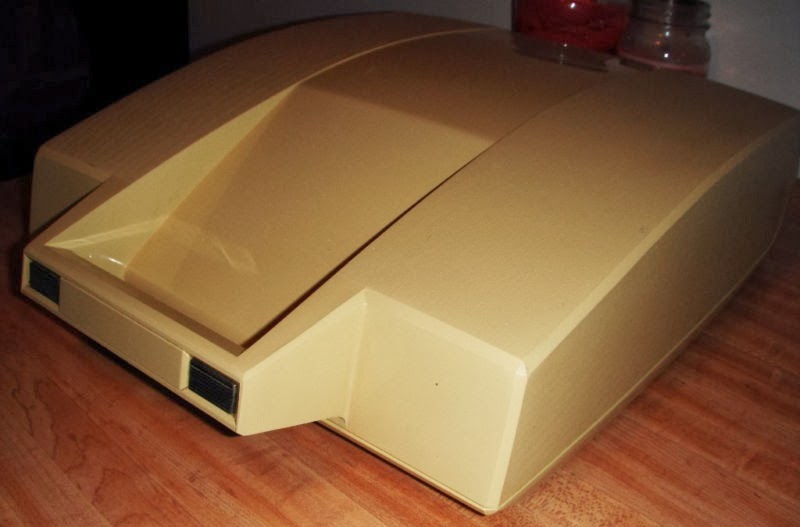 In turn, Grassi was influenced by a 1937 design from Paul B.Witmer (1912-1999), of Lancaster, Pennsylvania, for a typewriter case with a stationery tray inside.
Posted by Robert Messenger at 23:30

What a neat and unusual design! I think I'll have to find one for taking places on my scooter; weight, portability and space are all concerns. Many of my portables make the cut, but I also end up lugging around a mailbag from WWII for all my papers because they have no space to keep any safely.

Maybe I should just do something the inside of one of my not so old or rare typer cases...

How interesting. This really is a clever and original design!

This is not a common typewriter in the US, but not unheard of. One appears on eBay completed auctions.