The Canberra Zine Emporium's 2014 Zine Fair kicked off tonight with an al fresco Pecha Kucha - "Fire Up The Carousel", a zinester slide show - outside the fashionable Cupping Room in Civic, in the heart of the city. Ten presenters spoke for 20 seconds on each of their chosen 20 images.
My subject was the history of the typewriter. I was the eighth cab off the rank. As I watched the previous seven speakers come and go, I allowed myself to think I could do it comfortably. The reality was so different. I couldn't believe how quickly the images flashed by before my eyes, as I tried to recite all the relevant information that went with each image. But I got there in the end. Just.
It was an interesting exercise.  Huge flocks of squawking cockatoos* swooped over our open-air arena on a grassy knoll, Saturday night imbibers wandered past and stopped for a gawk, children clambered all over the stage. A hacker spoke openly about, well, hacking, while for a few minutes modern technology threatened to sabotage the whole thing.
Presenters came from Zine Thing and the Sticky Institute in Melbourne, the Refugee Arts Project and the Rizzeria Workshop in Sydney. I panicked for a second or two thinking I came after Safder from the Refugee Arts Project. Gee, what a hard act to follow that would have been. He spoke about zines made by refugees who'd fashioned makeshift paint brushes from broken off radio aerials and a few hairs snipped from a passing cat's tail.
As it was the National Library came between us, with a marvellous Voltaire quote that I've now forgotten. But it was about vast libraries and the value of small publications. The librarians were referring to zines, but I immediately thought of Typospherian blog posts and the Typewriter Insurgency - Voltaire would have loved us!
Tomorrow the fair itself gets underway in earnest!
*Apparently no one can decide what the collective noun for cockatoos is. The candidates are: A chattering, a clattering, a cluttering, a crackle, a cacophony or a cattle. 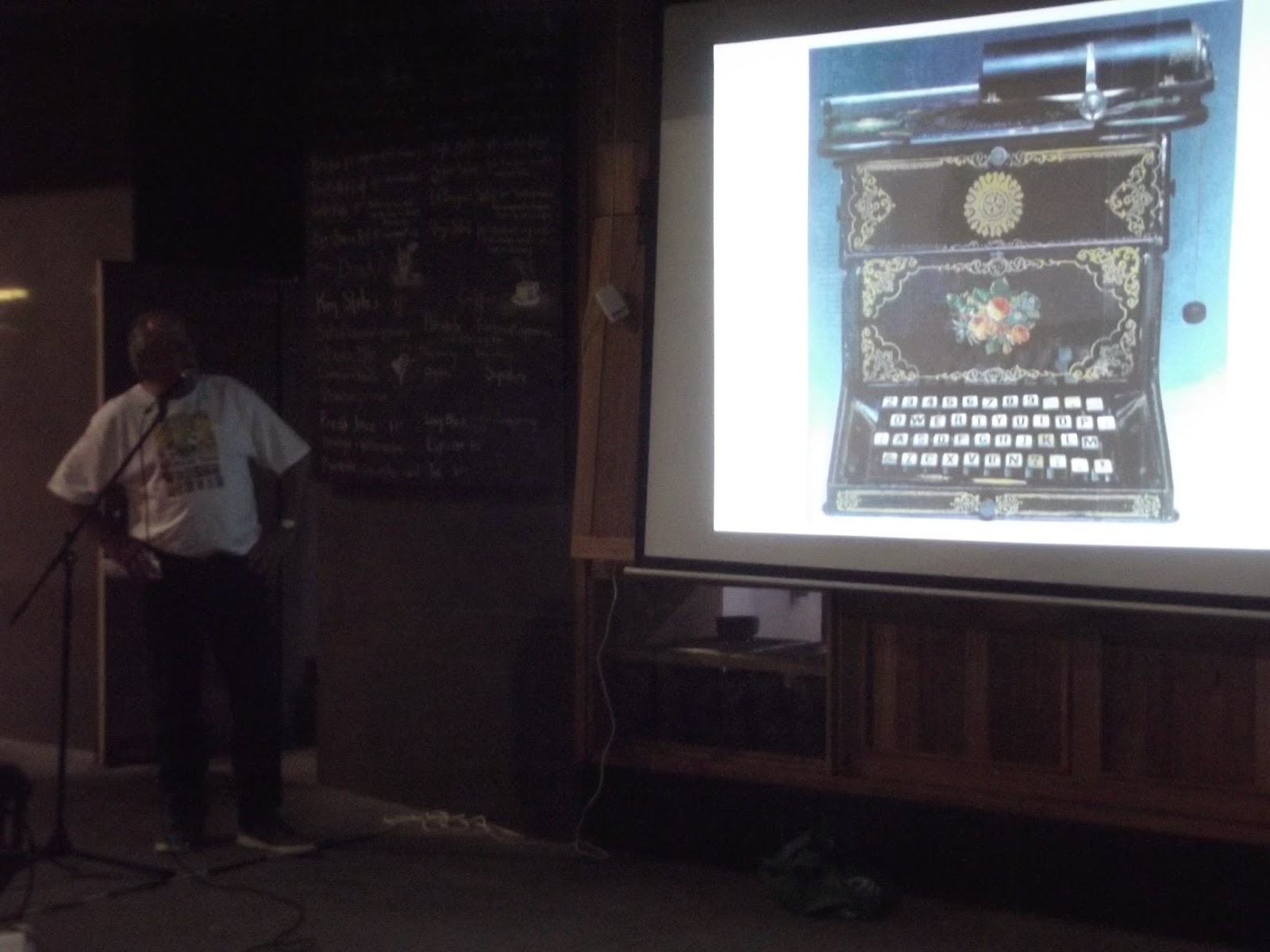 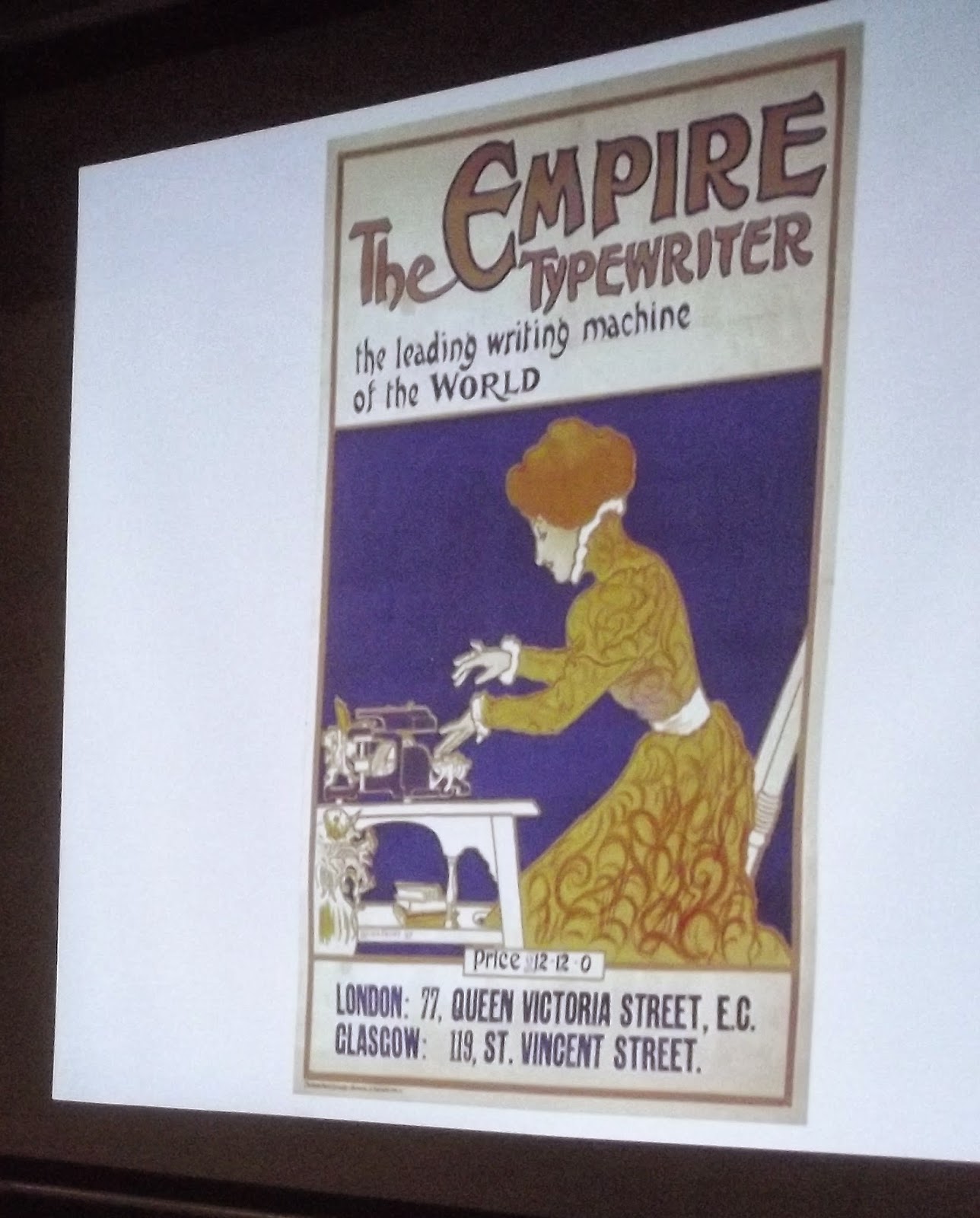 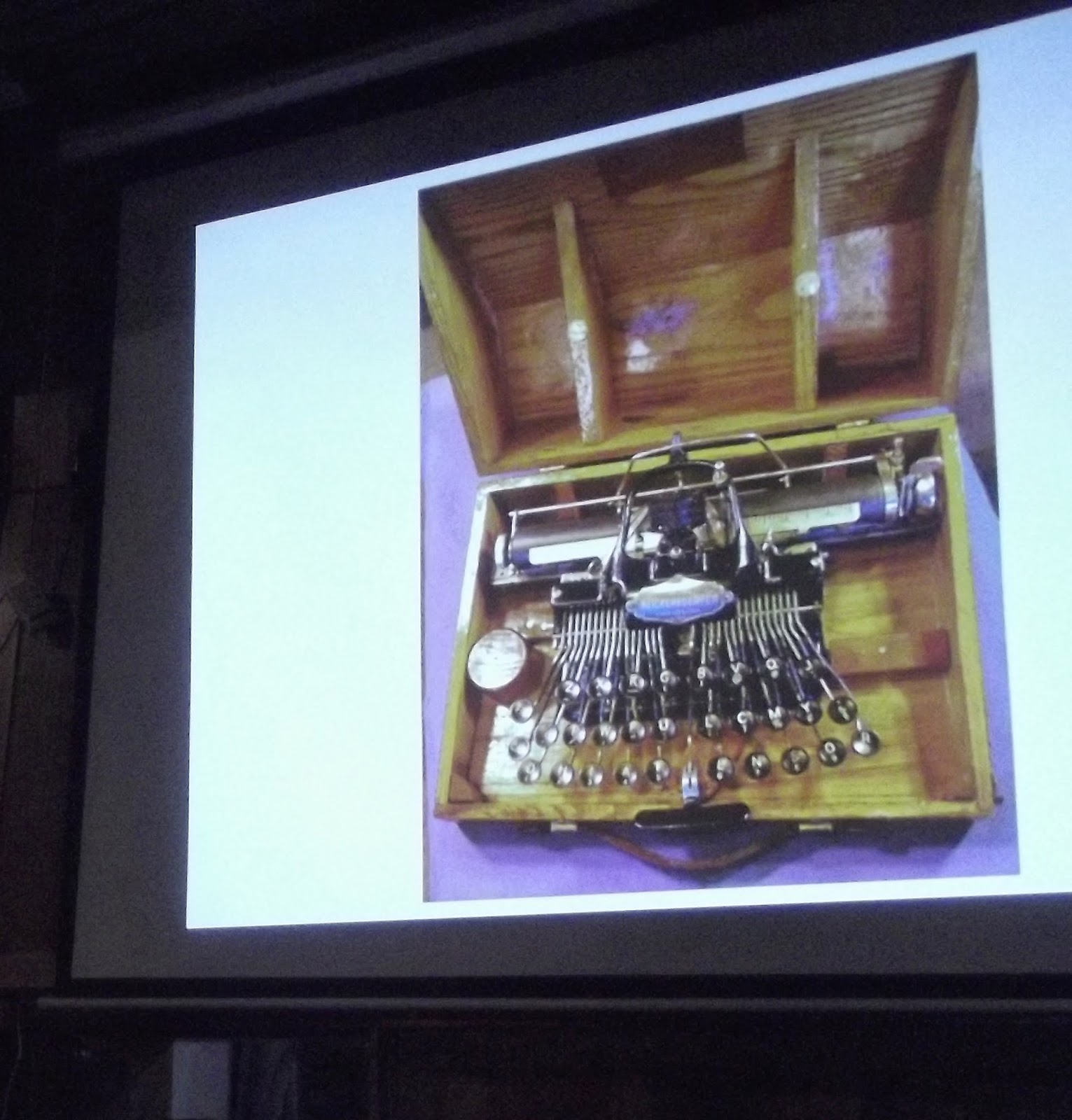 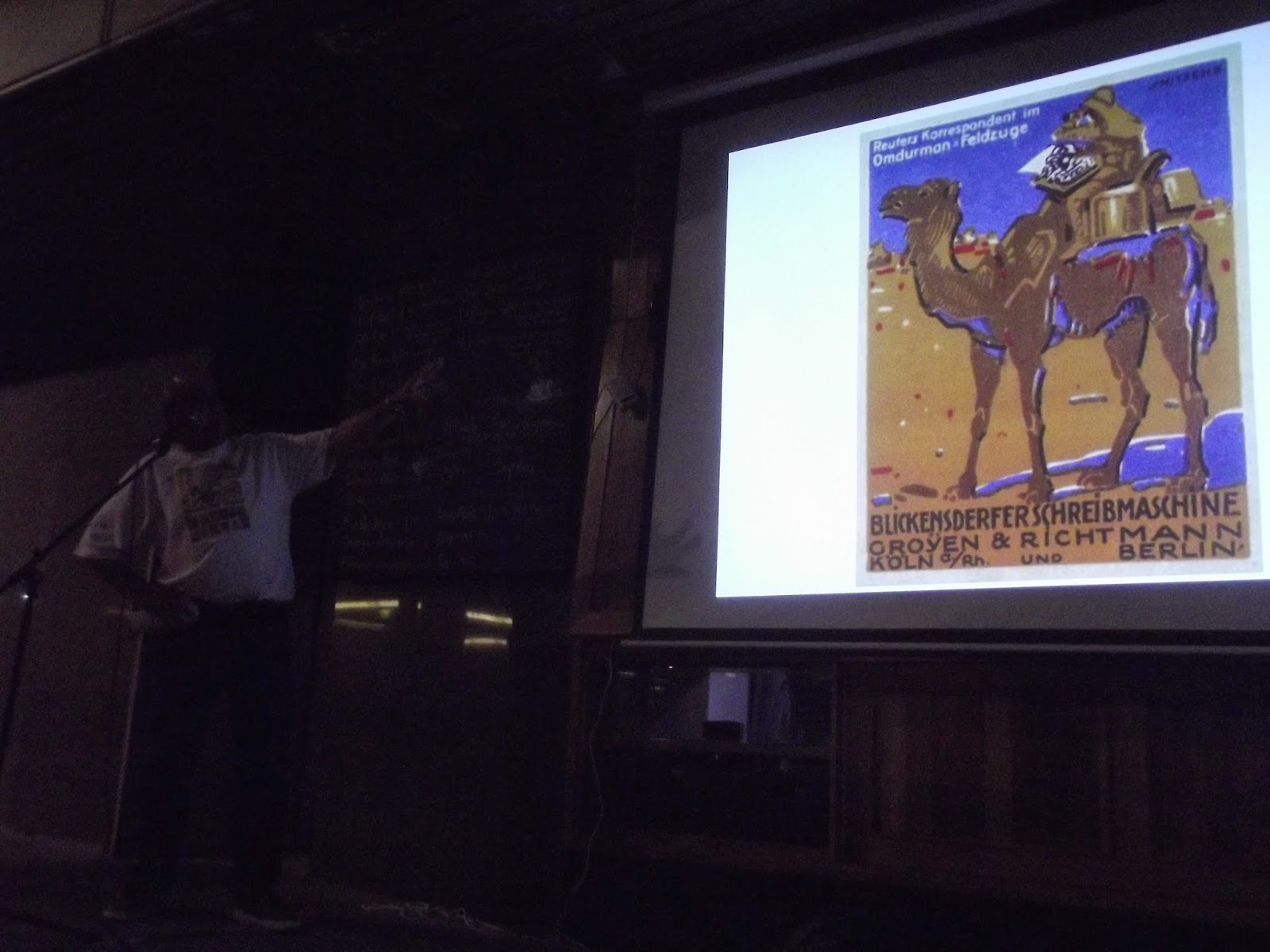 My statement, "You couldn't do that with a laptop", fired up the crowd. 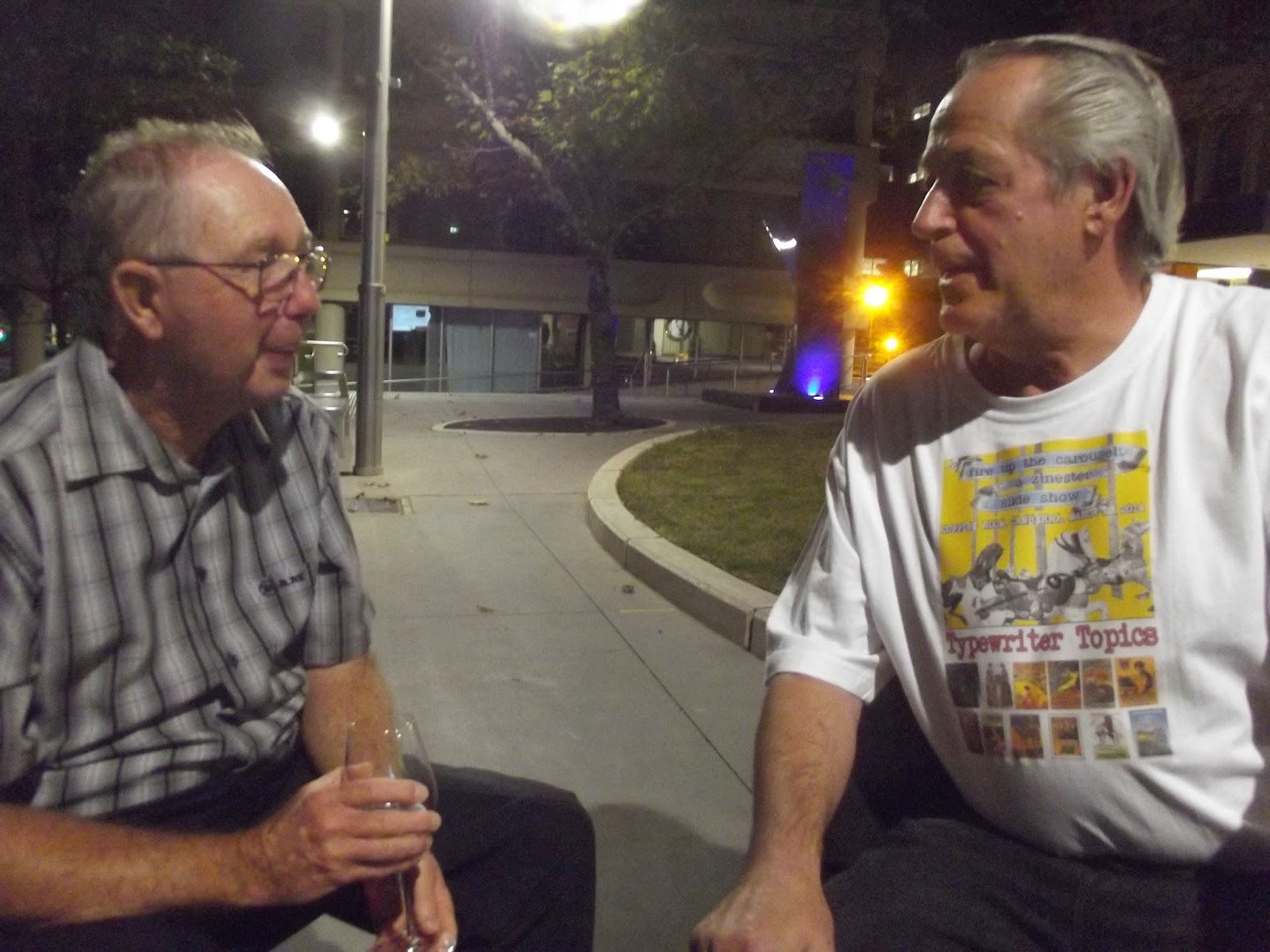 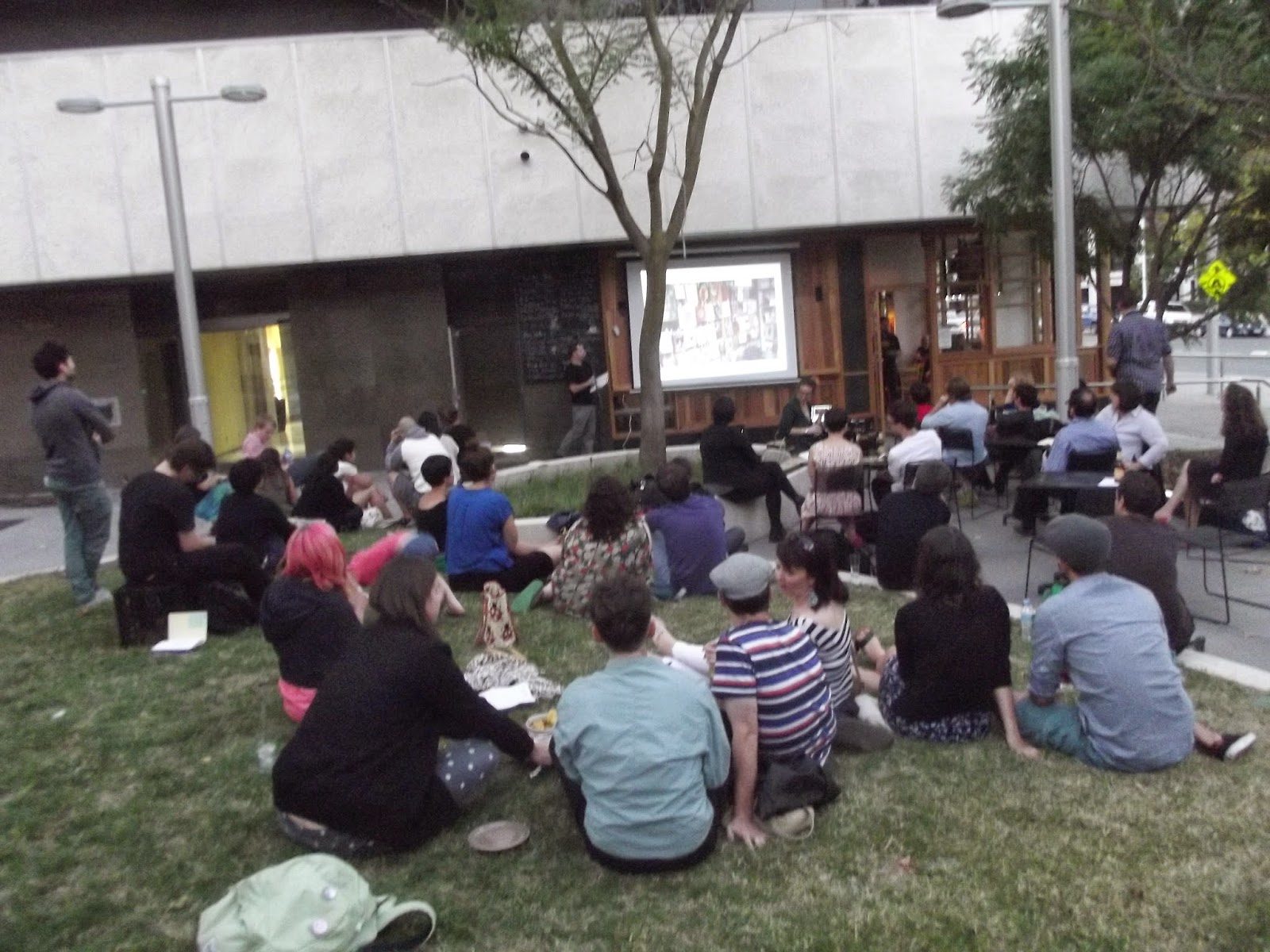 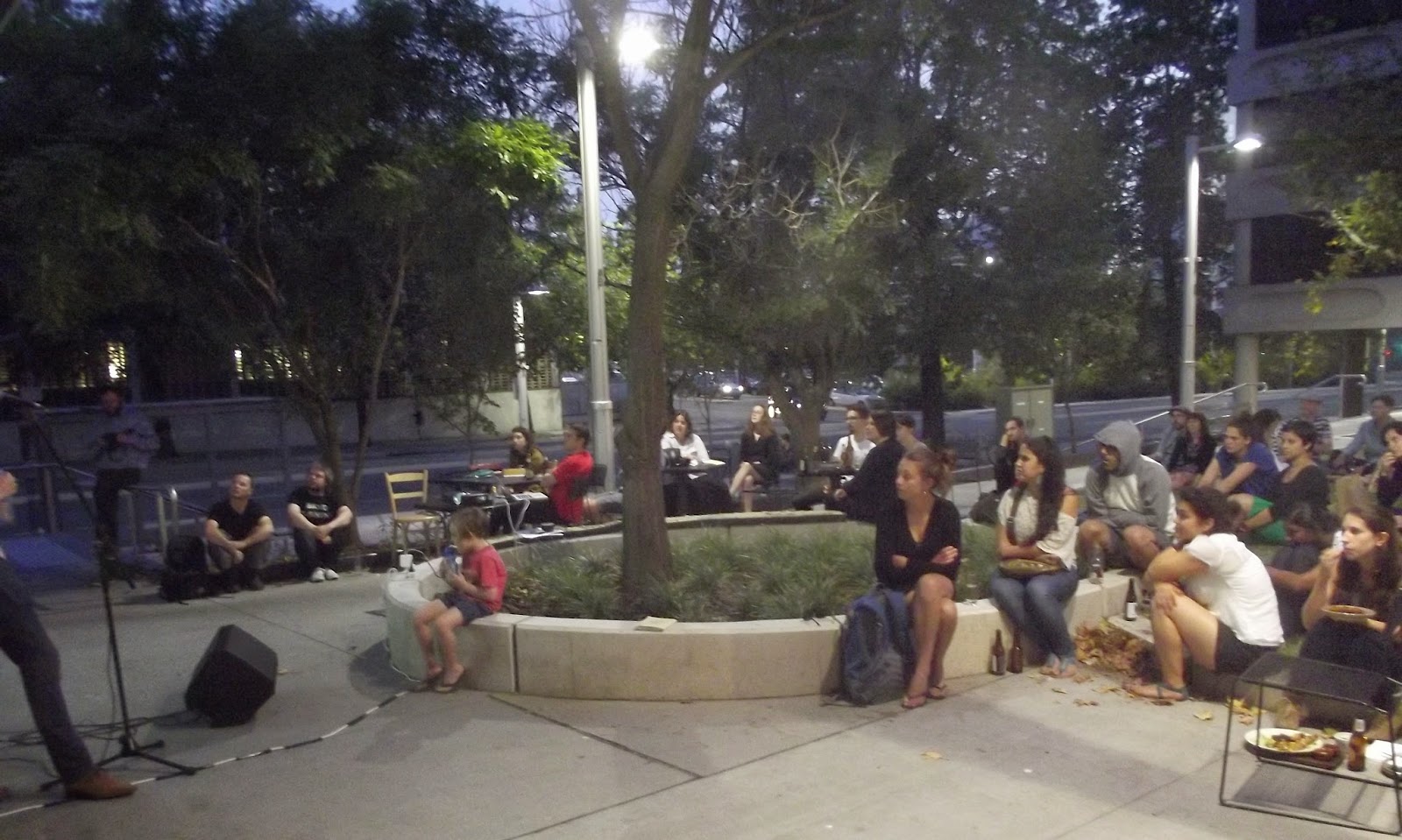 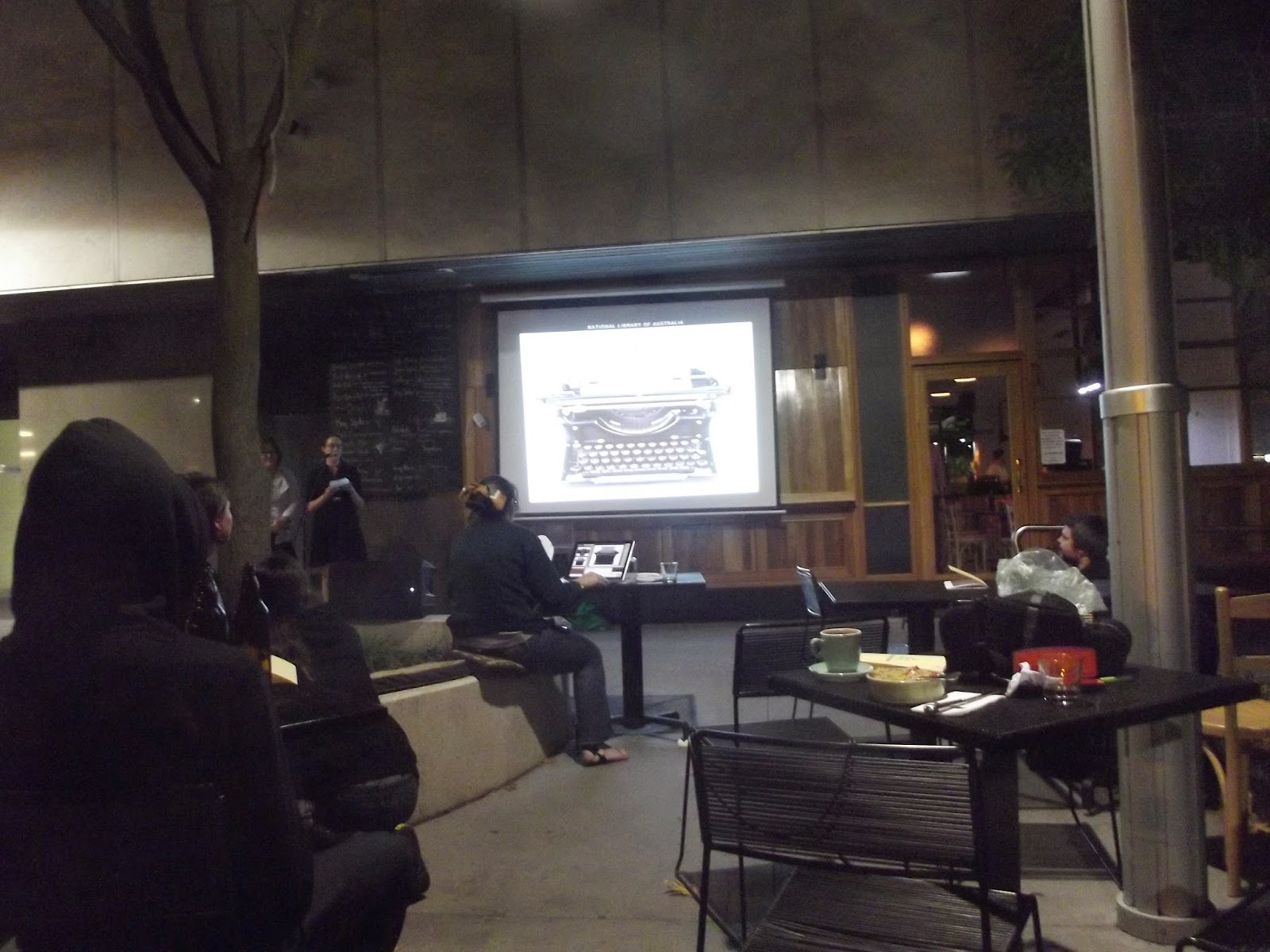 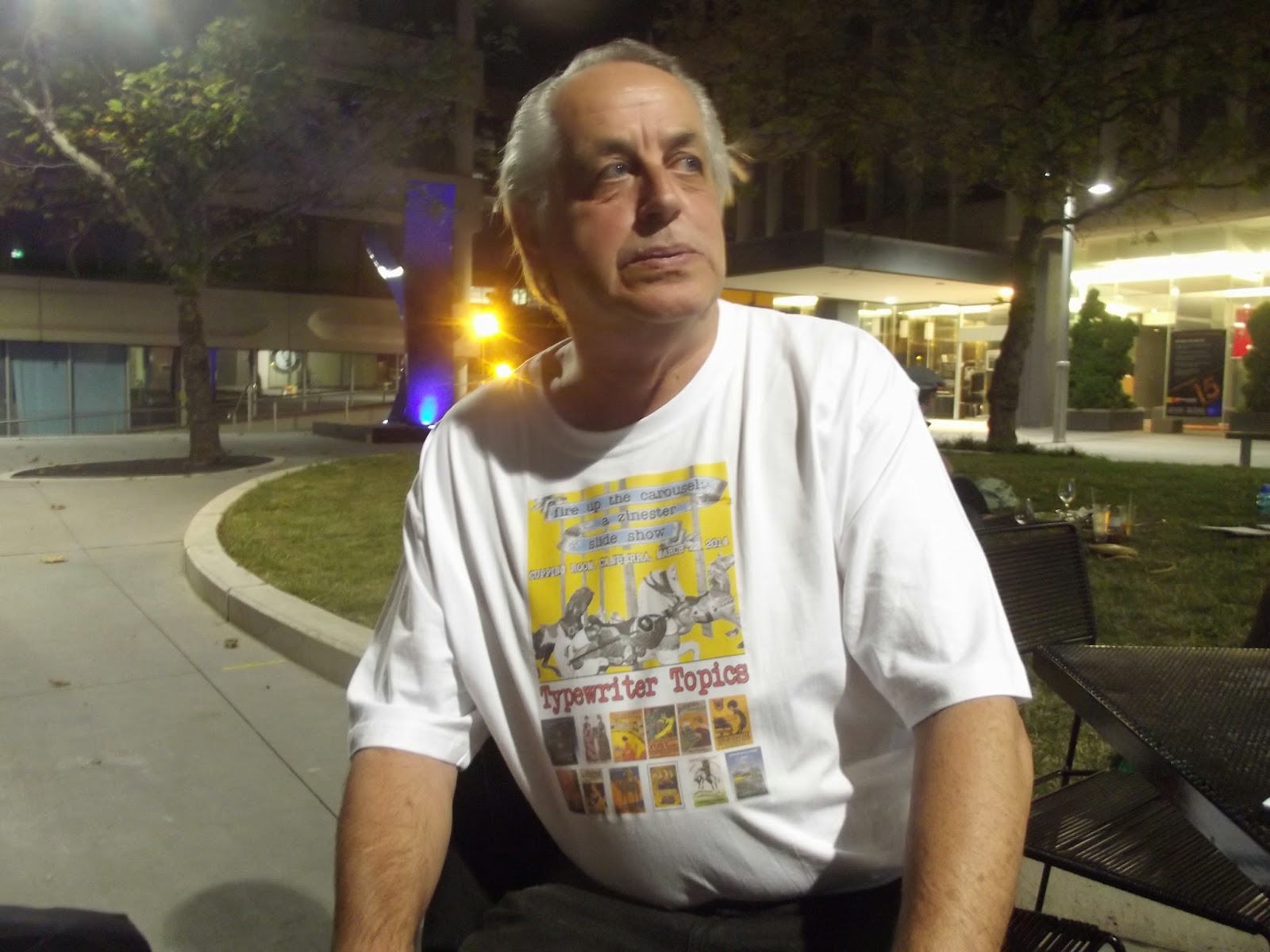 Yes, another special T-shirt for the occasion! 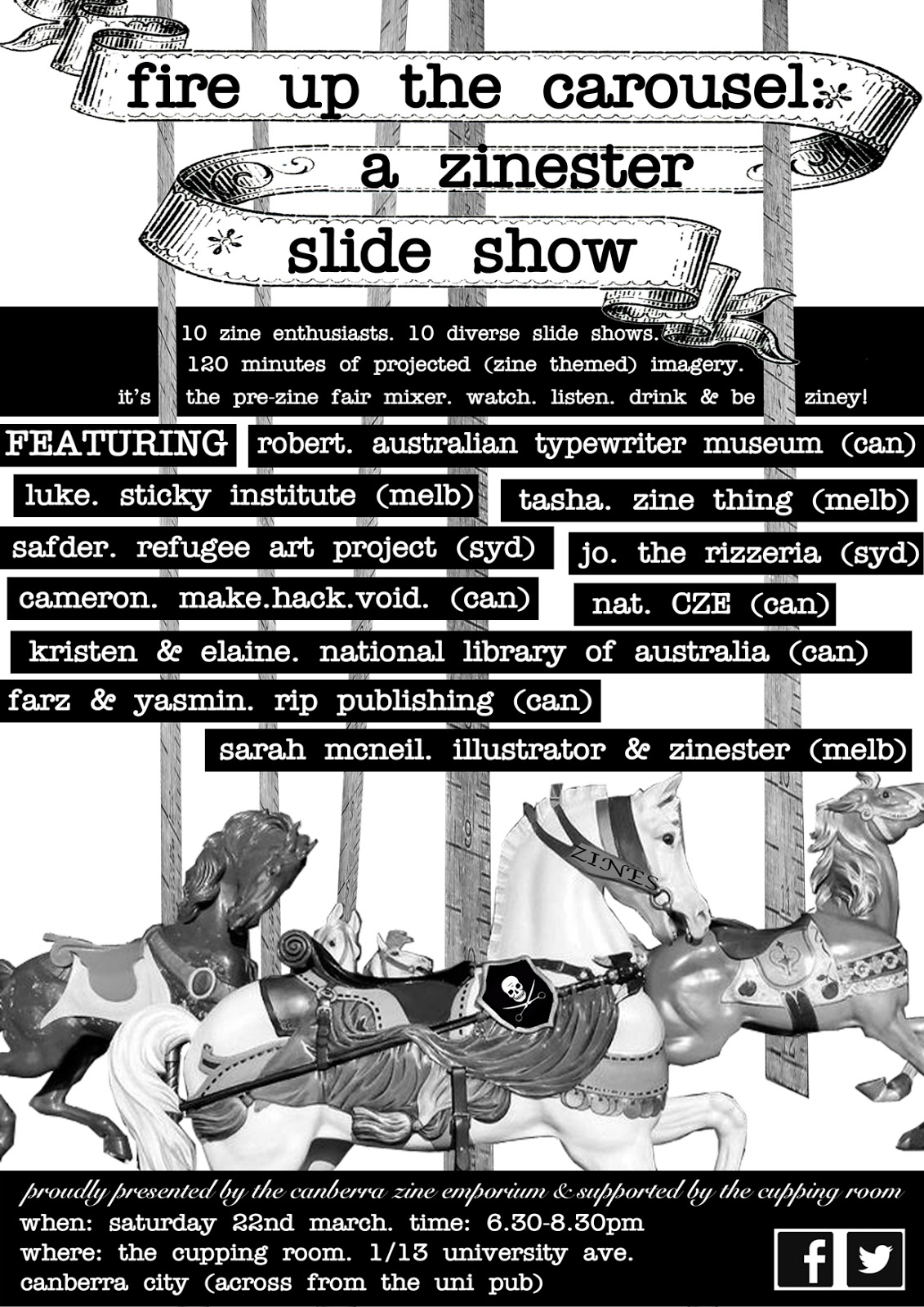 Posted by Robert Messenger at 00:03

Congratulations! Looks like a fine presentation and I know that it had to be very interesting -- you did it.

Great work Robert. I like your T shirt too.

This looks fun and exhilarating.

My impression is that the Australian zine culture is alive and well.

Ha ha ha. I do love those t-shirts.

Well done on another successful presentation. Looks like you had fun!

Congratulations, Rob! Looks like it was a lot of fun!

Hmm... quoting that other famous Aussie, Ginger Meggs, I'd reckon that the collective noun for a group of cockatoos would be "A bustle, a hustle and a hassle".

Those sort of rapid fire '3 minute thesis' or 20 photos in 20 seconds style things are impossibly hard! Looks like a cool event and good work!

Loved your presentation!
Voltaire quote - "twenty-volume folios will never make a revolution. It's the little pocket pamphlets that are to be feared".