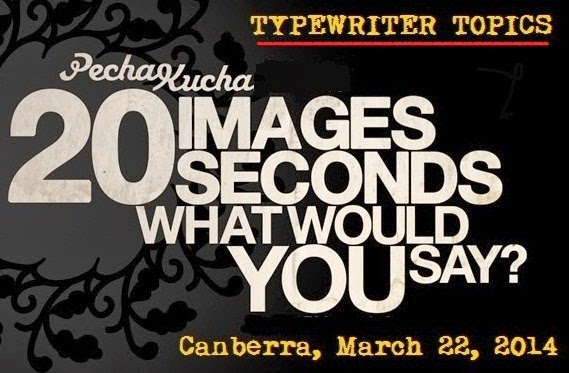 The Pecha Kucha part of the Zine Festival in Canberra this weekend will take place on Saturday evening. Today I selected the 20 images I will show in my presentation. I will spend just 20 seconds talking about each of the images. These are not necessarily my favourite 20 typewriter-related images, but I think they will tell a story about significant parts of typewriter history. 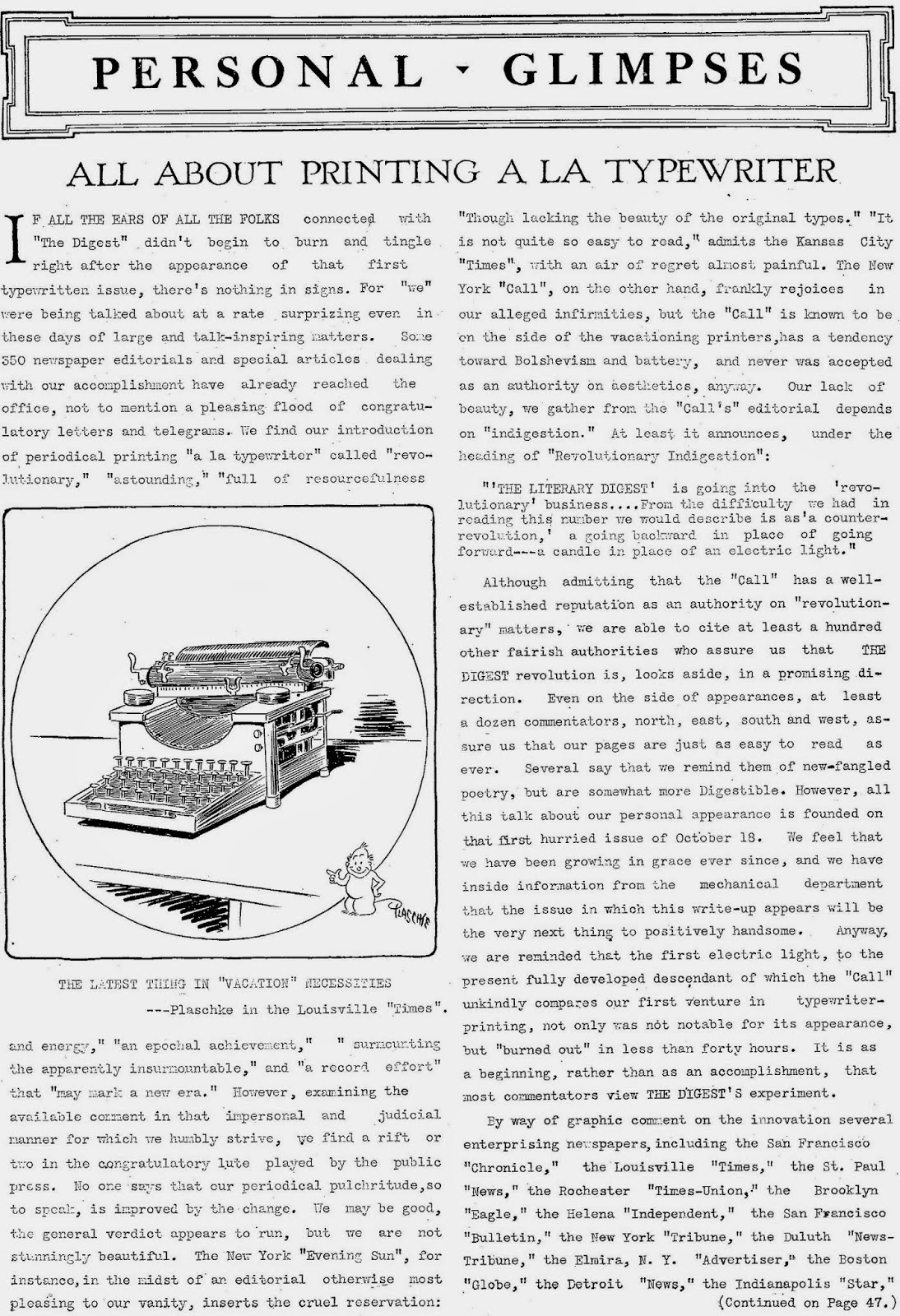 1. A couple of Typospherians commented on my post about the Callitypy system developed by Jacob Backes, which was used to typeset newspapers and magazines during a printers' strike in New York in 1919, saying it reminded them of zines. So I thought it might be appropriate to start by referring to that. 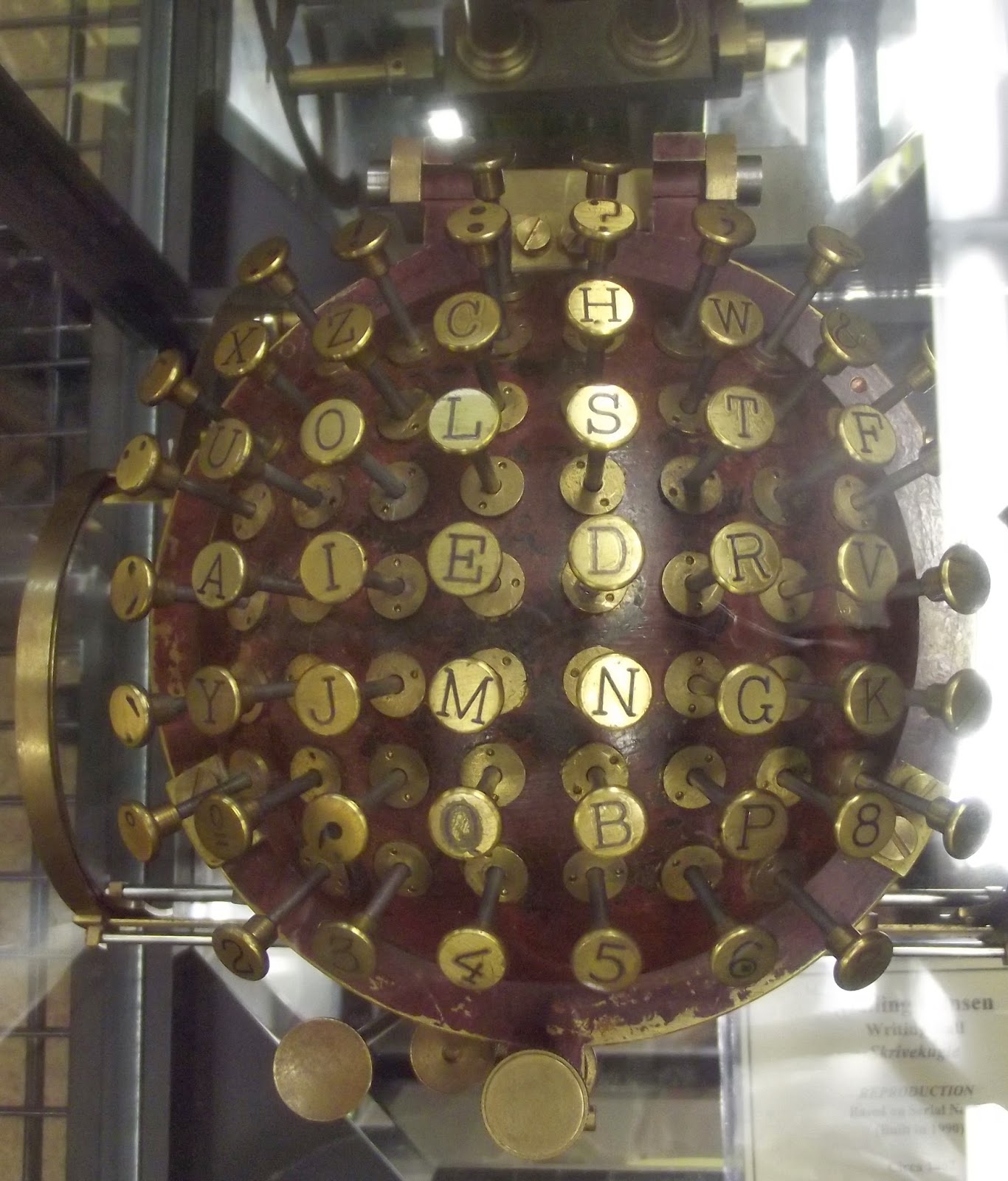 2. I do love this photograph of the Hansen Writing Ball which I took at Herman Price's Chestnut Ridge Typewriter Museum in West Virginia last October, and I want to include the Writing Ball in my presentation as the first commercially produced writing machine. 3. Naturally, I will then move on to the first machine called a "type-writer", the Sholes & Glidden, and will talk about how that was developed and manufactured. 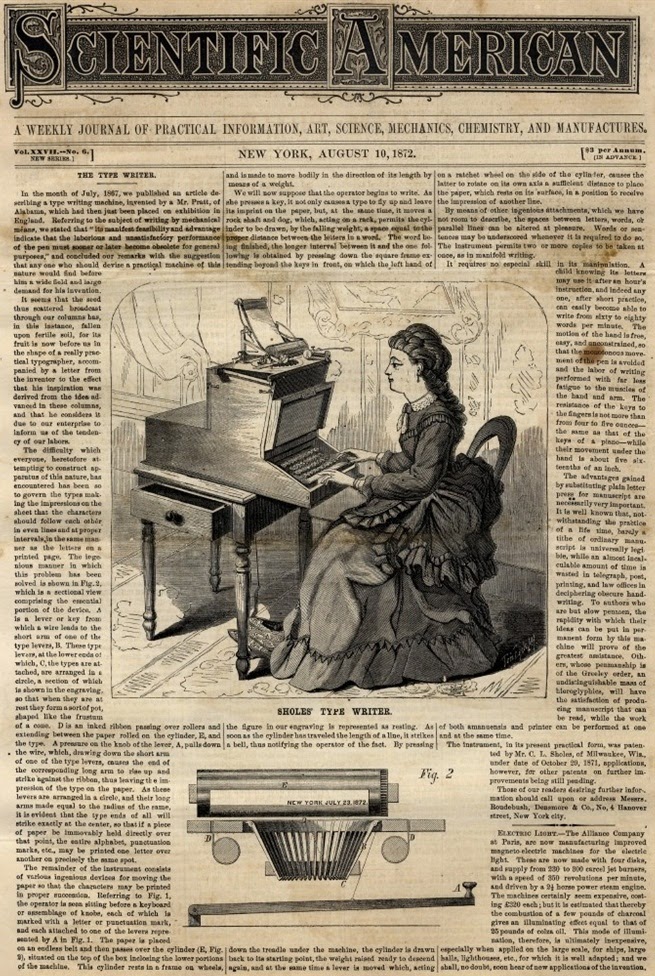 4. Mention of Christopher Latham Sholes' daughter Lillian being the first female to use a typewriter will lead me on to talk about the enormous impact of the typewriter on employment opportunities for women in the last quarter of the 19th century. So appropriate that 66 years later, Lillian was again put behind the S & G, to mark women's efforts to break through the glass ceiling. 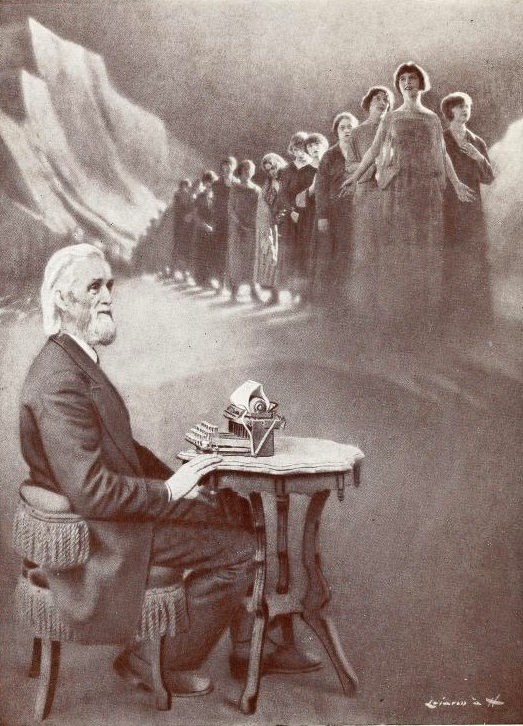 5. This collage of Christopher Latham Sholes and the seemingly endless line of hundreds of women showing their gratitude to him for the employment opportunities given them by his invention says at least 1000 words! This is definitely in my Top 10 typewriter-related images. 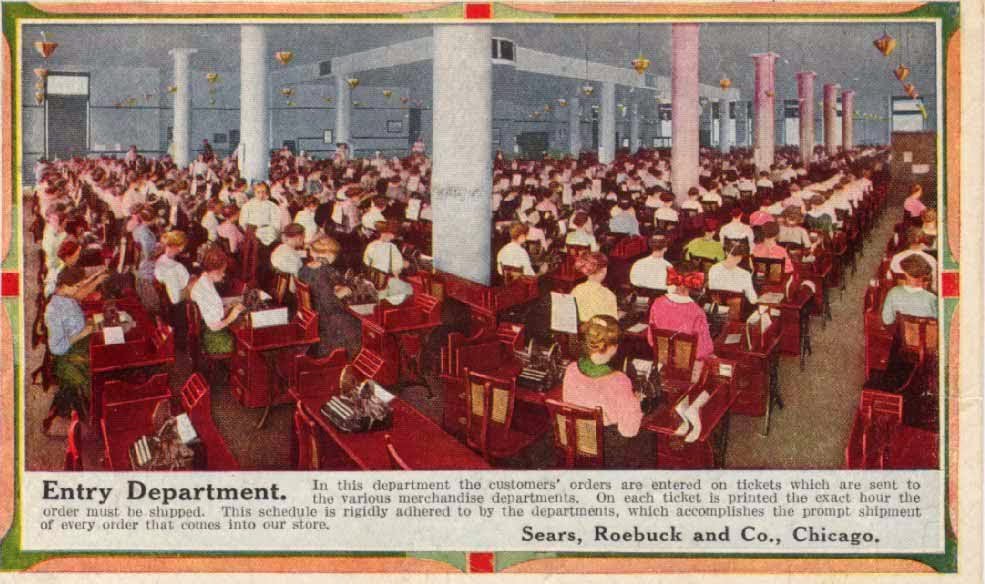 6. There are few if any images which better illustrate the massive impact of typewriters on women entering the workforce than this 1913 Sears Roebuck card, with hundreds of typists at their Olivers. 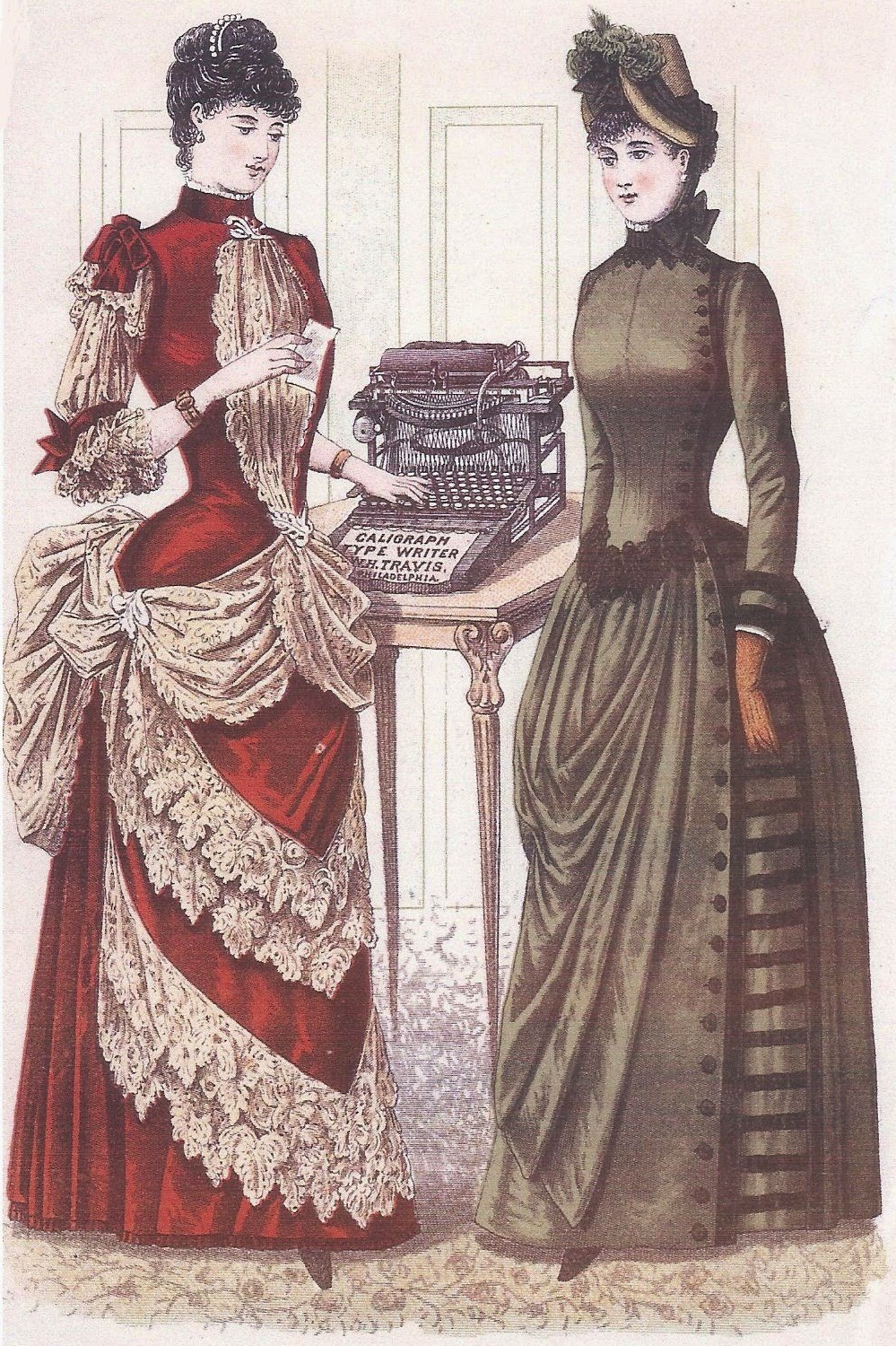 7. I wanted to include the Caligraph, the second typewriter on to the market. It offers a chance to mention James Densmore and George Yost, patent disputes, royalties, business machinations, double keyboards and fine looking ladies being used in typewriter advertising. Also speed typing. 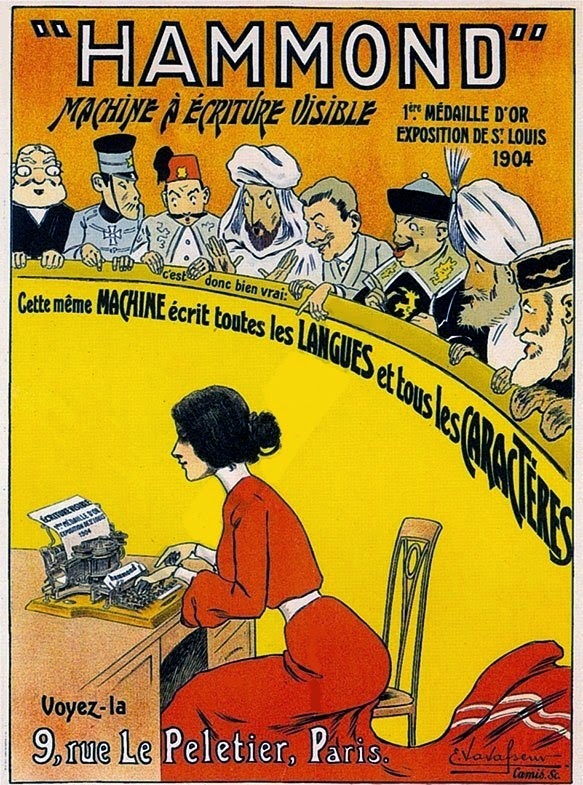 8. The Caligraph was followed by the Hammond, which presents an opening to discuss single type elements - and James Hammond and Lucien Crandall. I just love this poster. Possibly my No 1. 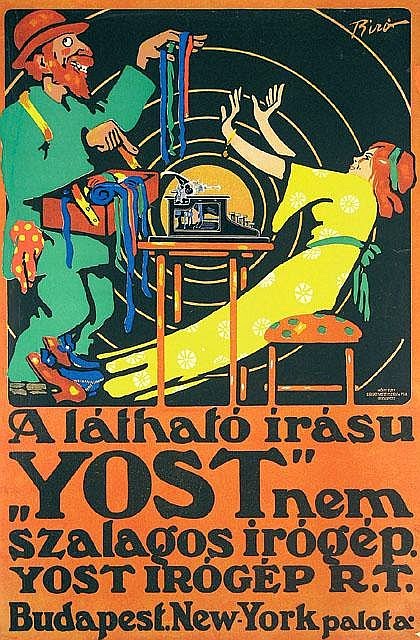 9. As I do this one, though it's a bit of a cheat in this sequence, as it is a later model Yost than the gorgeous upstroke round tower machine with the double keyboard. 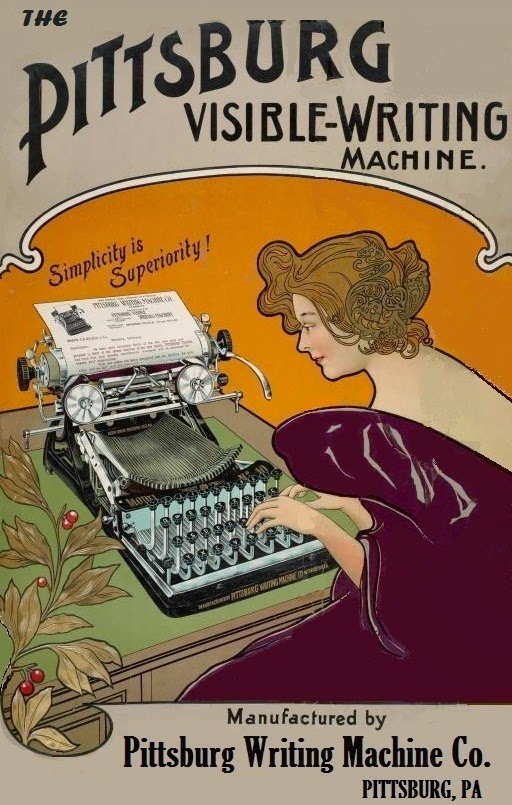 10. With the Pittsburg we will begin to look at the drive toward visible writing machines. 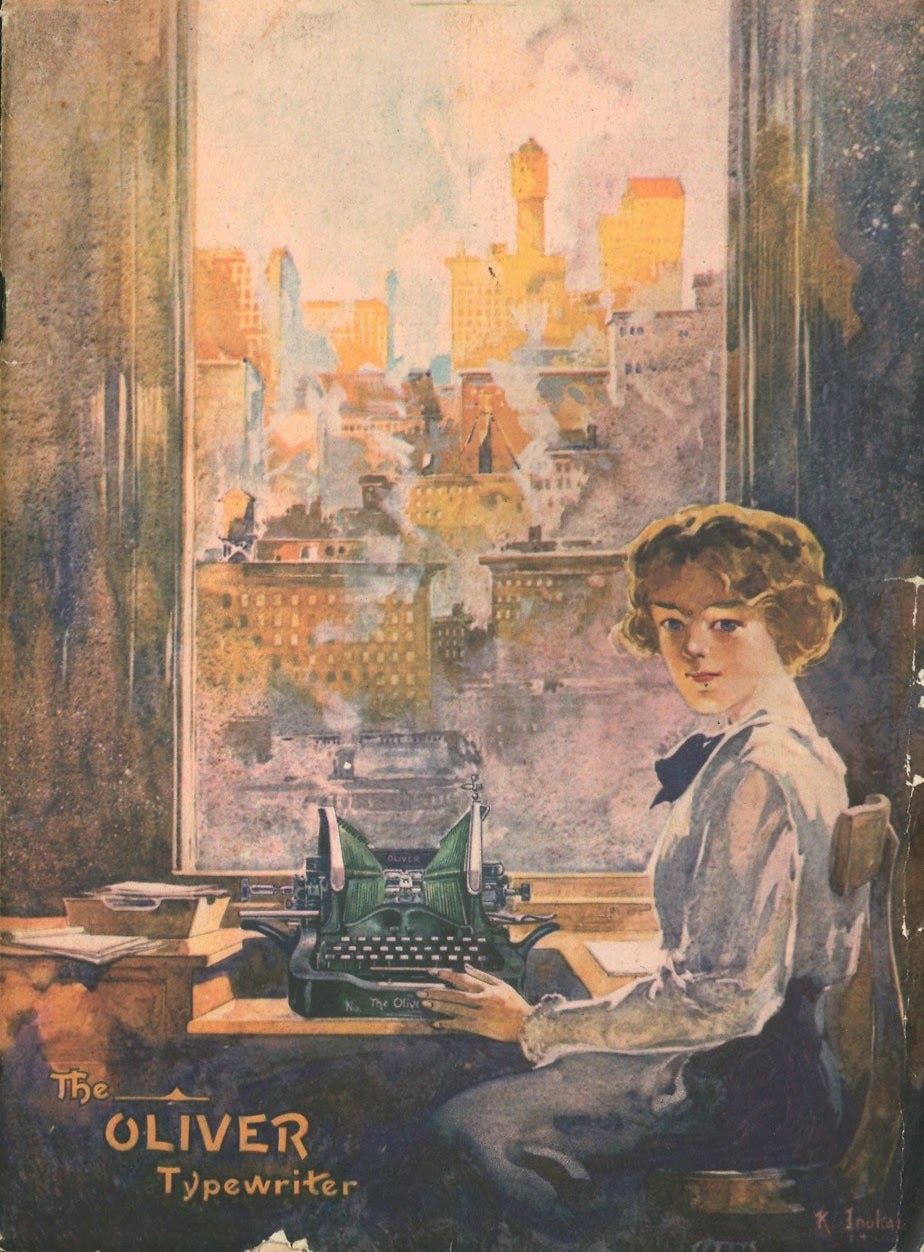 11. Which was at one brief point led by the Oliver - which went to war with Remington. 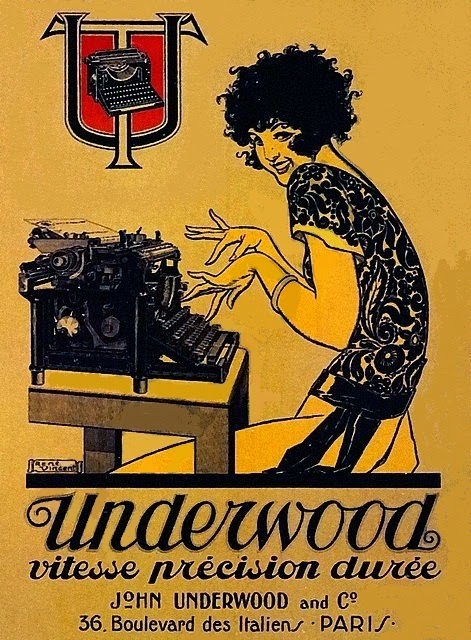 12. Until Franz Wagner and the Underwood came along and laid down the final benchmark. 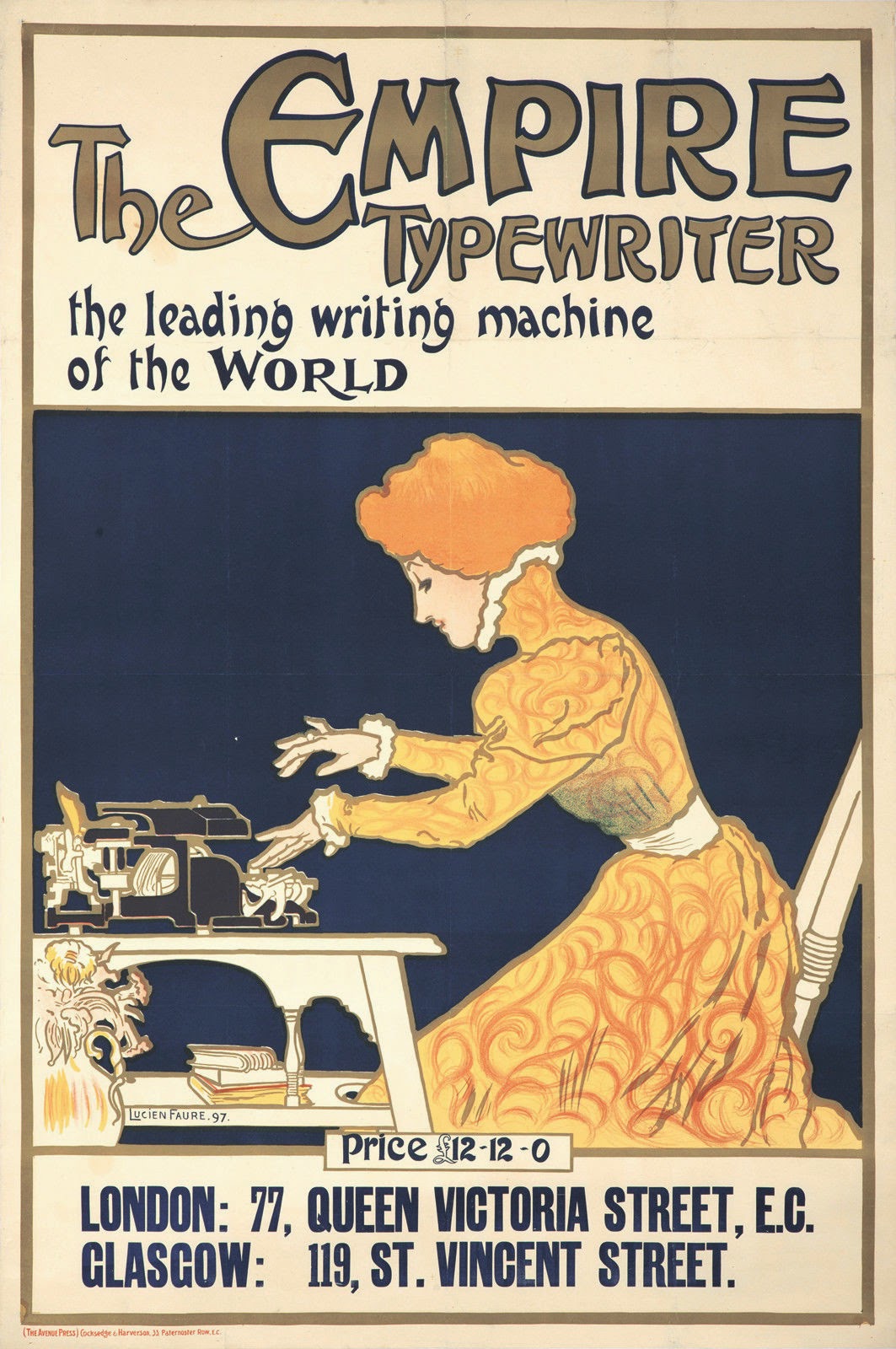 13. Other methods were still investigated, such as the thrust-action Empire from Wellington Parker Kidder. 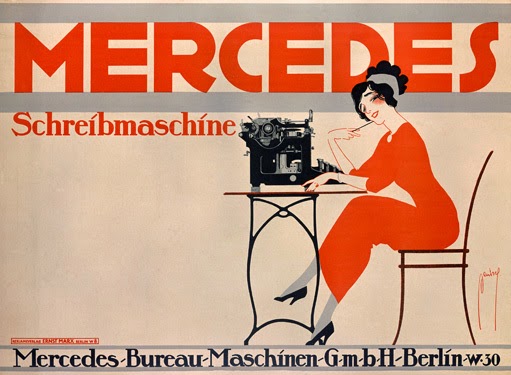 14. Maybe it's not all that relevant, but I can't resist this Mercedes poster. What a charming blush! 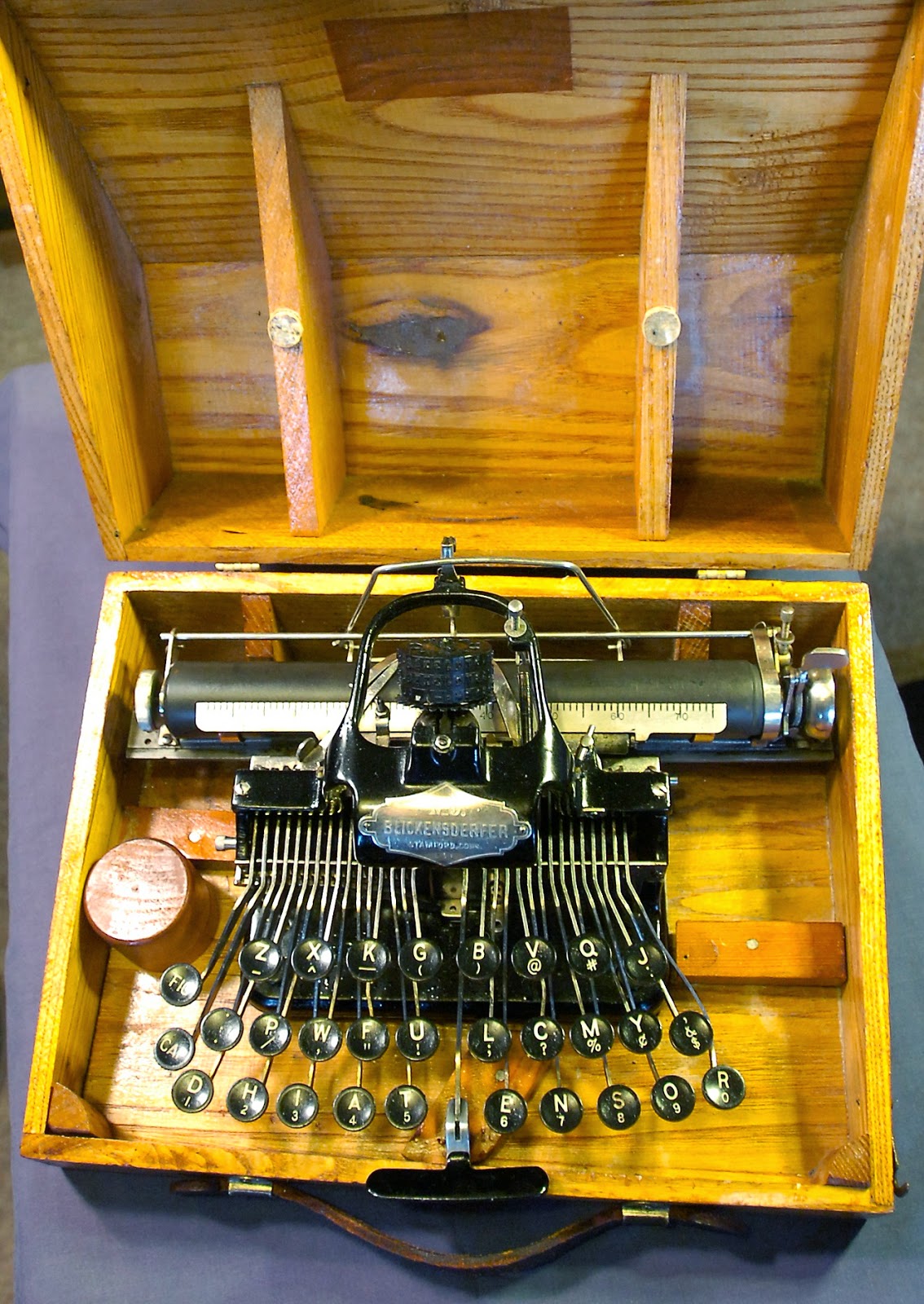 15. And I doubt I'll ever be able to give a typewriter presentation in which I don't rave on and on about the Blickensderfer. Or George Blickensderfer, for that matter. 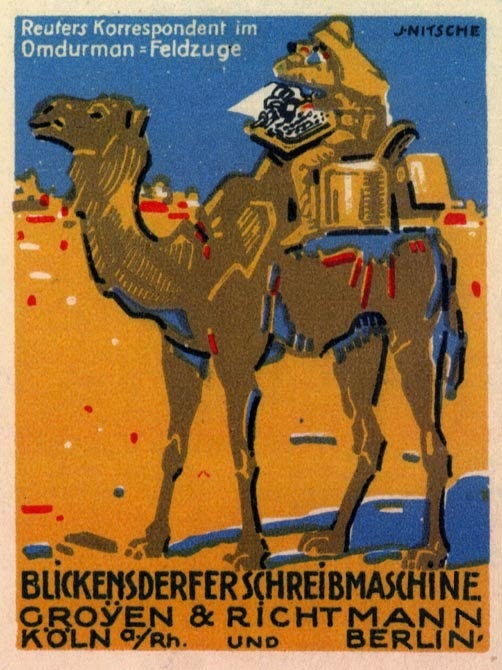 16. Twenty seconds on Lionel James taking a Blick into the Sudan with Kitchener? No worries! Regardless, it's another of my Top 10 images. 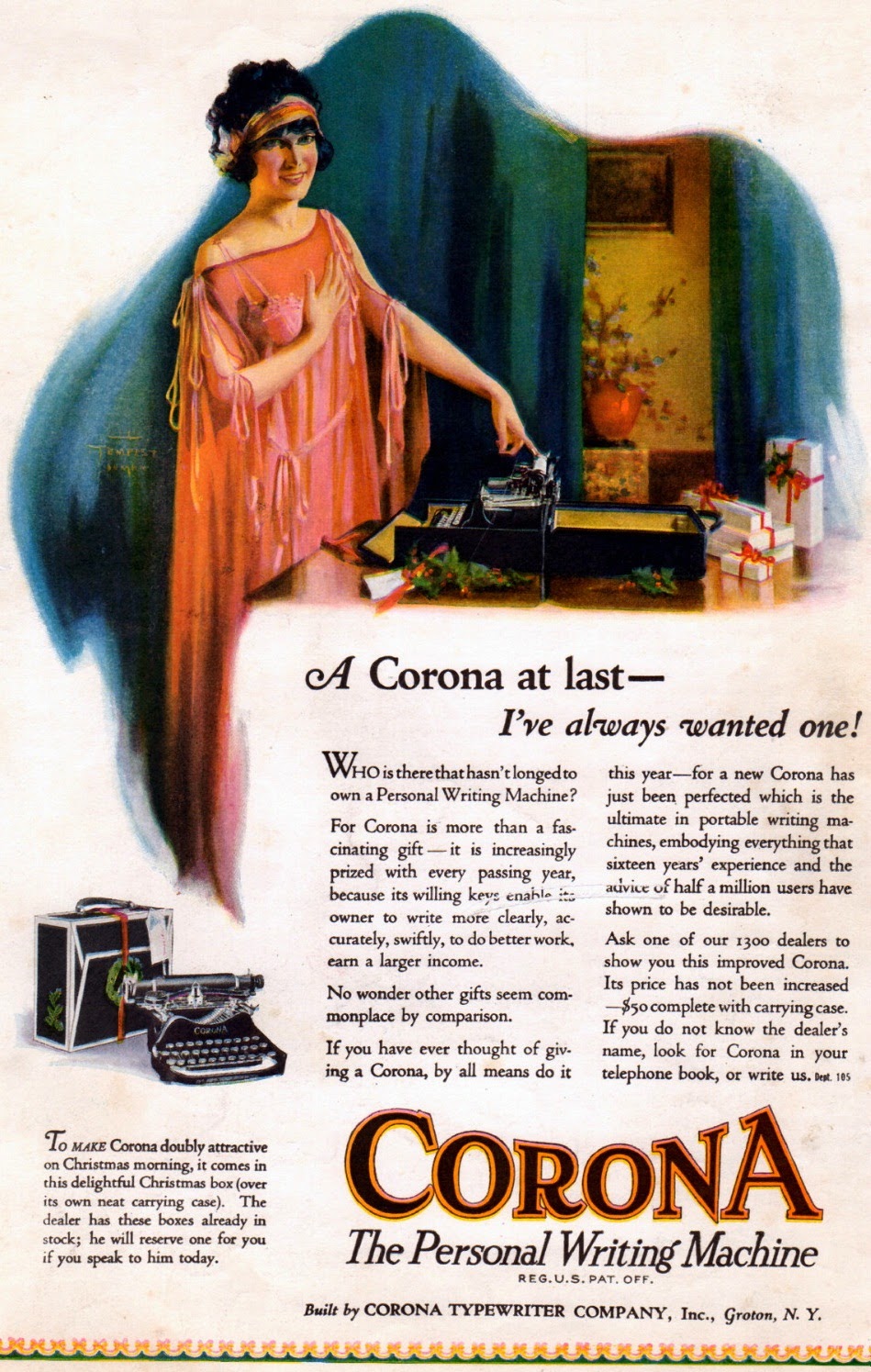 17. And so on to the portables, with Frank Rose, Otto Petermann and the wonderful, wonderful Corona 3. 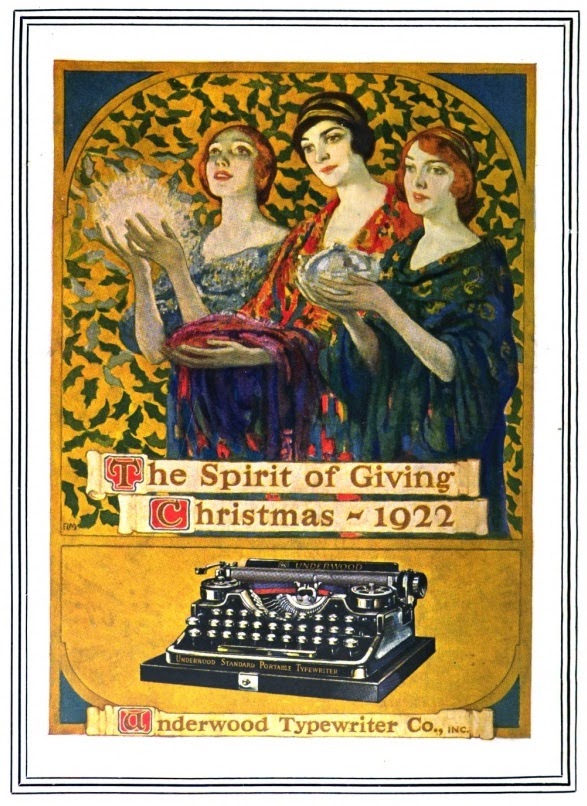 18. Followed by the Underwood 3 and Lee Spear Burridge. 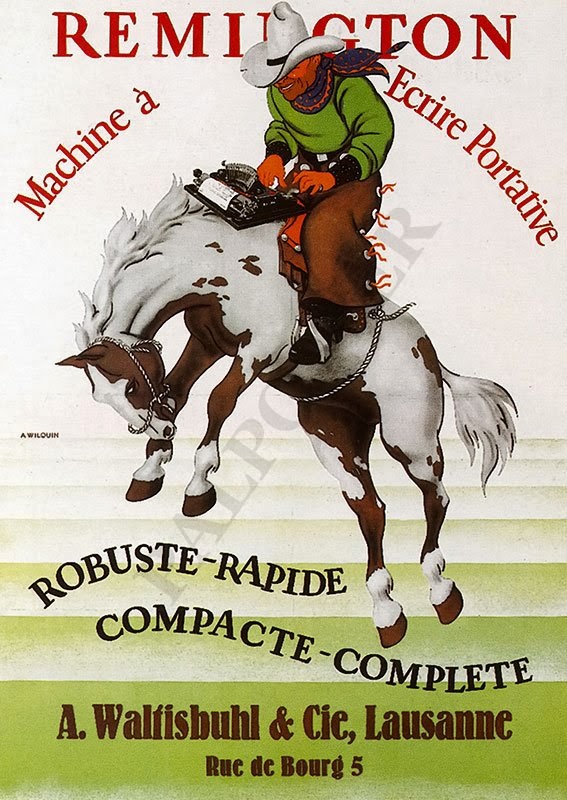 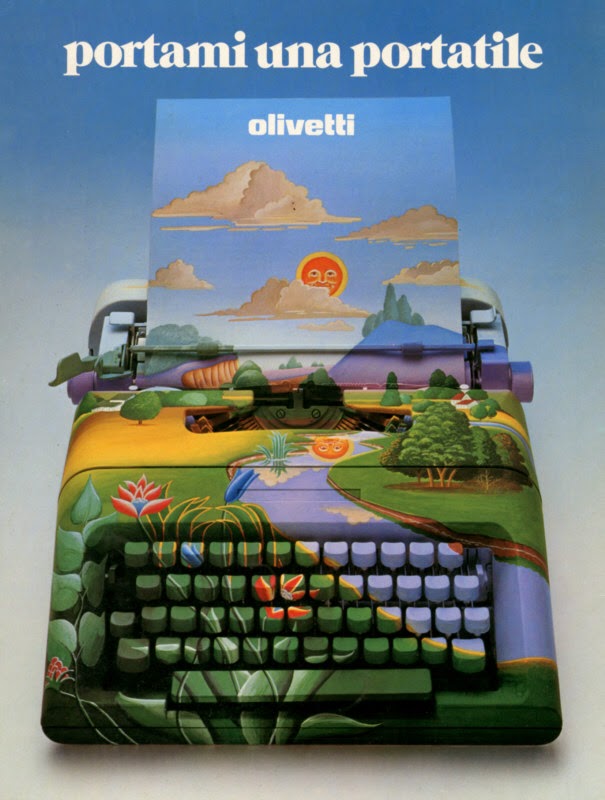 20. Which Olivetti poster to include? Take a pick from about four dozen or more. I just adore this one, though - definitely my favourite among them all.

Posted by Robert Messenger at 22:55

What an effective, and beautiful presentation this will be! I too love the Mercedes poster. Actually, the poster art is a nice way to show the typewriters development as it also shows a visual glimpse of the era which produced them - sort of a visual context.
Good Luck!

Nice selection. I may have to steal some images as backgrounds for my blog! This will be fun.