The Adler Portable Typewriter That's a Triumph, and One Million Thanks 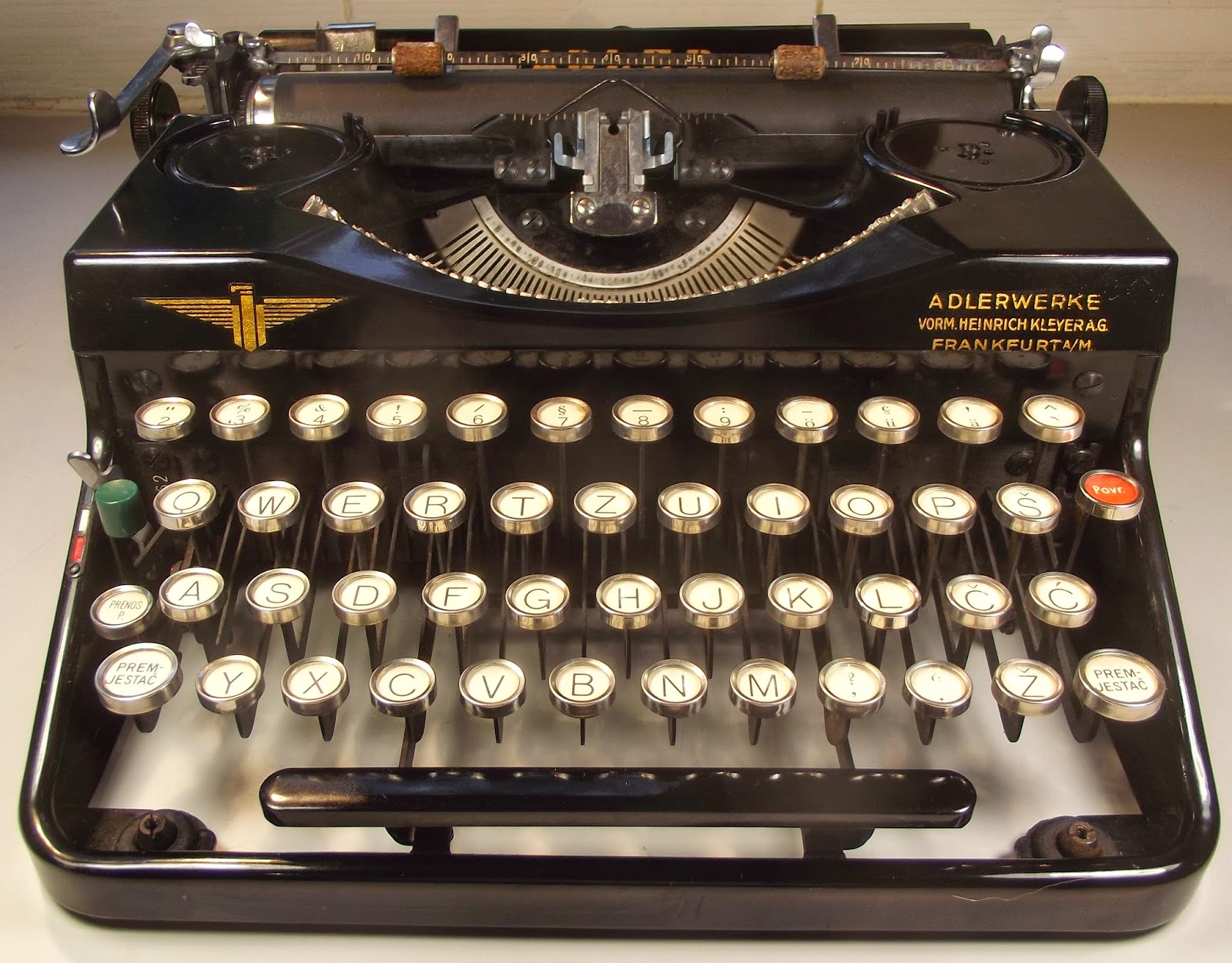 It may look a little different in parts, but this Adler Model 32 is in reality a Triumph Norm. It was almost certainly made in Nuremberg, not Frankfurt. 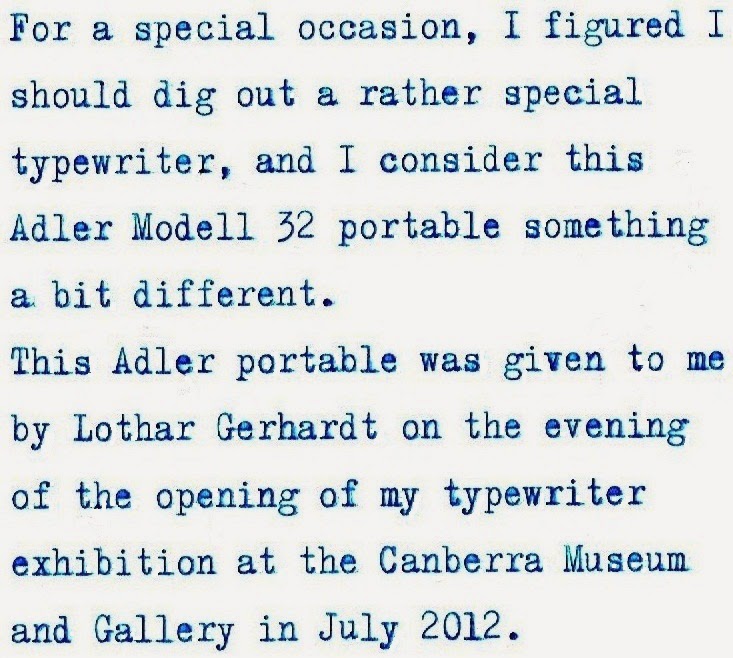 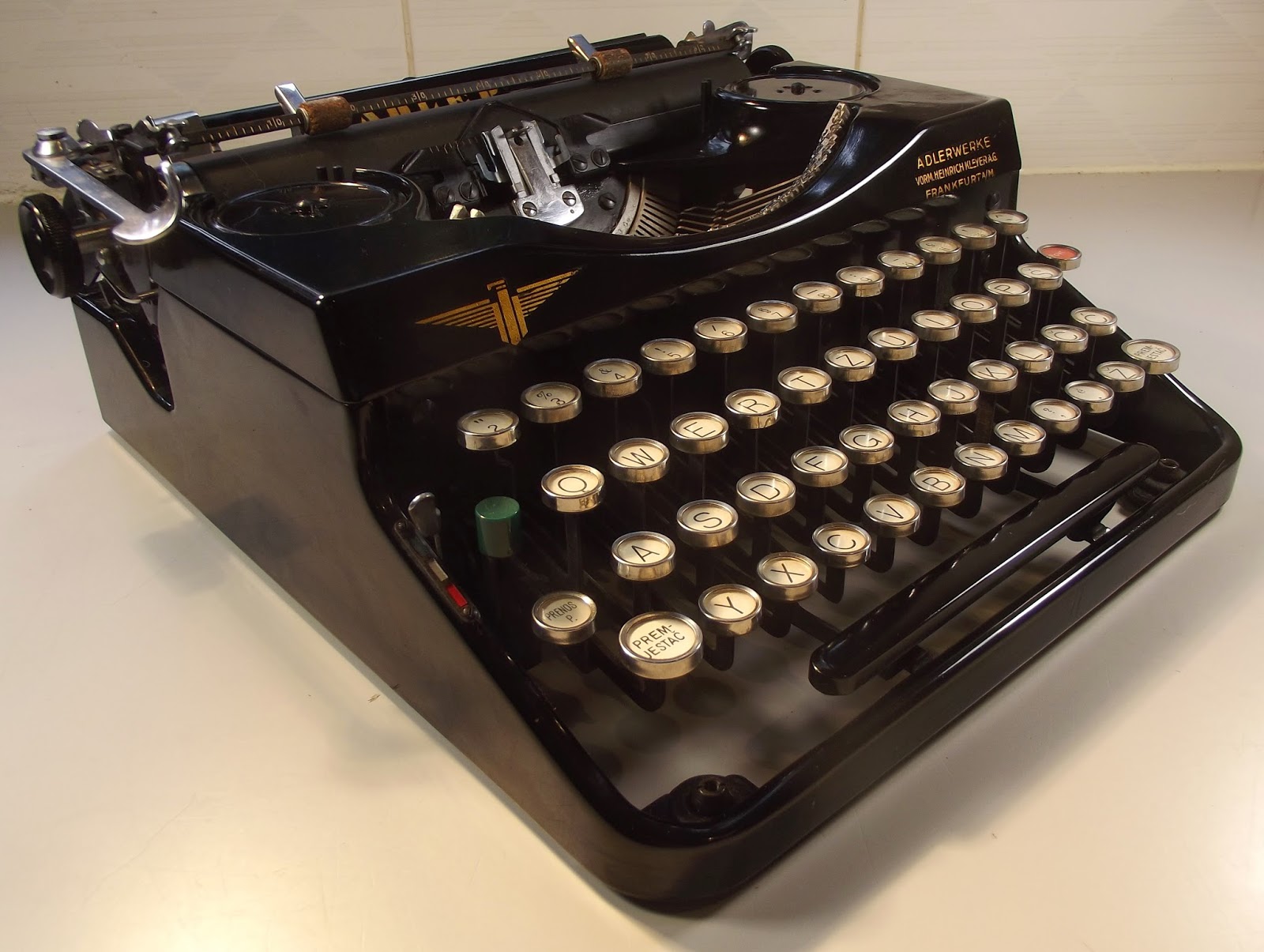 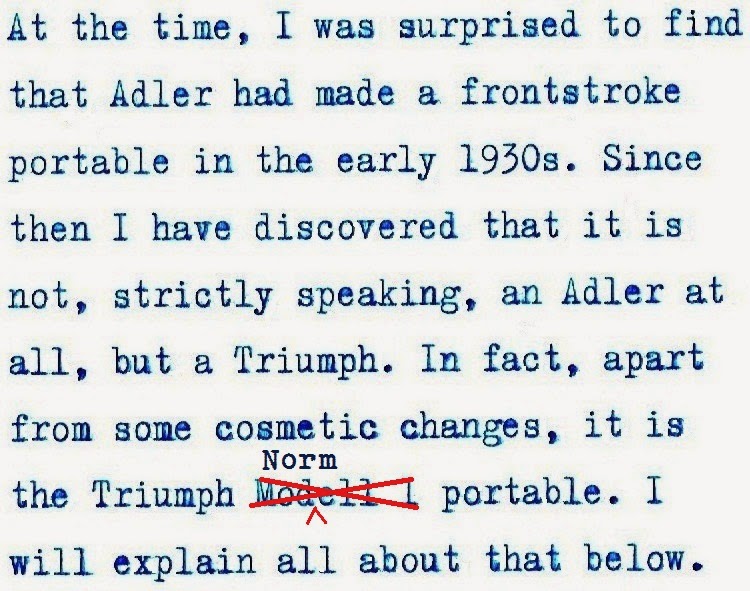 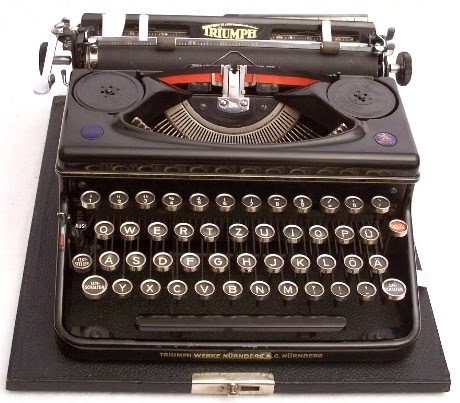 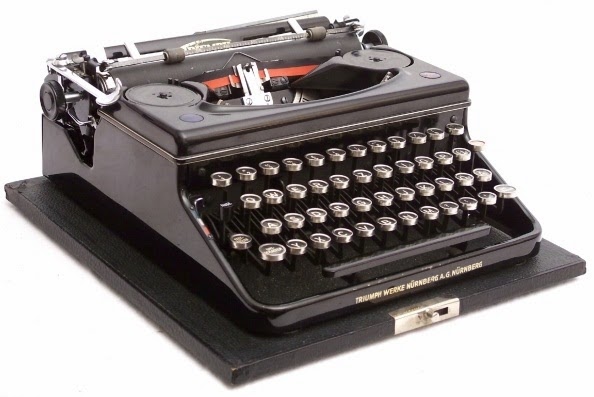 Images: Arnold Betzwieser Collection. This was NOT the first Triumph portable - the Norm succeeded the Klein-Triumph (aka Modell 1, of 1928) in 1934. The paper plate, guides, bail, knobs and levers, switches, and the segment are identical with the Adler Modell 32, but the top plate differs in the front and with its protruding rim. Nor is the Norm above the Norm 6, which was introduced in 1936 and has the more familiar sloping top plate (see below): 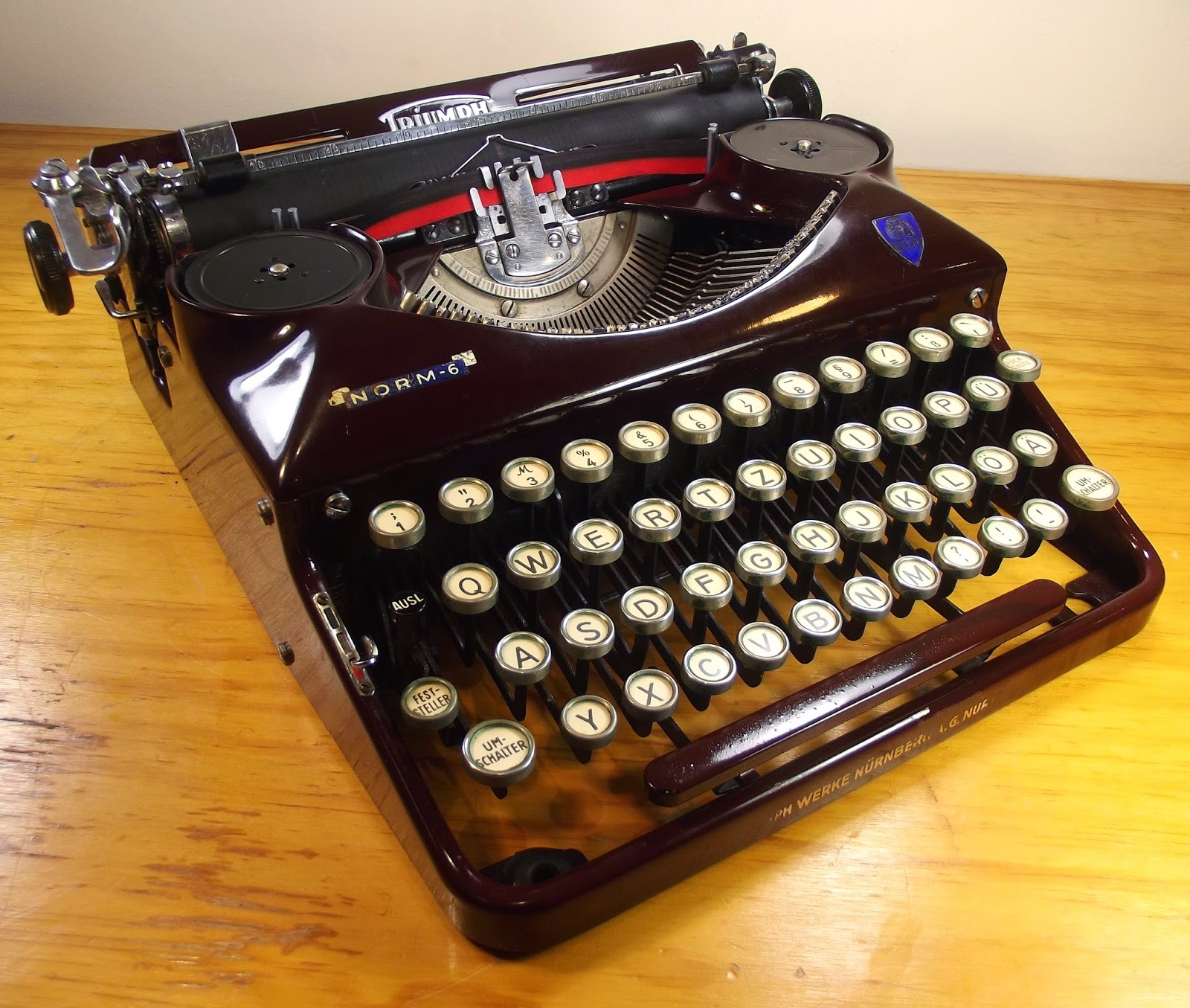 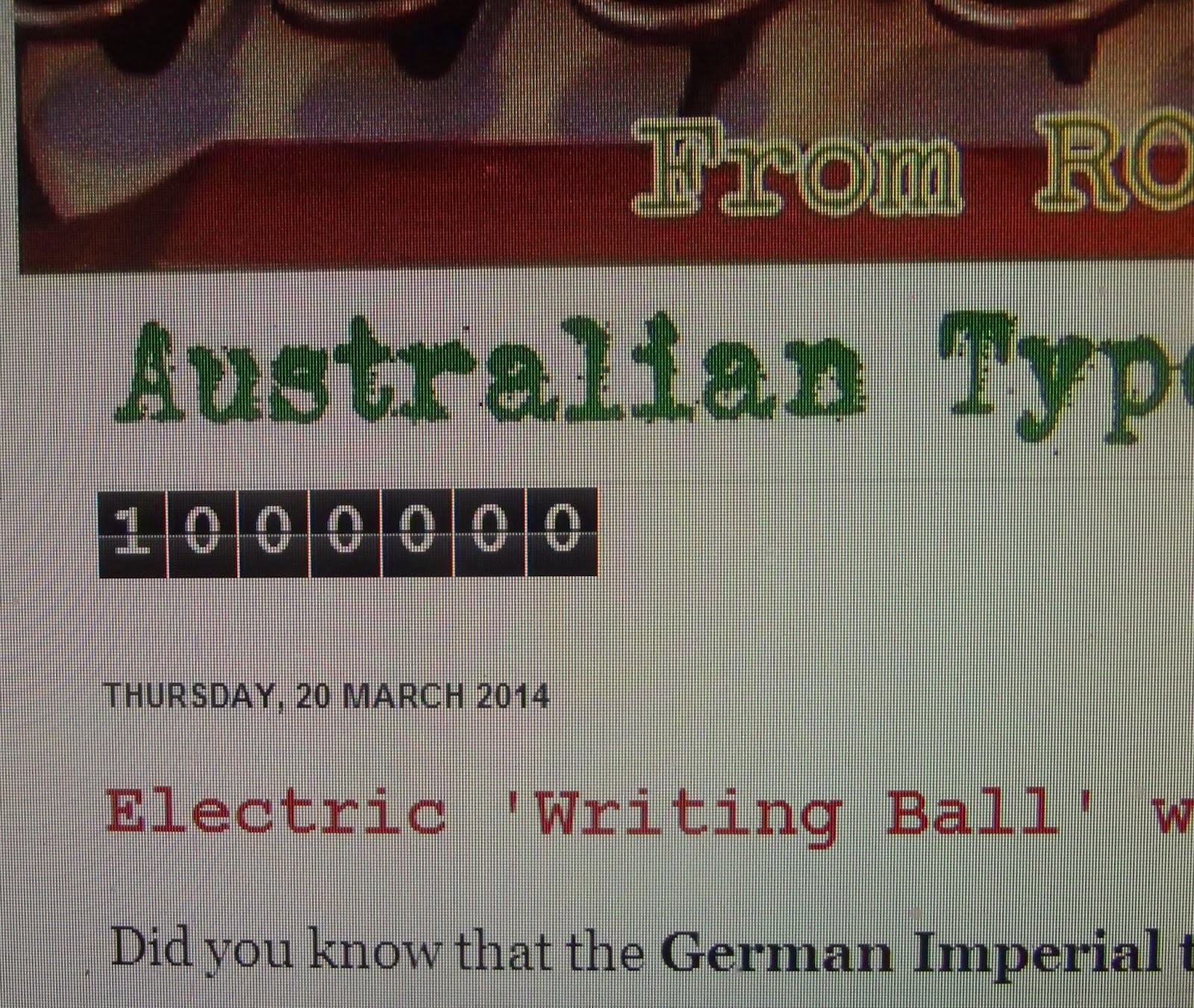 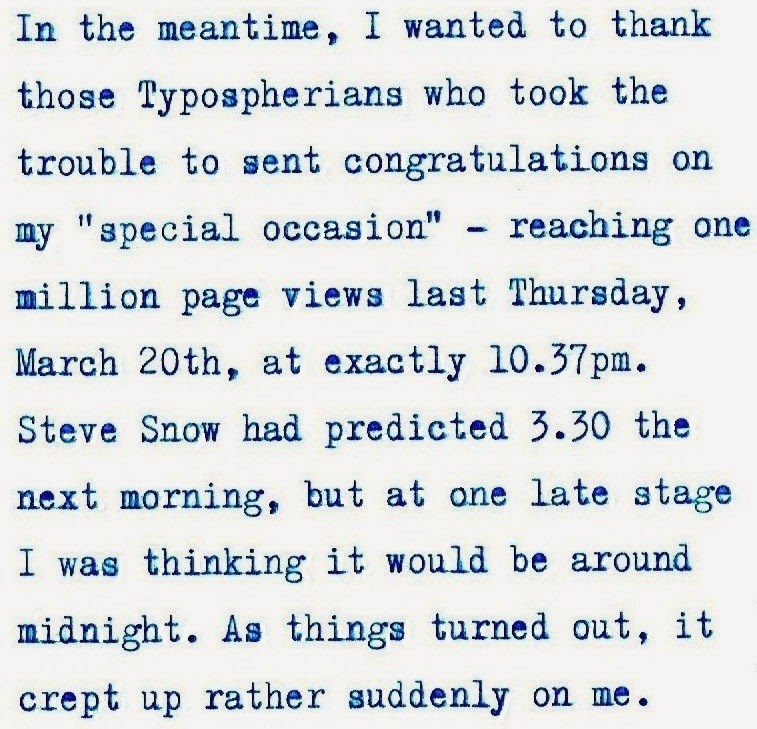 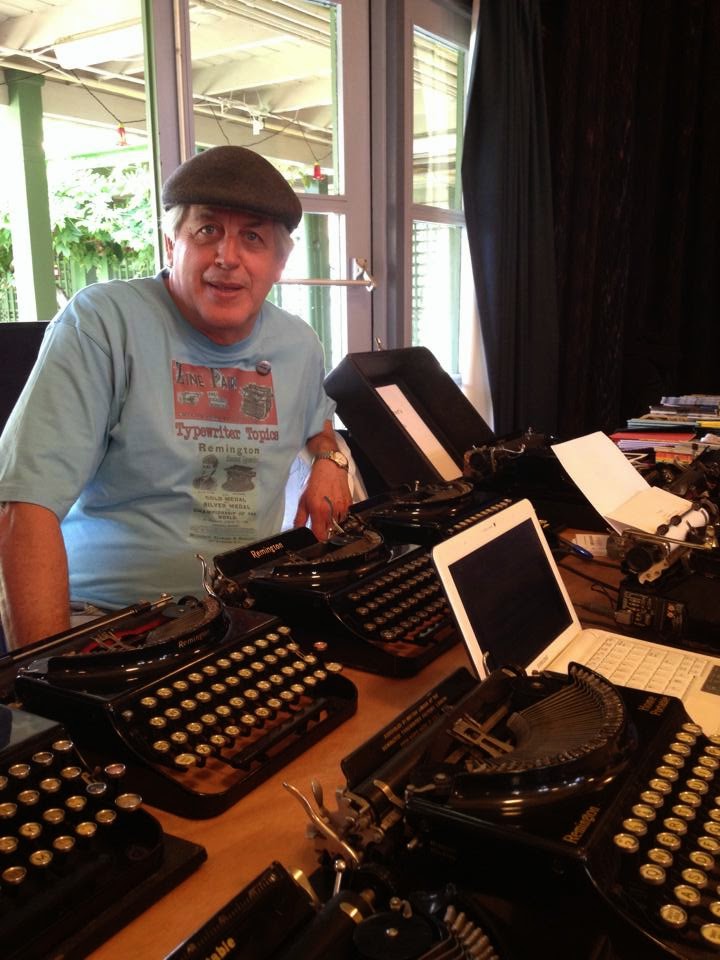 Zinester Nat caught a more relaxed me at the Zine Fair on Sunday. 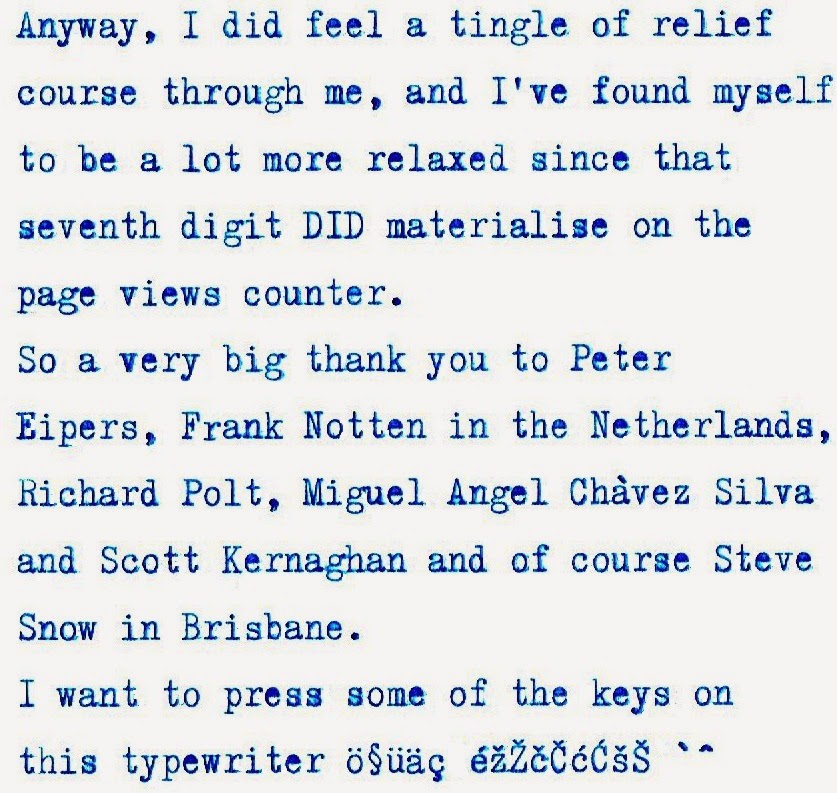 An equally heartfelt thank you to Bill MacLaine, Natalie Tan, Rob Bowker and Gary McGill, all of whom helped guide me over the line! 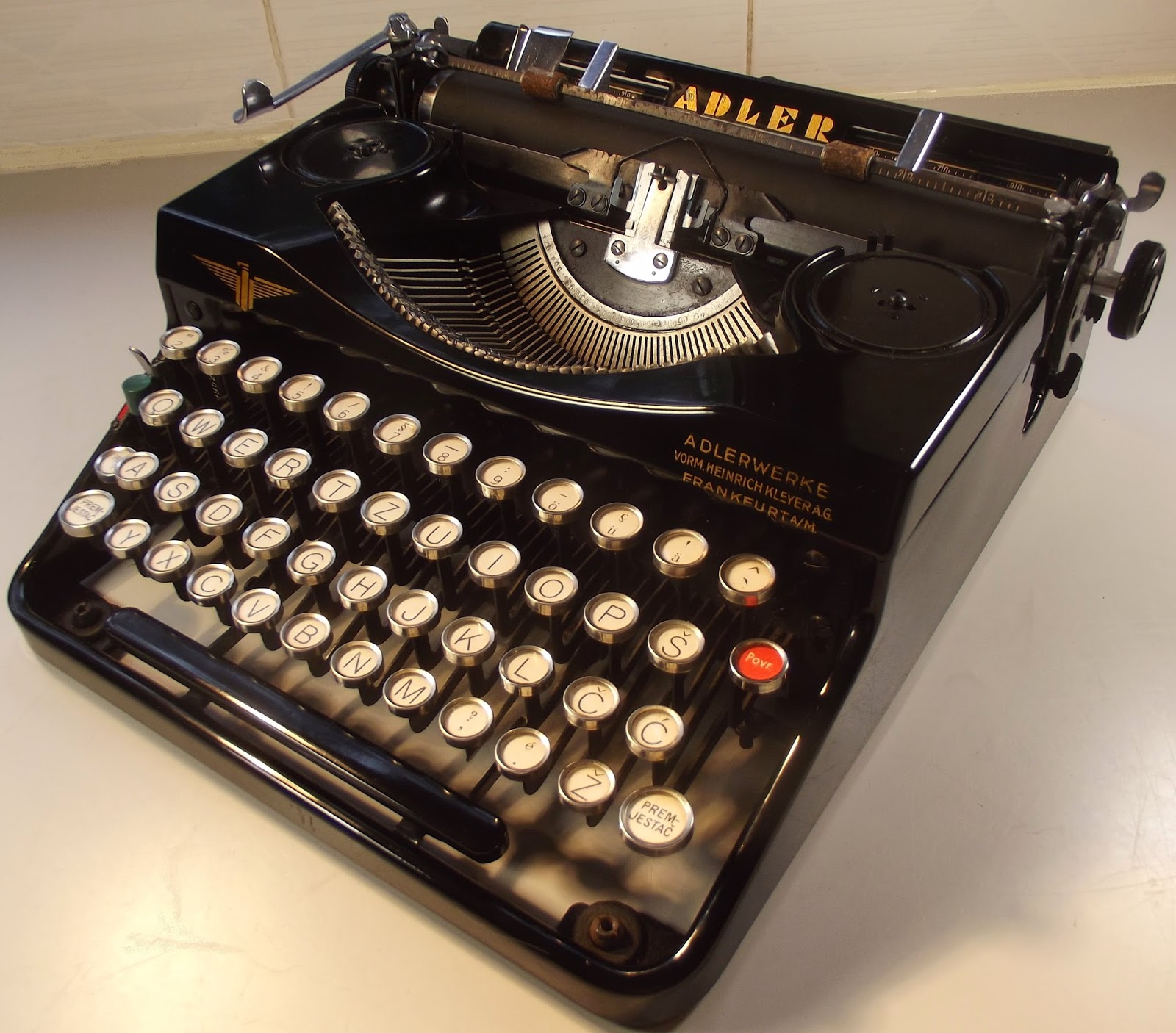 The Adler Model 32 was made as a result of "close co-operation" between Adler and Triumph following the Great Depression of 1929-1930. The extent of that "co-operation" is not yet known, at least by me, but it would seem highly likely - indeed, almost certain - that the Adler frontstroke portable, and the standard of the same period, were actually made by Triumph in Nuremberg, not by Adler in Frankfurt. What is known is that Adler continued to make thrust-action typewriters (notably the Favorit portable) in Frankfurt. 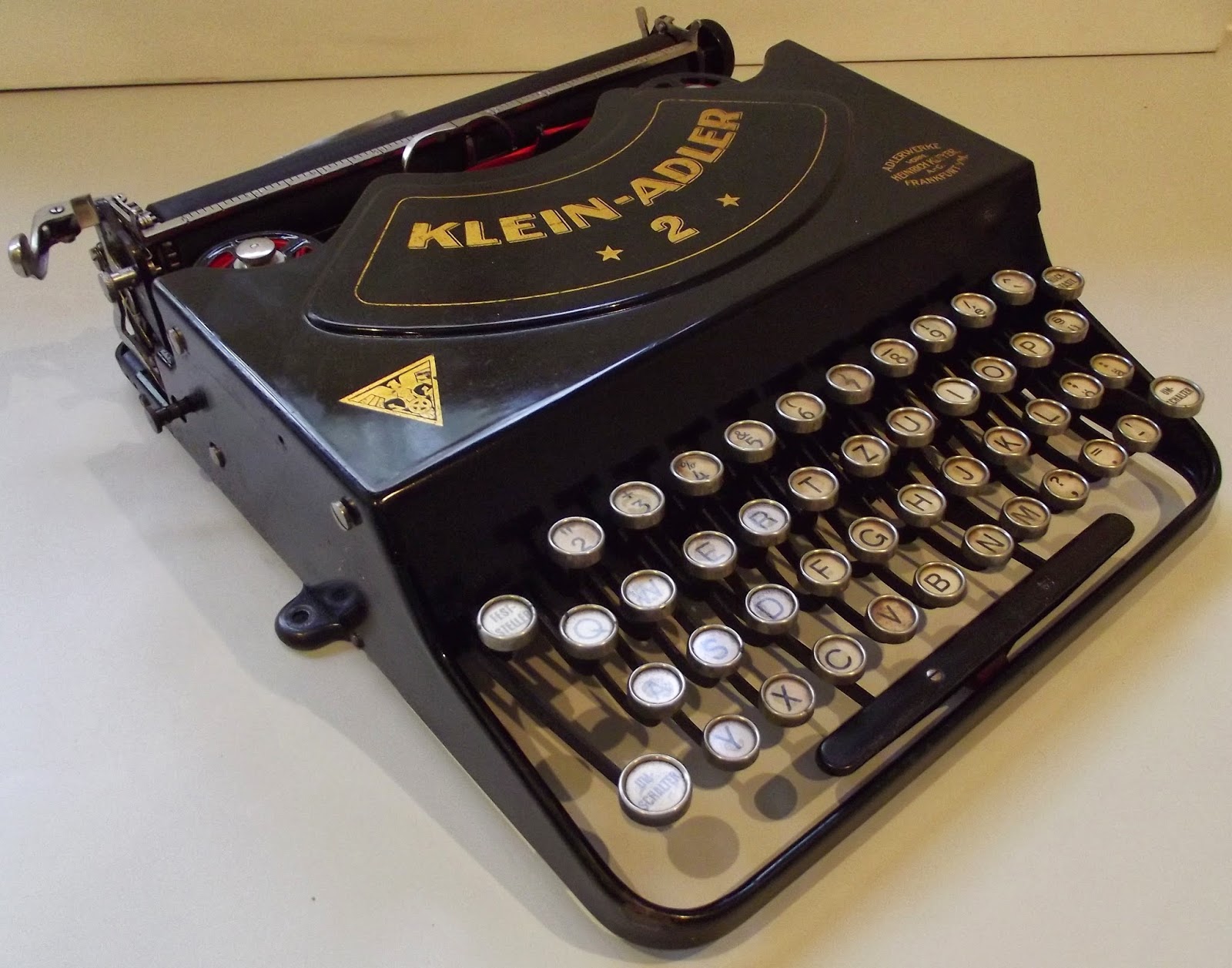 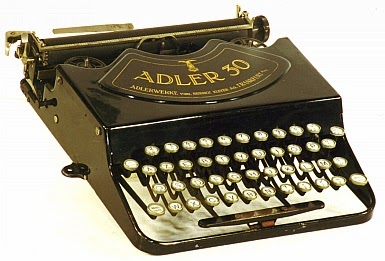 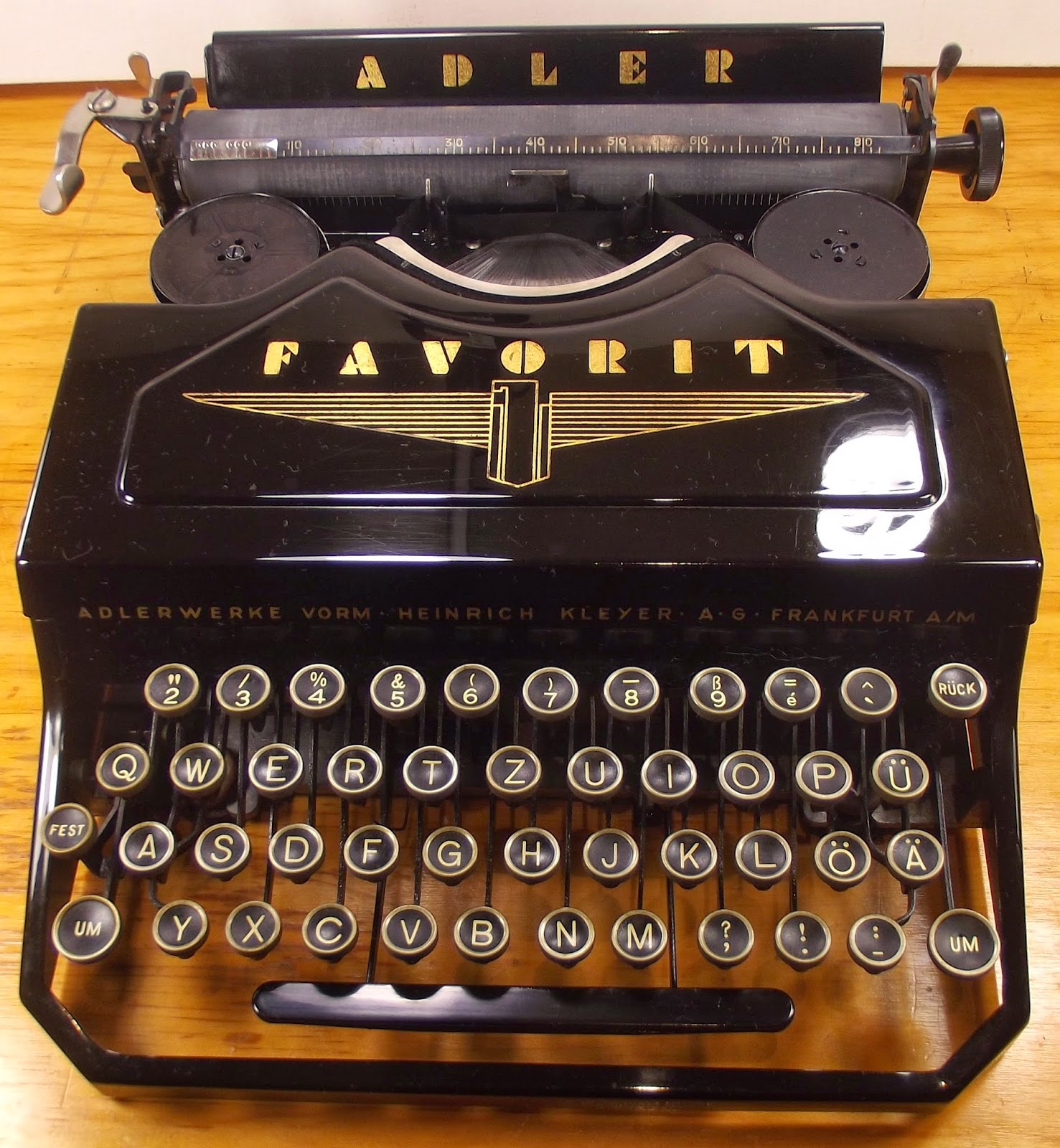 Adler Favorit (1935)
It is also not entirely certain when the Adler Modell 32 was first made - accepted wisdom says 1932 - and whether it came out before or after the Triumph Norm. Whatever, it is a Triumph, not Adler, design. We do know that the Triumph Norm, upon which the Adler Modell 32 is so directly based, came about as a result of a complete re-development of the 1928 Klein-Triumph (aka Modell 1): 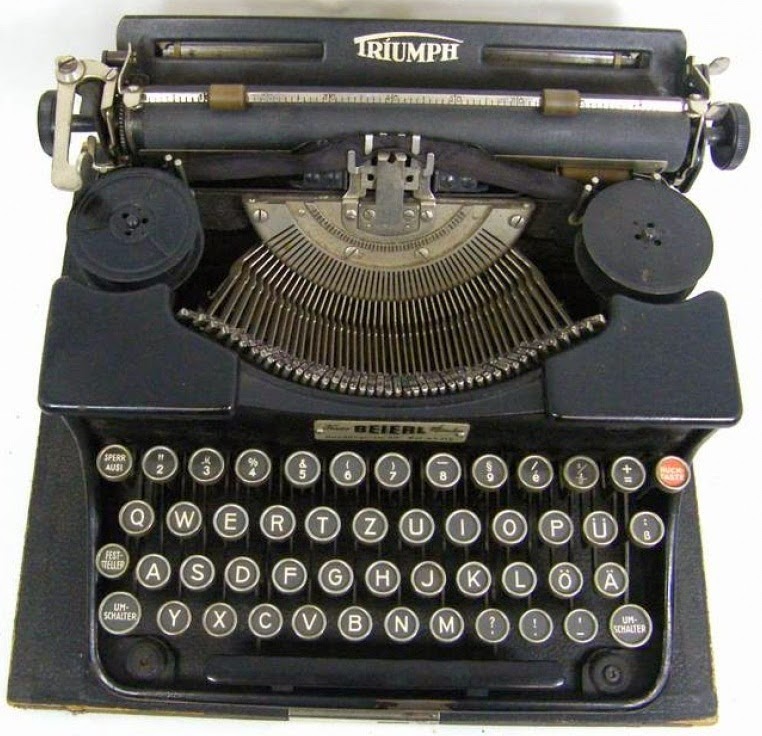 Features of the Klein-Triumph were kept on the Norm (that is, "standard"), such as the paper plate and guides and the platen lever and knobs, but the segment, vibrator and printing point were re-designed.
The thinking appears to have been that both Adler and Triumph needed to introduce design changes in order to recapture market share. There is no doubt Adler had been very badly hit by the Depression. From more than 22,600 ordered typewriters in 1929, Adler sales fell to below 6000 in 1932. The Adlers 31 and 32 clearly indicate the Frankfurt company had decided it needed to venture into the frontstroke market, while continuing to rely heavily on its thrust-action machines. Meanwhile, in Nuremberg, Triumph had suffered similar financial setbacks. It was not until 1935-36 that Triumph was able to rebuild its workforce back to the pre-Depression levels of 1700. 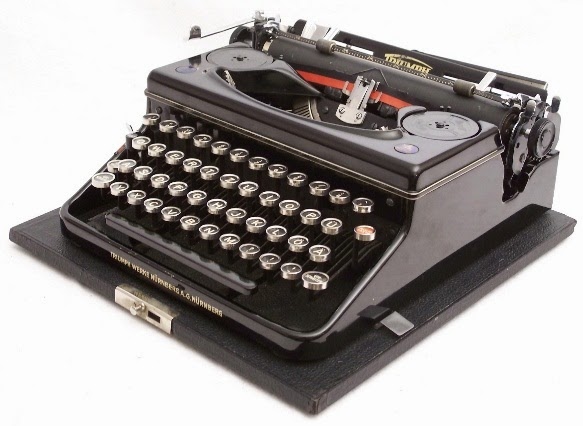 Arnold Betzwieser's Norm
In Frankfurt, Adler had sought "economic solutions" and "rationalisation opportunities" from the very onset of the Depression.  When it struck a "co-operation" deal with Triumph, one almost immediate upshot was the Adler 31 standard of 1931, which was "nothing but a Triumph 10". 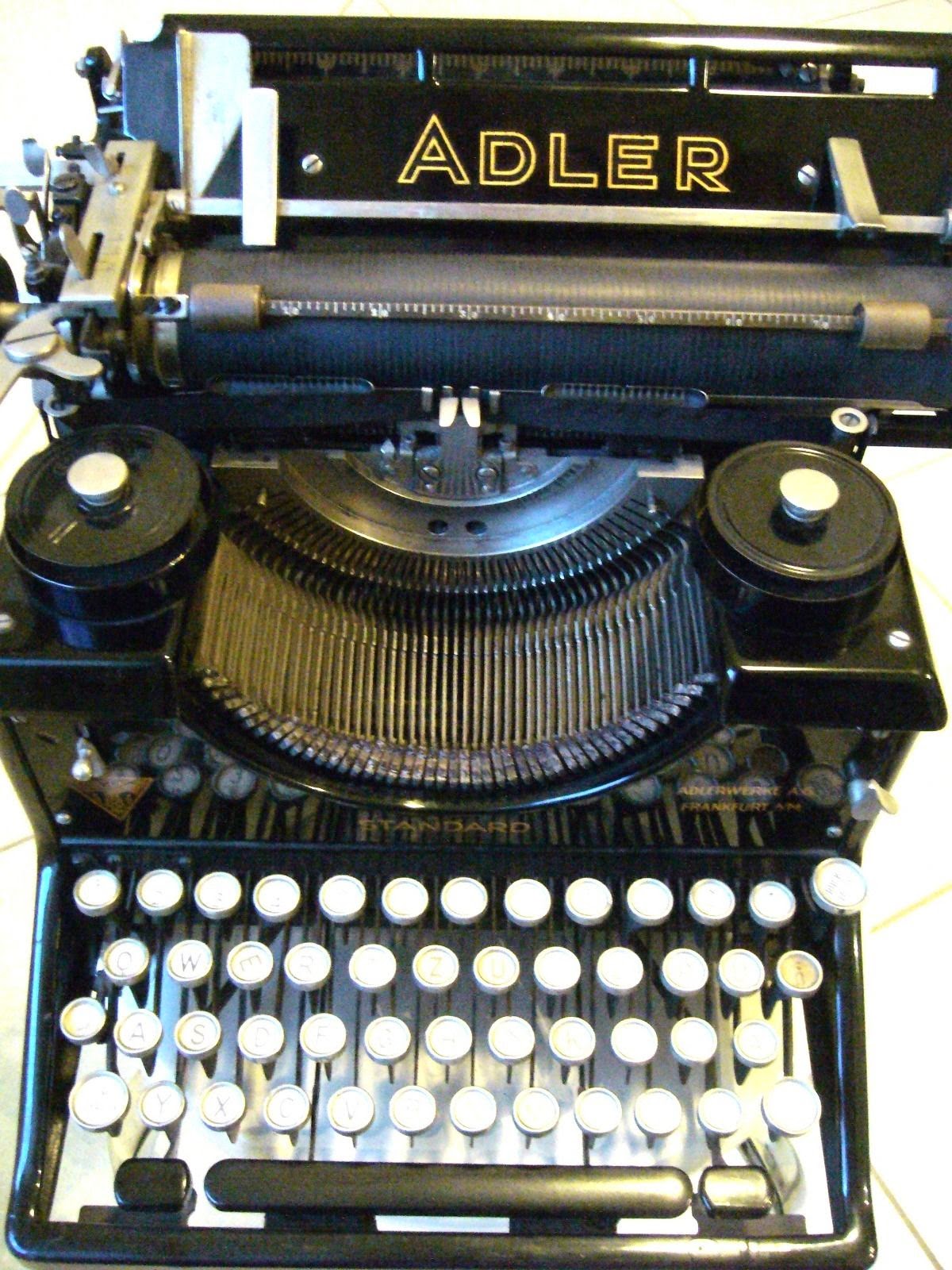 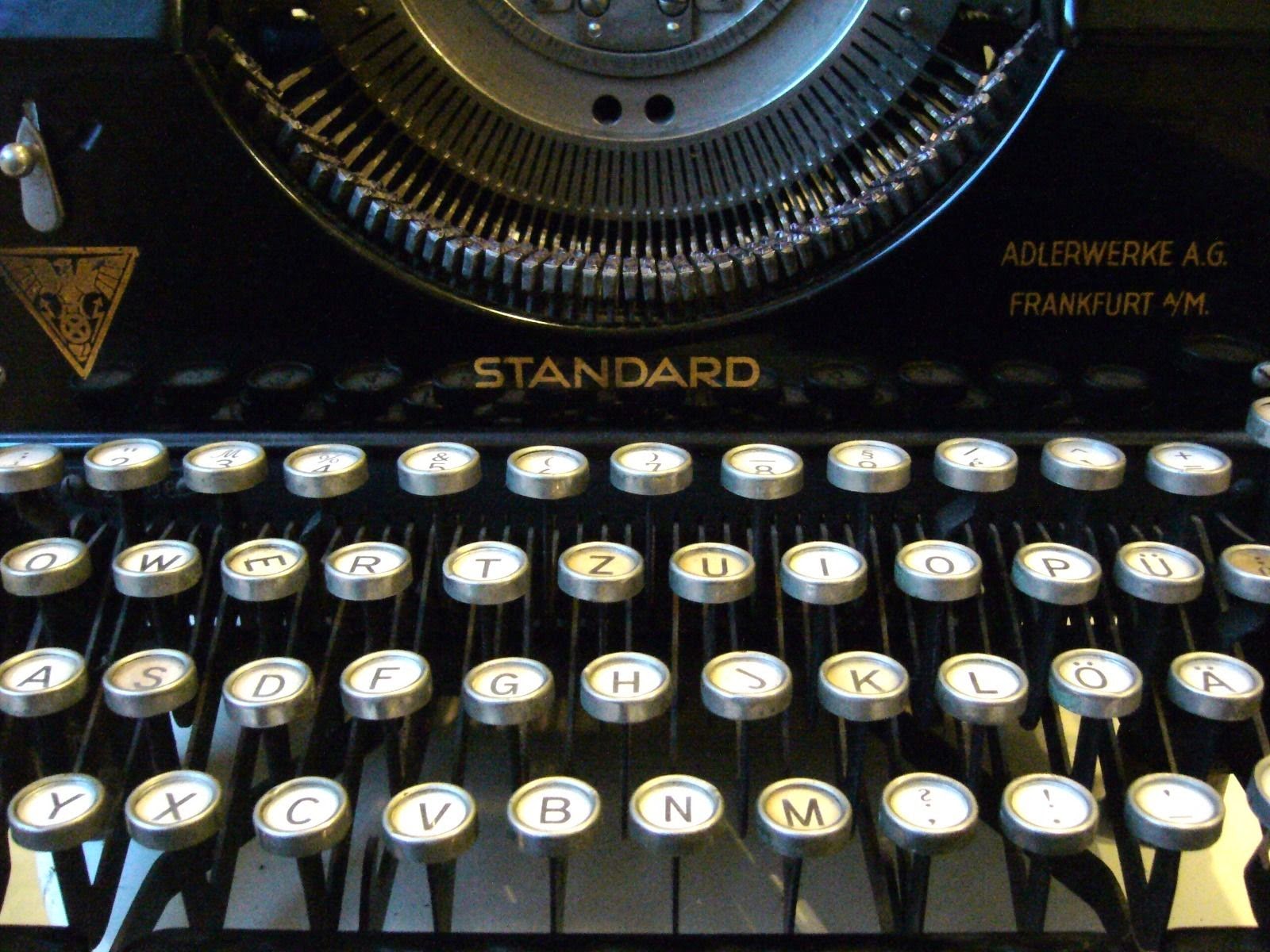 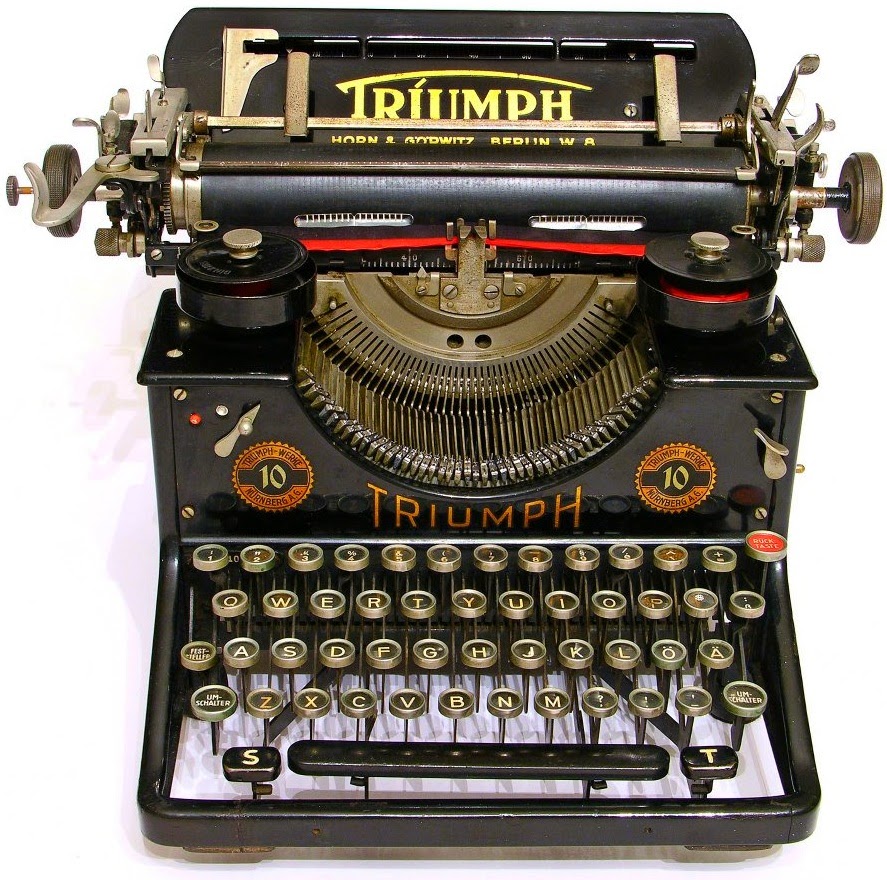 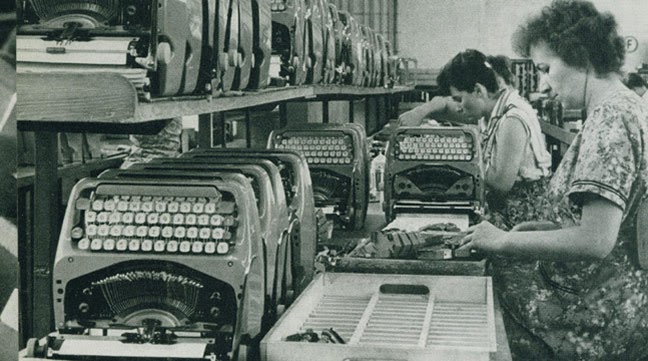 Twenty-seven years after Triumph and Adler had reached their Depression-beating "co-operation" arrangement, the close relationship between the two typewriter makers came back to haunt them. At the end of 1957, Fürth-based radio and television set manufacturer Max Grundig  purchased Triumph share capital and the Nuremberg factories and used that company to buy a cross-shareholding in Adler’s Frankfurt plants. The two companies officially became one, soon to be owned by Litton Industries.
Posted by Robert Messenger at 19:51

Great information on the Adler. One could say the Adler rises in Triumph. Seems like the quality of the German machines started to go down starting with Grunding and fell completely apart with Litton. Similarly with American machines. Big corproations seem to have a way with ruining good products.

I'm glad you wrote about the Adler 32. I got one of these not too long ago but haven't written about it added it to my list online. Nice typewriter. I was a bit surprised to find that the top plate is plastic.

CONGRATULATIONS ON THE 1 MILLION!!!!!
On the Adler, Triumph business, we need to discuss this a bit further.

Well done Robert on the million. The car's gone round the clock, so don't be surprised if thing start dropping off! I'd have said that Adlers of that era would be sliders not swingers and you have unraveled that one now. Back to 1970's RaRo catalogue - no peace for the wicked.

Happy one million - for us all who benefit so, and you who gets to retrench, and rethink!
Whether they're Adlers, or Truimphs, they are beauties. Some day I hope I'll have one, too.
Do you know any history, or juicy stories about the Adler Universals (1950's onward)? Thanks to advise from Rob Bowker, Richard P, Mark Petersen, and our "celebrity" repairman Bill Wahl, I've just gotten mine operating after a year of attempted repairs. What a great caring, sharing, community we have!
So, Mr "One Million" slow down but don't go away!!

10:37pm the day before! Wow! A fitting typewriter for the occasion. What a beauty.

I've yet to meet an Adler or Triumph that I didn't love. These are wonderful machines and your collection is gorgeous!

Congratulations on reaching the million mark!

Currently bidding on an Adler J5, wanted to know more about the Adler brand. As always, you were my first stop - the great and powerful Oz. ~Tom~