I've made a tentative start on what I think may be my most challenging restoration job, on this 1918 Royal 10 standard typewriter. To put it bluntly, it's in pretty bad shape. Decades of neglect have resulted in a massive coating of rust, grime and gunk.
Yet I'm also more excited about this undertaking than all the others I've tackled this week. I think it will be my last "booty" clean-up for a while, and I'm determined to transform this Royal back into something beautiful. When I spoke to John Lavery about it last week, I said, "The drawband is wrapped around the platen, but I think I can get it working."
"Good luck," said John.
So far, about the only thing I have achieved is to get the Royal typing. I've said it before and I'll say it again: there's no greater joy to be had in the whole wide world than to bring an old typewriter back to life. That sound it makes, as the carriage clicks along, the typebars rise and fall and the bell rings, probably for the first time in at least 60 or 70 years, is impossible to beat. The thrill that races through you when you get a battered, heavily corroded old beast like this working again is simply second to none. 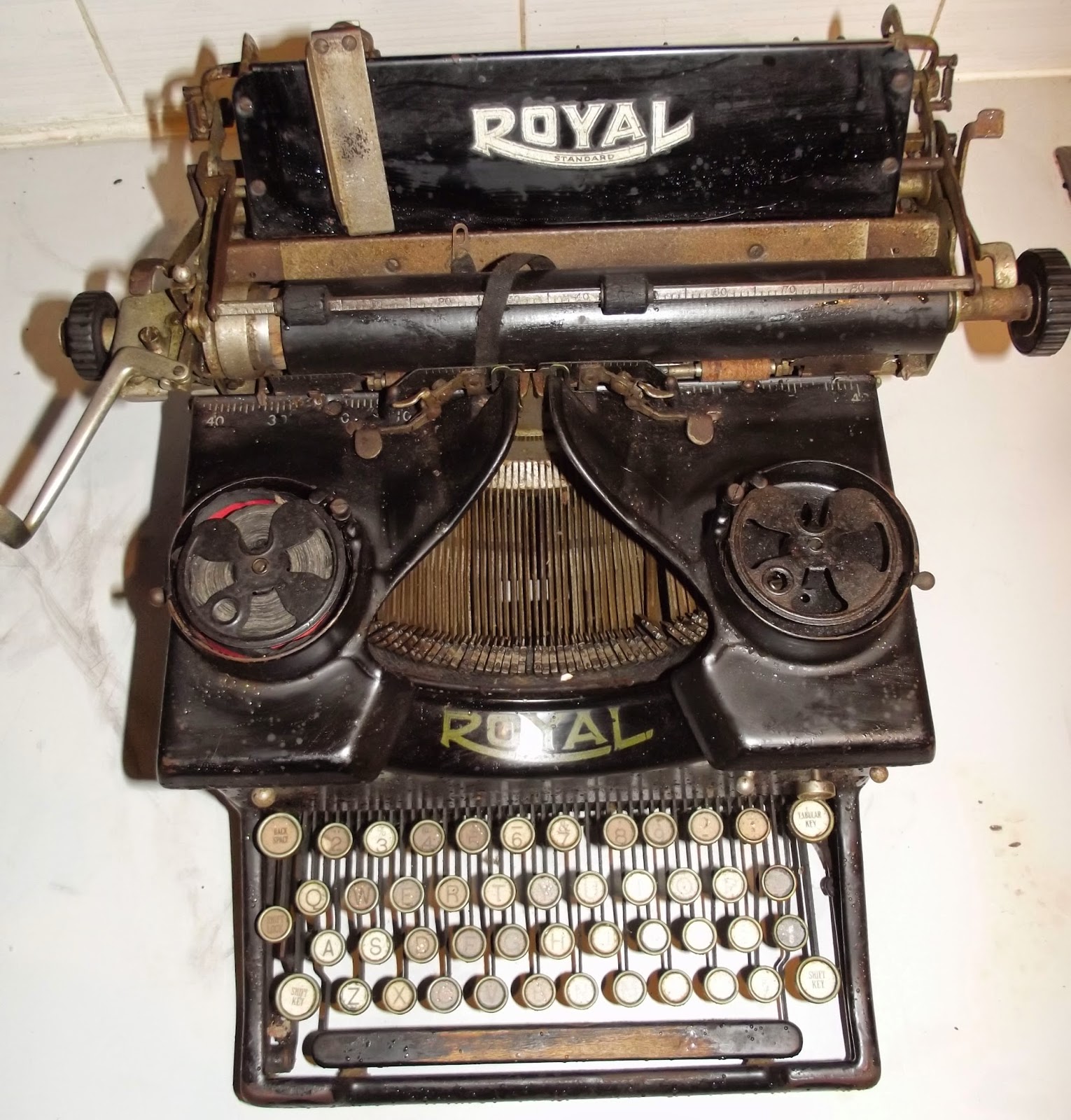 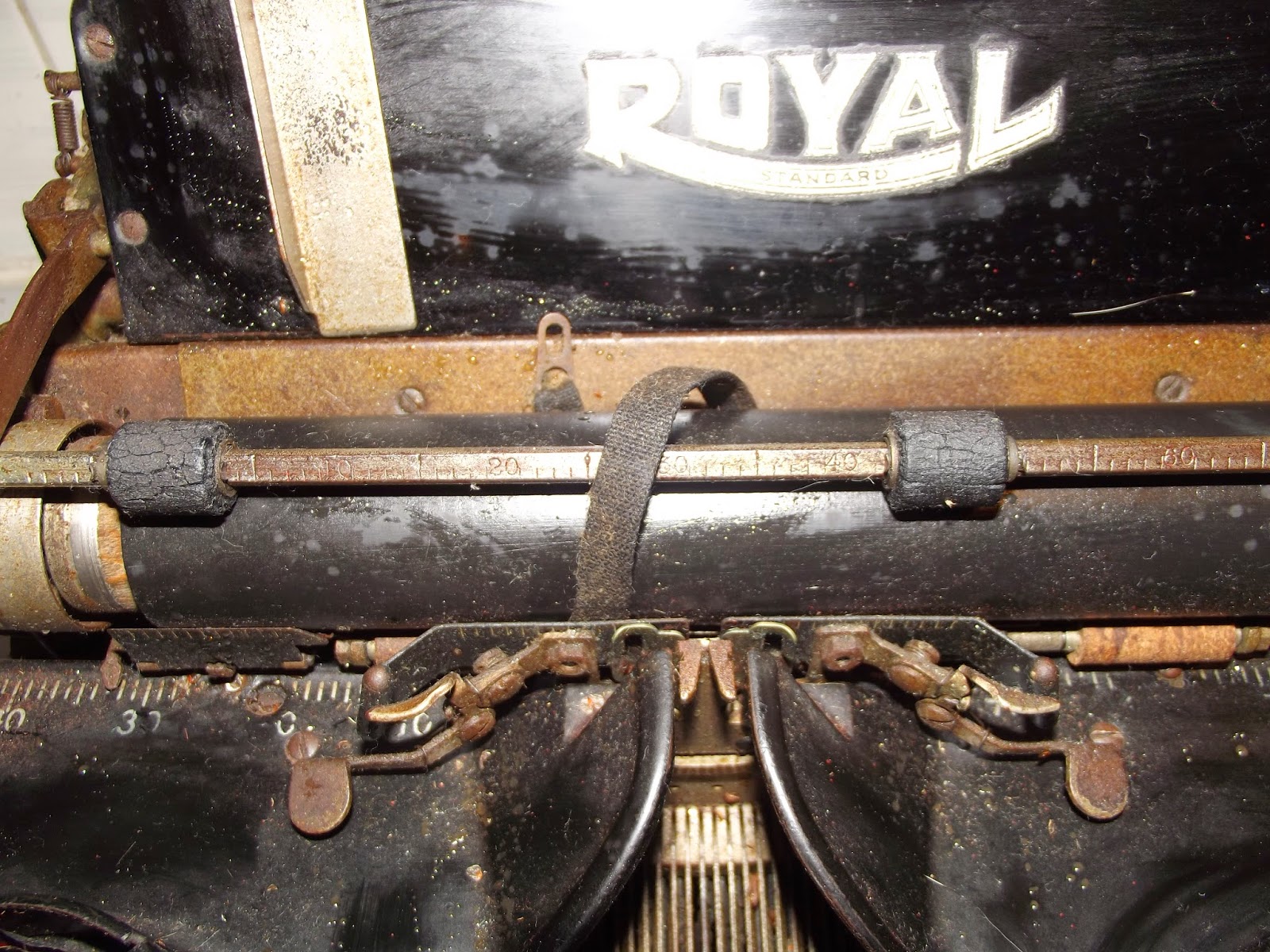 The margin-setters are hard up against one another in the middle of the bar, and I haven't yet managed to shift them. I have run out of the degreaser foam and will now have to wait until the morning to get some more. When I give this machine a foam bath tomorrow, I'm sure of few other things will start to free up. But the rust is going to be the biggest problem. It's horrendous: 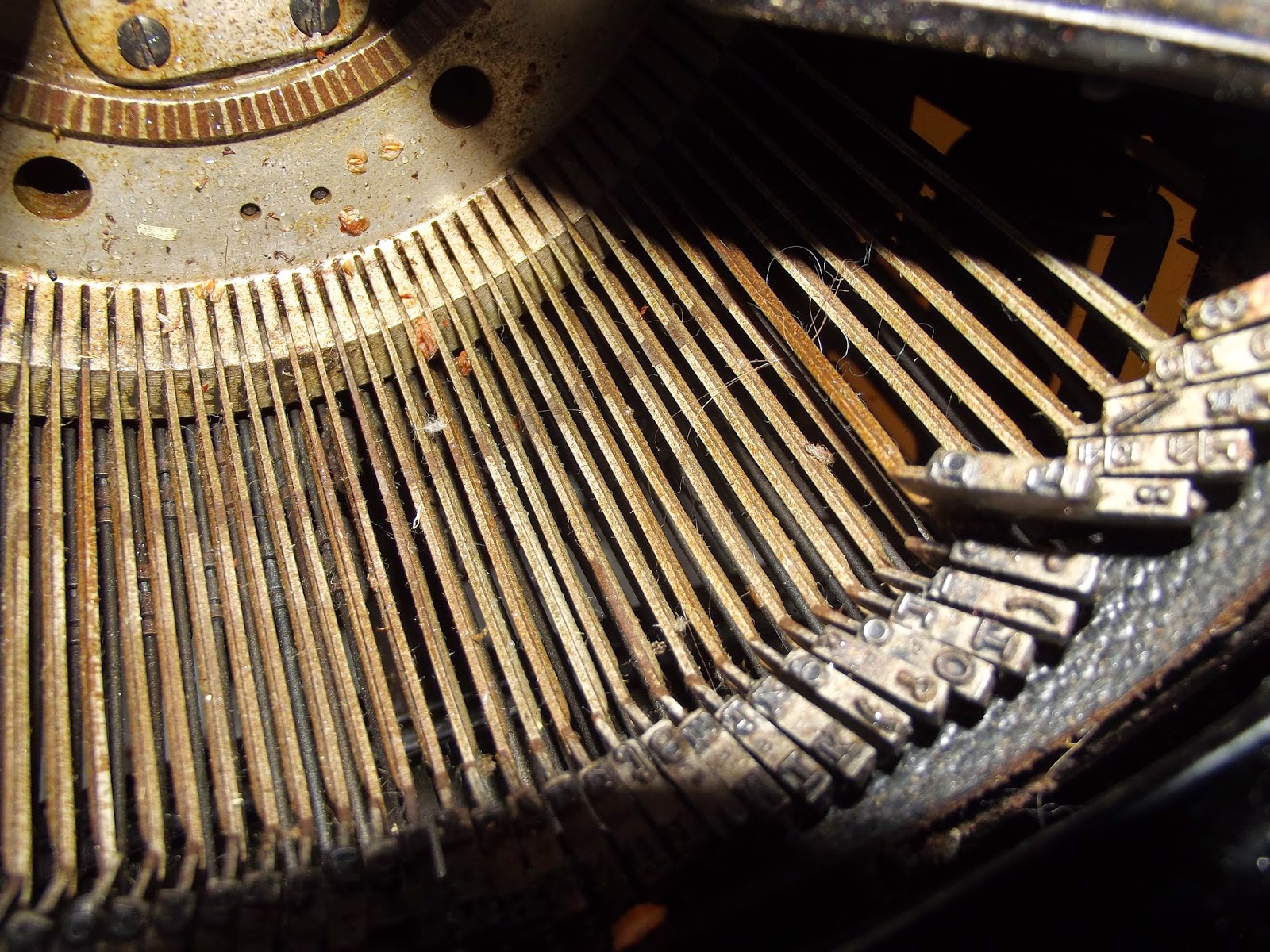 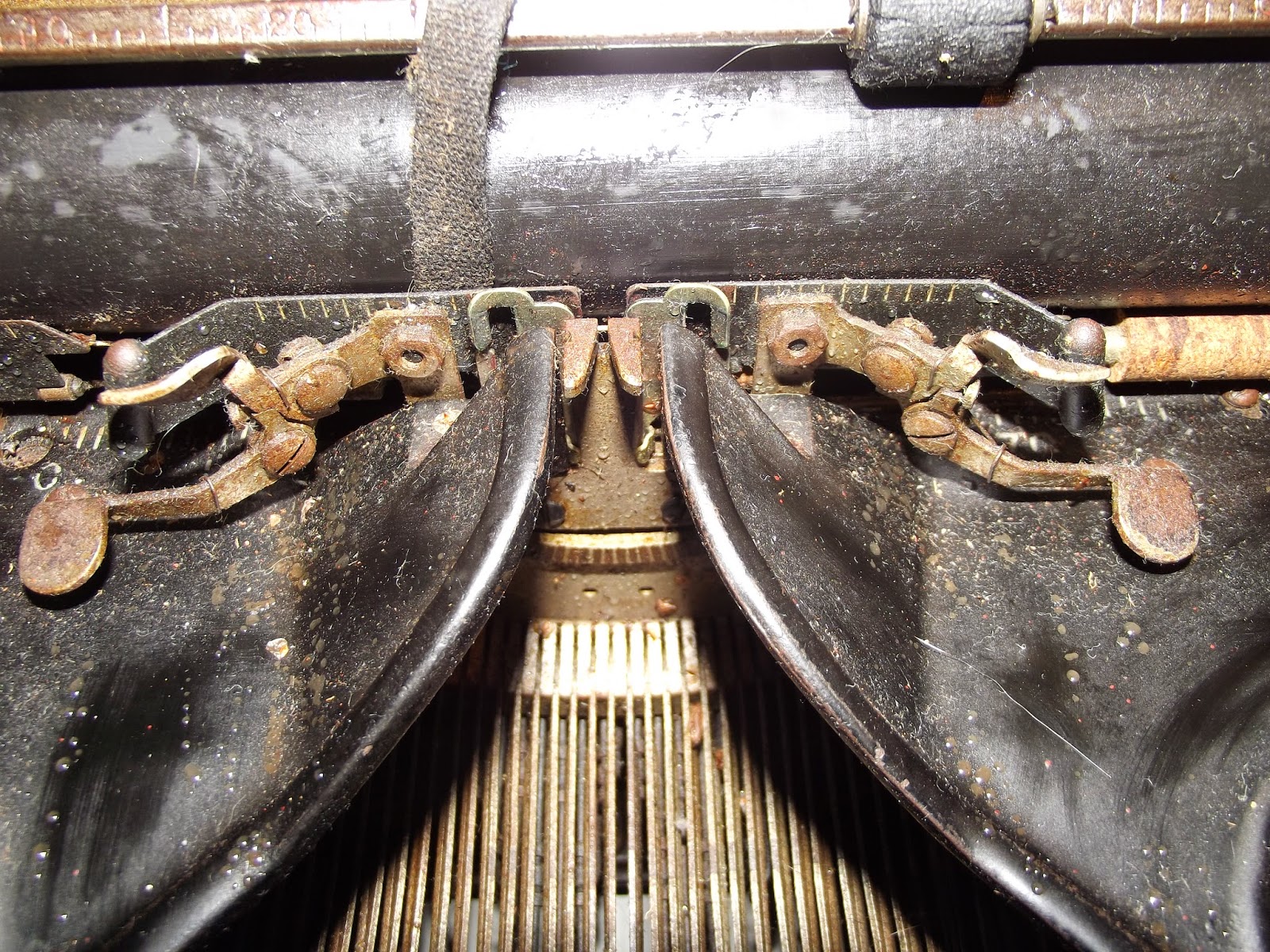 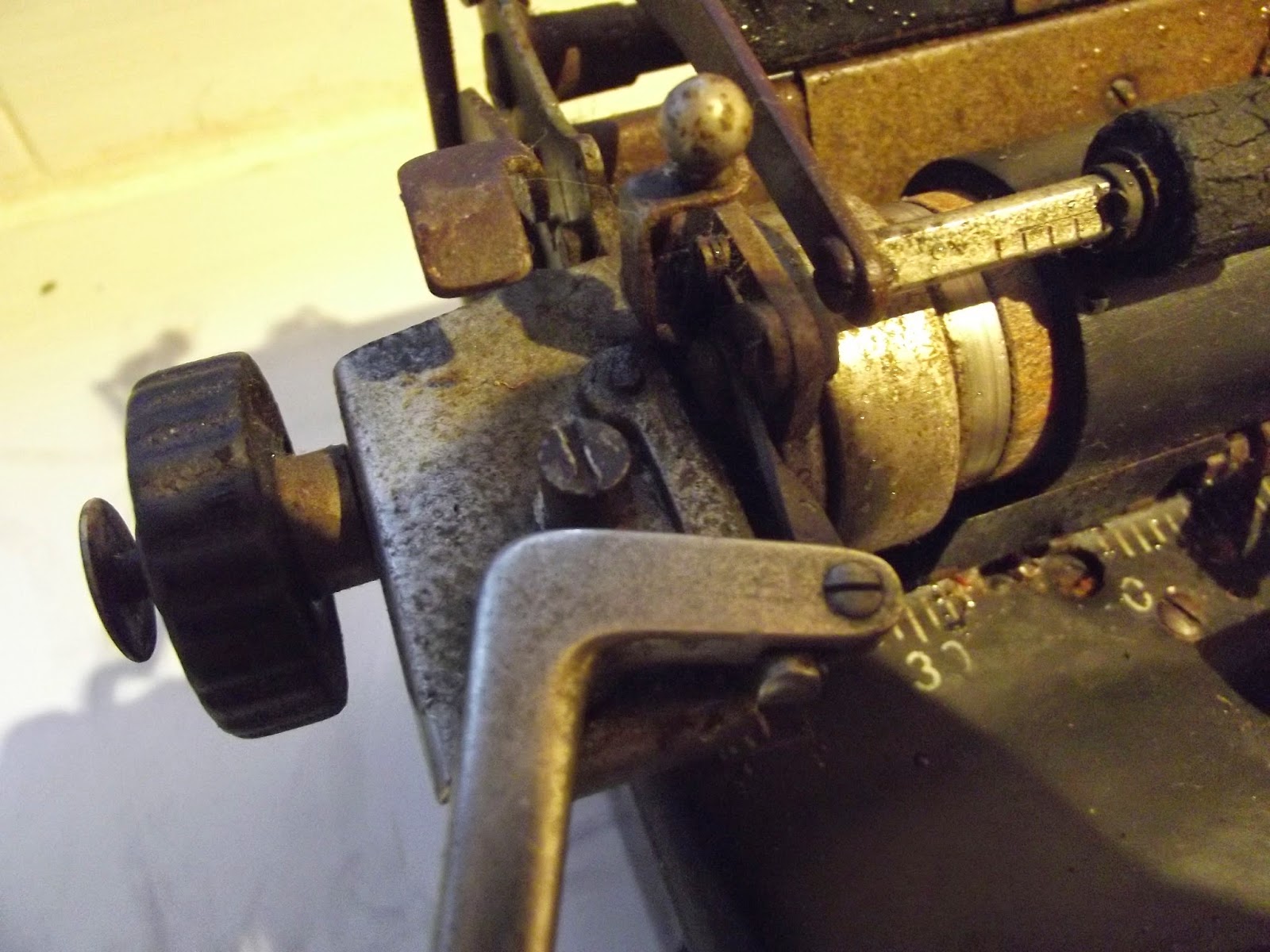 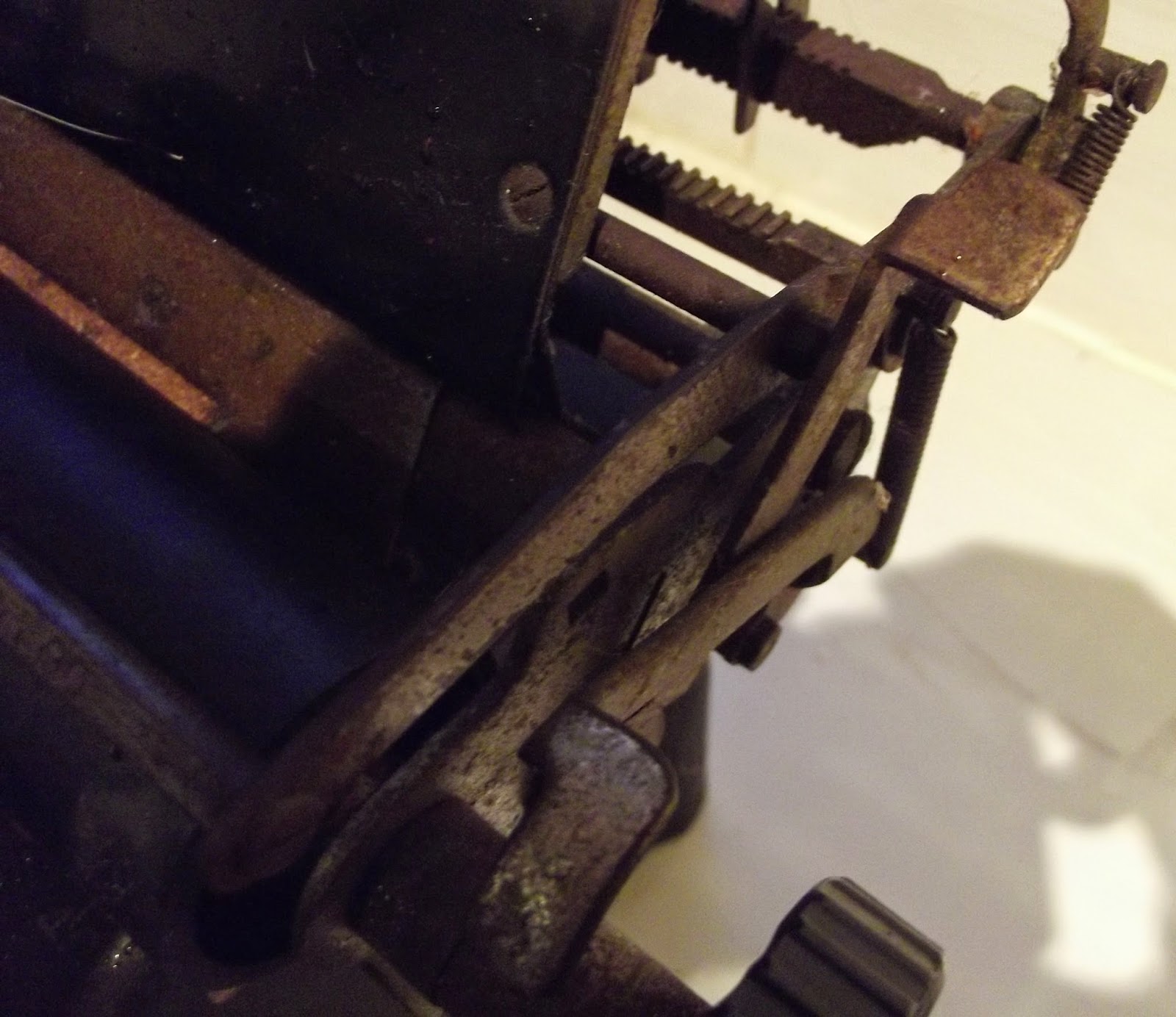 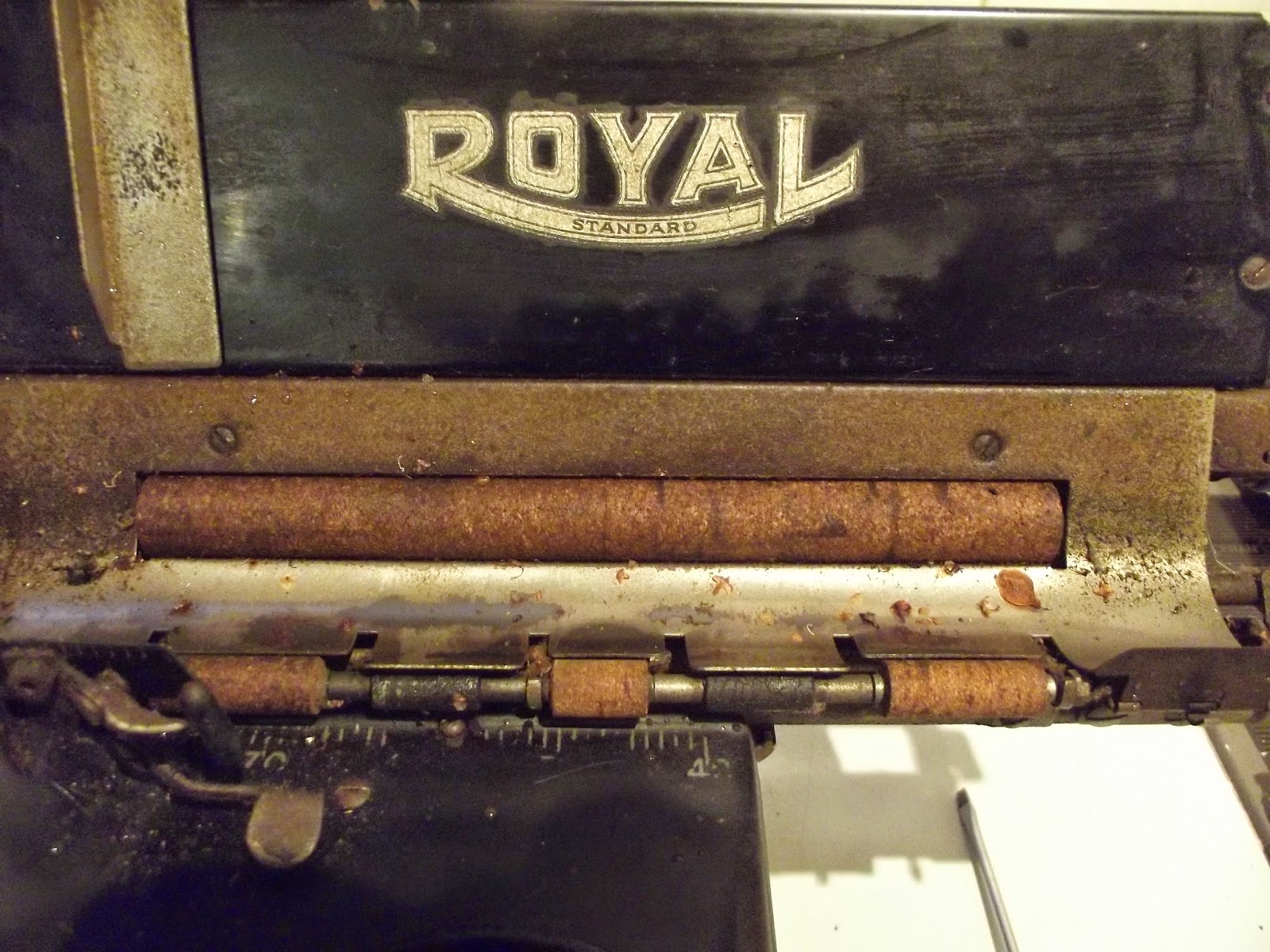 And how about this for super serious gunking? 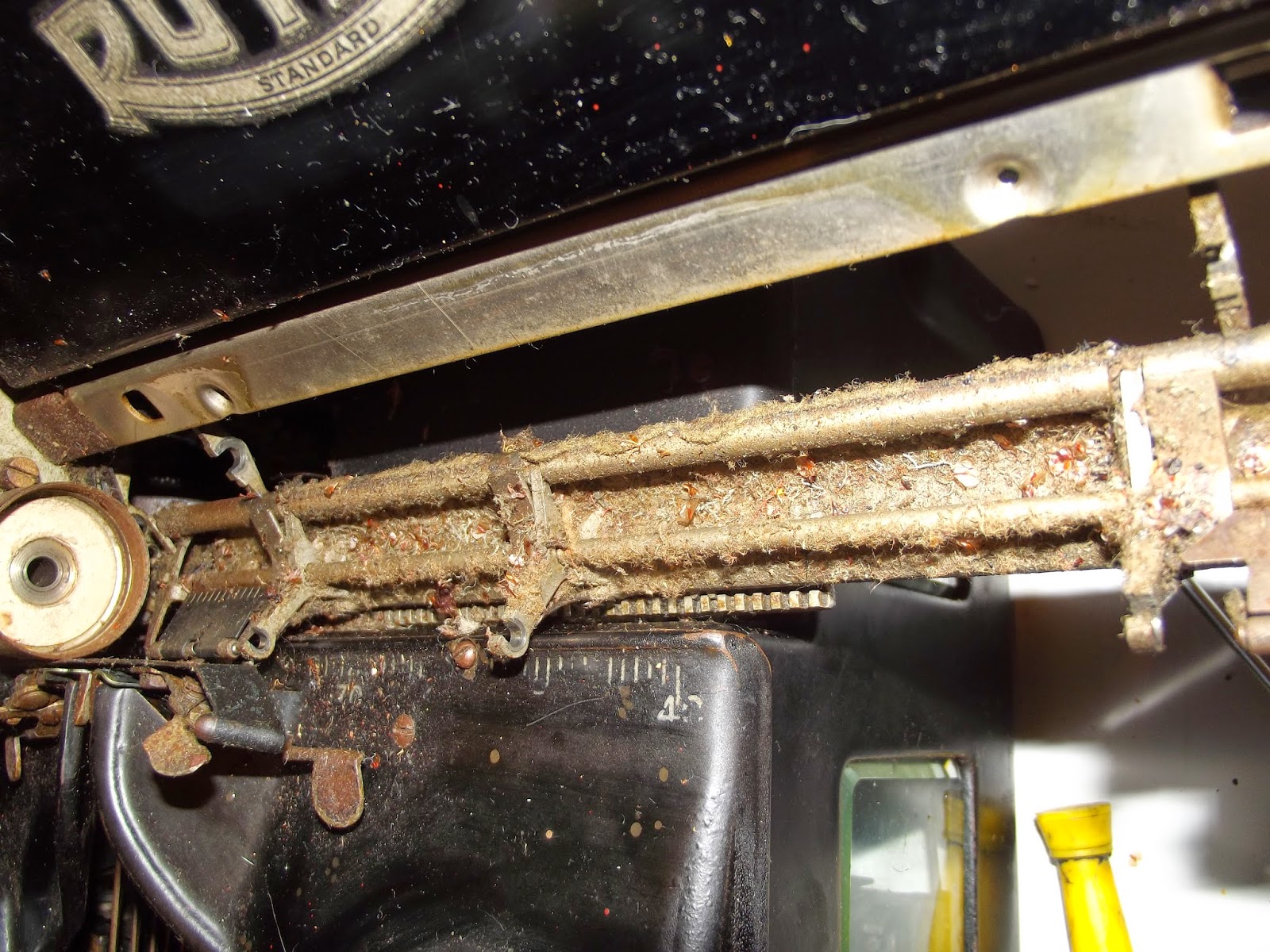 These cottonbuds show just the tip of the clean-up 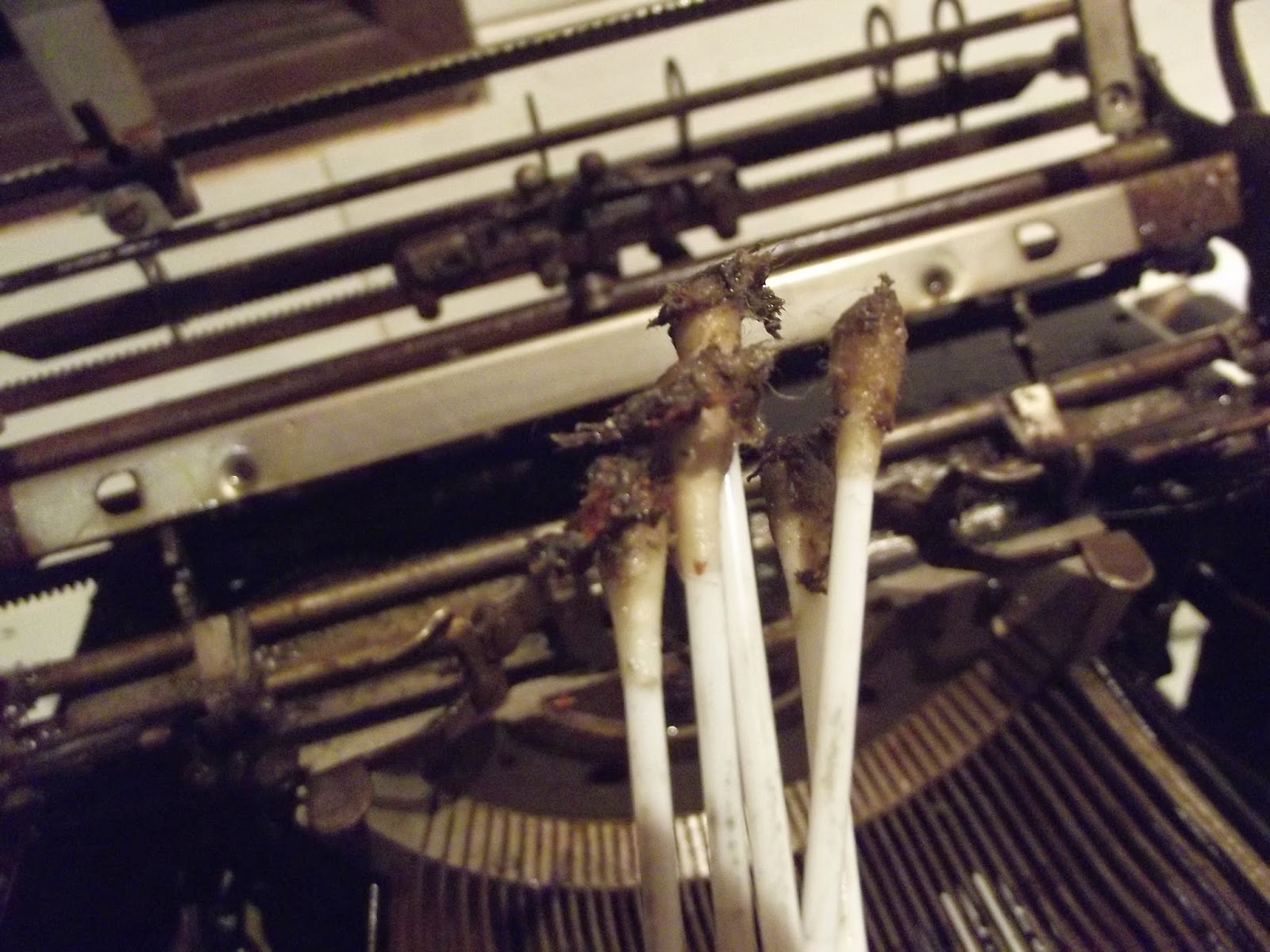 While I wait to give the machine a foam bath, I am trying out a few other things. I am soaking overnight in hot, soapy water and a wax cleaning solution the paper plate, front plate and two top plates. Already the signs are good that I can get them back to their shiny best. I have found in the past that ordinary dishwashing liquid can get quite a lot of the many layers of surface dirt off the black, shiny parts, so fingers crossed with this experiment. Meanwhile, I have wiped many of the corroded metal parts with a rust remover liquid, and that may also continue to work overnight.
Will this be a different looking typewriter by tomorrow evening? Here's hoping ...
The serial number, by the way, is X343755. The serial numbers for Royal 10s are a bit difficult to follow, but Alan Seaver's Machines of Loving Grace web pages have a 10 with the serial number X277685, and Alan dates his machine to 1916. The first 10 started in 1914 at 173000 and the first with the double bevelled glass windows was 212000. Alan's is the only one I have spotted with just the X prefix, but QX came in in 1921 at 600000. I would date my machine at either 1918 or perhaps very early 1919. Here is Alan's beauty: 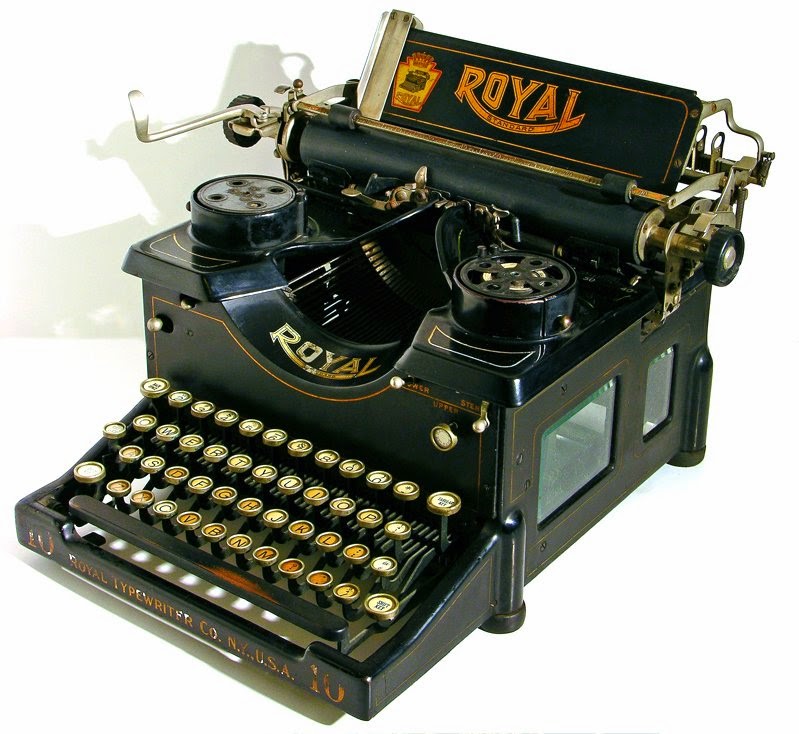 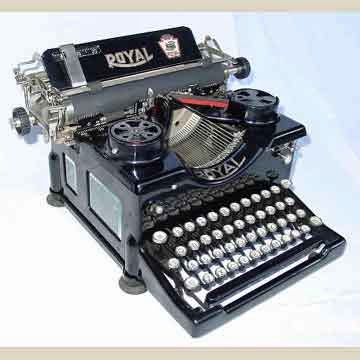 Good to have some references for examples in better condition on hand, partly to see if anything's missing but mostly to keep you going. I'd guess that wire wool or fine emery paper will get rid of most of the scabbing effect of rust where it has lifted any plating. Enjoying your scrubbing exploits hugely!

Hi Rob,
I have just to-day discovered a Royal 10 which I think is in even worse disrepair. I had virtually written it off until I read you blog. I am particularly interested in the rust removal potions that you use. Can you point me in that direction?. I have been using the Rob Bowker method of fine emery paper and I have even invested in a mini-grinder with a polishing wheel on it. I may get a chance to try it out now.
This old Royal has a Chartres
sticker on it which makes go back in time in the Aussie typewriter scene

Hi I recently purchased a Royal 10
Unfortunately the drawband is broken and the middle of it is missing...Do you happen to know the length of this strap or if anyone might have replacement parts or materials...Thanks...Sam Bacco, Nashville TN

Hi...I also purchase royal 10 ..I would like to know where do I find a repair book for this typewriter..my s number is x-650010..thanks Kevin jancura from Willoughby Ohio