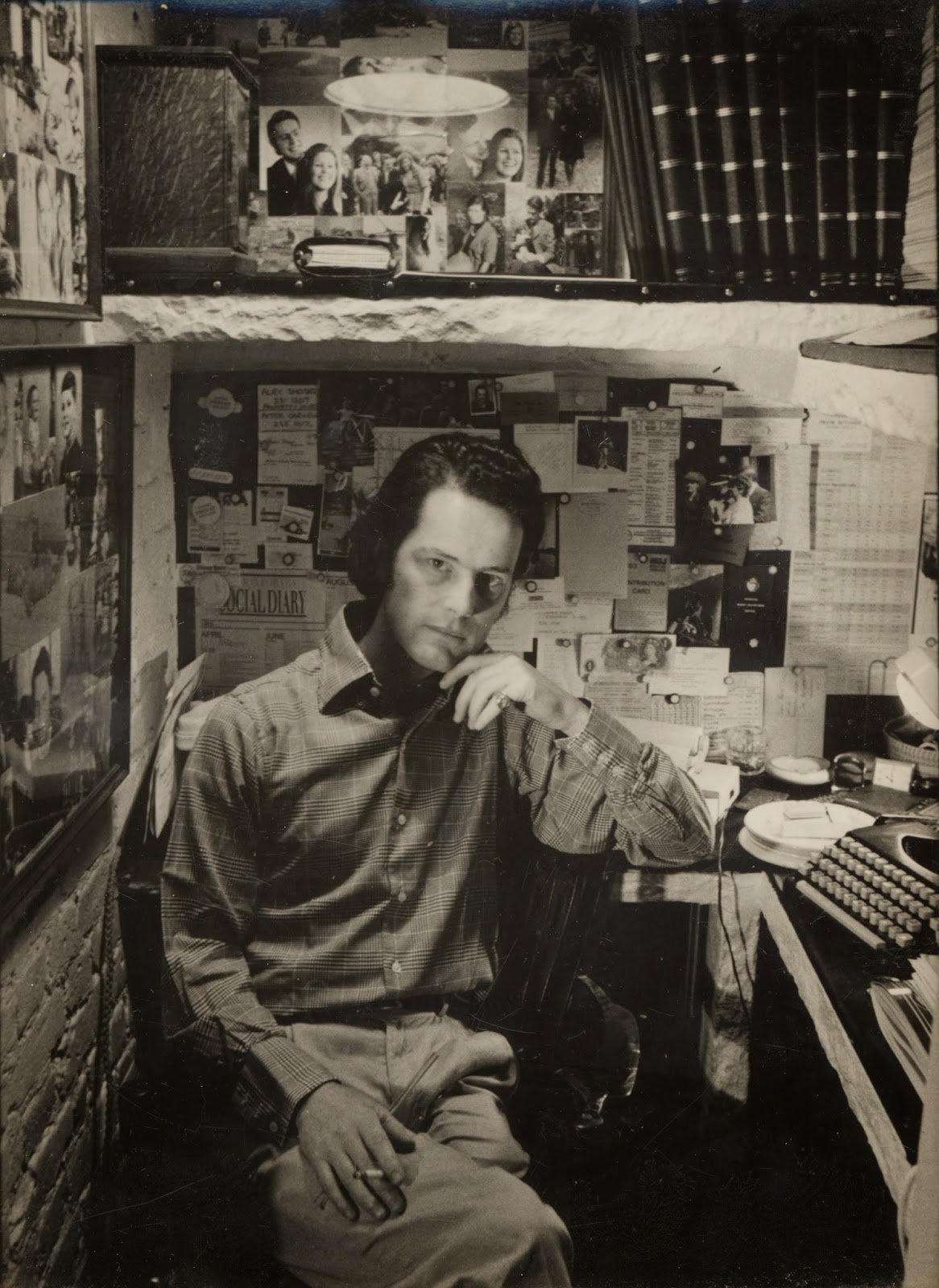 Christopher Long with his Olympia Splendid 66 in his home office in Kensington, London, in 1984.
For Mr Long's credentials to write about typewriters and newsrooms, see yesterday's blog post here. In the first paragraph of his recollections of typewriter-festooned newsroom days, below, he could well be writing about our Typospherian friend John Lavery ("McTaggart"), who did precisely as Mr Long describes, in servicing large pools of typewriters. Like most Irishmen, however, John has the gift of the gab, and no speech impediment whatsoever*:
As journalists, our machines used to get serviced about once a year. A man would come to the newsroom with a small leather case full of tools, brushes, oil cans, etc., and would examine each machine in turn. I noticed that these men usually had serious speech impediments and were probably handicapped in other ways too - so this was a job which may have suited them well since conversation was not really necessary. However, I was once solemnly and laboriously advised not to pour cups of coffee into my Imperial 66. We would replace the spools ourselves very regularly and I don’t ever remember once having a serious problem with any of our typewriters (Imperials, Royals, Hermes, etc., as identified by you, Mr Messenger!). But the service man would pull the whole thing to bits, lift out the roller, clean it, lubricate bits and pieces and brush dust out of each little crevice. 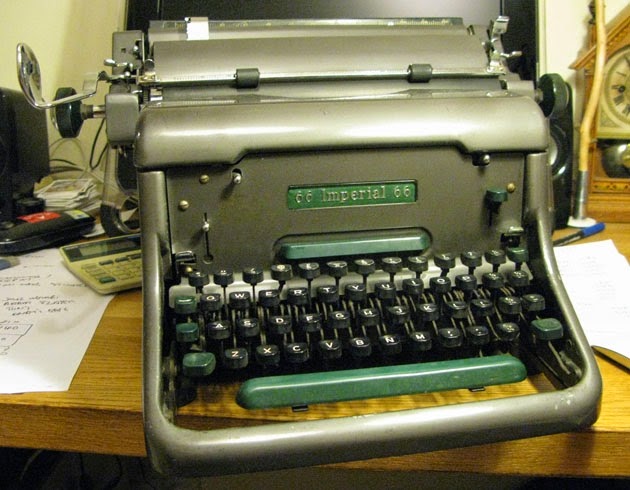 From Rob Bowker's Typewriter Heaven Collection
Every journalist had an intimate relationship with his own machine and knew exactly how to keep his particular beast functioning - often with the help of a straightened-out paper-clip. It would have caused a lot of offence if you had used anyone else’s machine without permission (and you probably wouldn’t have got permission had you asked). In Fleet Street, on a paper like the Evening Standard in the late 1970s-1980s, our ‘pieces' were typed on small three-part pads (or 'sets’) which needed no carbon paper between the sheets. The white top sheet and pink second sheet went to the ‘sub’ who, I think, forwarded the pink one to the picture desk if necessary. The green (?) copy was kept by the writer of the piece. These 'sets’ were about half the size of an A4 sheet and I found them infuriating since you could only get one or two paragraphs on each one. At the top of each page you’d type the tagline ‘Zebras / 1’, ‘Zebras / 2’, etc., and at the bottom of each you would type 'm/f’ to indicate that 'more follows’. At the end of the last page you’d write ‘ends’. If you were in a good mood you’d suggest a headline which the sub might or might not use and if you were feeling particularly keen you’d suggest something helpful for the picture desk. 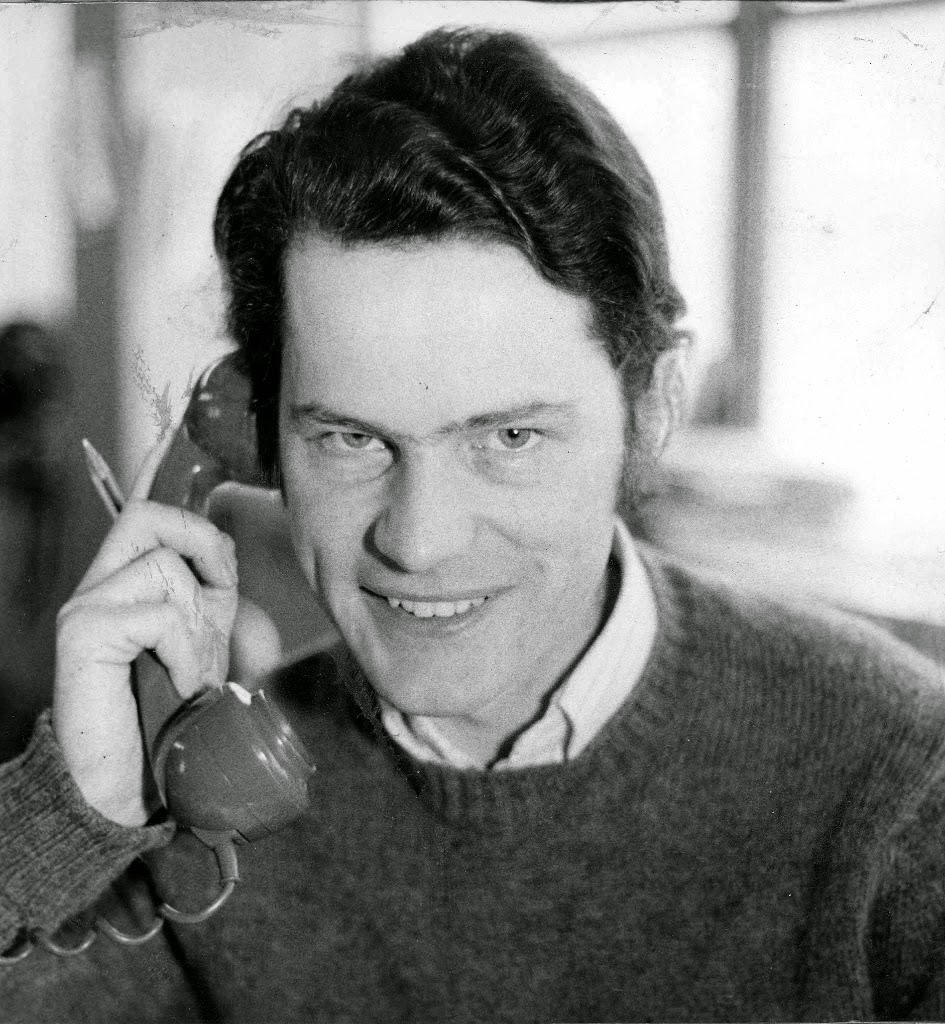 Christopher Long's byline portrait
At the London Newspaper Group we had the luxury of whole sheets of A4 (but really rubbish quality stuff) and you’d stick in two of them with a sheet of carbon paper between so that you’d have a file copy for yourself. We usually didn’t set the right-hand margin all at because the pinging of everyone's bloody bell every few seconds would have driven us all mad but we set plenty of space on the left-hand margin for the ‘subs’ to work in. For the same reason our typewriters were almost permanently set to double or triple spacing in order to give the ‘subs' space to 'mark it up’ between the lines. And since we never had bi-coloured ribbons, you’d simply turn the spools over and use the other half of the ribbon when necessary. I remember we used to keep large lumps of Blue-Tak in our desks which we rolled over the heads of the keys from time to time to keep them clean.
I don’t think we had any sort of emotional attachment to our typewriters. We were possessive of them in a purely territorial way and we treated them pretty roughly. They had to withstand endless pounding, lots of knocks, split drinks and even newsroom fights. But since our Imperial 66s in particular were built like tanks they survived any abuse quite happily and I never remember being let down by any machine even though they were usually 25 years old when I got hold of them and went on happily for another 10 years until the digital age took over. 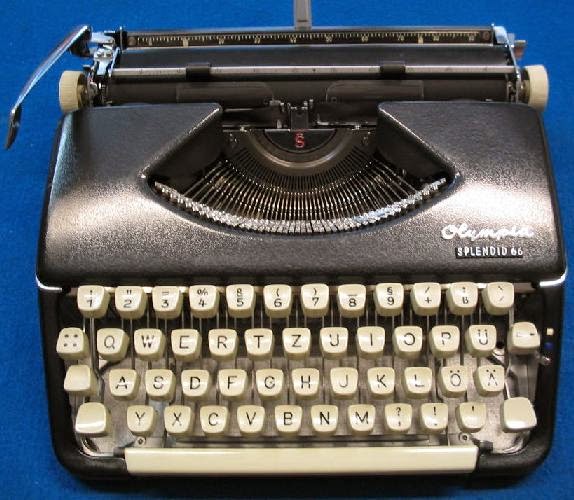 Nowadays, of course, I treasure my grandfather’s red 1931 Royal portable and I treasure my black Olympia Splendid 66 (see image top of post) which served me for freelance work throughout the 1980s (in the 1970s I had had a cream coloured version – with red keys, I think). And I even treasure the great lump of iron, taking up space on my desk as I write, which calls itself a Royal HH and which reminds me of inky days in Fleet Street when secretaries said they wouldn’t work with anything that wasn’t electric. So they got electric typewriters and their cast-offs were despatched to us in the newsroom - hence the HH with the special tab lever on the right-hand side… no bloody use to a journo!
Below is a piece of typewritten ‘copy’ for a diary piece for the Kensington News & Post (Christmas 1978) before the ‘subs’ had got to work on it.

Who pays the Piper?
*John Lavery aside, too many of the typewriter repairmen from this era, at least of the ones I know today, have had the misfortune to suffer strokes in the intervening years. Possibly as an accumulative result of journalists spilling coffee into their typewriters?

Posted by Robert Messenger at 09:12

Thanks for giving Mr Long an arena to share these recollections

Great guest post and a bonus typecast! Try as I might, I can't break the Imperial 66 but then, I never tries spilling coffee over it.