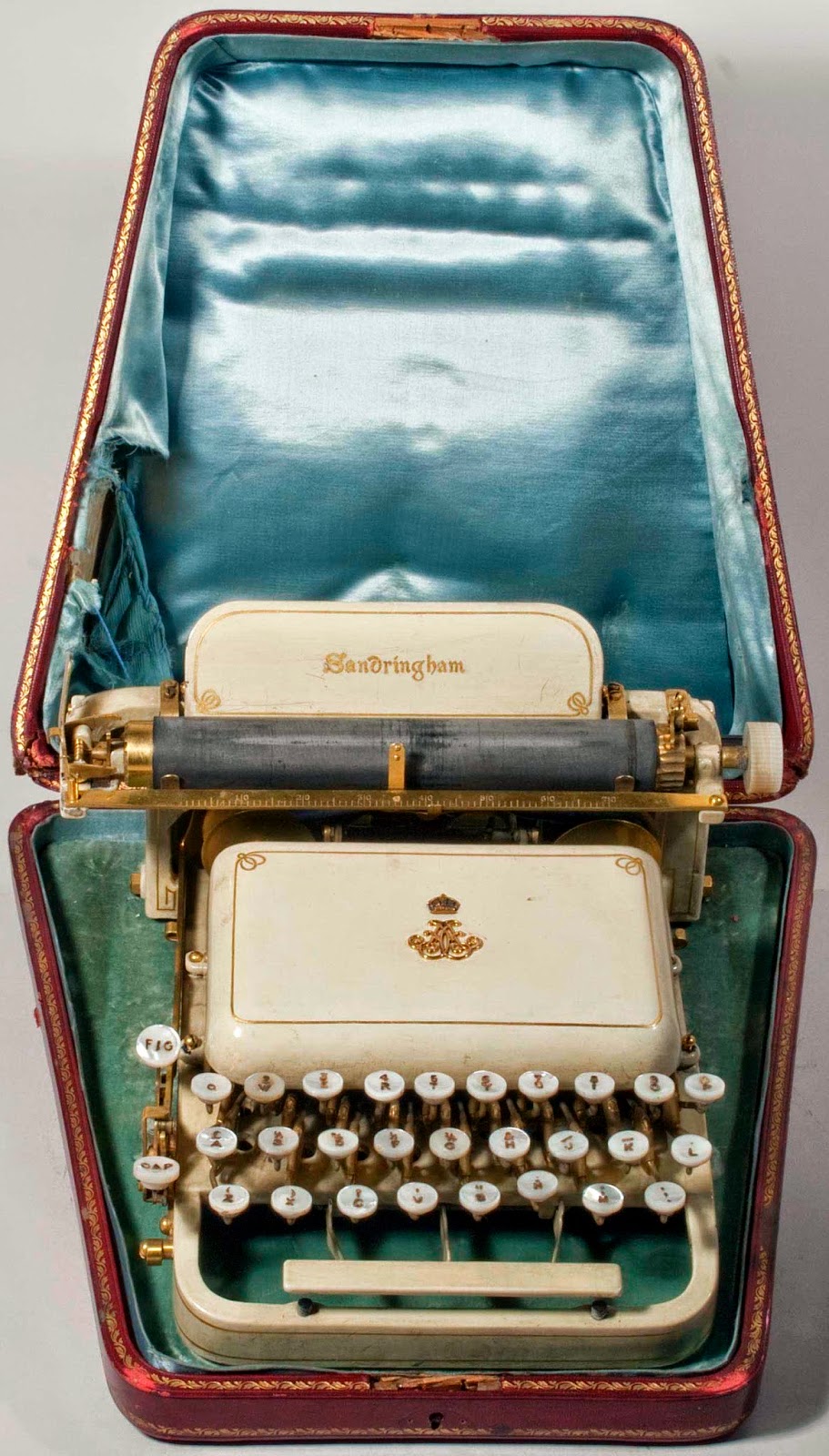 Feast your eyes on this magnificent beast, a typewriter truly Fit for a Queen. Is it the most beautiful typewriter ever, or just the most ornate?
The "Sandringham" is an American variant (serial number 9930) which is in the Dietz Collection at the Milwaukee Public Museum. When one looks at the listing for it online, however, there is absolutely no mention of its utterly alluring provenance. 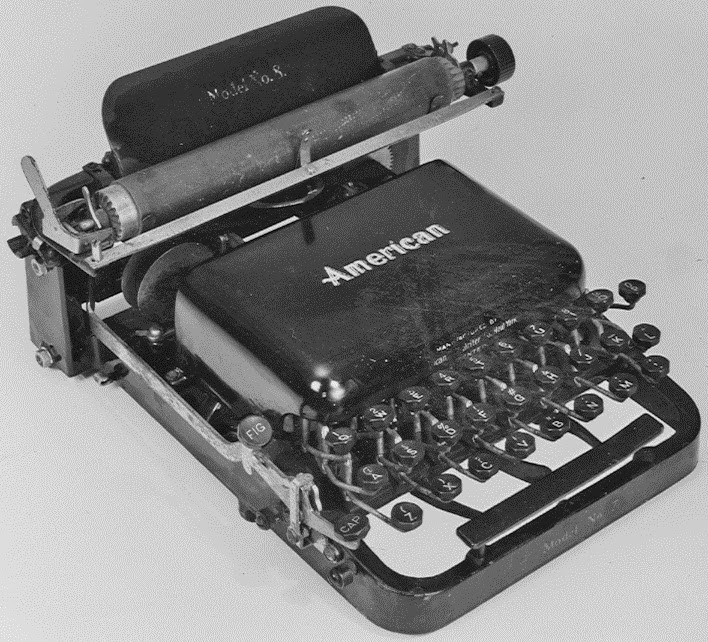 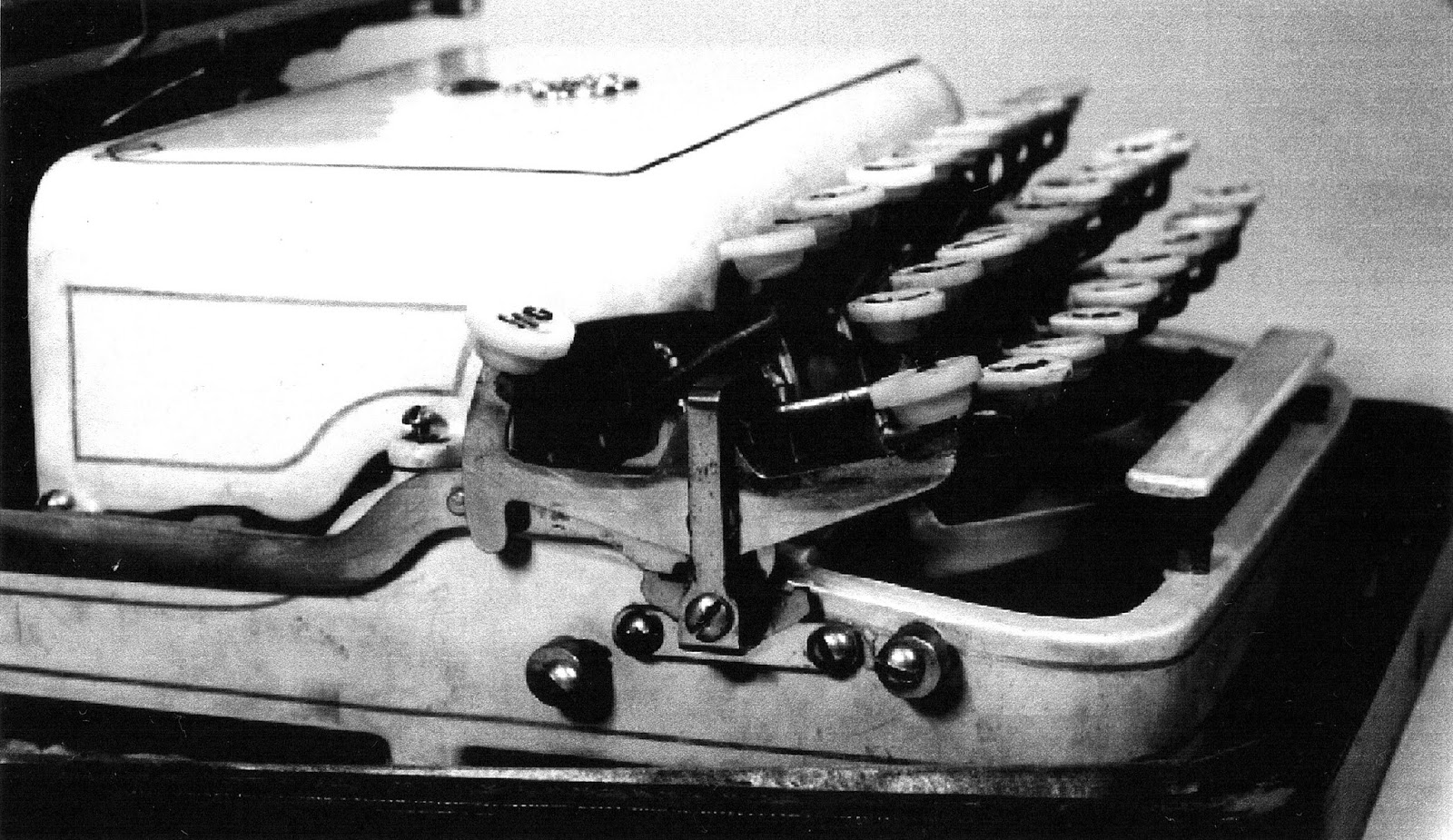 Side view of the Sandringham
Oddly, the Sandringham is not in George Herrl's 1965 Dietz Collection catalogue - which is, admittedly, highly unreliable (in the MPM's own understatement, "It is known to have pictorial and textual errors"). 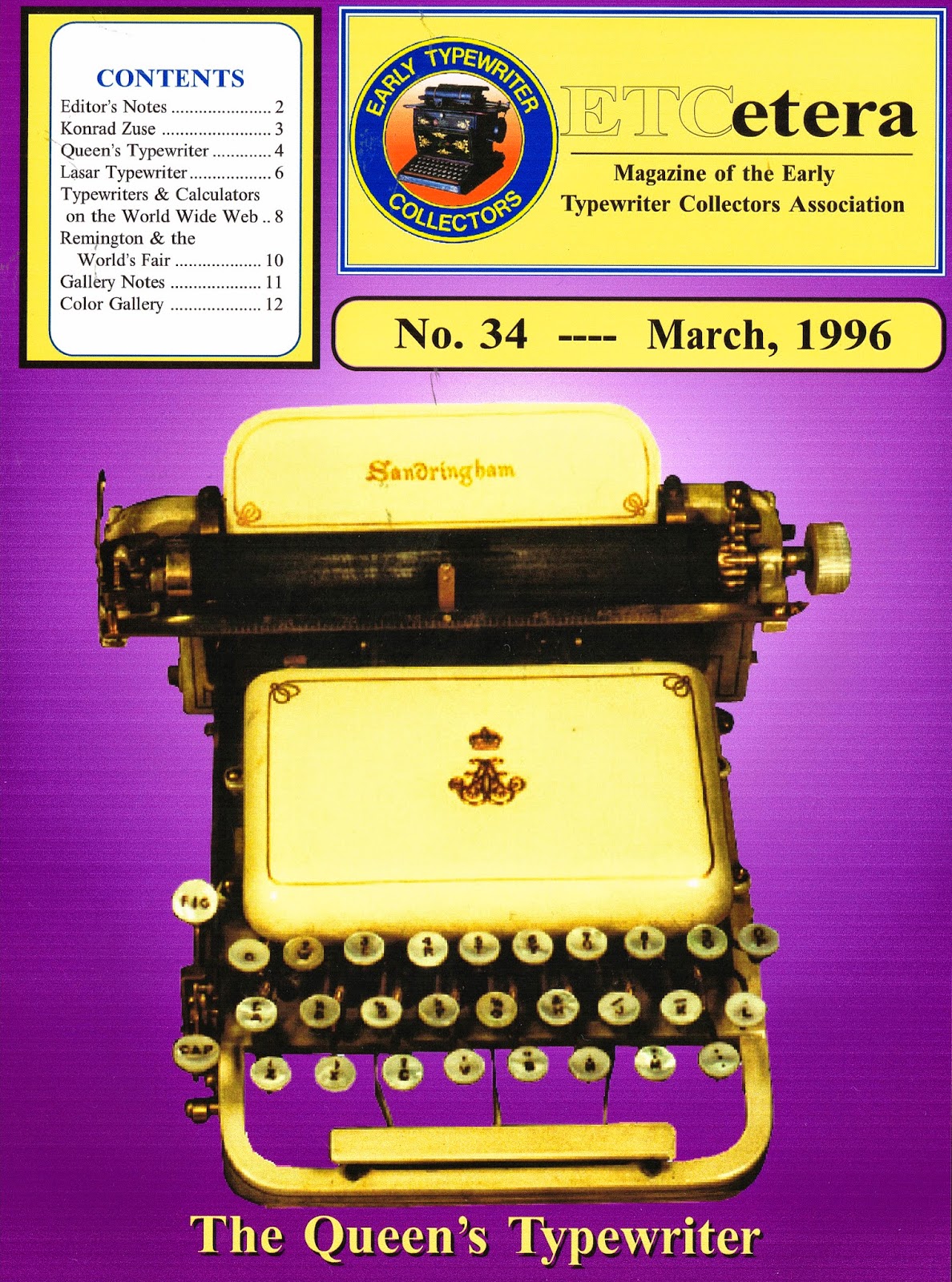 The Sandringham once belonged to Queen Alexandra, Queen of the United Kingdom and Empress of India. This was established by John D. Lundstrom - Curator Emeritus of History at the MPM - in the March 1996 edition of ETCetera (No 34, PDF here). 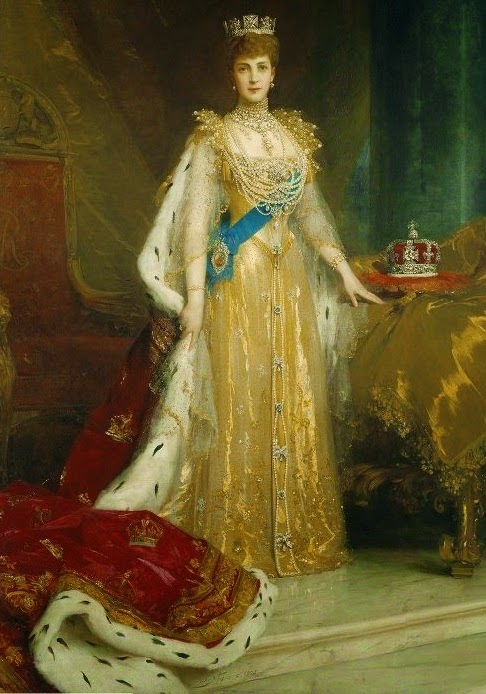 Queen Alexandra's 1905 portrait
What ETCetera didn't know at the time was that the Sandringham as presented to Alexandra of Denmark when she became queen (as the consort of Edward VII) upon the death of her mother-in-law, Queen Victoria, on January 22, 1901. The gift came from William James Richardson (1863-1949), owner of The (British) Type Writer Company, which had the franchise to sell American Typewriter Company machines in Britain. 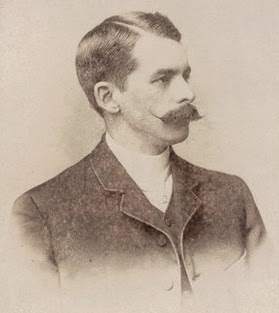 William James Richardson
Richardson is best known for holding the British franchise for the Bar-Lock and for ultimately converting it to a British-designed frontstroke typewriter. Richardson had in 1890 presented Queen Victoria with a Bar-Lock and had thus won Royal patronage for that Charles Spiro-designed machine - it became known in Britain as the Royal Bar-Lock. 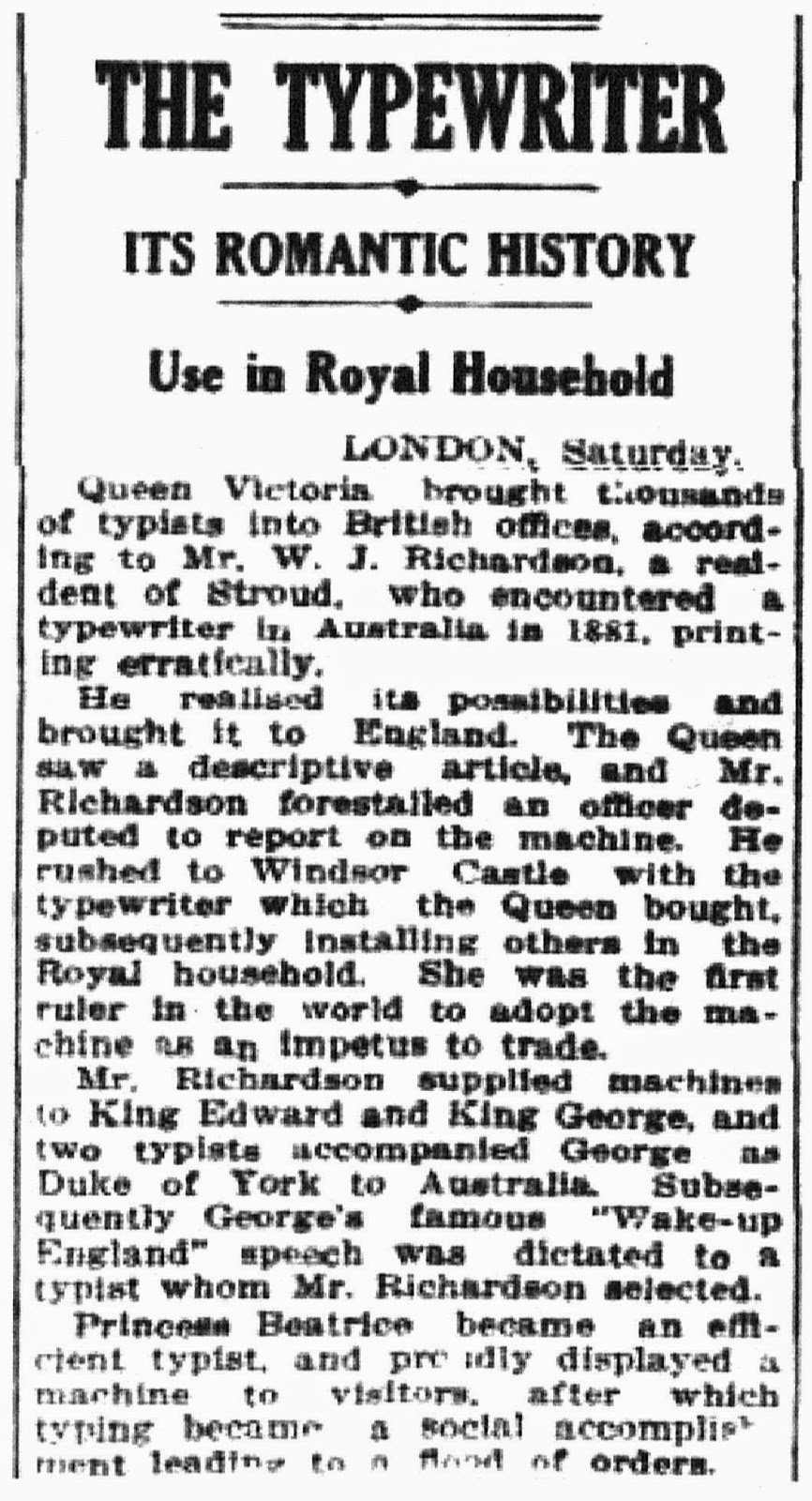 On a trip to Australia from England and South Africa in 1881, a then 18-year-old Richardson saw his first typewriter – a Remington 1 which had been shipped into Adelaide from London in 1876 by George Witherage Cotton. Richardson there and then determined that his future lay in typewriters. He returned to England and found the London agent for the Remington 1 (Emmett Densmore) had “never made much headway”. In 1885 Richardson went to the US, where he was introduced to Spiro, then working on the Columbia. Richardson secured the British rights, believing this machine had advantages in visible writing, “inking from the face of type”, differential spacing and the use of printers’ type. However, he came to see these as disadvantages, and formed the opinion that the public did not want low-priced typewriters, but machines that were “rapid and durable”. He said Spiro shared this view, thus invented the Bar-Lock. 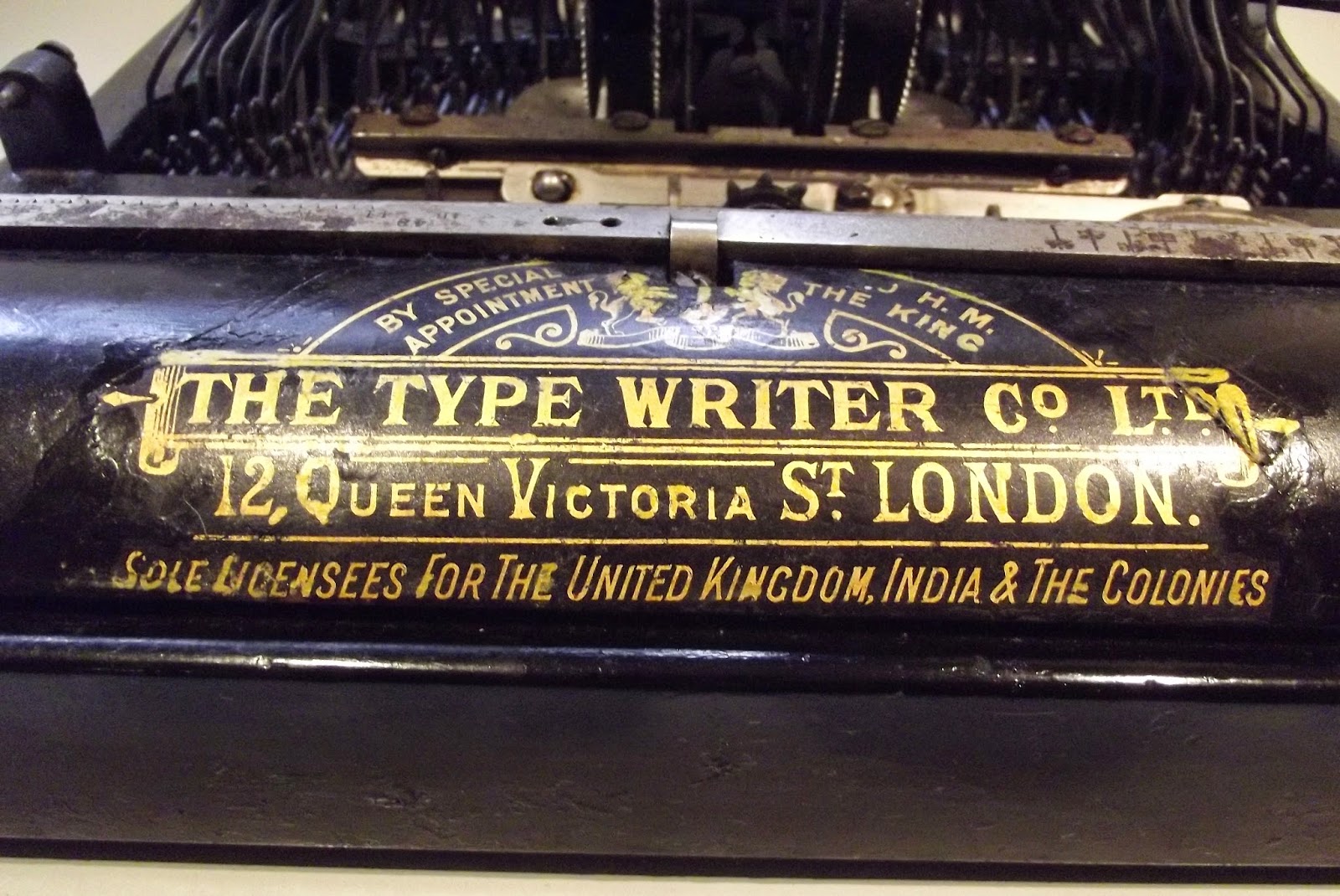 With the British rights to the Bar-Lock, from 1890 Richardson was officially designated by royal warrant to be “Her/His Majesty’s typewriter maker” to three successive British monarchs, Victoria, Edward VII and George V. Typewriter Topics reported, “all the typewriters in use in the various royal palaces, with two exceptions, being Bar-Locks”. Imperial later acquired the mantle under George VI.
Richardson was born in fashionable Highgate in London in June 1863. As a young man he was a bookseller in Portsea and a salesman for printing houses in Birmingham and Bristol.
Though commissioned and "designed and executed" by Richardson in England, the Sandringham presented to Queen Alexandra was actually made by the American Typewriter Company at the Williams factory in Derby, Connecticut.

The MPM describes the Sandringham as being gold-plated and painted white with gold pinstriping, having mother-of-pearl keys with raised gold characters, and as sitting in a red Morocco leather case. According to Pears Shilling Cyclopædia in 1898, Queen Victoria's Bar-Lock had ivory keys: 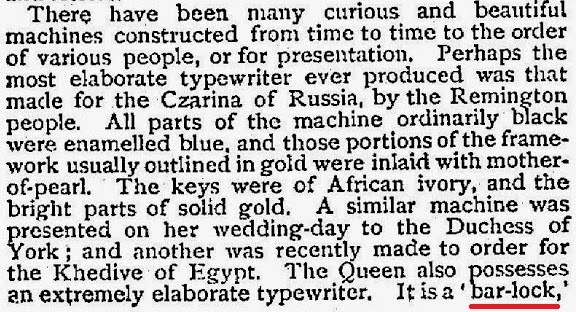 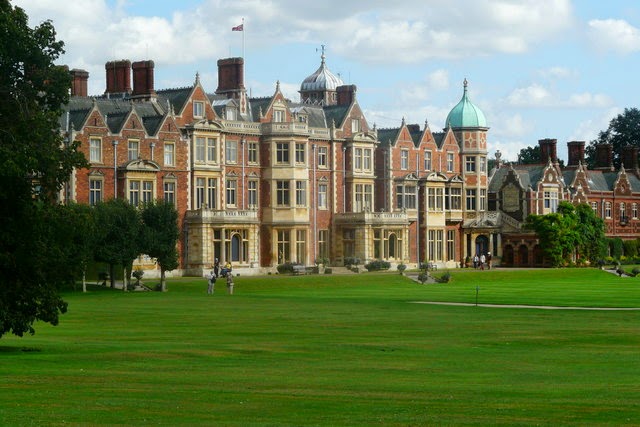 Sandringham House
Born Alexandra Caroline Marie Charlotte Louise Julia in the Yellow Castle, Copenhagen, on December 1, 1844,  the daughter of Prince Christian of Schleswig-Holstein-Sonderburg-Glücksburg and Princess Louise of Hesse-Kassel, Queen Alexandra was chosen at the age of 16 to be the future wife of Albert Edward, Prince of Wales, the heir apparent of Queen Victoria. They married 18 months later, in 1863, the same year her father became king of Denmark as Christian IX and her brother was appointed to the vacant Greek throne as George I. She was Princess of Wales from 1863 to 1901, the longest anyone has ever held that title.
From Edward's death in 1910 until her own in 1925 she was the queen mother, being a dowager queen and the mother of the reigning monarch, George V. She is the present Queen's great-grandmother. She greatly distrusted her nephew, German Emperor Wilhelm II, and supported her son during World War I.
On the top of Queen Alexandra's American, as well as on its red Morocco leather case, are her royal monogram (see it more clearly below): 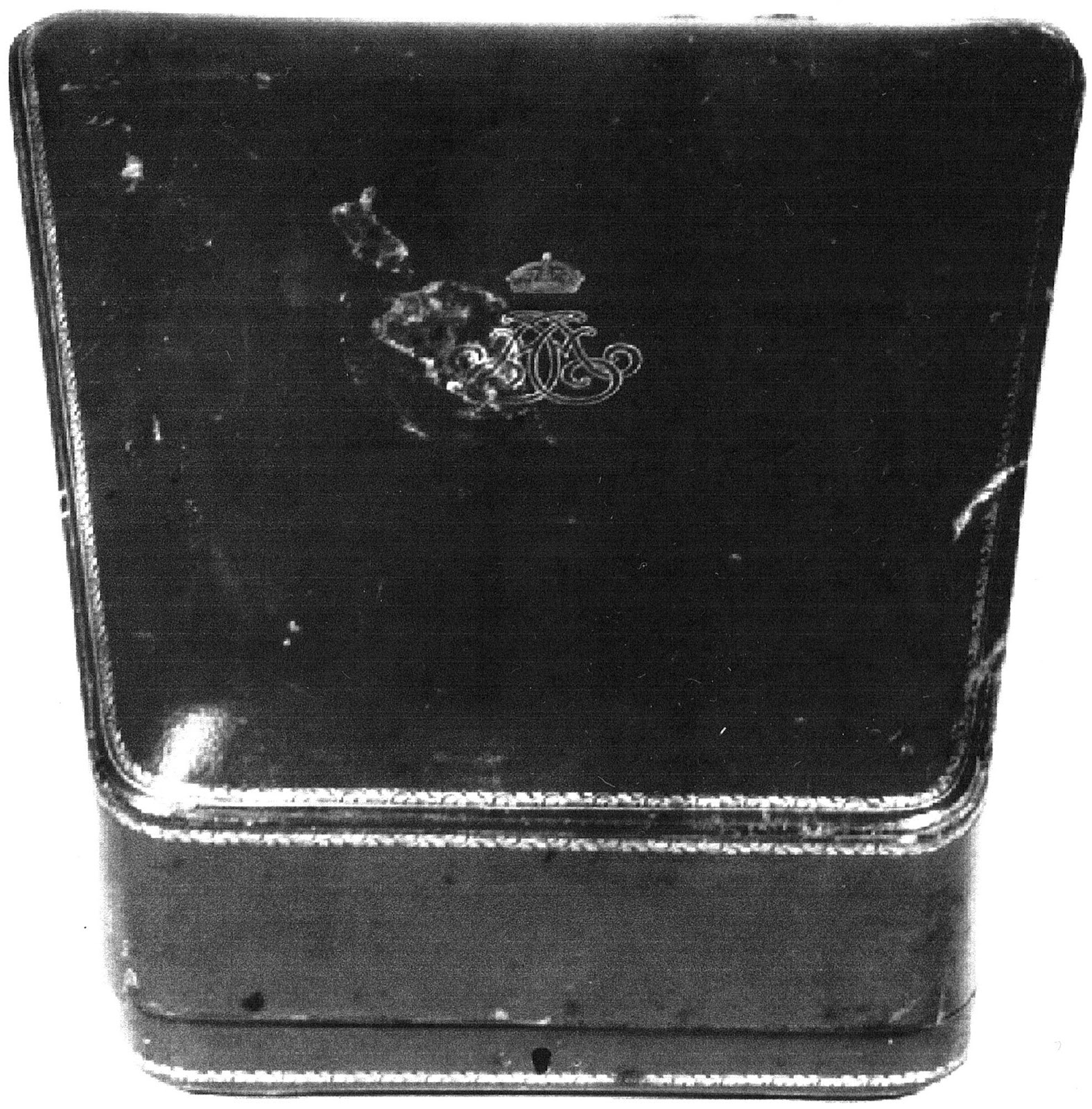 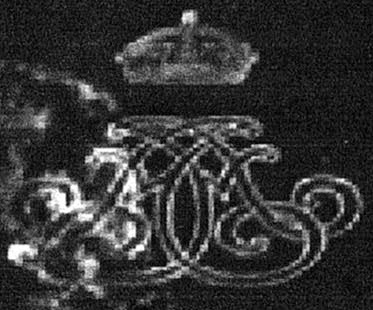 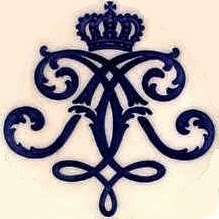 Queen Alexandra's successor as Queen of the United Kingdom and Empress of India, Mary of Teck, had been given an elaborately decorated Remington typewriter upon her marriage to the future George V, in 1893. It was painted in a blue enamel and had mother-of-pearl inlay, African ivory keytops and solid gold key characters. 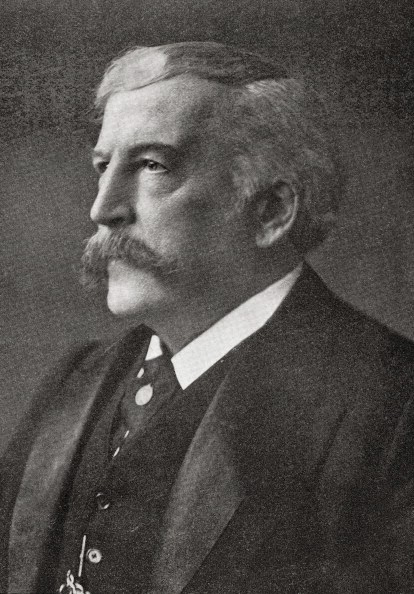 How did he get his hands on it? Former Governor-General of Canada
John George Edward Henry Douglas Sutherland Campbell, the 9th Duke of Argyll, better known as the Marquess of  Lorne (or just Lord Lorne).
Now, as to the Sandringham's provenance after it was given to Alexandra, this remains most obscure. Lundstrom wrote that it had been acquired by the MPM from one Theodore Hart, and that it had been received by Hart's father, Perry Hart, from the Duke of Argyll, Queen's Alexandra's brother-in-law through her husband's sister, Princess Louise. As absolutely no trace can be found anywhere of a father and son called Theodore and Perry Hart, I must assume these names have been given incorrectly. 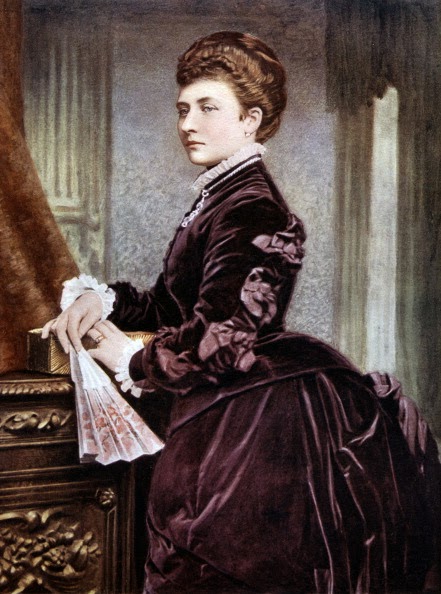 Princess Louise
Lundstrom presumed the Sandringham had passed from Alexandra to Louise. But the historian also quoted the Typewriter and Phonographic World as saying that Edward "possessed" an "exceedingly elaborate" engraved and gold-plated typewriter with ivory keys. (Lundstrom was wrong about Edward introducing typewriters to the royal household.) Whatever the case, how the Sandringham got into the hands of the mysterious Harts will probably remain anyone's guess. 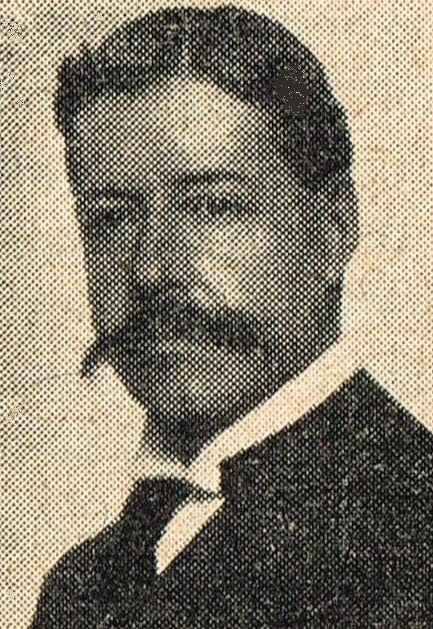 Lee Spear Burridge
The American (of which the Sandringham is but one of many variants) was designed in 1895 by Lee Spear Burridge (most famously the designer of the Sun and Underwood 3 portable) and Newman Russell Marshman for American Typewriter Company boss Halbert Edwin Payne (born Pittsfield, Pennsylvania, September 21, 1865; died Washington DC, July 30, 1938). The patent number in the black-and-white ETCetera image above is for an 1899 British patent, taken out by Payne for the ATC, as he did in the US, for an improvement on the original Burridge-Marshman design. 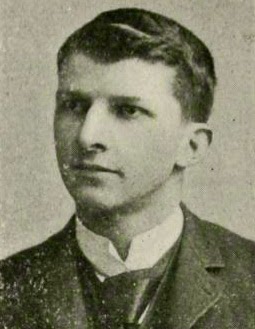 Halbert Edwin Payne
After 11 years of production, the Derby operation collapsed in 1910, with the ATC owing Williams almost $99,000. The ATC moved to Bridgeport, but that venture also went belly-up, in 1915. 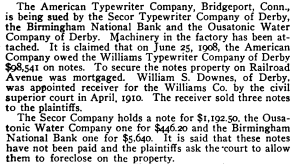 Payne went on to design and make aircraft for the US Army Corps, rising to the rank of captain. Payne graduated from Ohio State University in Mechanical Engineering in 1887 after having received a preparatory education at Washington University, St Louis. After Ohio, he spent 28 years perfecting and patenting typewriters. He first worked with Alexander Davidson on the New Yost. 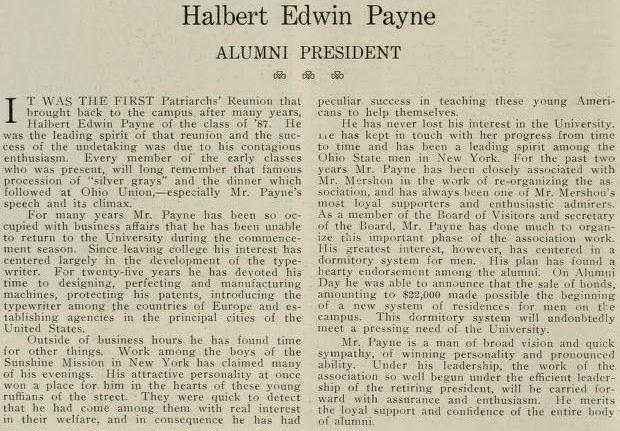 Apart from this one-off Sandringham, other variants of the the American were the Congress, Eagle, Elgin, Fleet, Mercantile, Pullman and Surety.  In England it was known as the Armstrong, in France the Herald and in Germany the Europa and Favorit. Below is the Surety Model A in Herman Price's collection: 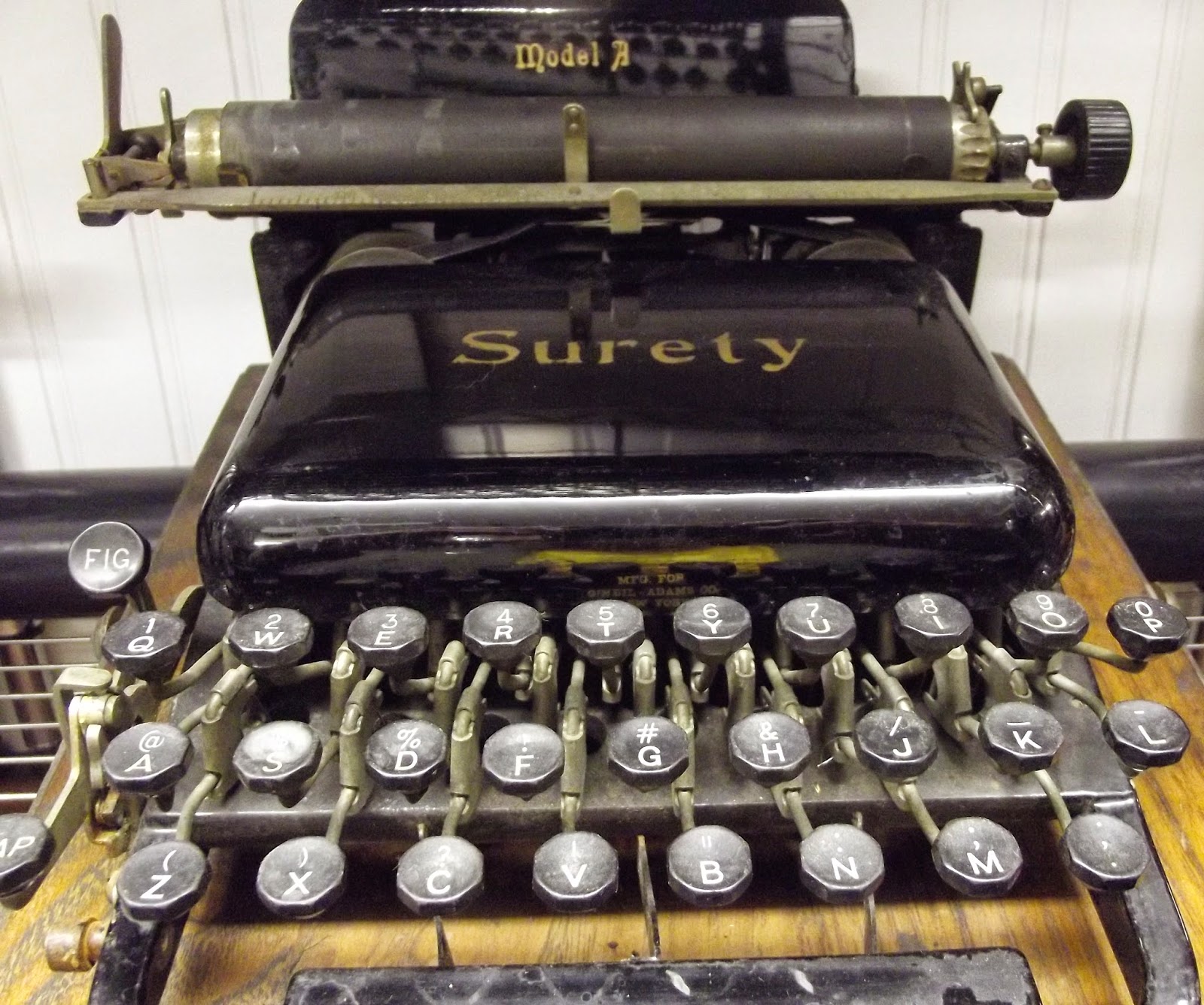 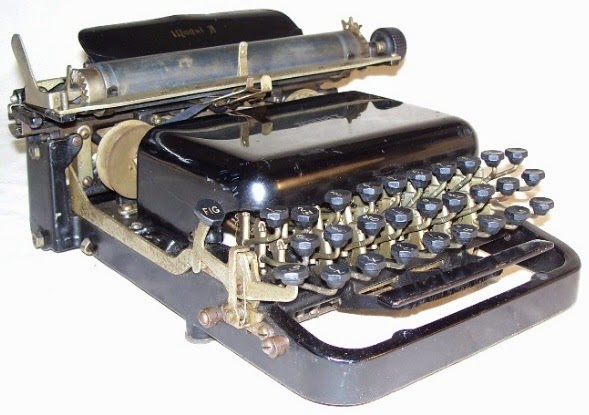 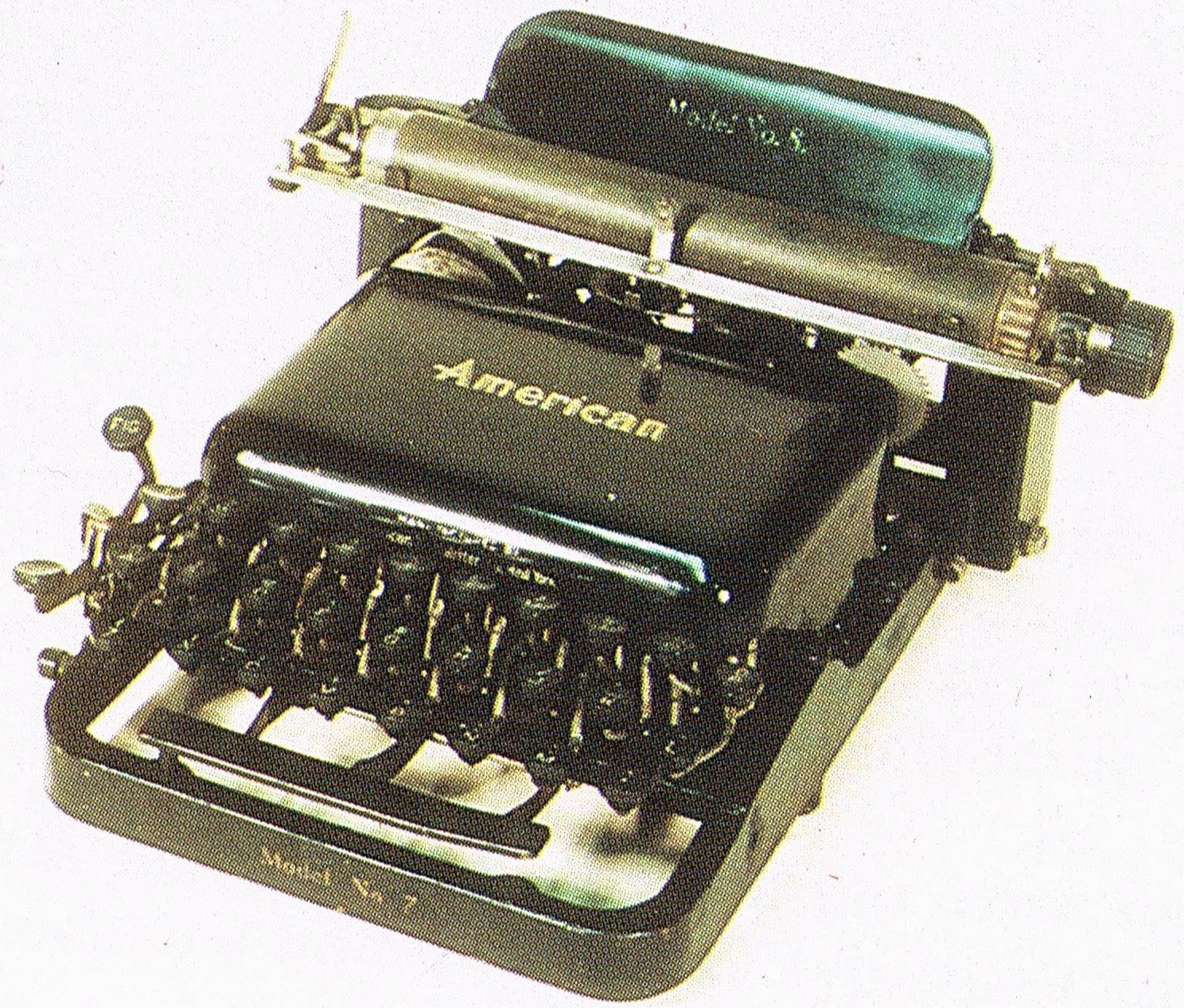 A Model 7 with a Model 8 paper plate. The American came in many, many guises. 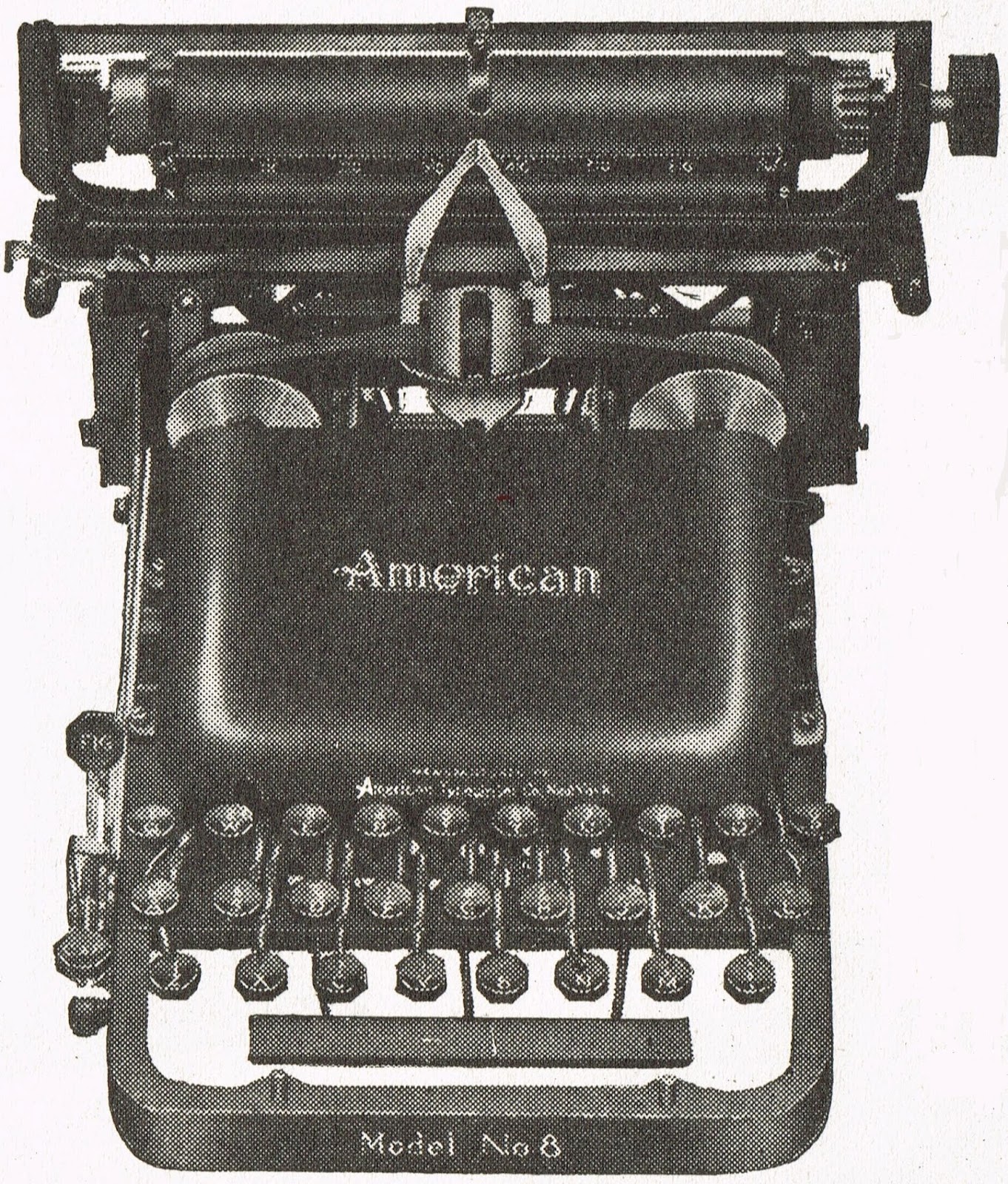 The Model No 8 was made in Bridgeport, Connecticut, and incorporated a new ribbon guide and pointer, patented in 1911 by Payne and Silas Guthree Wray (1867-1936). 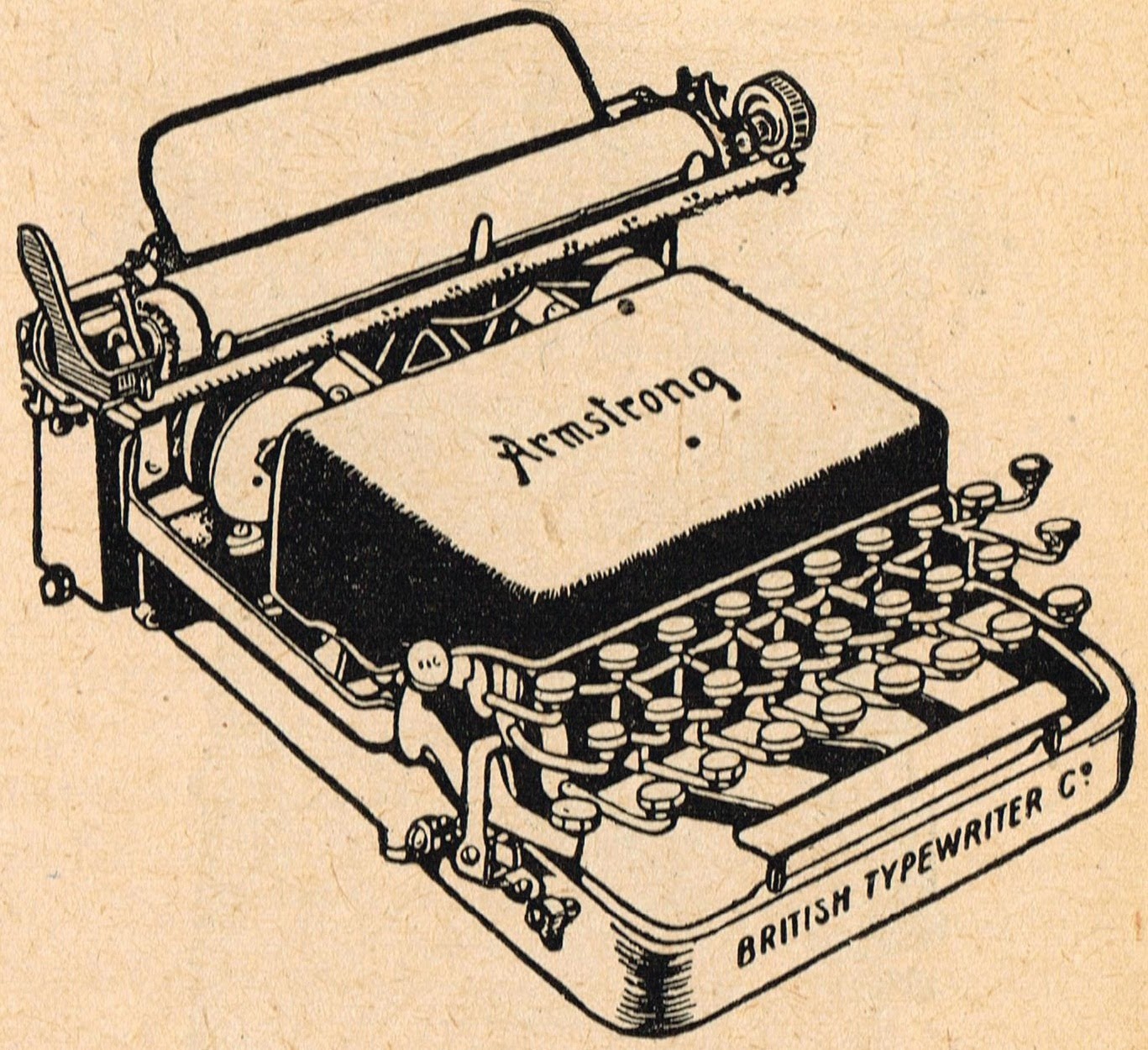 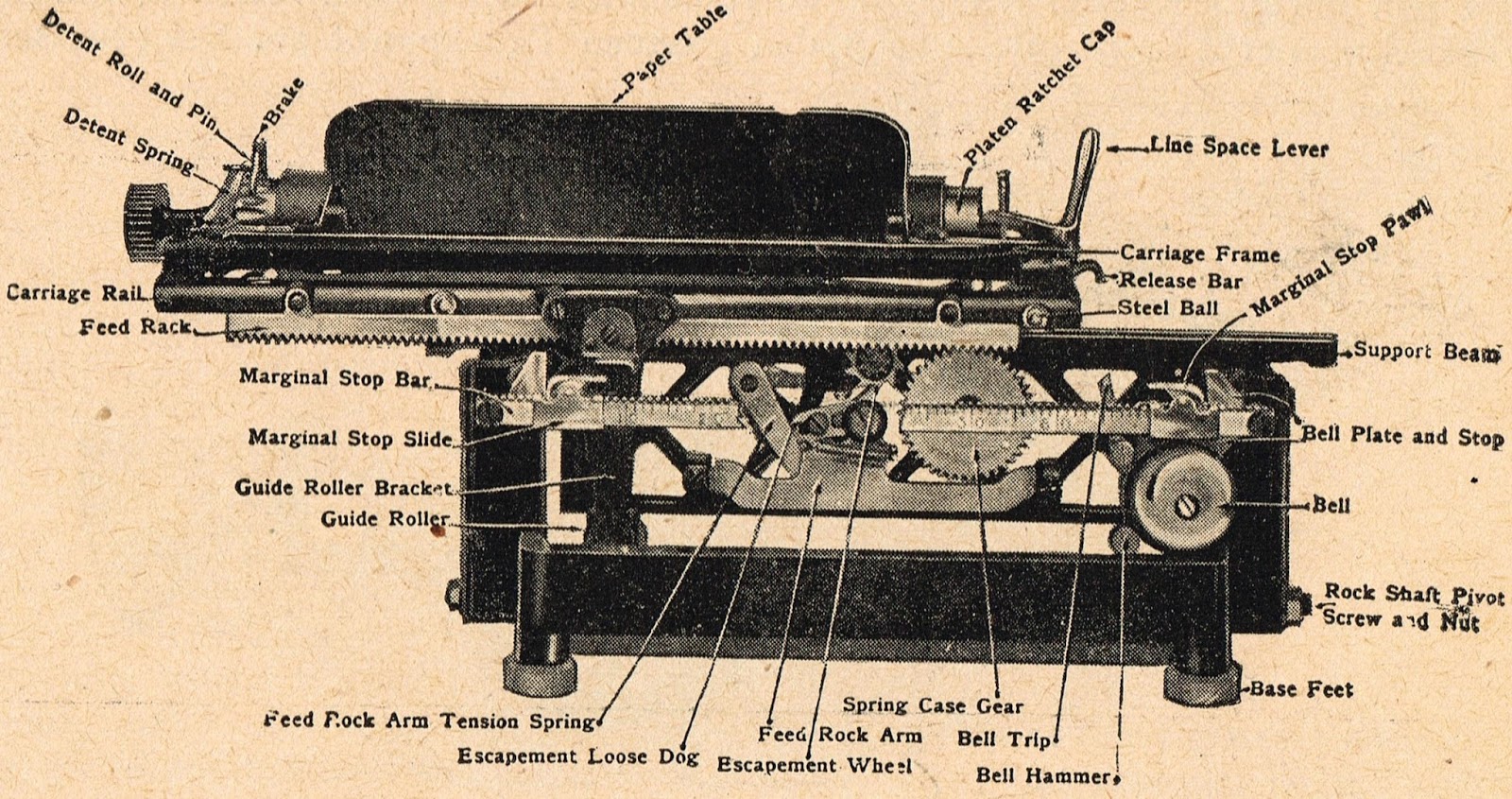 Posted by Robert Messenger at 16:53

Are those.... mother of pearl keys? Impressive. I even considered doing that when I was doing up the Chrome Royal. I had even sourced the inlays!

Interesting typewriter though. Thanks for sharing.

By coincidence, it was only this morning that I discovered the online photos of the Dietz collection. There are some fascinating machines there (check out the Diamond).

Wow, and thanks for the education. Being american, I'm fascinated by, but get a bit confused with the "Royalty" world. It certainly is spectacular! I love the fact that this and so many other wonderful machines are in Milwaukee, just 3 1/2 hours from me. A trip there this summer is definitely in order.
So, what's everyone doing this year for Typewriter Day? I'll be putting on a small exhibit at my public library - highlighting small portables like the SC Skyriter, and regionally produced typewriters like the Oliver, Emerson, Woodstock, and R C Allen's.
Just picked up a 1963 R C Allen VisOmatic B with a
26 1/4" platen, and a 32 1/4" carriage, - just a monster!