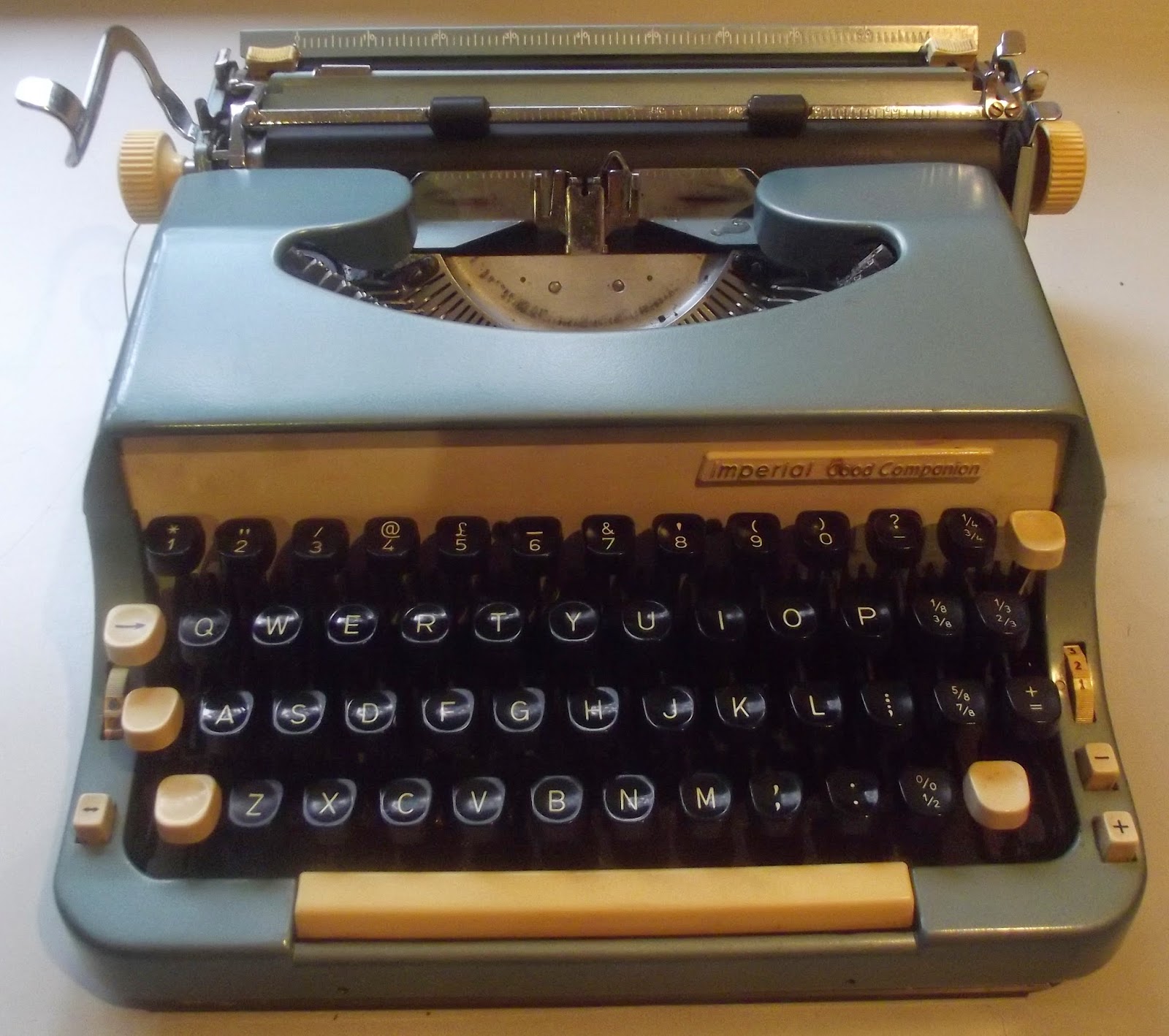 When you have two identical manual portable typewriters with absolutely identical problems, you have to suspect a design fault.
These two Imperial Good Companion Model 7s arrived with the "booty" of 25 typewriters I received some weeks ago. (The Model 7, by the way, is no more than the segment-shifted version of the Model 6.)
Judging by the state of the cases, and a cursory look inside, they both appeared to be in pretty good condition.
However, on a later, closer inspection, I saw that both had tell-tale signs - both drawbands were sticking out the back of the machines and the carriages were jammed tight.
I took them both out of storage this morning to see if they could be easily repaired. No such luck. I'm beginning to wonder whether I will bother to go any further with them. 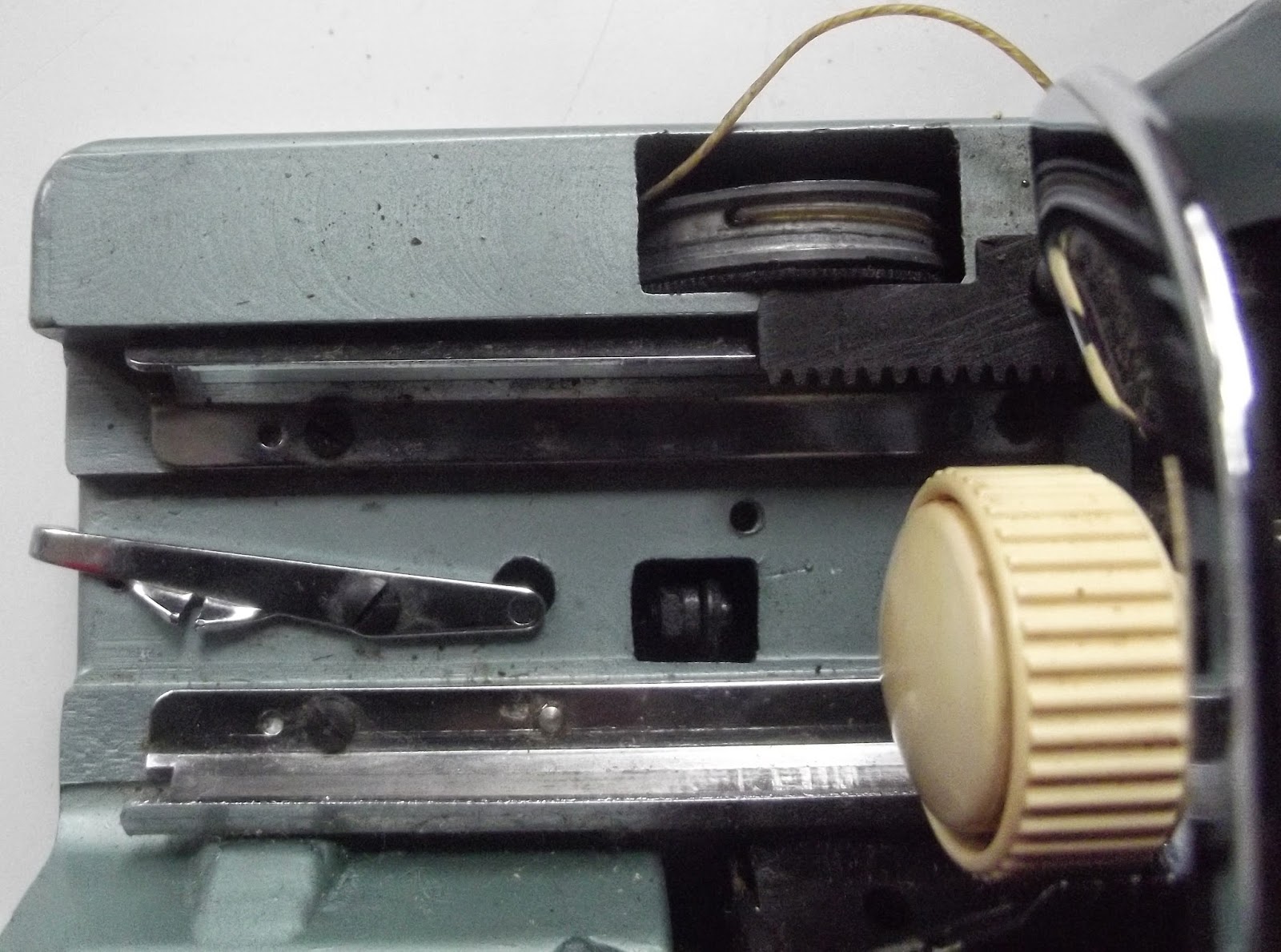 Above is the first machine I tackled. The first thing I tried to do was re-set the mainspring, leaving the drawband attached (and bearing in mind Ron Bowker's advice about finding it easier to work this way, rather than re-attaching the drawband to the mainspring after re-setting the mainspring).
Below is the second machine. Both drawbands were caught by something underneath the carriage, in exactly the same spot, but it was impossible to get a look at what was causing this. Since the drawbands remained attached at both ends, I figured the mainsprings had stopped turning while the typewriters was being used (by the previous owner). I assumed that as the carriage was moved with the mainspring stuck, the drawband (no longer running taut under the carriage) had got caught up and "bowed" out at the back. 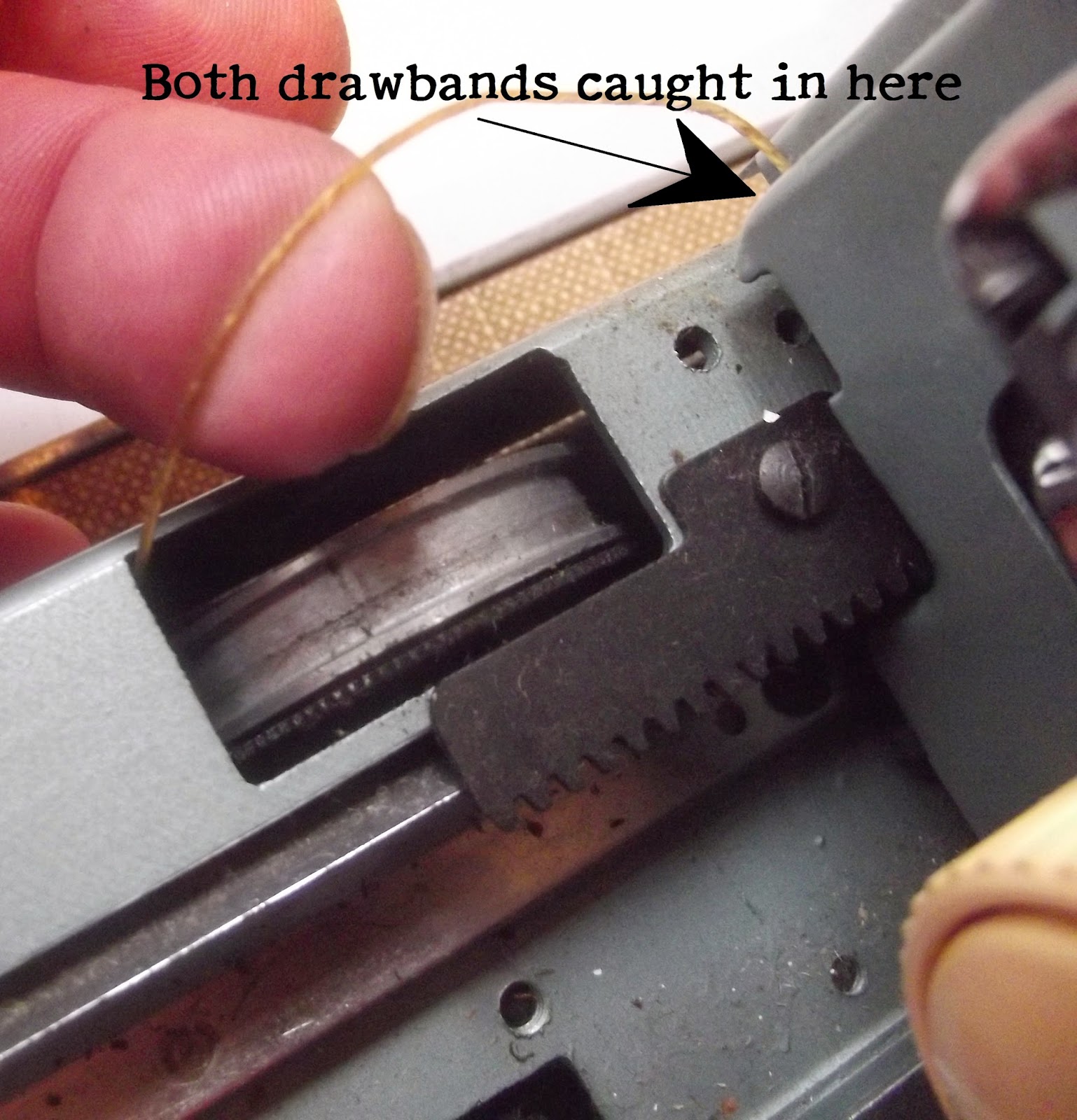 Sure enough, on machine No 1 I immediately became aware there was a problem with the mainspring, which was impossible to re-set. I could tell the spring inside the drum was OK, as there was plenty of life still in the mainspring, but it just wouldn't turn freely. I thought it might have become gunked up; but no - degreasing and lubrication didn't help much.
This meant taking off the bottom plate, no easy matter - eight screws! But removing the plate enabled me to get a decent look at the mainspring arrangement. A gear wheel slots on to the mainspring and is held in place by a screw that runs through the mainspring and attaches to a nut on the other side. 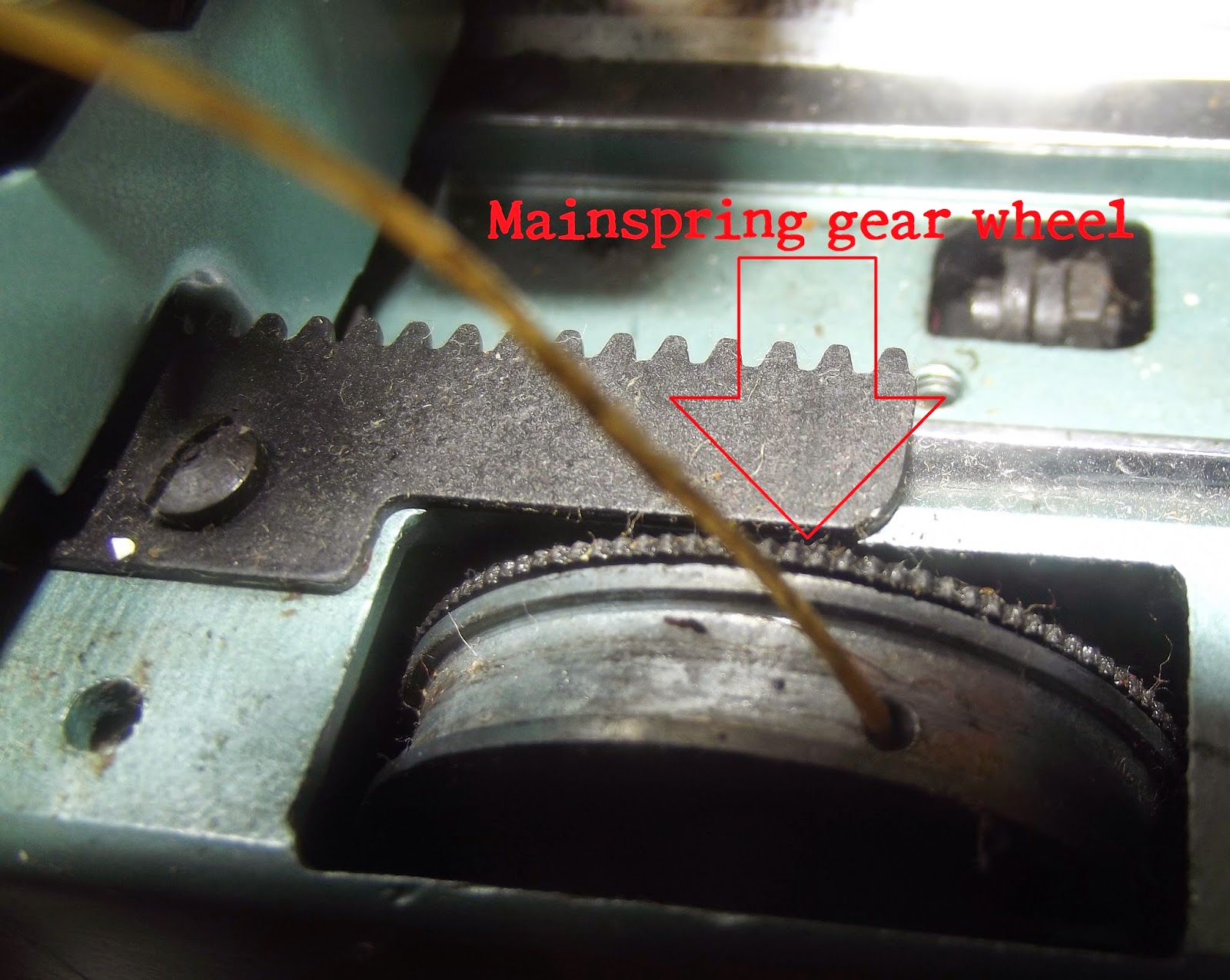 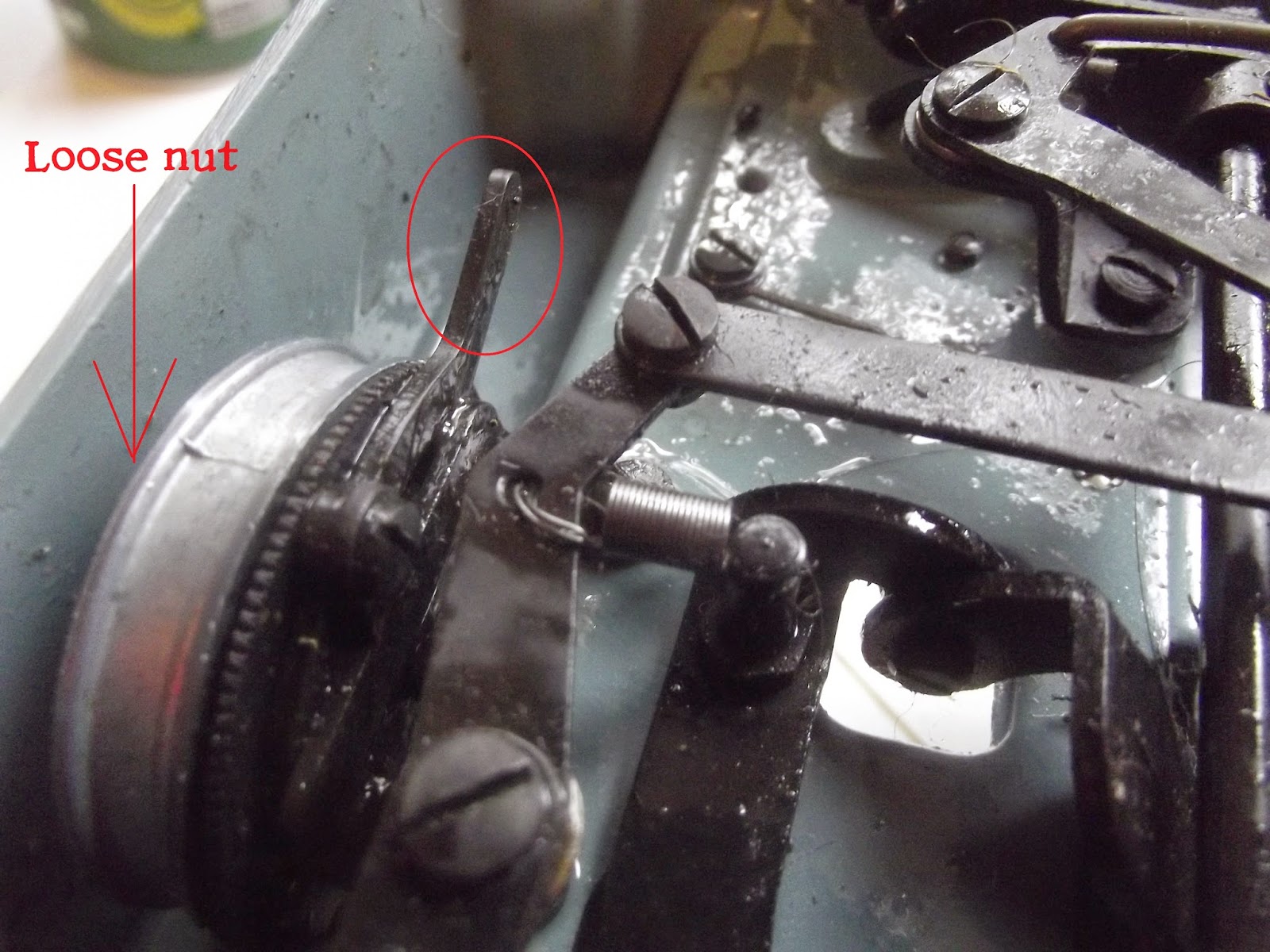 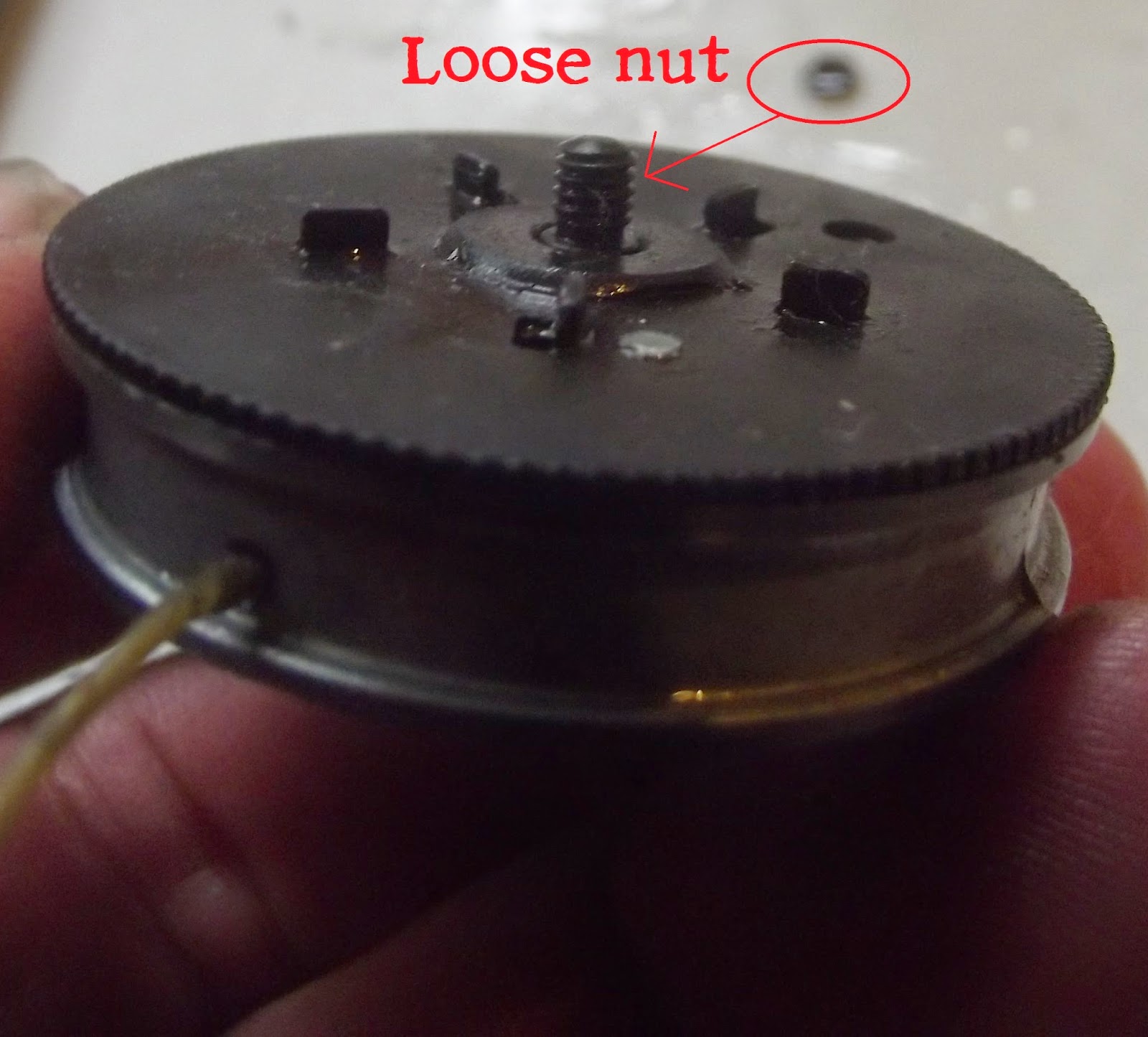 As I wasn't able to work out how to remove the mask from the guts of the typewriter, I couldn't re-attach the nut. So I gave up on that machine and moved on to No 2.
On the second machine, I was able to re-set the mainspring fairly easily. I clipped the drawband at the right end and made sure the drawband was moving smoothly - without striking any obstacles under the carriage - while maintaining tension on the mainspring. Then I re-attached the holding nut and tied another knot at the right end (see below). 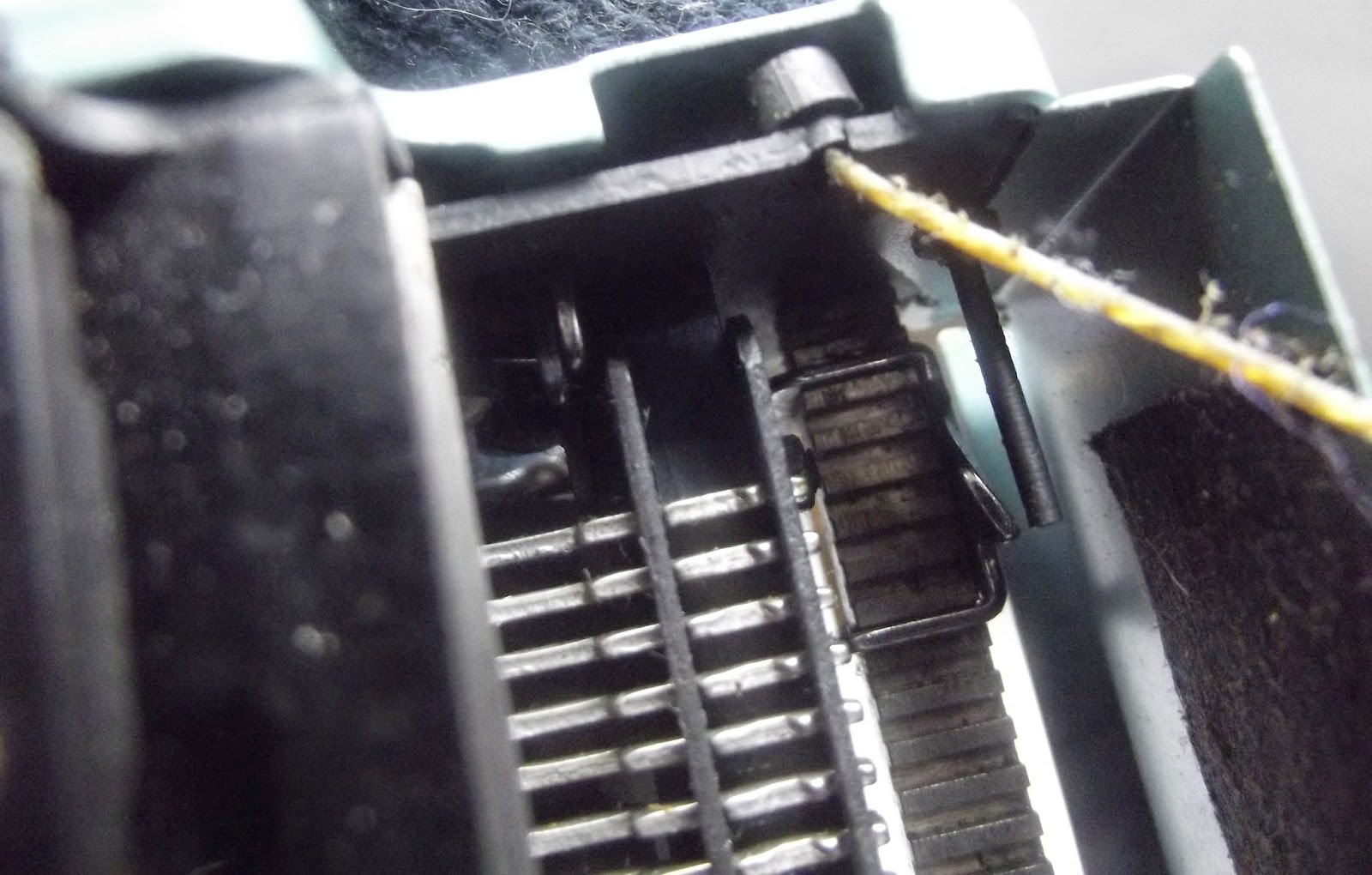 All seemed well. The typewriter started to work as it should. But after a good bit of movement of the carriage as I struck the keys and spacebar, suddenly there was that all-too-familiar "zing" of the mainspring unwinding and the drawband was bowed out the back again. I re-set the mainspring and re-attached the drawband twice more, each time with the same result. So I gave up on No 2 as well.
All this while I kept thinking about how much trouble Richard Amery and I had gone to, some years ago, to find a Model 7 for Richard so he could complete his full set of Imperial Good Companions. Eventually we found one for sale on Trade Me in New Zealand, but even then Richard had the Dickens of a job getting it to Australia.
Until that time, neither Richard nor I had seen one come up for sale. But since then I have seen a few appear on Australian eBay. Indeed, I own at least two myself now (not counting the two from the "booty") - a salmon-coloured one and one the same aqua colour as the two above.
I've had no problems with the ones I've used. But finding these two from the "booty" to have identical problems has made me wonder about the design.
It's also made me think just how often people who owned and used manual portable typewriters ran into problems like this, when the machines stopped working. More often than not it would simply have been a drawband-mainspring problem. I think it's fairly clear that the response was to just abandon the typewriter - to dump it, throw it out or take it to a recycling centre. The two I worked on today were found at re-cycling centres.
Generally speaking, a problem with the drawband breaking, or getting stuck, is fairly easily fixed - these two machines obviously being an exception to that rule. But I suspect most typewriter owners didn't bother to make the effort. "It's buggered," they declared, and so it remained "buggered". I'm buggered if I know why they didn't try a little harder to get their typewriter working again.
Posted by Robert Messenger at 13:58

happy typewriter day once again robert - and thanks for the pics and descriptions of this machine and it's common issue and fix. im sure it will be a good reference for many years to come!

Yes, Robert, I have always had some kind of trouble one way or another with GCs. If you keep those machines I would like to have a go at them for you

Thanks so much for your enjoyable and informative posts.

I notice this is a fairly old post. Did you ever have another go at re attaching your drawbands?

If you didn't and you still have the machines, I would be more than happy to help. I spend today with my newest machine, a model 7, repairing the bell, variable line spacing and cleaned and regreassed and reattached the drawband. Just let me know if you need any pointers.

AHA! I have just found your blog about the Imperial Good Companion design fault. I have one of these machines (serial no 7AA 348) which has this exact problem - loopy drawband, looks like a loop of catgut poking out from under the carriage. Carriage return lever seems to be floating ie not attached or functioning, and the carriage doesn't move along when keys are depressed.

The machine was my constant companion 55 years ago in it's beautiful brown leather case and I would quite like to see if it can be fixed. Hopefully with the help of your great pics and instructions it just might be possible.

Thank you for all the info.

I have this model, but the string is broken, is there any way to fix it then, or should i simply just give up?

If you read this post it explains how to reattach a drawband.

Hi, I am fairly new to typewriter. Found this post too. luckily i managed to fix the problem by myself! managed to adjust the mainspring!