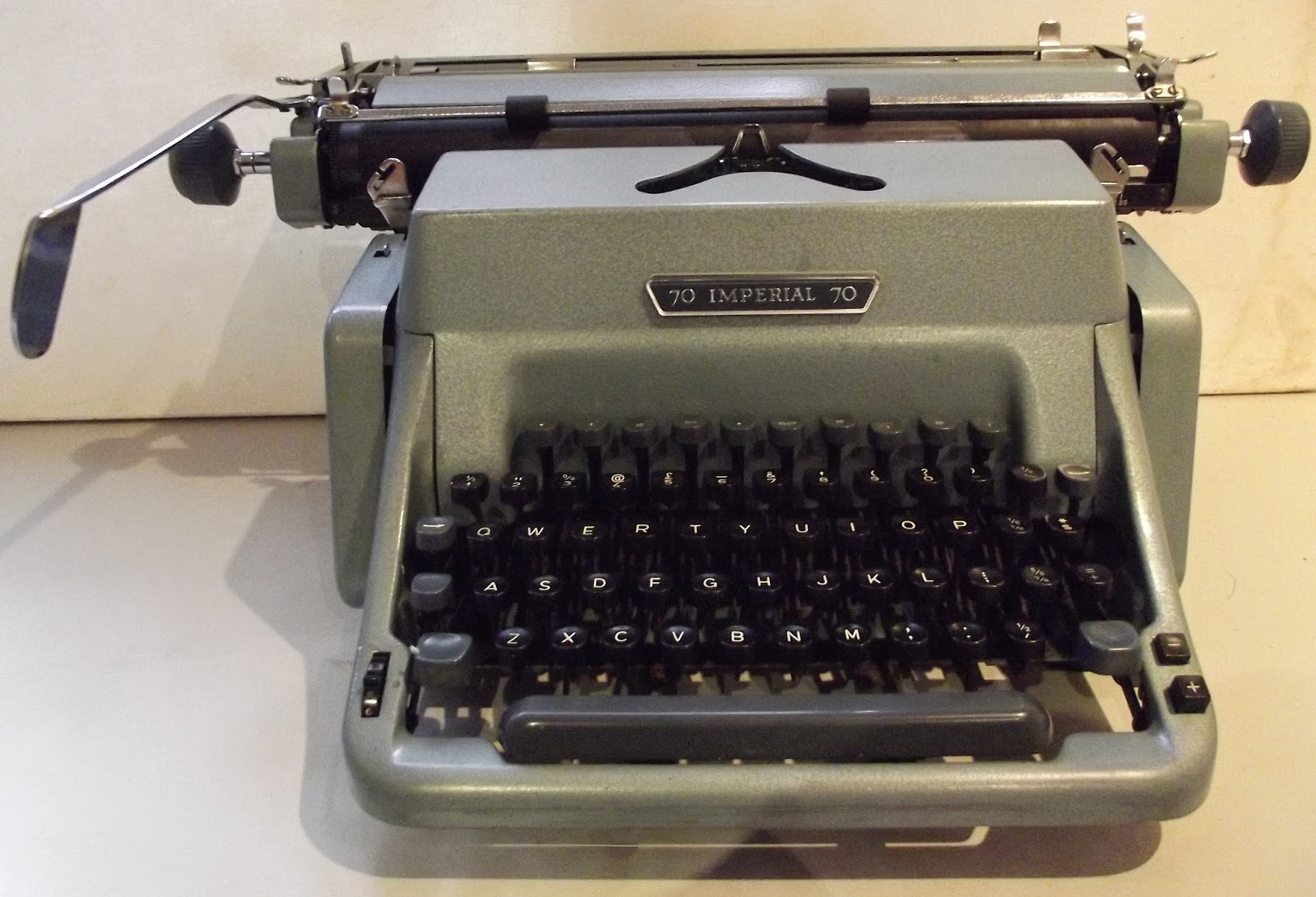 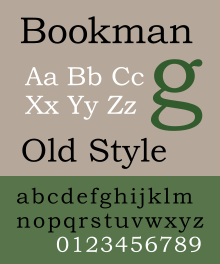 Back plate
Well, I'm not Rumpelstiltskin. I had this arduous two-day project completed just after midday today. All up, it was probably close to a seven or eight-hour undertaking. But it was well worth the effort. The Imperial 70 is working wonderfully well (I made no effort to retain the carbon ribbon facility), it looks brilliant - and I really love its "Bookman Old Style" typeface.
Having hoped for fine weather today so I could resume the job, by taking the typewriter outside and giving it a decent blow-through with the air-compressor, I woke up to black skies and heavy rain. Nonetheless, I was able to find a sheltered spot, and so the work progressed unabated.
I had left the segment area soaking in degreaser-cleaner foam overnight and was pleased this morning to find the section to be sparkling clean: 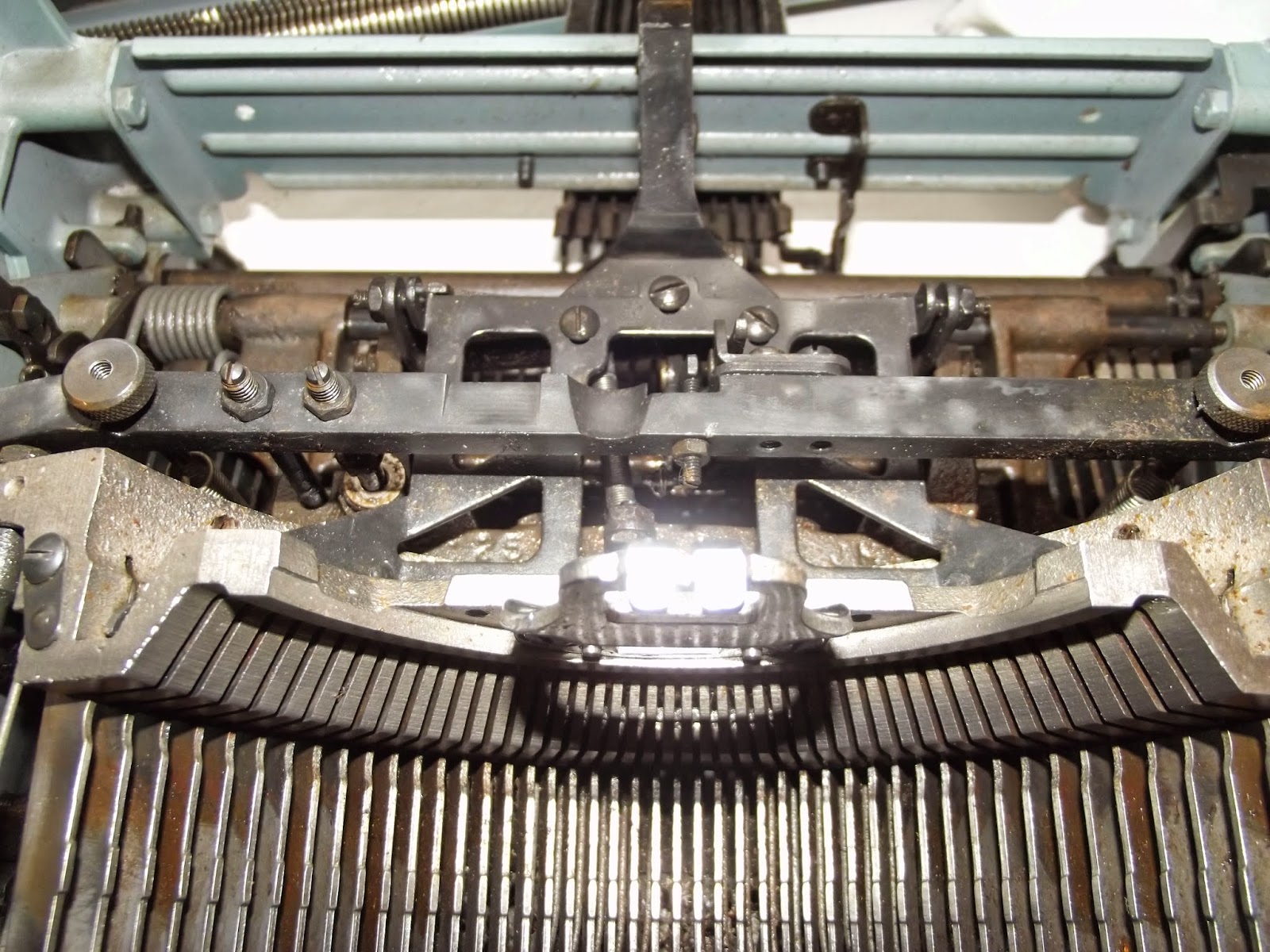 One positive sign of this was that all the springs, big and small, had shaken off years of built-up grease and grime: 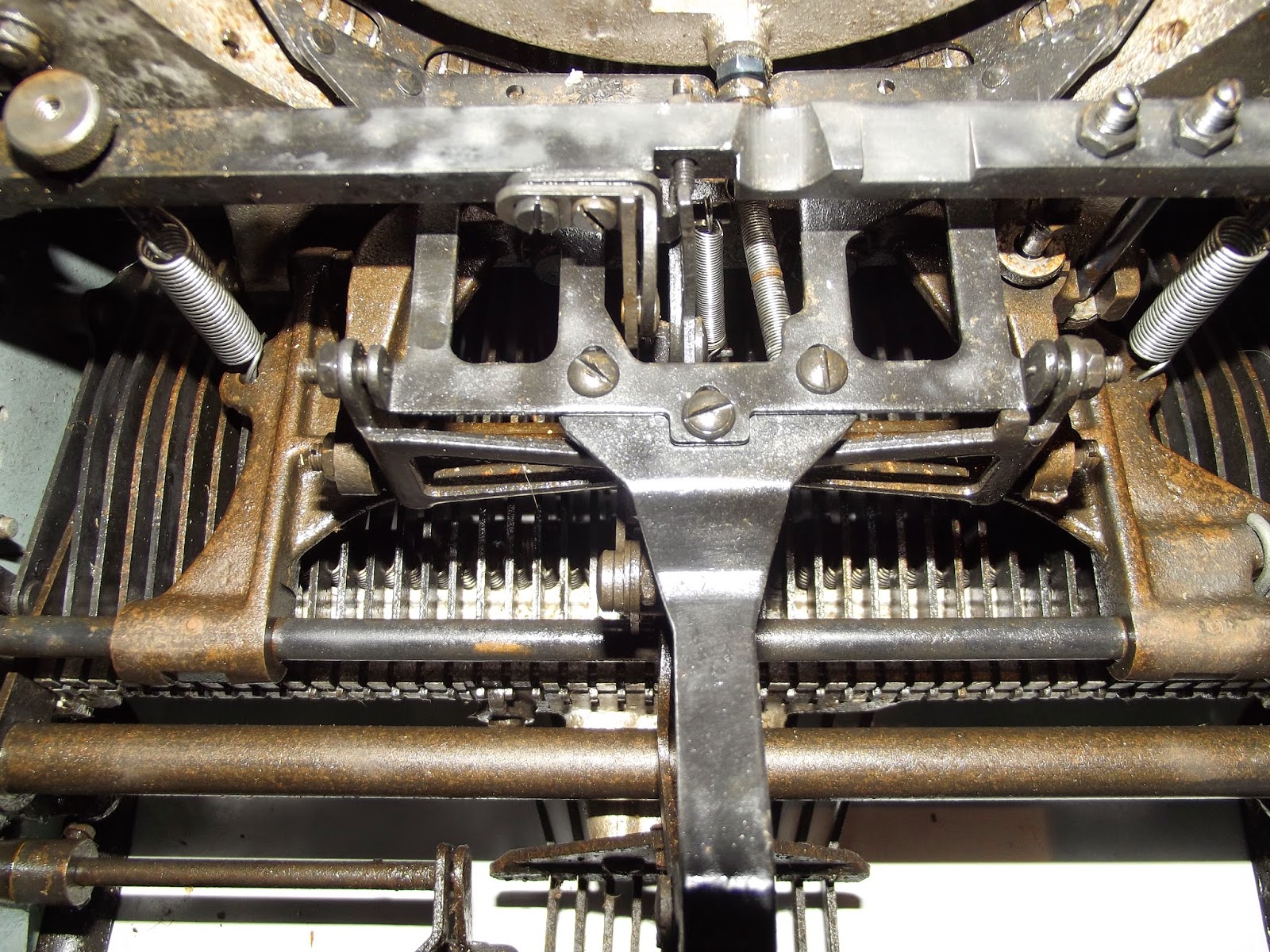 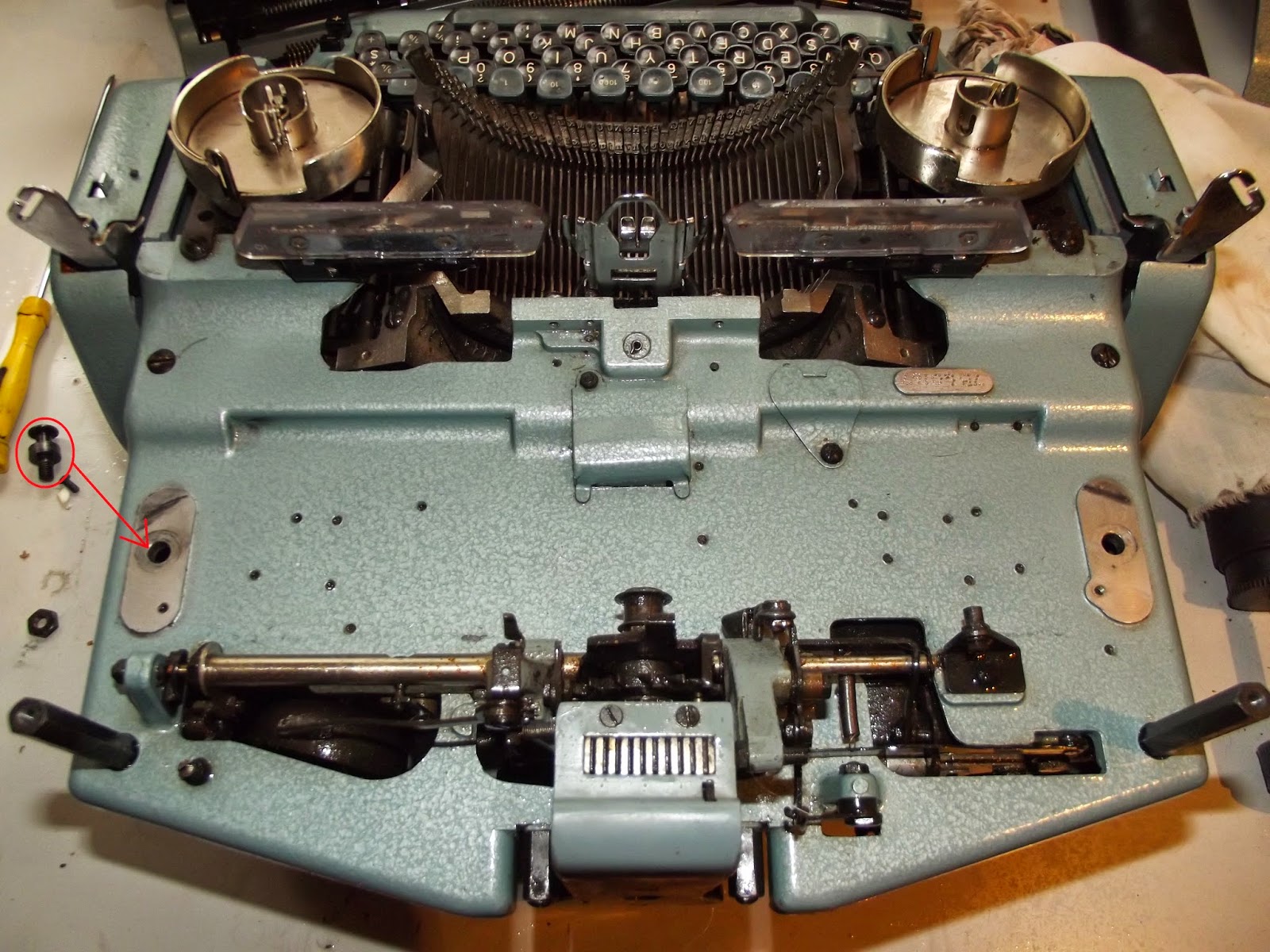 The next step was to repair the snapped drawband, rewind the mainspring and reattach the drawband to the mainspring and to the carriage. All of this was a quite difficult two-handed task, but being able to wedge the re-wound mainspring in place with the end of a long, narrow screwdriver (see below) helped considerably: 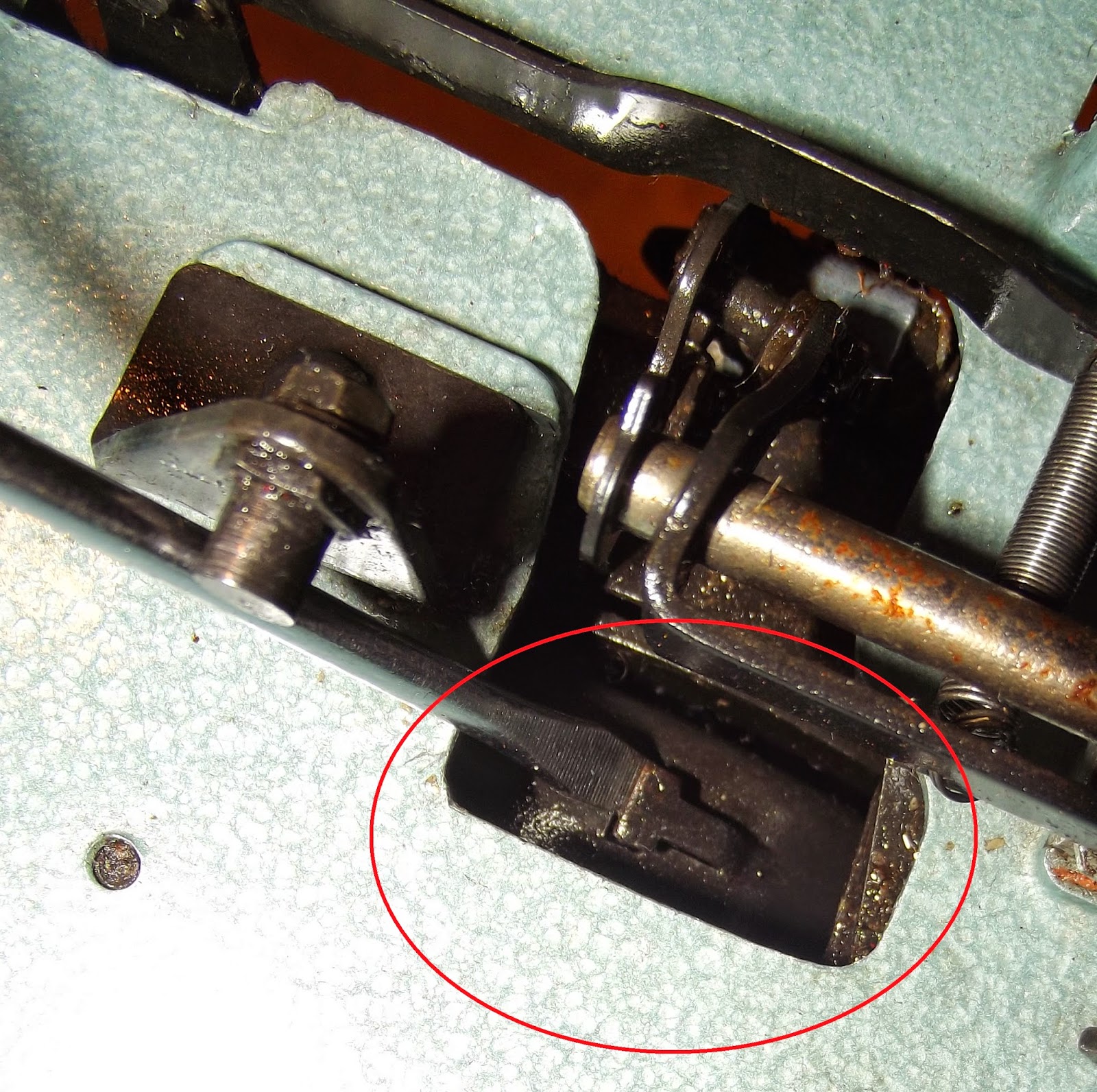 I had spoken to John Lavery last night about this "work in progress" and he had advised "seven turns" of the mainspring to get the right tension in the drawband. The drawband emerges from under the large plate, through a guide and over a roller, as seen below: 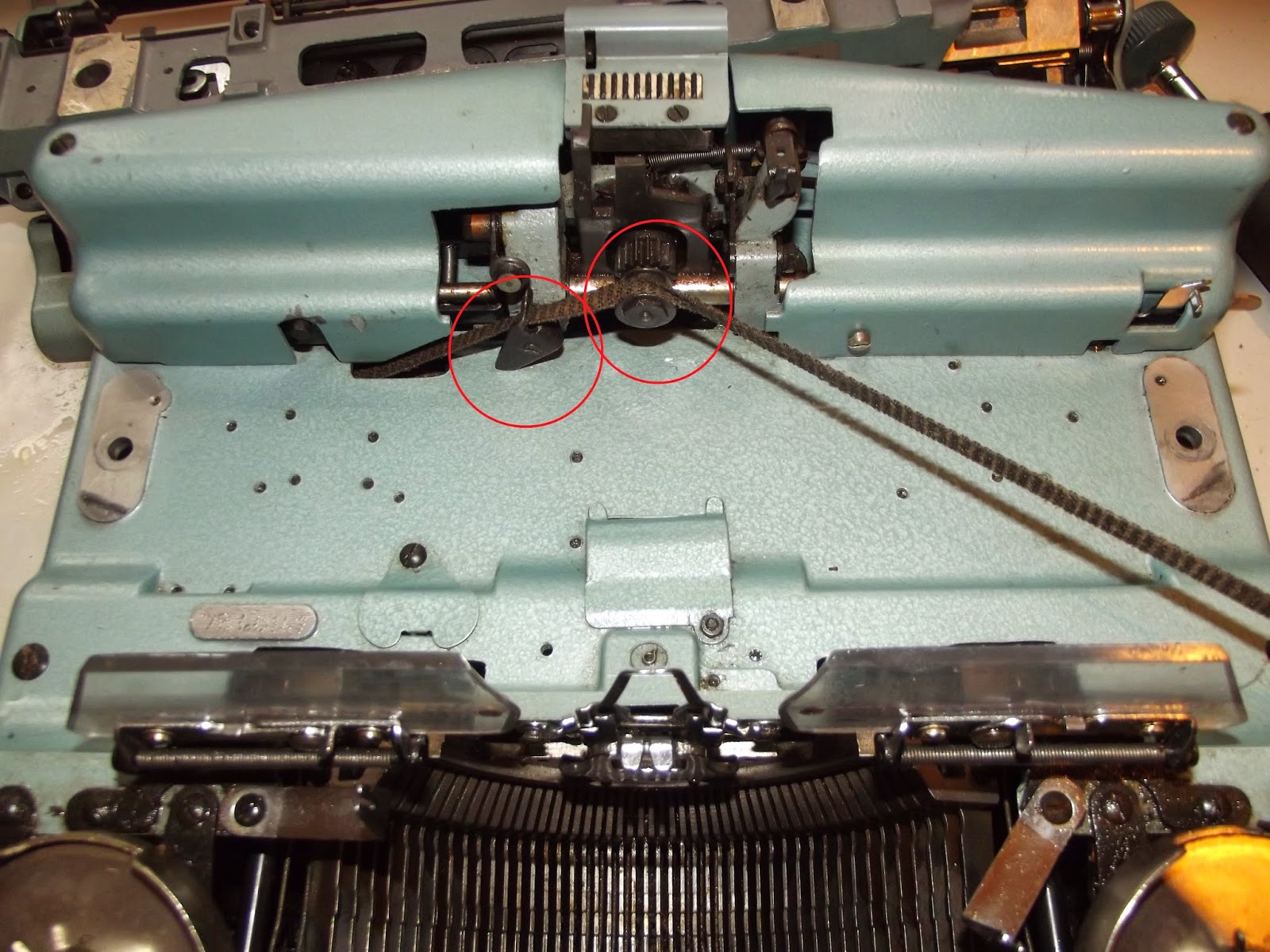 As explained earlier, I had decided to ditch the carbon ribbon facility, as I would have no use for it. Taking off the spindle to which the chain belt (below) attaches, to turn the carbon ribbon spools, allowed me ample access to improvise a large nut to hold the errant stud firmly in place. At one point I was even tempted to use bits of the chain belt to improvise connecting end-clips for the drawband, as one of these had gone missing. Eventually I used another method, which proved very successful. 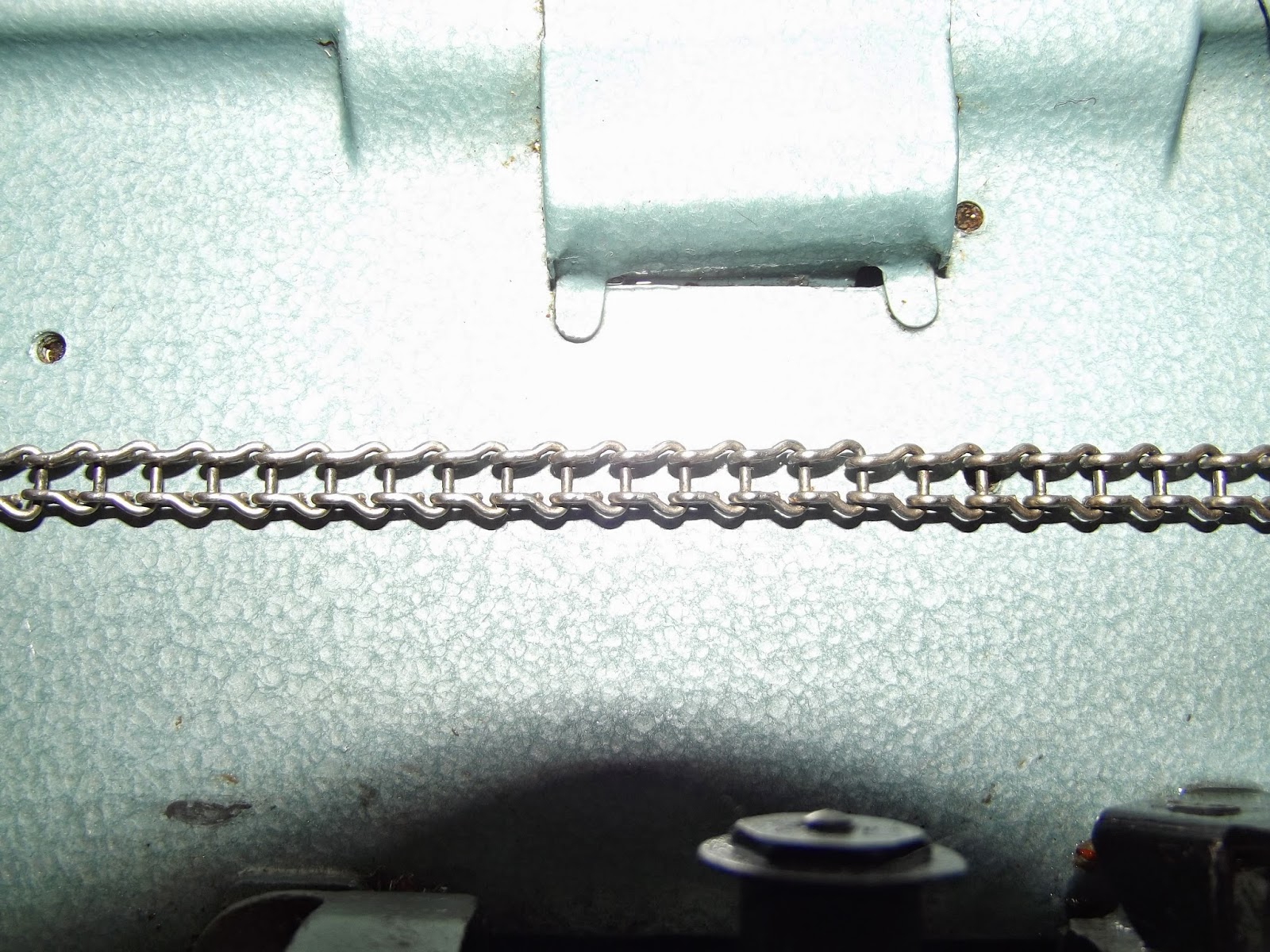 Having got the errant stud sitting properly in place, replacing the carriage component, drawband attached, was relatively straight-forward. 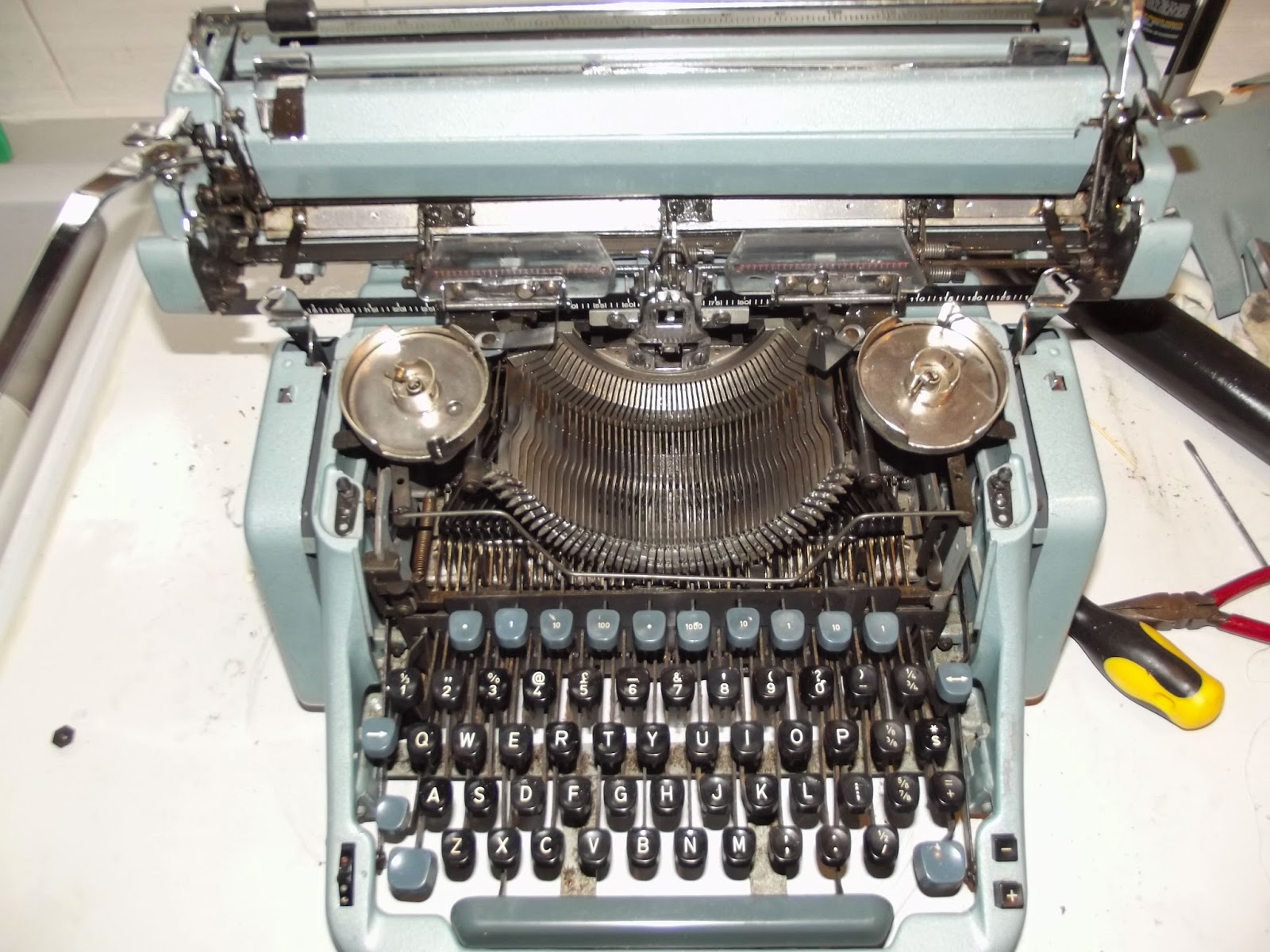 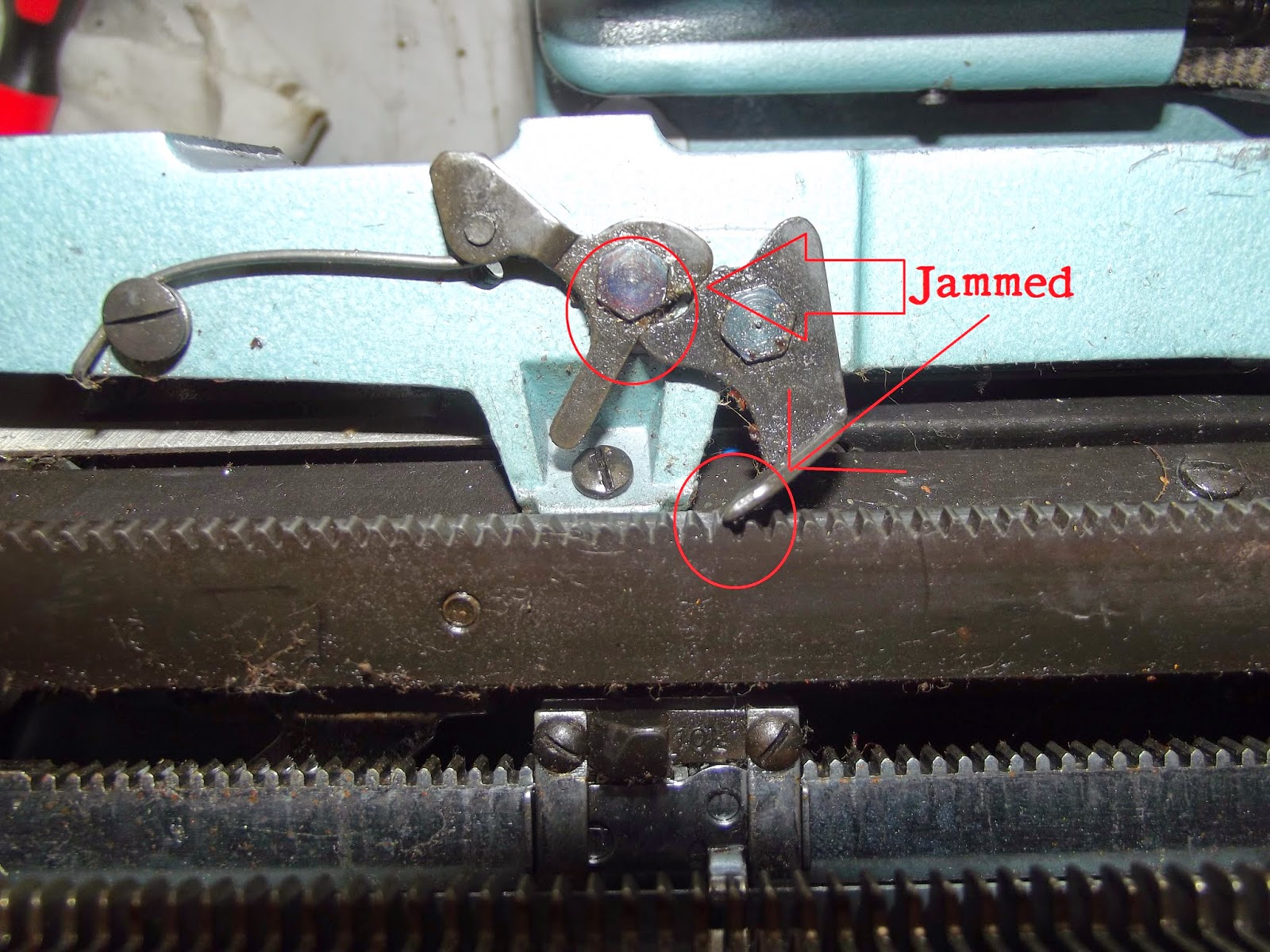 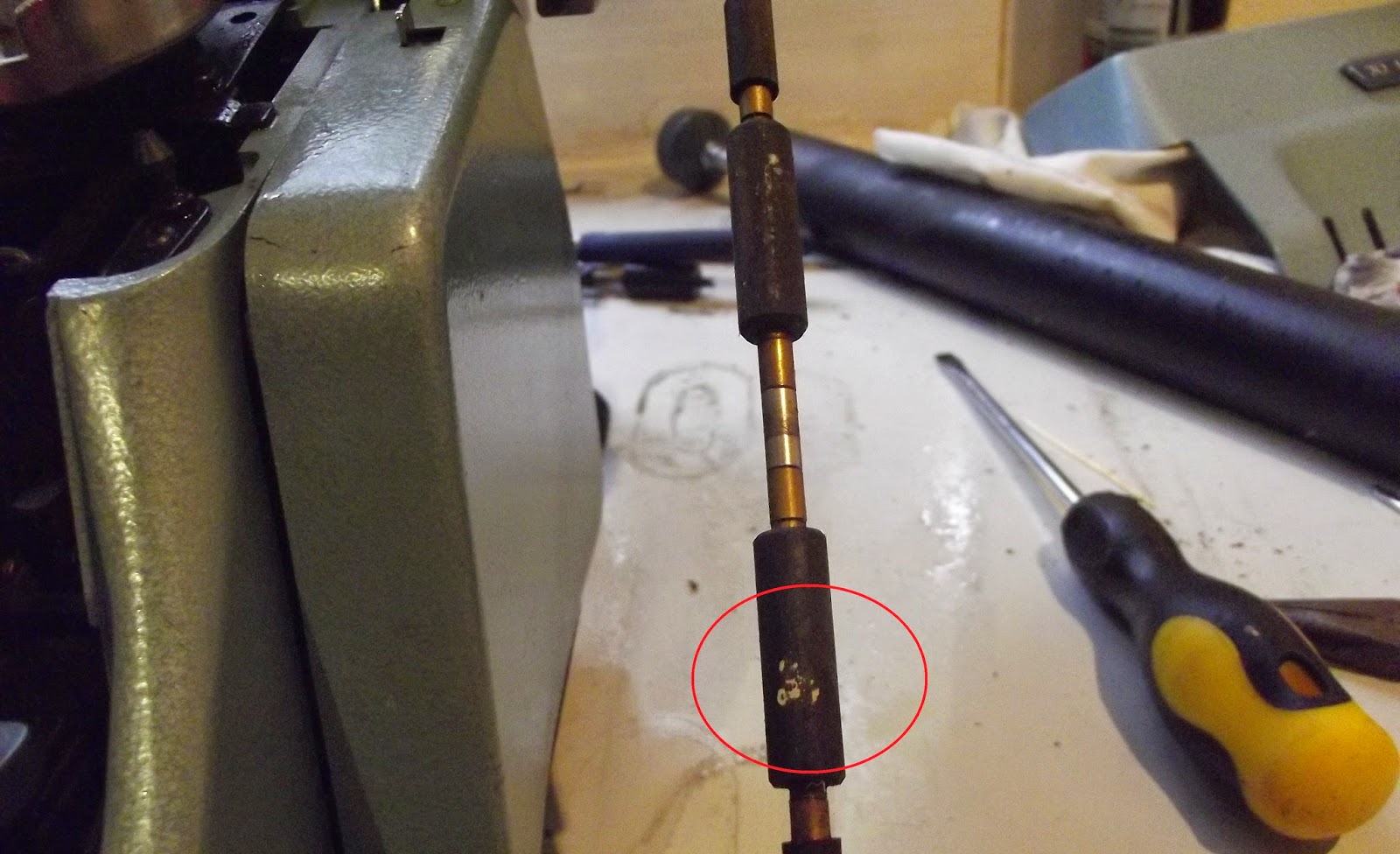 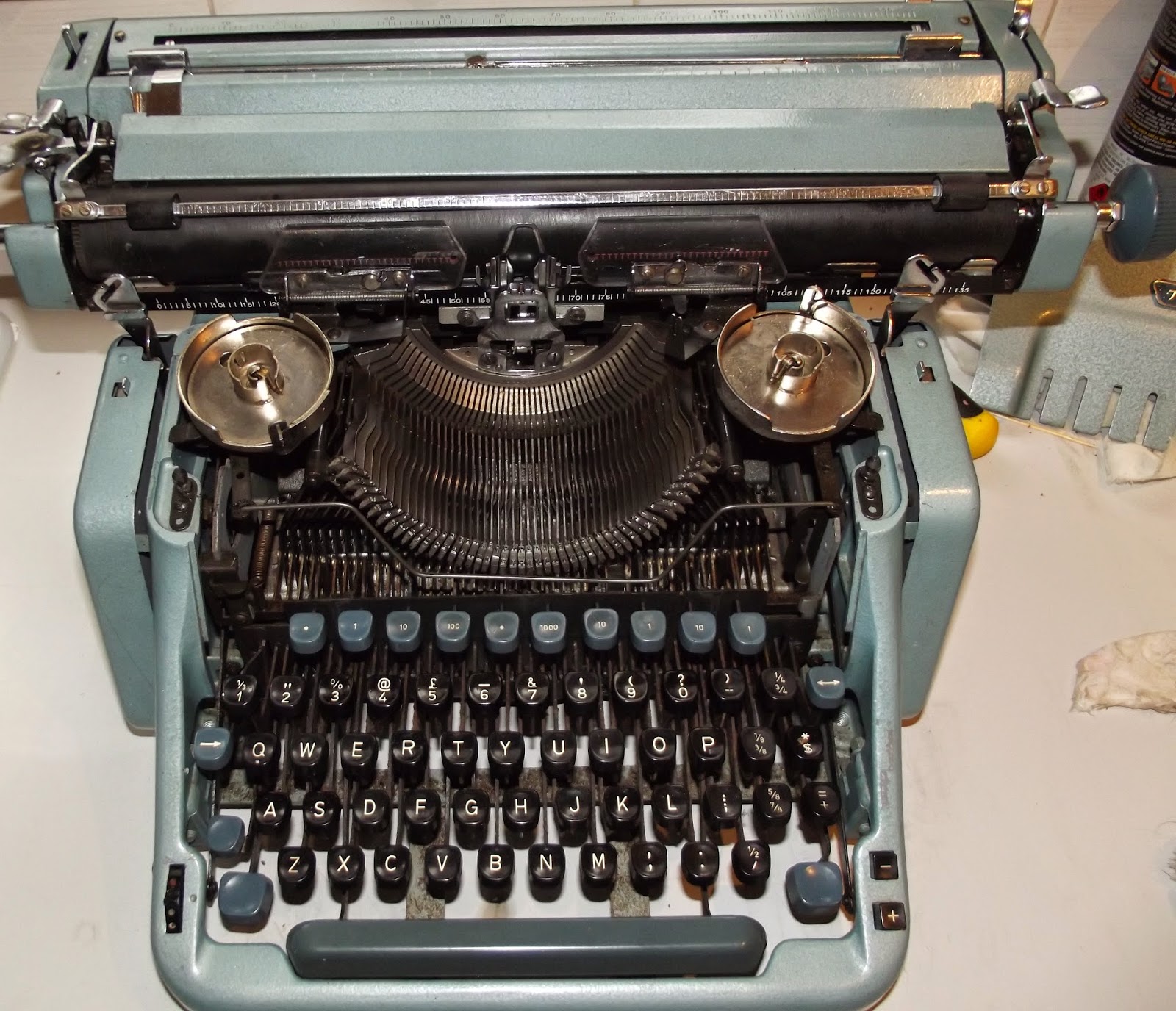 That left just one touch-up job, a scratch on the front right. As I dealt with it, I was pleased to note that this Imperial, too, has Richard Polt's favourite typewriter fraction key, the 5/8 - which also happens to be my favourite position in a rugby team. Do you know how the five-eighth position in rugby came to be? In 1902, Otago coach Jimmy Duncan created a midfield to go with the 2-3-2 scrum. As a toolmaker, Jimmy knew that the alignment between the threequarter line (six-eighths) and the halfback (four-eights) had to be five-eighths. As simple as that ... 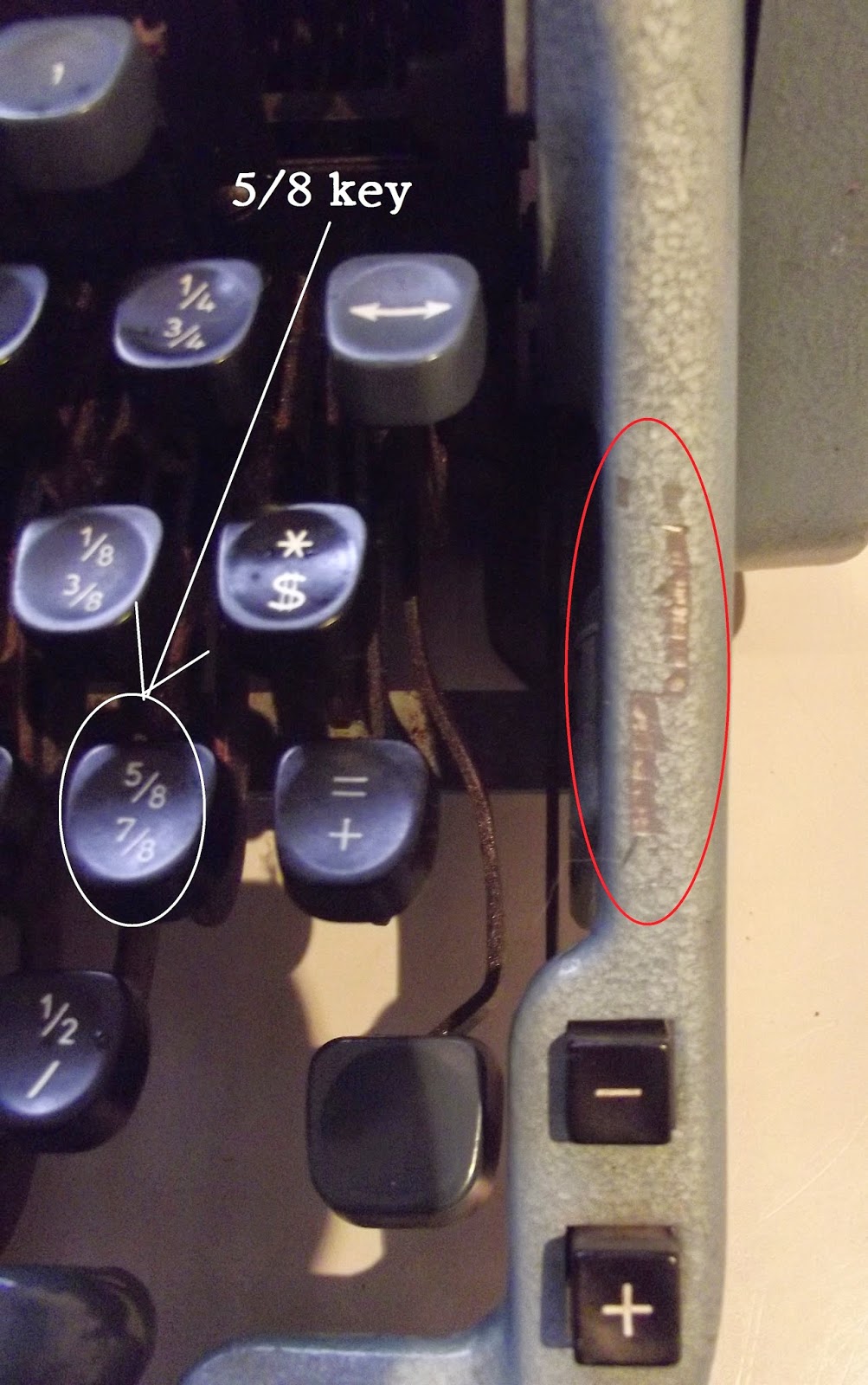 And when this total transformation of the Imperial 70 - less than 36 hours earlier in such a terrible, horrible mess I was strongly tempted to chuck it out - was complete, it all suddenly seemed to be equally simple. It wasn't, of course, but I am thrilled with the result - a beautiful, fully functioning (forget the carbon ribbon) typewriter, sparkling like a National guitar, not to mention the Mississippi Delta, and an absolute joy to type with - especially with this Bookman-like font. I am so glad I persevered with this machine and was able to restore it to its former glory, and am so thankful for John Lavery's encouragement and assistance in doing so. 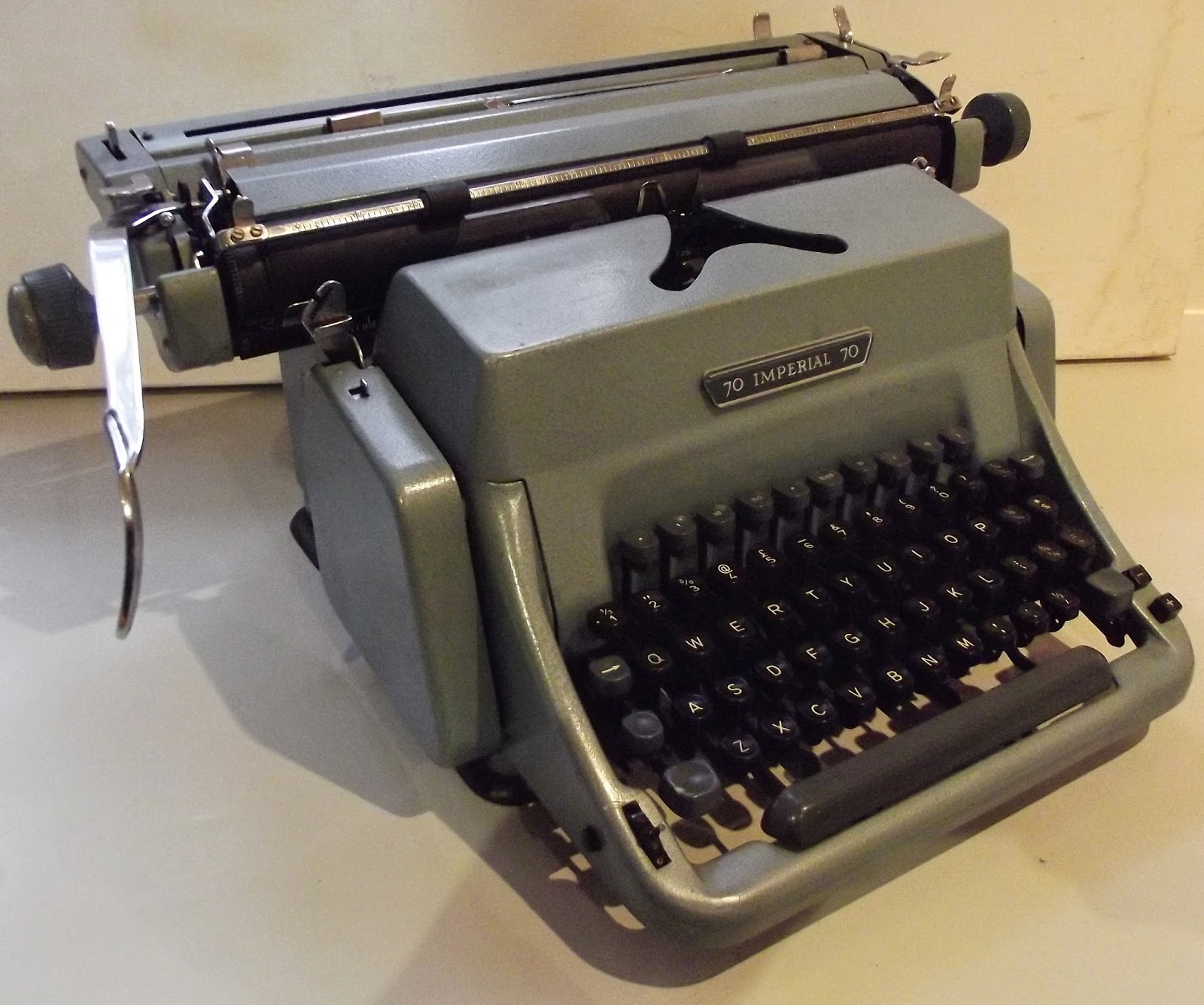 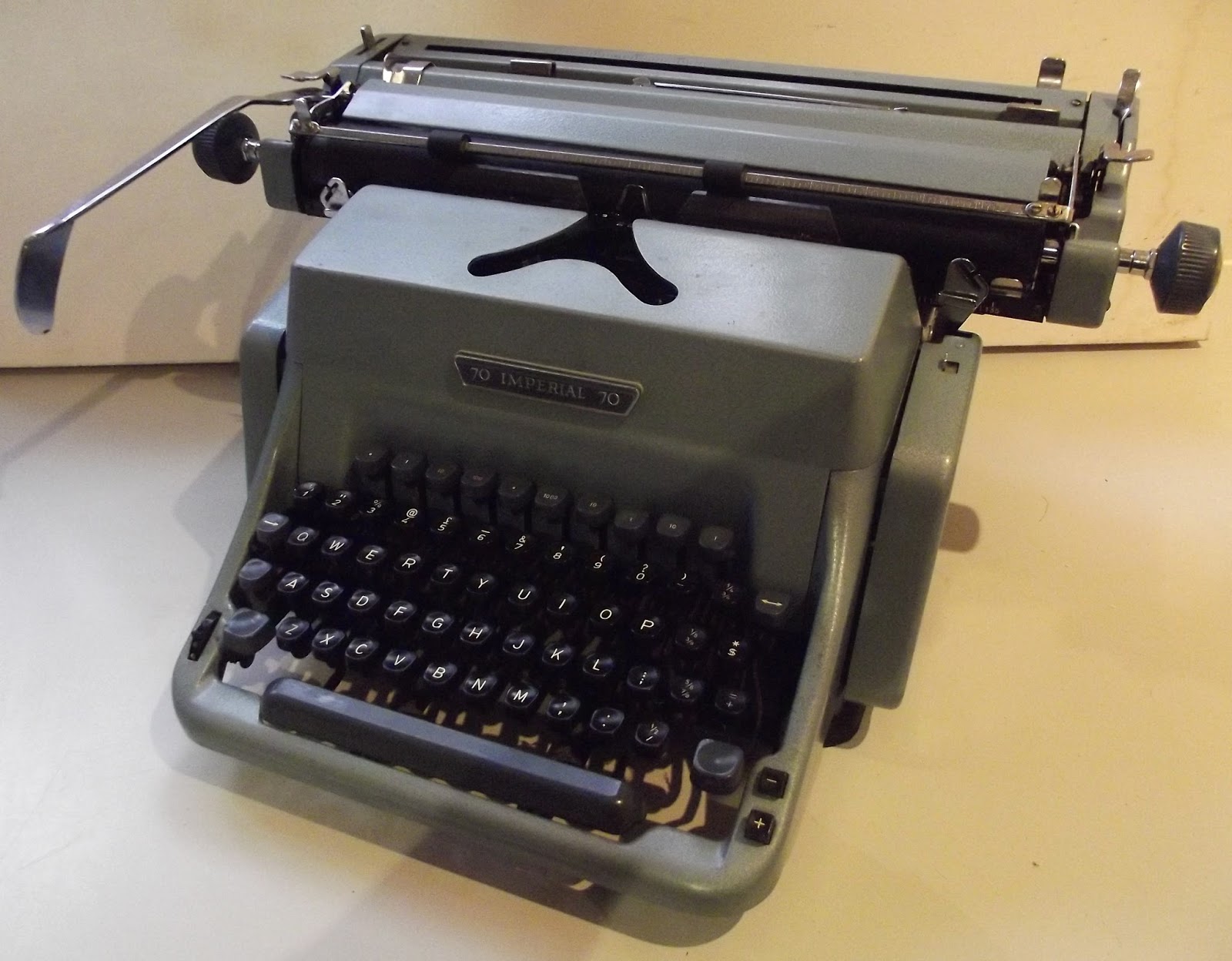 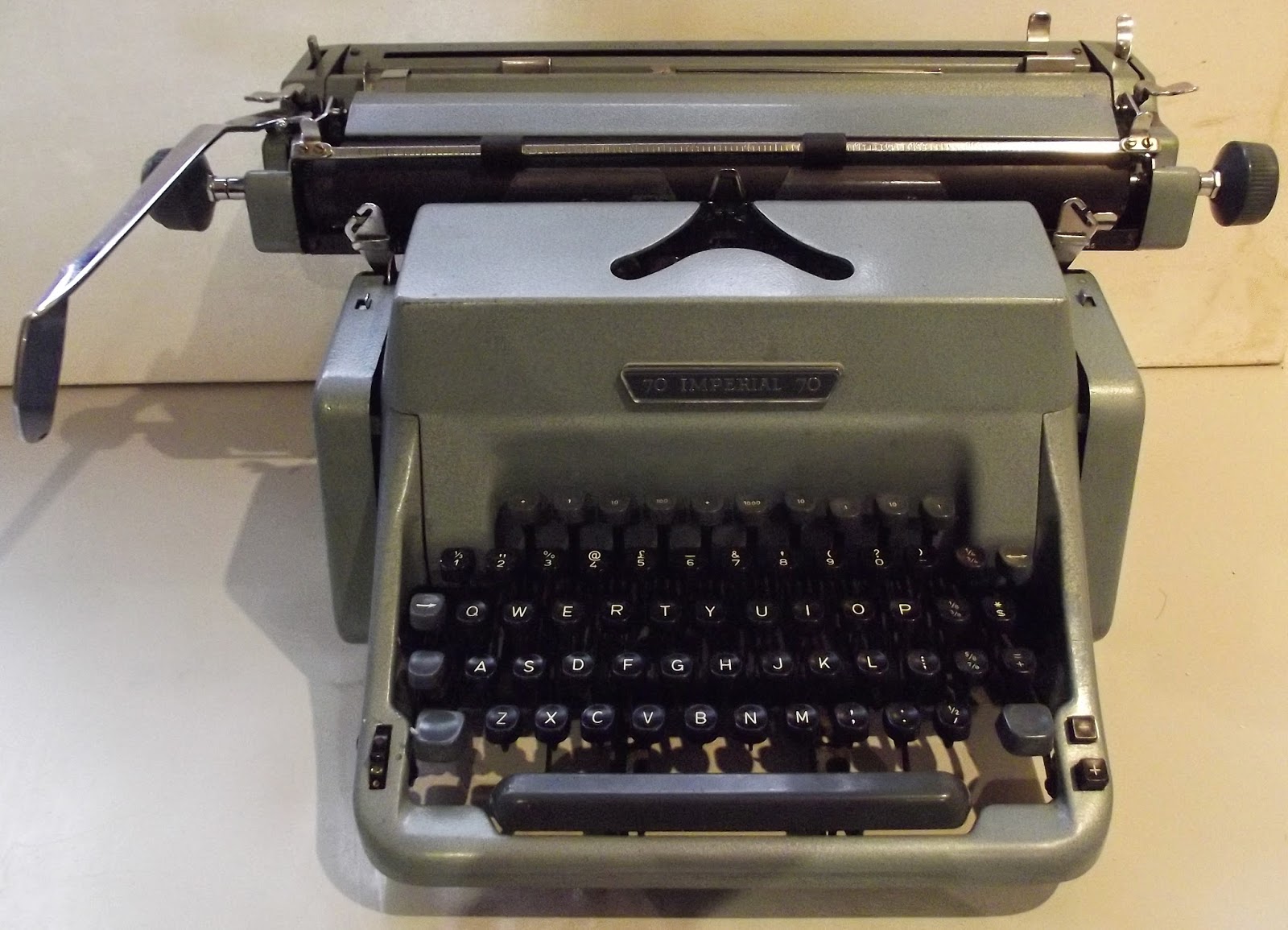 A week ago it was this, broken and disheveled: 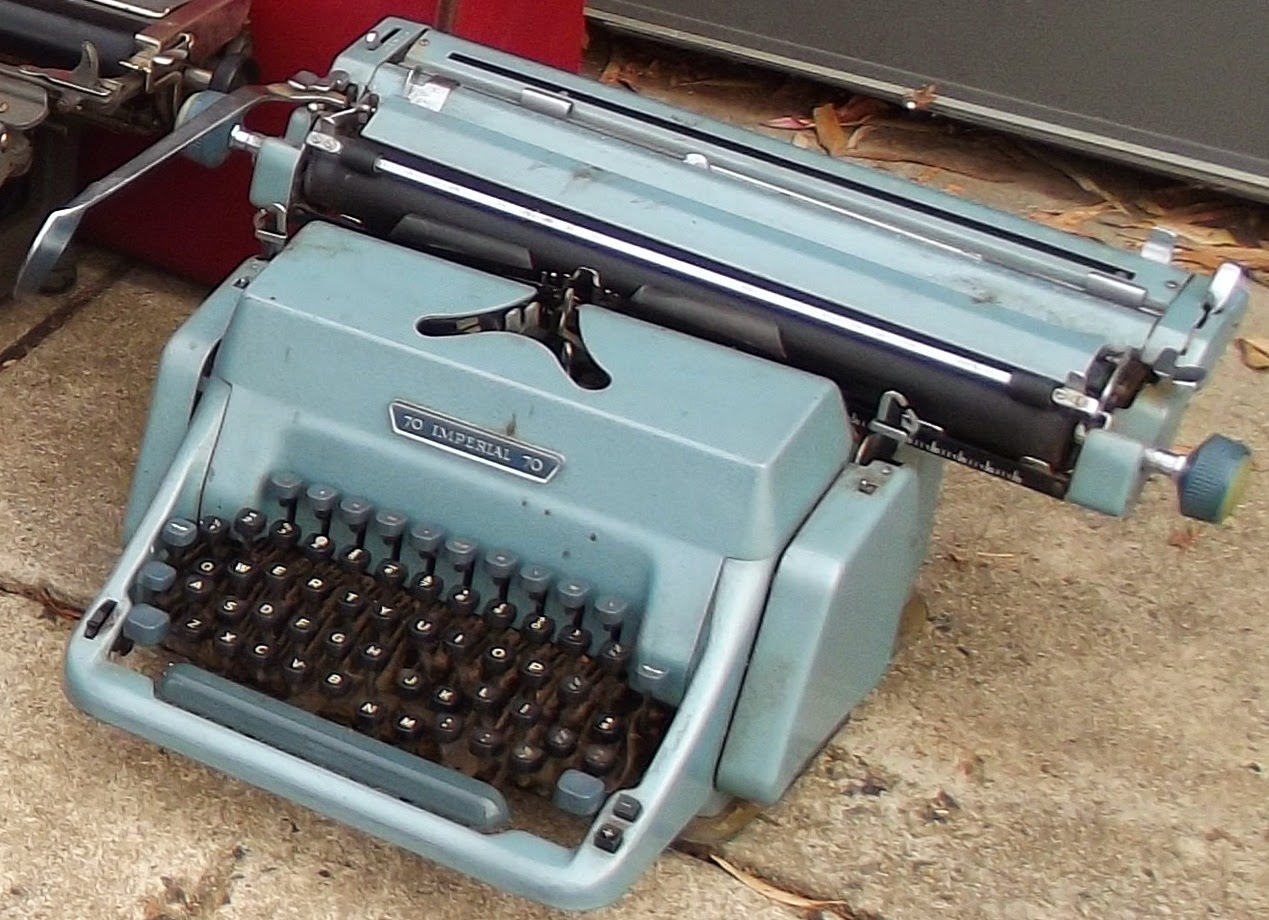 Posted by Robert Messenger at 16:57

Nice work Robert, you have breathed new life into the old girl. That typewriter will make some happy long into the future. The green ribbon is a nice touch. The type face is exactly the same as mine!
Congratulations once again, and I am very glad that you saved such a lovely machine from the rubbish tip.

Very impressive Robert. Part I offers so many useful tips too. Great work. :)

Brilliant work. It's a very impressive beast and the typeface is fantastic.

British comedian Eddie Izzard just did a show in Cincinnati, which my family caught, and his funniest bit, believe it or not, was about fractions.

Foam degreaser is a product that really hasn't been on my radar, but it sounds really useful. If you can, I would appreciate a little followup story about the best uses of this product, any cautions, etc. (Good material for the book!)

Congratulations on your fine repair. I love the great looking clean typeface. The green makes it especially nice looking.

I've used foam degreaser on engines,but I never gave thought to it for a typewriter. I need to give it a go on my next project machine.

I really like the color and the crinkle effect of the paint; is it a metallic blue paint, by chance? How old is this typewriter?

So, is this beauty pale blue, or grey. The befores look blue, the afters look grey.
It has the feel, and solid look of my 1955 Adler Universal, - yes, what year is it from?
Great work Robert - I love the older "office standards"

Thank you all for your very encouraging comments. In Ozzie lingo, I'd be described, in terms of typewriter mechanics, as knowing "five-eights of f*** all!"
Richard, I have followed up on the degreaser. I believe this one does sell in the US (the company is British.
Miguel and Donald, yes it is metallic pale blue, you must forgive the lack of lighting in my kitchen.
The serial number is 7B60157, meaning it was made in Leicester in 1967, after the Litton takeover. The 70 was made from 1962-1968.

The carriage brake must have come in very handy for service engineers. I don't think such a feature appeared on earlier Imperial standards, at least not the 55 or the 66. Once the carriage strap is removed, it is like wrestling a bag of eels to keep the two parts of the sub-assembly in check. My guess on the wonky assembly? The little silver release buttons look so tempting to push, I reckon someone pushed one, half-heartedly pulled up on the carriage and then panicked - end of chapter 1.

I picked up one of these yesterday for $60, and if it was not for your post, I would not have been able to fix it ( I had the same problem as you with the wonky carrige.)

Thanks for your article on restoring the typewriter.
I'm considering purchase of one of these but I am confused by the different panels on the side. Are these for holding carbon ribbon?
This machine is like yours...
https://www.facebook.com/marketplace/item/244433623680807/
This machine i slike the ones I remembered at The Adelaide Advertiser
https://www.facebook.com/marketplace/item/511818726471902/

Hi
Could you tell me the length of the drawband. I have a similar problem. Exceot i have no drawband on mine. I have to make a new one ��