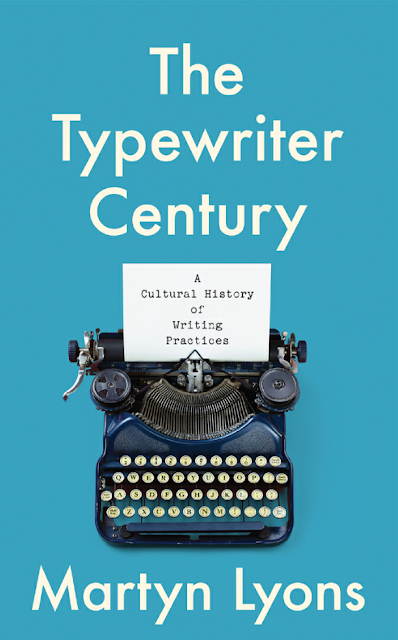 There’s a new “typewriter” book on the market. I put quotation marks around the word typewriter because this is a book primarily about the use of typewriters to write rather about typewriters per se. There is some typewriter history in it, however, and there lies the rub. The book is written by a 75-year-old emeritus professor of history and European studies at the University of New South Wales, Martyn Lyons, who is a specialist in the history of the book. It’s called The Typewriter Century: A Cultural History of Writing Practices and is published by the University of Toronto Press. Be warned. Susan Lever, in reviewing the book in the Inside Story section of today’s The Canberra Times, says Lyons’s overview of the typewriter’s development is “fascinating”. It may well be fascinating to Lever, but it’s not actually all that factual. (And I don’t think, as Lever claims, that Georges Simenon and Erle Stanley Gardner sold books for a few pence on the railway stands, either.)

The book begins by calling the typewriter “a now extinct species”, which of course is a very long way from the truth. Lyons goes on to say the “typosphere” is how he refers to “the global imagined community of typewriter users”. Are we imagined or are we real? It seems pretty real to me. Lyons adds that this “imagined community” “was also a global market [his italics] of users in manufacturers’ eyes”. Since manufacturing of the typewriters that Typospherians in the main still use had ended before the Typosphere began, I can’t see how this makes any sense. That is unless Lyons has usurped the name of our community to embrace the history of typewriter since the 1870s, which indeed seems to be the case. 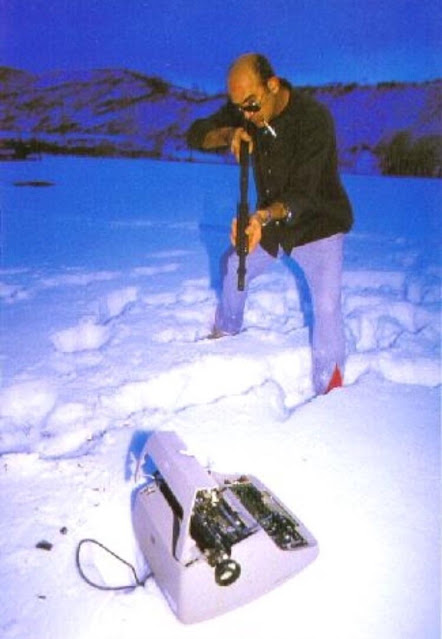 The introduction and notes section both start with a quote from me about Hunter S. Thompson taking his IBM Selectric out into the snow and shooting it. This is closely followed by another quote from me about Paul Auster regarding his Olympia SM9 portable as a sentient being. The trouble with this is that both of these quotes come from an article I wrote for Gia Metherell at The Canberra Times 12¾ years ago. Which doesn’t fill me with confidence about the depth of research for Lyons’s work, especially given what I know about typewriters now and what I knew about typewriters back on February 14, 2009. In the 4626 days since then (actually, since February 27, 2011, which is still 3883 days), I have written and published online 2754 blog posts on typewriters and their history, each of which has been very thoroughly researched. In the process of writing these blog posts, my knowledge of typewriters has advanced exponentially. I mean that literally.

There are many other references to my articles in Lyons’s book, including Ettore Sottsass on the Olivetti Valentine, but these aren’t credited. Too bad. This is the sort of book that just picks bits and pieces from wherever it can find them and throws them together like a potpourri. It’s nowhere near as well “constructed”, with original ideas and well-thought-through narrative, as, say, Richard Polt’s The Typewriter Revolution. Lyons has, one assumes, read Richard’s book, because he writes, “Richard Polt elevates this counter-cultural movement to the status of a ‘typewriter insurgency’, which embraces old technology and rejects the contemporary trend to slice all information up into pre-digested 30-second sound bites.” It’s a shame, then, that Lyons slices up his information and presents it in a slightly different form of pre-digested material. 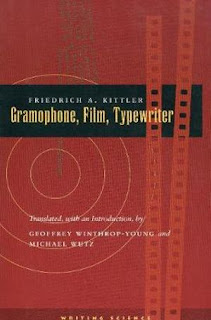 Things get truly worrying when one reads that Lyons has relied “on well-known authorities [my italics] like [Bruce] Bliven and [Darren] Wershler-Henry”. The books by Bliven (The Wonderful Writing Machine, 1954) and Wershler-Henry (The Iron Whim: A Fragmented History of Typewriting, 2007) have been shown here to be quite inaccurate, at least in many parts. And certainly Bliven’s book, written under contract to the Royal Typewriter Company and heavily biased toward one manufacturer, was very poorly researched. “Well-known authorities”? I think not. Lyons’s other sources include Will Beeching and Michael Adler, but only Adler’s earlier, 1973 work.  There’s a lot of Friedrich Kittler in there, too. I don’t know so much about Kittler’s 1986 Gramophone, Film, Typewriter, but personally I've come to learn not to entirely rely on Beeching or Adler.

Lyons’s “pre-history” ignores Burt among many others. He has Pratt moving to England in 1864, after the Confederacy had lost the Civil War. He has Remington adopting or stealing Ravizza’s ideas, when Richard N. Current makes it perfectly clear in The Typewriter and the Men Who Made It (1954) that Latham Sholes and James Densmore were completely oblivious to any previous attempts to build a typewriter, certainly until Sholes was made aware of the Pratt machine. Yet other sections on the early development of the typewriter come directly, in huge slices, from Current. Because of this reliance, the Sholes & Glidden being exhibited in Chicago in 1873 is completely overlooked. 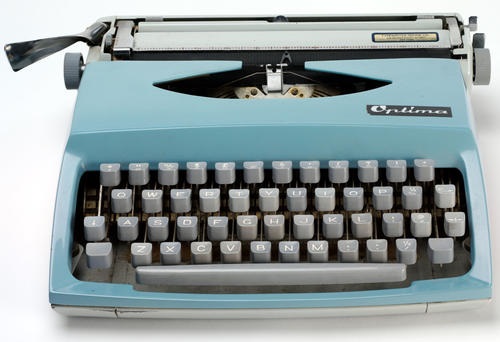 Lyons dates the Blickensderfer to 1890, way ahead of when it actually reached the market, and he thinks that in 1909 the electric typewriter “lay well into the future”. He believes female speed typists “soon demonstrated their superiority” when in fact men won every world speed typewriting championship from 1918 to 1938, 19 on end! He thinks Frank McGurrin’s choice of a QWERTY keyboard was “just an accident”. And that Turing was a “star performer” with the computer. He doesn’t seem to realise that Hemingway was far from alone in terming a typewriter “a mill”. Hemingway’s suitcase of manuscripts wasn’t stolen in Paris in 1923, it was lost. Lyons says, “ … the first visible-page typewriter was designed by Underwood in 1897”. He thinks when reading “blind” typing, one had to lift a “cover”, and that Cormac McCarthy could have bought a Lettera 32 in the US in 1963. Like the Mitchell Library in Sydney, he identifies Patrick White’s Optima as an Olivetti (I note the library has finally admitted its mistake). He has George Yöst supervising the typing of a letter from a dead man after Yöst himself had died. Blickensderfer didn’t close down in 1919, nor was it “later taken over by Remington”. The Olivers “made” in England until 1959 were very, very different to the ones made in America, and they weren’t made in England anyway. Imperial was “defeated” way before 1974. This silliness about typewriter history just goes on and on. 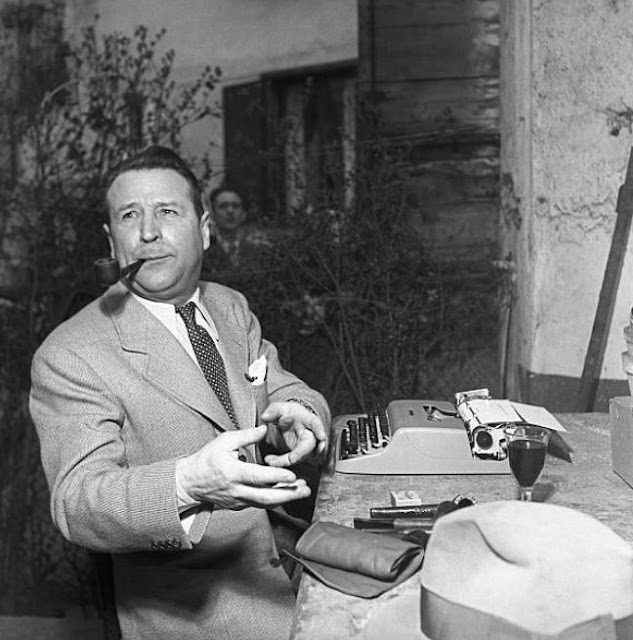 When Lyons leaves his botched typewriter background behind and gets into the meat of his matter, he starts to make good points. “ … many literary critics [suffer] from typewriter blindness”, for example. Lyons is at his best when he regurgitates and reassembles passages already written and published elsewhere, about the way in which authors approach their writing with typewriters. This is interesting stuff, but it’s hardly original. What’s more, an awful lot of misinformation about typewriters has gone into print and online in the past 120 years, and what Lyons has done here is indiscriminately assemble and publish it without first checking the veracity of so many vital details. Susan Lever, in today’s review, says the book is based on “wide archival research”. This doesn’t mean the material used is entirely factual, merely that it has been plucked and published to suit a purpose. The purpose is well met, I just wish Lyons had left the history part to the real experts.
Posted by Robert Messenger at 19:41

You are, as I keep telling people, a rare, 24 karat, genuine, un-biased, INVESTIGATIVE JOURNALIST!

Simple, logical, and very hard work. The defining point is the desire to assemble an honest, accurate story of real events with the most verifiable facts available.

He's a history professor, he has to be right. Just a bit of sarcasm from an imaginary person in the imaginary Typosphere.

Many thanks for again trying to keep the record straight. It is sad that so many readers will be taken in by the idea that a professor emeritus is a reliable source. Some old wine is excellent and some is undrinkable and should be avoided at all costs.

I'm reminded of this nearly every time I visit your blog. Though I'm always very humbled by your knowledge and your writing both, oz.Typewriter always remains an enjoyable place for me to and visit and learn something new. One of the few things that I can always count on these days. Thanks as always Robert!

Yet another writer who has severely underestimated the complexity and unreliability of older information about typewriters. You'd think a historian would know better.

Thanks Robert for the honest review of this book. This served the purpose for which it was intended, to inform me as to whether or not I would be interested in purchasing and reading it. I am not, and will not be. Too bad though, the cover looked good!

Hi Robert.
Apologies, this isn't related to the current post, however I see in one of your previous posts that you wrote a history of the New Zealand Typewriter Company back in 2010. I'm wondering if there's any way I can get my hands on a copy of that?
The reason I ask is that I've just recently bought a Royal Model 10, serial number X922339 (1925 I think) and am trying to put together a history of it. It is affixed with a plaque(?) from the NZ Typewriter Company, 22 Water Street, Dunedin.
Forgive my newby questions. This is my first typewriter. I somehow doubt it will be my last.
Warm regards, Brandi

Brandi, if you use the search facility on this blog and search for Alf Reed you will find many posts about the NZTC. I would recommend you have a look at my article about Reed and the NZTC in 'ETCetera' (Early Typewriter Collectors' Association) magazine issue of December 2010 at https://etconline.org/backissues/ETC092.pdf

Thank you Robert - you're an absolute gem and your blog a treasure trove.