The Oakland Oracle and his Ode to the Haka 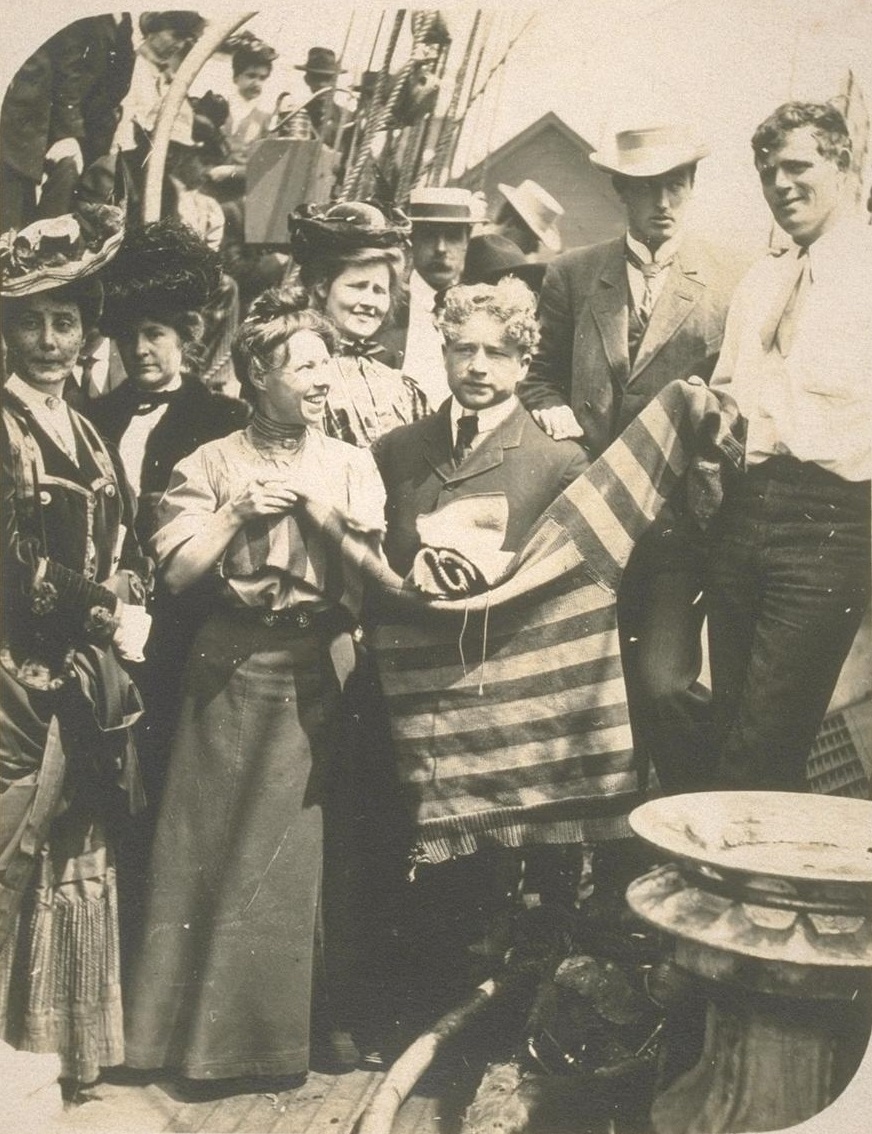 "Jimmie" Hopper, centre, presents a University of California, Berkeley, football jersey to fellow Oakland author Jack London, right, on London's 45-foot sailboat, The Snark, before she headed off for Hawaii in April 1907. On Hopper's left is London's wife Charmian Kittredge London. Also in the crew at that time was a then 20-year-old "ship's engineer" Herbert Rowell "Stubby" Stolz, who in 1913 played rugby union for the United States against the All Blacks at California Field, Berkeley. New Zealand won 51-3. For more on Stolz, see ozTypewriter blog post of September 5, 2015 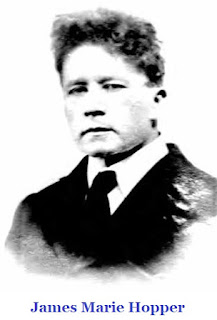 Oakland journalist and writer James Marie "Jimmie" Hopper was the lead "beat" reporter on The San Francisco Call when, in mid-February 1906, a couple of prime assignments came his way. Not alone did The Call justifiably rate very highly Jimmie's ability to capture in words the city's most historic events in his own unique style - for ample evidence, see Jimmie's famous coverage of the April 18, 1906 earthquake. The Call also knew Jimmie knew football, inside out. The Call grasped the matches it was sending Jimmie and his Blickensderfer typewriter out to cover in February 1906 weren't just any old football matches. They were quite special. California's two major universities, Stanford and UC Berkeley, had only two months earlier - on December 11, 1905 - decided to abandon American football as being too violent, and to take up rugby union instead. Trouble was, hardly anyone in California knew the slightest thing about playing rugby. Some did know, however, that the all-conquering New Zealand All Blacks had been touring Britain, Ireland and France. A few of this small group thought it possible the New Zealanders might be enticed to travel home through the United States, rather than more directly through the Suez Canal. One of them had sufficient sway to write to New Zealand Premier 'King" Dick Seddon and persuade him to offer government money to bring the All Blacks back through New York and California. But since Californians hadn't even started playing rugby by mid-February 1906, British Columbia bravely stepped forward and offered to voyage south to take on the New Zealanders on American soil.

Jimmie Hopper, circled, in the 1898 University if California football team. 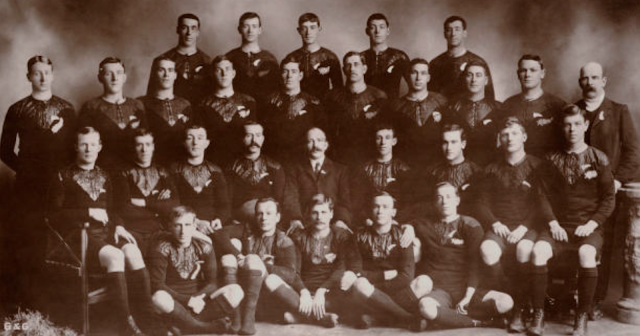 The 1905-06 All Blacks, who won 34 of 35 matches and scored 976 points to 59.
So it was that French-born Jimmie Hopper and his little typewriter went out to the University of California campus at Berkeley to write about a rugby union match on Saturday, February 10, 1906. OK, it wasn't a match involving any Californian teams - the "Big Game" between UC and Stanford wasn't first played under rugby rules until November 10, 1906. It was the first of two matches between the All Blacks and British Columbia to be played within three days, each match specifically staged to both convert Americans to rugby and to show them how the original version of football was played. Jimmie Hooper covered the two matches, the second at the Recreation Park, San Francisco. 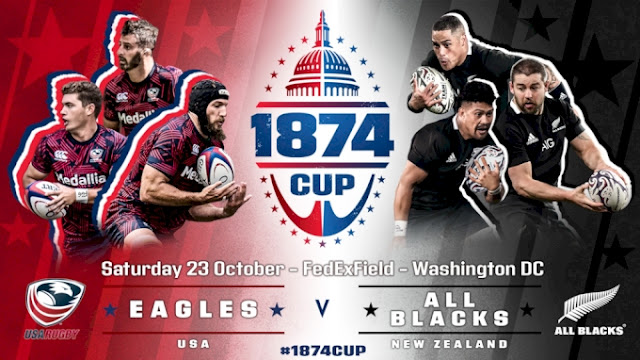 And now, 115 years and eight months later, the New Zealand All Blacks – comfortably the world’s most successful sporting team ever, with an 85.8 per cent win ratio from 1332 matches since 1884 – will play the United States Eagles in an international at FedEx Field in Washington DC. And we might safely assume that tomorrow's Test will be avidly watched by President Joe Biden, who with his brother Jim played rugby for the Delaware club (formed 1972) and at Syracuse University.
POSTSCRIPT: New Zealand beat the United States 104-14 on October 23, 2021. The two tries scored by the Eagles were the first the US had ever scored against the All Blacks, in five matches dating back to 1913. 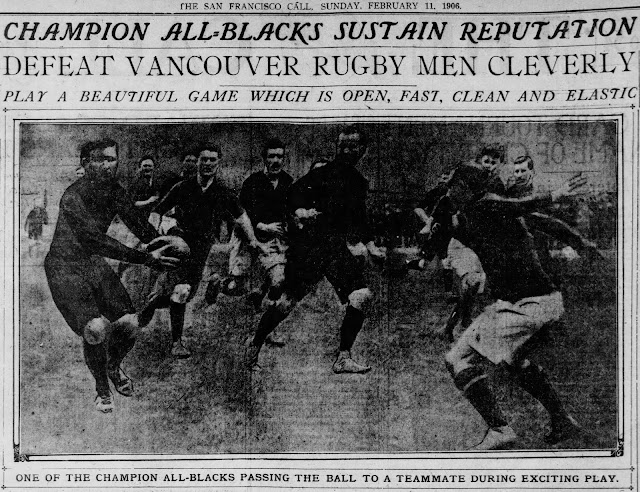 Headlines and photo with appeared in the Sunday edition of The Call
above Jimmie Hopper's match report.

But getting back to the first time the All Blacks played an official match in the US, at Berkeley, on Saturday, February 10, 1906. Jimmie Hopper watched in awe as New Zealand swamped the Canadians 43-6. He went back to Newspaper Row with these words typed on his Blick: 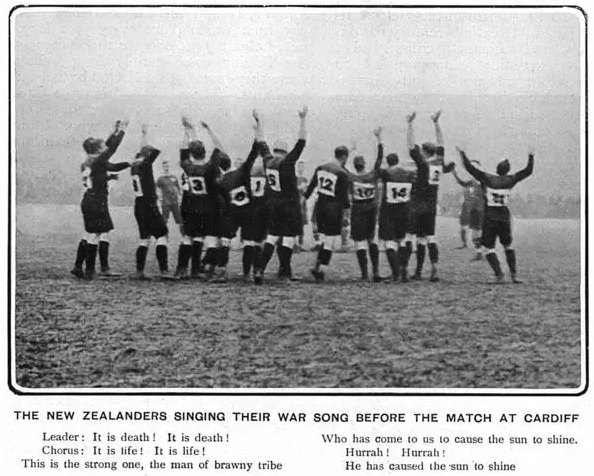 With this yell, in days that are past, the Maori warriors, up in their volcanic fastnesses of New Zealand, used to work themselves up to frenzied fighting pitch before rolling down, like seething lava, upon the British invaders of their lands. Centuries ago, perhaps, some gentle poet, who liked to see others fight, composed this rhythmic collection of syllables that make men mad. He was of those who build better (or worse) than they know. He meant merely, in all probability, to procure himself a series of spectacles which he could watch safely from behind convenient rocks, immortalizing them later, as the same time immortalizing himself. As a matter of fact he was doing nothing of the kind. He was merely deciding that in the year 1906 a country called the United States would suddenly reverse its sporting policy, wipe out all of its pigskin lore and bow to a new idol called Rugby football.

I’ll tell you how this happened.

On the Berkeley campus the All-Blacks of New Zealand played a match of Rugby football yesterday for the benefit of collegians lately attacked with moral doubts and scruples as to the ethical beauty of their own game. They presented, first of all, fifteen athletes, broad of shoulder, lean of loin, powerful as rhinoceroses and fleet as kangaroos, the mere sight of whom won distinct approbation. Then, when these athletes got started, they showed a game beautiful in its darting speed and kaleidoscopic variety of action. All this would have been insufficient to overthrow the old tried and beloved god, intercollegiate football, had it not been for our old Maori fight-loving bard.

For, before they started flashing through their Vancouver opponents, these All-Black New Zealanders stood in the center of the field, silent for a moment as with some tense, religious fervor. At a word of their captain, they massed close, their fists rose to heaven and began to brandish imaginary war clubs, their feet began to paw the ground with metrical beat, their fifteen mouths opened and then it came, raucously rhythmic:

Through the men packing the bleachers – the kind, you know, who yell owsky-wow-wow and weesky-wee-wee and ha-ha-ha and rah-rah-rah and give-’em-the-ax and whatsdematter-widsoandso – there ran a thrill of tenderness, then of delight, then of enthusiastic admiration. Never had they heard such a yell, never seen such brandishing of arms, such stamping of feet; never had the ingenuity of their yell leaders risen to such ecstatic results. Immediately they were conquered. Their eyes ran tears of maudlin tenderness. They shouted, they laughed, they wept, they hugged each other. Afterward whatever those cunning All-Blacks did was the thing to do; whatever game they played was the game to play. Next year we’ll be calling “touchdowns” “tries.” A “line” will be a “scrum”; we’ll weigh not “pounds” but “stones”; we’ll tackle by ears and noses; our cavorting legs will be indecently bare; quarterbacks will be further sliced into “three-quarter-backs” and “five-eighths-backs,” and before starting to wade through the “red shirts” or the “convict stripes” we’ll shake our fists and stamp our feet and yell:

That’s what this old rascal of a Maori poet had done for us.

Well, the game is a truly beautiful one – open, fast, clean and elastic. It’s really a game, not a struggle, not a battle, not an attempted massacre.

The photo which appeared in The Call above Jimmie Hopper's report of the second match.
And so Jimmie's report went on. Hopper went back for more on the Tuesday, to see the All Blacks beat British Columbia 65-6. His report in The Call opened: “The New Zealanders gave another exhibition of their wonderful football yesterday afternoon … Seventeen times, like a squadron of black hussars, they swept through the Vancouver men …” 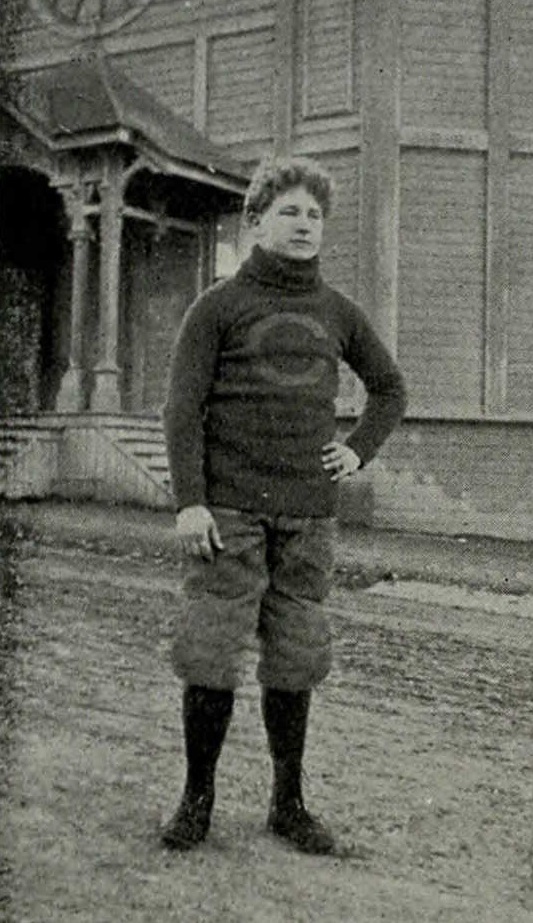 James Marie Hopper, the son of an Irishman and a French woman, was born in Paris on July 23, 1876. He went to Oakland with his mother, Victoire Blanche Eudoxie Lefebvre, when his father died in 1888. After graduating from the University of California in 1898, he attended Hastings Law School and passed the state bar examination but never practised. Instead he concentrated on football and was a star quarterback on the 1898 UC team. As a colourful and much travelled journalist and writer, Hopper was friends with Jack London, Sinclair Lewis and Upton Sinclair. He lived most of his adult life in a famous writers' enclave at Carmel-by-the-Sea, California, and died there on August 28, 1956, aged 80. 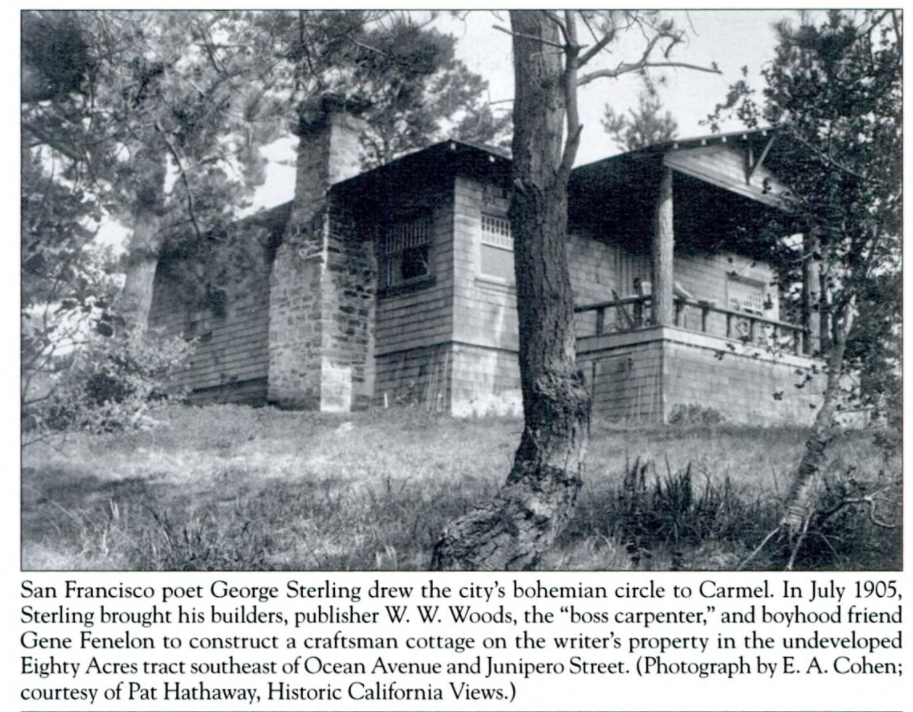 The cottage Hopper bought in 1913. 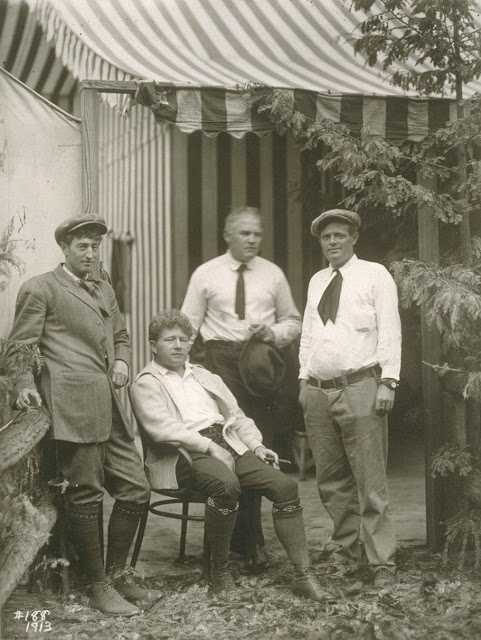 Not terribly relevant to this story, but I stayed in a hotel in Oakland's Jack London Square this summer. He is remembered well!