The Hunt For Emma Mills: The Joys and Frustrations of Typewriter History Research 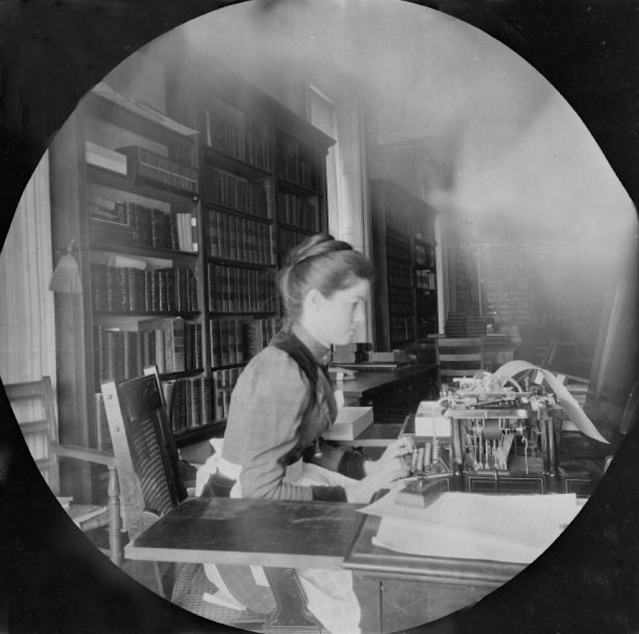 The work of a typewriter historian is never ending. And that’s exactly how it should be. It is, indeed, exceedingly rewarding, and long shall it continue to be so, at least for me. The history of everything evolves, and not just in the interpretation of it, but as fresh information is uncovered or otherwise emerges. In the case of typewriters, as it evolves the more delight it brings, and the more positive feedback there is to this blog.

I started down the then darkish tunnel of typewriter history more than 14 years ago, when, after my first visit to the Powerhouse Museum at Ultimo in Sydney, in July 2007, I found that nothing was known about the introduction of typewriters to Australia. Back then I was a still relatively energetic 59-year-old, with sufficient free time on my hands. But research resources were comparatively limited. Now I’m an old age pensioner who tires easily, especially when a new research project takes days of trawling through multiple online avenues. Still, we continue to be locked down in the midst of a pandemic, it’s a springtime of mixed climate and fortunes, and typewriter history research is one of the four or five things that bring me the greatest pleasure and satisfaction. (Sorry, Typospherians, but caring for my wonderful wife, my grandchildren, and watching the All Blacks play rugby are also at the top of the list.) 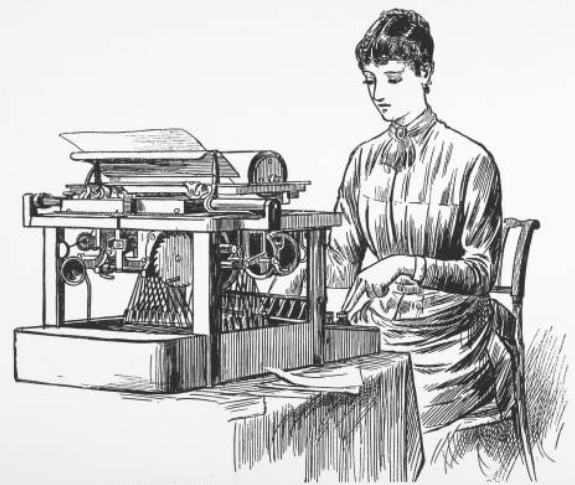 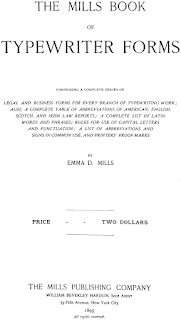 Yesterday, while looking online for something else entirely, I came across a story I posted on this blog almost 6½ years ago. It concerned a student’s PowerPoint presentation in which she declared that “Emma D. Mills invented the typewriter”. I knew, of course, that this was far from the case, but at the time I posted on Emma I was intrigued by what may have led to the claim, and also to find out who Emma D. Mills was. It turned out she was said to have invented a (still) mysterious item related to the typewriter (an attachment is the closest we can get, but no patent has yet been found) and that almost nothing was known about Emma Mills’s life. I’m sorry to say that after a renewed, 48-hour bout of Emma Mills searching, all I can show for my efforts is that the “D” stood for “DeVine” – she was Emma DeVine Mills. This tiny morsel came from a February 1919 record of her renewal of the copyright on her 1895 work, The Mills Book of Typewriting Forms, published by her own company (it was first copyrighted in March 1891). But finding this much at least ruled out many of the other theories about her (not mine, I hasten to add), such as that she was Emma DeLong Mills, the philanthropist and activist, Emma Douglas Mills, Emma De Losse Mills (E. Deloss Mills was actually a man), or Emma Mills the socialite. DeVine may well have been Emma D. Mills’s maiden name, but that still can’t be confirmed. 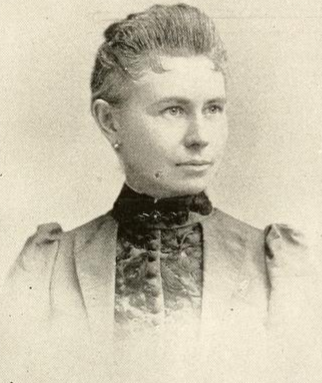 I would love to know a lot more about Emma DeVine Mills. In searching for her, however, I did find out things about many other female typist-stenographers from the last quarter of the 19th Century, pioneers like Mary Foot Seymour (above), the Associated Press telegraphist Ella Maynard Kelley and especially Mary Ann Rotton Saunders (née Percy), who had a long-term close working relationship with George Yöst and once was in charge of selling Yöst typewriters in England. I hadn’t previously encountered these fascinating women.

But let’s get back to Mills. Her typewriter-related business was first publicised in December 1887, when it was stated that he moved to Manhattan Island from Boston in 1885. A newspaper item said, “New York women who have to make their own living may not know what an intelligent, alert spokeswoman they have in Mrs Emma D. Mills. She is a small, active widow [who] is now proprietress of three large writing establishments from which she derives a handsome income, one in Windsor, one in the St James Hotel and the third on lower Broadway. [These branches were later extended to Long Branch and Saratoga.] Mrs Mills’ gray eyes flash with the vigor of youth, but she is old in experience. She began with $50 capital. She stays at the Windsor till 11, at the St James until 1, and at the Broadway office until 5. At each she employs an operating girl, and her income runs up handsomely.” The article goes on to claim that “Forty women are proprietors in New York of typewriting establishments; 2000 women are in the business, and yet the first public typewriter was started just 13 years ago [1874, the year the Sholes & Glidden was launched on the market].” 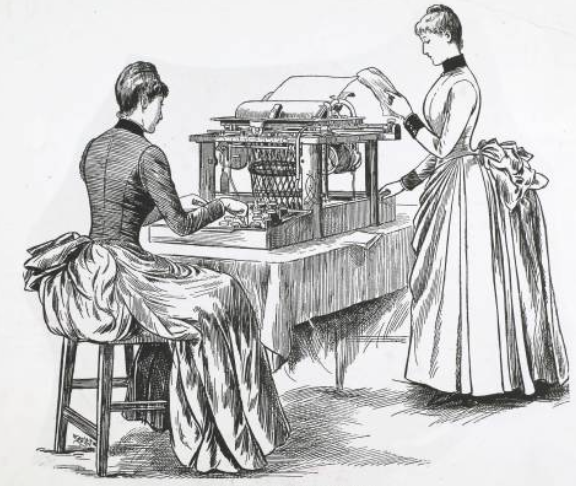 Stories about Emma’s typewriter “invention” emerged in print the next year, 1888, when she was described as “one of the most energetic advocates in New York of the introduction of women into occupations hitherto monopolized by men”. Her attachment was “on the order of the governor of an engine and stops all action of the machinery”. This was intended “to prevent [the typewriter] being used or interfered with during the absence of the operator”.

A newspaper article by renowned journalist Eliza Putnam Heaton in February 1888 said Emma and Mary Foot Seymour were “stenographers and typewriters whose incomes are in the thousands. There is one at least of the women stenographers in Brooklyn whose figures reach fully $3000.” That year’s New York City Directory placed Emma’s business at 120 Broadway and her home at 236 Fifth Avenue. Heaton’s story also mentioned Emma Bijotal, who was the typist for Joe Howard Jr, a leading reporter for The New York Times, city editor of the Brooklyn Eagle and long-time president of the New York Press Club (Howard in 1886 wrote an item about a George Spaulding song, Beauty Dream, which was dedicated to Bijotal), and two young women called Buttner (Jennie and Tillie, perhaps) who worked for the New York State Democratic Committee. 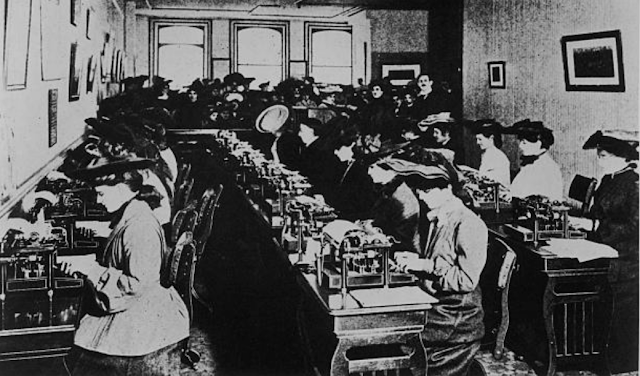 In March 1890 Emma Mills was described “the mother of typewriting as a profession”, a claim to which Mae E. Orr might have justifiably objected. Still, the fact that we still know so little about Mills’s life remains a blight on typewriter history. She was evasive – she was first called Mrs Mills, a widow, and yet later Miss Mills. Her year of birth varied from 1857 to 1859. Her mother was sometimes English born, sometimes not. Whatever the truth, the mere fact of her being female, and presumably taking a husband’s surname, makes tracking her movements frustratingly difficult, if not impossible. 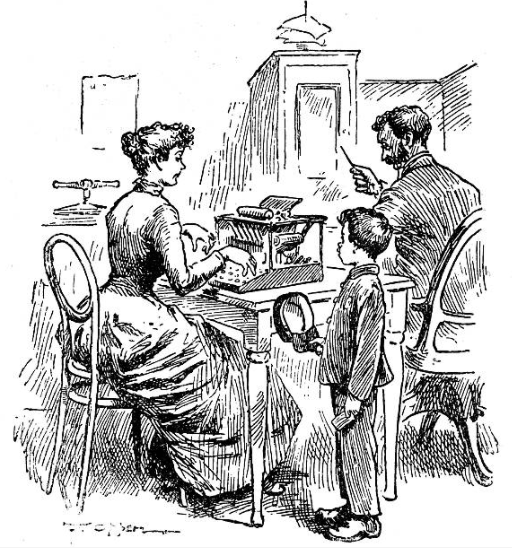 Mills was certainly not alone in furthering the cause of the typewriter in New York City in the 1880s. Others are mentioned in such works as American Women: Fifteen Hundred Biographies with Over 1,400 Portraits: A Comprehensive Encyclopedia of the Lives and Achievements of American Women During the Nineteenth Century, but Mills wasn’t. Seymour, on the other hand, received fulsome tributes, and rightly so. In 1870 she started the first women's secretarial school in New York City, an establishment which later became the Union Stenographic and Typewriting Association, and also handled a large proportion of the writing done for the United States Patent and Trademark Office. Though Seymour preferred journalistic work, she carried on her stenographic business, as it paid better than correspondence or reporting. She was a member of the Woman's Press Club of New York City. 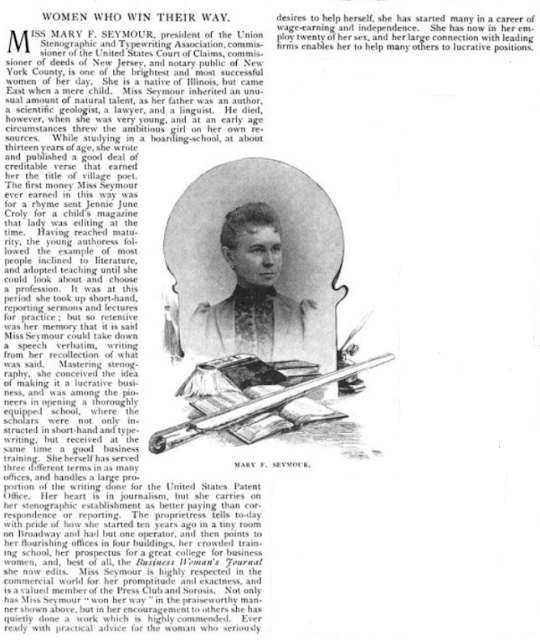 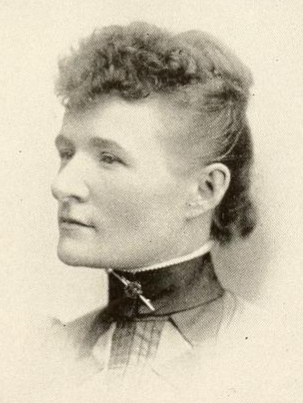 Ella Maynard Kelley (above, 1859-1939) was the first woman to use a typewriter in the telegraphic service,  starting in 1874 in Oak Harbor, Ohio. Her career took her to working for Western Union and in taking charge of the first wire from Associated Press in 1889. Mary Ann Rotton Saunders (below, née Percy, 1849-1925) met George Yöst in New York and quickly achieved 60 words a minute on the Sholes & Glidden to qualify as an exhibitor and salesperson for the first typewriter. In January 1875 she joined the James Densmore-Yöst run Typewriter Company and was one of the first three professional typists. She later became a general agent for the typewriter in St Louis, Cincinnati, Chicago, Indianapolis and Detroit, and in  1891 was appointed by the Yöst Typewriter Company to manage its London office. She returned to a similar position in New York. 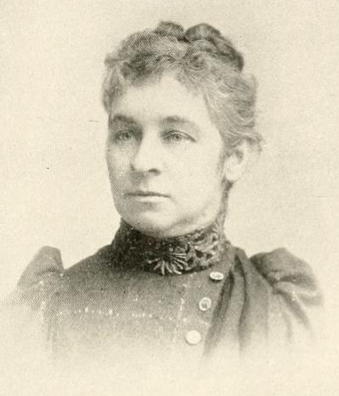 It's good that we find more about such women, and their achievements in the typewriter industry, if only on a forlorn quest to track down the still mysterious Mrs Emma DeVine Mills. But you never know – so many descendants of typewriter people have contacted me because family members have been mentioned on this blog that one day Mrs Mills might be finally revealed to us all, in full.

Posted by Robert Messenger at 21:44

Intriguing. I am curious about those drawings showing absolutely massive Remingtons, about twice the normal size. Had the artist never seen a typewriter in person?

We are all indebted to you for your thorough and detailed research! (: