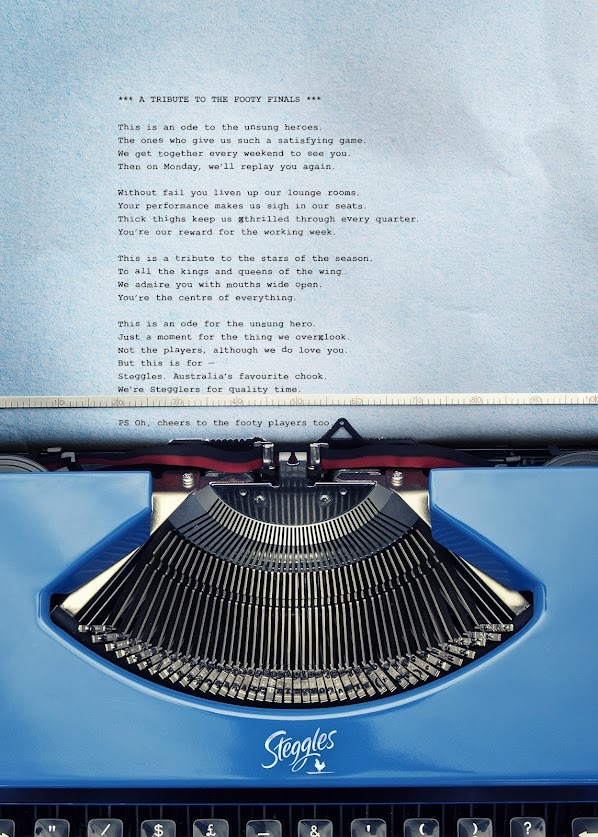 My daughter-in-law Emily had me going a couple of weeks ago when she sent me an image of a "Steggles typewriter". She'd taken a photo with her phone from a newspaper ad and at first glance I actually thought it was a portable typewriter called a Steggles (I did suspect straight away a relabelled Silver-Seiko). Steggles was a typewriter brand name I hadn't previously heard of, but relabelling Japanese typewriters was far from uncommon in Australia. Nakajima and Silver-Seiko portables fully assembled in Japan were once rebranded here in a range of names, from Craftamatic to KMart,  Majitouch and Pinnock. Maybe Steggles was one that had somehow ducked under my radar. Had I known about the Steggles company, or looked more closely at the logo under the brand name, or actually read the typescript, I might have twigged earlier. After all, Steggles have been flogging chicken and turkey products in Australia since 1919. They apparently supply McDonald's, KFC, Pizza Hut, Red Rooster and Subway, but I don't touch that stuff and I swear I was completely unaware of Steggles.

The Steggles typewriter ad was part of an "Unsung Heroes" campaign which coincided with Father's Day and the Australian football finals (the wording of the advert seems to be directed at the code only played in Australia and which is played in quarters, not halves. There were rugby union internationals and rugby league finals going on at the same time). M&C Saatchi put the ad campaign together under executive creative directors Mandie van der Merwe and Avish Gordhan and the copywriter was Jason Leigh.

Posted by Robert Messenger at 14:33

If I had seen a machine with such labeling, I would have been very confused by the chicken silhouette. :D