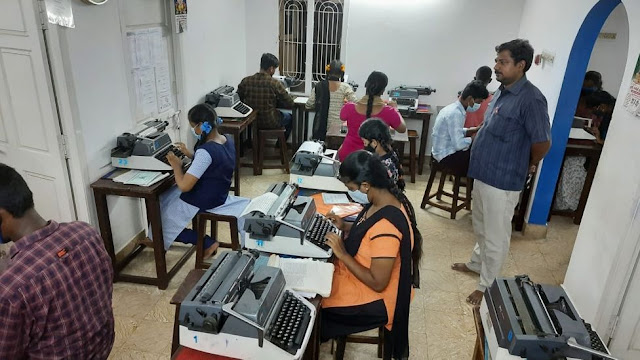 The British Broadcasting Corporation has been running a series of online features in its “Future” section, stating, “We believe in truth, facts and science. We take the time to think. And we don't accept - we ask why. In a complex, fast-paced world of soundbites, knee-jerk opinions and information overload, BBC Future provides something different: a home for slowing down, delving deep and shifting perspectives. You’ll find stories here on almost every topic that matters. Psychology. Food. Climate change. Health. Social trends. Technology. What links them all is our approach. Through evidence-based analysis, original thinking and powerful storytelling, we shine a light on the hidden ways that the world is changing – and provide solutions for how to navigate it. Energised by the everyday, we think no topic is too small to be fascinating. Inspired by obstacles, we believe no subject is too overwhelming to tackle.” 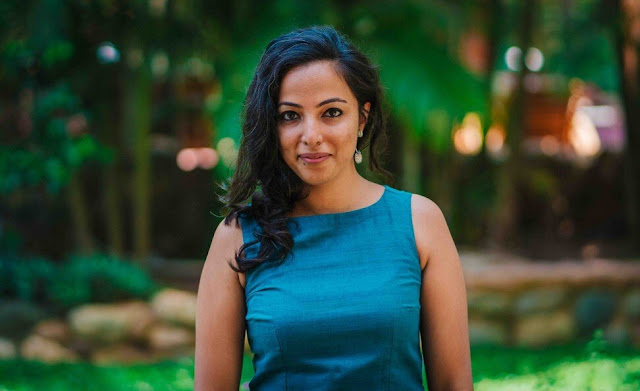 Last week it was the turn of typewriters, and I thank Victorian typewriter technician Michael Klein for alerting me to it. Madurai-based writer and freelance journalist Kamala Thiagarajan (above) wrote a lengthy piece under the headline “Hidden Value: India’s nostalgic passion for old typewriters.” She began, “For some Indian enthusiasts, vintage typewriters aren't outdated pieces of machinery – they're practical and cherished possessions. In a small room, painted a light shade of pastel pink, nearly a dozen men and women are hard at work, hunched over desks that line the walls, their fingers flying at a frenzied pace over clattering keys. The soothing rhythm of typing punctuates the incessant drone of traffic. For the last six years, in the heart of one of the busiest streets in the Southern Indian town of Madurai, Dhanalakshmi Bhaskaran has been teaching typing skills in shifts to hundreds of students every day, running an institute powered entirely by 20 manual typewriters. The Umapathi Typewriting Institute, named after her son, can teach you typing in three languages – English, Hindi and the local language of Tamil. The typewriter they use, a model called Facit, is more or less unchanged since it was launched in the late 1950s. Bhaskaran's students come from all walks of life, she says. Some are still in high school, intent on learning typing to give themselves an edge in a competitive job market. Others are professionals vying to secure jobs in government-run offices. There are a few young mothers too, drawn to her classes with the hope of re-starting their careers after having children.”

The full feature can be found here https://www.bbc.com/future/article/20210928-indias-nostalgic-passion-for-old-typewriters 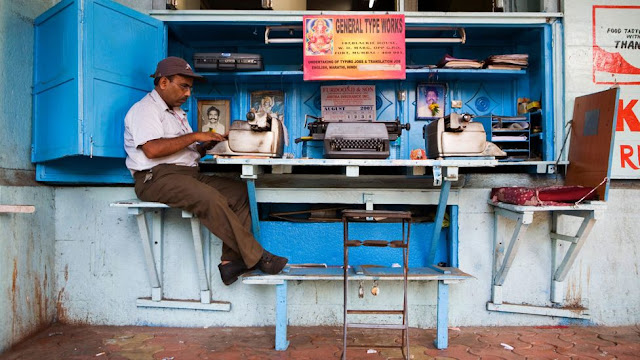 Thiagarajan asks, “in a world where mechanical technologies have long been superseded by digital ones, and where laptops, computers and even tablets are now more affordable than ever, why would anyone invest in their typewriting skills?” “For job seekers who don't have access to laptops or personal computers at home, learning typing on a manual typewriter can be a lifeline, says Bhaskaran. ‘Once you've trained on this machine, you can really improve your typing speed and avoid mistakes. And it's easy to transfer those skills to the computer,’ she says. A typewriter's portability is practical and prized, too. After lockdown restrictions eased, students could socially distance as they typed, something that may not have been possible had they been instructing people on larger computer systems, says Bhaskaran.”

Thiagarajan goes on to point out that in 2009, Godrej & Boyce, one of the last Indian companies to manufacture typewriters, decided to stop production. “At the time, many predicted that the manual typewriter, which once held pride of place in India's homes and offices, would finally grow obsolete – a dinosaur consumed by digital technology. And yet, a decade later, in the winding alleyways of India's small towns and even in the heart of its larger cities, the manual typewriter still thrives.” 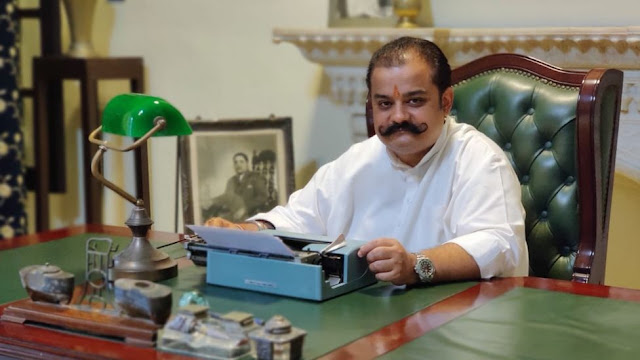 Thiagarajan interviewed Rajesh Palta, owner of Universal Typewriters Co, who has been refurbishing and selling typewriters from his store in New Delhi's Kamla market since 1954. His family business was  featured in a book that chronicled the journey of the typewriter in India: With Great Truth and Regard: A Story of the Typewriter in India. One of Palta’s clients is  Maharaja Jayendra Pratap Singh, a member of the former royal family of Balrampur in the Northern Indian state of Uttar Pradesh. He has 11 typewriters in his collection – including a couple of Godrej Prima, a[n Olivetti] Lettera 32 and a rare model of Hindi typewriter.

Thiagarajan quotes Murugavel Prakash, who trains 300 students in typing at the Sri Krishna typing institute he runs in Madurantakam, near the Southern Indian city of Chennai: “Certain important government documents are still typewritten because the ink never fades, unlike computerized printouts. Prakas took over the institute started by his uncle in 1954 and has 80 machines, mostly Godrej Prima and Remington 14s. He and his wife offer hourly sessions through the day from 7am to 8pm.” 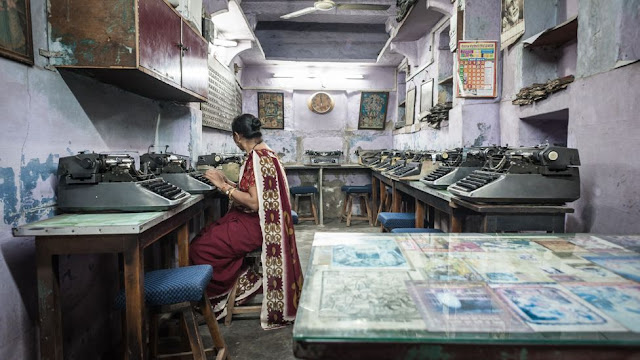 Thiagarajan writes, “One of the most prominent areas where manual typewriters had been employed in the past were outside the country's courtrooms, where legal documents were typed out and often translated into Indian languages. Across the country, an estimated 2000 typists sat outside courts in 2014, their typewriters sheathed in tarpaulins and often left unattended under the shade of big banyan trees. The cities of Kolkata and Delhi are particularly well-known for their court typists. They made it possible for litigants to have instant access to paperwork, particularly handy when there were power outages, which were frequent in the past.” 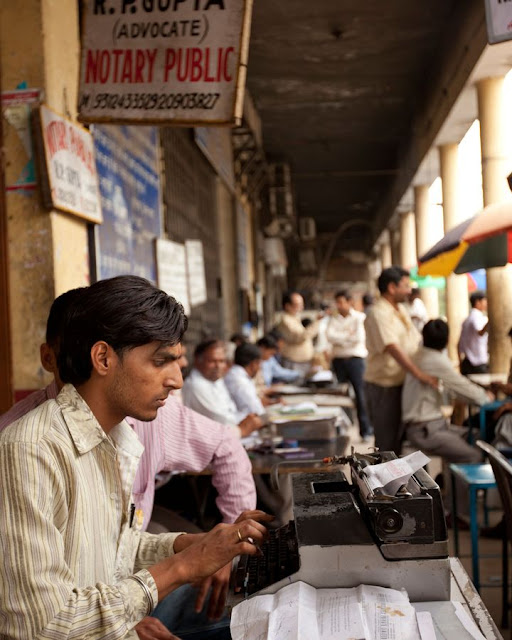 Thiagarajan relates a fascinating tale about the Bhawal Sanyasi court case in Dhakka in 1936, after which Judge Pannalal Bose locked himself away for three months, to deliberate over and type out the 531-page judgement on his Remington Rand portable, which his family has since preserved.

Posted by Robert Messenger at 18:18

I love these photos, and the persistence of typewriters in India is heartwarming.