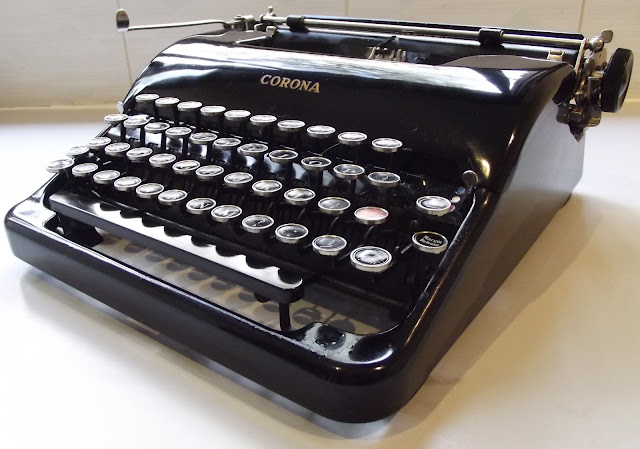 Richard Polt was right when he said there would be a rewarding upside to moving hundreds of typewriters. Inevitably, at least one absolute beauty will emerge from the bottom of the pile.
On the first of five visits to the larger of two storage units in Fyshwick, to clean it out of all typewriters and their cases, just such a thing happened. 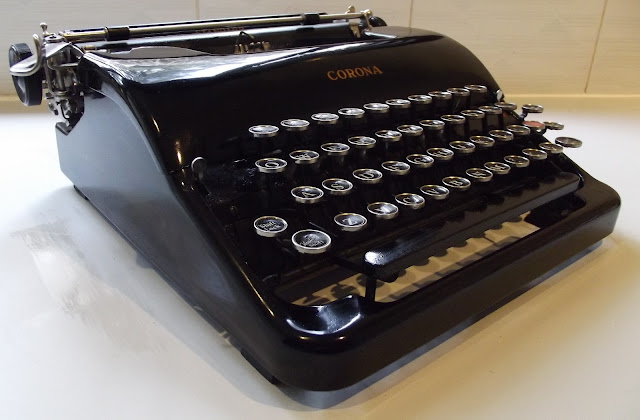 Earlier in the year, I well recall wondering, for one reason or another, whether I had a “Speedline” Smith-Corona in my collection. 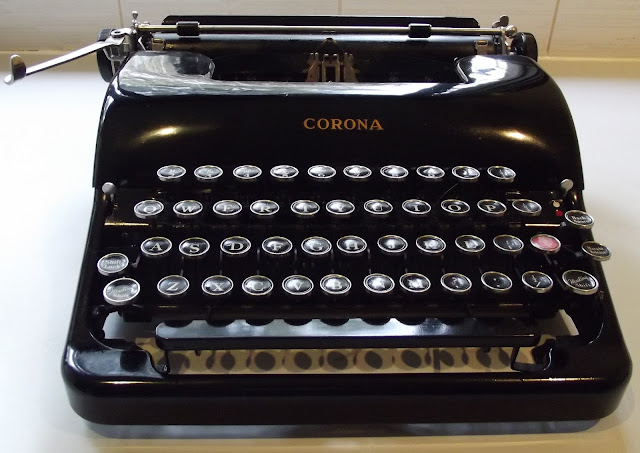 After moving the first 15 or 16 typewriters, there it was, a real black beauty, a 1938 Corona Standard. 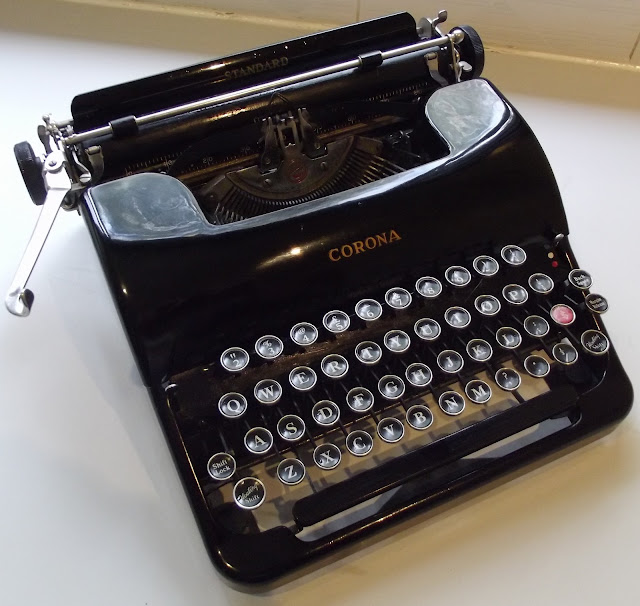 Once I got it home, there was of course an irresistible urge to type with it. I grabbed the first ribbon that came to hand. 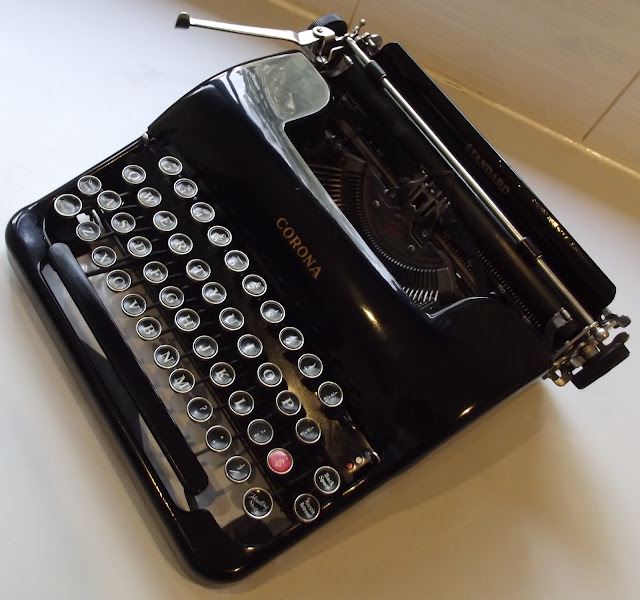 Unfortunately, the day before, someone had given me six pale blue plastic boxes containing “Mastertype black film ribbon” – and I happened to put one of those in the old Corona. Not a good idea. The Corona’s razor sharp typeslugs bit into and spat out pieces of “film ribbon” like ravenous lions. 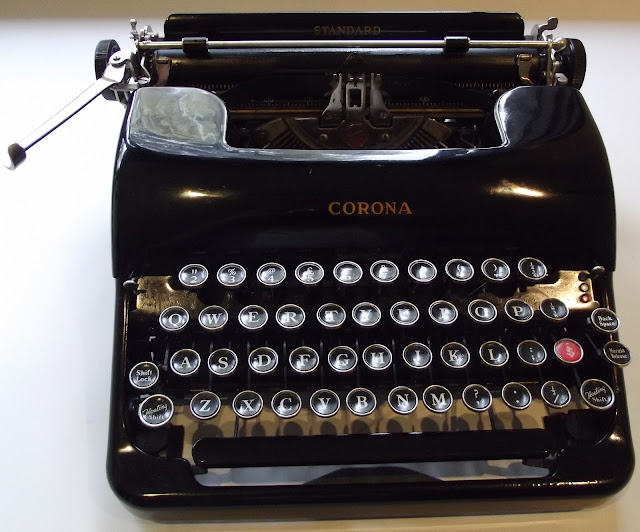 It’s clear from the typecast that bits of ribbon were flying in all directions. Still, I think it scans OK. Regardless of it not being the most suitable ribbon, the Corona typed magnificently.

The L.C.Smith & Corona “Speedline” series, designed by Al Avery, was introduced in 1938. Corona’s conversion of its Syracuse and Groton factories to armaments-making in late 1942 meant typewriters were put on hold. But after the war Corona resumed full production of the "Speedline" series, before it was superseded at the end of 1949 by the 5 Series. 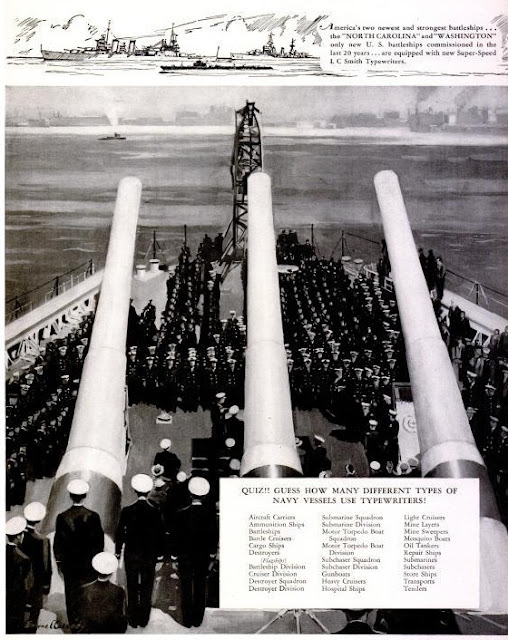 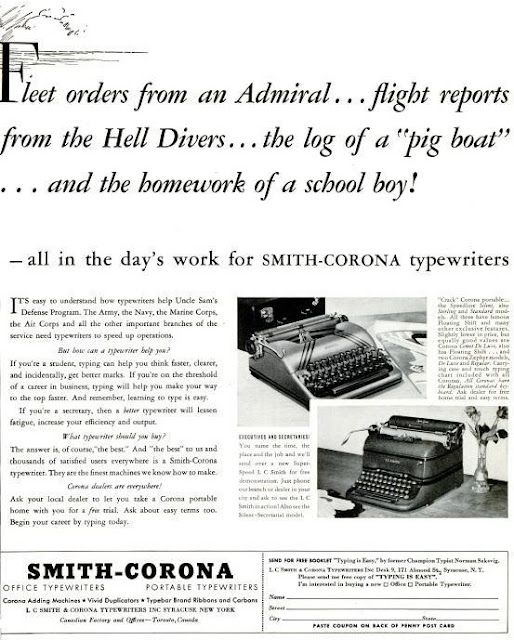 In March 1942 the US Government stopped the sale and delivery of typewriters, and in October of that year production ended. It resumed at Syracuse in February 1944. In the meantime, Corona had many models assembled at its  Canadian “branch plant”. 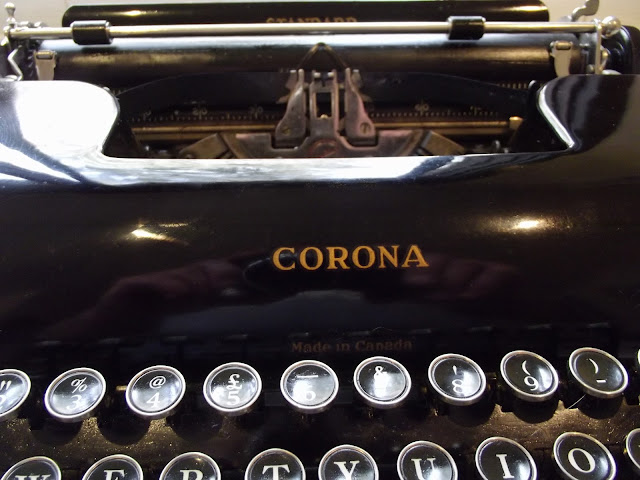 Corona established the “branch plant” in Toronto in 1929, just three years after the merger of L.C.Smith and Corona.
The Toronto plant was initially an assembly point, with parts shipped across the border. The idea was to beat import restrictions in other parts of what was then known as the British Empire, including Australia and New Zealand. In Australia, Remington did the same thing at the same time, starting a "branch plant" in Sydney. 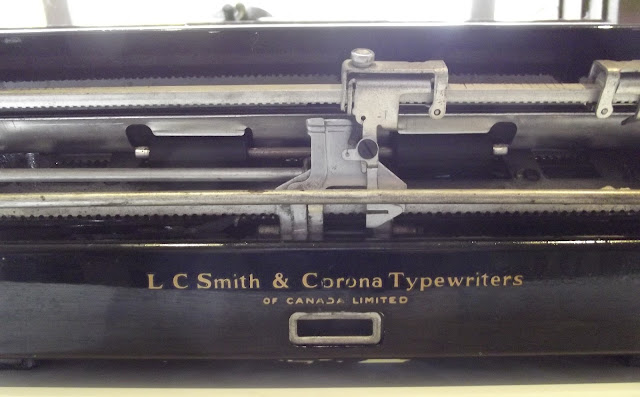 Many Corona portable typewriters continued to be labelled “Made in Canada” until well into the 1950s, before Corona eventually moved production to West Bromwich in England in the early 60s. The Toronto company was known as “L.C.Smith & Corona Typewriters of Canada Limited”. 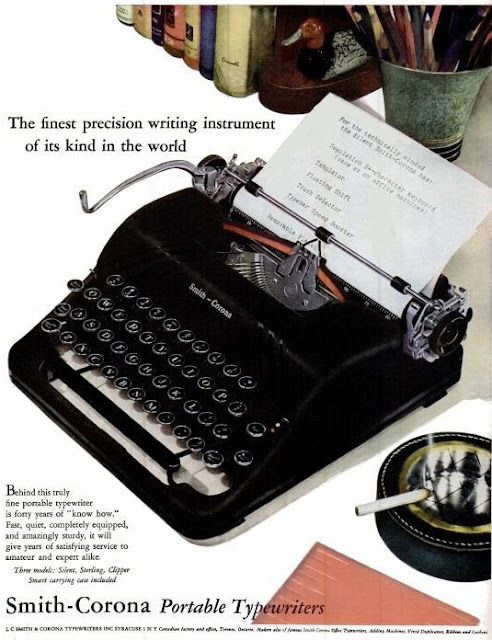 My Corona Standard has the serial number 2C188473, which means it was made in 1938. This was the year A.O.Dawson took over as vice-president of Corona's Canadian operation - he became president in 1952. 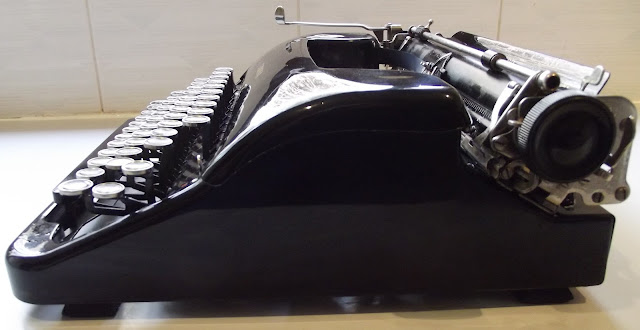 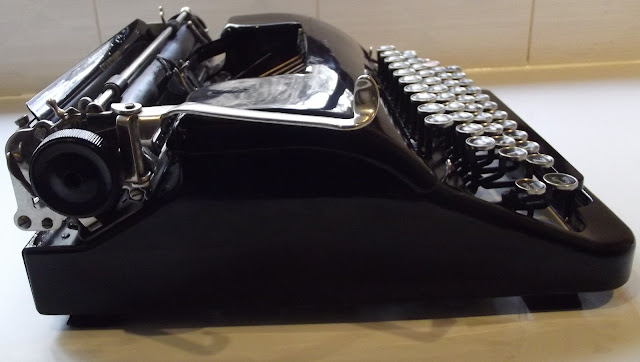 Alan Seaver describes the “Speedline” design as “somewhat belatedly reflecting the futuristic, organic Art Nouveau style that had begun to move from architecture into industrial products in the 1930s.” 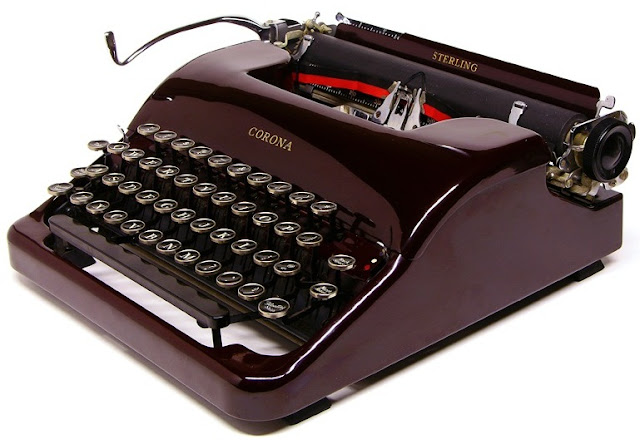 Alan Seaver Collection, 2A40715
Alan says his Speedline Sterling (above) is “one of my favourite typers, both to look at and to use”. 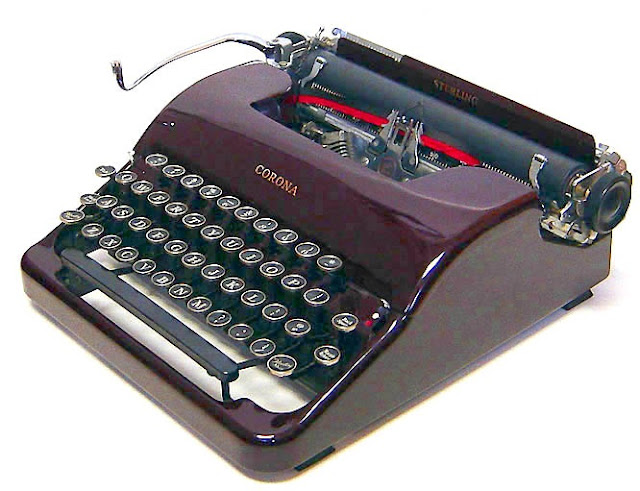 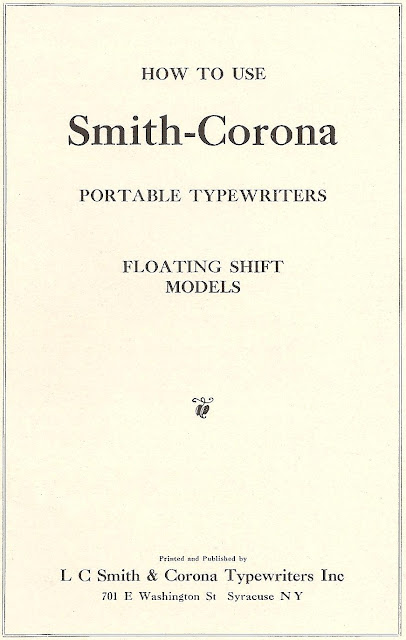 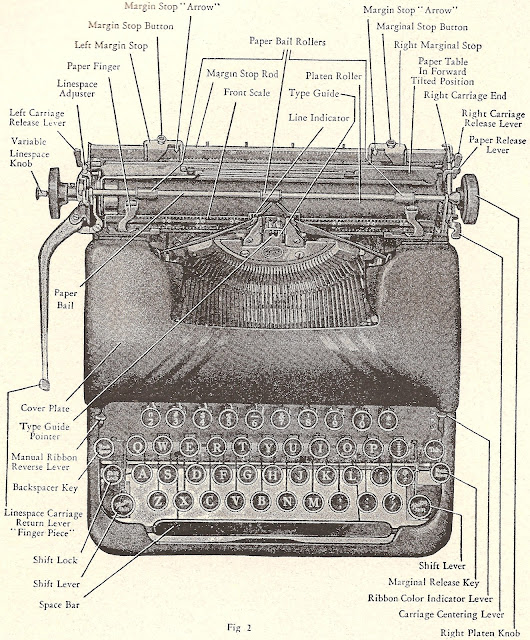 She's been on my Wish List for years now - and in maroon at that! You have (as you know) a fantastic machine there. A great find if ever there was one! Thanks for sharing!!

My circa 1946 Sterling is one of my favourites, both to use and to stare at. That's a great machine you have there, Robert. And the glossy paint-job really sets it off.

The lines of this typewriter are so simple and so beautiful, they are classic. I see that the carriage return lever on yours is straighter than on mine and Alan's, though.

I did not know about the Canadian plant.

This is a beautiful machine. I had seen the one on Alan's site and have admired it from afar. A maroon one showed up in a local antique mall with the case missing (probably moldy) and mechanical issues. There will be others.

I have one waiting to be restored to her former glory. They do have a very nice body. Truly sophisticated typewriters.

Thanks for highlighting one of my favorite machines. It's simple elegant design is a thing of beauty. For years I've preached about it's great touch and feel as much as it's beauty. Thanks!

I just picked up one of these today, and the serial number is very close to yours: 2C188025. It's beautiful like my Remington 7 Noiseless. The seller didn't realize that it was quite easy to reconnect the "stirrup" to the keys -- spread them out and reconnect the little bar. And a couple of little springs. what a great site you have.

I'm a cartoonist, and am looking for Typewriter pictures as reference for a book I'm working on. This looks like a sexy typewriter to draw, and I'm super grateful for all the different angled photos you've taken. Thanks a bunch!

I have quite a few old typewriters including an old Hammond that I cannot figure out. The serial number on my Corona standard, however, is: 2C169893, and is seems to partially resemble the paper bale-less design of the Corona Sterling. Do you have knowledge of a "hybrid?" Danai Lamb

P.S. My Corona Silent has a serial number 1S24998. I do not see it in the S series numbers, but should I assume it is pre-1938? I am new at tracking the histories of my (relatively) few (compared to previous stmt. of "quite a few") typewriters. Thanks in advance for any info.

The green Corona Standard I posted on yesterday has no paper bail and is definitely not a hybrid. Most of these models are like this, though some do have a paper bail. It may have been an optional extra at point of sale. Your standard was made in 1938 and the Silent in 1937.

I believe that I have one of these beautiful maroon Corona Standard Speedline Portable Typewriters - but I'm unable to locate the serial number. Can you please advise on where I might find it? Thank you so much for your time and consideration.

I believe that I have one of these beautiful maroon Corona Standard Speedline Portable Typewriters - but I'm unable to find the serial number. Can you please advise as where to look? Thank you so much for your time and consideration.

I have managed to acquire "in the wild", a Made in Canada 2C Corona Standard, in black, just like the one pictured. It does not have a paper bail, and the platen and feet are rather hard, but it functions wonderfully. It's lines and it's minimal decoration make it lovely to look at.
At $50 Canadian, it was a steal. WooHoo!

I found a Corona Sterling floating shift serial number 3A 74405 with 10 043B on the bottom. It was in the attic. It has the case,key,instructions and a good ribbon. Every moving part works and it seems to be in mint condition. I can't find it listed anywhere. Help?

I am now the proud owner of my mother's Corona Standard.
Where will I find the serial number?

Just made 47 (2 duplicates in a Hermes 3000, one is a parts car) and picked up a maroon Sterling today in MA. Such fine lines and this one is in great shape - despite the seller stating 'brand new' lol. It is in excellent shape and the case has that welcome musty smell of cellar storage. Hunted it down based upon your site and saw a maroon one show up on Offerup, the mobile selling site. Thanks!!!

I believe that I have one of these beautiful maroon Corona Standard Speedline Portable Typewriters - but I'm unable to find the serial number. Can you please advise as where to look? Thank you so much for your time and consideration.
5 January 2014 at 05:28

Did you try looking in the closet?

I have a Smith Corona Silent Typewriter. The serial number is 4S110591. Can you tell me exactly what year it is?

I have a Corona Silent serial number 4S110591. Can you tell me what year it is exactly? It is in pristine shape and came with the case also.