On This Day in Typewriter History: Kaley’s 1883 Daisywheel Typewriter 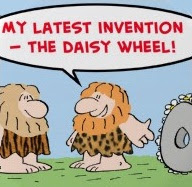 The Reverend Kaley of Carey
and his Daisywheel Typewriter 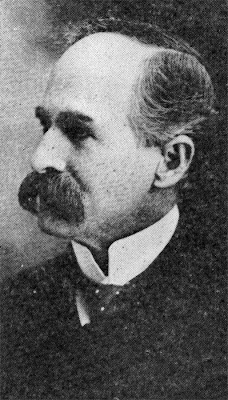 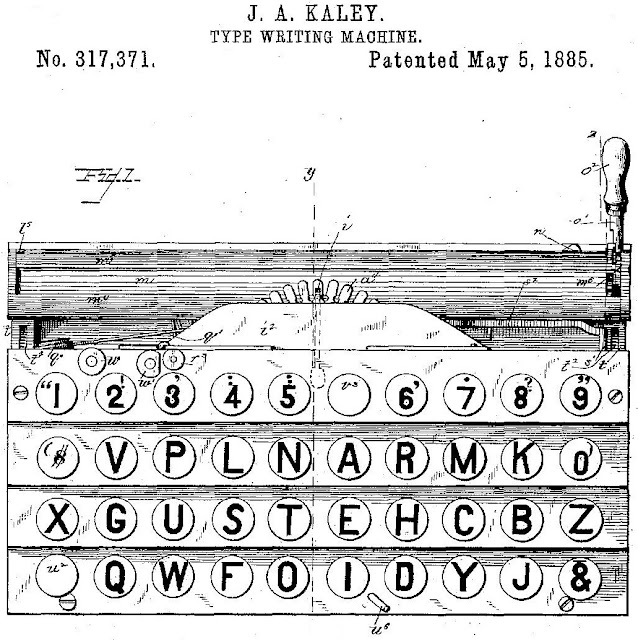 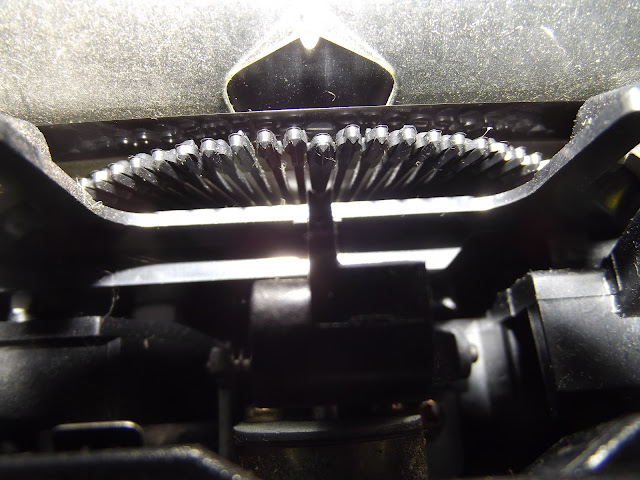 A modern daisywheel typewriter
In his specifications, Kaley described his daisywheel thus:  “The types are arranged upon the outer ends of arms radiating from a common centre, and as a whole in the general shape of a concave disk of metal. [The typeslugs comprise] alphabets of small and capital letters, and numerals and punctuation and other marks, arranged in concentric circles at the outer ends of the arms, said arms being springs. The types may be of rubber cemented to the metal, or they may be of other material and otherwise attached to the arms, or may be one with the arms …
“By thus arranging the type-disk, a number of disks containing a variety of type may be readily employed on any one machine.” 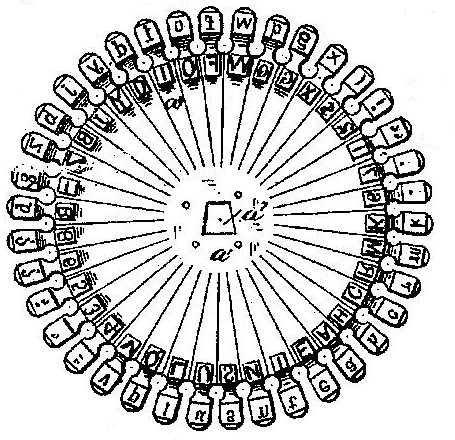 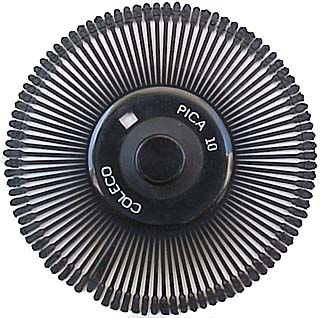 A more modern daisywheel
John Andrew Kaley was born, one of 12 children, in Union County, Pennsylvania, on March 31, 1845. His family moved to Carey, Ohio, when he was still a child. Three days before his 19th birthday, on March 28, 1864, Kaley enlisted in the Union Army’s Signals Corps. He served in the Civil War for two years, later writing of the experience, “There I learned the use and handling of myself. While in camp I made my way through Ray's Arithmetic, a feat performed by perhaps no other soldier of the war.”
After the war, Kaley taught school for a few years then entered the Lutheran Wittenberg College in Springfield, Ohio. On graduation he took up a three-year Theological Seminary course in New England, first at Andover, Massachusetts (later part of Harvard), and the last year at Yale. He graduated in 1875.
Kaley then preached for three years in New England before travelling through Europe, Egypt, Sinai and Palestine. On his return to Carey, he applied for a patent for his typewriter invention. In the late 1880s, while  living in Carson City, Michigan, he patented a “privy [toilet] seat”.
Kaley served Vermilion’s First Congregational Church from 1895 to 1904, then a church in Little Valley, New York, before returning to Ohio and serving various parishes in the state, retiring from pastoral duties in 1908. He settled in Elyria, Lorain County, Ohio, where he continued some preaching on Cleveland radio. He died in Elyria, aged 93, on December 13, 1938. 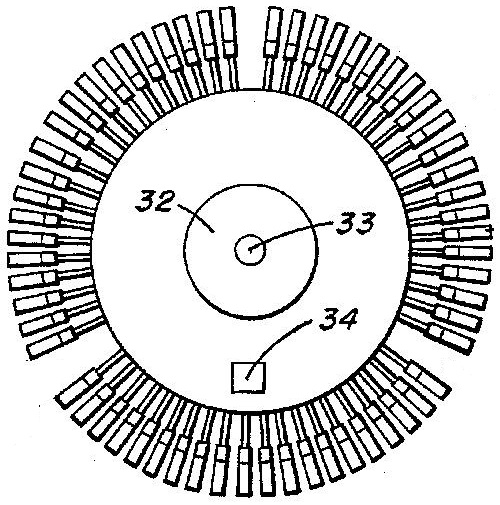 Lowell, 100 years after Kaley
Kaley continued to dabble in inventing into the early 1930s, patenting a paring machine and a shoe stretcher.
Kaley’s typewriter patent, issued in May 1885, was referenced a century later by Herman H.Lowell for his “spoked multiple-wheel printer”. Others to reference it were Ta Cheng Ku and Donald J.Stiles of IBM for a cup-shaped printer and Robert E.Boyden for a single element flexible type drum, both in 1976 (both came under the category of “thimble printers”). In 1987 Roy J.Lahr referenced Kaley’s splitable keyboard. 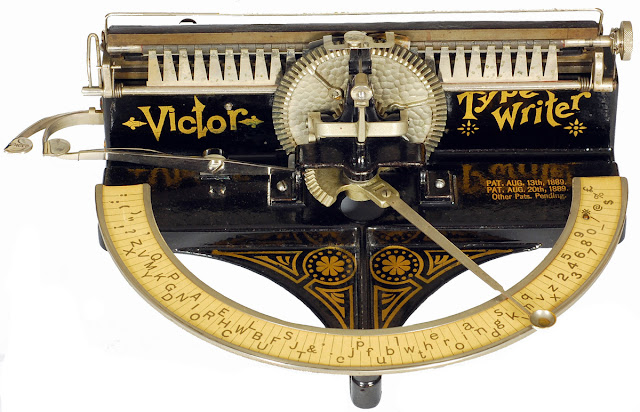 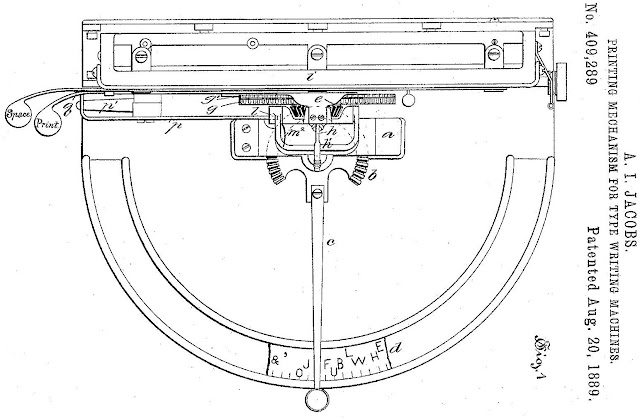 The first typewriter to go into production using a daisywheel was the Victor, which was invented by Arthur Irving Jacobs, of Hartford, Connecticut (1858-1918) in 1888. Jacobs also invented the drill chuck. 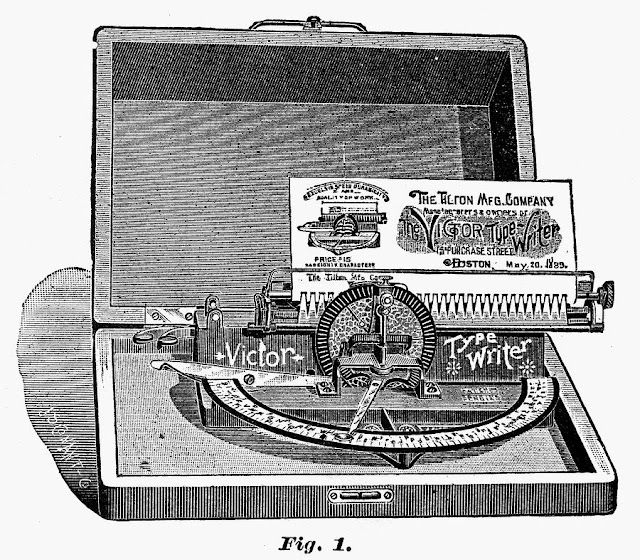 On the Victor typewriter, rubber type was fixed to the inside of the metal daisywheel and was pushed against the paper with a spring-driven hammer on pressing the print key. The Victor had a semi-circular index card. The pointer directly turned the daisywheel when it was moved along the index.

Beijing-born David S. Lee (above) is generally regarded as the inventor of the daisywheel printer. In 1969, Lee and his small engineering team at Diablo Systems developed the first efficient such printer. It was “a quantum speed leap over existing printers which were still using typewriter mechanisms”.  When Diablo Systems was sold to Xerox in 1972, Lee was replaced as head of the printer group and left to co-found Qume. Under Lee's technical leadership, Qume established itself as the industry leader. When Lee and partners sold it in 1978 for $165 million, investors earned a 93-fold return on their original investments. Qume has the distinction of being the first Silicon Valley company to be sold for more than $100 million.  In 1981 Lee became the first Asian-American to enter the corporate suite of one of America's top-five corporations when he was named president of ITT Qume and chairman of ITT's business information systems group. After ITT sold its computing division to Alcatel in 1978, Lee left to start a series of tech companies.
As a child, Lee had left China with his family for Hong Kong and Taiwan before settling in Argentina. Lee went to the US on a student visa to study mechanical engineering at Montana State University. He got his masters at North Dakota State and PhD at Ohio State University. He was named to the board of the regent of the University of California in 1995.
From 1972, daisywheel printing used interchangeable pre-formed type elements, each with typically 96 glyphs, to generate high-quality output printing in electronic typewriters, word processors and computers. Daisywheels are capable of 30 cps (characters per second). They rapidly became outmoded in the mid-1980s with the advent of affordable laser and inkjet printing machines.


THE TYTELLS
Mention of comparisons between daisywheel printing and manual typewriting brings us to today’s eighth anniversary of CBS’s public repudiation in the Killian Documents controversy. The controversy involved six documents critical of President George W. Bush's service in the Air National Guard in 1972–73. Four were presented as authentic in a 60 MinutesWednesday broadcast aired by CBS on September 8, 2004, less than two months before the Presidential Election, but it was later found CBS had failed to authenticate the documents. Subsequently, typewriter and typography experts (including our own Richard Polt) concluded the documents were forgeries. The papers were purportedly made by Bush's commander, the late Lieutenant-Colonel Jerry B. Killian. See Richard's page on the controversy here. 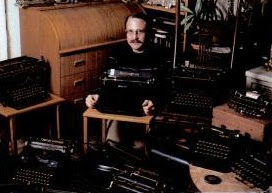 Peter Tytell in 1986
CBS may have avoided embarrassment if it taken advice from New York City-based forensic document examiner and typewriter and typography expert Peter V. Tytell (1945 -).
Tytell was contacted by 60 Minutes producers before the broadcast but not consulted at that time. He told associate producer Yvonne Miller and executive producer Josh Howard on September 10 he believed the documents were forgeries. Tytell later testified to an independent review panel that he believed the documents were most likely produced using Times New Roman font on modern technology and not an Olympia manual typewriter. 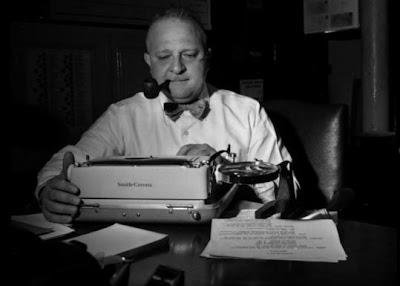 Peter is the son of the famous Martin Kenneth Tytell (December 20, 1913 – September 11, 2008), a man described by The New York Times as having an "unmatched knowledge of typewriters". The postal service would deliver to his store letters addressed simply to "Mr Typewriter, New York". His customers included notable authors and reporters, many of whom had clung to their manual typewriters long after personal computers became standard. The senior Tytell restored the shrapnel-damaged Hermes Baby that had helped Margaret Bourke-White to cover the Korean War.
The Tytell Typewriter Company opened in 1938 at 123 Fulton Street. Martin Tytell was in the typewriter repair business for 70 years. The Tytell Typewriter Company moved to a second-floor store at 116 Fulton Street in 1963 and advertised itself as offering "Psychoanalysis for Your Typewriter."
Alger Hiss was convicted of perjury in 1950 based on evidence that extensively relied on claims that documents passed to Soviet agent Whittaker Chambers had been created on a typewriter Hiss and his wife had owned, after the prosecution showed that the typewriter's unique combination of printing pattern and flaws matched those on the documents in question. Hiss's lawyers then hired Martin Tytell to create a typewriter that would be indistinguishable from the one the Hiss's owned. Tytell spent two years creating a facsimile Woodstock typewriter with print characteristics that would match the peculiarities of the Hiss typewriter. This was used as one of the primary justifications for an unsuccessful appeal of the verdict in the case.
The senior Tytell retired from the typewriter business in 2000 (he died aged 94 eight years later), and his son Peter closed the repair shop in 2001, converting the Fulton Street space for use by the forensic document research business that the family operated. Father and son had developed a method to trace anonymous letters and documents such as wills to their source, using the unique "fingerprint" of each particular typewriter.
See Martin's obituary in The New York Times here. And his obituary in The Economist here.
Peter Tytell featured in the New York magazine in 1986: 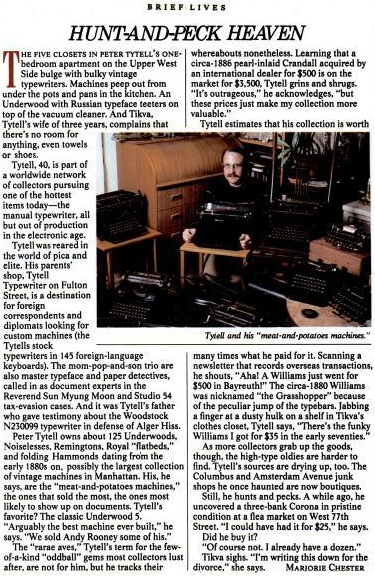 Posted by Robert Messenger at 00:55

Wow - OTDITH is back! Cool!

I like to point everyone's attention to the Elder Tytell's necktie. Bows are the chosen neckwear for architects, dentists, and typewriter repairmen. A bow wontt flop into your work. Also, they look very snappy.

Nice to see this series return!

The first daisywheel looks like quite an impressive invention -- and a keyboard machine, too!

Few people understand what Dylan Thomas is speaking about in line 25 of his famous poem "And death shall haven no dominion", who are not familiar with this typewriter.

It is interesting to see this article on the Tytells. I worked for Martin Tytell at 166 Fulton St. for 3+ years while I was in High School and learned a lot from him about typewriters & document analysis. I remember him working on a Federal case (I'll withhold the names) involving Government watermarks.

I still have a Hermes 9 lb portable Greek typewriter that I bought from him. It is sad today with all the word processors & printers that we have lost some of the "magic" of the typewriter. Thanks for the article.