Oops and Ouch! Sometimes You Just Have to Smile: Typewriters on eBay

As a welcome back to the Typosphere to Adwoa, who said she enjoyed these looks at eBay typewriter listings, I have returned to the subject after some weeks of leaving it alone. It is irresistible. Sometimes you just have to smile.

The other night, when I was preparing a post on my Hermes Ambassadors, I brought a forklift into the house to lift a Remington International and place it beside one of the Ambassadors, to get a photograph comparing the size of these two monster models.
As I had explained to Scott Kernaghan earlier in the week, I've only kept the Remington International for sentimental reasons, since it was the model I used on The Australian, the national daily newspaper, when I first came to Australia from New Zealand in late 1969. 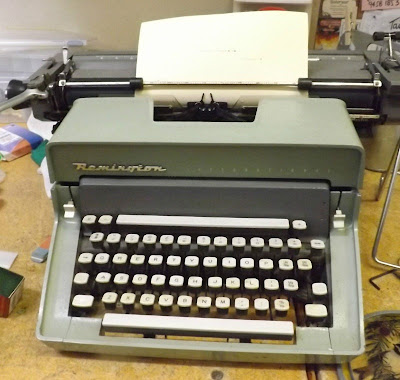 Given the massive weight of this machine, I had to smile when one was listed on Australian eBay yesterday as a “portable manual typewriter”. Yes, I suppose it is portable, and possibly easily portable - if you are the Incredible Hulk!
I haven’t bothered to bring this to the seller’s attention (except maybe through this post). But lately I’ve been more included to question sellers about some listings, rather than just poke fun at them through this blog. 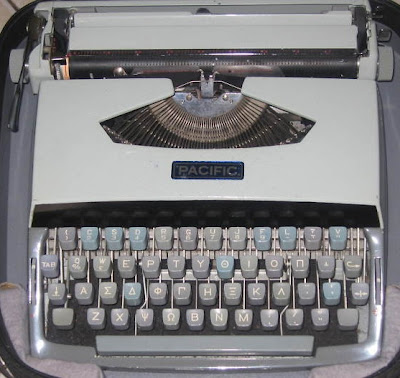 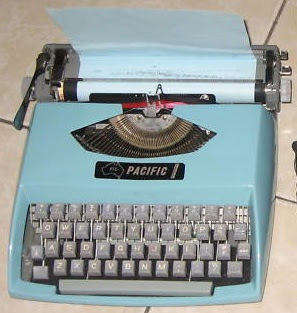 One I simply couldn’t resist was a listing for a Greek keyboard Pacific (Consul). The reason being that TWO different Pacific (Consul) typewriters were shown in the one listing, and I would have been interested in a package deal on both, if the price was right (and they were indeed both for sale). So I asked the obvious question:
Q: You have included images of two entirely different typewriters here. Are both for sale at the one price? If not, which one are you actually selling?
A: No it is Only one typewriter. Why you say that. The pictures are from the same typewriter.
Q: BECAUSE YOU HAVE TWO DIFFERENT TYPEWRITERS PHOTOGRAPHED, A BLUE ONE AND A GREY ONE.
A: The Grey one 1st one. The blue was sold a few weeks ago. Sorry.
The grey Pacific has since been relisted, again for $60. 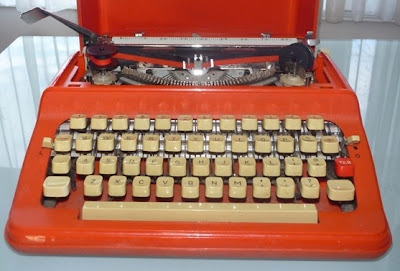 Then there was listing of an “uber [my italics] funky retro portable typewriter” (with, additionally, a “funky case”. Wow!). “In working condition. Makes an excellent display piece. Please use the photos as part of the description.” So, based on this advice, I asked the seller:
Q: Hi. Very interesting description, which doesn't mention the whereabouts of the ribbon spool cover. Nor why the spools you have there aren't fitted on to the capstans. Any reason?
A: Didn't realise the top was missing. [What the ...? ] The spools are just not put on properly in the photo. Item removed and will be relisted with missing top mentioned." 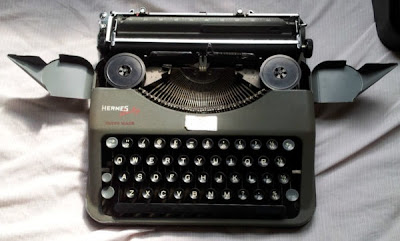 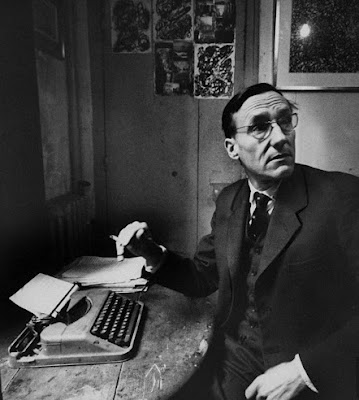 Lately there have been some laudable attempts to sell typewriters on eBay on the strength of the authors who used these models. But buyers aren’t buying it. This Hermes Baby has been listed twice now for $80 with no bites so far. The hook is, “You could be like William S. Burroughs with this machine! Wow!” (Seller's 'Wow', not mine). An image of Burroughs using a Baby was included in the listing. Shades of J.B.Priestley and Imperial! 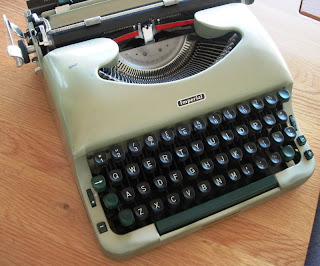 Talking of Imperials, this IGC 5 sold for an impressive $122.50 after 22 bids. The seller wrote, “I can easily see Joan Holloway (from Mad Men) or Miss Moneypenny typing up a report on a weekend with one of these. Actually, if you watch To Sir, With Love (1967), you'll see one just like it in Sidney Poitier's flat.
“The beauty of typewriters is that they were built to last, and when you write on one of these, you have no distractions from e-mails, Facebook updates or other online noise. You just sit down ... and start writing. They require a little more concentration and discipline, since there's no delete key, but as soon as you start writing, it starts printing. Very Zen.”
Fair enough, too. 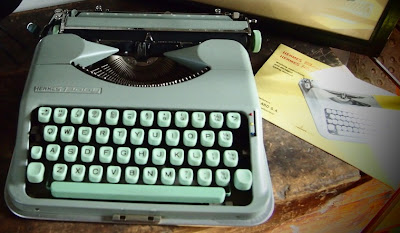 A Hermes Baby which did sell fetched an amazing $224.61 after 49 bids. But, then, it was “atomic” and “funky”, weren’t it?
Another new line for me was this explanation as to why the typebars jammed at the printing point on a Majestic (an Australian relabelled Nakajima ALL). “It seems to work, but some keys get stuck at the top. Maybe it has something to do with the ribbon, as it needs a new one.”
Sticky ribbon, maybe? 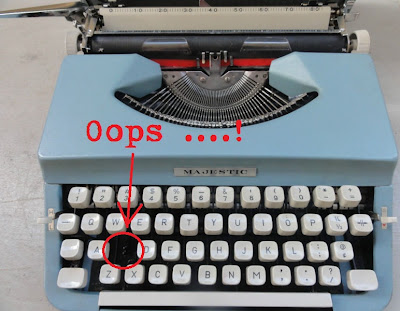 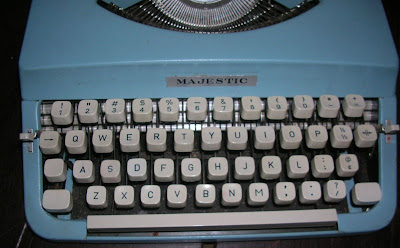 Anyway, the Majestic sold for $33.10 after four bids, One early bidder had had to foresight to ask, “I am concerned that it may not work? Does the ‘S’ button work even though it is missing, as I am after a fully functional working typewritter [sic] :).” The answer came back: “I didn't realize the 's' button that it had fallen off. I have listed some more pictures for view.” Oops …!

This SCM’s seller says, “It is missing the number 6 key otherwise it comes in very good clean condition.” Except you can’t type 6. 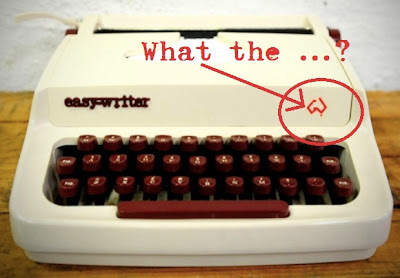 This relatively modern plastic Easywriter toy typewriter was listed as a real “vintage” typewriter, at $40. It didn’t sell. Interestingly, the seller did point out it was Japanese-made, yet on the front it has the “Made in Australia” symbol. No typewriters were ever actually made in Australia. How did the manufacturers get away with it, I wonder.
Given my previous post, about an overload of typewriters in the house, I have been giving some serious thought to going into the typewriter sales business. But after the sale of the FuNkOMaTiC turned sour (more on that later), I’m not inclined to do it through eBay. Nowadays an eBay seller has no comebacks against rouge buyers whatsoever. The secret would be to advertise typewriters through some other online outlet, such as my own website (in the style of the Vintage Typewriter Shoppe).
Anyway, while I ponder these possibilities, the prices some typewriters have been getting on eBay have been hugely encouraging. 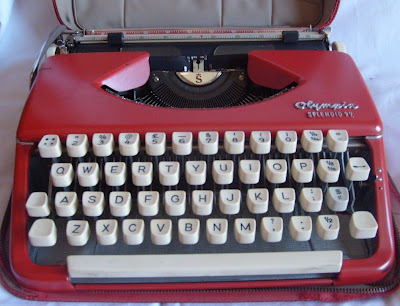 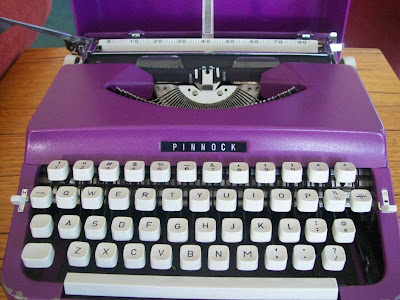 This purple Pinnock (Nakajima ALL) has $88.15 on it after nine bids with more than a day still to go. 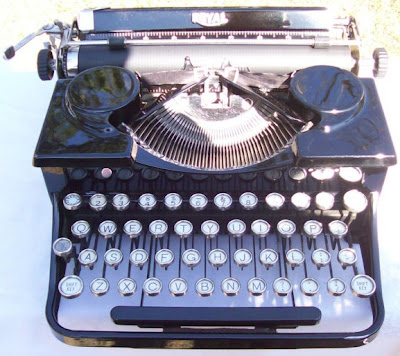 Derrick Brown is still selling beautifully presented machines, but there are no bids yet on this Royal at a reasonable $220. 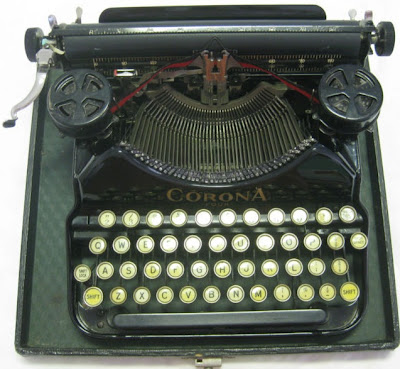 On the other hand, this nice Corona 4 already has attracted four bids and is up to $152.20. 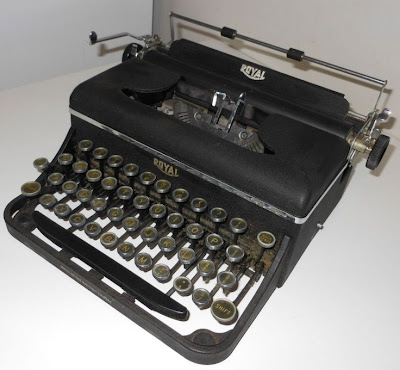 Meanwhile, this Royal is listed for $360, apparently on the strength of the fact that in the US the same machine is listed on eBay for $815. Maybe on my.Typewriter.com, although I doubt even that. But if you were to buy one at such a high price from Charles Gu, you would be guaranteed it would arrive in near-perfect working condition (as you would be from me). 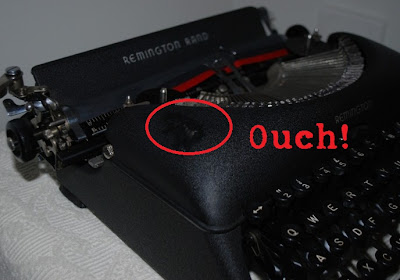 This Remington is listed for a staggering $350 with a very badly repaired (“scratch”) chunk out of the ribbon cover. Unlike the Remington International, it is apparently a “heavy typewriter”. 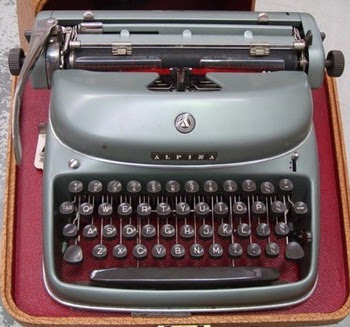 Also, this Alpina is still patiently awaiting a buyer, at an optimistic $499.
What I won’t be doing is ripping off buyers through inflated postage costs. The other day I won an Adler 7 thrust-action typewriter, and the seller wanted $45 to send it by courier. I insisted on arranging my own courier pick-up, for less than half that price. 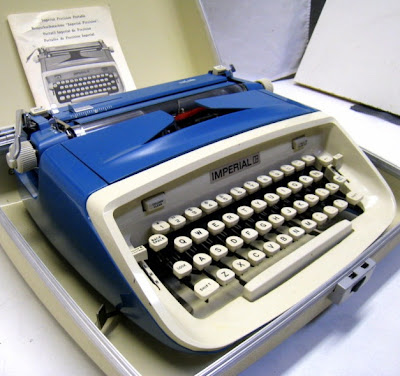 This Imperial Safari is being sold “for parts” because the space bar apparently doesn’t work. Yet the asking price is $90 plus $45 for “express shipping”. Experience informs me “express shipping” is nothing of the sort, just a way of adding to the price of the item. eBay has much to answer for in the way it calculates shipping costs. 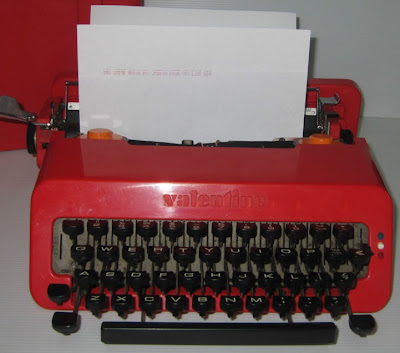 Someone is trying to sell this Olivetti Valentine without a front section for $77.99, also “for parts”. The seller is probably unaware that this is precisely the sort of design Ettore Sottsass originally had in mind, something much more akin to the Remie Scout (not for sale, yet). 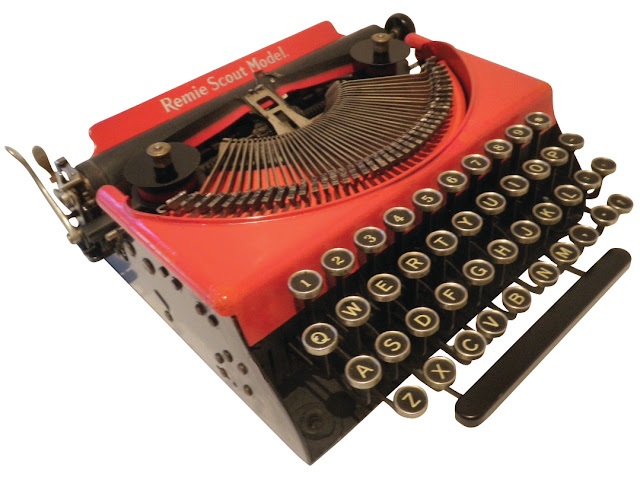 A post in my honor, how lovely! So very sweet of you, Robert, I am also hard at work catching up on your whereabouts over the past few months and I wish you the very best in your future endeavors!

You bring up some interesting points - the "sticky ribbon" is funny, but I have another theory: maybe it is magnetized!

Sorry to hear you had a bad experience with the FuNkOMatic (hope I wrote that right). Do share when you are able so we can learn from your experience.

I think you would be great at typewriter sales if you can bring yourself to part with some of your collection! You have a ripe market in Australia, if the interest in typewriters on Australian eBay is any indication... the buyers will appreciate having someone who is knowledgeable, honest, and offers reasonable shipping rates. A dedicated website sounds like a good idea, too, with fixed prices. If VTS's "sold" tags are anything to go by, customers will indeed turn up.

I was stunned.... STUNNED by the price that the Hermes baby went it, when I saw it. It was absurd.

They are a great little machine, but not worth THAT much.

And yes... I do recall that conversation. it is one heck of a pig of a machine. I also saw the 'portable' listing, and thought..... 'WTF'?

Whenever I want a good laugh I do one of 2 things, 1/ Watch a DVD of Keeping Up Appearances or 2/ browse Ebay typewriter listings.

wow many of those are 10-20x by max. did the funky typewriter sale fall through because yak transport was too expensive?

I was unaware that the FuNkOMatic sale went sour. Sorry to hear about that, Robert.
There really are some funny listings to be found on eBay, along with some ridiculous asking prices. Nice to see that it isn't just in the US.